This month, we have been participating in the 30 Day Giving Challenge, and we have had some neat opportunities to serve as a family. This past week, we had an opportunity to learn about giving in a unexpected way. 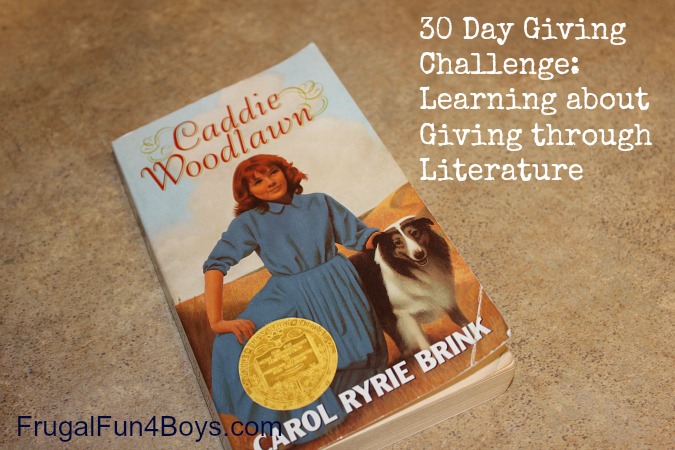 We have been reading Caddie Woodlawn (affiliate link) as part of Aidan’s history curriculum (Sonlight American History, Part 2). It is a very enjoyable book, and Gresham and Owen have been listening in for this one. If you’re not familiar with the story, Caddie Woodlawn is a young girl growing up on the Wisconsin prairie during the 1860’s. Carol Ryrie Brink based the book on real events that happened to her grandmother (the real Caddie Woodlawn). Early in the book, Caddie is given a silver dollar by her Uncle Edmund. That is quite a bit of money, and Caddie chooses to save the silver dollar for just the right occasion. She often dreams about what she will buy with it.

One day, a rumor spreads through her community that the Indians are getting ready to raid. Nearby settlers camp out at the Woodlawn farm as they wait for the Indians to attack. The Indians don’t attack, and the settlers eventually return home. A few days later, the children are at school when an Indian woman enters the school house. She is the mother of three boys who are attending the school, and she has come to say goodbye to her children. She is leaving them with their father (a white settler) while she goes back to her people who are moving farther away from the white settlers because of all the unrest. Caddie observes the sadness of the mother and the grief of the three boys. That night, she lays awake thinking about the boys, and then she has an idea. She puts her silver dollar in the pocket of her school dress for the next day. After school, Caddie takes the three boys to the store and announces to the storekeeper that she is planning to spend the whole dollar on these boys!

The Little Hankinsons looked on in amazement. The black mood of despair which had enveloped them all day had turned into wonder, and now wonder was rapidly giving way to incredulous delight. Candy! Tops! No one had ever bought such things for them before.

“Well, Miss Caddie, that comes to thirty cents,” said Mr. Adams, when the bewildered boys with the help of Caddie had selected the candy and tops.

They were grinning from ear to ear, and Caddie thought that, with so much money left to spend, she had better be a little wise. “I’d like to see some combs now, if you please. I’d like three small ones if they aren’t too dear.”

“Here you are, my girl,” said the storekeeper, bringing down a dusty box from the shelf. He was smiling too, by now, and almost as eager as the little Hankinsons to see what Caddie would buy next.

“I think,” said Caddie, presenting the three combs, “that your mama would like you to keep your hair combed and tidy, and it will be more fun if you’ve got combs of your own.”

Discuss Biblical principles as they occur in everyday life.

This chapter sparked a great conversation with my boys. I asked them if they thought that the Bible was true when it says that it is “more blessed to give than to receive” (Acts 20:35). Later in the chapter, one of Caddie’s brothers asks her why she didn’t just buy the boys a couple pieces of candy and keep the rest of her dollar for herself. She answers that it had to be all of it. I asked Aidan why he thought she felt that way.

Generosity is something that can’t be forced. I can require my children to make their beds and pick up their dirty clothes, but I can’t make them have a generous spirit. However, I can look for opportunities to demonstrate to them the truth of God’s Word and the fact that we are blessed so much more by giving than we are by receiving. I was thankful for a way to discuss generosity in the midst of a book that we were all enjoying already – it was a natural discussion of Biblical truth without being “preachy.”

Yesterday, we went out to a shopping center to look at the Christmas lights. I told the boys before we went out that we would be going to the toy store, but that they would not be shopping for themselves. Instead, I asked them to observe what their brothers liked and to come home with one idea in mind that they thought they would like to buy for their brothers. They could whisper it in my ear when we got home. Owen (age 3) only looked at what he wanted to buy for himself – no surprise there! Gresham (6) did some of both. Aidan (age 9) came up and said, “Mom, they’re both just shopping for themselves, but that way I’m getting some ideas of what they like! I’m sneaking up behind them and listening to what they like!” And then he came up with a fantastic idea of what he could buy Gresham. By the time we came home, Aidan and Gresham were whispering together about an idea they had for me and trying to figure out how they could earn enough money.

We’re almost to the end of the 30 Day Giving Challenge! If you have participated this month, I’d love to hear how you have been blessed by giving and serving others!