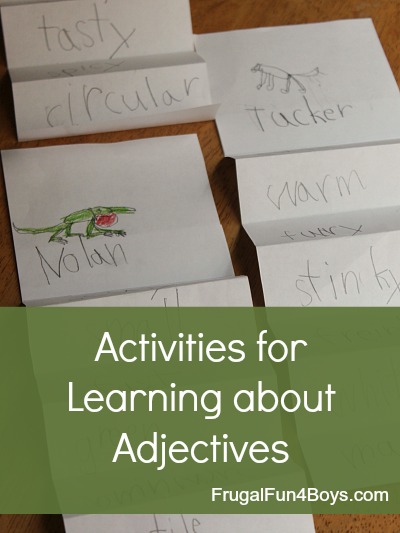 We have been learning about adjectives in our homeschooling! So far this year, Gresham (2nd grade) has studied nouns, pronouns, and verbs. Adjectives proved to be a little more abstract, but a couple of hands-on activities helped quite a bit.

When we first read about adjectives in Gresham’s book, he understood the concept of describing something. I asked him to describe Nolan, our pet anole lizard. He came up with “has four legs” and “has a tail” and things like that. I needed a way to help him think of an adjective as one word that describes a noun.

(For any of you who care, “Nolan has four legs” would actually be a predicate noun (legs) with four being an adjective that describes legs. I am really not a grammar person, but I happened to have just learned this in Aidan’s grammar book!)

I cut a piece of paper in half lengthwise and then folded it accordion style. Gresham wrote the word that he would be describing at the top, and then one adjective in each section. This worked really well! 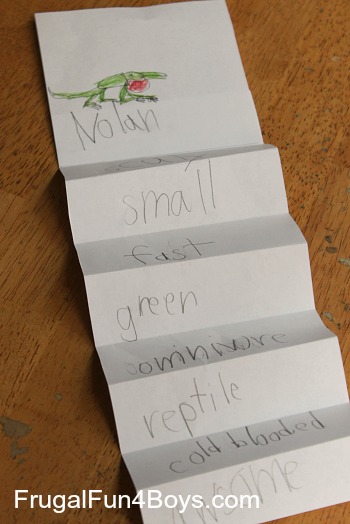 Gresham did three of these – one for Nolan the lizard, one for our dog, and one for pepperoni pizza. For the pizza, he came up with adjectives like “hot,” “cheesy,” and “delicious.” 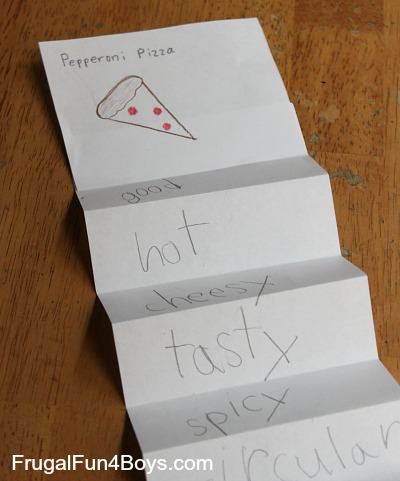 Another day, we used a touch and feel activity to practice coming up with interesting adjectives to describe things. I filled 8 paper bags with items from around the house, and Aidan and Gresham both went down the row of bags, felt what was inside each one, and then wrote down three adjectives to describe what they felt. The items I used were some feathers, a fleece glove, some jingle bells, a baby wipe, a smooth rock, a hole punch, a toy dinosaur, and a cookie cutter. 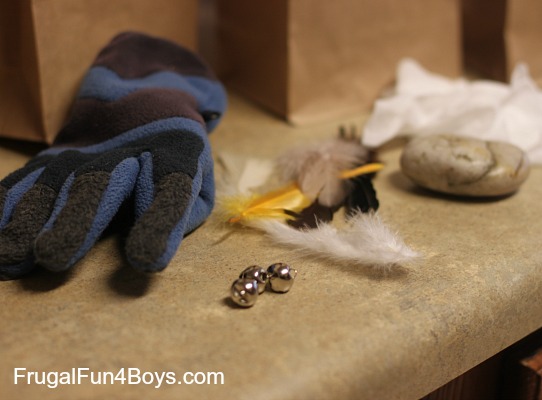 I asked Aidan (age 10) to focus on thinking of really vivid descriptive words. At fifth grade, he needs to be moving beyond basic descriptions. This activity was a great success! Something hands-on always helps break up the monotony of a grammar book, and Owen (age 4) was able to participate too by just guessing what the items were.

Next, we’ll probably learn about adjectives with Schoolhouse Rock. Anyone else remember those goofy songs from Saturday morning TV in the 80’s? 🙂