I can’t believe that it’s time to think about Christmas shopping already! We’re planning to keep Christmas gift-giving very simple this year because of a job transition and a time of low income during the training period at my husband’s new job, but really that will be alright. Gifts are fun, but they are not what makes Christmas happy or our children happy (despite what retailers would like us to think!). I’m hoping to put together a post soon with homemade gift ideas, but I also wanted to share our suggestions for simple toys that boys love.

It seems like the boys section at most major stores is a major disappointment! (And maybe the girls section is too, I’ve just never looked.) Our local Target, for example, is full of aisle after aisle of cheap (and ugly) action figures that break quickly. Not a lot of quality, and not a lot of open ended play options. 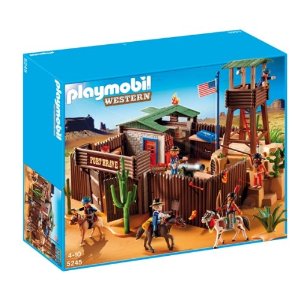 If you want to get away from poorly made and ugly action figures, Playmobil is a great way to go! My boys are really enjoying the western themed sets right now. Aidan, Gresham, and Owen all received western Playmobil for their birthdays this year, and now they have enough toys to set up some awesome scenes! If you have multiple boys, Fort Brave is a great way to get started because it has plenty of guys (both soldiers and Native Americans) and horses. The retail price is $150, but I’ve seen this fort on sale at Toys R Us for 20% off. They seem to rotate which Playmobil sets are on sale, so if it’s not the western this week, they may be on sale another week. As far as smaller sets go, we have the covered wagon, cowboys, Native Americans and teepee, Union soldiers, and Fort Eagle. Amazon’s prices on some of these sets seem a little inflated, so ordering directly from Playmobil might be a better option.

I would recommend Playmobil for ages 4 and up. For preschoolers, check out the Playmobil 123 sets. These toys are adorable and very well made! Owen owns a few sets with the and push and pull train being our favorite. 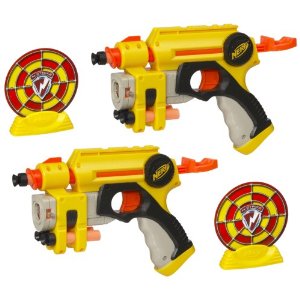 Simple is definitely better when it comes to Nerf weapons. Aidan has purchased two really big Nerf guns over the years, and both of them broke fairly quickly. The ones that the boys keep going back to are the basic N-strike guns. They’re lightweight and easy to use, which is a plus when you are running around the house! We’ve found that a 2 year old can shoot the guns, but they really can’t cock them on their own until age 3 1/2. The Nerf Reactor (which shoots balls) is also a lot of fun. Another tip – if you’re just getting started on Nerf, don’t forget to buy a gun for Dad! He’ll want to get in on the fun! 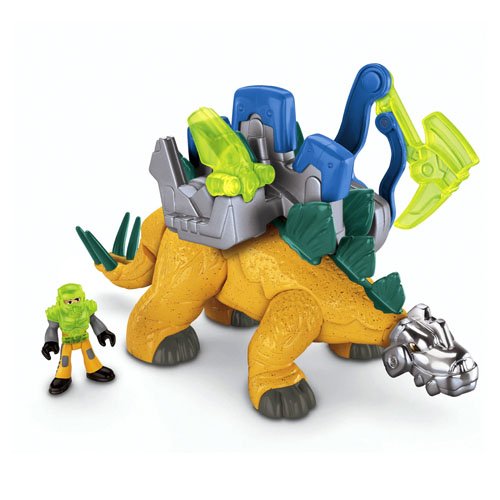 Gresham (our dinosaur fan) owns a few of the Fisher-Price Imaginext dinosaurs. We have had a few accessories break, but the dinosaurs themselves are very sturdy compared to most toys on the market these days! He got the stegosaurus for his birthday, and it’s a great toy.

You really can’t go wrong with building toys for boys! Obviously, there’s Lego and Duplo, and who could live without those? Here are a few other building sets that we suggest. 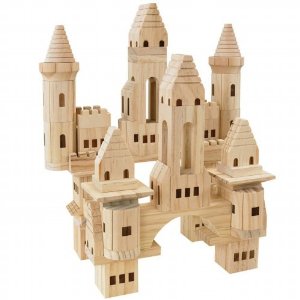 Gresham received these Treehaus Castle Blocks last year for Christmas, and everyone enjoys playing with them.

The boys also love Fisher-Price Trio building sets. They work well as gifts for ages 3-7, and Aidan still plays with them at age 9 (although not as much as the younger boys do).

We also recommend Tinker Toys (the wooden version) even though we have had several pieces break. They are so open ended and have provided hours of fun. Aidan has built everything from catapults to Star Wars droids with them! The Amazon price on this set I linked to is outrageous – I’m not sure what the deal is there! I think I paid under $20 for that same set at Target a few years ago.

when Aidan was 3, and the boys still play with them daily! Owen constantly carries around a black bear and a gorilla. We’ve used our Schleich animals as pretend pets, made up stories about them in the yard, and set up countless zoos! 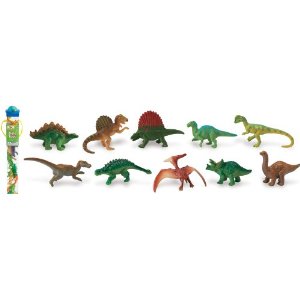 We’ve recently gotten into the “Toob” animals by Safari, and they are fantastic as well. Gresham loves the dinosaur toob.

If you don’t have any of the Seeds CD’s, those would make a worthwhile purchase this holiday season. Seeds Family Worship is Scripture set to music. There are seven volumes to choose from – Seeds of Faith, Praise, Purpose, Courage, Character, Encouragement, and the Character of God. We own four of them, and are planning to collect the rest! The boys love to listen to them in the car, and I love the fact that it’s Scripture memory (NIV version) and that the music is enjoyable for adults and not just kids. I would recommend getting started with Faith or Praise. Click the banner below to go to the Seeds Store (affiliate link):

Aidan is starting to outgrow the toy stage at age 9. Here are a few ideas for older boys:

I’m planning another post with homemade gift ideas to be coming soon! What are your favorite toys for boys?

All links in this post are Amazon Affiliate links (other than Seeds Family worship, which is also an affiliate link), and I will earn a small percentage of the sale if you order through my link. I’d recommend shopping around for the best deals, but if you’re going to order from Amazon, I’m grateful for your purchase through my link!