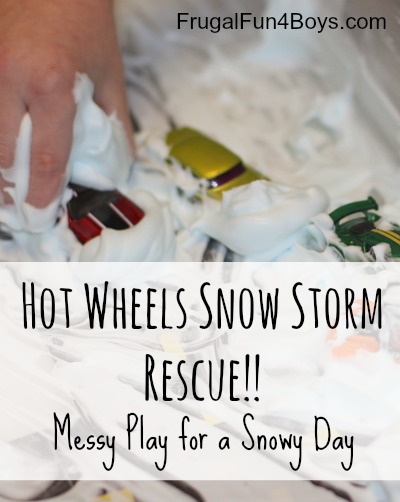 Last week, the plan on Thursday was to go to the aquarium with friends who were visiting from out of town. Instead, we had icy roads, a surprise snow storm, a frozen pipe in the kitchen, and a dead mouse under the oven (in a trap, thankfully!!!). Sounds like a great day, huh? Well, the boys did a pretty good job of handling the disappointment of rescheduling the aquarium trip. Our friends were able to come over to our house for the morning, I got the pipe thawed with a space heater, and we brightened up the afternoon with this activity.

I emptied the three ingredient snow dough out of our large plastic tub (it was still fresh, by the way!) and used construction paper to make some roads in the bottom of the tub. I covered the entire bottom of the tub with mailing tape to seal it. 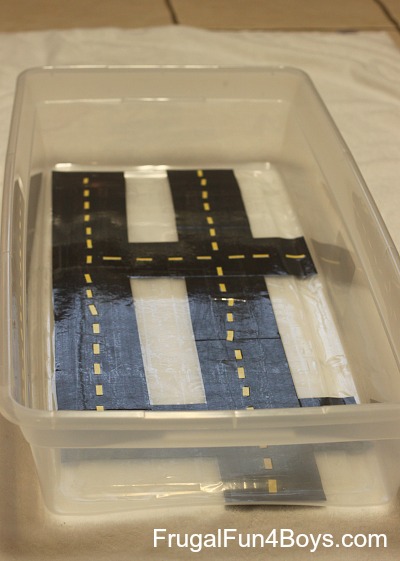 I spread out our biggest beach towel on the floor under the tub to contain the mess. Then I squirted shaving cream all over the bottom of the tub and told the boys to get out their Hot Wheels cars and go for it!

They had a great time creating stranded car scenes in the snow. 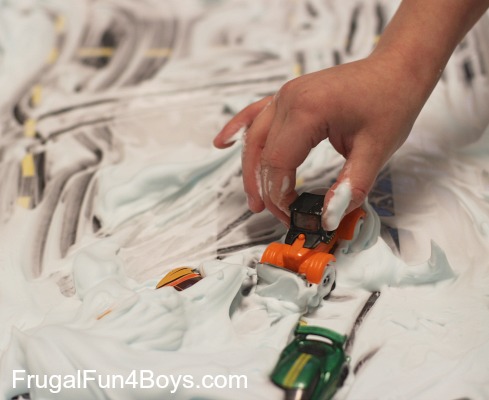 This is not a mess-free activity. Owen and Gresham both needed clean clothes when they were done. But as far as a fun way to cheer up a dreary day, this was a big hit! (Owen just walked by while I was writing this post and said, “Ohhhh, that was FUN!”) The towel on the floor was a big help. When they were finished playing, I just rolled up the towel and threw it in the washing machine along with the shaving cream clothes. 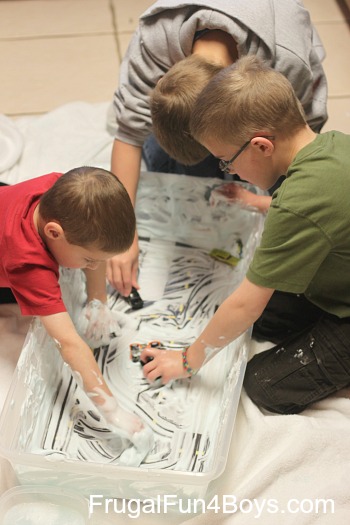 We did this during Jonathan’s nap (he’s 2) because I just couldn’t handle his level of mess, especially since I’m 6 months pregnant and bending over is getting tough! I’m going to let him play this in the bathtub, however. We’ll just let the plastic tub float in a few inches of water, and all the mess will be contained!

Another idea – toy animals in the snow. Gresham wants to play that next. But first, we have to buy Daddy some more shaving cream! Ha!