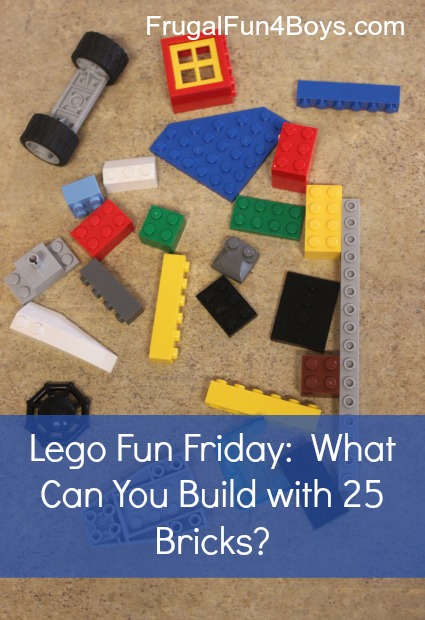 It’s time for LEGO® Fun Friday! If you’re new to Frugal Fun for Boys, LEGO® Fun Friday is a twice-a-month feature. Each time, I post what my boys built for the building challenge, and then announce a new challenge for the next LEGO® Fun Friday. You can participate by linking up a LEGO® post (any post is fine – building challenge posts or any LEGO® activity or birthday party idea, etc.) or by sharing photos of what your children built on the Frugal Fun for Boys Facebook page. Last time, we did photos of funny minifigure scenes – it was a lot of fun!

The building challenge for this week was to have your child select any 25 bricks (pieces like flat bricks and wheels included) and then to see how many different things they can build using those 25 pieces. Not all 25 pieces need to be used, however.

Gresham built a car with a jump for his car to drive off: 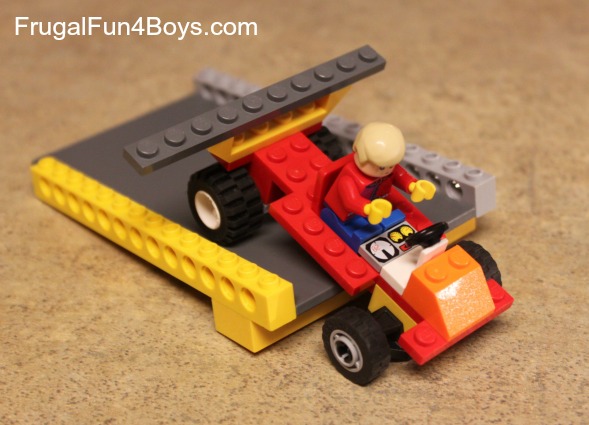 Then he took that apart and built a flying vehicle: 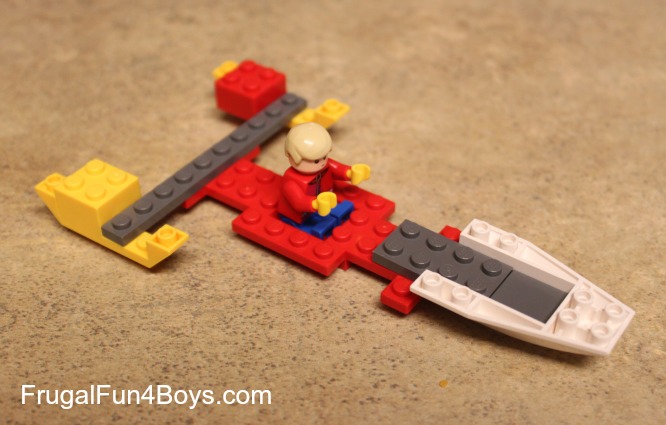 Aidan made a “moveable diving board:” (You never know when you might need one of those!) 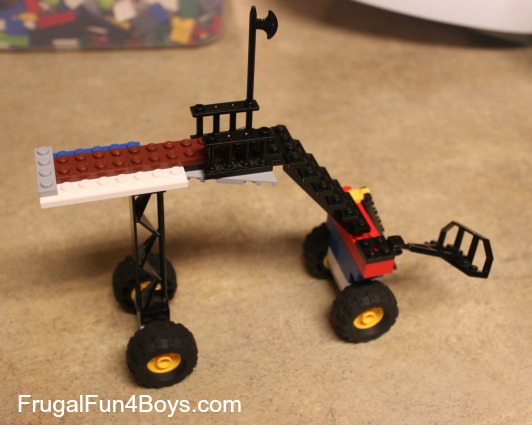 And then he built a vehicle: 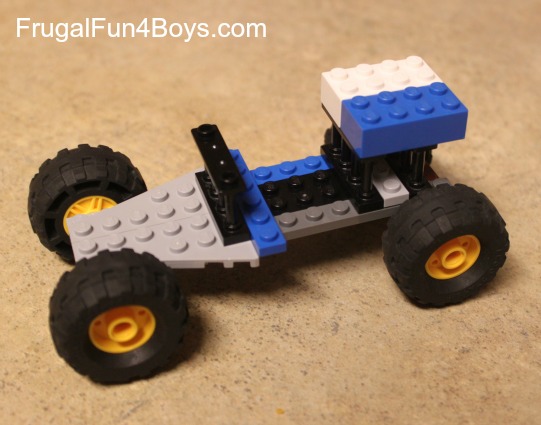 Mom’s Thoughts: It was hard for my boys to stick with 25 bricks! I made them do at least two designs with just their 25 bricks, and then they could expand from there. I think it’s good for them to scale back sometimes. Sometimes (and this is true with any toy – not just LEGO®’s) having a whole pile of things to play with makes them restless and unable to focus. Three hotwheels cars can be more fun than 20, etc. When they had just a few LEGO®’s, they ended up being more creative, which led to everyone being really focused on their creations even after they had the whole tub of LEGO®’s back again!

A couple years ago, we went to a LEGO® store that had an awesome brick wall. The older boys each purchased a container of parts for a set price. Then, they played with those little containers of bricks over and over in the coming weeks before finally mixing them in with our other bricks. Using a small container to make an on-the-go LEGO® set can be a great way to encourage creativity and give kids something to do while running errands.

But first, the next LEGO® Fun Friday will be Friday April 12th. The building challenge is to build a balloon powered car. We were inspired by this post on The Crafty Mummy, and we want to give it a try! If you want to add some math and science to the challenge, have your kids try different designs, and see which car travels the farthest.