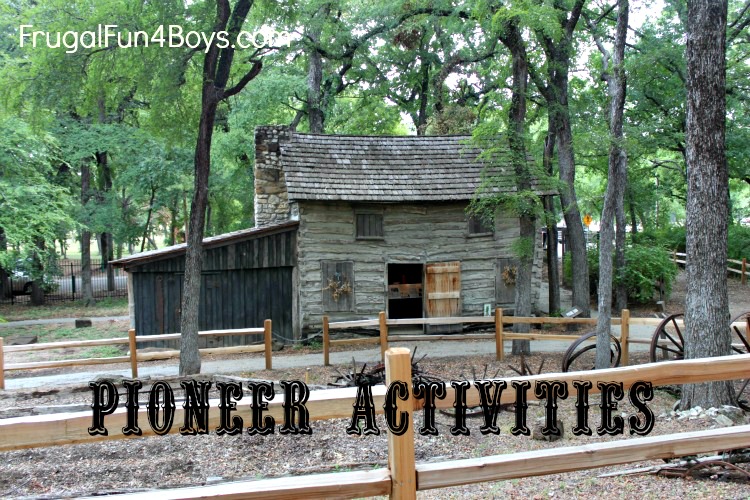 We’ve been having so much fun studying wagon trains and the American frontier in Aidan’s history this year (Sonlight Core E)!  In fact, we are just about to start studying the Civil War, but I decided to linger a little longer on the American west before we start that.  There’s so much excitement for little boys in this time in our nation’s history – living off the land, panning for gold, cowboys, Native Americans, building log cabins, and riding a horse with a rifle on your shoulder. What more could a boy want?

Here are some of the things we’ve been doing: 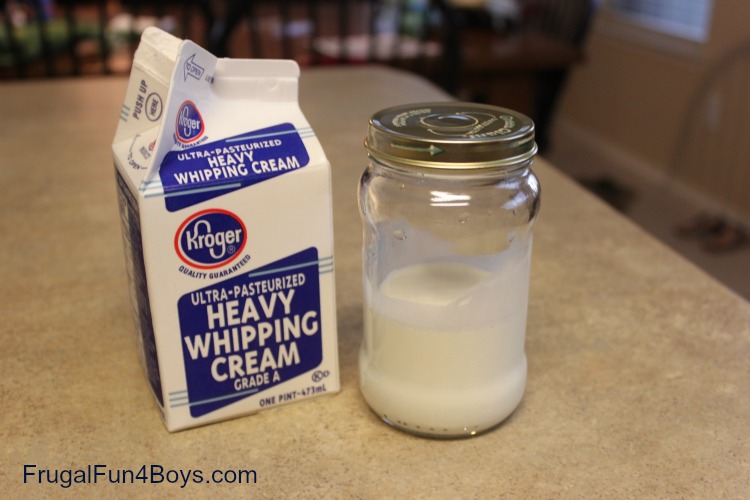 Making butter is so easy, and the boys were so impressed!  To make butter, all you need is heavy cream and a jar with a lid.  Or a butter churn.  But if you don’t have one of those lying around, you can use a jar!

Screw the lid on tightly and shake the jar.  Shake and shake and shake.  We actually timed ours – it took 8.5 minutes to become butter!  The cream will become whipped cream first, and it will feel like you’re not accomplishing anything because it gets all fluffy and fills up the whole jar and doesn’t make noise anymore when you shake it.  But keep going!  Suddenly, it will become a hard lump of butter with liquid all around it. 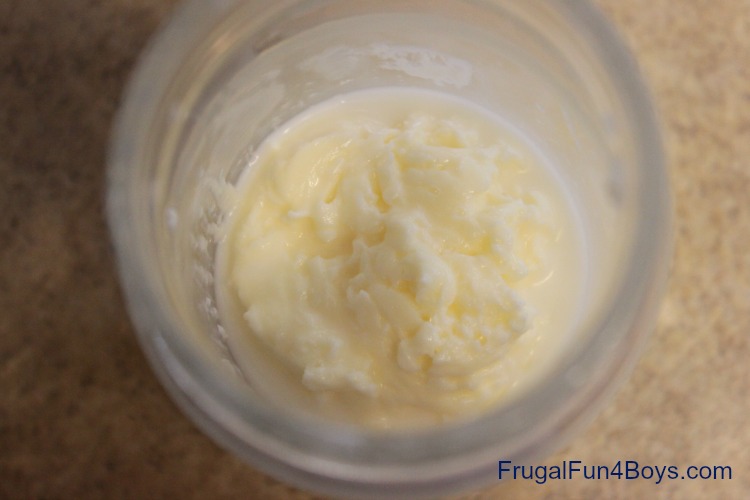 When it was done, we poured it into a sieve to strain out the buttermilk – the liquid that is left over after the butter separates out. 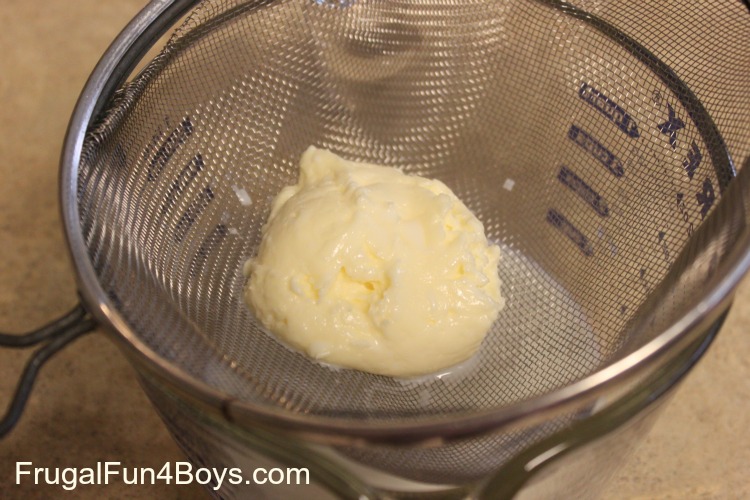 We added salt and mixed it in.  The butter was so soft and creamy, and it was delicious on bread!   There’s something satisfying about doing something yourself that you normally buy from a store. 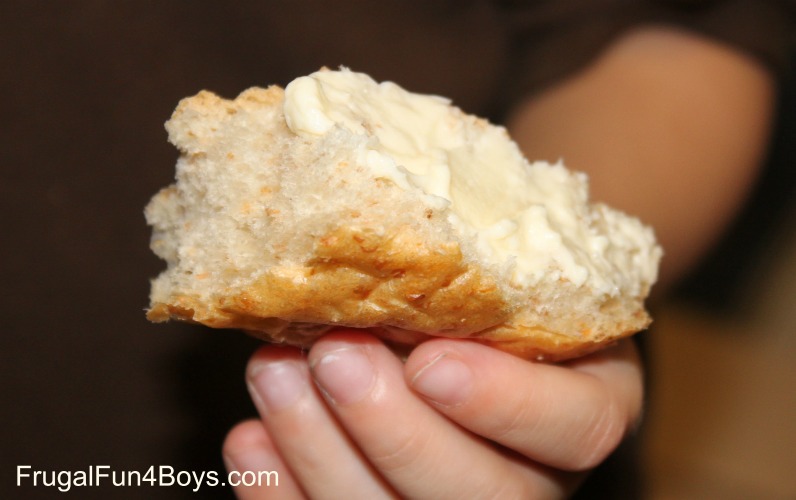 Check out this post on Maple Sugar Snow Candy from Creekside Learning for another pioneer treat to eat!

Also check out Ticia’s post at Adventures in Mommydom on what to bring in your covered wagon – she has a link to a printable activity on what to pack in the wagon.  Fun idea!

Read Aloud:  Moccasin Trail (with Playmobil scenes from the book!)

Our first Sonlight read aloud for the year was Moccasin Trail by Eloise Jarvis McGraw.  My first impression of this book was that it was hard to read out loud – it has some slang and a few words whose meaning is not readily apparent from the context, which makes it difficult to read.  However, I’m glad that I stuck with it!  The story is exciting and has led to good discussions.  The main character, Jim, is a boy who ran away from home to be a trapper with his uncle.  His uncle died, and Jim was wounded by a bear.  He would have died if he had not been rescued and cared for by Crow Indians.  He spent 6 years with the Indian tribe, and then trapped beaver for 3 years until the beaver were gone.  Then, he receives a letter from his brother.  His parents have both died, and his siblings need his help claiming land in Oregon territory.  Jim has not seen them in nine years, and he struggles with the clash of cultures.  He is accustomed to an Indian way of life, and his siblings are afraid of his new ideas, and rightly so, for Jim now values things like stealing horses (something the Crow Indians pride themselves on).  I won’t give away the ending, but it’s a good book!

At one point, Jim’s family crosses a gorge with the wagon on a raft.  Aidan built this scene out of Playmobil while I read: 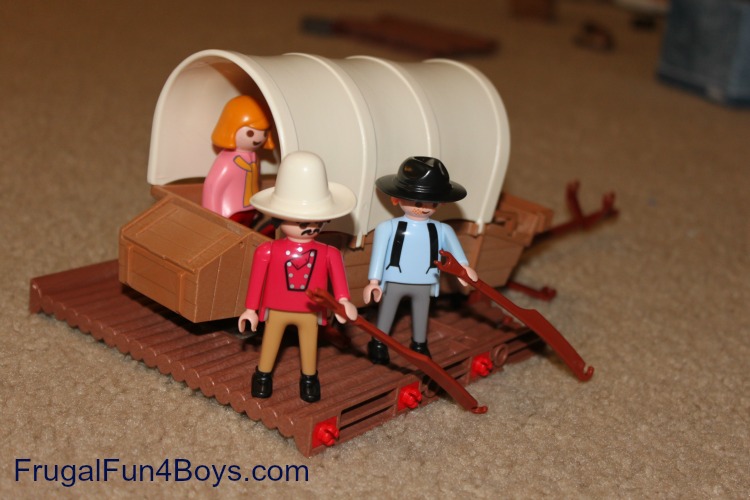 Jim and his younger brother had to bring the cattle across since they could not ride on the raft:

We bought Owen some Western Playmobil for his birthday in May, and Aidan got some more pieces for his birthday in July.  These toys are definitely on the expensive side, but I think they are worth the investment. They are well made, and the boys play with them daily.  Owen sleeps with his Indian figures!  Aidan enjoys setting up entire scenes from history.  The other day, we made a western town and an Indian village with a river running between them – made from a blue blanket lined with real rocks on the “banks!”  We have Fort Eagle, several Indian figures, a teepee, a covered wagon, cowboys, Union and Rebel soldiers, and extra horses.  Aidan has the Take Along Western City and the gold mine on his Christmas list!

Anyway, back to the book… I would recommend Moccasin Trail for kids age 9 and up.  For younger ones, I would suggest the Little House books as a better real-aloud option, especially Farmer Boy if you have boys.  Aidan read Little House on Rocky Ridge last year in Sonlight, and he liked that one as well – it’s part of the Little House series, but not written by Laura Ingalls Wilder.

Check out Part 2 of our Pioneer Unit Here

All links in this post are Amazon Affiliate links, so if you shop through them, I will receive a small percentage of the sale.