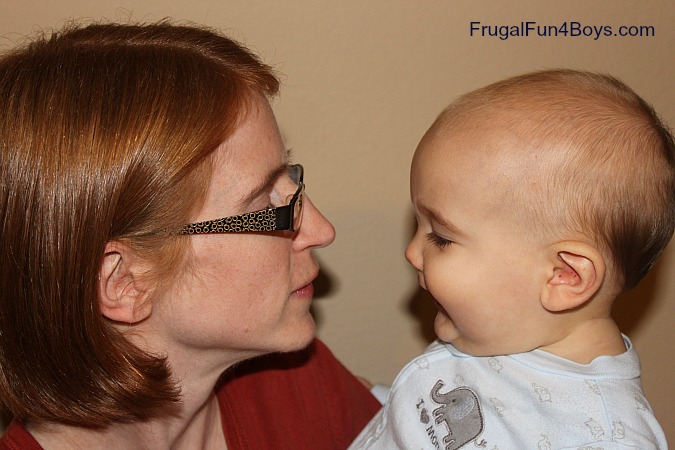 Last week, I presented a challenge for us as moms to set an example for our children in godly speech. I was so encouraged by how many of you responded! So let’s check in – how did your week go?

Mine was not as good as I would have liked it to be. Obviously, habits of speech take more than a week to change, so this challenge was just a starting point. I will definitely be continuing on from here. I think that the initial stage of trying to break a habit actually seems worse because I have a heightened awareness of the behavior I am trying to change.

As I reflected back on the week, I realized that there were two problem areas:

1. I struggle with speaking kindly to my children when we are in a hurry or when I am under pressure to get things done. To help remedy this, I am working to keep our life simple and free of unnecessary commitments. Taking care of four children under the age of 10, keeping up with the house, and maintaining a quality relationship with my husband is a full-time job as it is. I don’t need a lot of other commitments. But at the same time, part of my problem here is pure selfishness – wanting the house to look the way I want it to, wanting to get done what I’d like to do rather than deal with yet another temper tantrum, etc. I need to be willing to love my children just the way are at the stages they are at. I also need to be willing to spend my time and efforts the way God wants me to spend it.

2. I also realized that I have been allowing one of my children to be a manipulator, which leads to frustration and anger both on my part and his. I pulled out a book from our shelf that has been very helpful in parenting: The Heart of Anger by Lou Priolo. I highly recommend this book for all parents, not just parents of children who have a problem with anger. Priolo addresses not only Scripture and Biblical principles for instructing our children, but also ways that parents may be contributing to the problem. In his chapter on disrespect and manipulation, Priolo instructs parents not to “answer a fool according to his folly.”

“Do not answer a fool according to his folly,

Answer a fool as his folly deserves,

That he not be wise in his own eyes.”

It is so easy to get sucked into arguing with a manipulative child.

“Please stop hitting your brother with that light saber.”

“I’m not bothering him. He likes what I’m doing.”

“Yes he does. He was laughing when I was doing it.”

This is answering a fool according to his folly! When my son says things like this, he is basically saying that I am mistaken in saying that he needs to do (or stop doing) something. God has not given him the authority to analyze my parenting. A better answer on my part would be, “Son, you may not argue with me. Your responsibility before God is to obey, and I have asked you to stop hitting with the light saber.” We have taught him that if he’d like to appeal something that we have said, that he may do so respectfully. There may be times that I am truly mistaken. When he is asked to do something, he should respond with “Yes, Mom” first. Then he may respectfully ask me to consider other information that he might have. However, he should not be appealing for us to reconsider every request that is made of him.

If you have a child who struggles with anger, disrepect, or manipulation, I recommend getting a copy of The Heart of Anger because there is a lot of good stuff there, much more than I can cover here.

So to sum up, this week I want to continue working on speaking kind words, especially under stress. I also will work on staying calm with my manipulator and not answering him the way he speaks to me.

Now it’s your turn – I’d love to hear how your week went!