One thing that I never anticipated when I started this blog was how much controversy the name would create. At the time, I had three boys. (Now I have four.) I never planned on being the mom of all boys, and it was kind of an adjustment to embrace the “boy-mom” role. (Now, God has blessed us with a little girl as well, so we have four boys ranging in age from 11 to 3 and a 9 month old girl.) Anyway, when my oldest son was 2 or 3, I remember doing art projects with him. Rather than creating a picture, he made sound effects with the paintbrush as he splattered paint here and there. It kind of took me by surprise, and I had to adjust my expectations. So when I started this site, my goal was to encourage moms of boys and to provide them with ideas for things that boys might want to do. Crafts that girls like are everywhere, and moms know more naturally what girls like to do. Plus, girls generally enjoy things for girls as well as things for boys. Boys can be harder to please. Crafts with paper hearts? Beaded bracelets? Nah. A catapult or explosion? SURE! 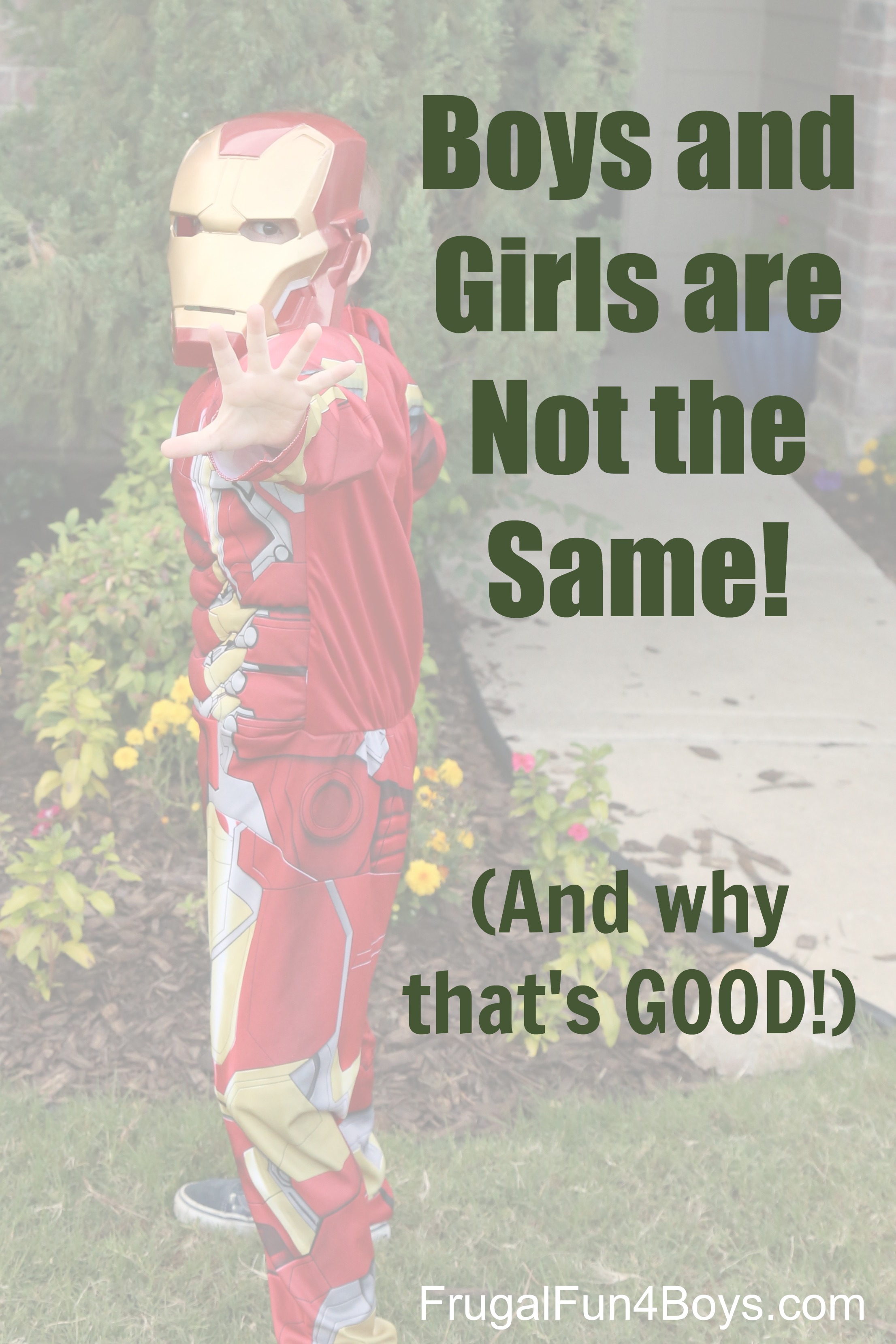 I regularly receive complaints that the name of my site is sexist and offensive because it excludes girls. For the record, I have no problem at all with girls doing the activities on this site. Of course girls will like many of these things! I have had to grow a thick skin, and most of the time these comments don’t bother me, but today I received this one on Facebook:

“It (my post about Legos) came to my newsfeed and it’s offensive. Boys and girls aren’t born blue and pink they are raised this way. This site just propagates the notion that they are different and that’s wrong and yes, sexist. Why you be so sexist? WHY?? WHY?? The only difference boys and girls are born with are their genitalia … “

Really? A site named “Frugal Fun for Boys” is that offensive? I am only sharing the first half of the comment because of the crude language, but this commenter states that she has four daughters. I was not surprised. I can’t imagine a mom of boys, especially 2 or more boys, claiming that their boys would be just like little girls if the adults in their lives would only let them.

Shortly after receiving this comment, I asked my 8 year old son to entertain Janie while I made lunch. He sweetly took her from my arms and said, “Janie! Let’s go play with some of your toys!” He didn’t want a sister, and cried when we found out she was a girl. And now he loves her. She balances out all their boy-ness.

Before she was born, the boys said things like, “Pink? YUCK. Do we have to get her pink stuff?”

I told them, “You don’t have to like girly things. But I am buying her pink crib sheets.”

As soon as she arrived, they melted.

“Here, Janie, do you want to hold your baby doll?”

They don’t want to *be* girly, but they love the fact that their sister is.

When we deny the fact that girls and boys are designed differently by God, we miss the opportunity to appreciate the beautiful differences. We complement each other. Boys and girls are different, not unequal. One is not inferior to the other.

Janie is only a baby. I don’t know what she’ll be like as she grows. But I can tell you right now that she is spirited. She loves loud things and shrieks with laughter when someone screams. She has a strong will and is a very self-determined little thing. And yet, her outgoing nature does not mean she’s not feminine.

When we hold her, she pats our shoulders and says, “Awww.” It’s the sweetest thing ever. The other day, I was hugging Jordan, and Janie looked at us and said, “Awww.” I can tell you with certainty that none of the four boys ever did that!

Jonathan, on the other hand, has an inborn instinct to protect his sister. One day when she was still very young, our dog started chewing on her toes to take her socks off. (He likes to chew up socks – dumb dog!) Jonathan saw the dog biting Janie’s toes and was paralyzed for a second. When he could finally get some words out, he said, “Tucker! You bad dog! You not bite Janie EVER AGAIN!”

Jonathan has always loved babies and owns a couple of baby dolls of his own. But what did he want for his 3rd birthday? A chainsaw so he can “cut down trees and be a worker man.” He wants to be a man. He loves his Grandpa more than anyone else. He can’t wait to be grown up so that he can do real men’s work. I can tell you that this is his nature! We did not push a chainsaw on him. We have not raised him to be a “worker man.”

I am concerned that our culture wants to ensure that girls can do everything that boys can do, and that things should not even be labeled “for boys” for fear of excluding girls. And yet, we take things away from boys that are part of their nature. Turning a stick into a gun? Expel him from preschool! For goodness sakes, teach them gun safety and the right way to deal with conflict, but don’t shame them for gravitating toward manly things. It makes me wonder if there is a connection between the push for boys to act just like girls (and telling them “no” all the time) and the fact that more and more young men have trouble taking on responsibility as adults… But that’s another post entirely.

So yes. This site is “for boys.” It’s not for only boys. It’s not a statement about how girls should not participate in science or math (another accusation that I hear frequently). It’s just a resource for moms (and dads, but not as many dads read mom blogs) to find projects that they can do with their boys, and of course girls are going to be happy to participate too! It’s a place where moms can read about another family where the boys turn wrapping paper rolls into light sabers and play endless jumping off the couch games and think, “Okay, our house is pretty normal after all!” I think it’s okay to have something “for boys.” There are plenty of things for girls out there. I’m not saying that girls should only play with dolls and pink princess stuff (I actually won’t be encouraging Janie to embrace the princess lifestyle!), and I’m not saying that boys can’t play with dolls.

A few weeks ago, my four boys and a neighbor boy were out playing football. I went out to call them in, but when I saw what they were doing, I stopped. Aidan was coaching Jonathan on how to run a football play. He instructed the neighbor boy, “Now don’t go rough on him!” The neighbor did a hilarious fake tackle in which he missed Jonathan and slid across the grass. Then they all cheered while Jonathan ran the ball down for a touchdown!

I was so proud of all of them, grass stains and all. They are boys turning into men.

What I am saying is that it’s silly to pretend there are no differences. Because when we do, we miss the beauty that God created.

I would love to hear your thoughts on this issue! Due to the controversial nature of this issue, polite disagreement is welcome, but mean and rude comments will be deleted.