Here’s a fabulous STEM activity for kids!  Build a working Trebuchet out of craft sticks.  You can construct and play with the trebuchet, or take it a step further by printing the recording sheets included in the post.  There are two experiments to perform with the trebuchet, and students can record their results.

We used a rock as our counterweight.  Simply pull down the arm… 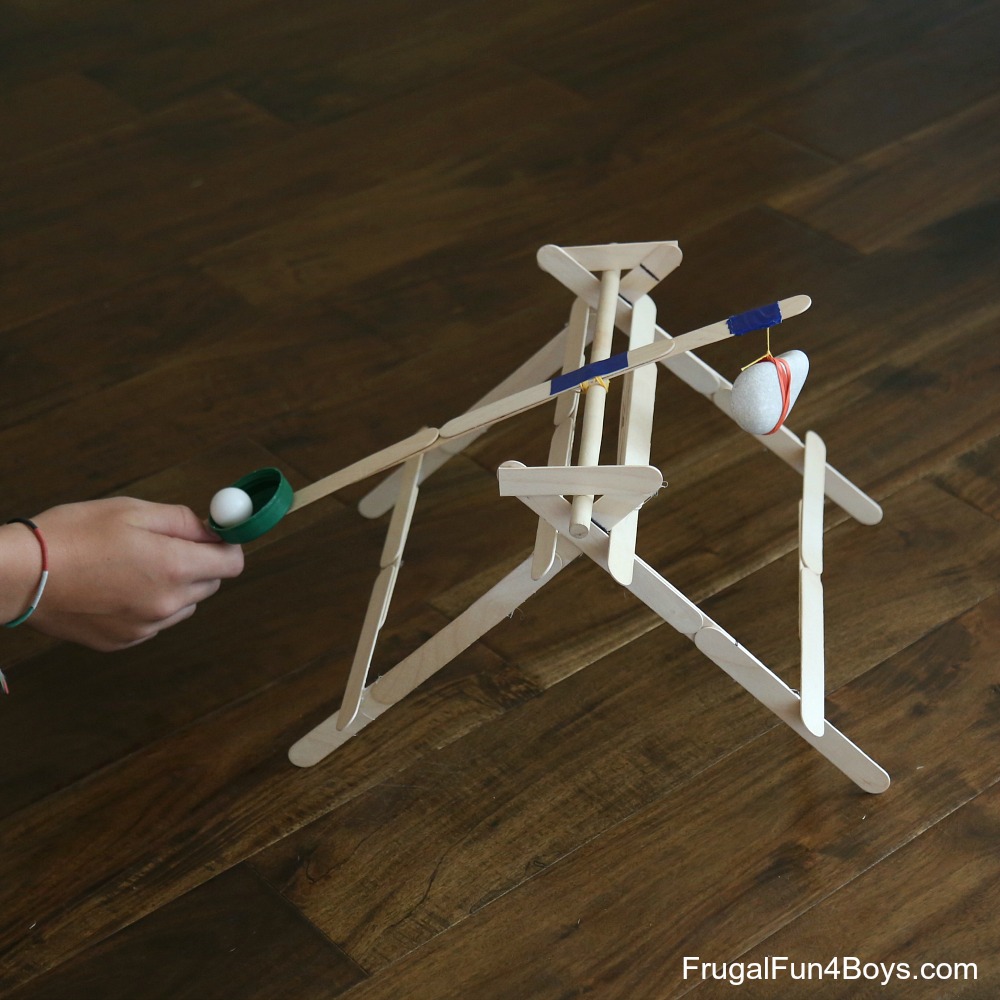 Then let go!  The weight of the rock causes the arm to drop down, and it launches the projectile! 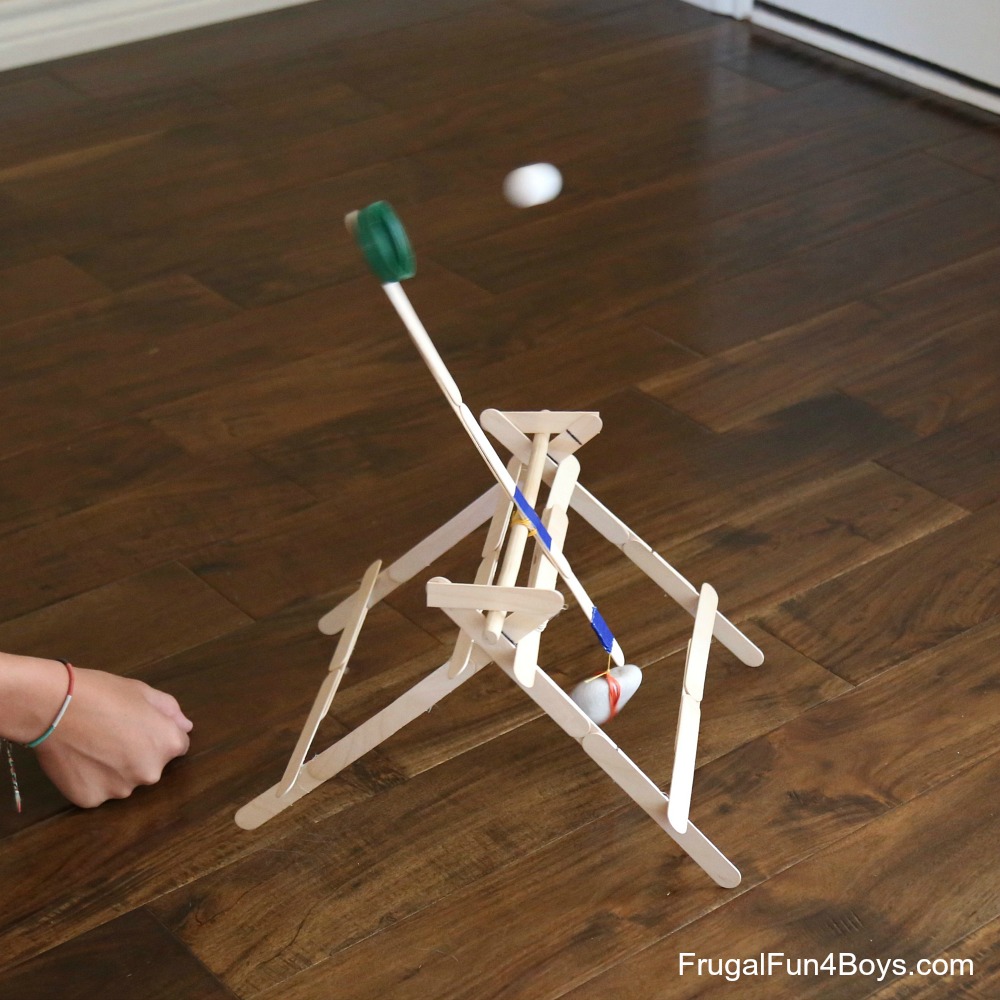 Ready to build a trebuchet?

We chose craft sticks as our primary material because we have a ton of them, ha.  They are inexpensive and easy to find, making this a project that most teachers could do with a realistic budget.  If you have a different idea for building materials, I’m sure there are better options out there!

This project was primarily designed by my 13 year old, but younger kids could definitely build one, especially if they are using these pictures as a guide. 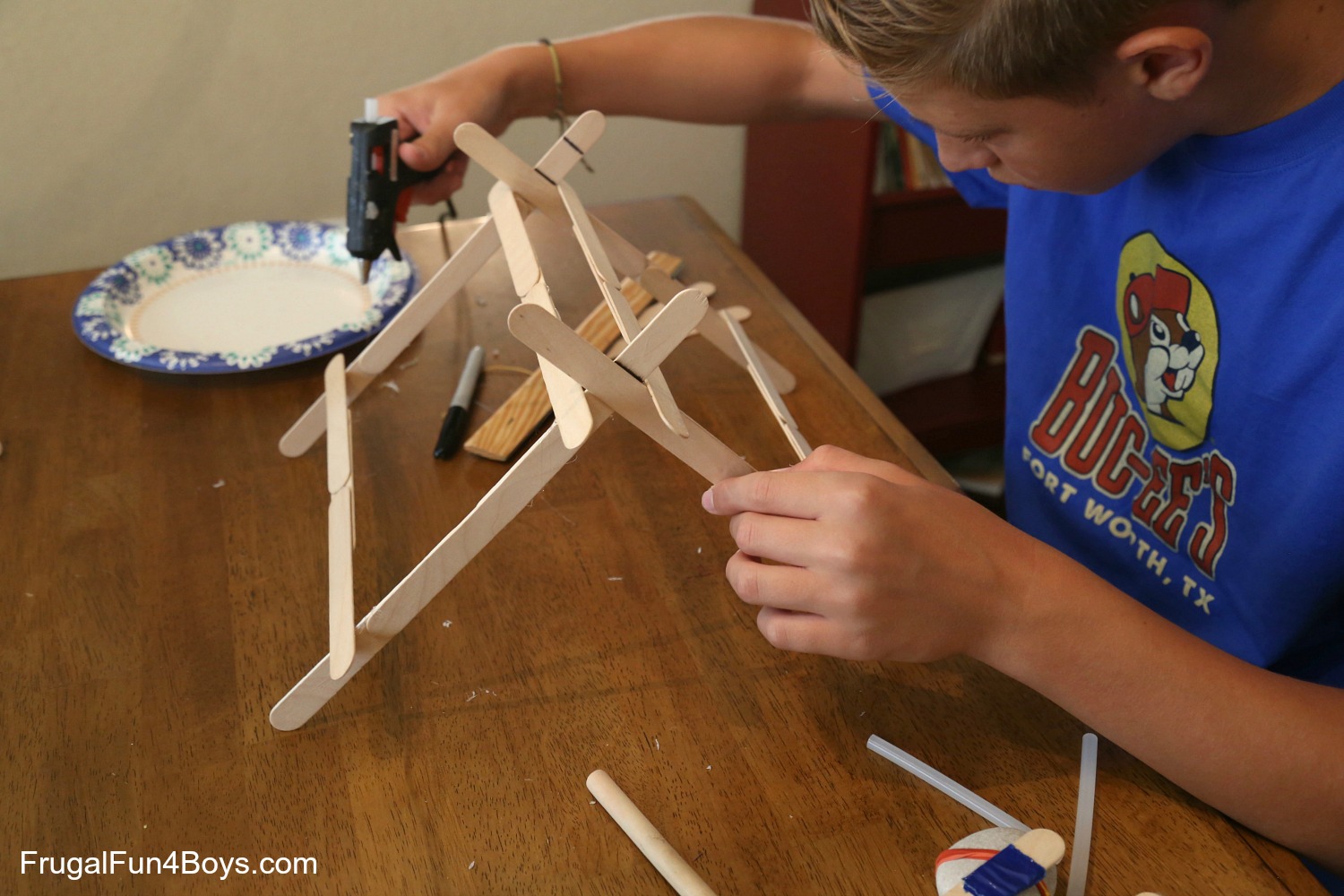 The main legs of the trebuchet are made out of 3 craft sticks, which are overlapping and glued together.

The launching arm is made of more overlapping craft sticks.  We used string to tie the arm to a dowel rod.  Then we glued a juice bottle lid to the arm to hold the projectile. 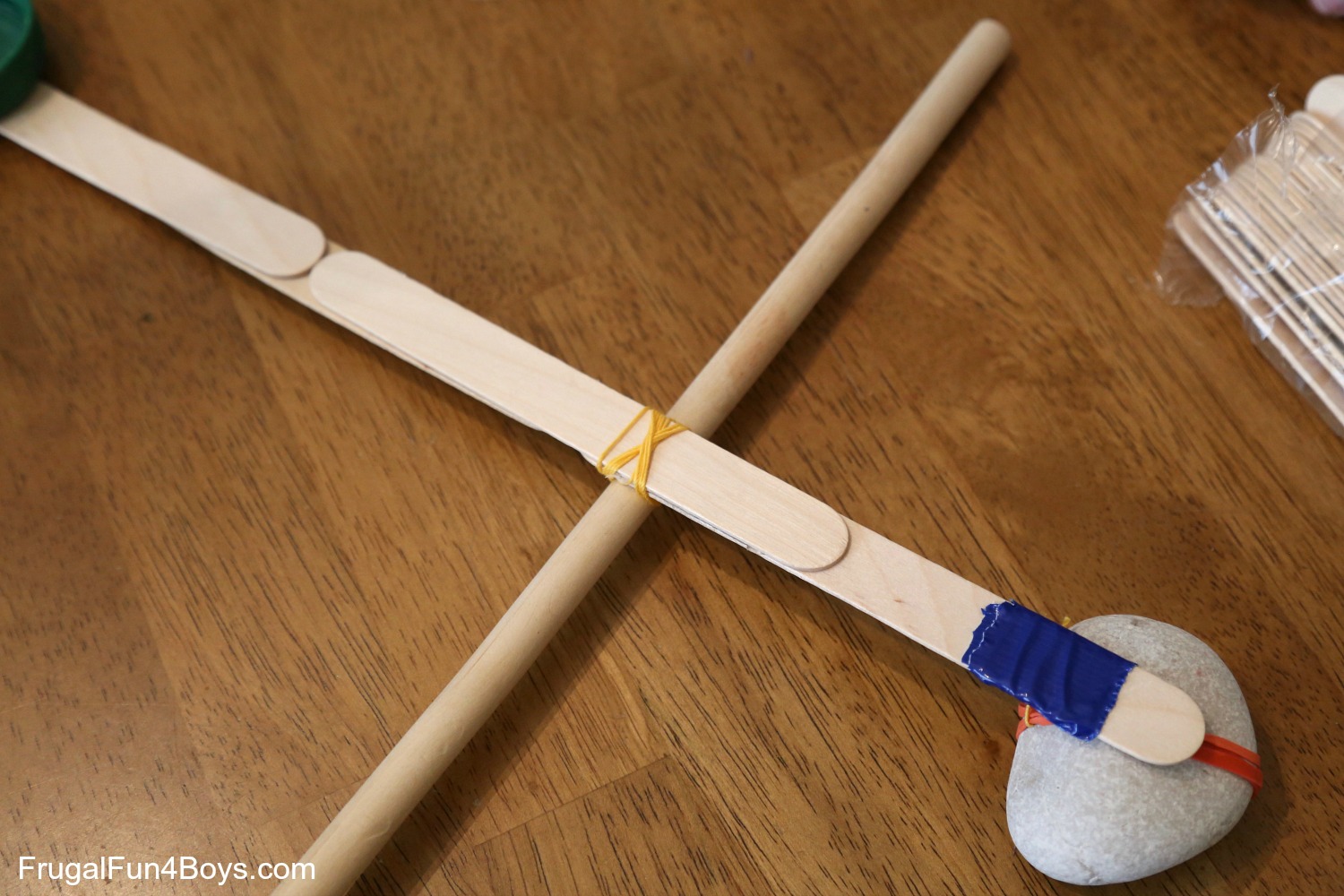 Aidan and I tested out the trebuchet, and could tell that it worked, so then we worked on making the launching arm more stable. 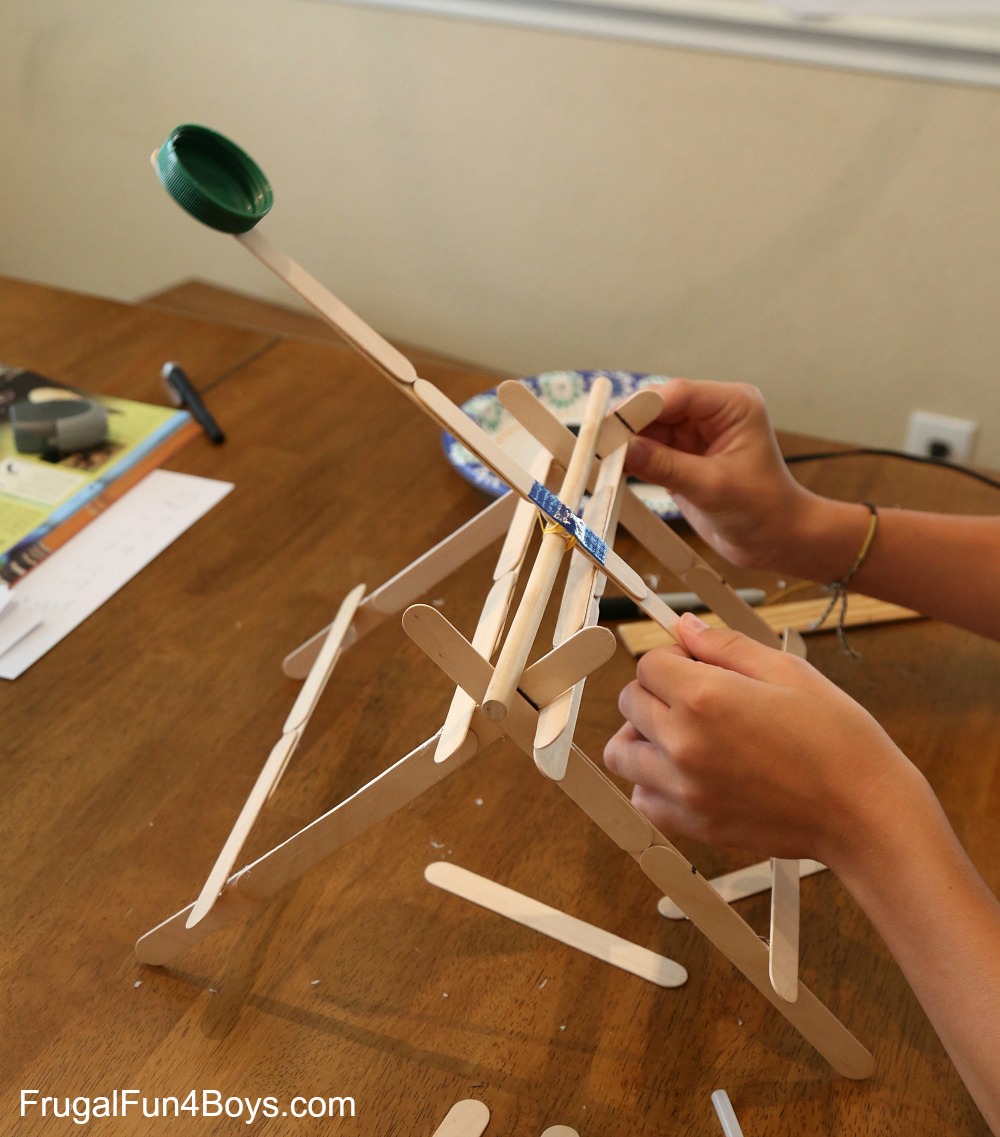 In order to get enough torque to launch the projectile, we needed to use a lot of weight.  Aidan added pieces of craft sticks on both sides to hold the dowel rod in place.  Otherwise it would sometimes jump out of its track during the launch. 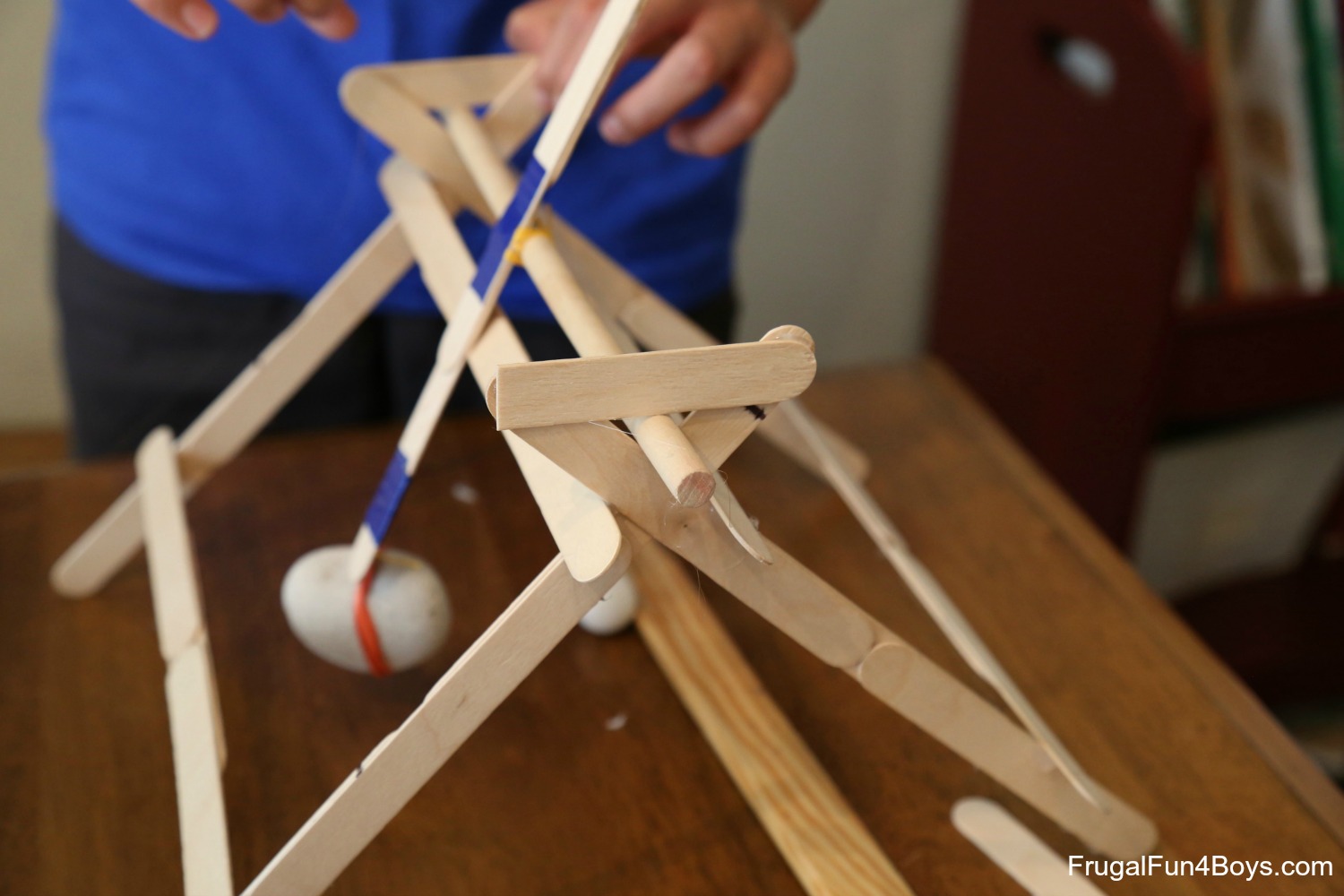 Make it an Experiment!

Will the trebuchet shoot farther with a long projectile arm or a short one?  To test this, we adapted our trebuchet by adding more craft sticks to make the arm longer.  Then we added juice caps in two places as shown below.

(The projectile traveled farther when launched from the end of the arm, but let your kids figure this out themselves!) 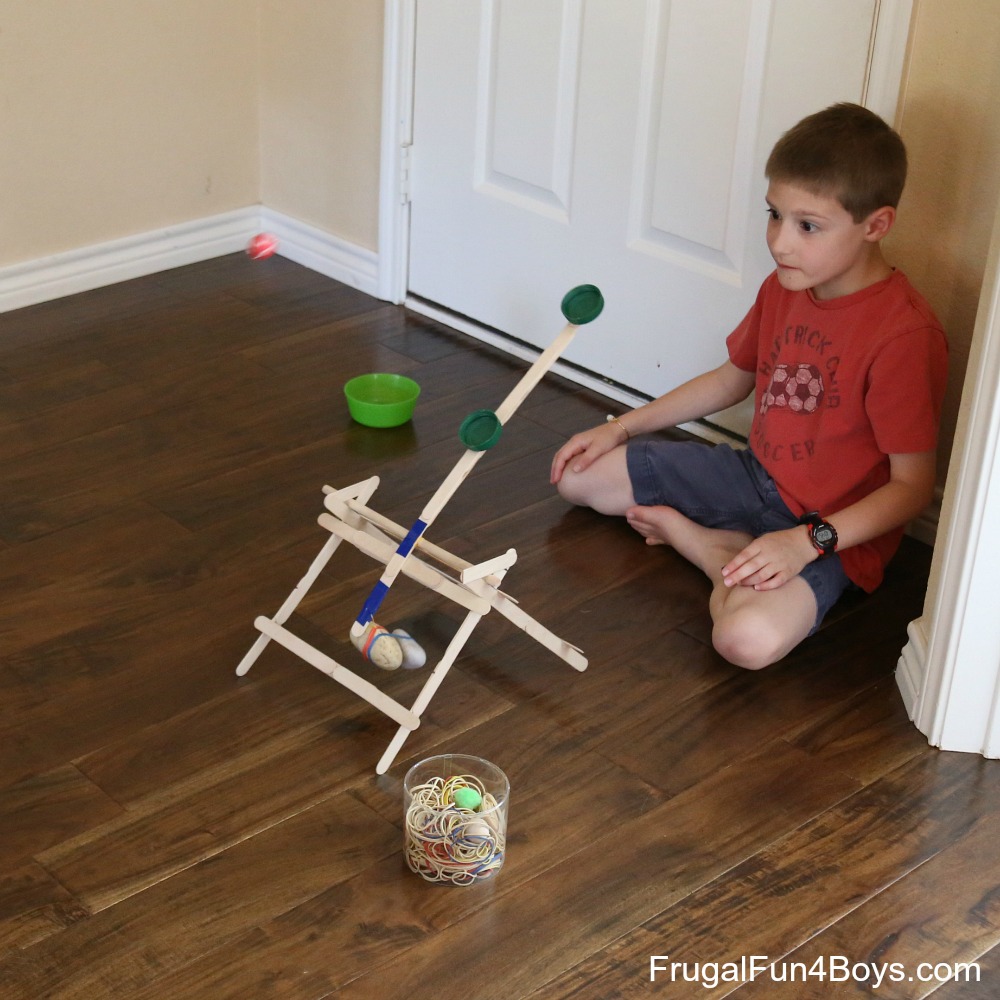 We also tested our trebuchet to see what types of objects would travel the farthest.  We tried a ping pong ball, a little wooden ball (from the craft store), a bouncy ball, a larger bouncy ball, a pom pom ball, and a little stone.

It works best to have one person to launch the trebuchet, while another person marks the place where the object lands.  It’s hard to see exactly where it lands from the perspective of the launcher.  Measure each trial and record your results! 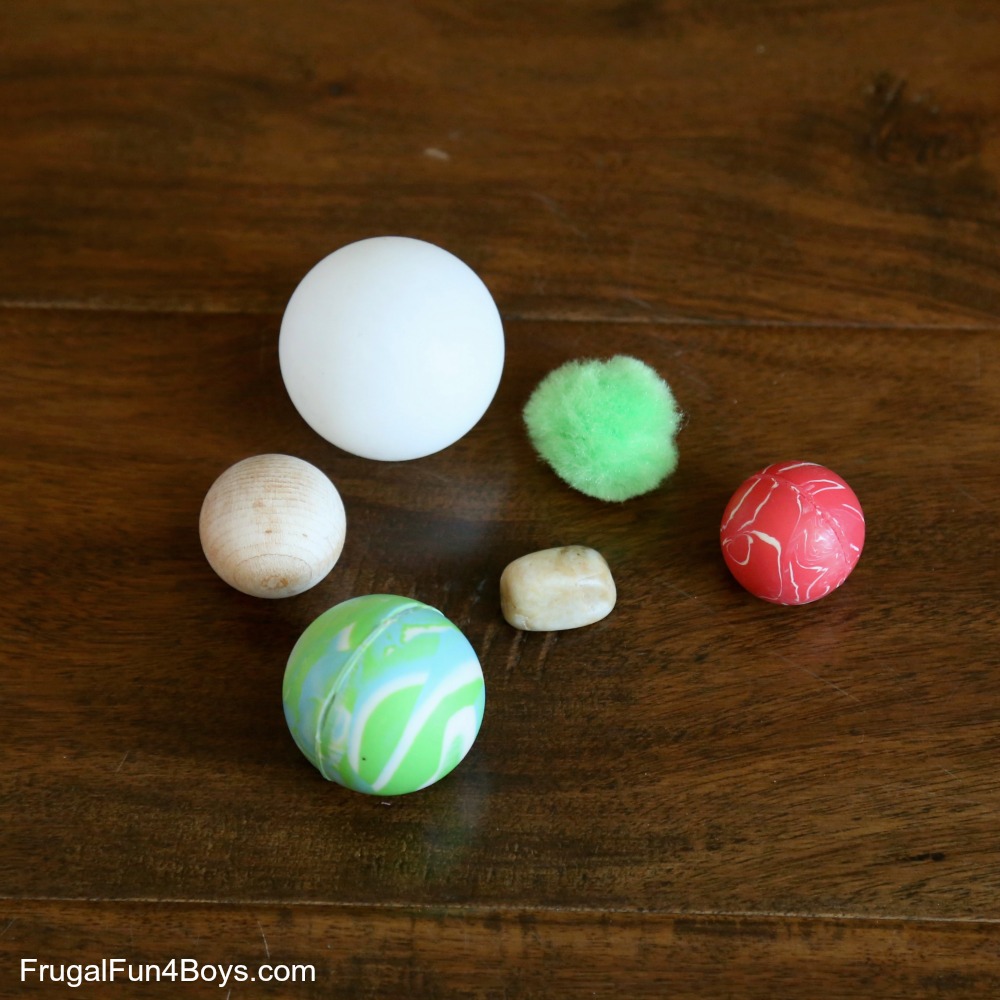 Kids can easily record their results on the recording sheet – download it below. 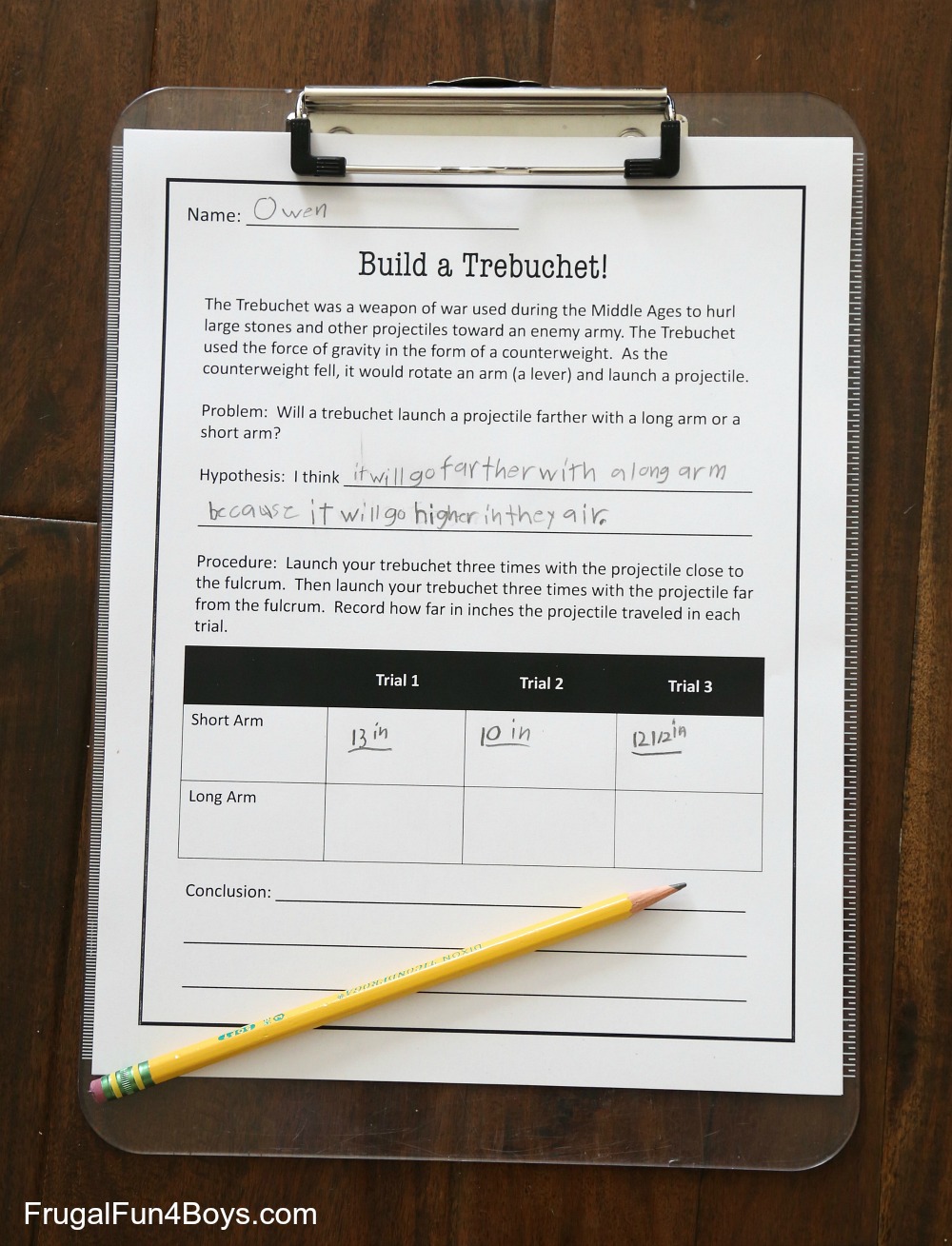 The recording sheet has two pages – one for each experiment. 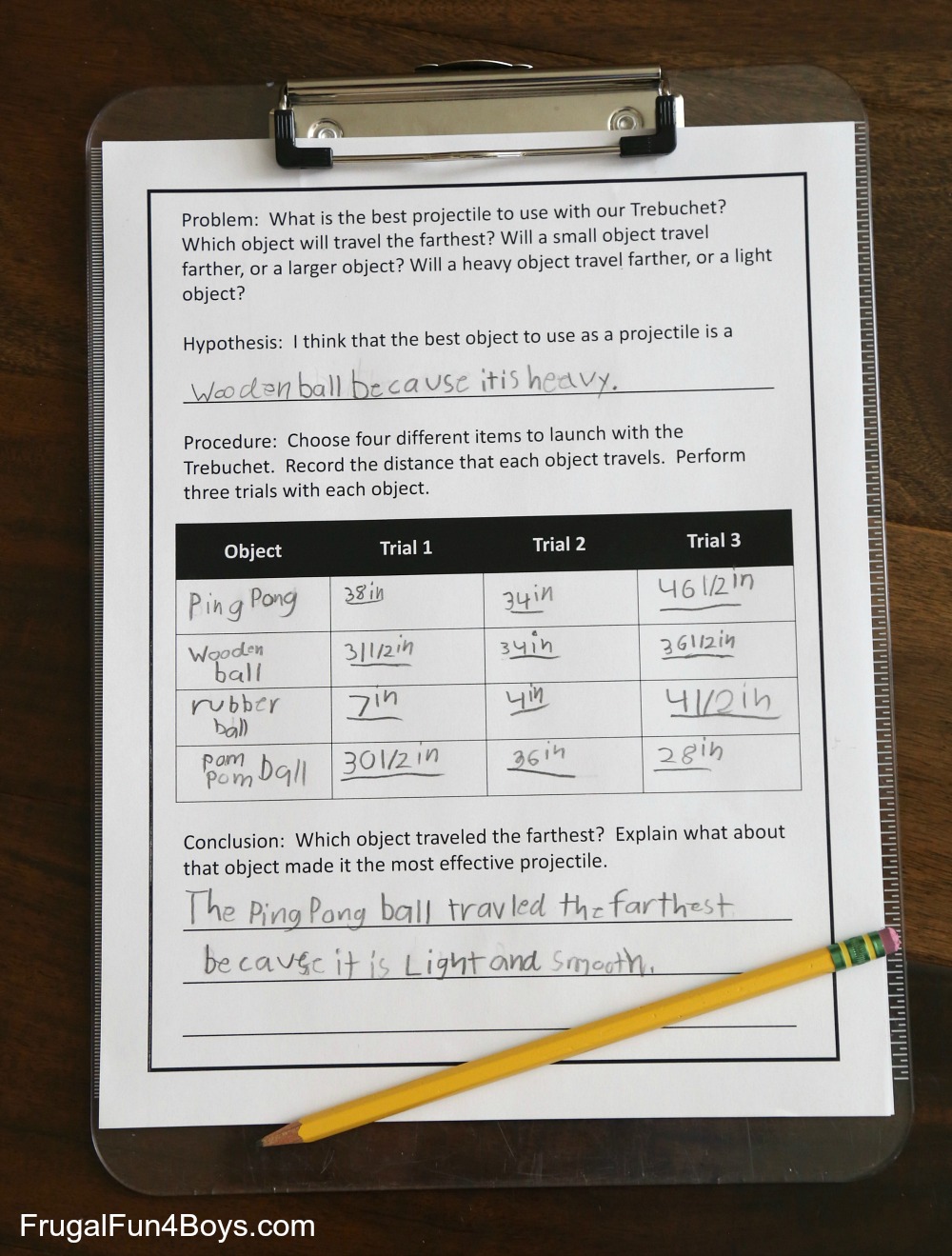 I created two versions – one for 3rd grade and under and one for 4th grade and up.  The older kids version includes a column for recording the average distance that each projectile traveled.  It also includes a space for students to record possible sources of error in the experiment.  They’re both free, so feel free to download both and see which would work better with your kids or students!

Trebuchet Recording Sheet – Grades 4 and up 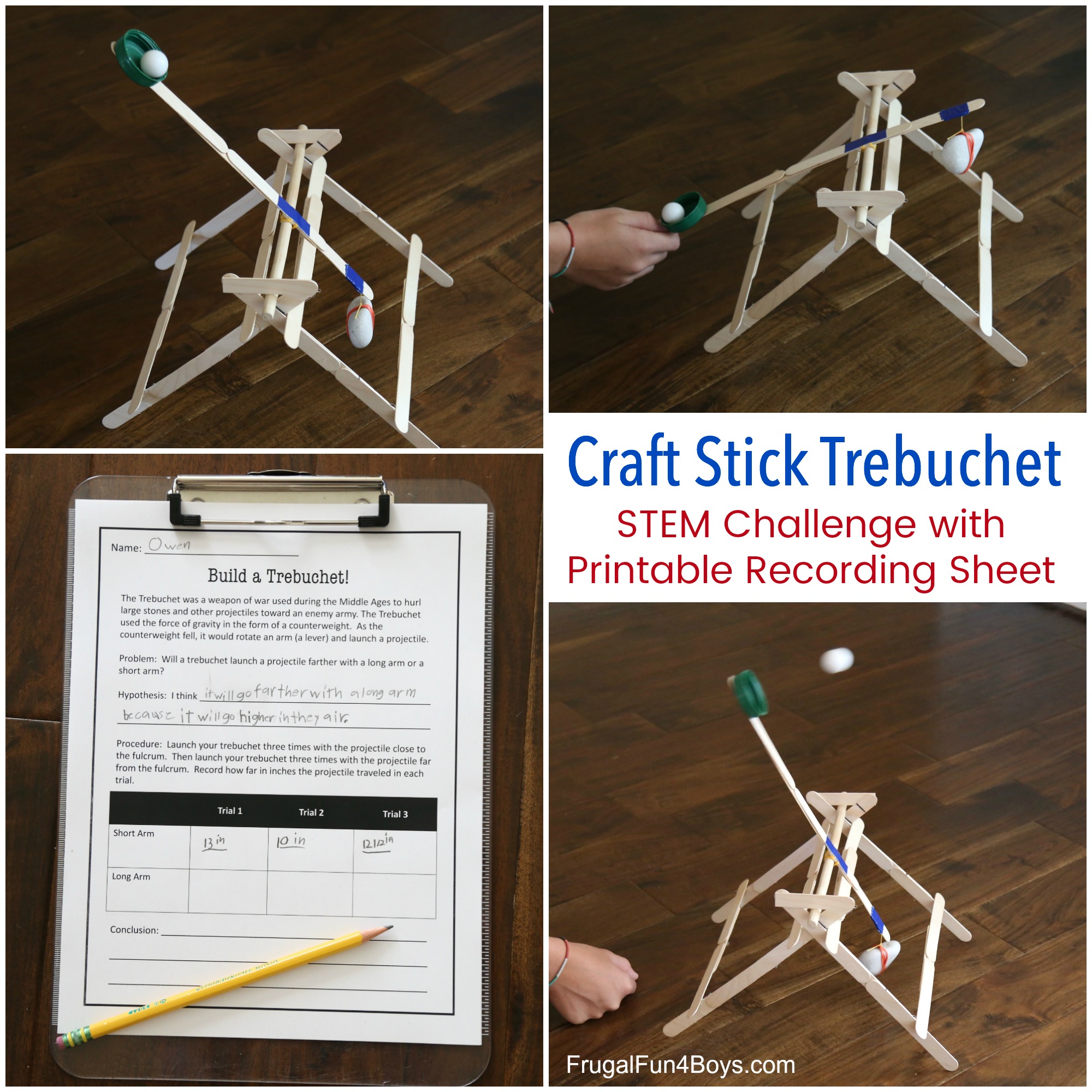