Here’s a fun spin on a basic ramp for toy cars – build a cardboard box ramps race for Hot Wheels or Matchbox cars! 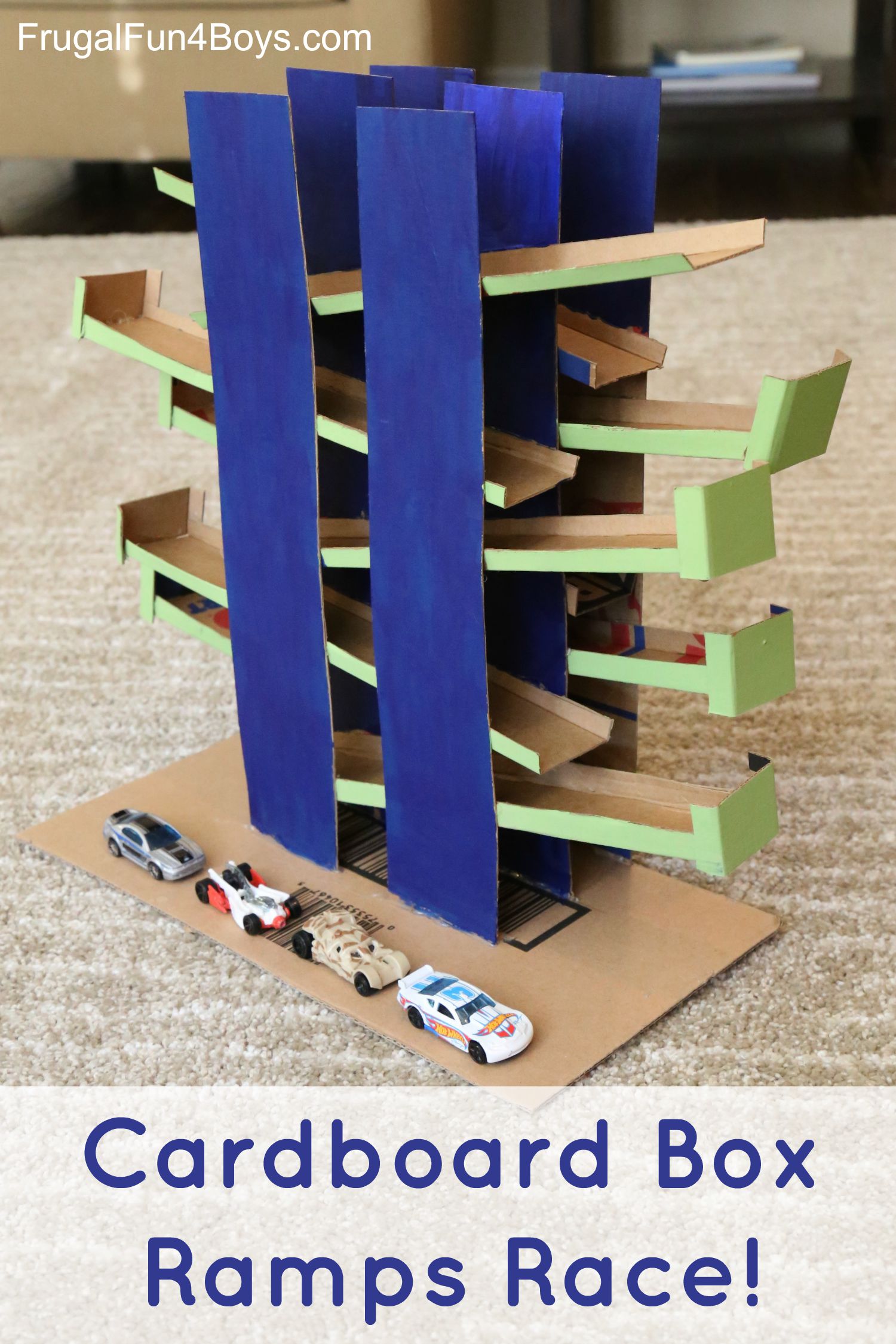 There are two race laces. Start two cars at the top and see which one wins. This toy has been a huge hit! 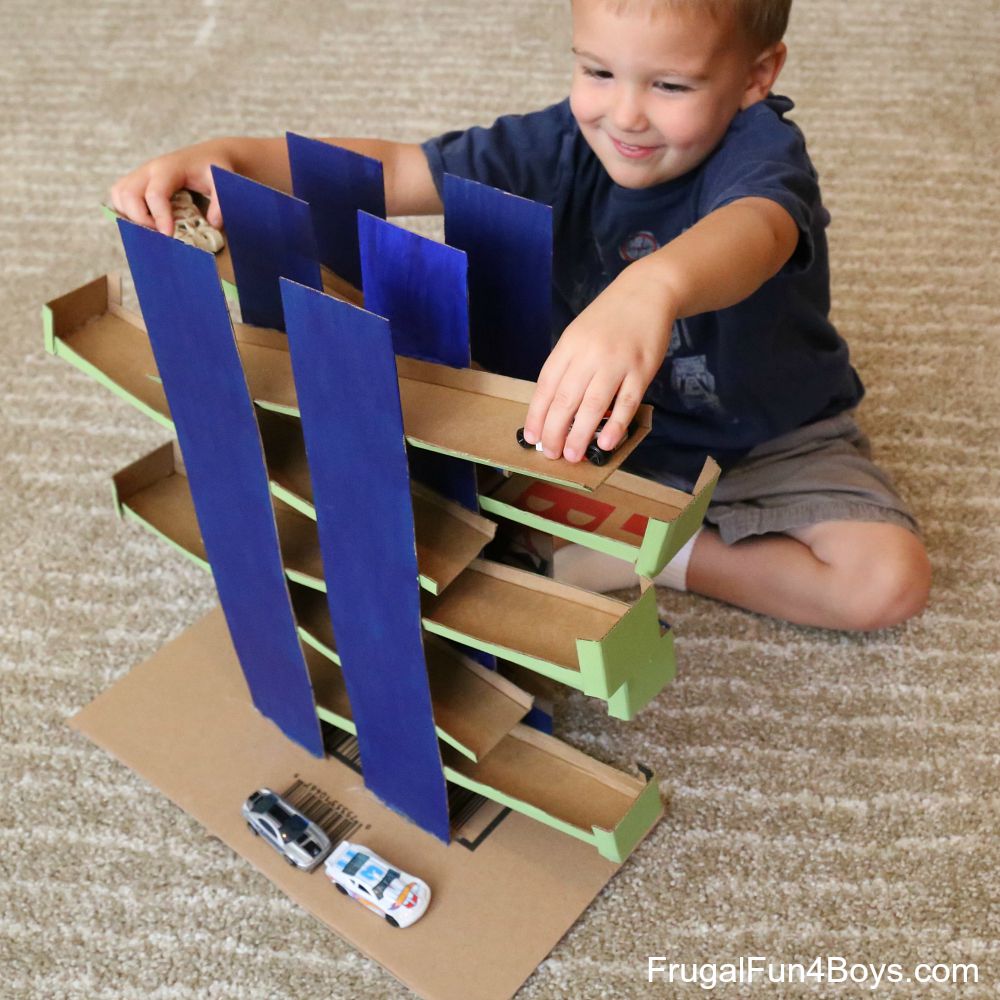 I saw this idea on Pinterest, but it was only a photo that led to a private, invitation only blog. We adapted the idea to make two lanes!

Here’s how it works:

This weekend we discovered pizza at Costco – the kind that they make in the cafe in the front of the store! It was a pretty great discovery. Now I can pick up groceries and come home with pizza all in one trip. Anyway, we cut the tops off the pizza boxes to make this fun project. The cardboard was just the right thickness. It’s sturdy, but you can fold it easily to make the ramps. We used three pizza boxes total (lids only – the bottom was too greasy). We only bought two pizzas, but then we ran out of cardboard. So my husband went back to Costco hoping that they would give him an empty box, and he was even willing to pay. They wouldn’t… so now we have an entire cheese pizza in the freezer! It will come in handy one day, I’m sure.

My husband and I built this ourselves. It’s not really a “kids can help” type of project, but they can help paint it when it’s done. It’s also obviously not going to last forever, but hey – we were only out some pizza boxes!

To build on you will need:

Step 1: Cut a piece of cardboard for the base. We did not use the pizza box for this – we used some heavier corrugated cardboard from a box. Ours is 8 inches by 15.5 inches.

We used 16 total strips. There are 6 strips in the support structure, and then 5 ramps on each side.

Step 3: Cut the strips for the ramps down to about 13 inches long. Fold up just over 1/4 inch on each side. (It doesn’t have to be exact.)

Step 4: Fire up the glue gun and start building! Build from the bottom up. Start by gluing down two support pieces. We used binder clips to give them a little extra support until we had the ramps on. Test each ramp with a car to make sure it works before gluing, and keep in mind that short cars that are low to the ground work best. We glued the first ramp. Then tested the second ramp. Then glued the second ramp, etc. There needs to be enough clearance between the ramps for the car to fit easily, but be careful of making the gap too big! The car will flip over if the drop off is too far. 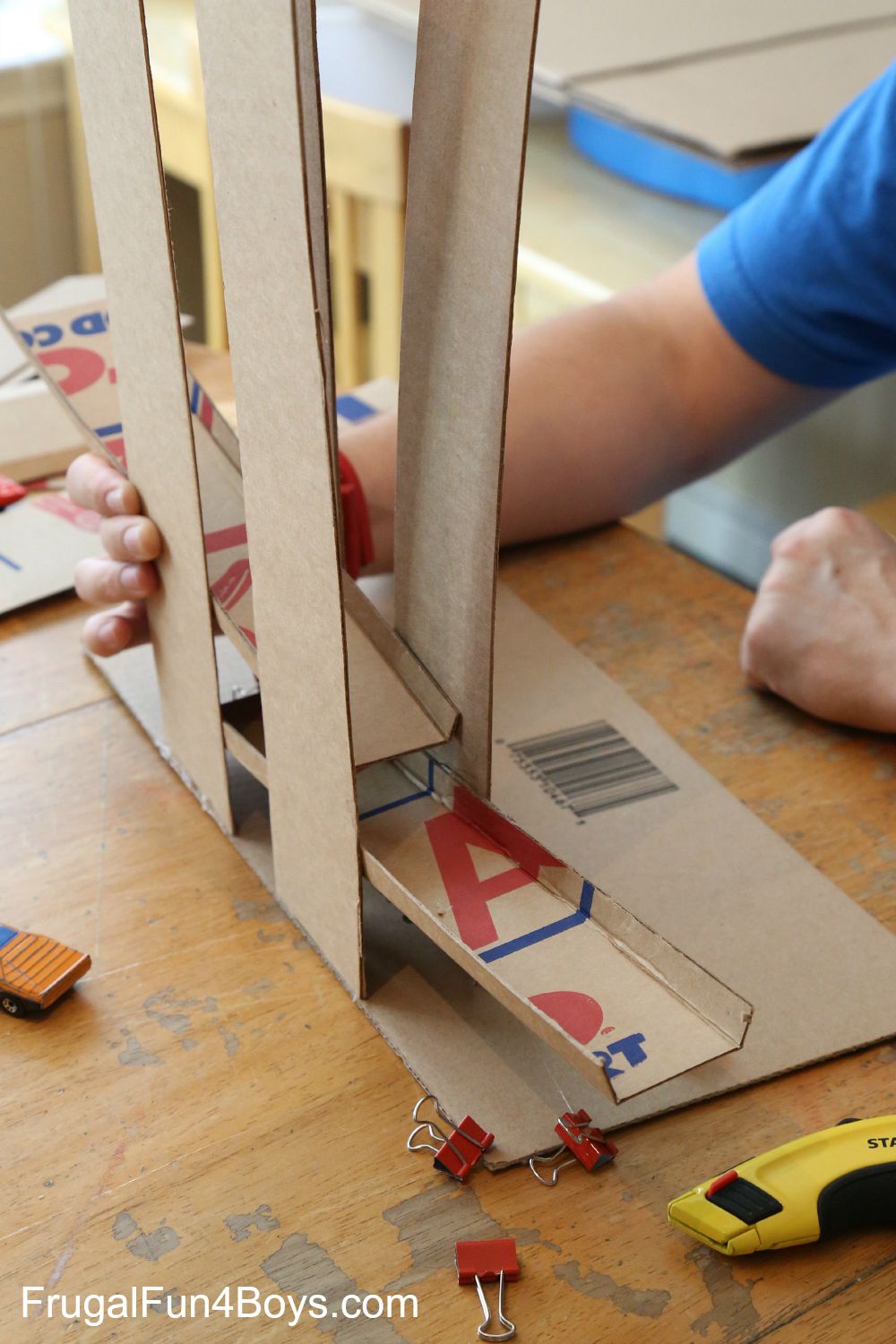 Use some more cardboard to make “bumpers” on the ends of each ramp. It’s possible to make it work without the bumpers, but then the ramps have to be so flat that the cars roll pretty slowly. We liked faster ramps with bumpers better. 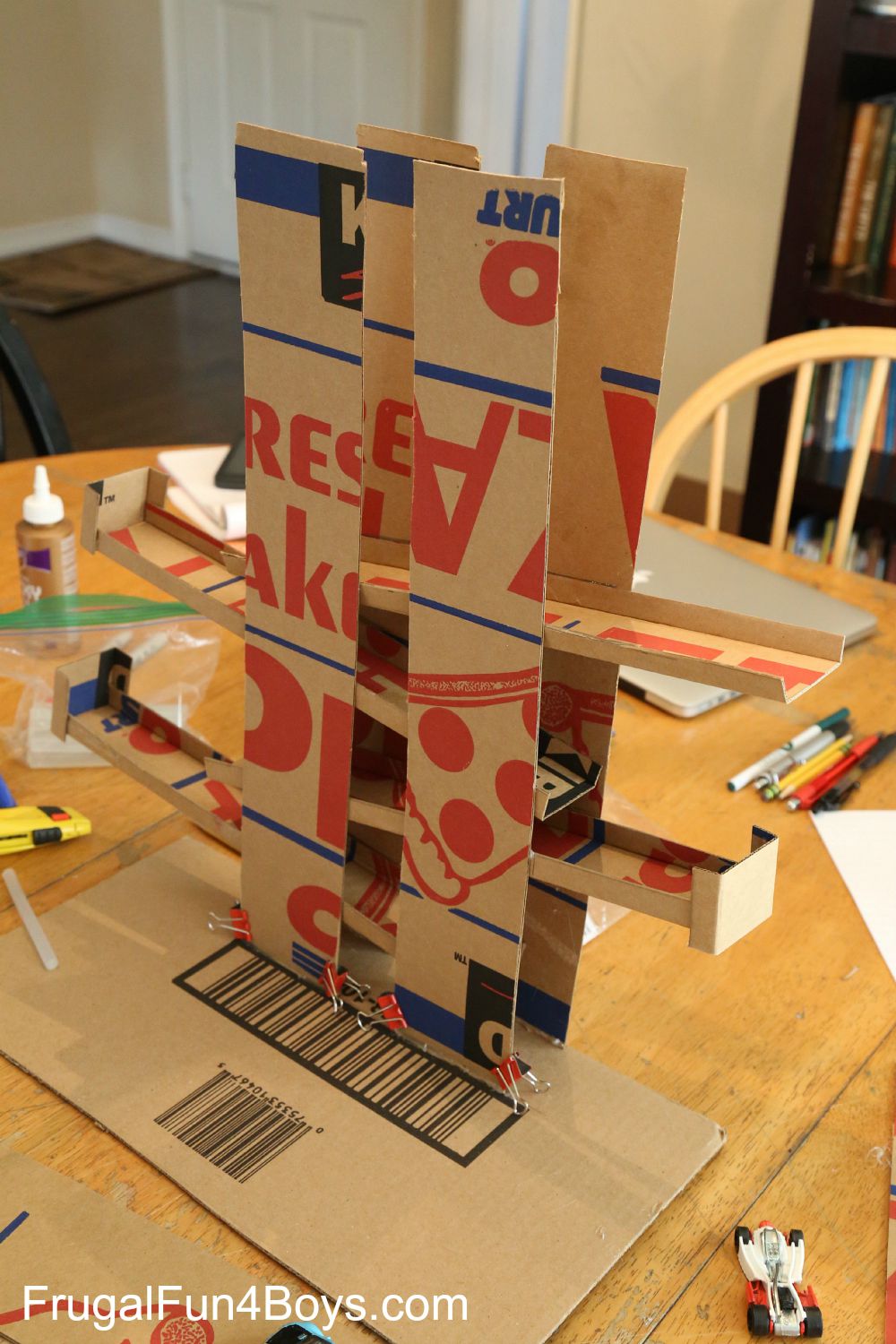 Here is what our finished ramp looked like. We started the second ramp on the opposite side so that the cars go back and forth past each other on the way down. 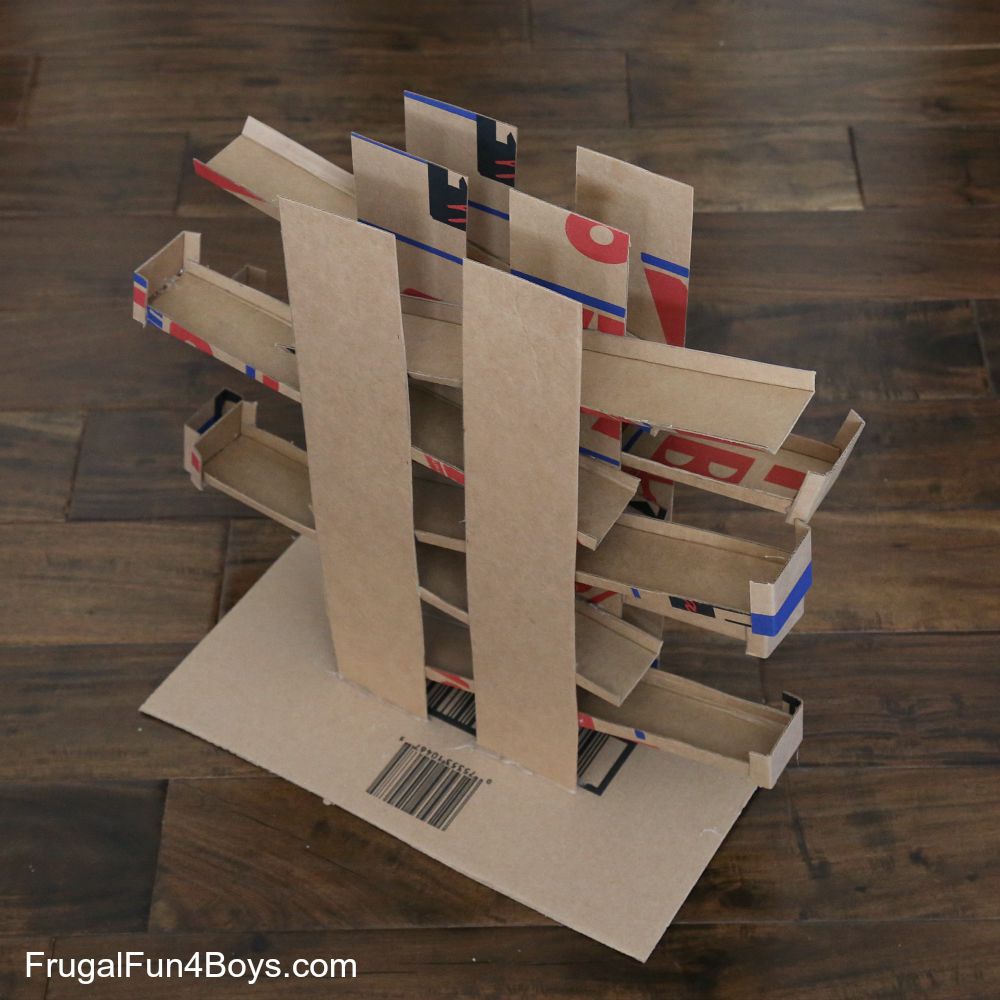 We decided to add some paint to dress it up a little.

Jonathan has had so much fun with this! I left it out with a box of cars, and he played and played with it while we did school this morning. 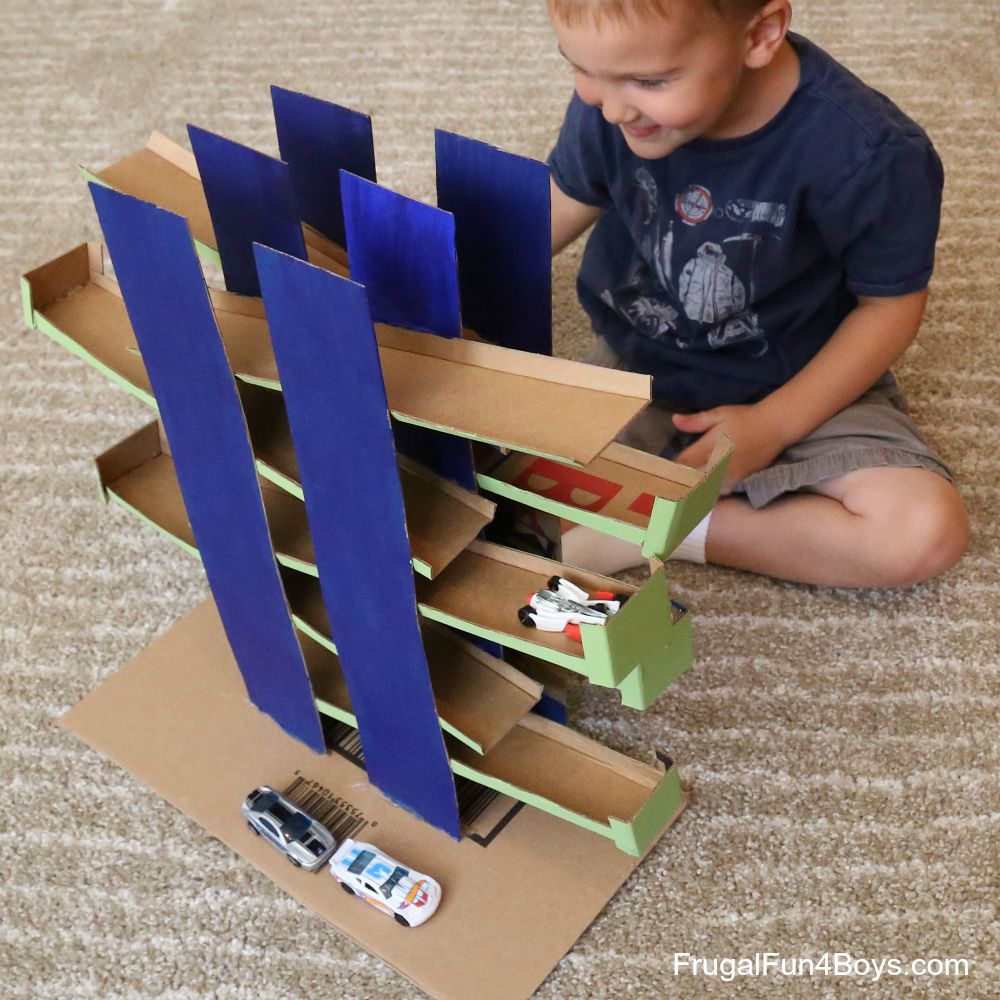