This is a sponsored conversation written by me on behalf of Sphero. The opinions and text are all mine.

Coding. Robots. STEM. As parents and teachers, we know that we need to incorporate technology and computer science into our kids’ education, but it can be a little overwhelming, especially for those of us who grew up playing Oregon Trail on primitive computers! Thankfully coding does not have to be difficult. We were given the opportunity to try out the SPRK+ from Sphero Edu, and I am totally impressed by how easy it is to go from literally no knowledge of coding to writing programs that send this cute little app-enabled robot through a maze and more!

Be sure to stick with me all the way to the end of this post – you’ll have a chance to win your own SPRK+ robot!

We found the SPRK+ very easy to use! Charging it is a breeze. Use the blue power cord to plug the base into a wall outlet. Place the robot on top of the base. The base will flash, and when it stops flashing the robot is fully charged.

To operate your SPRK+ robot, you’ll need the Sphero Edu app. Once the app is paired with your robot, you’re ready to go. The app makes it simple to create programs for your robot, and it also provides inspiration for new STEM challenges that you can use with your kids – more on that in a minute. 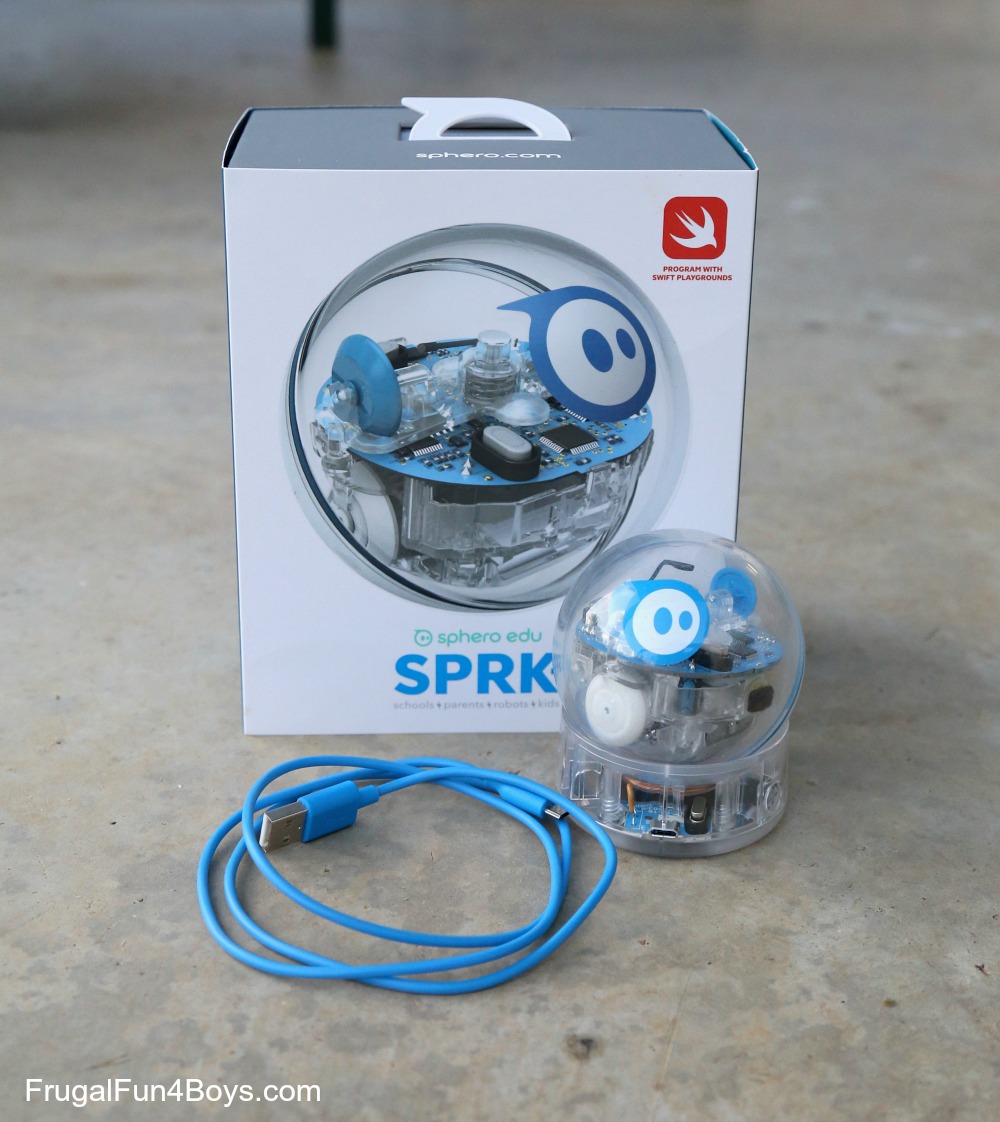 We tried out the SPRK+ robot in drive mode first. This allows kids to operate the robot like a remote controlled car, and I’ve got to admit – it’s really fun! The clear design is so cool because you can observe the mechanisms that cause the robot roll and to change directions.

When you’re ready to progress from there, you can choose one of three ways to create code for the SPRK+. The draw mode allows kids to literally use their finger on the screen to draw a path for the robot. The blocks mode allows kids to create a sequence of operations for the robot to perform. For example, you can choose roll, spin, stop, change color, etc. The third way to create a program is to write one using java script.

I was worried that my boys would not want to move on to coding after playing and driving the robot around, but I gave them a simple challenge – create a code that will make the SPRK+ robot knock down a stack of cups. We used some masking tape to mark a starting point. 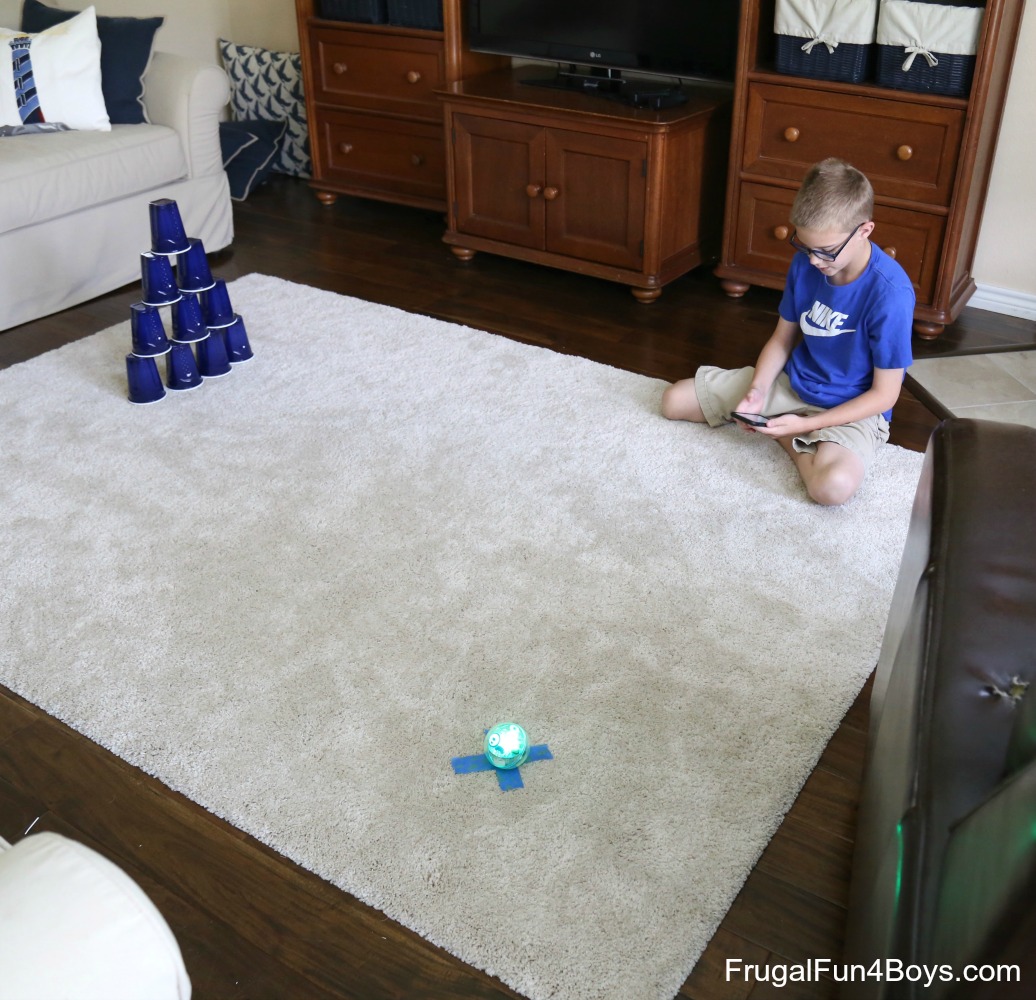 Gresham (10) was happy to give it a try! Using the blocks function in the app, he created a program that would make the robot travel to the right, then turn and travel straight toward the cups.

The photo below is not the program that he wrote for this challenge, but it will show you how the coding works. You can see the variables that kids can set in the app. In the first row, it says “Roll” (the roll block was chosen and dragged into place). Then Gresham had to choose how long the robot will roll (in seconds), how fast it will roll, and the direction in degrees that the robot will travel. Then the second line says “Spin,” and this is how you tell the robot to make a turn. (You can also just set it to roll in a different direction, but my boys like the spin function.) You can also add a “stop” block between steps. 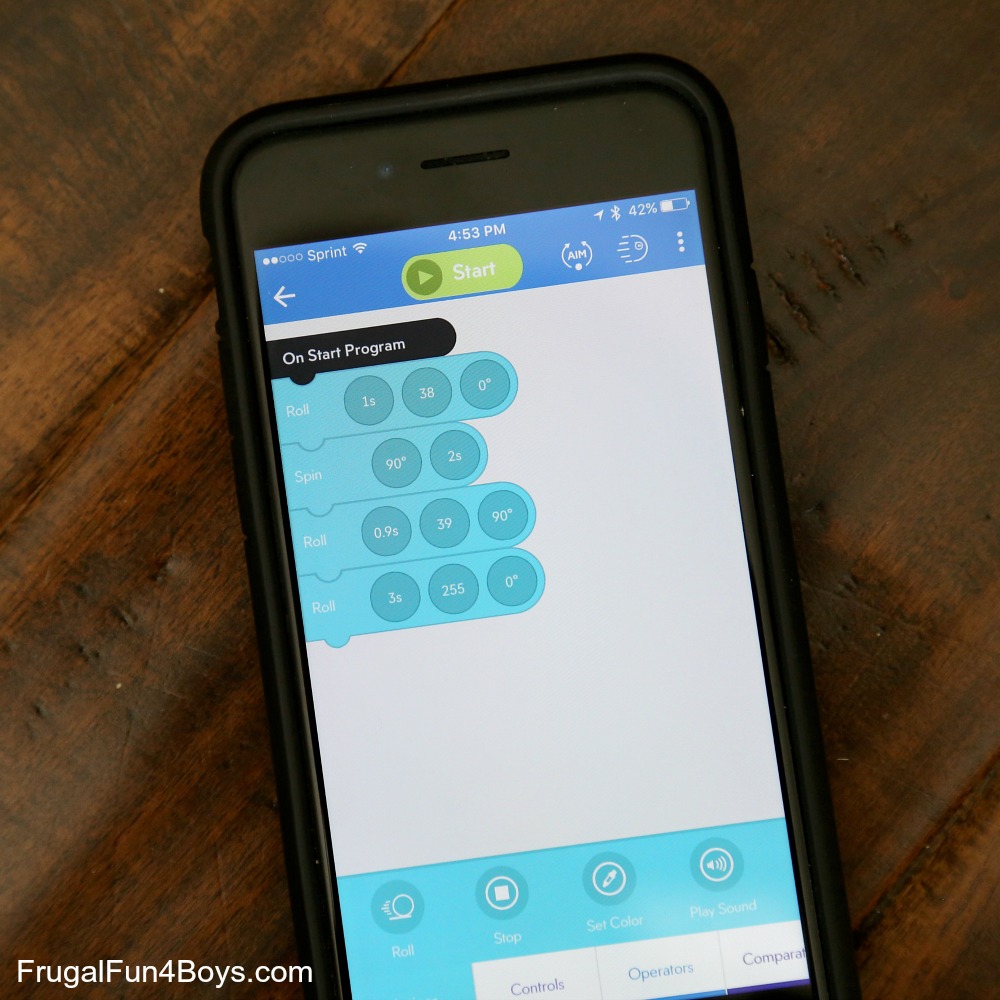 Ooops… the robot went too far to the right before turning… 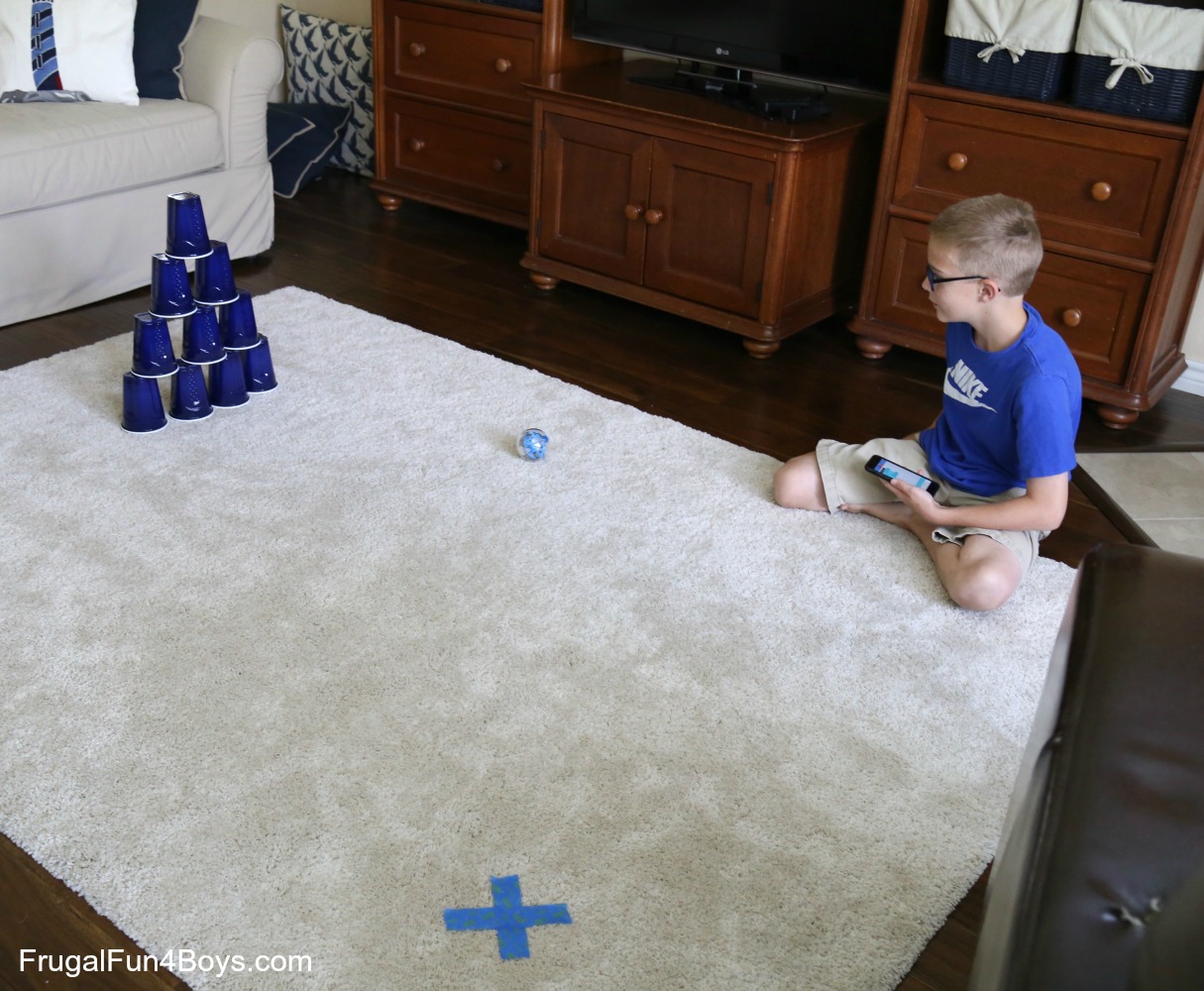 Gresham adjusted the code to have the robot travel fewer seconds before turning. Another option would have been to reduce the speed of the robot. I love how this app helps kids develop thinking skills and teaches the relationship between distance, speed, and time.

Boom! This time was successful. 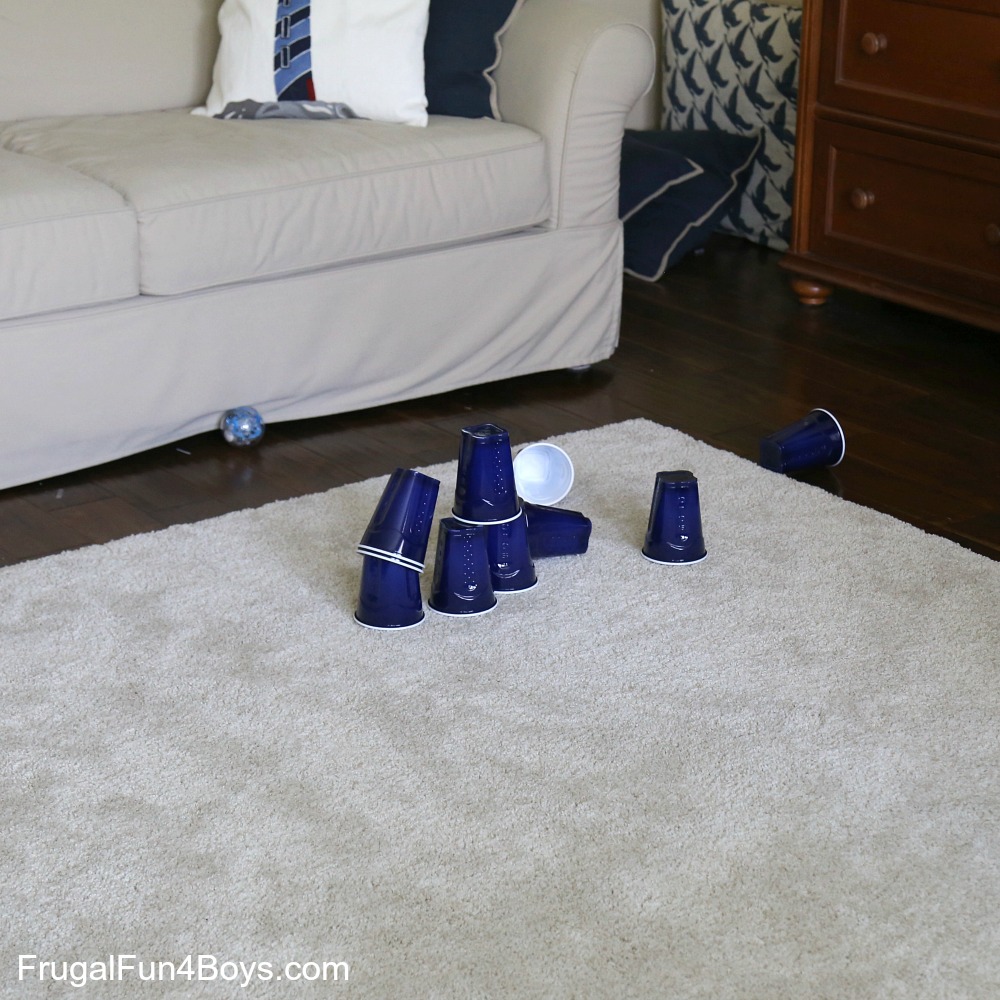 Another day we decided to try a simple maze. Gresham was able to design the program so that the SPRK+ did not even touch the LEGO brick walls! 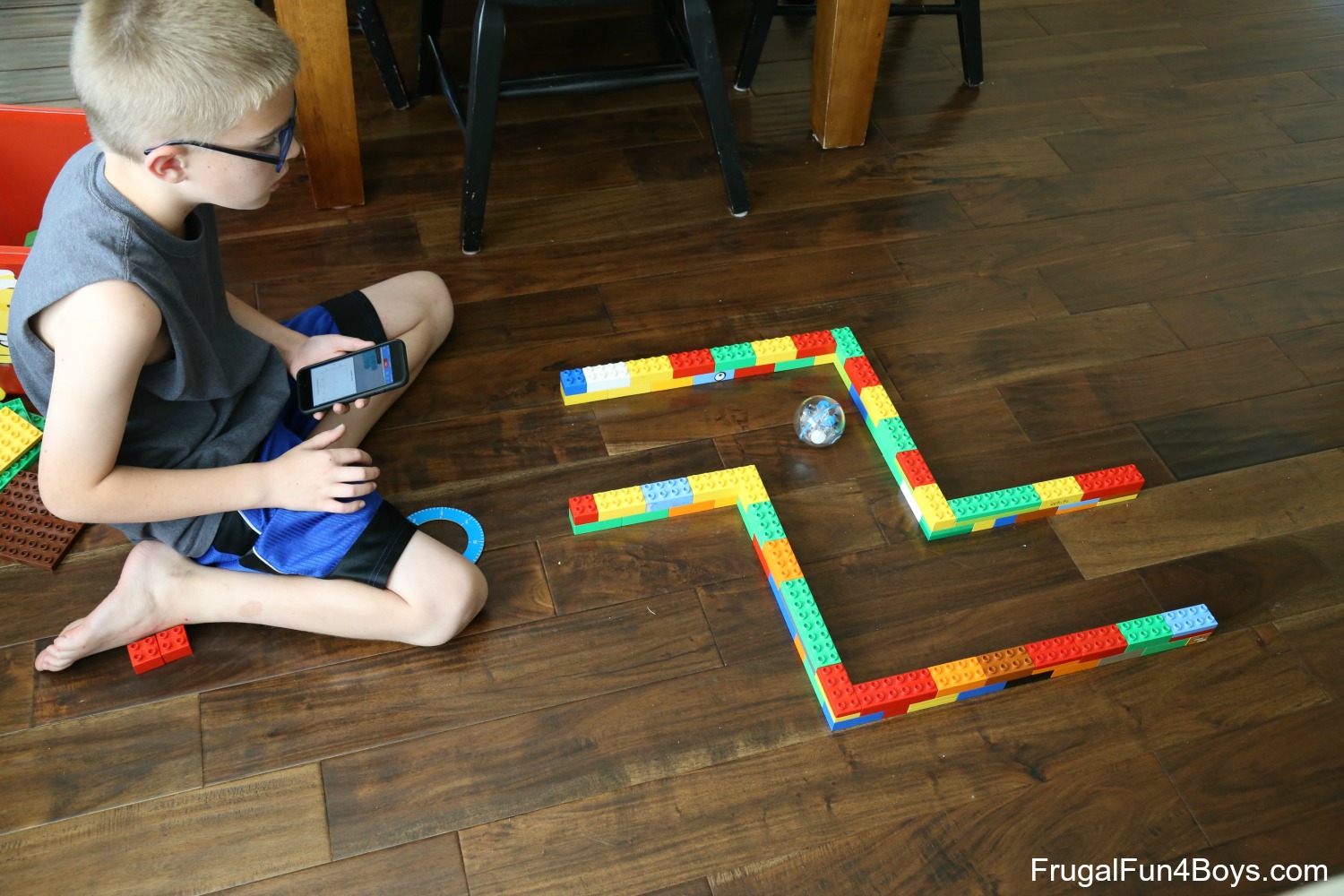 Then he decided to add some cups for the robot to knock down after exiting the maze! So fun. Of all my kids, I thought Gresham would be the least interested in the robot, but he loves it! He’s not a real technical type kid, but this robot is so fun and playful that he is enjoying the coding aspect as well. 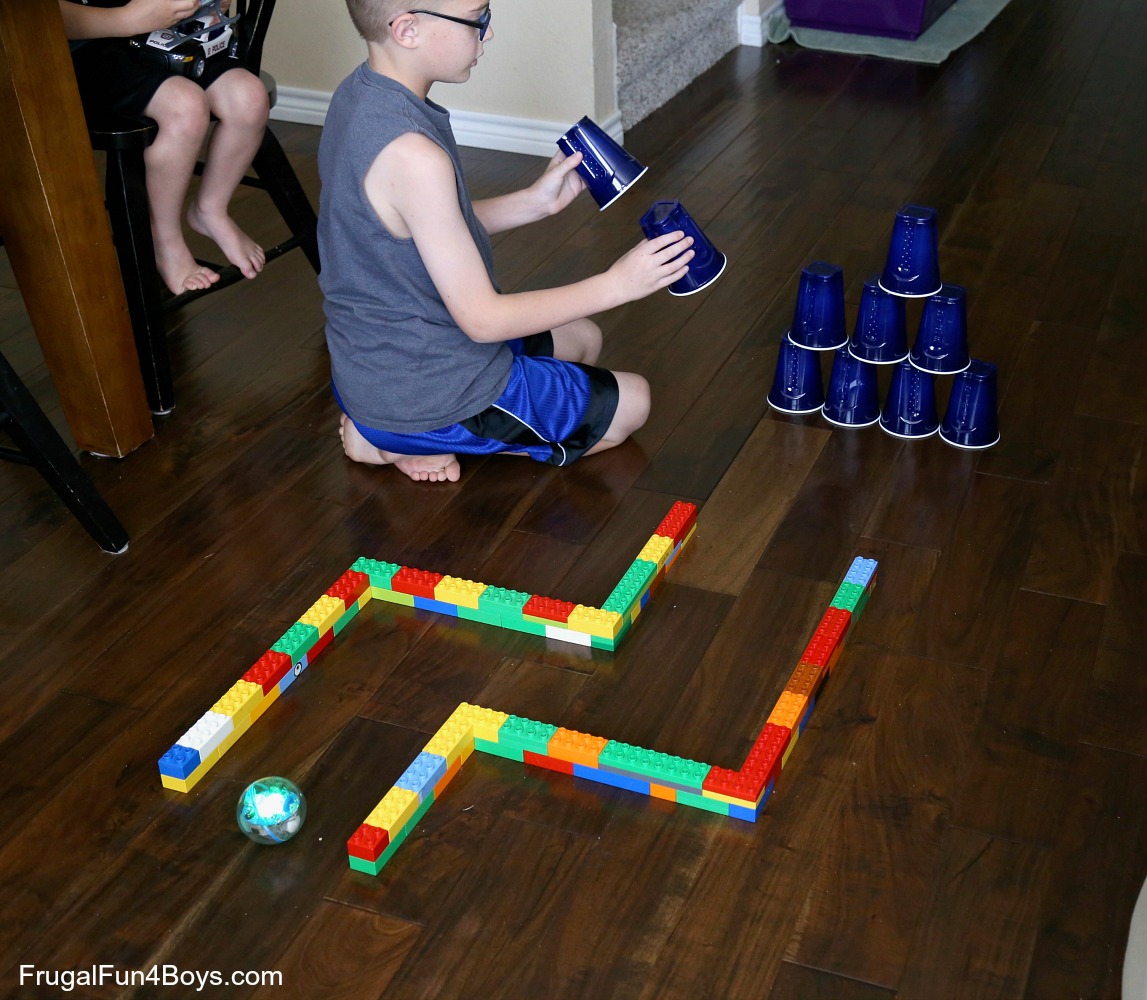 Once we had gotten the hang of our SPRK+ robot, we tackled a larger project – creating a city for our robot to navigate! This project combines art, map skills, and coding all in one. This is such an engaging project to do with a class, and honestly it made a fun family afternoon as well.

We designed a city on long sheets of paper cut from a roll. I taped the sheets together and then flipped the whole thing over so that we weren’t drawing on tape. 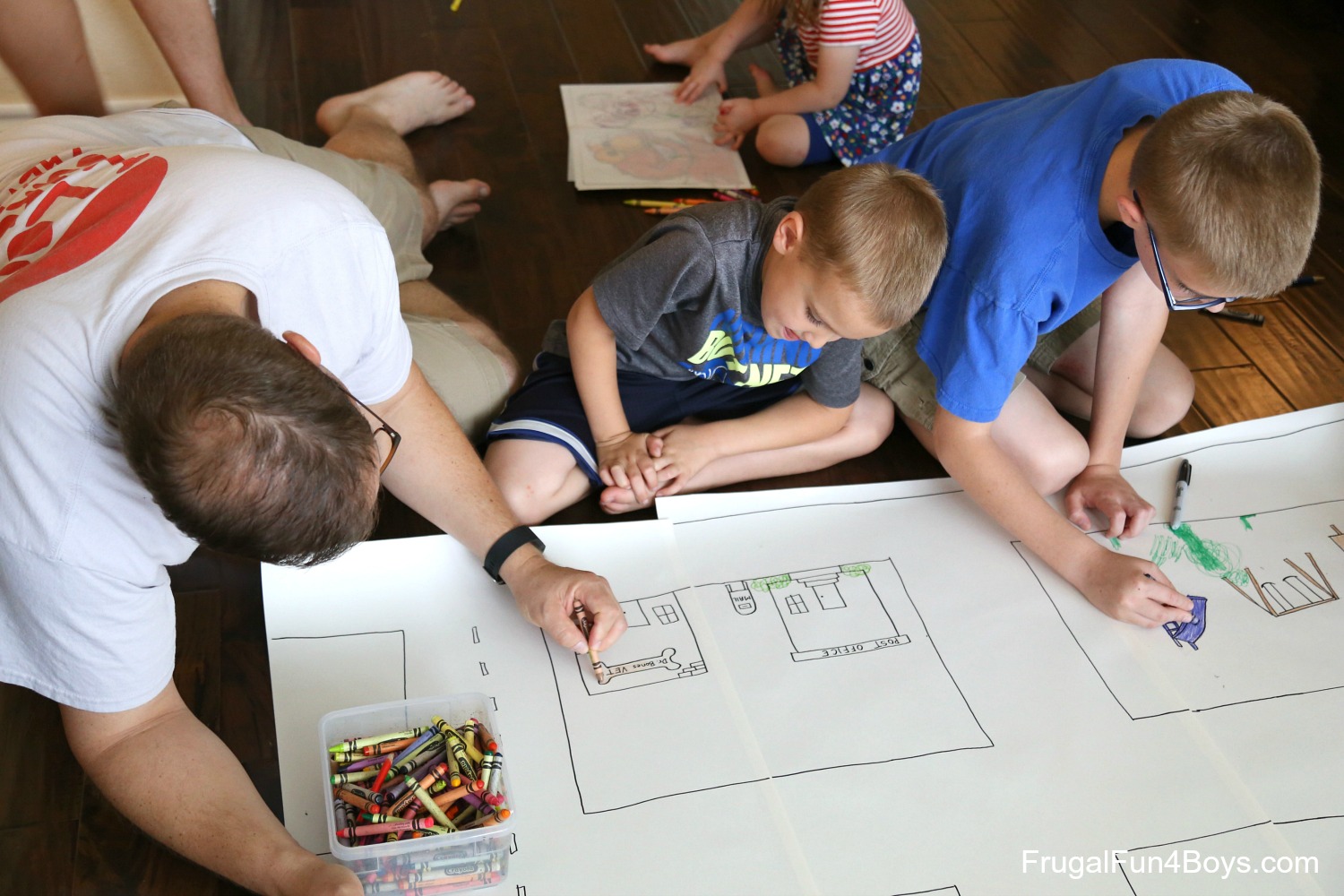 I laid out the streets first, and then the whole family worked together to create buildings of all kinds. We gave our city a town hall, a park, a library, a post office, a fire station, a pet store, and more. 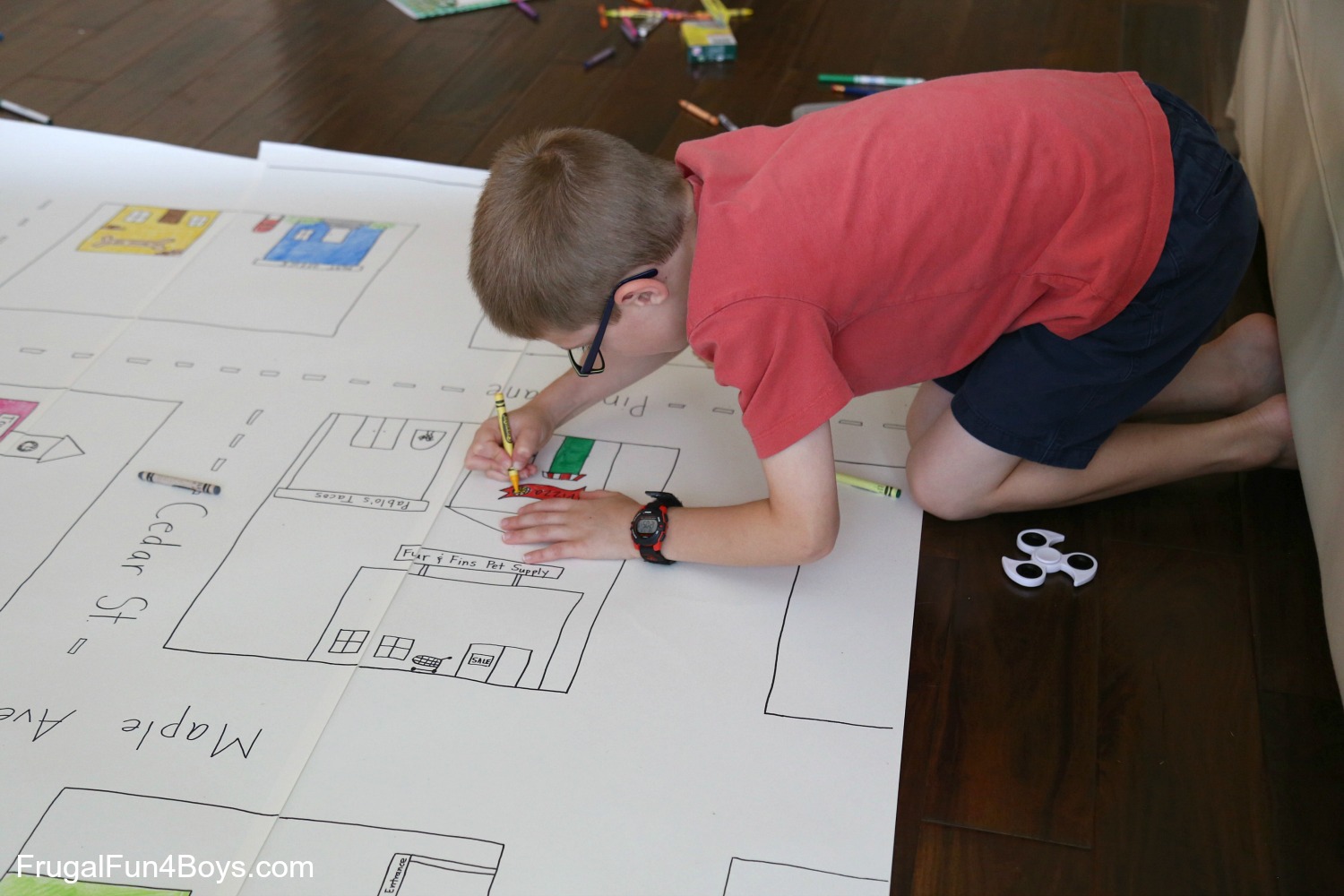 Here’s a picture of our completed city. 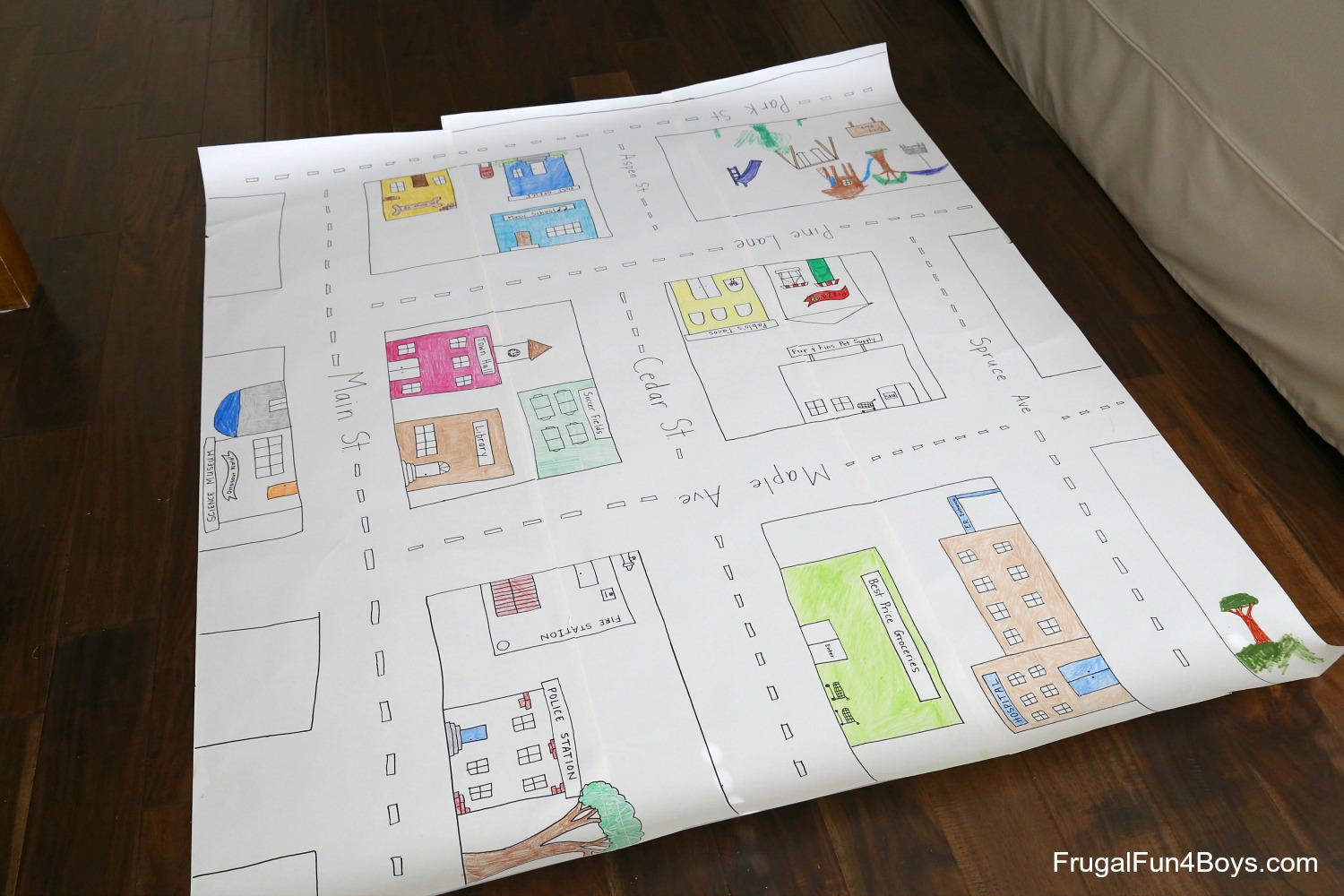 Then it was time to code!

The idea is simple. Challenge kids to write a program that will get the robot from one location to another. For example, from the vet’s office to the pet store, or from the park to the grocery store.

The boys used the protractor that came with the SPRK+ to set the correct angles for it to travel. 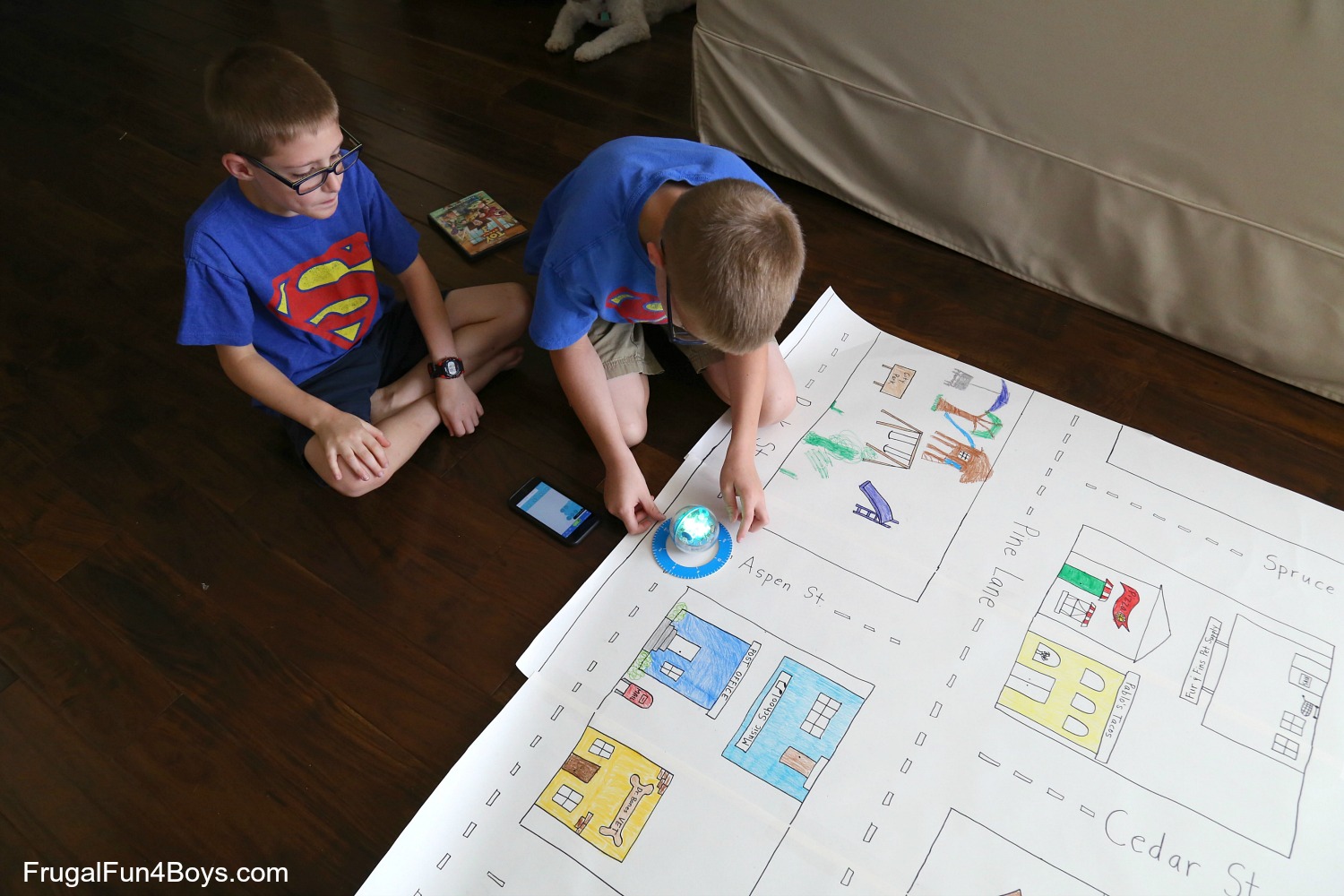 It took a little tinkering to get it just right, but it was so awesome to watch the SPRK+ travel right down the correct streets, making turns at all the right places! 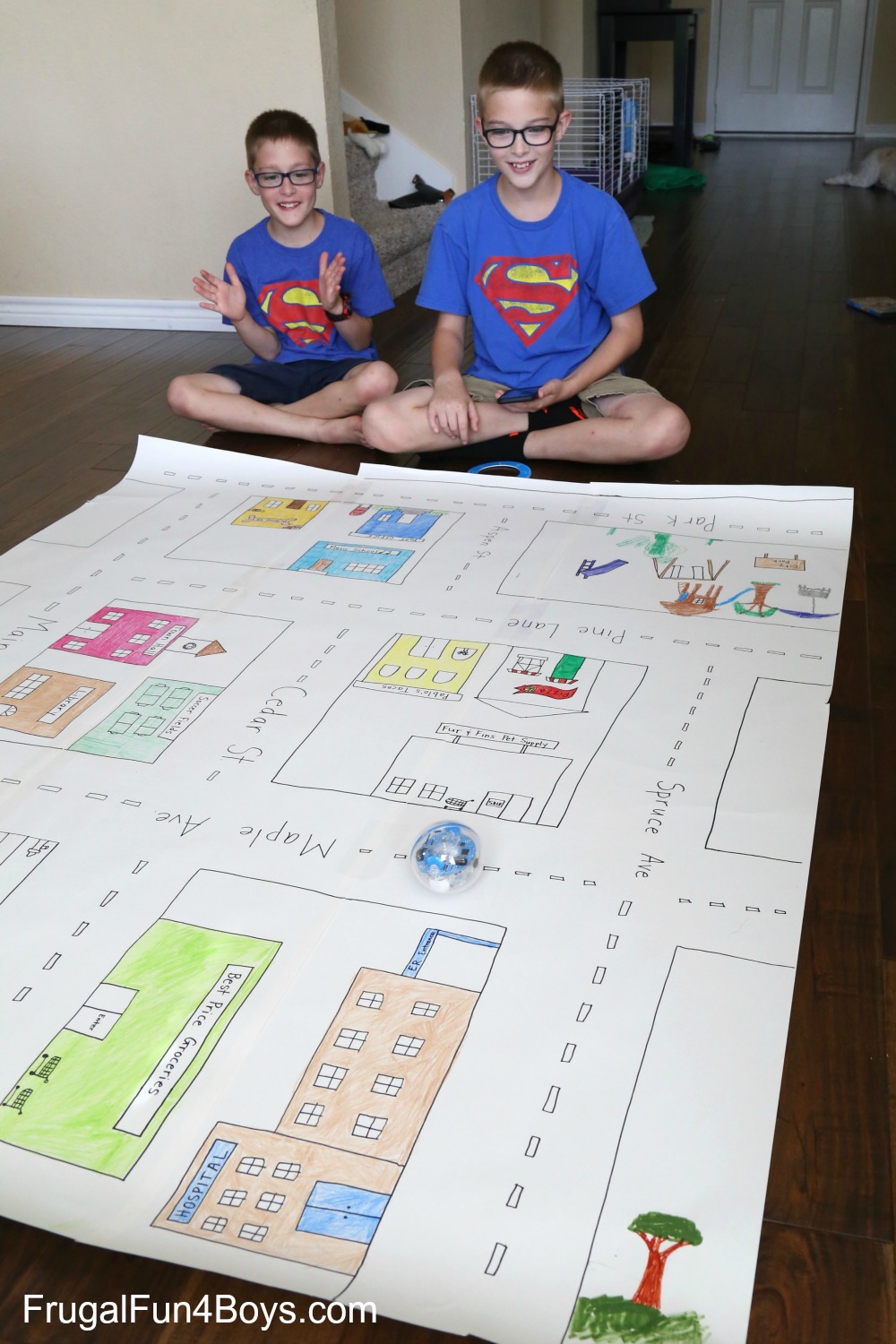 More STEM Challenges with Sphero Edu and the SPRK+

I mentioned earlier that the Sphero Edu app is a great source for inspiration, and wow is it ever! The app allows users to either keep their programs private or to share them with others. Some people even show photos or videos of their program in action. This is a great way to find inspiration for incorporating the SPRK+ into a wide variety of subject areas.

If you are an educator, you’ll also definitely want to visit the Sphero Edu website. There are so many helpful resources. If you are new to coding, you will appreciate the activities that can be used with students. For example, I found one with a game of hot potato using the SPRK+! This activity teaches students how to write if/then statements and understand the concept of loop until and randomness within bounds.

Where to find Sphero Edu

Watch the video to learn more! Then enter to win your own SPRK+ robot!

Enter to Win Your Own SPRK+ 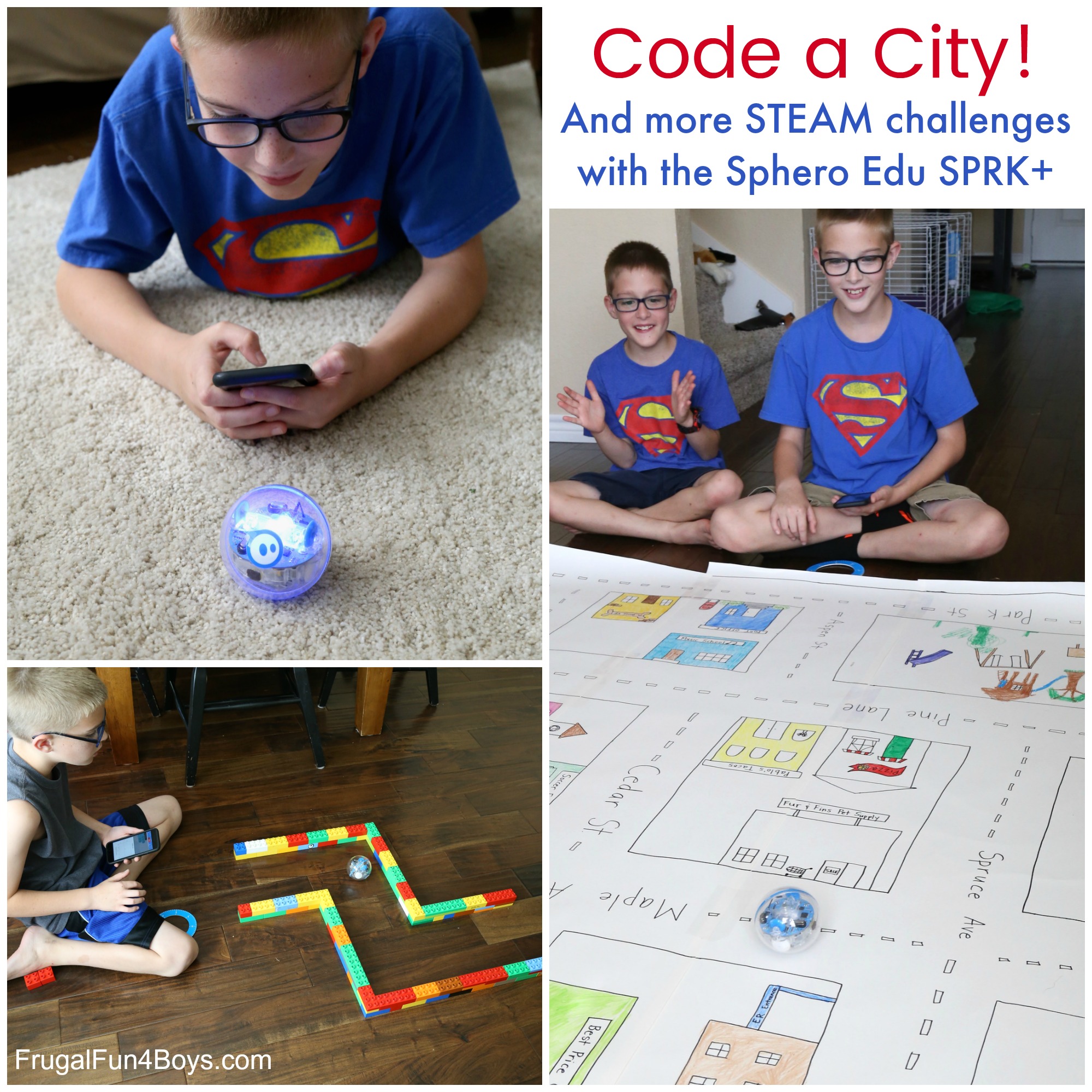 This is a sponsored conversation written by me on behalf of Sphero. The opinions and text are all mine.