One day this summer when we hadn’t really started school yet (but needed some order!) I got out our large acrylic sheet and showed Gresham how to make Venn diagrams. He is a fairly organized kind of guy, so I thought he might like this. I chose his favorite topic for the Venn diagrams – animal attributes.

We got our his collection of Safari Toob animals (which is massive, but not as massive as it would be if the dog didn’t love to chew them up so much!). We used a dry erase marker to make circles on our acrylic sheet. Each circle was labeled with an attribute such as “can fly,” “can swim,” “eats plants,” etc. I started with just two circles and showed Gresham how to place the animals in either circle, or in the overlapping part of the circles if both attributes applied to that animal.

He was instantly hooked! 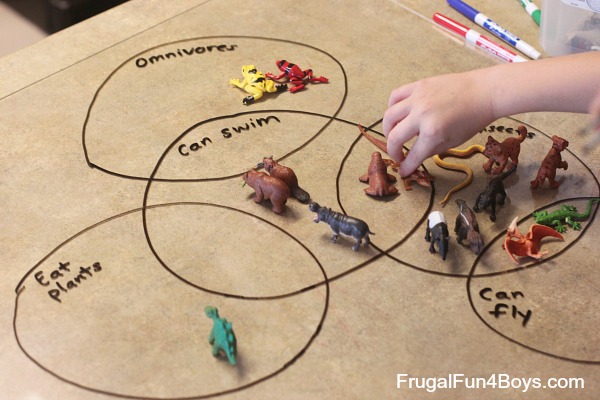 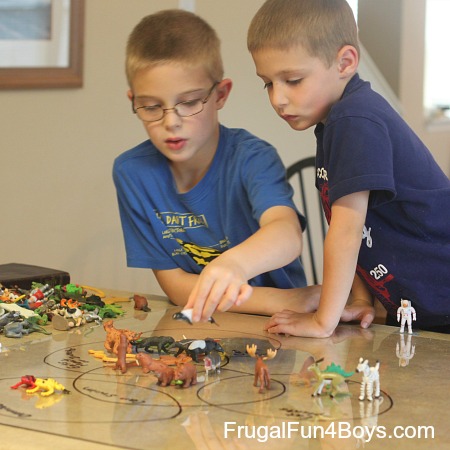 This activity would be a great introduction to studying how scientists actually classify animals. I chose not to use categories such as “mammals” and “reptiles” but instead to go with individual attributes. That way, Gresham was able to discover that some animals have several things in common with each other, but other animals might only have one thing in common. For example, mammals have several features in common, but a lizard and a cat have more differences. Both breathe air and have a backbone, but one has fur, and the other has scales. One is warm blooded and the other is cold blooded, etc.

(Gresham even asked to do this a second time during afternoon rest time one day! I haven’t let on that it’s school work yet!)