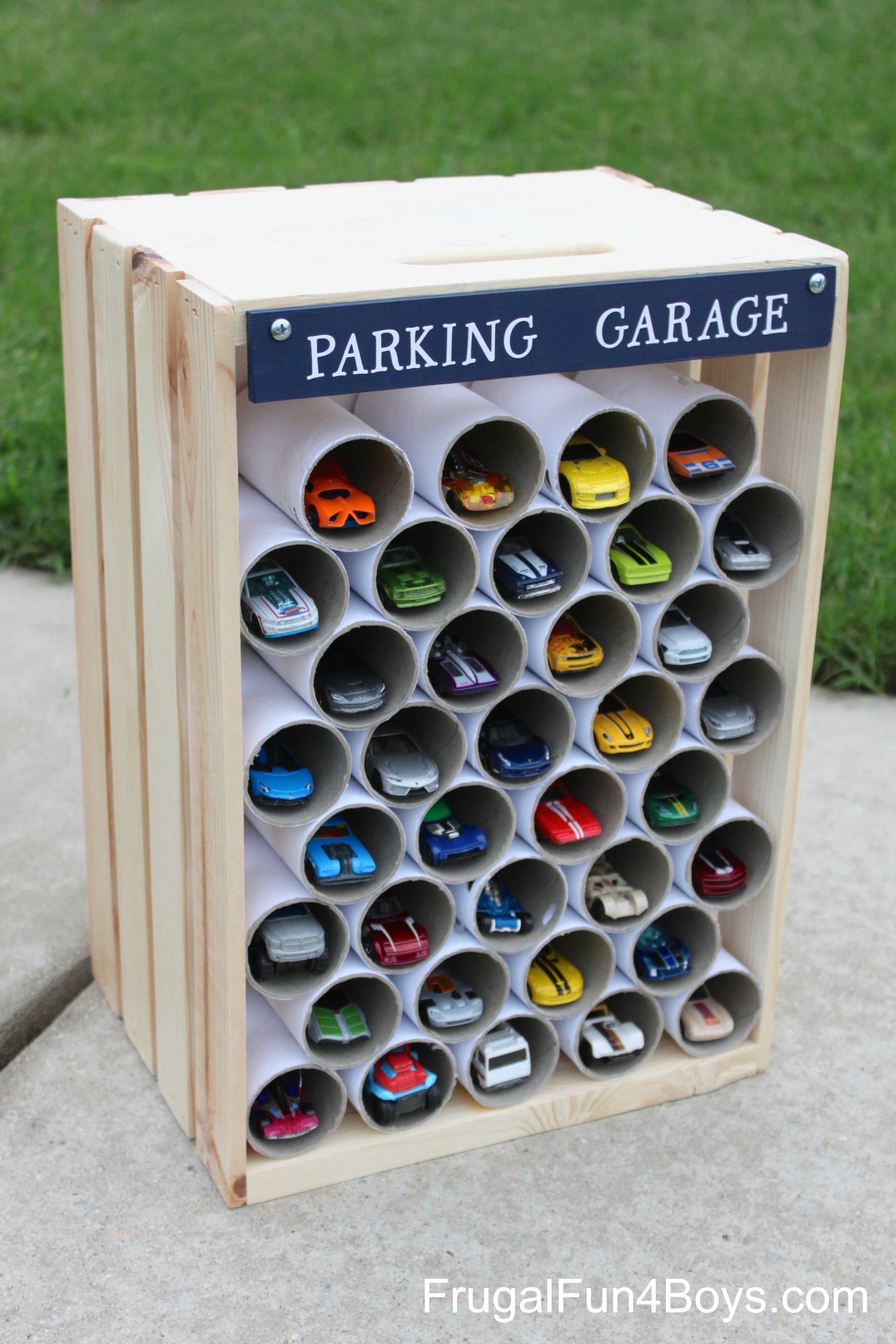 This was really easy to put together, and it looks great in our play room.  We were inspired by this idea on Petit-On that I found on Pinterest.  We own WAY too many Hot Wheels and Matchbox cars!  The boys store them in a large plastic tub, but they are starting to collect favorite models that they don’t want to get scratched up in the big tub.  Now they can park the special ones in our parking garage.

Jonathan (age 3) thinks it’s really neat!  The parking garage is doubling as a toy and storage for him. 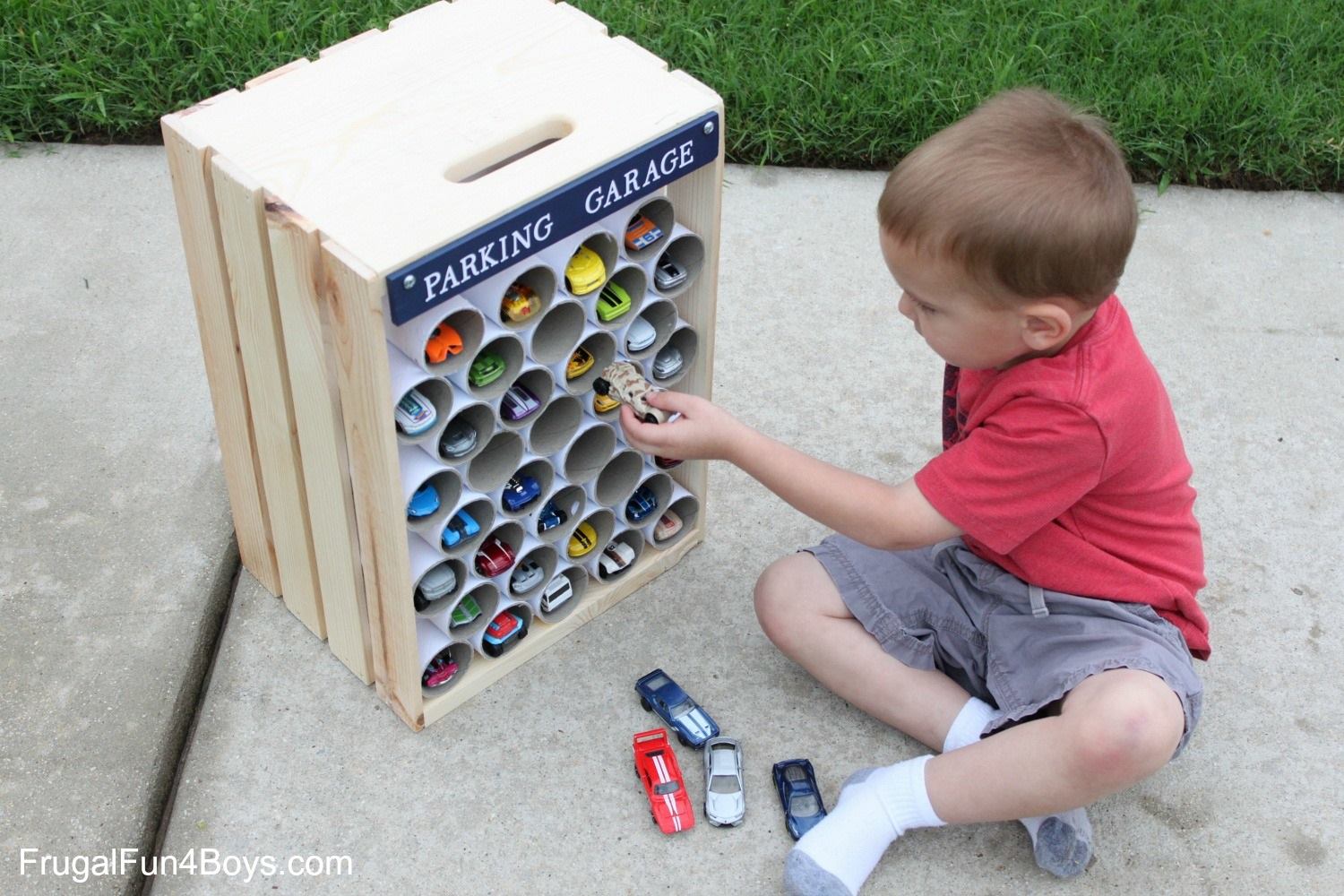 We started with a wooden crate from Michael’s.  They were $13.99, and with a coupon, they’re an even better deal.

Step 1:  Sand your crate.  They come with a lot of rough spots! 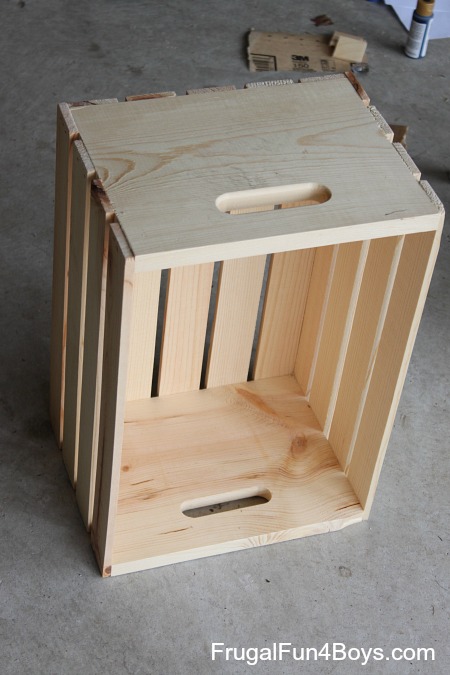 The original idea featured toilet paper or paper towel rolls for the cars.  We decided to use mailing tubes since they are more sturdy, and because we had several left from our mailing tube ping pong ball shooter project.

The mailing tubes that we used were Duck Brand 2 inch diameter tubes.  The length says 18 inches, but the tubes are actually almost 20 inches – you can only pack them with 18 inches worth of stuff because of the stoppers on each end.  Anyway, we were able to cut five 4″ sections out of each tube. (The last section was just slightly short.) 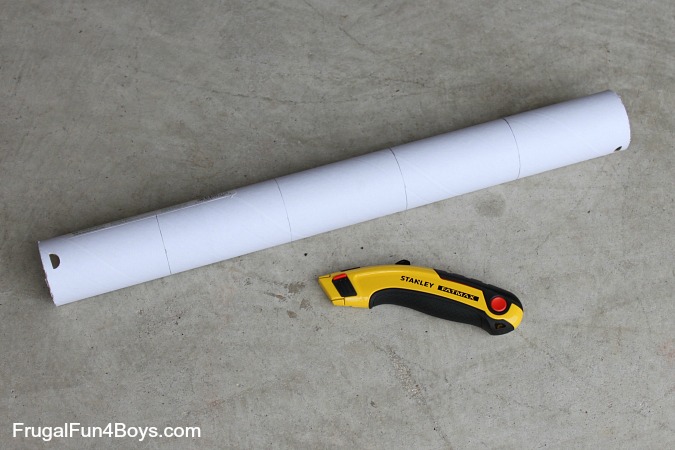 Dad did all of the cutting with a utility knife.  We used 7 tubes total, so 35 sections.

After he cut the tubes, the edges were a little rough, like this: 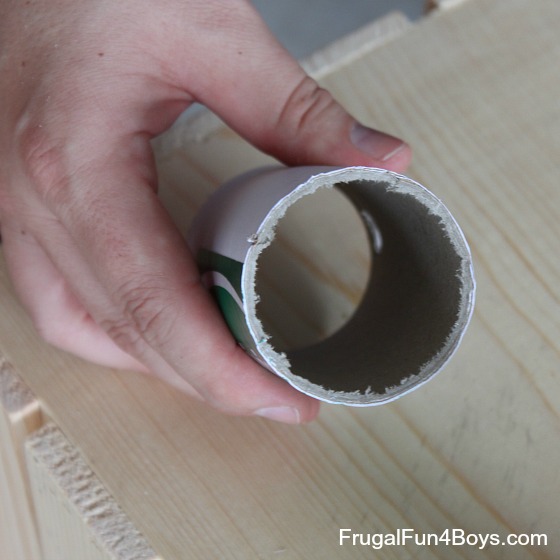 A little fine sand paper fixed them right up! 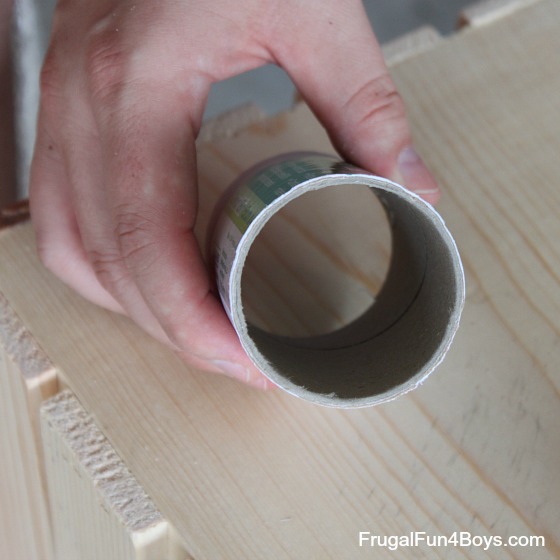 Step 3:  Cut a piece of poster board to go behind the tubes.

He realized that if the boys stuck the cars into the tubes and then they fell out the back end, it would be hard to retrieve them. So he cut a piece of poster board to glue to the backs of the tubes. 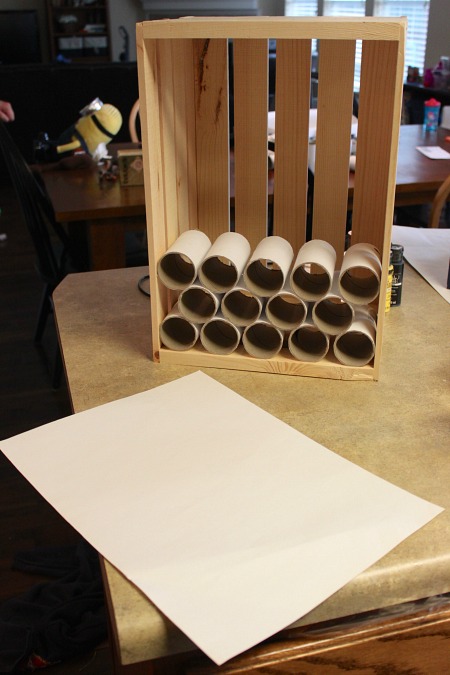 The poster board is a little uneven at the top, but it doesn’t matter because the parking garage sign covers it. 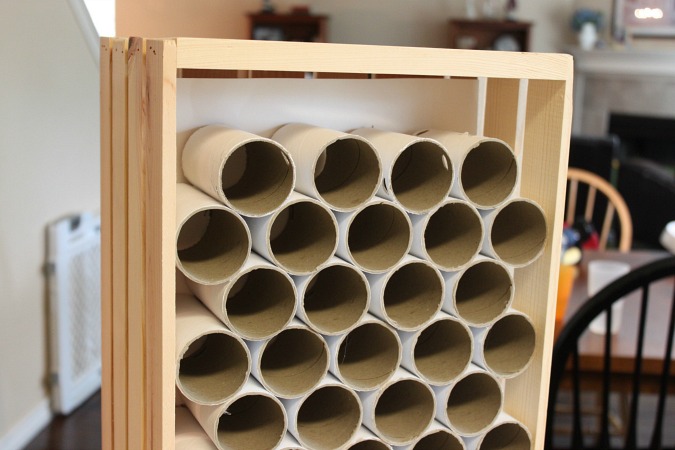 Step 4:  Glue down your tubes, attaching the poster board to the backs of the tubes as you go.

To get the tubes even, my husband carefully glued the bottom row to the crate, making sure that they were evenly spaced.  Then it was easy to glue on the other tubes, one row at a time.  He used a hot glue gun.

For the parking garage sign, I used a 12 inch strip of pine that I bought pre-cut at Michael’s in the wood crafts section (near the crates).  I painted it blue and used sticker letters.  We tried to attach it with wood glue, but couldn’t figure out a way to clamp it on while it dried.  So Jordan ended up just screwing it on with wood screws, and that worked great. 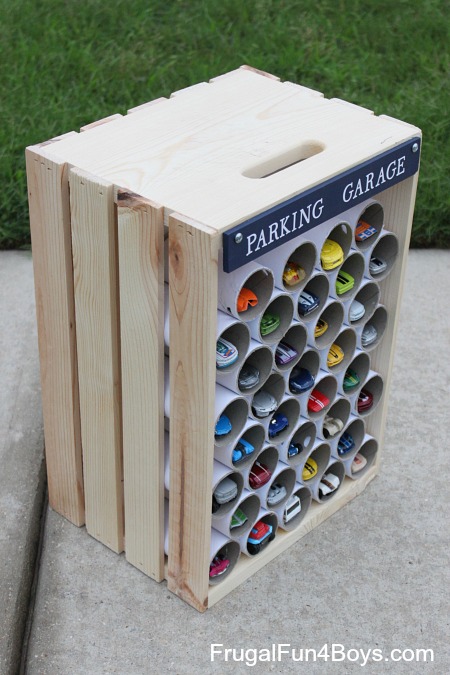 The finished crate is just so cute! 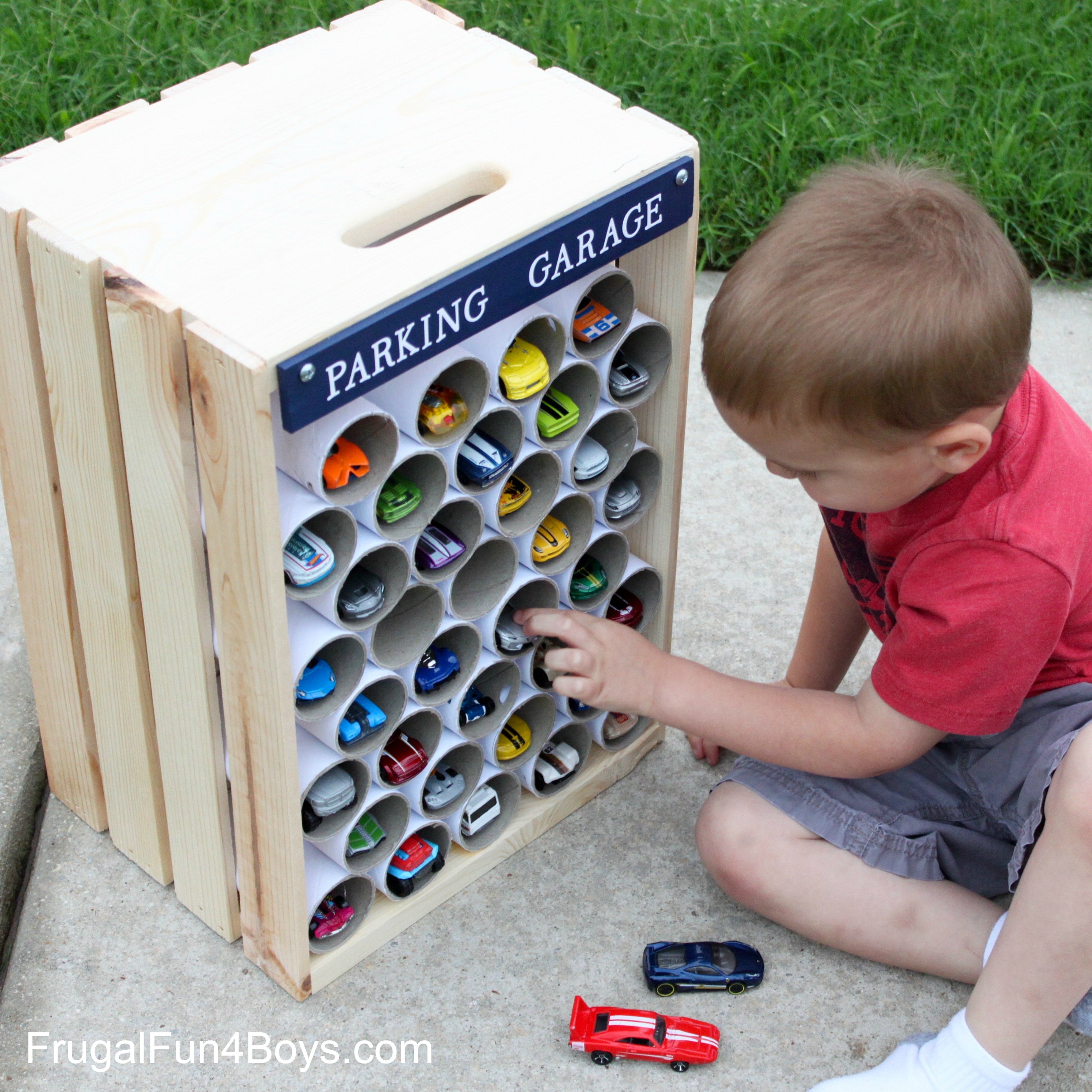