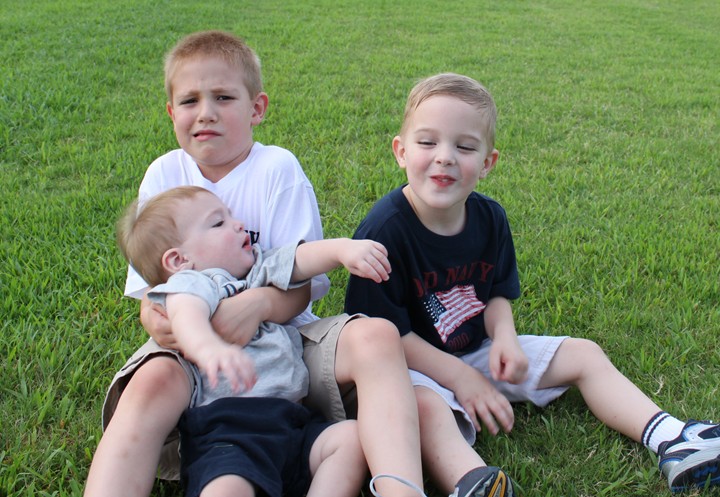 Last night, my husband and I were watching TV when a Mirena birth control commercial came on. I watched it in awe. Awe of the content, and then of the side effects (like permanent infertility) that were serenely read in the background. The commercial depicted a frazzled mom of one child who, upon discovering her unsupervised son painting on his arms and wrapping himself in toilet paper, etc., made a mental note that she definitely didn’t want any more children. At least not for a while.

While I am NOT saying that birth control should never be used, this commercial brought up a couple concerns.

First of all, does it seem to you that boys are more often than girls portrayed in a negative light? They’re so loud, messy, etc. While I don’t dispute the fact that this is true, I believe that God created little boys to be little boys. He didn’t make a mistake when He designed them to want to defend and protect. And with defending and protecting comes a lot of noise, and sometimes things get broken.

(And thirdly, I’m sure that this commercial is acutely painful to people struggling with infertility, but that’s a point for another post.)

Here’s how my morning went… I had planned to take the boys to the park and then grocery shopping, followed by homeschooling in the afternoon. Before breakfast, the boys were already fighting. During breakfast, I went to the bathroom and returned to a barrage of tattling about a child who had threatened to hurt his brother because of a certain toy that he wanted to have. Instead of getting dressed for the park, we sat down with the Bible and talked through the issues at hand. We discussed the fact that they boys were believing the lie that control would make them happy. They were also believing that seeking revenge would make them happy. We opened God’s word together and looked at what He says about revenge and control. What a precious time together, but this took time, and we were already behind schedule.

I sat the boys down with some schoolwork so that I could finish the grocery list and we could get out the door. I ignored the fire ant death zone on the kitchen counter (we put out bait last night) and made a mental note to clean it up during nap time – my next available opportunity! While I was jotting things down on the grocery list, my newly potty trained two year old was saying “Lick it! Lick it!”. I checked to see who was doing what licking, and discovered that the dog was licking poop off Owen’s legs and the floor. Lovely. I then spent the next 20 minutes giving Owen a bath and sanitizing the kitchen floor.

We did finally make it to the park and the store, but I gotta say, if I were basing my happiness on the ease of my life, I would be a very unhappy person!

We know from Psalm 127 that God views children as a blessing. But we also know that children bring trials. What does God say about trials?

James 1:2-4 Consider it all joy my brethren, when you encounter various trials, knowing that the testing of your faith produce endurance. And let endurance have its perfect result, so that you may be perfect and complete, lacking in nothing.

James 1:12 “Blessed is the man who perseveres under trial; for once he has been approved, he will receive the crown of life which the Lord has promised to those who love him.”

Romans 5:3-5 “And not only this, but we also exult in our tribulations, knowing that tribulation brings about perseverance; and perseverance proven character; and proven character, hope; and hope does not disappoint, because the love of God has been poured out within our hearts through the Holy Spirit who was given to us.”

Yesterday, we were in a restaurant, and got a cliche comment – “Wow, you have three boys!” When I told her that we have another boy on the way, she said, “Wow, you must be really patient!” I told her that I was not super patient.

Next time I get that comment, I want to go a step further and say, “No, actually my boys show me daily how impatient I am. But God is transforming me into a patient mom by His grace.”

What is my point with all this? That God values life. He values children. He has a larger purpose in the temporary inconvenience of children. He values transforming me and my children into the image of His Son. In my house, we are years away from any relief from the mounds of laundry and the sticky fingers and the noise. But honestly, getting rid of those inconveniences would not in and of themselves make me a happier person. This perspective makes the upcoming arrival of my fourth son, with all the trials and challenges that a larger family will bring, a source of joy!