So, this is a big topic. And this post is just going to scratch the surface, but I have a few things I really want to say. Let me just say up front that I am not going to take the position that boys should not play with weapons. There is a biblical place for weapons and for war. However, like everything else in the world, this issue is twisted by sin and the fall. 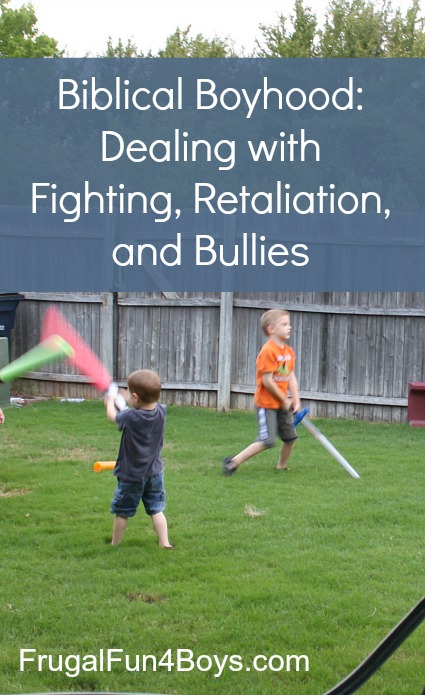 God set up government as an institution to restrain evil.

“Submit yourselves for the Lord’s sake to every human institution, whether to a king as the one in authority, or to governors as sent by him for the punishment of evildoers and the praise of those who do right. For such is the will of God that by doing right you may silence the ignorance of foolish men.”

Violent acts are not the only problem. Sinful anger makes us as guilty before God as if we had murdered someone.

Vengeance belongs to God. He alone has the right to repay.

“Never pay back evil for evil to anyone. Respect what is right in the sight of all men. If possible, so far as it depends on you, be at peace with all men. Never take your own revenge, beloved, but leave room for the wrath of God, for it is written, ‘VENGEANCE IS MINE, I WILL REPAY,’ says the Lord. ‘BUT IF YOUR ENEMY IS HUNGRY, FEED HIM, AND IF HE IS THIRSTY, GIVE HIM A DRINK; FOR IN SO DOING YOU WILL HEAP BURNING COALS ON HIS HEAD.’ Do not be overcome by evil, but overcome evil with good.”

These verses present some important limitations on the use of physical force. We are not to avenge wrongs done to ourselves. In fact, we are to behave in the opposite way toward our enemies and treat them with kindness! We are also not to harbor anger in our hearts against people who have done wrong to us because that is the same sin as acting on the anger. The government is set up by God to restrain evil, and I think that it is clear from that point (see also Romans 13:1-7) that vigilante-type vengeance outside the law is also prohibited. 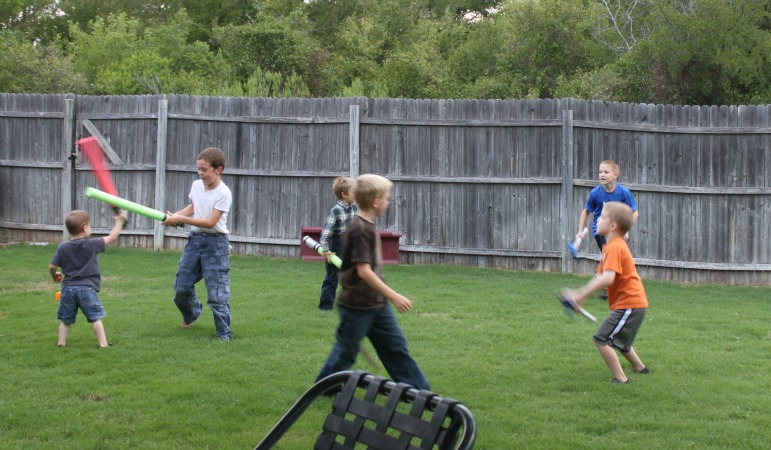 Living out these scriptures is made more difficult by the fact that we are fed all kinds of lies by the culture around us.

While I see very little redeeming value in video games with realistic violence, taking away weapons from a boy who is really drawn to them doesn’t solve the problem. It’s kind of like telling a bird not to fly. When we go to the park, the boys are on the lookout for the best “gun stick!” I’ve seen drinking straws and pretzels bitten into just the right shape used as guns. It’s not wrong to play nerf sword duels or dress up like a sheriff with a pistol.

So where is the line at which these things become a problem? It’s when kids start to disobey some of the commands from scripture that we saw above. A desire for revenge, a desire to control, actions done in anger, etc. In our house, wrestling starts out as a lot of fun. However, sometimes they get hit a little too hard and it hurts, so they get mad and hit back a little too harder. This is now a problem! Our kids need us to shepherd their hearts as they navigate situations like this. We can help them see what is going on. “That really hurt, didn’t it? It looks like things are getting too rough and no one is having fun anymore. It’s time to take a break. Remember that God doesn’t want us to act out of anger.”

I wrote a post on things to consider with toy weapons (aiming at people, etc), so check that out if you are interested.

The Lie: Revenge will bring a sense of satisfaction.

While writing this post, I kept thinking of a line from Inigo Montoya in The Princess Bride: “Hello, I am Inigo Montoya. You killed my father. Prepare to die.” As funny as that movie is, it simply isn’t true that an act of revenge will settle an issue in our minds! There never seems to be enough revenge. If one of my children hits another, the child that got hit will usually attempt to retaliate. I’ve never seen the child that was retaliated against say, “Oh yes, I deserved that revenge. We’re done fighting now, and let’s be friends!” Instead, what happens is that one child hits, the other hits back, so the first throws a pillow, so the second hits with a pillow, etc. This is why God gave us government for the punishment of evildoers! Things would not go well if we all carried out our own justice!

Refer back to Romans 12 above. An act of kindness will break the cycle of fighting, not an act of revenge.

This is also why our culture’s advice to “hit a pillow” or “do some kickboxing” or something like that when we are angry falls short. It IS good to exercise, and doing something active can be a great release for boys. But at the same time, the Biblical solution for anger is not to channel it in another direction. It’s to replace anger over our circumstances with trust that God’s way is best, that He will deal with our enemies in His timing, and that He is at work for our good even if that involves patiently enduring hard things at times. We need to trust that God doesn’t need us to sin (with revenge, mean words, intimidation, etc.) to provide what we need.

Now let’s talk about bullies. What about kids who are truly bullies? Isn’t it wrong to tell our sons that they can’t fight back against a bully?

Here are some things to think about that will hopefully be helpful regarding bullies:

Teach your kids that anger is a warning sign. If you are playing and start to feel angry, or something happens that makes you angry – it’s time to stop and think! (And pray!) Do not proceed when you are angry.

Weapons Licence: One idea that we had recently is to make the boys each a weapons license. Using weapons is a privilege for children (and adults!). People who don’t follow the rules don’t get to use toy weapons! The license (an index card) can be revoked for a certain amount of time for acting inappropriately with weapons. This solves of the problem of “Dad took my bow and arrows away, so now I’ll build myself a new one,” or “I can’t have my nerf gun so I’ll shoot my noise-making rifle instead.” All weapons are off-limits until the license is back!

Pray for God to work in the hearts of your children.

Implement a procedure for dealing with anger. Only God can change our children’s hearts! However, it is beneficial to develop godly habits in their lives. Teach your children a specific procedure to follow when they are becoming sinfully angry. Some suggestions: quoting a verse about anger or kindness or the tongue, praying before acting, coming to mom or dad for help.

For more information: The pastor of our church recently did a sermon series on anger as part of a larger series on the Sermon on the Mount. You can find the audio here – scroll through the sermons and look for a 3 part series on anger. This series was very helpful in writing this post!