Got dinosaur fans?  Here are five LEGO® dinosaurs to build!

(Actually, now it’s SIX! This post was originally posted in April 2015 and updated with new dinos in September 2021.)

My kids love the dinosaurs from the Jurassic World sets, but they also love constructing their own dinosaurs. You really can build anything out of LEGO bricks!

This LEGO® project was another family effort!  The dinosaurs in this post were built by myself and my 12 and 14 year old sons. 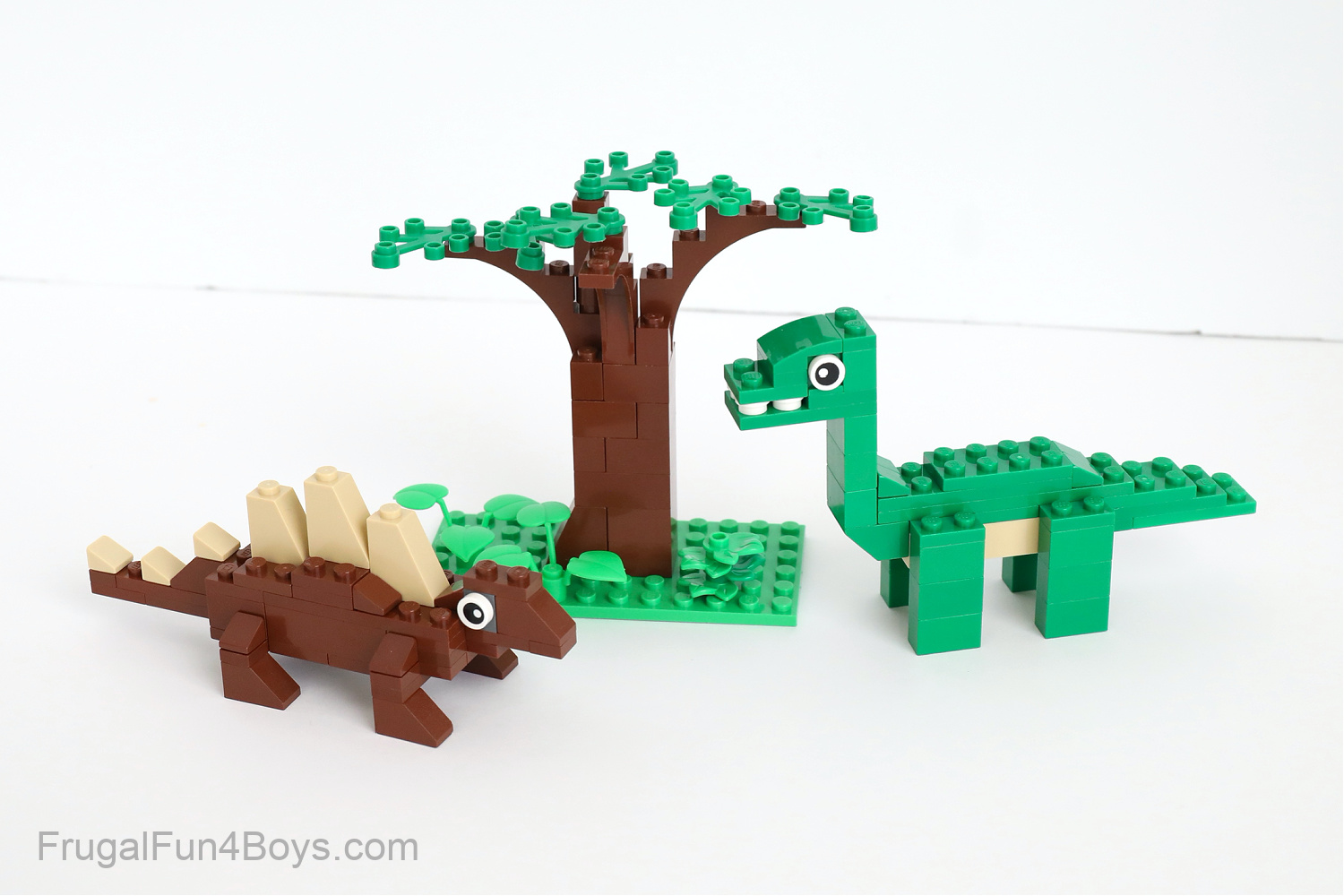 It’s so hard to choose a favorite! We made a stegosaurus and a long-necked dinosaur. You can decide if it’s a brachiosaurus or a diplodocus or what. Then an ankylosaurus, a Tyrannosaurus rex, and a dilophosaurus (the one with the fills). And a pteranodon! 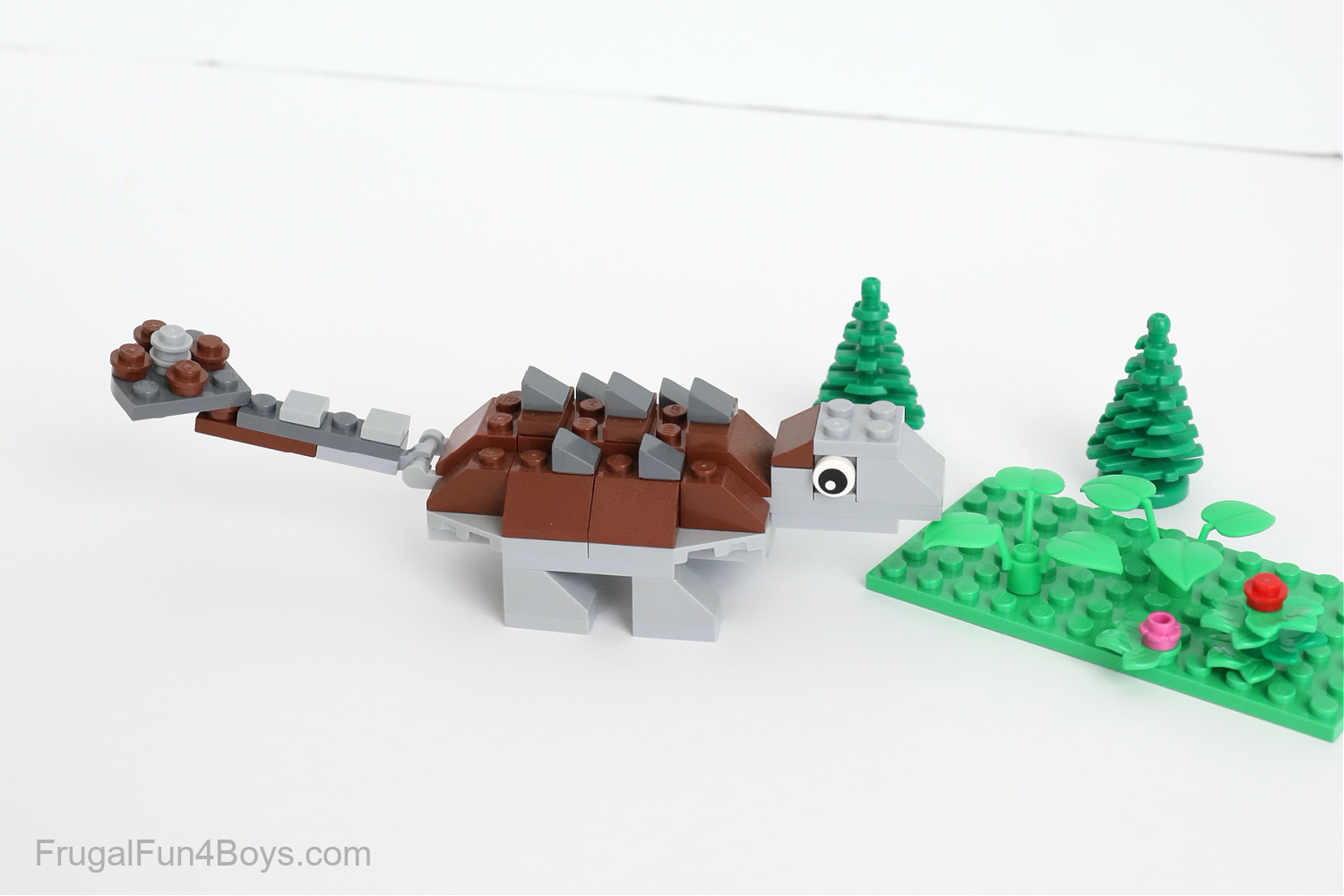 Build your own LEGO Dinosaurs

We don’t have full step-by-step instructions on this one as I have been struggling to keep my head above water lately. I did do partial instructions for the ankylosaurus.  Hopefully your kids will be inspired by the pictures, and feel free to ask questions if there is something that they can’t figure out.

This post contains Amazon affiliate links, which means that I earn from qualifying purchases. 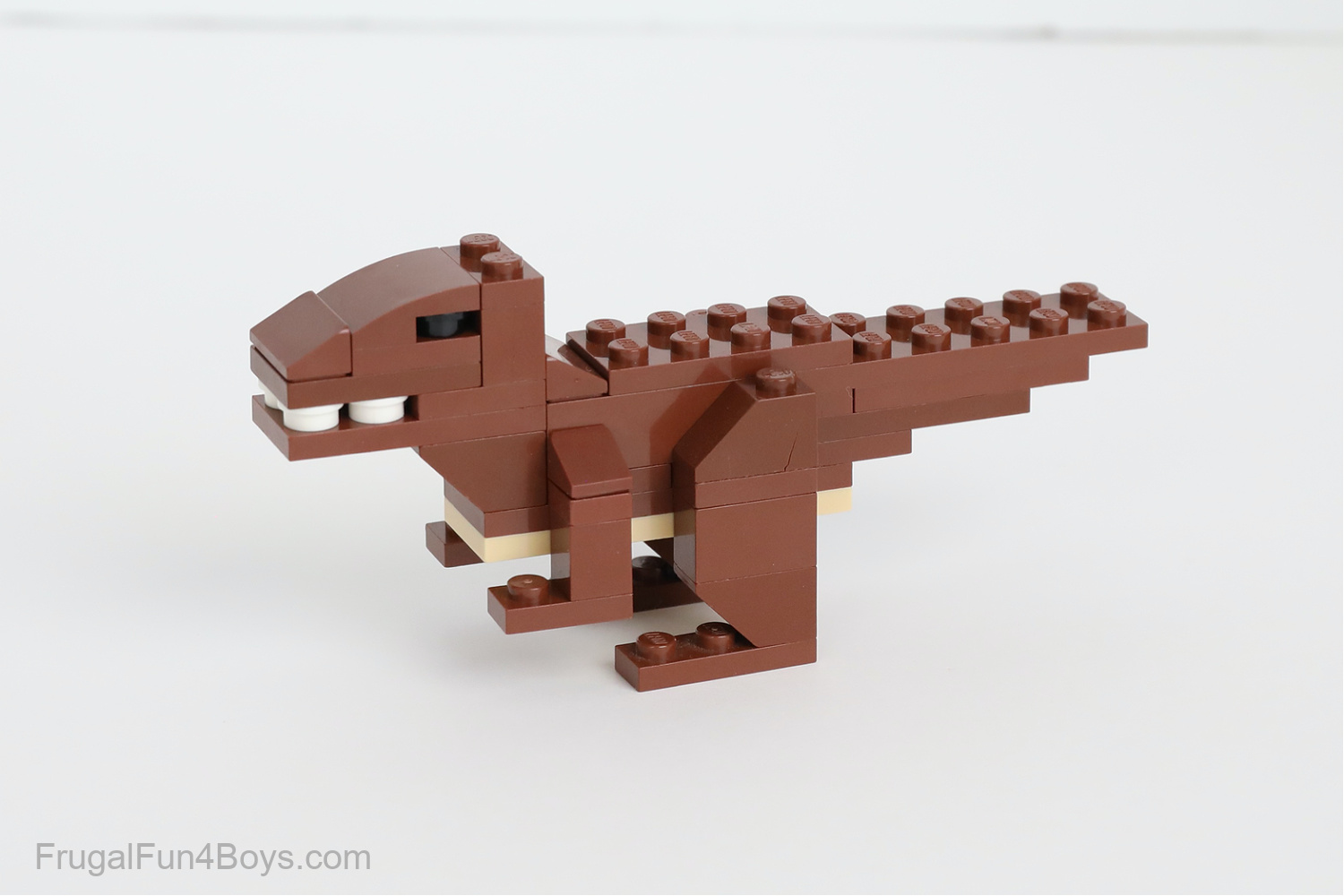 This cool T-rex is in our book Epic LEGO Adventures with Bricks You Already Have, if you’d like to have full instructions. It’s the baby T-rex. That book also has several other dinosaurs included an impressive posable T-rex!

This stegosaurus has a body that is 3 studs wide. The head is 1 stud wide. The eyes are attached to a 1 x 1 dark gray brick with studs on two sides.

In order to make the body 3 studs wide, you’ll need to connect plates that are 2 studs wide and 1 stud wide. 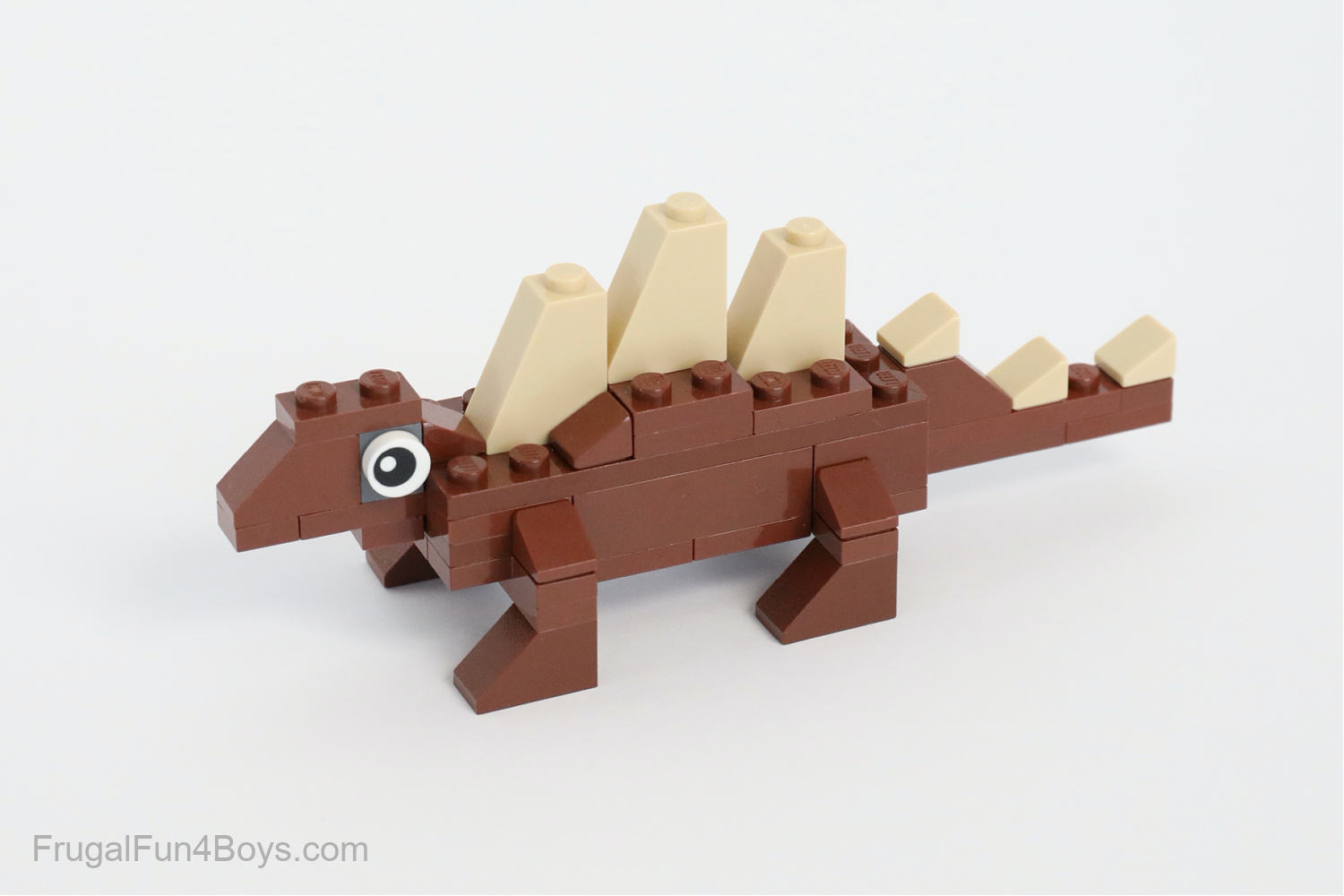 The ankylosaurus is so cute and not difficult to build! 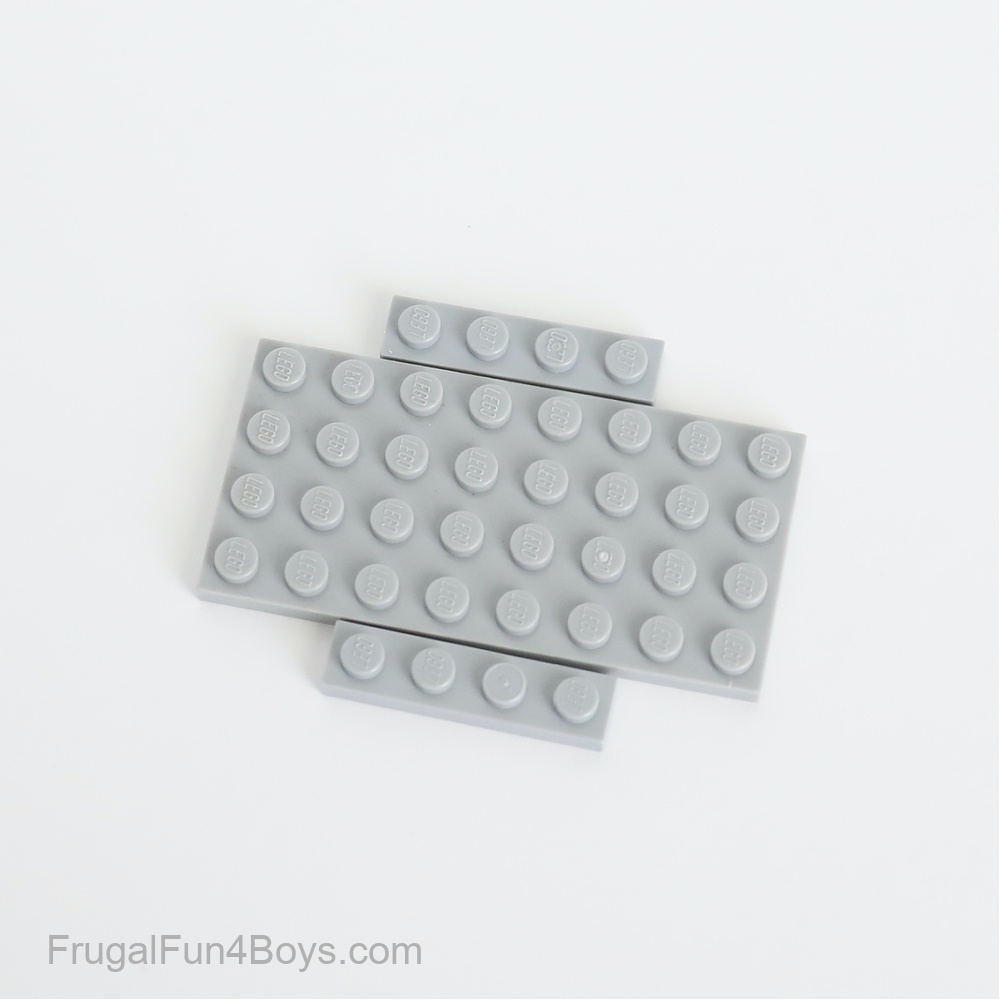 On top of those, attach two 4 x 6 wedge plates with cut corners. On one end of the body, add a 1 x 2 light gray plate with a handle on the side and a 2 x 3 light gray plate. The handle will hold the tail. 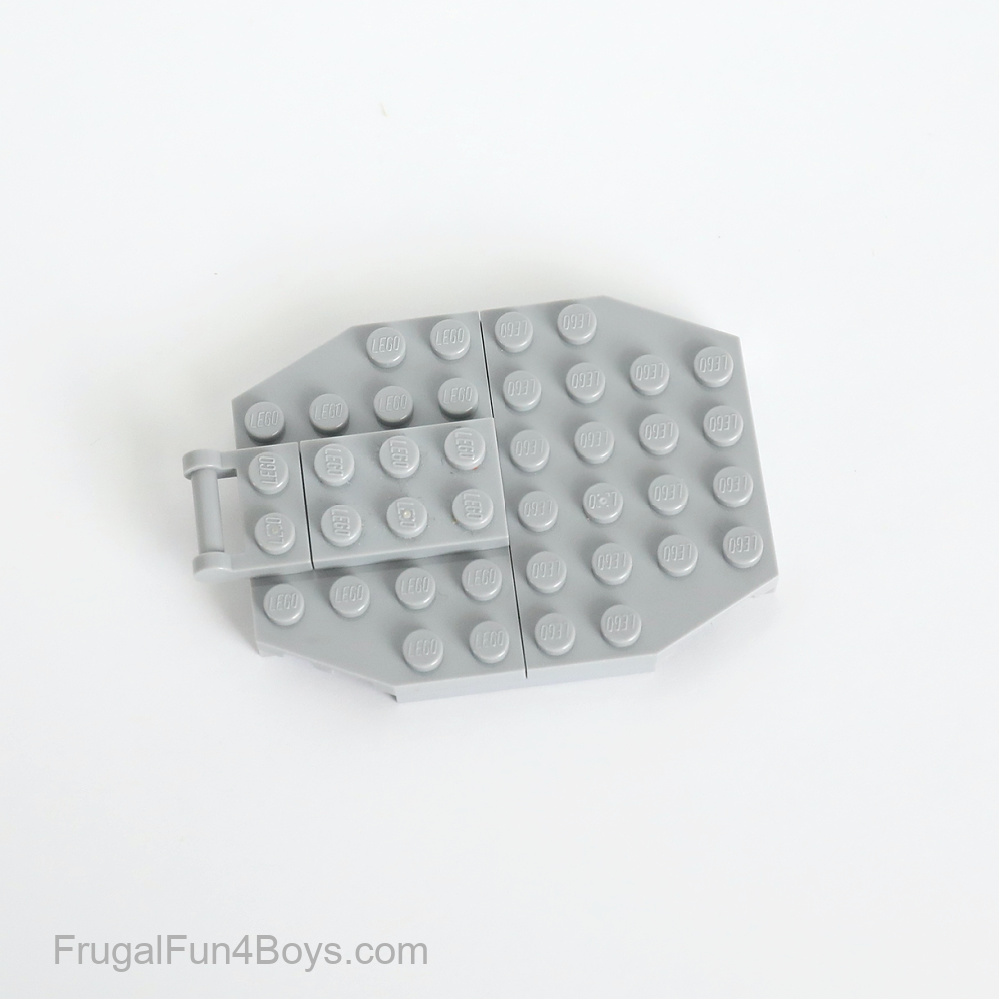 Next, add a 2 x 8 light gray plate. Build the head on top of this plate by adding bricks with studs on the side and eyes. I used a 2 x 2 slope for the nose. I also added a 2 x 3 plate under the head. 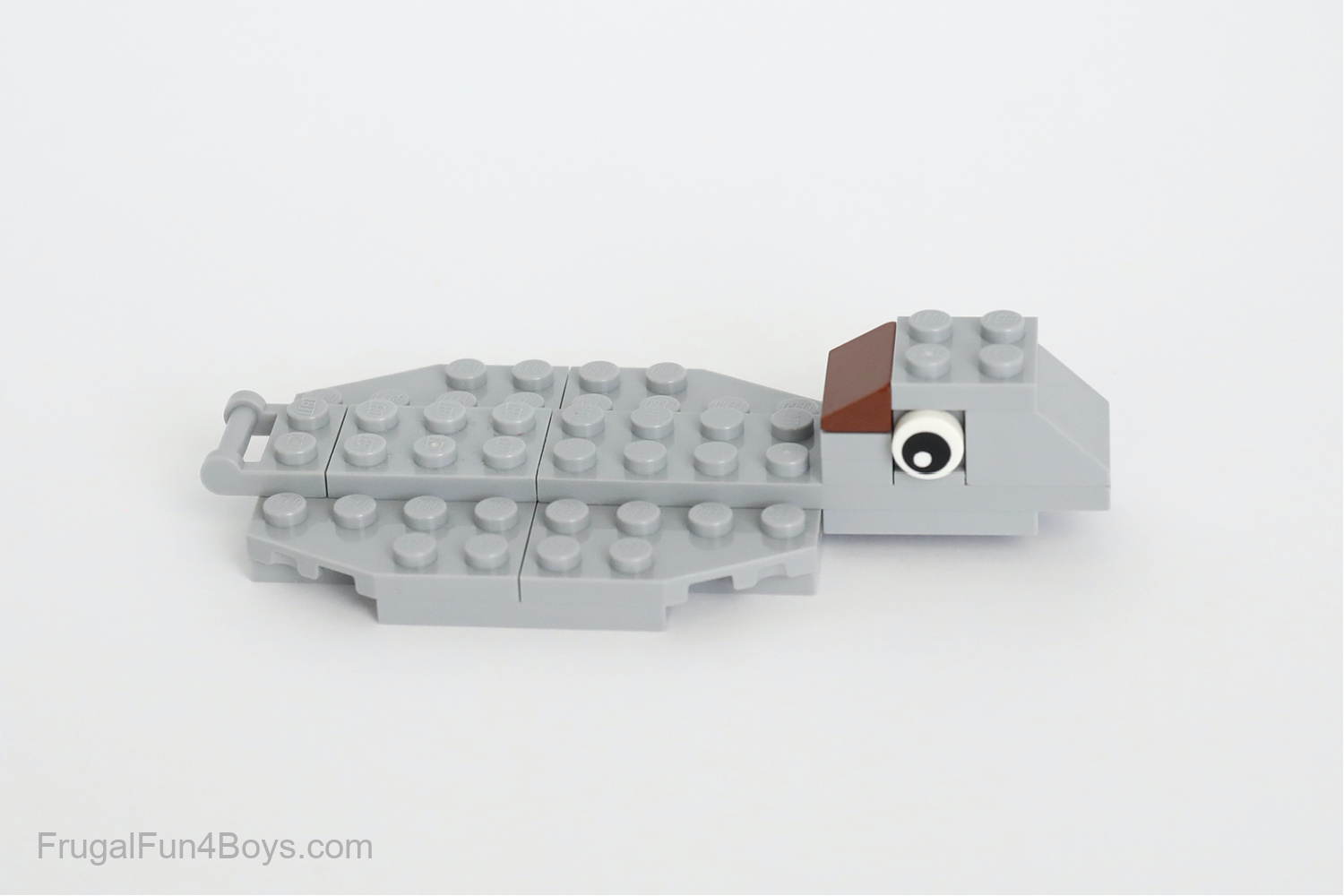 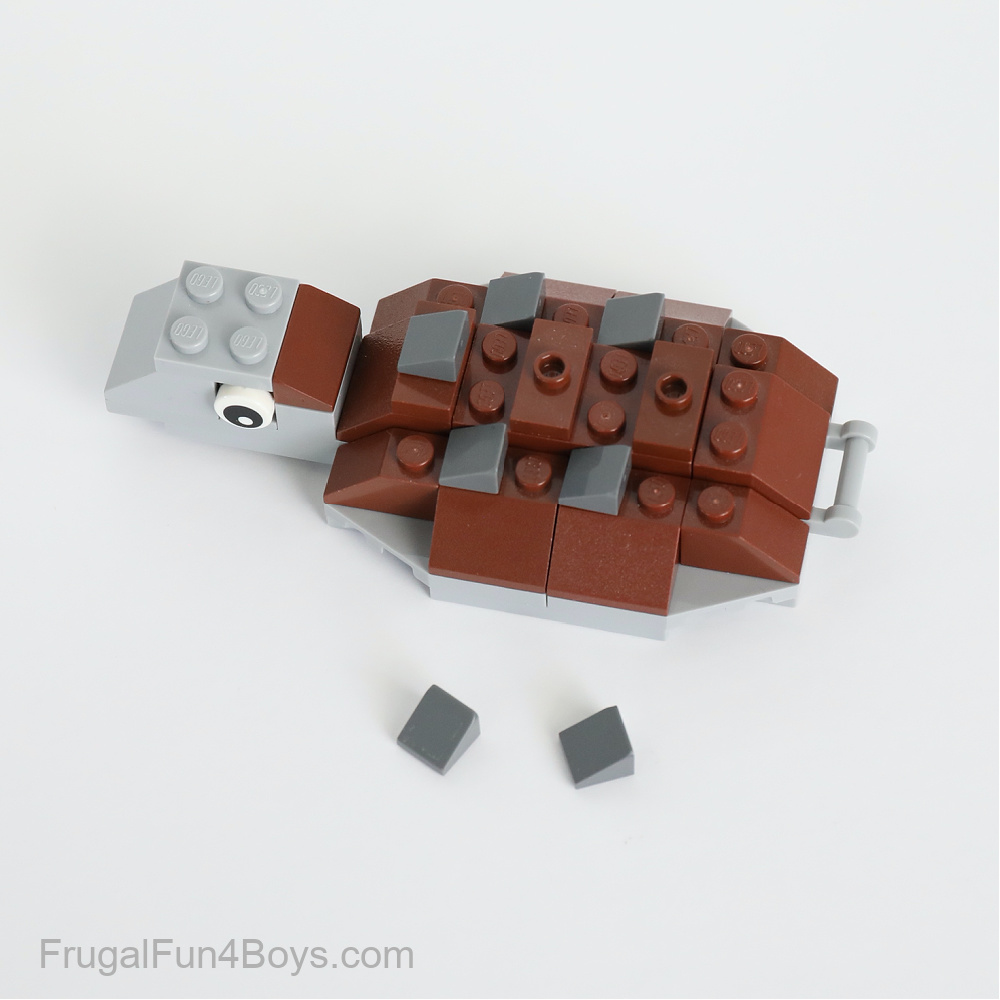 Add some legs. I used 1 x 2 light gray slopes for the legs/feet. I also added two 2 x 4 light gray plates on the underside of the body. 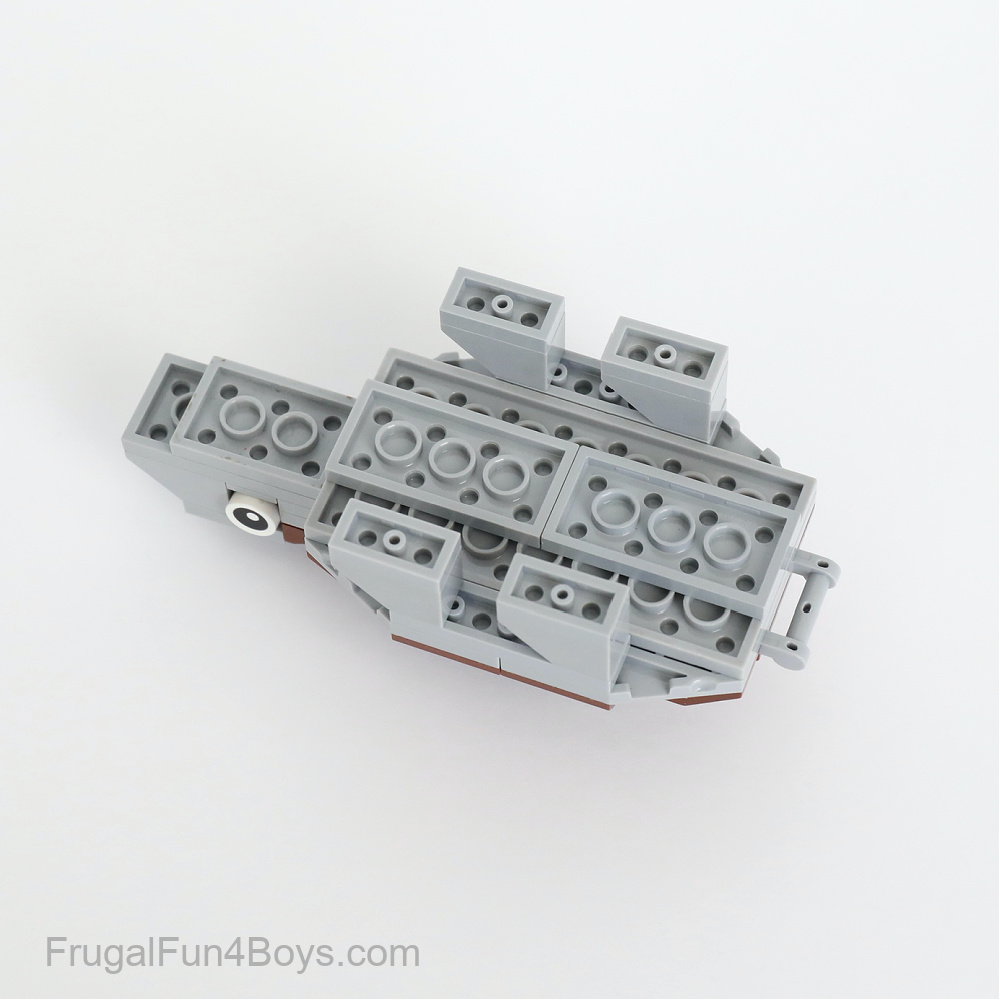 To finish the ankylosaurus, just add a tail. You can build the tail however you like. Add a 1 x 2 plate with a clip on the end so that you can clip the tail to the body. 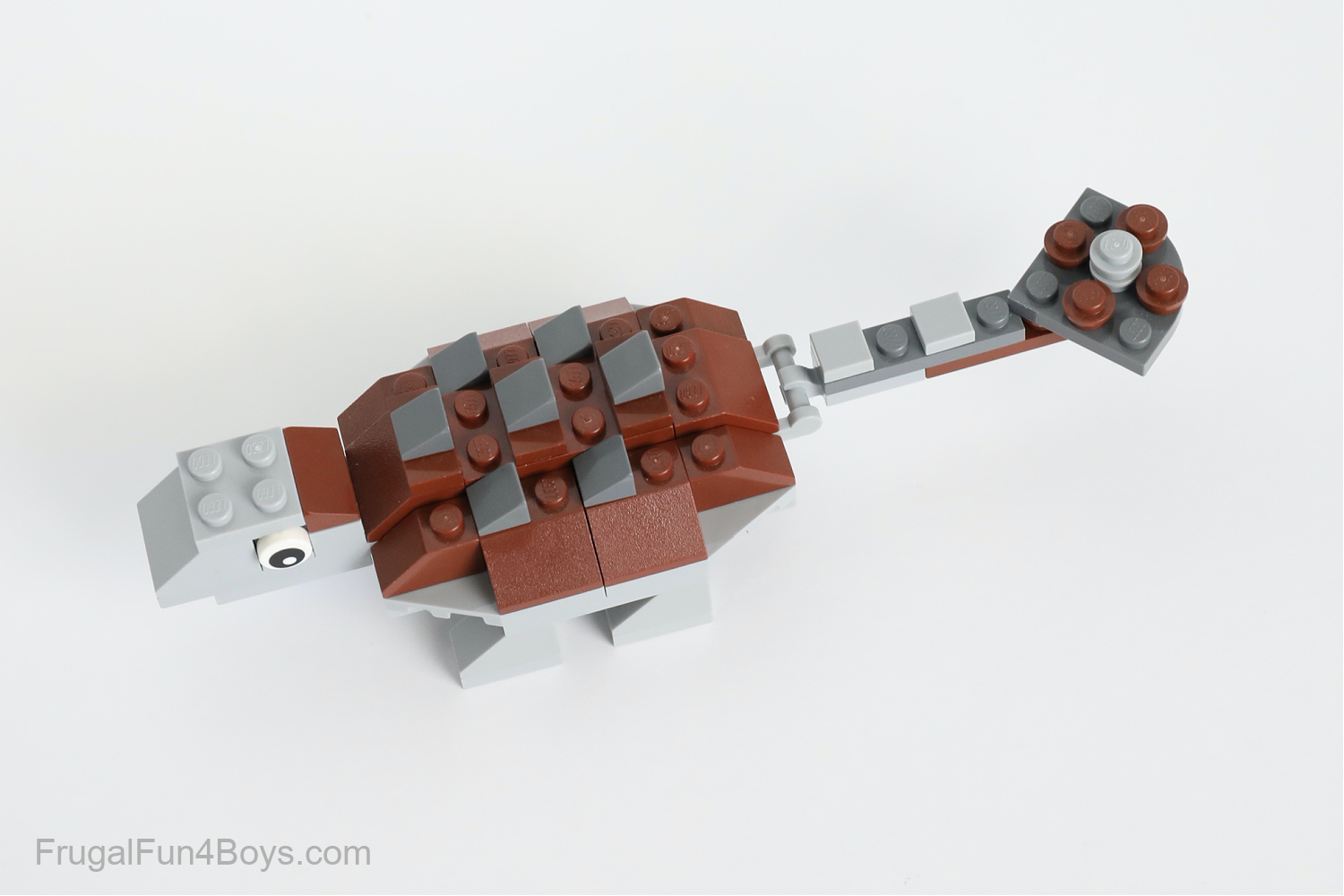 Dino #4:  Brachiosaurus (or whatever long necked dinosaur you want it to be!) 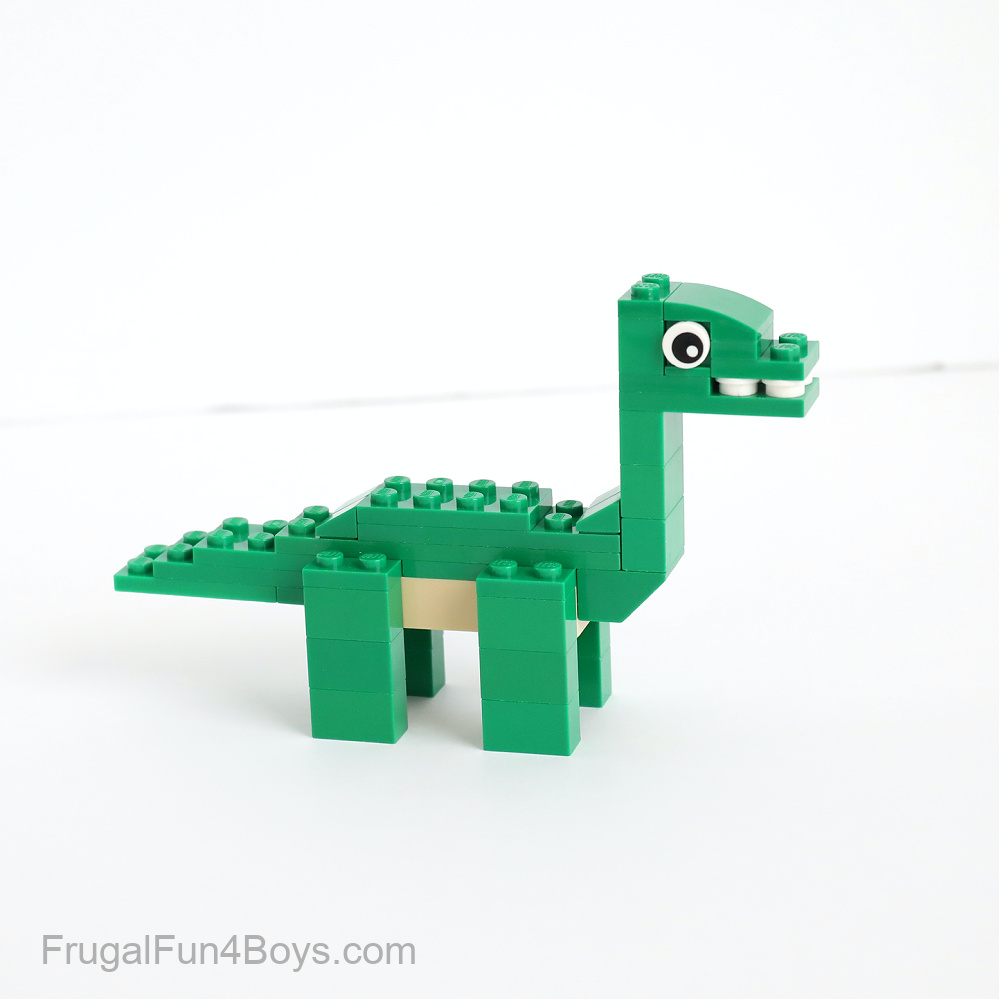 This dino is a really simple construction. You can probably figure it out from the pictures!

The legs are attached to 2 x 4 green plates that run sideways across the body. 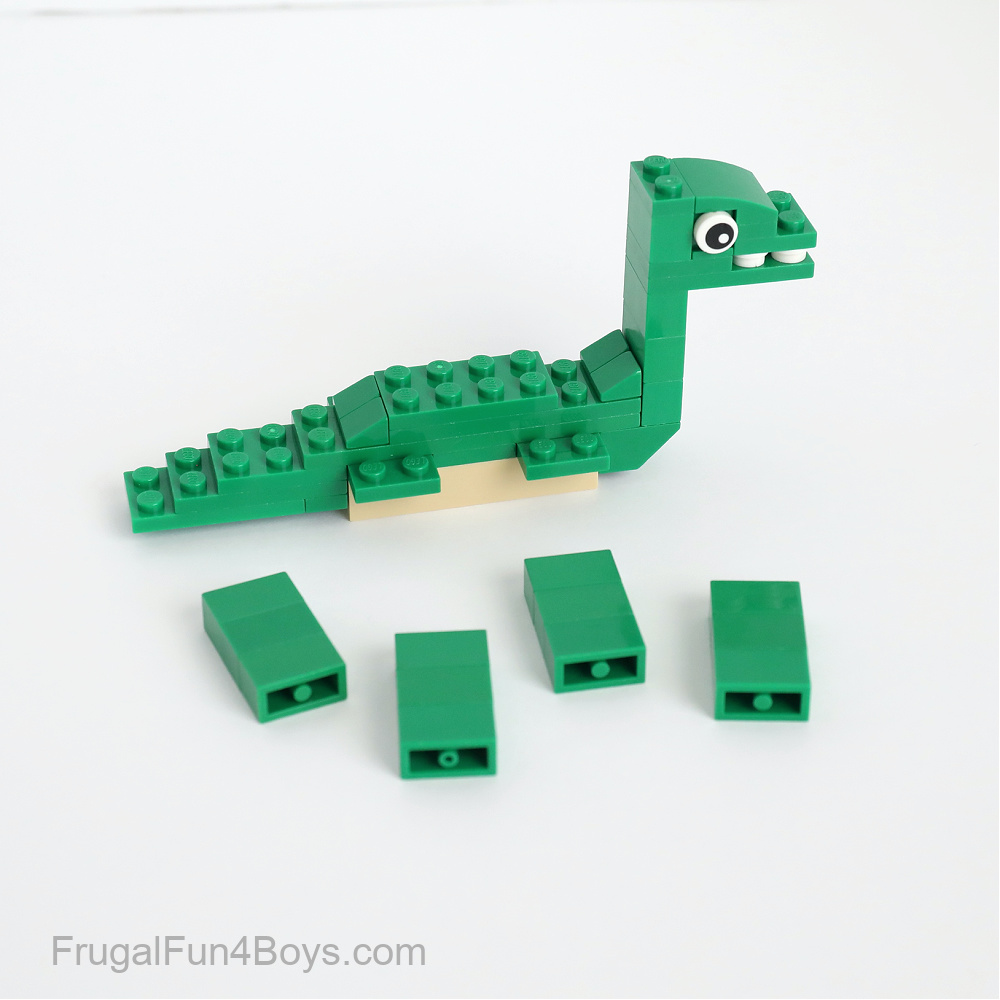 My son created this cool frilled dinosaur! I love how it turned out. 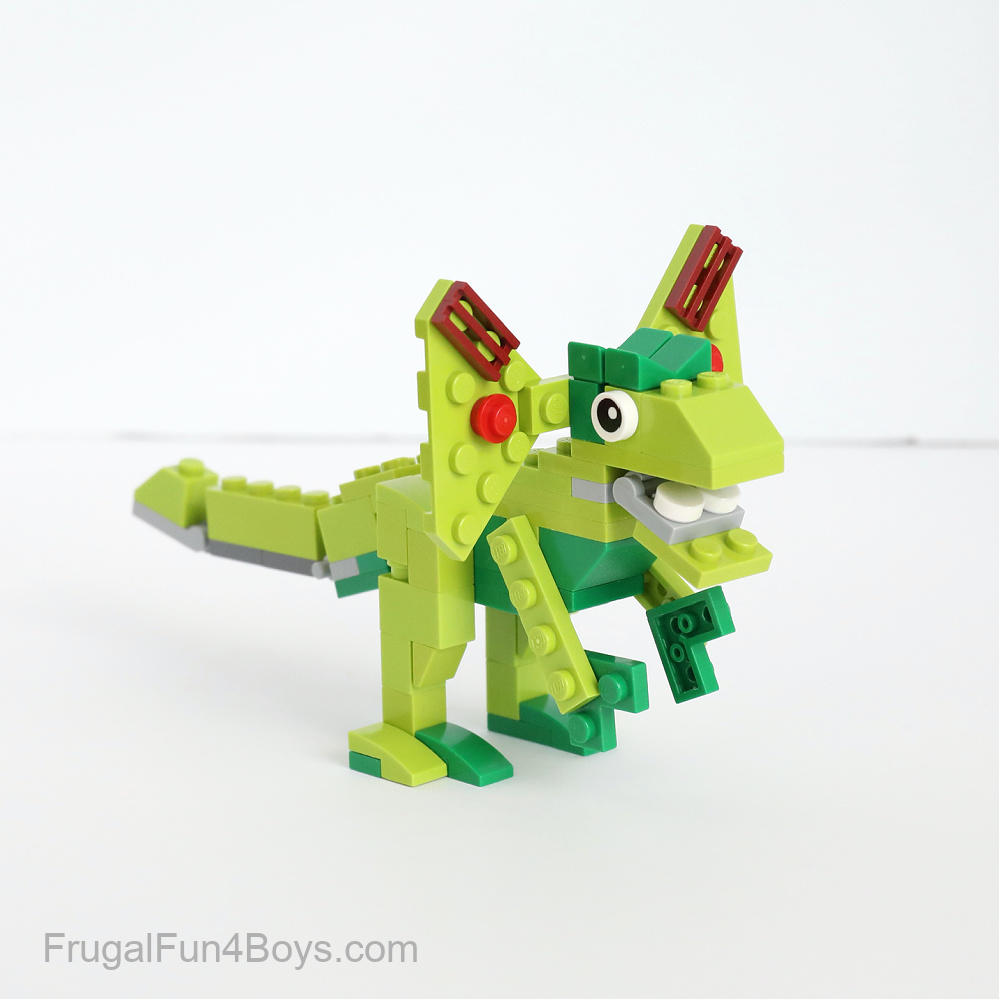 Here’s a view from the side. You can see that there are multiple joints in the tail made from plates with clips and handles. 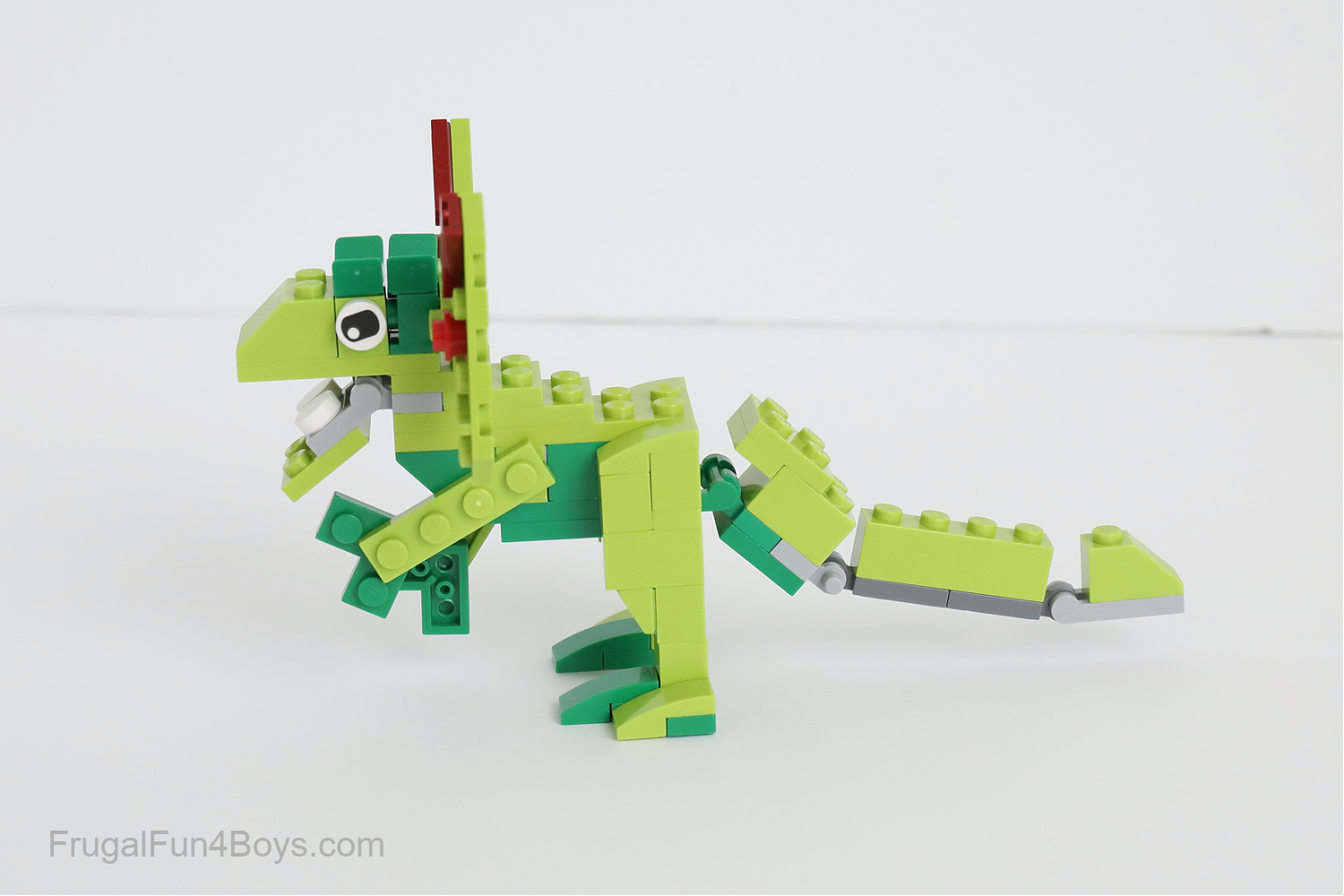 This pteranodon is also featured in our book Epic LEGO Adventures with Bricks You Already Have. See more instructions in that book, as well as a baby version of this cool dino! 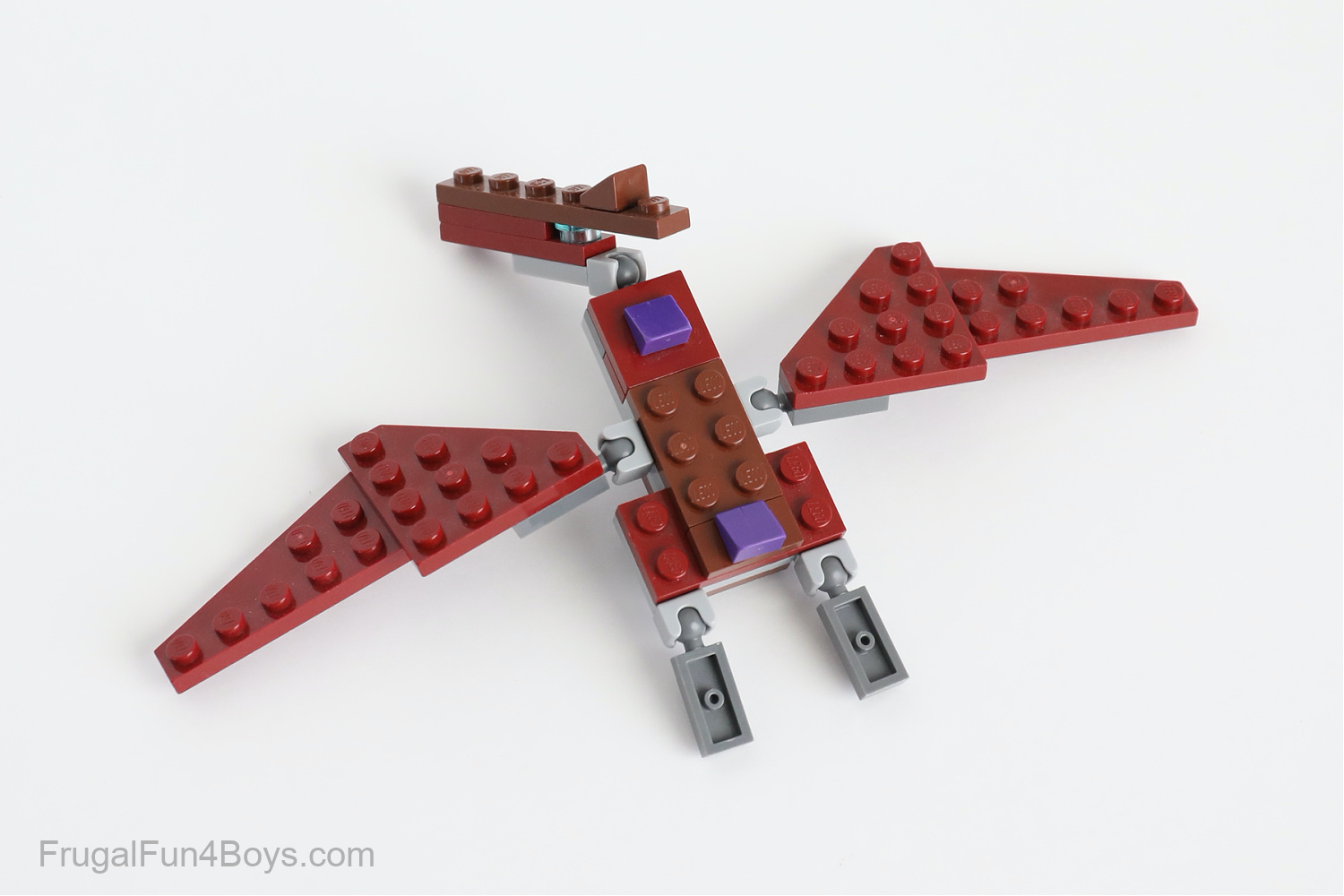 Ball and socket joints make it easy for the pteranodon to stand as well as be in a flying position. 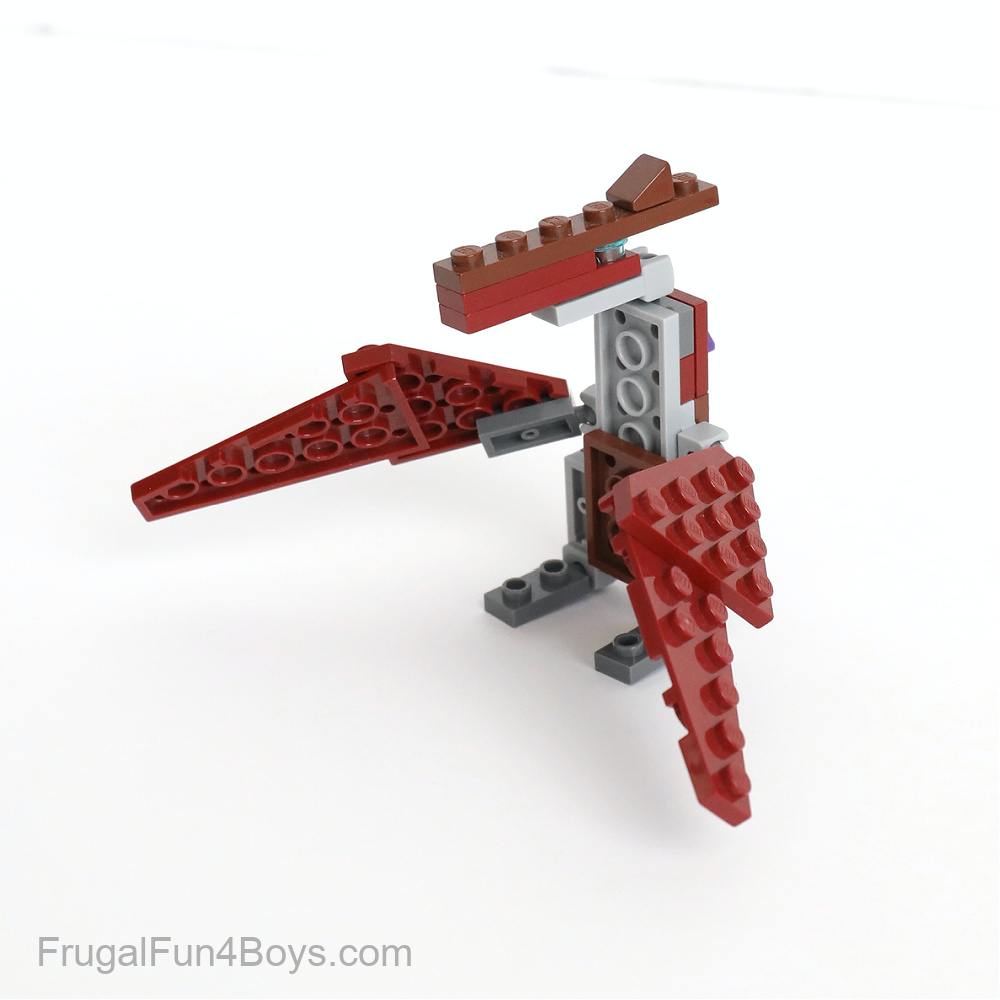 If you liked this LEGO® project, you will want to check out our brand-new book The Big Book of Amazing LEGO Creations with Bricks You Already Have! It more than 75 new building ideas, with instructions.

This book will provide hours of fun! Kids will have a blast using their big tub of random bricks to make new vehicles, animals, robots, spy agents, city scenes, and more. My favorite chapter is the fairytale chapter complete with castles, dragons, trolls, and other storybook projects. Then there is also LEGO art, games, and things to display.

Order now, and your book will arrive on release day! November 2, 2021 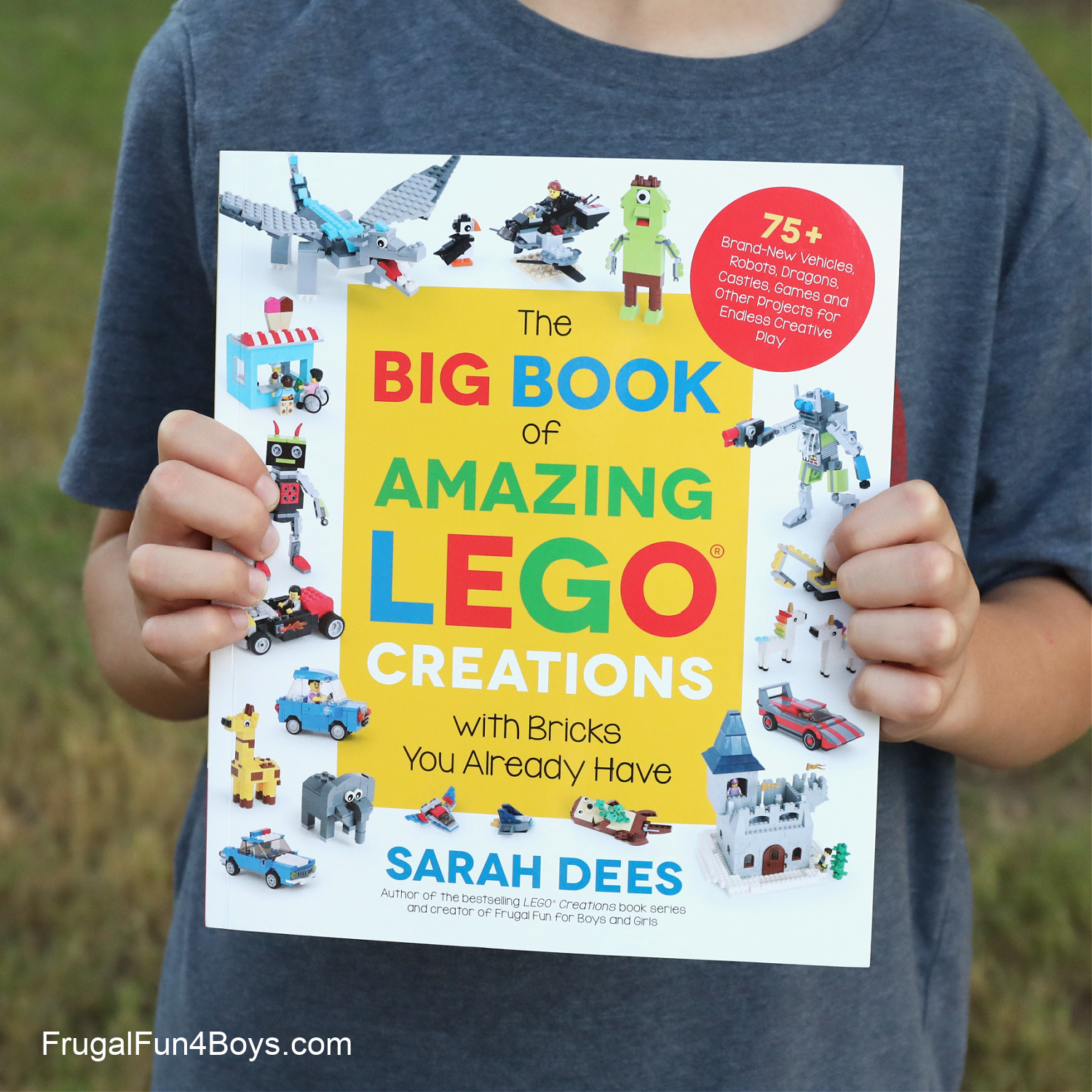 Or you can view all of our LEGO® projects here:  LEGO Projects