The boys got to dress up last night for our church’s annual fall festival, and they had a great time! We usually try to do a more labor-intensive costume every other year or so. Last year, Aidan just wore his cowboy boots and hat and Gresham wore a costume from the year before, so we decided to do something new this year. The fair was on Wednesday, and we thought of our idea on Monday night… nothing like waiting until the last minute! We decided to do toy army guys – like the ones on Toy Story. Aidan called his good friend from church to see if he wanted to dress up as an army guy as well.

I made guns for Aidan, Gresham, and their friend out of cardboard. I glued two layers together and painted them with green acrylic paint ($2.47 at Walmart).

Then I made platforms for their feet – so that they would look like toys. 🙂 I used elastic (97 cents at Walmart) to hold their shoes on. I attached it with tacky glue, but then also reinforced it by sewing it on (through the corrugated cardboard – this was the hardest part of the costume, but they still haven’t come apart even after playing with them again today!). 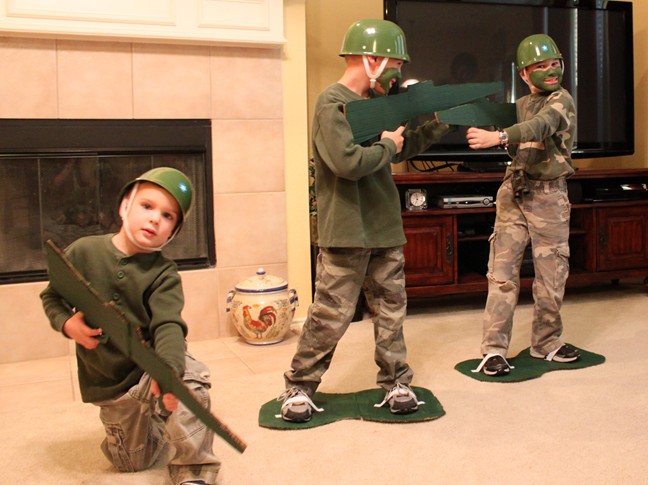 The boys wore camo pants (which we already had) and green shirts ($8 each at Walmart). Our friends gave us some of their green facepaint, and they gave us the awesome army guy helmets ($6 at Party City). The finished look was perfect! They had a blast, and people were able to tell that they were the Toy Story guys! 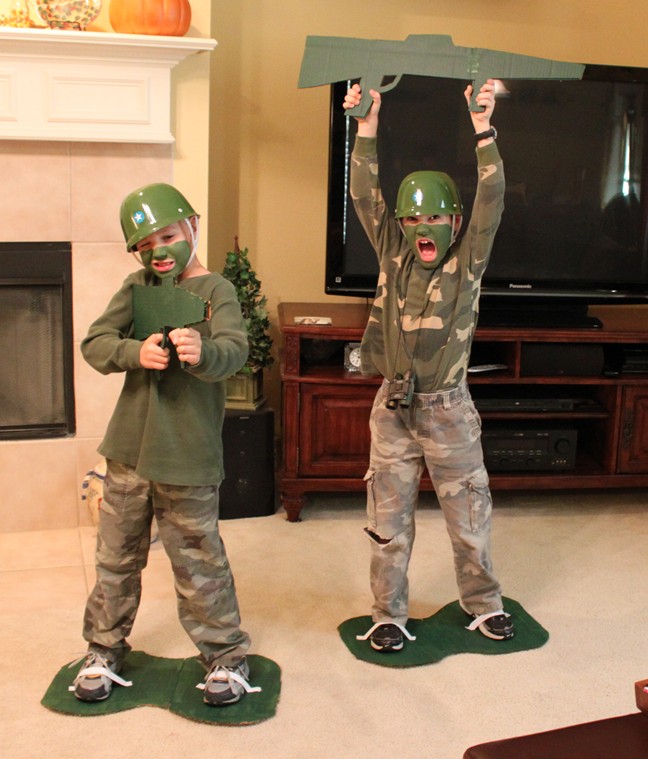 This costume was about $15 per child, with part of that being for green shirts that we will now wear regularly. Not bad, and considering that the boys played in them ALL DAY today, I’d say it was worth the investment!

**The platforms for their feet were mainly worn for the pictures, but Aidan wore his around the church gym (smooth floor) a little bit. Today, he really mastered how to jump and scoot with it on, and had a lot of fun!