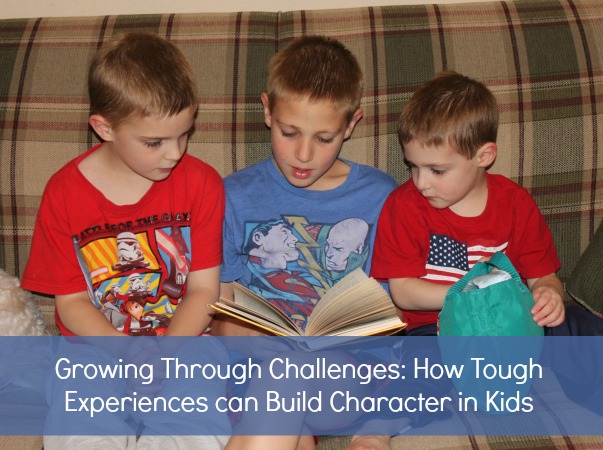 I’ve mentioned before that the past few months have been a difficult time for our family because of my husband having to work two jobs for a while during a job transition. Having him gone so much has caused me to reconsider what’s truly important when it comes to homeschooling. The boys have also been affected. Not only do they miss having Dad around as much, but they’ve also had to do extra work to help me with the house and with Jonathan (age 1).

However, we have seen during this time that God is good, that what He does is good, and that He is working for good in our lives to make us more like Him even though that may not mean the easiest circumstances for us or what we might feel like is the most convenient. I’ve also had to make a choice to keep in mind that my children’s lives are not being compromised in the process either. In fact, this time of trial is God’s best for them as well!

In the past month, I’ve been given several glimpses into how God is using our circumstances for good in my oldest son’s life (he is 9). Let me tell you about my two favorites…

Pitching in with additional work

One evening in early January, I was completely worn out. I can’t even remember now what messes I had already cleaned up and what tasks I had already dealt with, but it was 8:30 p.m. and I had just come downstairs to make Jonathan’s bedtime bottle after giving baths to the younger two. I heard the dog barking frantically at the back door and realized that I had accidentally left him out back while the boys were in the bath. I let him in, and made the bottle. Gresham started yelling from upstairs, “Mom! Either Jonathan or Owen throw-upped on the floor! Or maybe it was Tucker! Oh, here’s some more!” Well, Tucker had gotten into a trash bag that was on the back porch while he was stuck out there, and had eaten part of a dirty diaper, among other things.

So I had a cranky baby who was ready to be put to bed, a trash mess all over the back porch, and dog throw-up in multiple spots upstairs, including on the couch. I knew that I couldn’t let the dog out back again until the trash was picked up, and the carpet obviously had to be dealt with! It was cold and dark and I didn’t want to ask Aidan to go out and clean up the trash, but there was no way I could ask Jordan to do it when he got home from work at 11:00 p.m., and I was so exhausted and still had carpets to clean and boys to put to bed! Well, Aidan was great. He put on a coat and a cleaning glove and re-bagged all the trash. Then he took it to the outside can where the dog could not get it. Then, he came in and asked me what else he could do to help – did I want him to read to Gresham and Owen so I could get Jonathan to bed? I was so proud of him.

My second favorite glimpse came this week. I am a private violin teacher, although I don’t have very many students at the moment! Well this year, I ended up taking an extended Christmas break. I told Aidan that it would be good if I could go back to teaching because we needed the money, but that now that Jonathan is walking (and not napping) during the lessons, I needed his help. One of the families that come for lessons have three boys who are 7, 6, and 3. Then there’s my boys who are 9, 6, 3, and 1 – things can get pretty wild! I told Aidan that if he would help occupy the younger boys while the mother of the students and I were in the lesson with her older boys, that I would pay him $5. We are only one room away, so it’s not really babysitting, but if he could cut down on interruptions to the lesson, it would be great!

Aidan has helped with the kids for a couple weeks now, and this past Monday, he even prepared activities! I gave him a couple of ideas, and he chose to do tape resist alphabet letters. Then, he would hide foam alphabet letters in the living room for the boys to find. 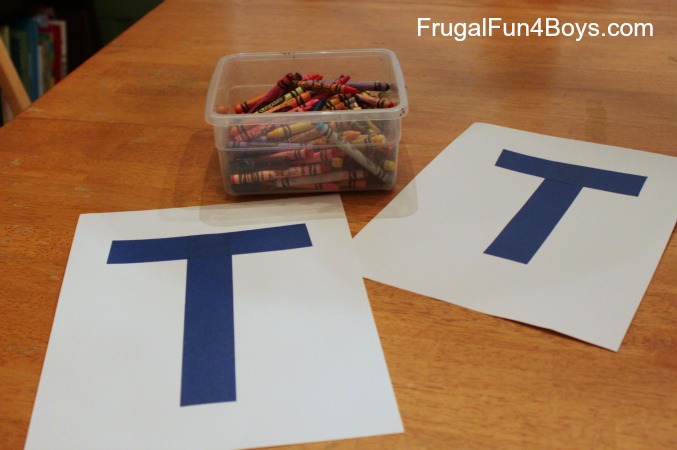 There are so many things that he is learning here! He set up the craft ahead of time by putting tape letters on paper, and he even took some pictures. I talked to him about not pushing the boys (either mine or our guests) if they didn’t want to do the activities – the point of the activities was to have some fun things available, not to create a struggle out of them. We talked about leading the younger ones with kind words, not as a bossy older sibling (leadership skills!). And, Aidan is earning extra money and learning how to plan and save with it.

I’m not saying that everything has gone perfectly… There have been many days with lost tempers, whiny and selfish children, and people (including mom – ugh) who only want their way. But through God’s grace, He is working in our family in ways that would not be happening if our lives were easy. Progress is being made.

If your life is not going according to plan, be encouraged that God may very well use something difficult in your child’s life to develop his or her character and turn their heart toward Him!