Here’s a collection of fun, engaging, and hands-on math games to play with LEGO® DUPLO bricks! These games are perfect for preschoolers and kindergartners. You don’t need a ton of bricks to play these games, or a bunch of special materials. Just grab a dice, some paper, and a marker or two, and you’ll be ready to play!

By the way, any of the games in this post will work just fine with regular LEGO® bricks instead of DUPLO. 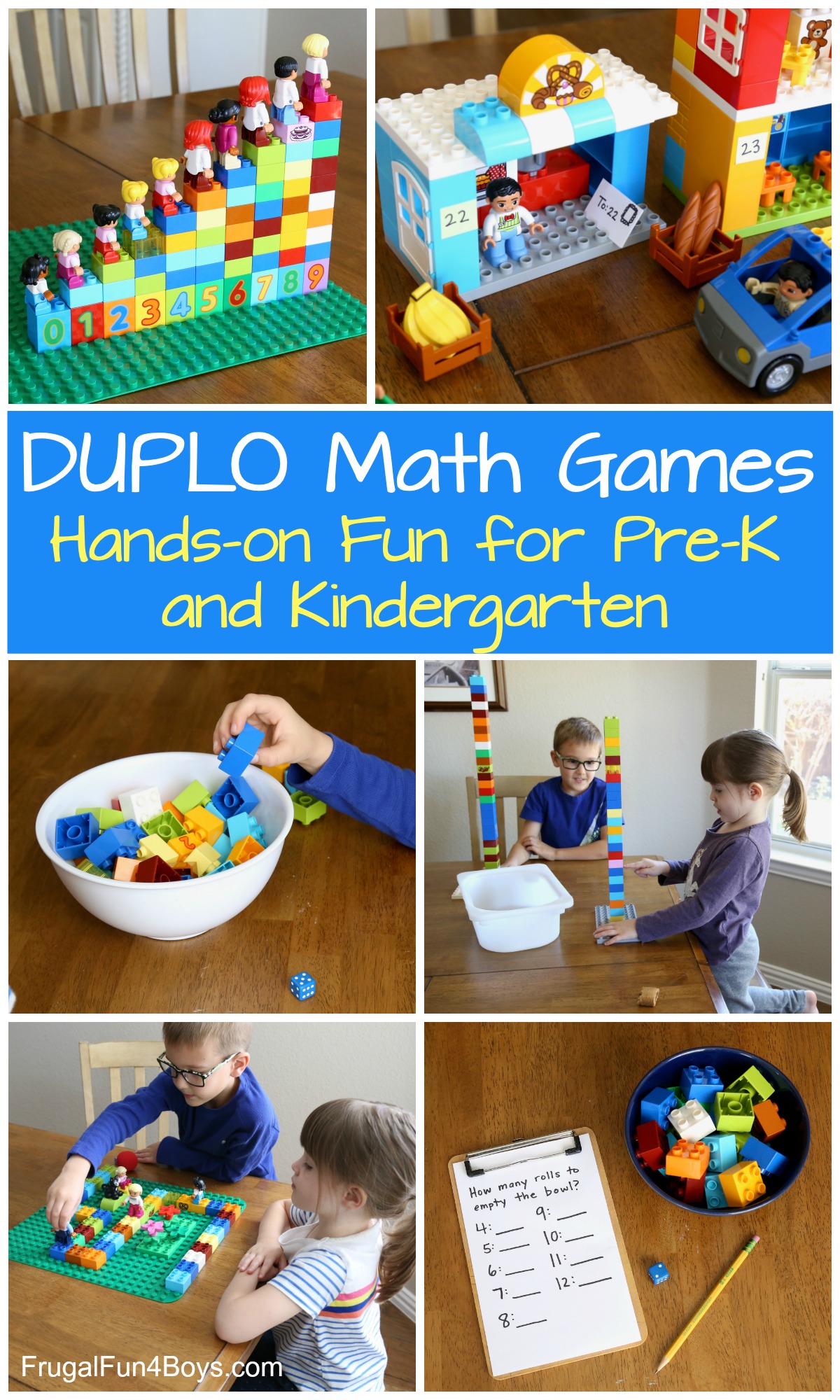 For this post, we used the Duplo My Town Family House, the Duplo Town Square, and the Duplo My First Number Train. (But we did not use EVERY brick in these sets! It doesn’t take that many!)

It’s always great to have a basic brick set as well, such as the Duplo Creative Play Tub or the Duplo My First Bricks.

There are two ways to play this game. Build addition towers or take away (subtraction) towers!

Addition – Roll the dice, and then add that many bricks to your tower. I set out a small tub with 2 x 2 bricks and two plates (flat bricks) to use as bases. We played the game until we ran out of bricks. The person with the tallest tower wins! 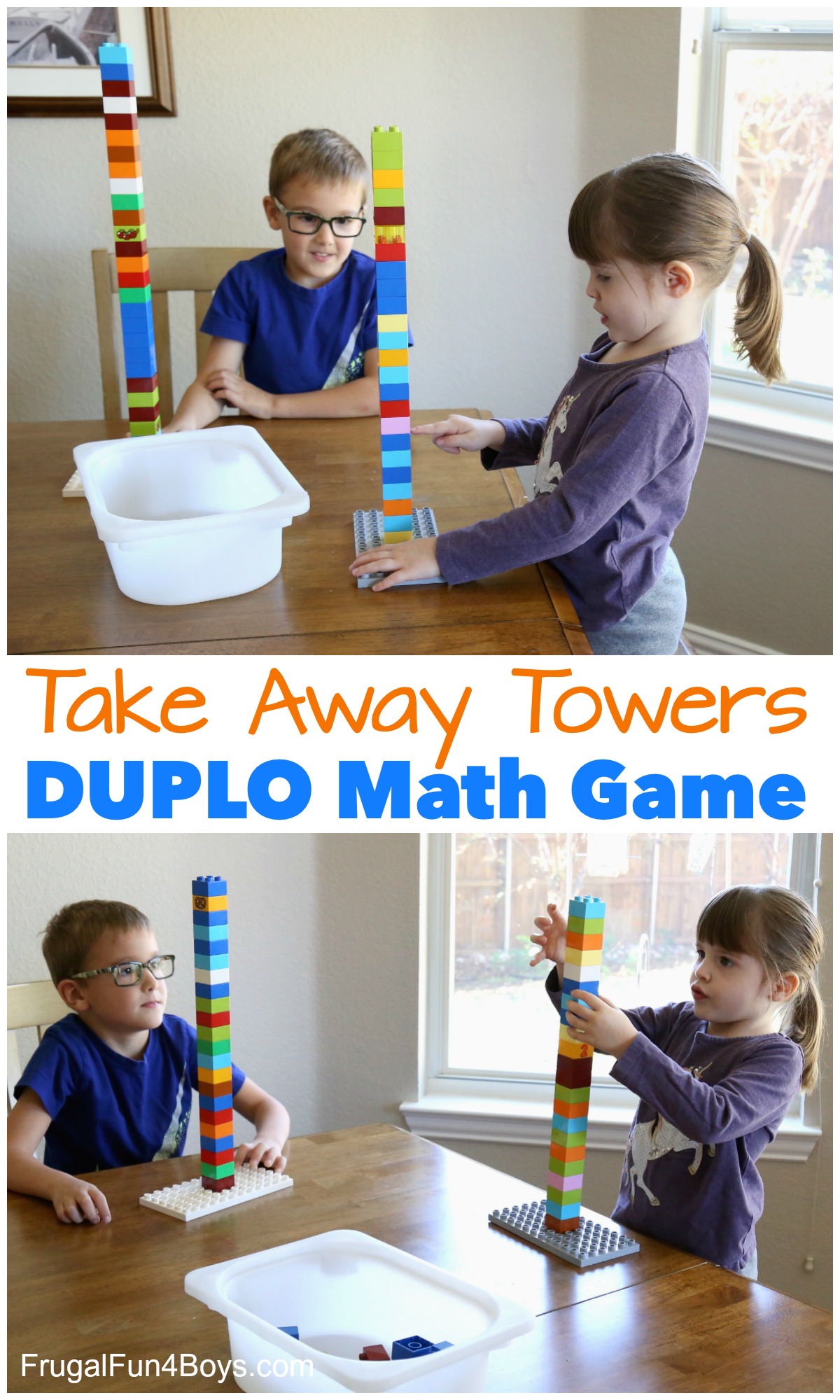 This one is my FAVORITE! Use this game to teach number recognition, or numbers in a sequence. Plus, it’s just fun for pretend play and fine motor skills.

This video shows how it works: 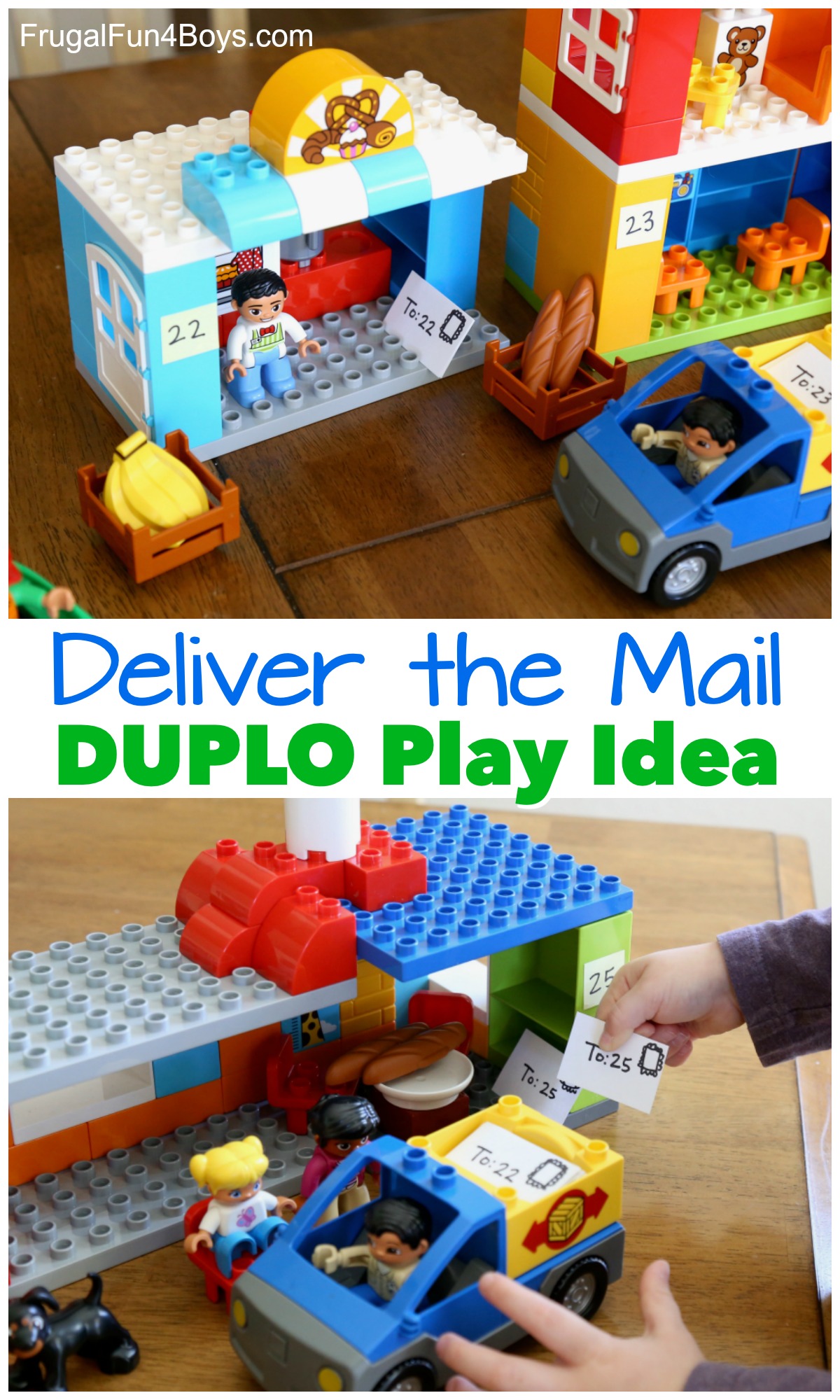 The idea is simple – construct a DUPLO neighborhood with houses and buildings. Then give each one a house number. I used post-it notes to create the house numbers.

Then I created “letters” to mail by cutting index cards into small rectangles. I addressed the letters to each of the house numbers that we had created – 22, 23, 24, and 25. 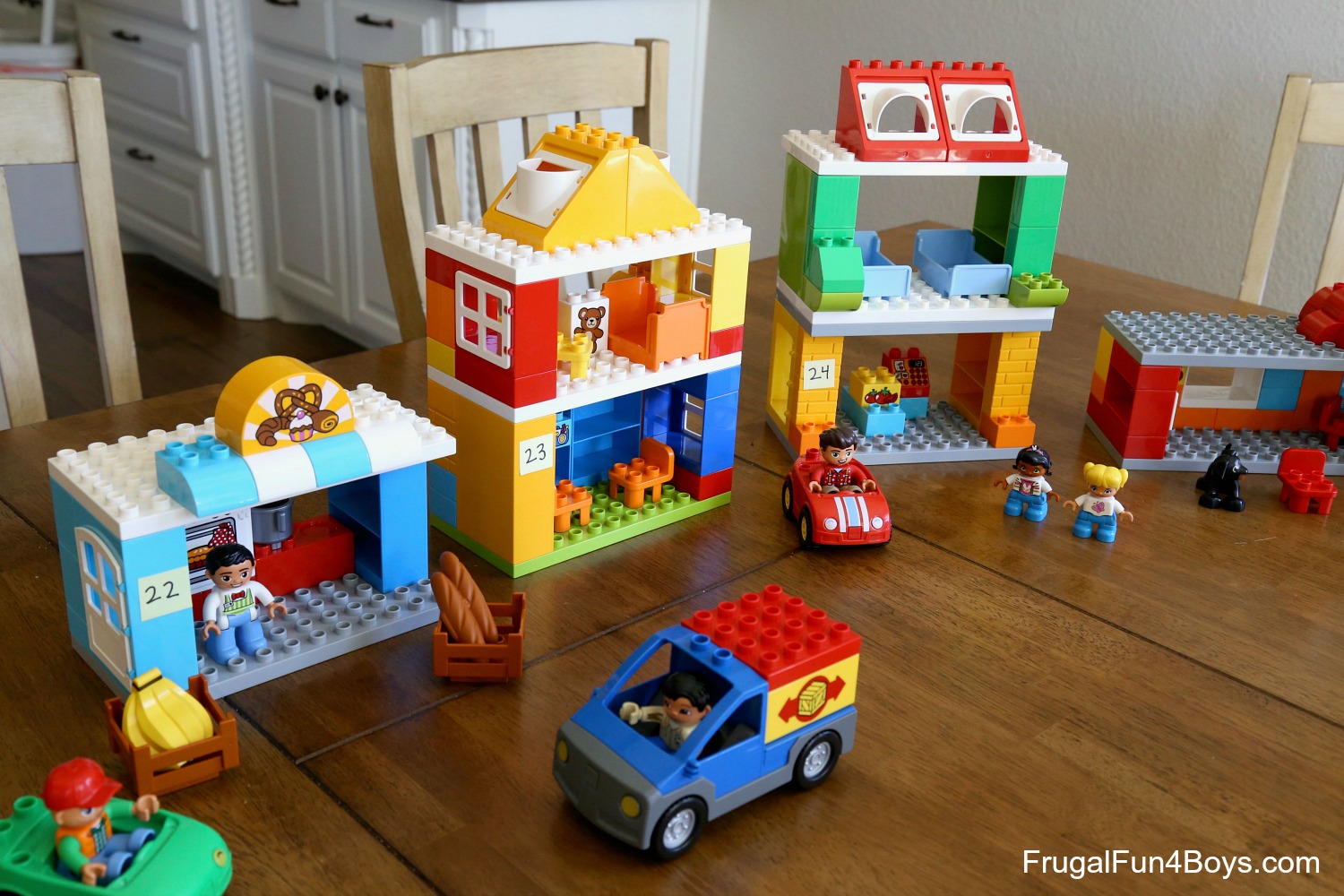 Preschoolers will have so much fun organizing the letters, loading up the truck, and delivering the mail to each house. 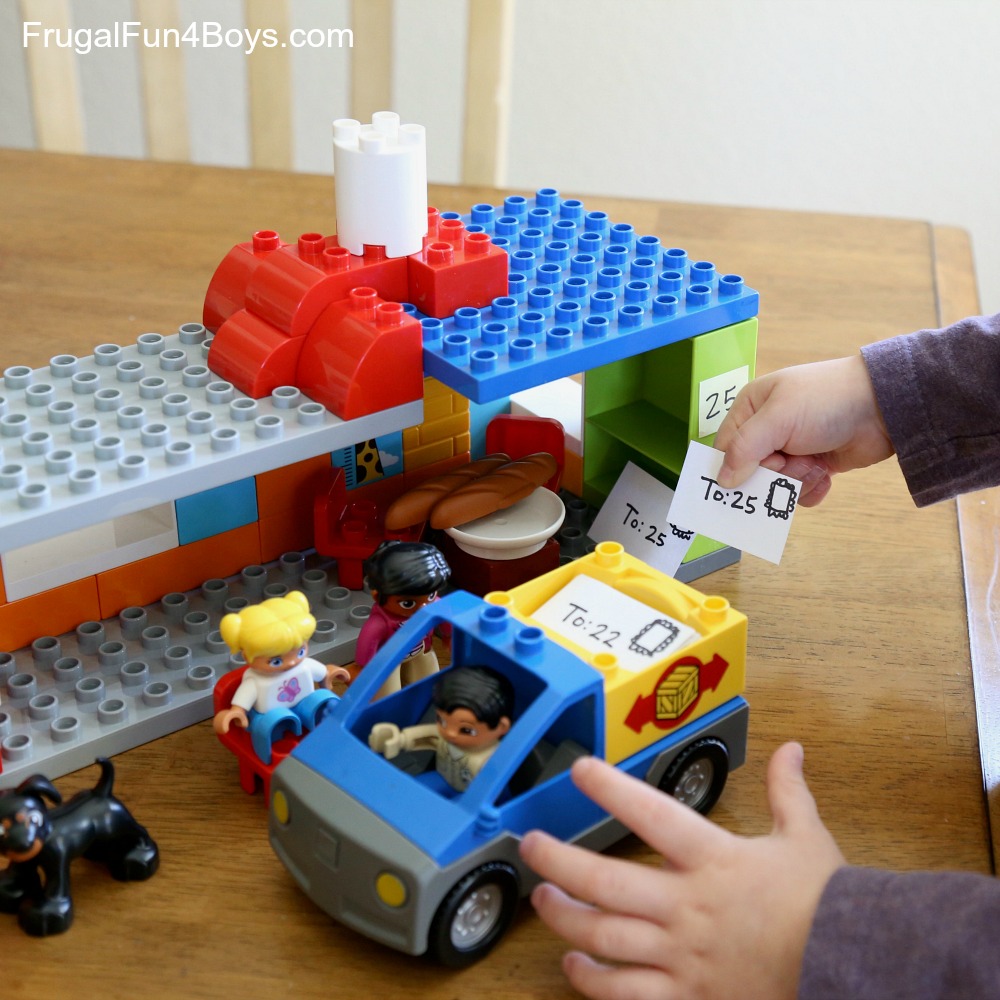 After we had been playing awhile, Owen built a mailbox so that Janie could pretend the LEGO people were mailing letters for the mail man to come and collect.

Grab some play dough and use DUPLO bricks as stamps! I used index cards to create some quick number cards for Janie and Jonathan. Then I grabbed some DUPLO bricks with 2, 4, and 8 dots. I also threw in a flower since you can use the top of it to stamp just one dot. 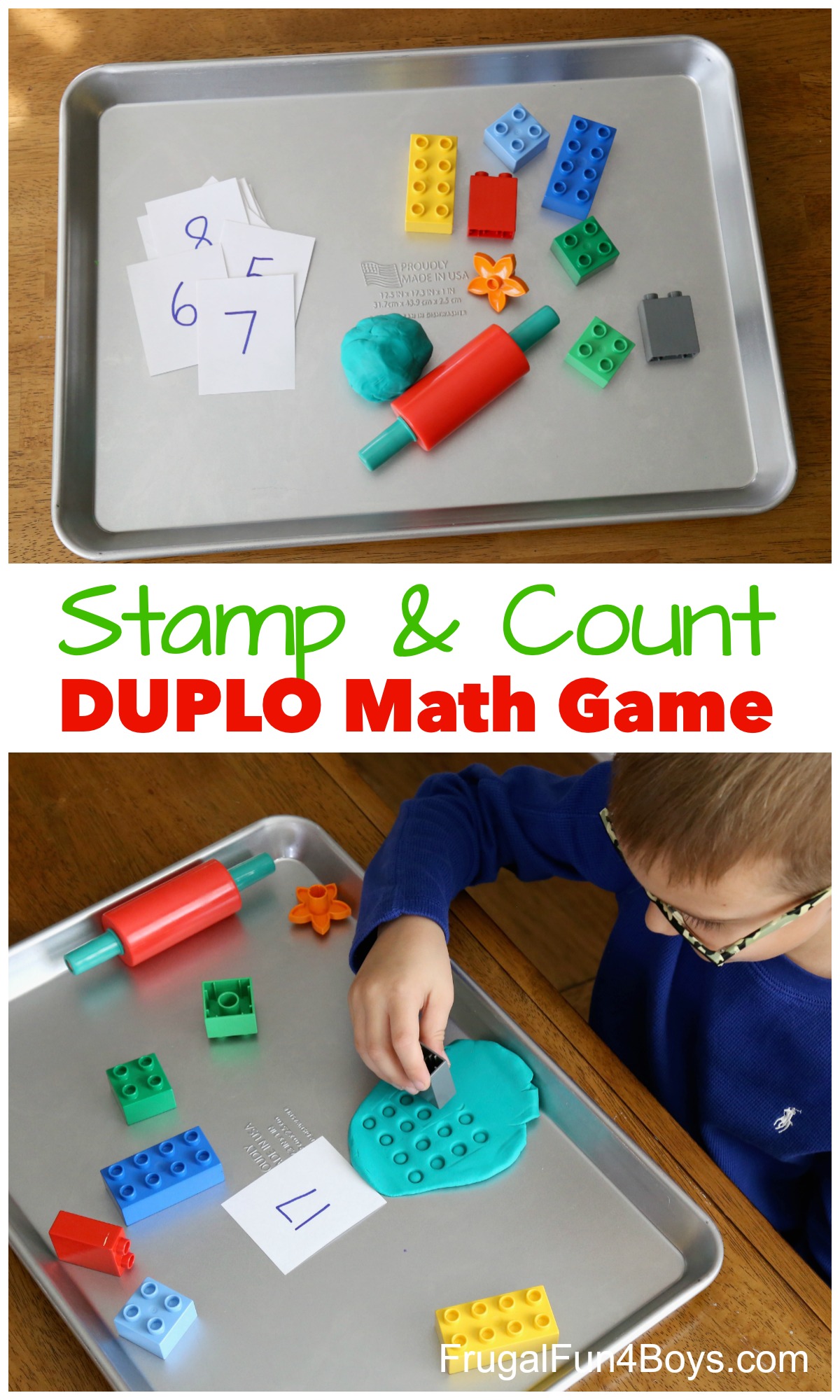 For Janie (age 4), stamping the numbers 1-10 was enough of a challenge, although she’ll probably be ready to go on to larger numbers the next time we do this. Jonathan is 6, so I made him start right in with the numbers 10+. Stamping the right number of dots requires a little thinking! If I want to stamp 17, and I’ve stamped 8 so far, what should I do next?

This activity requires kids to break a number down into smaller numbers that add up to the number they are trying to stamp. Great for improving number sense! 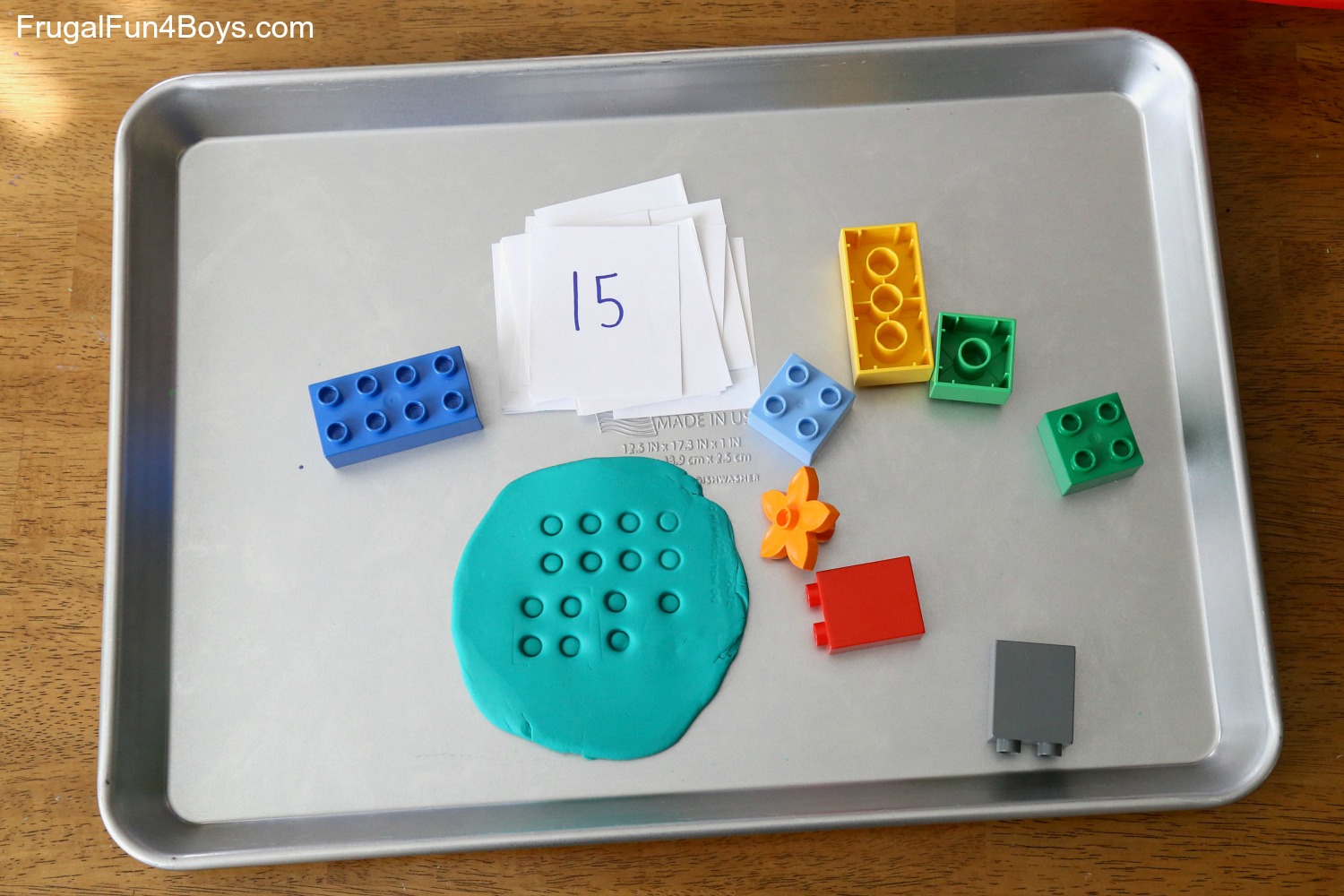 This game was inspired by About Teaching Mathematics by Marilyn Burns. We used this book in our math methods class in college, and I saved it instead of selling it back to the bookstore. The book has so many fabulous math activities for kids, as well as instruction on how to teach math. 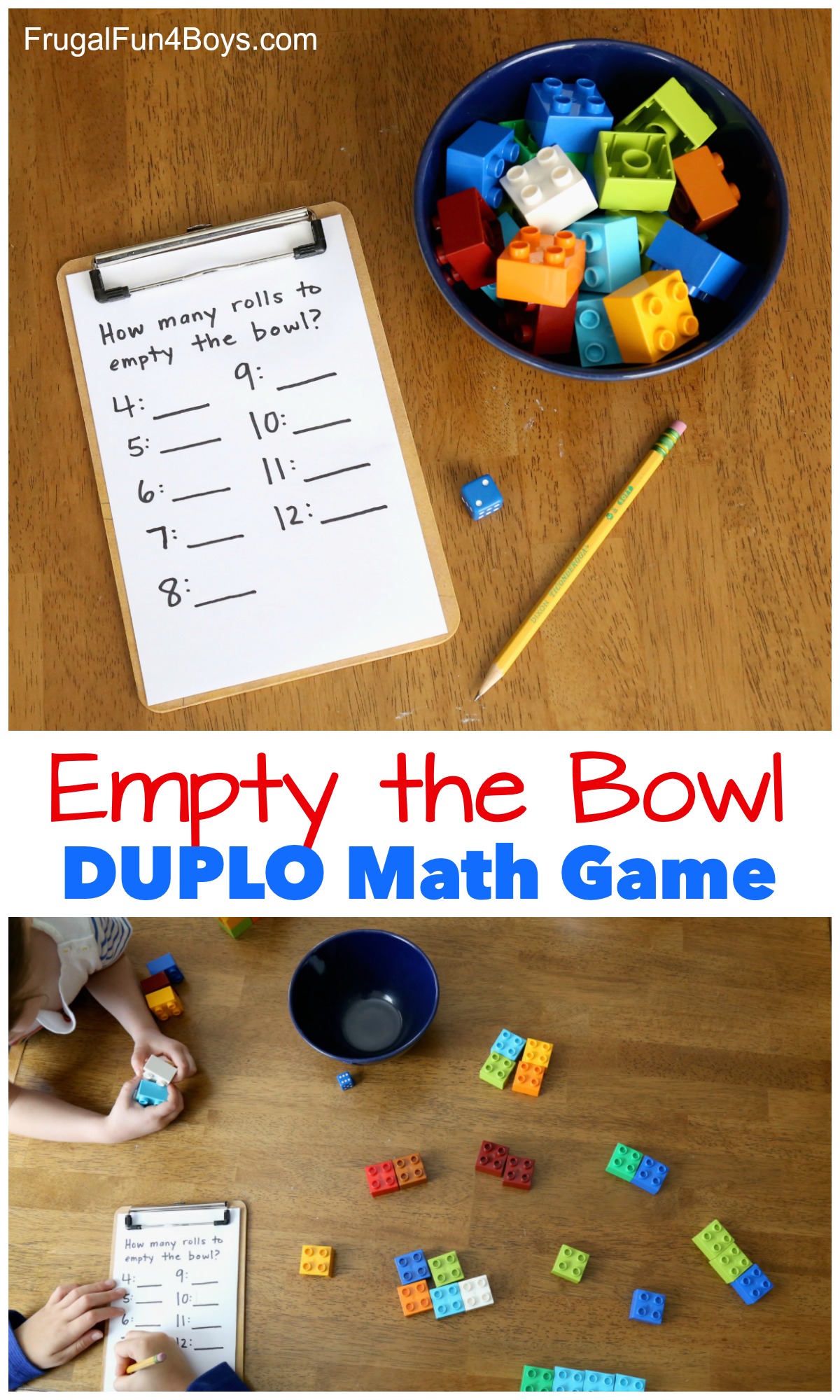 Play a simple version of this game with preschoolers, but for older kids (first grade and up), it can turn into an opportunity to learn about probability! More on that in a minute! First, the simple way. Simply fill a bowl with DUPLO bricks. 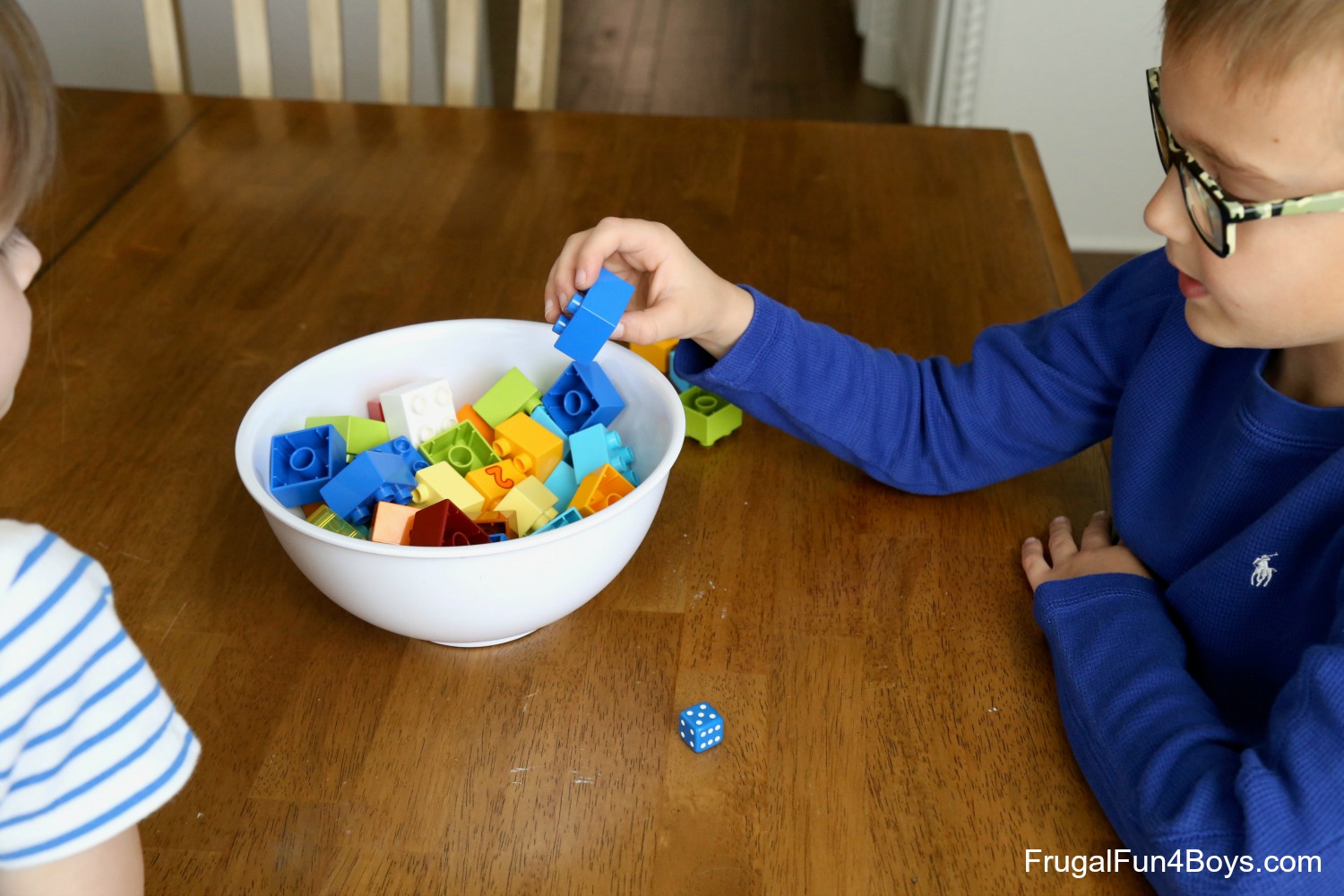 Each player rolls the dice and takes that many bricks out of the bowl. The game ends when the bowl is empty! 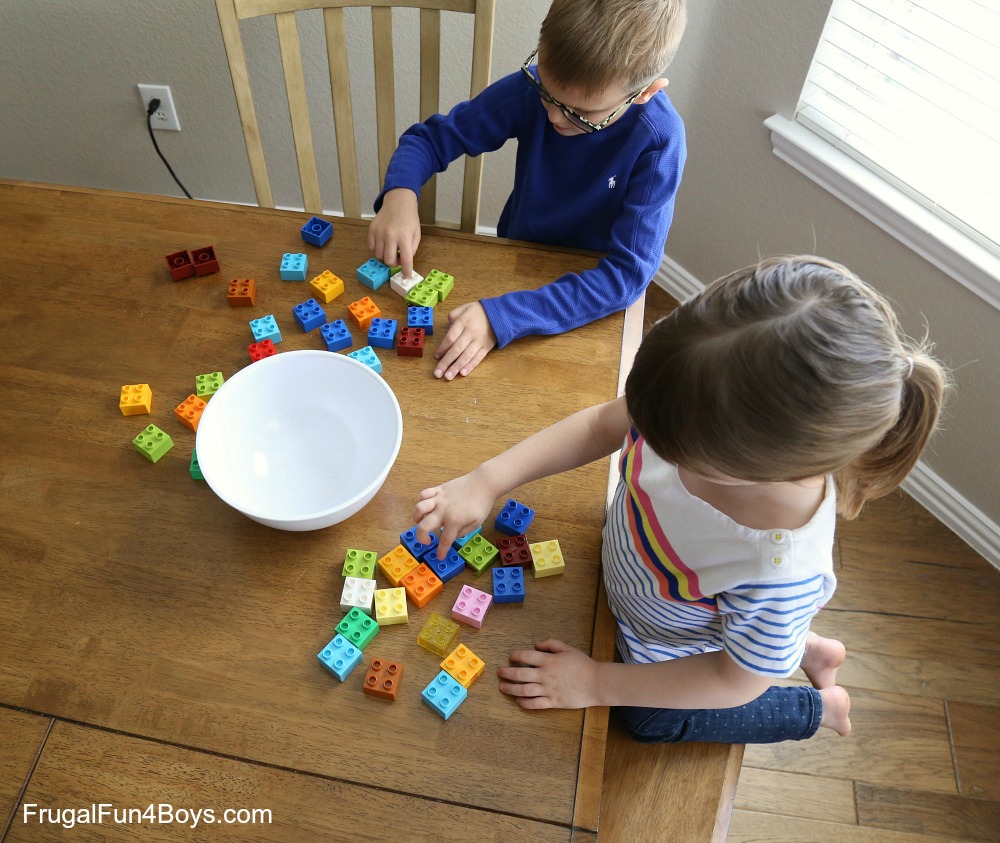 Make the game even more fun by graphing how many rolls it takes to empty the bowl!

For this game, I used a smaller bowl and 24 bricks. I asked Jonathan, “What is the least number of rolls that it could possibly take to empty the bowl?”

He wasn’t sure. I asked him if we could empty it in two. If we managed to roll a 6 and then another 6, would that empty the bowl? No, it wouldn’t. Older kids will be able to figure out on their own that the least possible number of rolls is 4, but Jonathan and I worked together to make this graph. The greatest possible number of rolls is 24, but that would be HIGHLY unlikely. However, if you played this game enough times, it could happen! For our purposes, I listed the numbers of rolls that would be most likely, but with enough on the upper end to show the limit of what is likely to happen.

Every time we played a round of this game, we put a tally mark next to the number of rolls it took to empty the bowl. 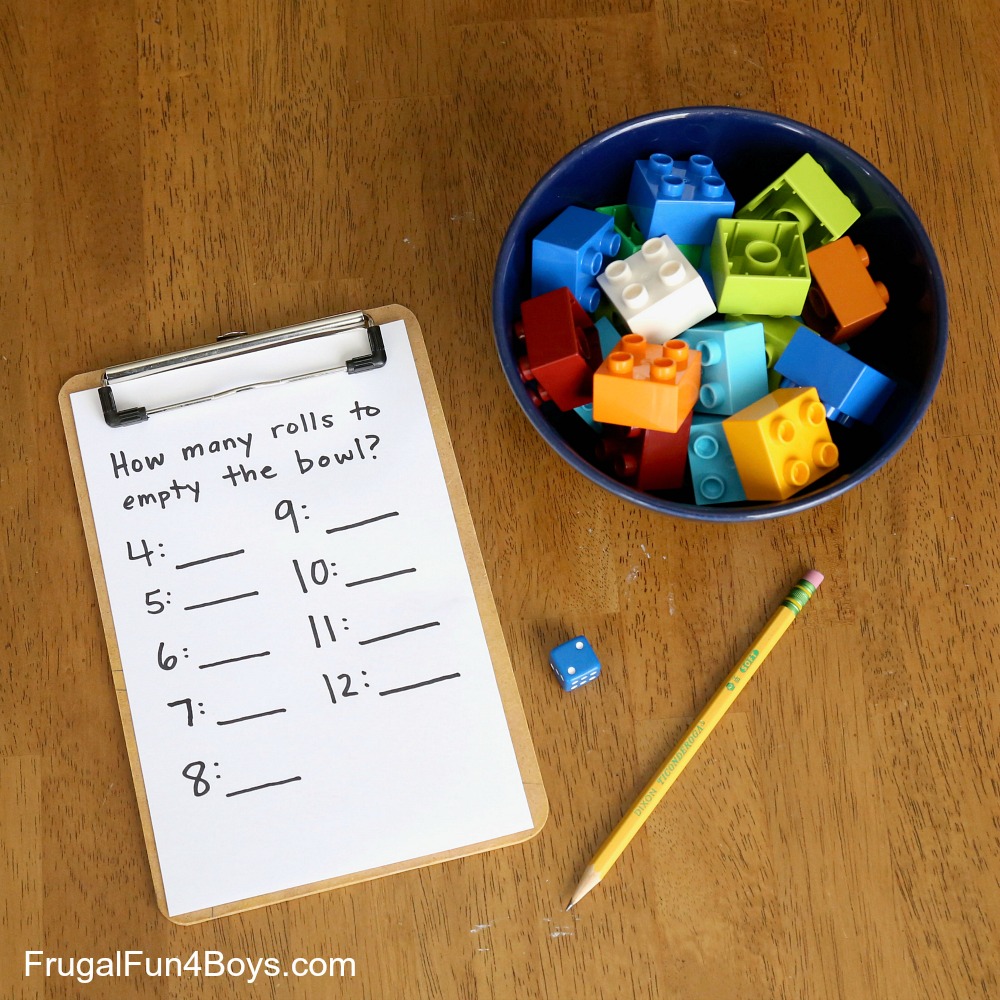 We played this game MANY times over the course of a few days! I’ll post a photo soon of our results. The more times your repeat this activity, the more accurate your graph will be.

I used the number bricks from our DUPLO Number Train to set up a quick counting game for Janie. 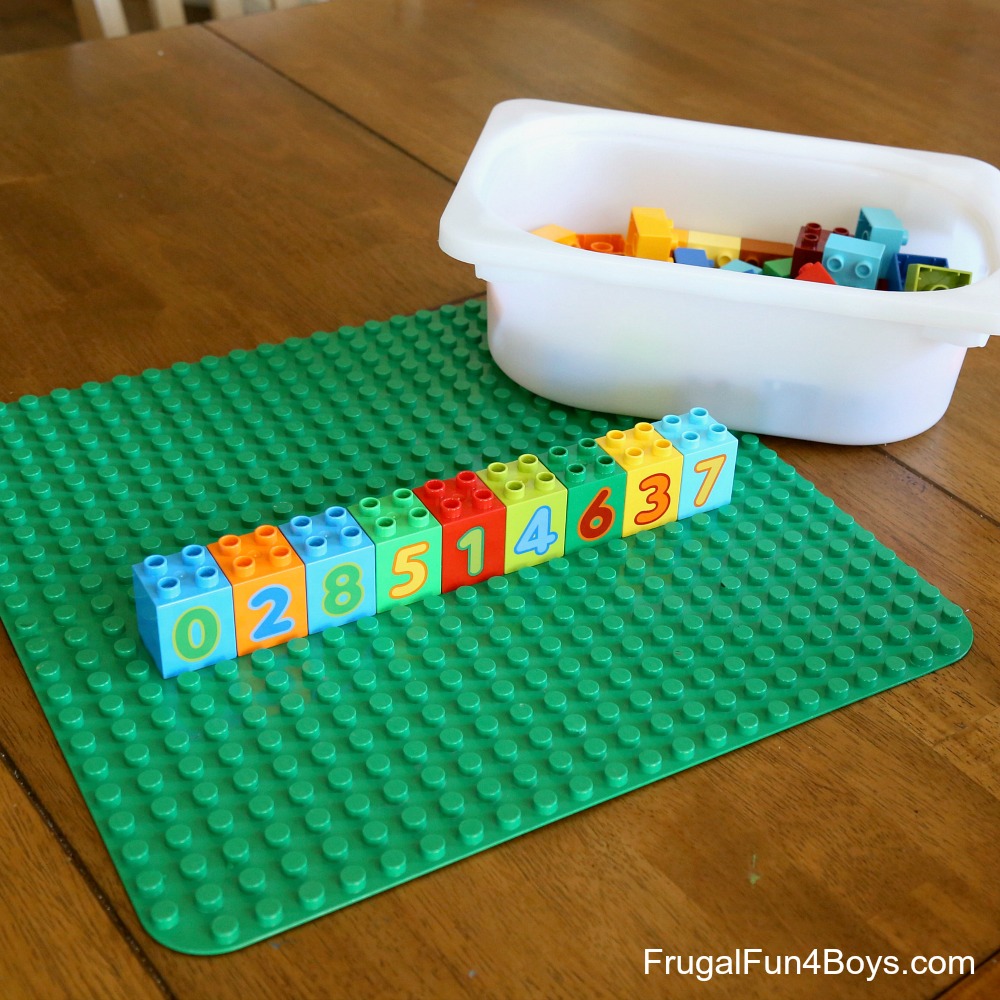 She built towers that matched the number on each brick. 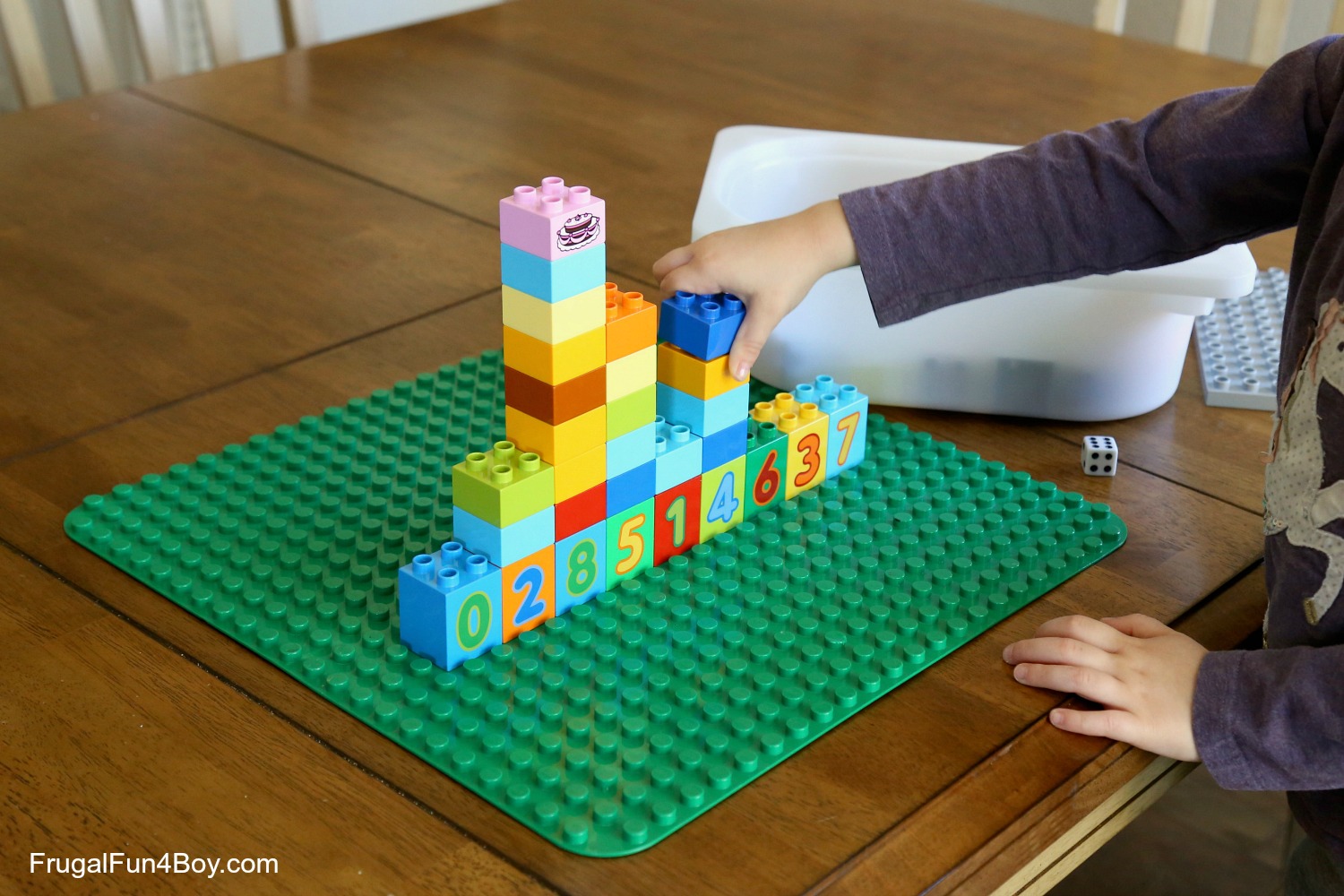 When the towers were complete, I carefully took them off the baseplate and then had her line them up least to greatest. In true Janie fashion, she had to add a DUPLO person on top of each tower. She pretended that they were climbing up the stairs! 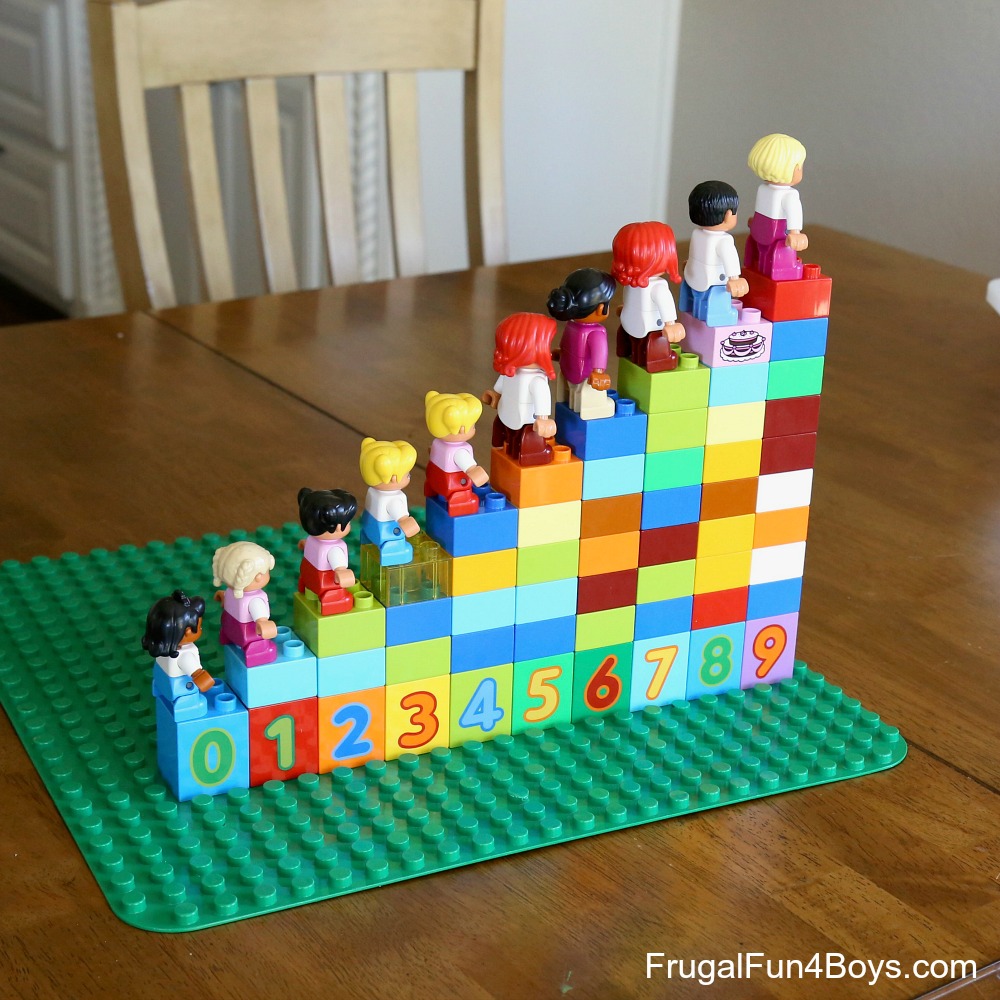 Game #6: Build your own Board Game

Use 2 x 2 bricks to create a path for a board game on a large base plate. 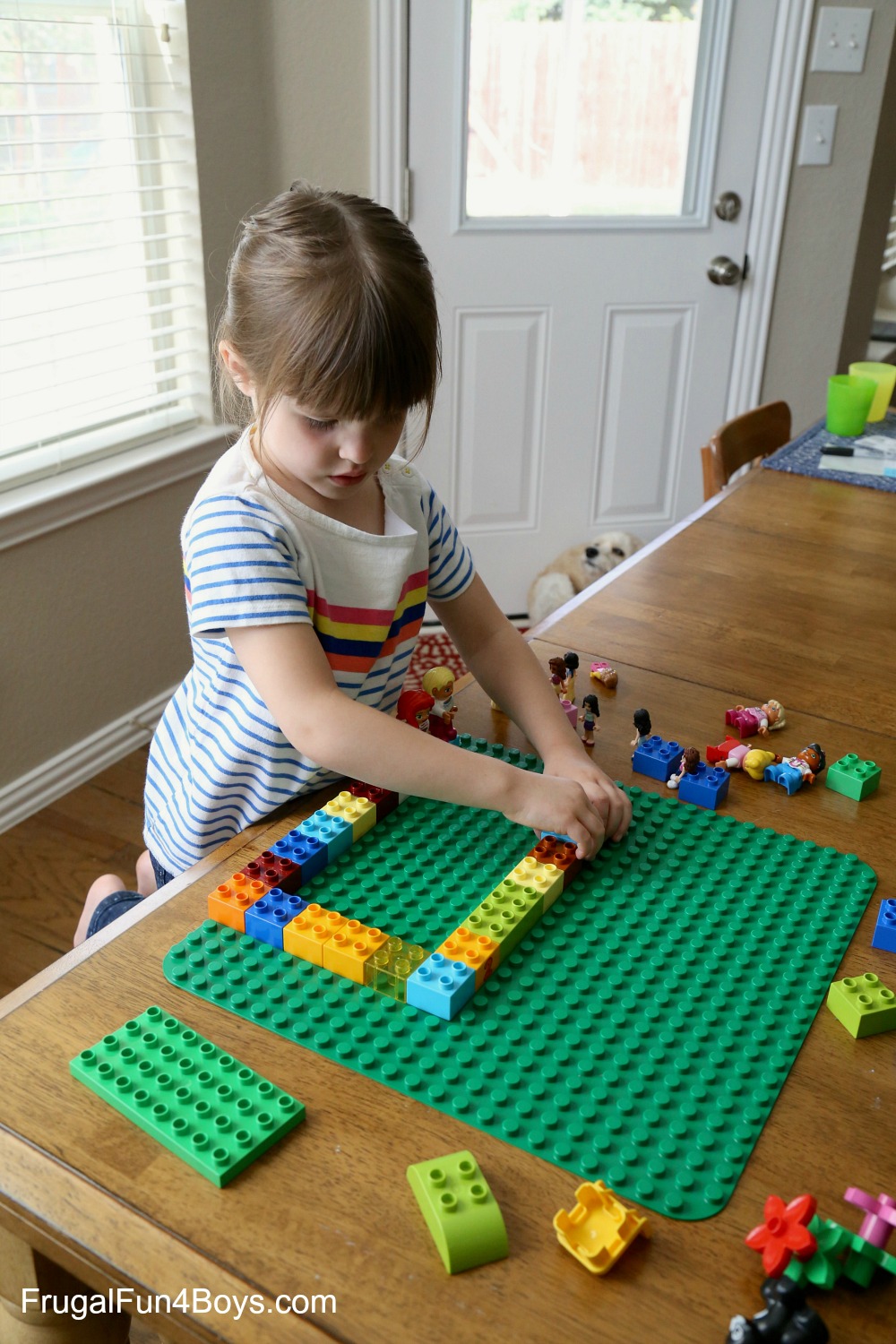 Janie built a nice path for her game! She loves stuff like this. 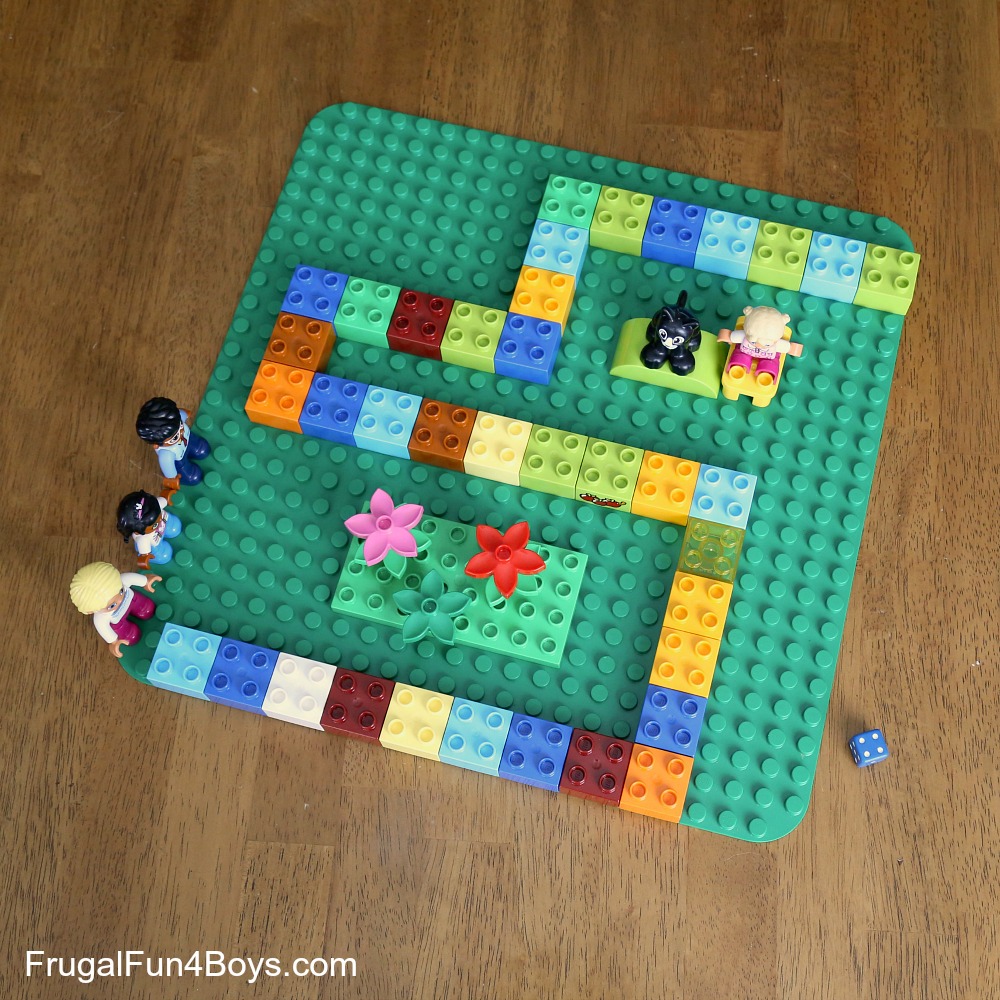 To play the game, just roll the dice and then move your person that many spaces! Easy peasy! Older preschoolers and kindergartners may want to add shortcuts to the game board or pretend that different colors of brick mean different things. For example, you could play that when you land on green, you get to go ahead two more spaces. 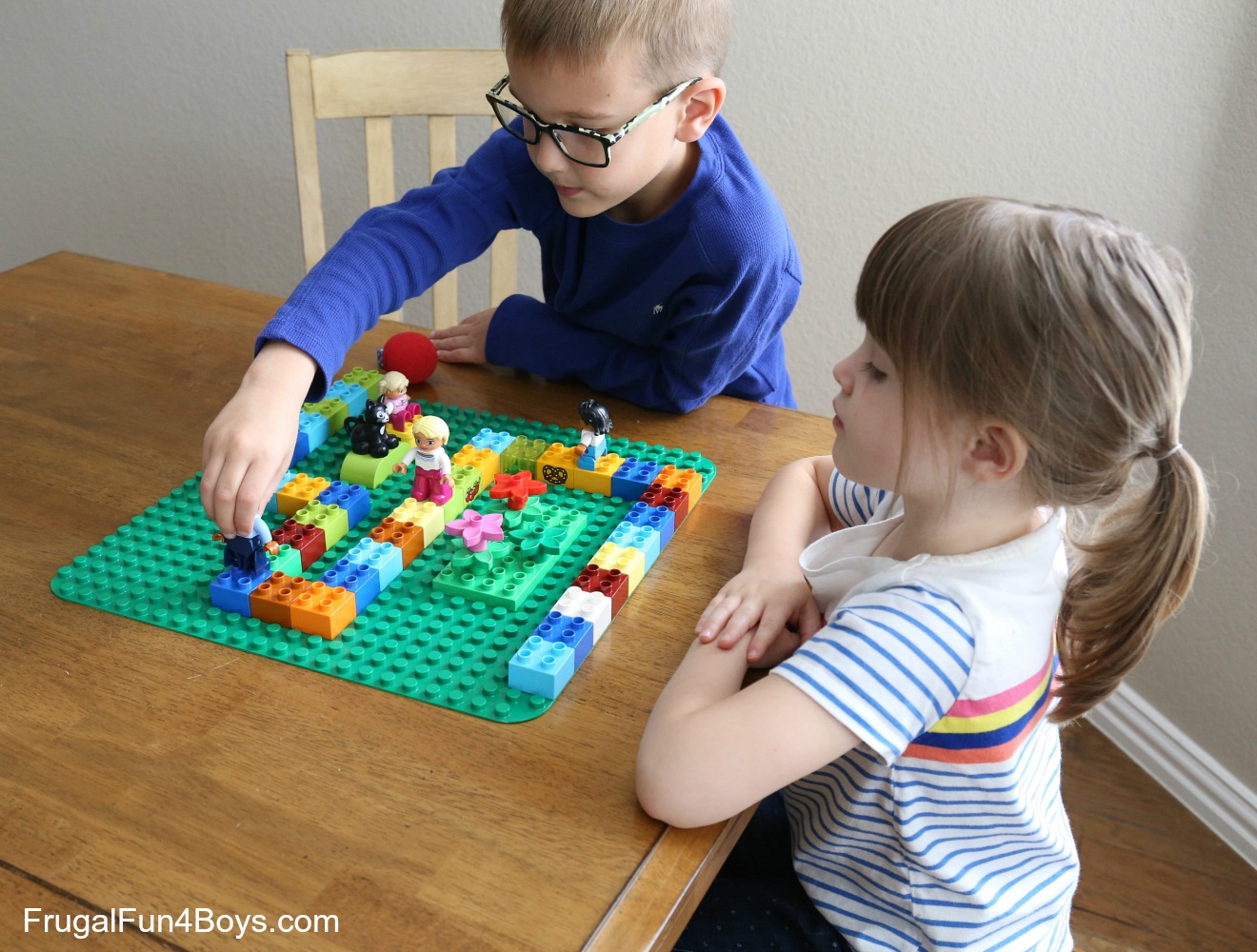