In our homeschooling, I really want our kids to have a love of learning. But sometimes, the mess gets in the way!

It all started on a Sunday afternoon two weeks ago.

The boys went to Grandma and Grandpa’s house after church so that they could go see a new model train exhibit that came to town. They arrived home that evening with huge grins on their faces and a Cool Whip container with a green anole inside. If you’re not familiar with anoles, they are very fast little lizards that are native to the southeast US. They are fun to watch because they can puff our their red throat pouches, and they change from green to brown depending on their surroundings. Gresham has been dying to own a pet bearded dragon, but since they are a bit out of his price range, he has had his eyes set on catching an anole. Who knew the boys could actually catch one? 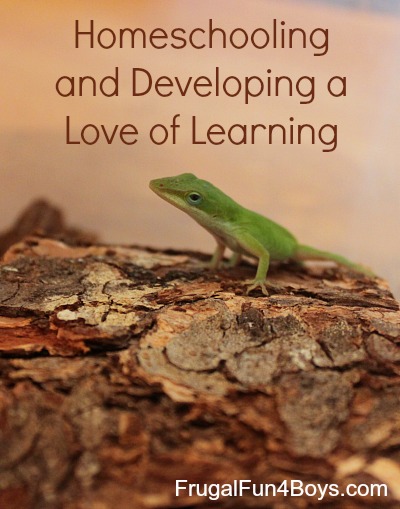 The boys were thrilled with their new “pet.” They immediately started planning out the equipment we would need – an aquarium, a heat lamp, etc. To their dismay, we announced that we did not have any money to put into another pet and that it was probably not going to work out to keep him (we already have a dog and a Russian tortoise). Monday was spent figuring out how to earn the money necessary to buy a lizard habitat.

Some of their ideas:

2. Take their violins to gymnastics and play them and put out a hat for tips (I was pretty sure that wouldn’t be allowed…)

4. Bicycle trick show at 50 cents a ticket. The would do jumps, etc. (Pretty sure the ER bills would outpace the earnings…)

5. Make paracord bracelets to sell, and let people pick out their sizes and colors (Now that sounds like a pretty good idea!)

Well, Tuesday arrived, and the anole was still living in the Cool Whip container, and no one was making any progress on earning any money. I finally told the boys that we were just going to have to let Nolan go (he had a name by this point, which I had actually suggested. I should never have named him – it’s harder to part with something once you name it!). I told them that it was mean to keep him when we didn’t have a proper home for him or food to feed him. So we enjoyed looking at him a little more, and then released him in the backyard.

Immediately, there was very sad sobbing from a 7 year old boy who has dreamed for months of owning his very own pet lizard.

Aidan assured me that if I would just let them use his Lego storage tub as a home for Nolan that we could make air holes in the lid and he would use his own money to replace the tub. And then Gresham could be happy.

After an hour had gone by and Nolan still hadn’t left our porch, I relented. Cold weather was moving in, and I thought his days might be numbered anyway. The boys recaptured him and got to work converting the storage tub into a lizard home. When Daddy got home, he used his drill to make holes in the top of the box, and even drove the boys to the pet store so that Aidan could spend his own money on crickets for Nolan. 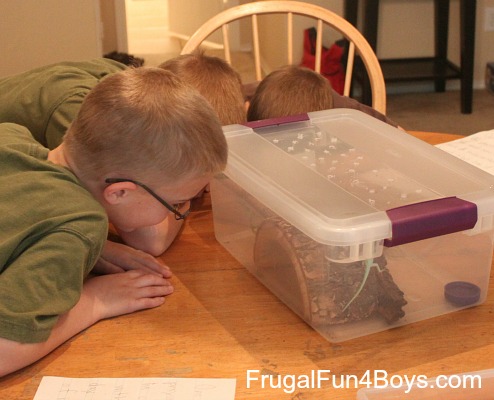 So… “Mantis” came inside to join our menagerie. Thankfully, he eats crickets just like Nolan does.

After a few days, we discovered that Mantis was actually a she!! First, it looked like Mantis was pooping. The boys watched with great interest. Soon, however, they realized that she was actually spinning an egg sac! We looked it up, and sure enough, that’s what it was! 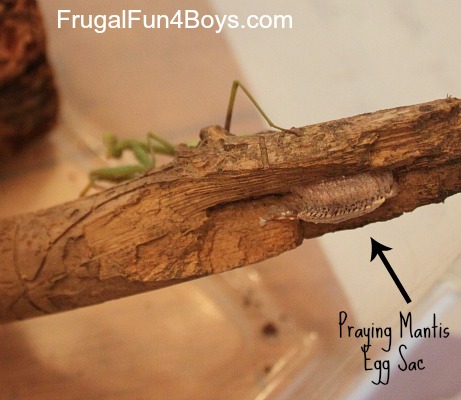 Last Thursday, I announced that our language lesson for the day would involve Nolan and Mantis. Aidan (5th grade) has been learning about outlining in his grammar book. I told him that I wanted him to read about praying mantises on our World Book Encyclopedia CD-ROM and then to make an outline of facts about them. Then, he was to write a report about praying mantises using his outline. Gresham’s assignment (2nd grade) was to write a paragraph about how we found Nolan and Mantis and what we have observed them doing.

The boys were eager to get to work, which is not how our language/grammar time usually goes! 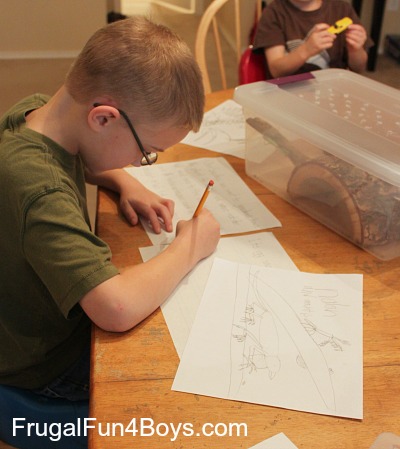 Soon I was hearing things like, “Mom! This is amazing! We could have up to 400 mantises hatching out of that egg sac!”

And, “Mom, how do you spell ‘caught?’ And is this the right place to put a period? Oh, that should have been a capital letter. I’m going to fix it right now!”

And I was reminded that encouraging a love of learning is a major goal of our homeschooling. If kids enjoy learning and know how to discover new information for themselves, this will take them very far. I’ve been feeling bad lately for the amount of interruptions that we’ve had in our homeschooling. And while I’m not recommending giving up on structure altogether, this was a good reminder that it is beneficial to say “yes” to some of the things that the boys want to explore that sound very inconvenient to me!