Aidan has been a growing kid lately! He now officially eats more than me. He would eat all the time if I would let him! Back in the summer, we noticed that his bicycle was getting to be too small, and Gresham’s bike was too small as well, and so we needed to purchase a bigger one and hand his down to Gresham. Well, with the costs of selling our house, moving, new school books for the new school year, etc., a bike was not ever something that we had the money for.

A few days before Thanksgiving, I took Aidan to the local bicycle store to get a new tire for his bike. The man at the store said that he definitely needed a larger bike, and we looked at some options. Aidan’s only criteria was that he wanted the bike to be red! My criteria was durability, and the red one was probably not the best use of money, I thought. I told the man that they looked like great bikes, but that my husband had recently lost his job, and that other things needed our money at the moment. The man said that they usually have some used bikes come in as trades, but that that wouldn’t be until after Christmas, and that at Aidan’s age “Santa is still bringing the gifts, and Santa doesn’t give used bikes.” (We weren’t planning for the bike to be a Christmas gift anyway!)

Aidan and I talked about the bike issue at home with Dad, and we told Aidan that we wanted to get him a bigger bike, but that it was not a possibility at the moment. I think he really understood. I told him that he should pray and ask God to provide a bike if He thought that was best. I’m not sure if he did – I know that I prayed about it, but I never sat down to pray with Aidan. (In hindsight, I really wish we had!)

I talked to a friend who has several children and asked her what they do about the cost of purchasing so many bikes. She said that they have always done well on Craigslist or buying used from friends. Great idea! I don’t know why I hadn’t thought of that before!

I put a note on facebook, and a friend responded that she had a bike belonging to her son that they would be happy to sell us for the bargain price of $25. And it was a red bike! 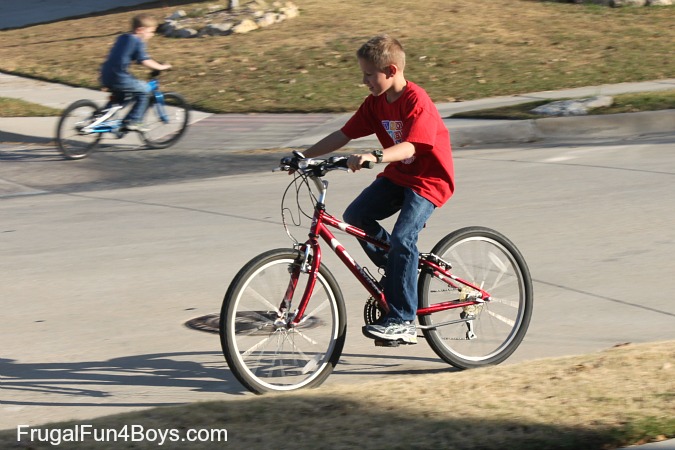 I’m sure that the salesperson at the bike store meant well, but my son will be just fine riding a used bike. In fact, even a new bike will be a used bike after just a few minutes!

Trials are often like a spotlight, shining the attention onto God’s provision instead of on our own abilities.

The trials that come into our lives are not by accident. And the trials that we face (for us, a job transition) and that affect our children are God’s plan for our children and not just God’s plan for us. I don’t wish that we had had the money to just purchase the brand new bike at the bike store for Aidan because then he would not have seen God’s kindness in providing a bike in the color he wanted (and with a headlight and odometer too!).

If you’re feeling the pinch this holiday season, be encouraged! Even if we have an abundance, life does not consist of our possessions (Luke 12:15). Children do not need a huge pile of brand new toys to have a merry Christmas – they need a glimpse of the Savior! Maybe Santa doesn’t bring “used bikes,” but God gives gifts that are perfect!