Toothless (Night Fury) LEGO® Building Instructions, Inspired by How to Train Your Dragon

How to Train Your Dragon 2 came out on Netflix this month, which inspired a new round of dragon mania in my house!

This LEGO® Toothless was an especially fun project because almost every member of our family had a part in building it. Toothless is definitely a challenging character to build! Dad was the one who finally came up with a good shape for the head, Aidan gave him posable wings, and Gresham created the posable tail. I built the body and legs. So it was truly a family effort! 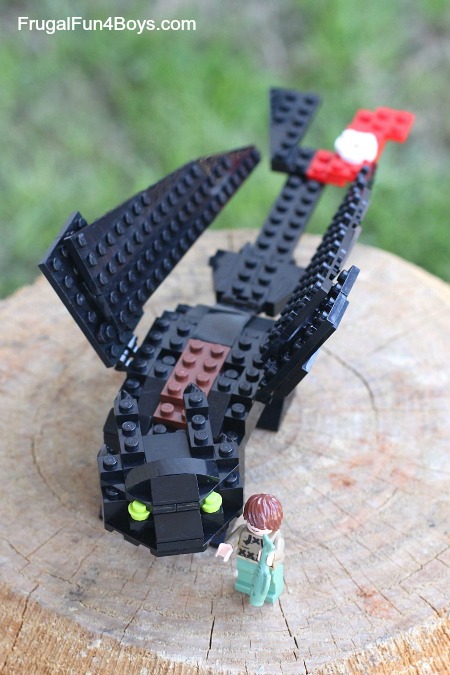 The hair that we used for Hiccup was from a young Han Solo character that came with a LEGO Star Wars movie. We think that you can also find similar hair on some of the Lord of the Rings mini figures. 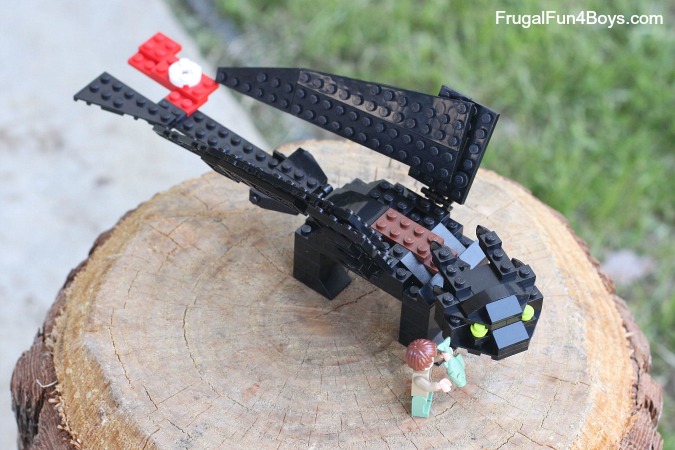 The eyes were the hardest part. It would have been fun to make eyes with black pupils, but we just could not figure out how to do it with the pieces we own! We also wanted to add a tongue, but couldn’t figure that out either.

Toothless can turn his head, move his tail, and move his wings two ways. 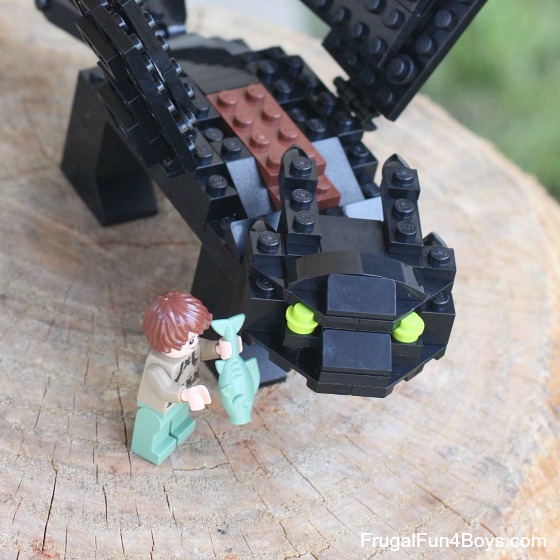 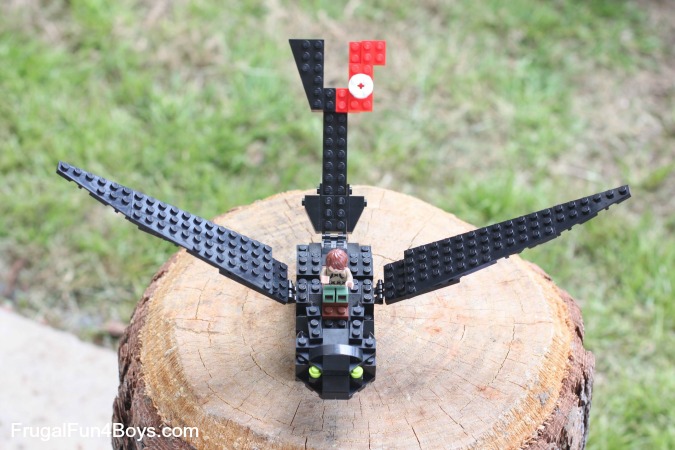 Ready to build one? Here’s how we made our Toothless. 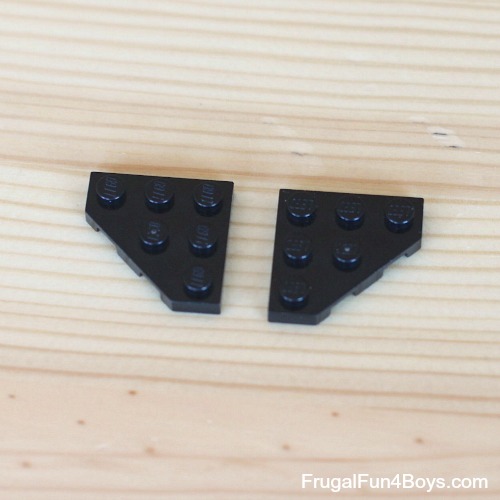 Step 2: Add a 2 x 3 flat brick and two 1 stud flat bricks. The only reason that we used a round one on one side was because we couldn’t find another square one! Square would be better. The slanted brick goes on the front two studs. 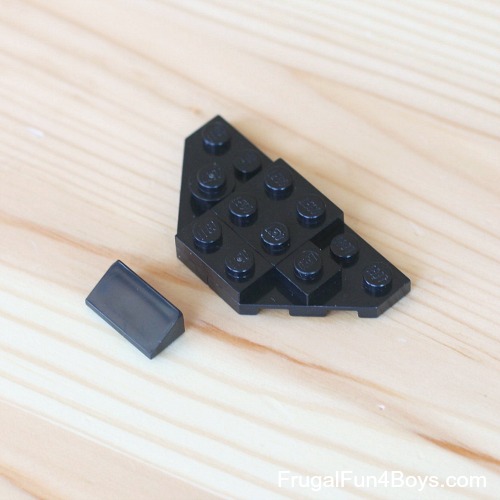 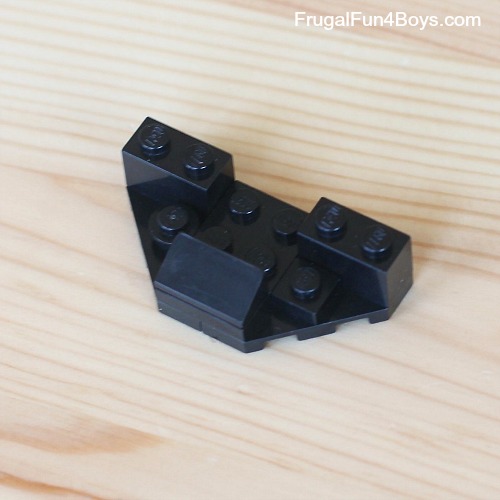 Step 4: Add two round green bricks and a flat 2 x 1 black brick between them. 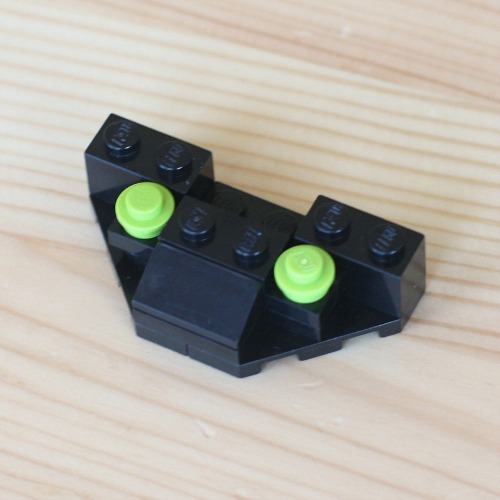 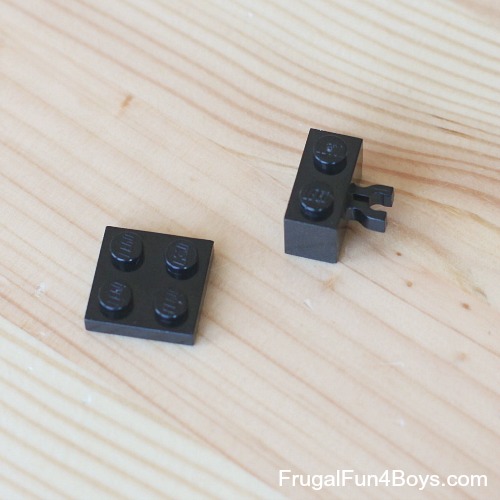 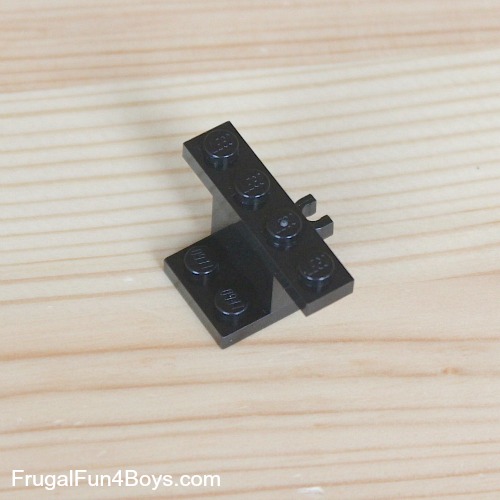 Step 7: Build the top of the head. This is a new section! Start with two flat bricks the same shape as the ones in step 1. 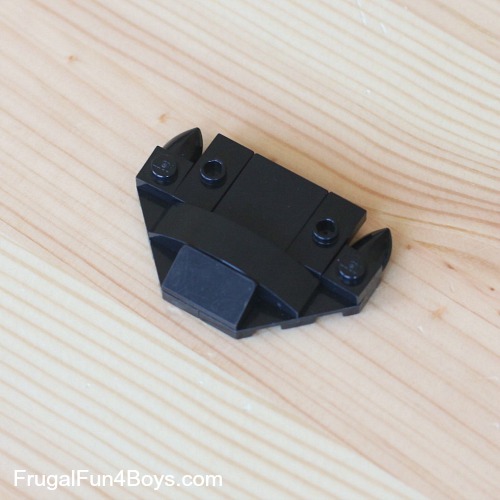 Step 8: This is what the back looks like for the top of the head. 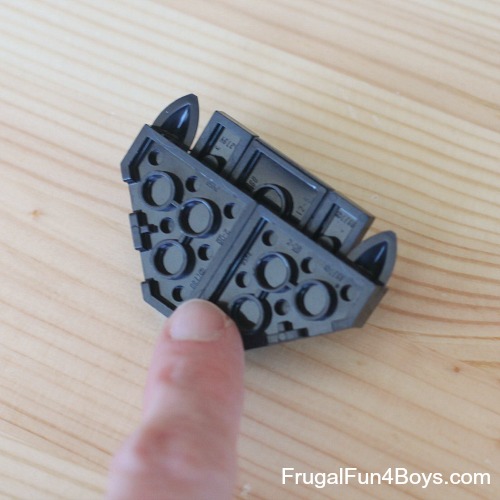 Step 9: Assemble the three parts of the head. I have included a couple of views. 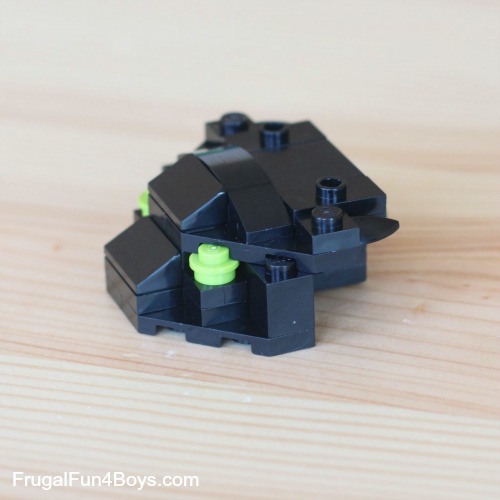 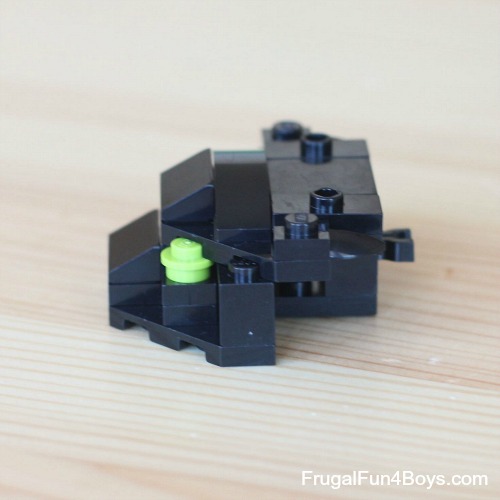 Step 10: Add pieces like this to fill in the head. 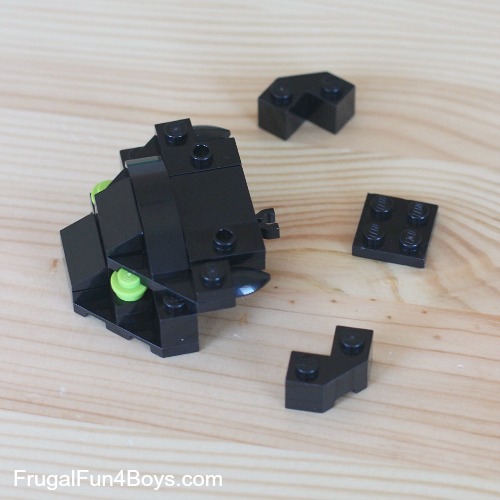 Step 11: Add a slanted brick to give the bottom side of the head more shape and two 2 x 1 flat bricks for stability. 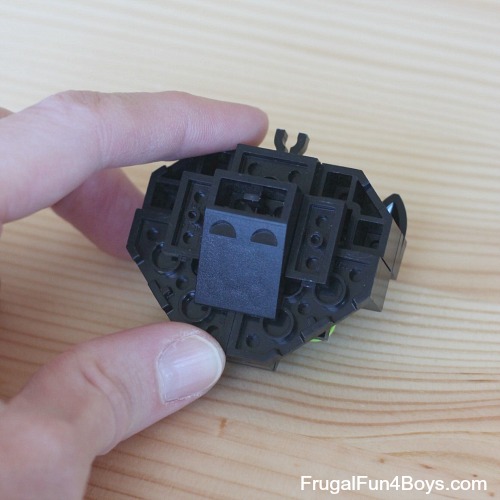 Step 12: Add the horns/ears/whatever they are. 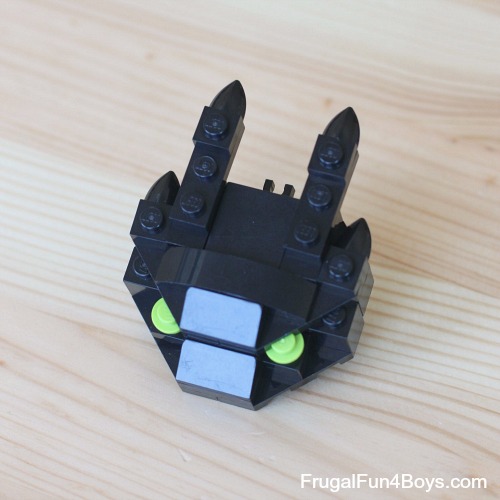 The body is pretty straightforward, so I am not including step-by-step instructions for this. 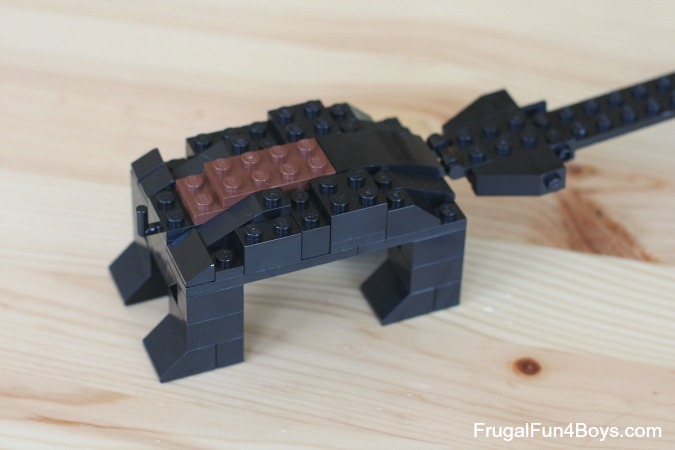 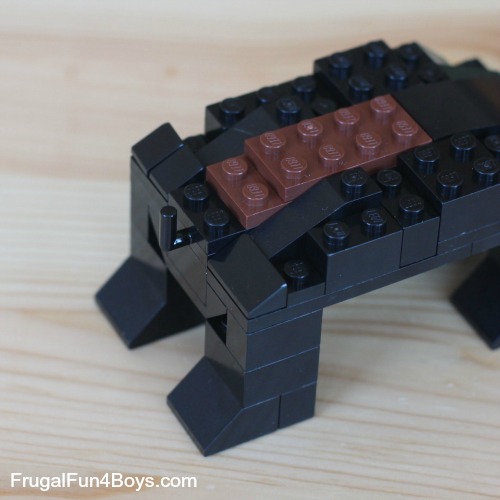 Here’s how we built the tail: 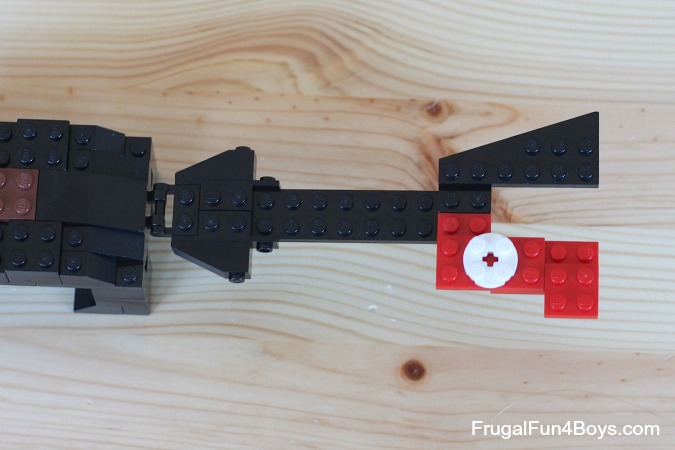 The wings are made out of two sections. 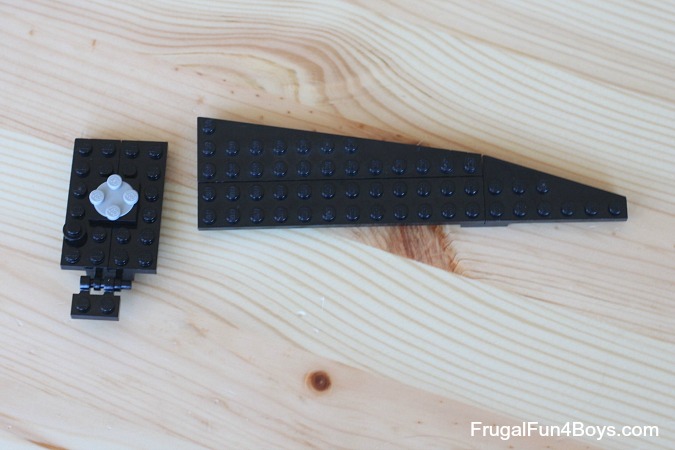 Aidan put a round one stud brick on the wing to keep it from swiveling all the way around. That would look a little weird! 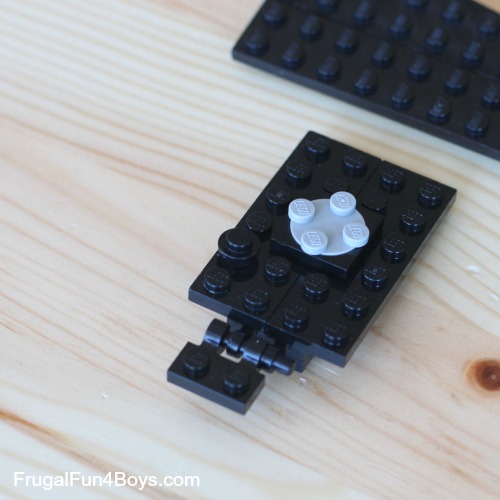 In the picture below, you can see how the black stud keeps the wing from spinning the wrong way. 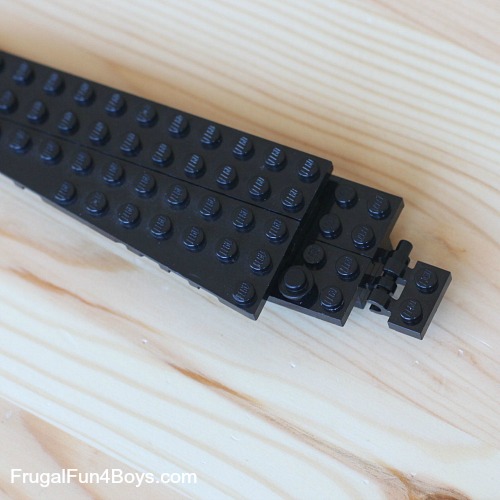 The completed Toothless can moves his wings two ways, move his tail up and down, and turn his head! 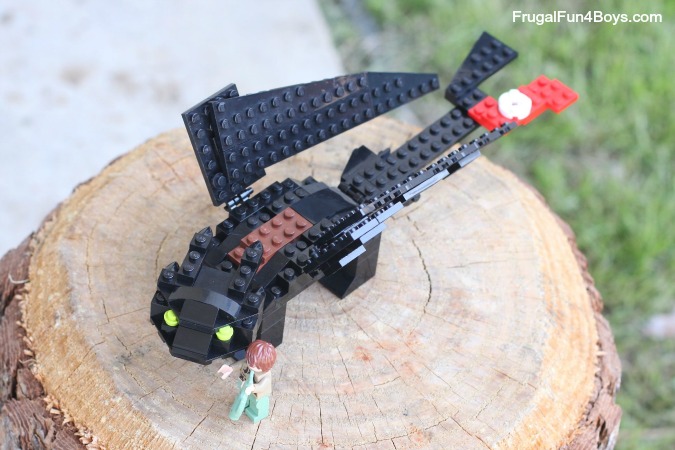