We have been on a quest for the perfect water balloon launcher for several years now. In 2012, we built a sling shot out of PVC pipe. It did not launch water balloons at all, although it worked for balls. In 2013, we tried a catapult, and it didn’t work for water balloons either. We quickly realized that their weight and their wiggly shape was going to make them difficult to launch! In 2014, we tried a simple catapult with a board. It worked well, but this idea is best for big kids as it lacks control. In 2015, we tried again. We were still looking for something that even a young child could use to launch a water balloon! We built a PVC pipe catapult that we found on the Home Depot website. It looked promising with a bungee cord to provide tension, but it was another flop. We could throw the balloons farther than we could launch them! It is very difficult to transfer energy to a water balloon.

But this year… SUCCESS!

This water balloon launcher requires some basic woodworking, but it is so worth the effort. We had excited kids from the toddler on up! We had teen boys saying, “Whoa! Awesome!” We had neighborhood kids circling around on bicycles because they just couldn’t stop watching! (And yes, we did offer them a turn when I noticed them circling!) And we’ll be using this for play dates all summer long!

Basically, this project combines a 3 man water balloon launcher with a sturdy wooden frame. Three man launchers are fun if you have three friends of equal size, but what if three people don’t all want to play? Or their heights don’t match up? This way, anyone can shoot the launcher. 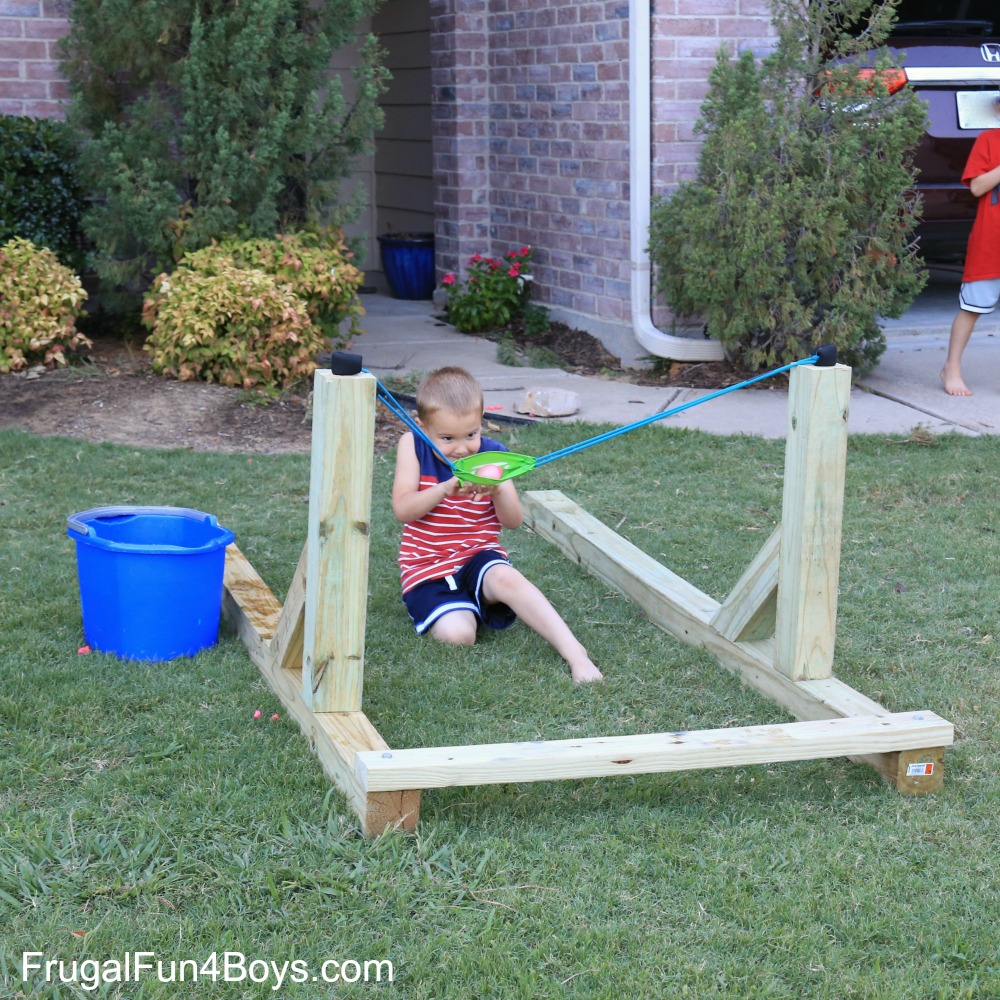 “Can I shoot another one?” 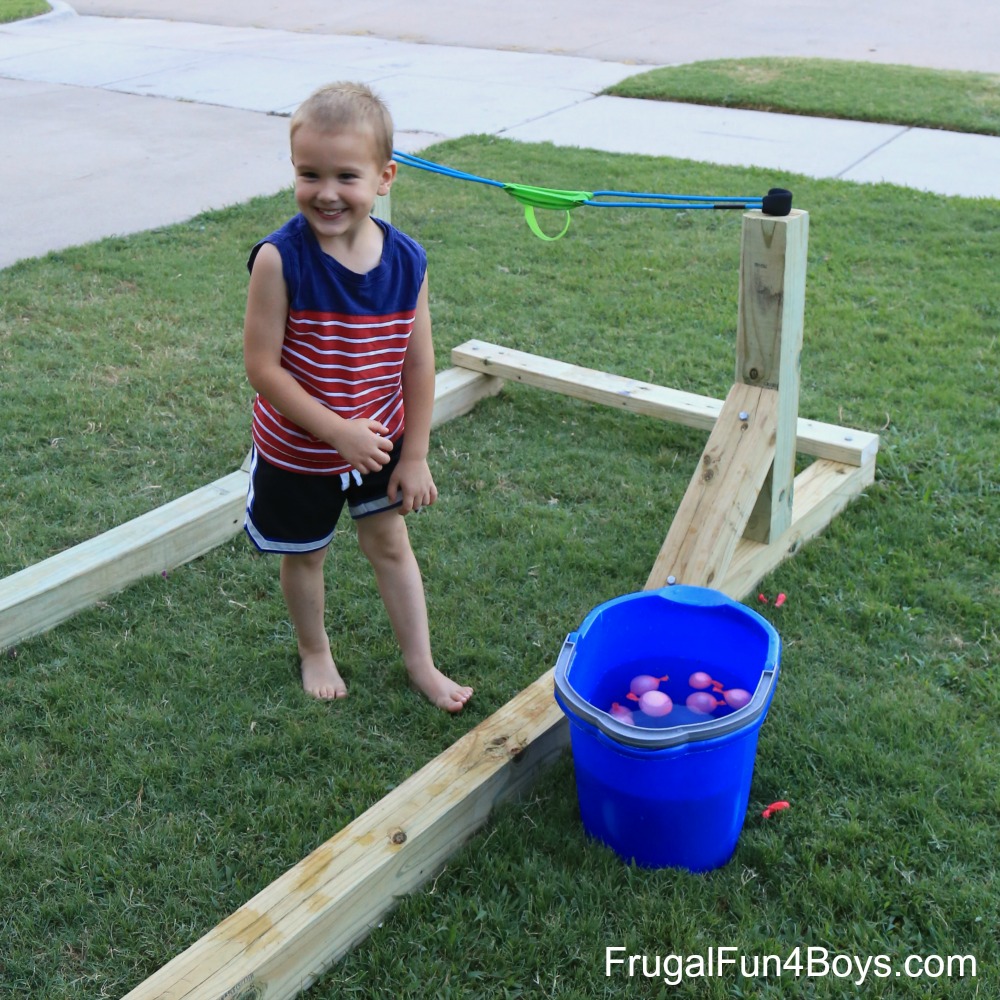 We got the idea for the frame from this Angry Birds tennis ball launcher. They had used a stretchy exercise band, so we tried that first. Although it shot tennis balls well (for us too – not just in the post we read) it just didn’t work with water balloons. They were impossible to hang on to! Jordan found a 3 man launcher for $10 at Walmart, and the pouch with a handle made all the difference. 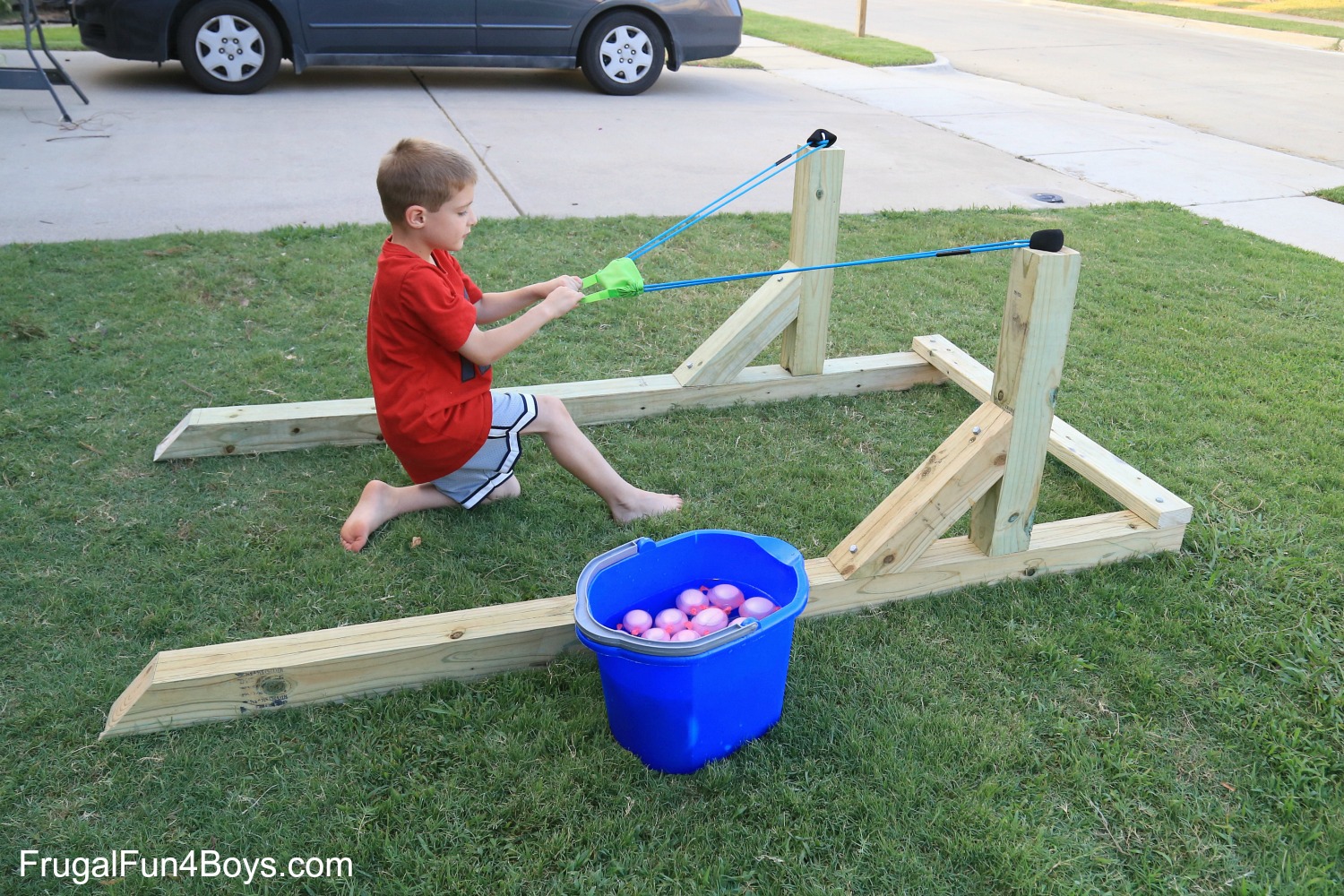 Can you see the balloon in the top right corner? 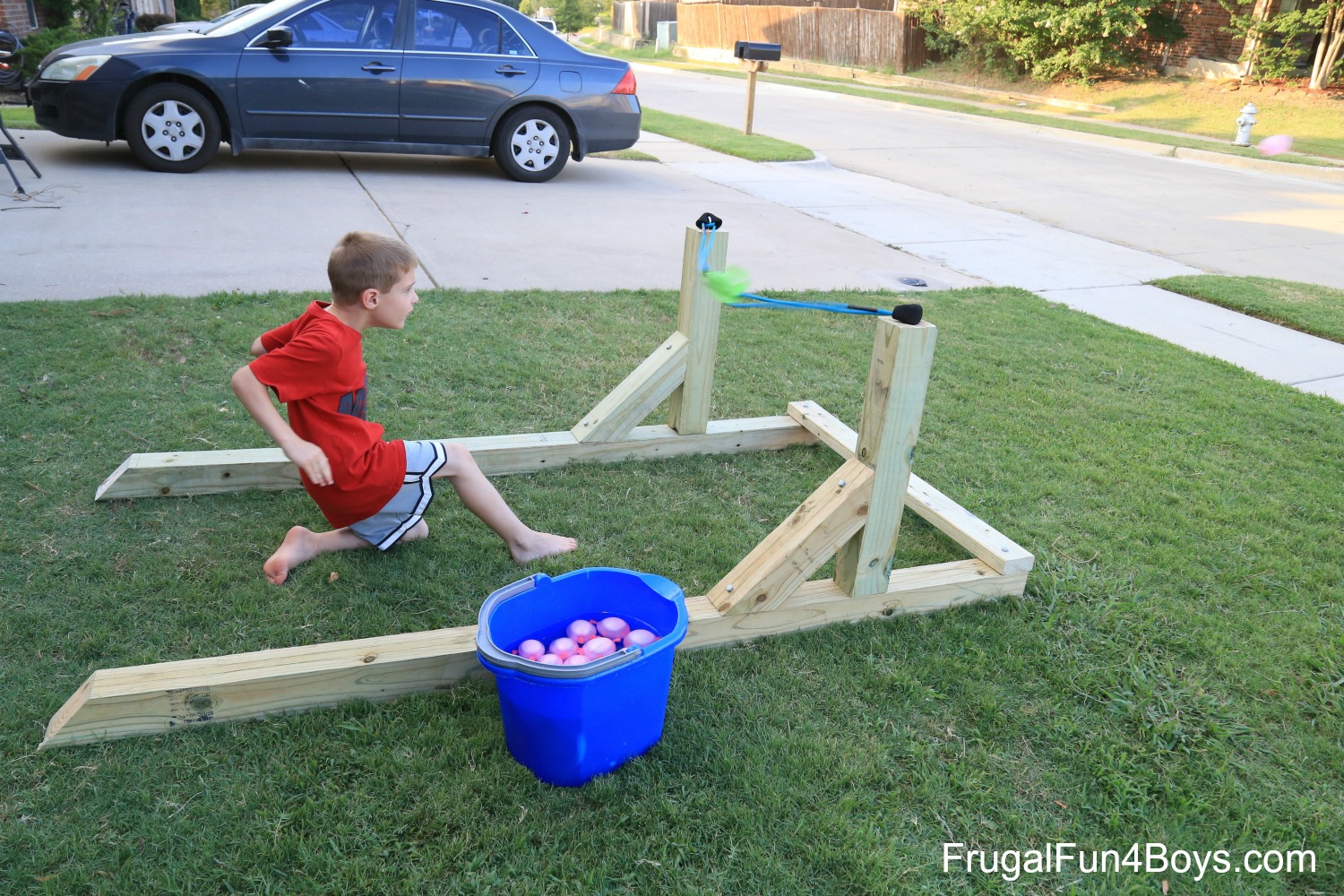 This photo shows how far it shoots. We aimed it toward the street across from our house, and big kids (10+) could easily shoot it three houses down! 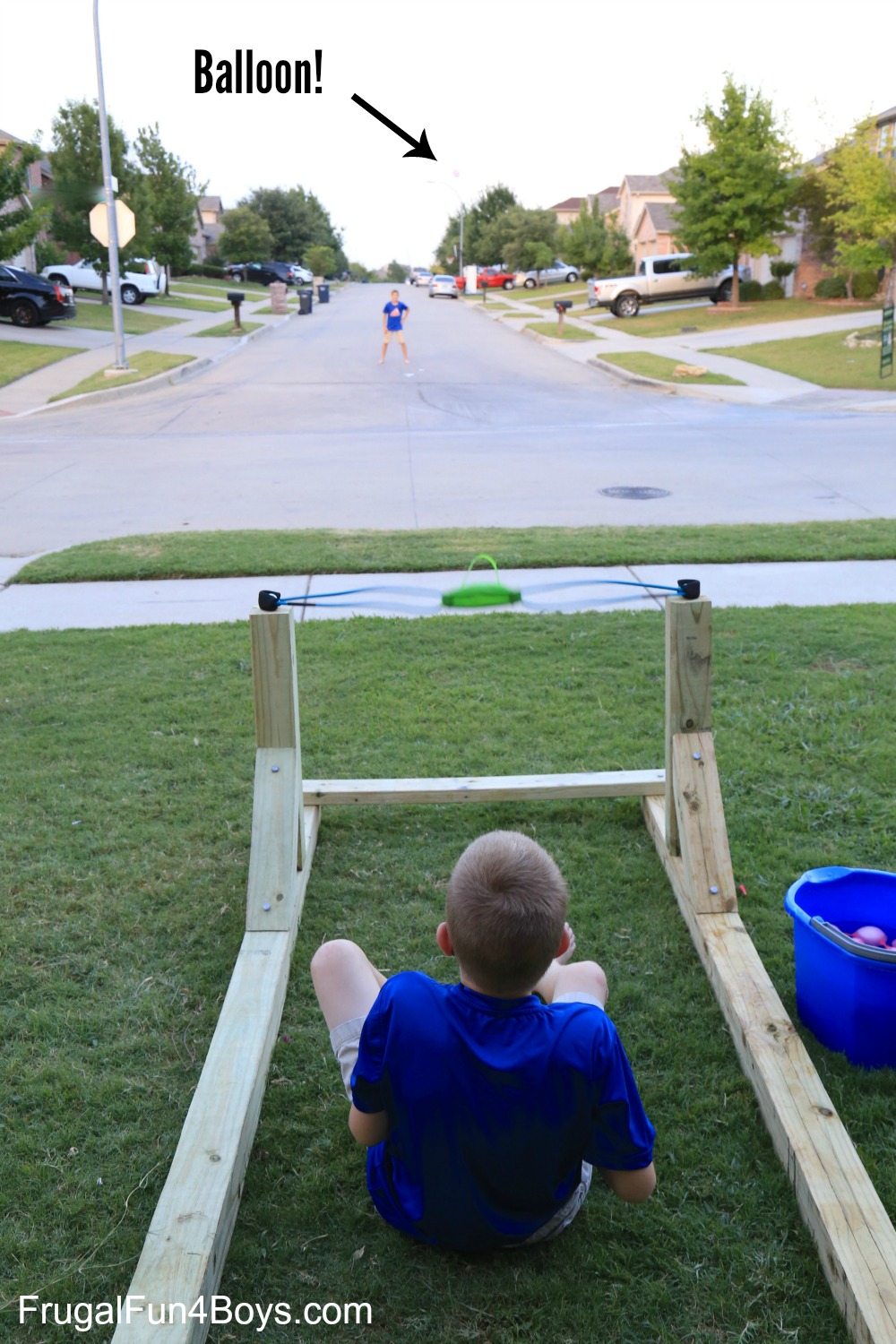 NOTE: This set-up requires adult supervision to watch for cars, and we also took breaks to go out and clean up all the water balloon pieces. Don’t be annoying neighbors!

Ready to Build One?

Savings tip: We used pressure treated lumber. You could cut down the cost quite a bit by using regular pine boards.

Also, we’re going to show you in a minute how to take down the launcher for easy storage, so this is definitely something that can be used from year to year.

NOTE: Neither of us have a whole lot of wood working experience, so if you see a better way to do this, go right ahead!

Step 1: Cut the legs for the launcher using the 4 x 4 lumber. Ours are 6.5 feet long. Then cut two 2 ft. sections for the arms that stick up vertically. Cut a 3.5 foot section from the 2 x 4 – this will be the support that goes across the front of the launcher.

Step 2: Pre-drill the holes for the screws. 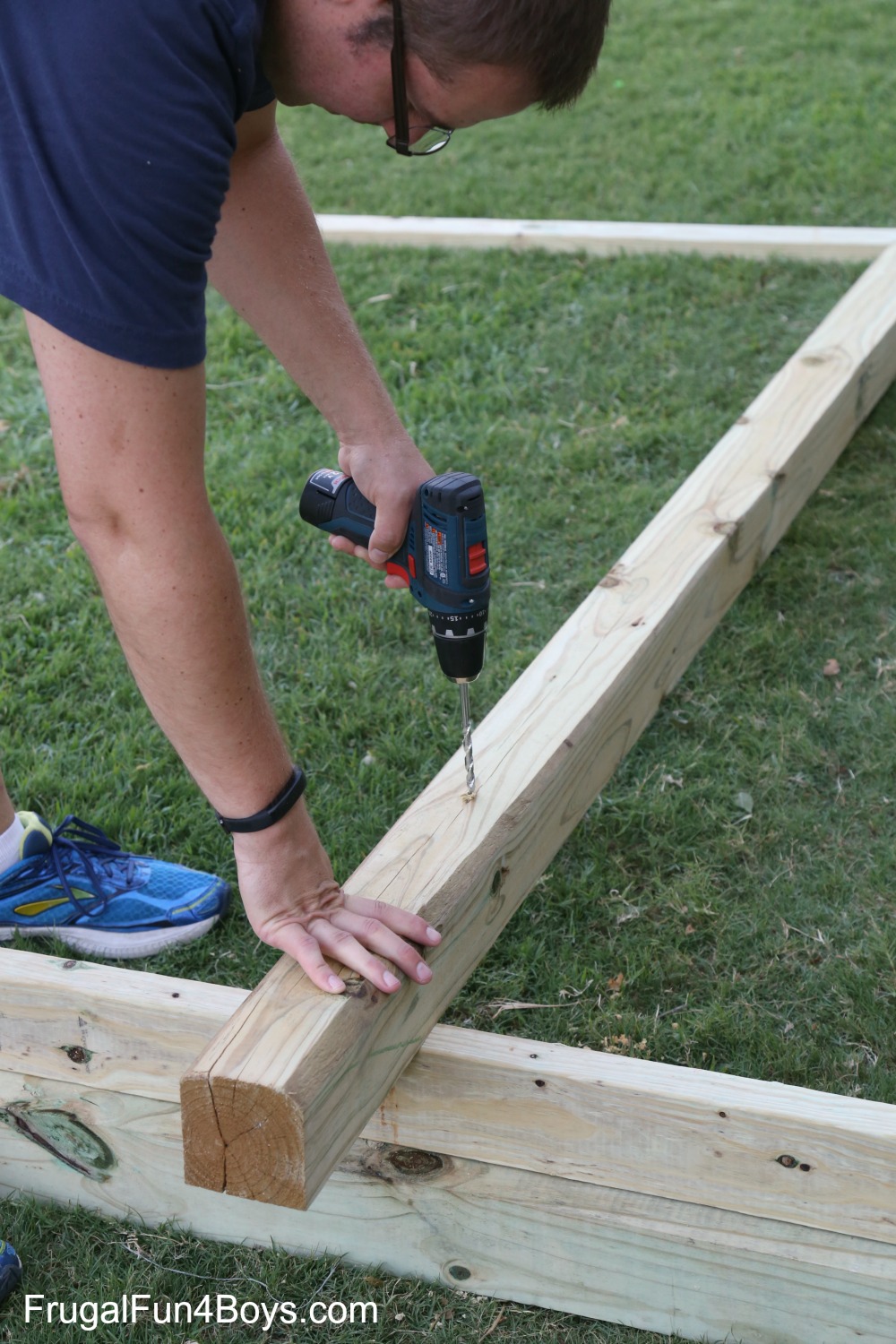 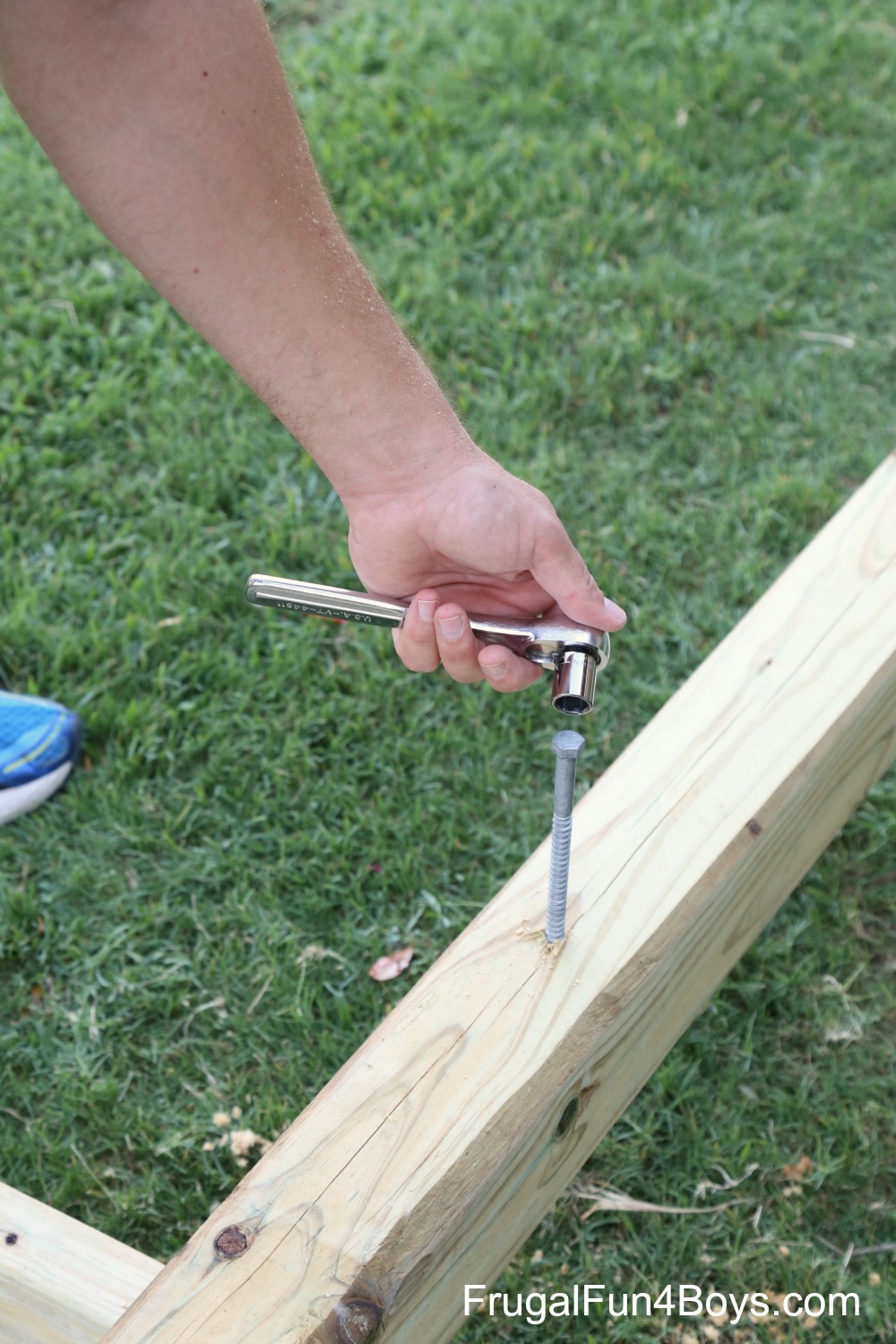 Then he held the board in place while drilling the screw through the wood. It worked! 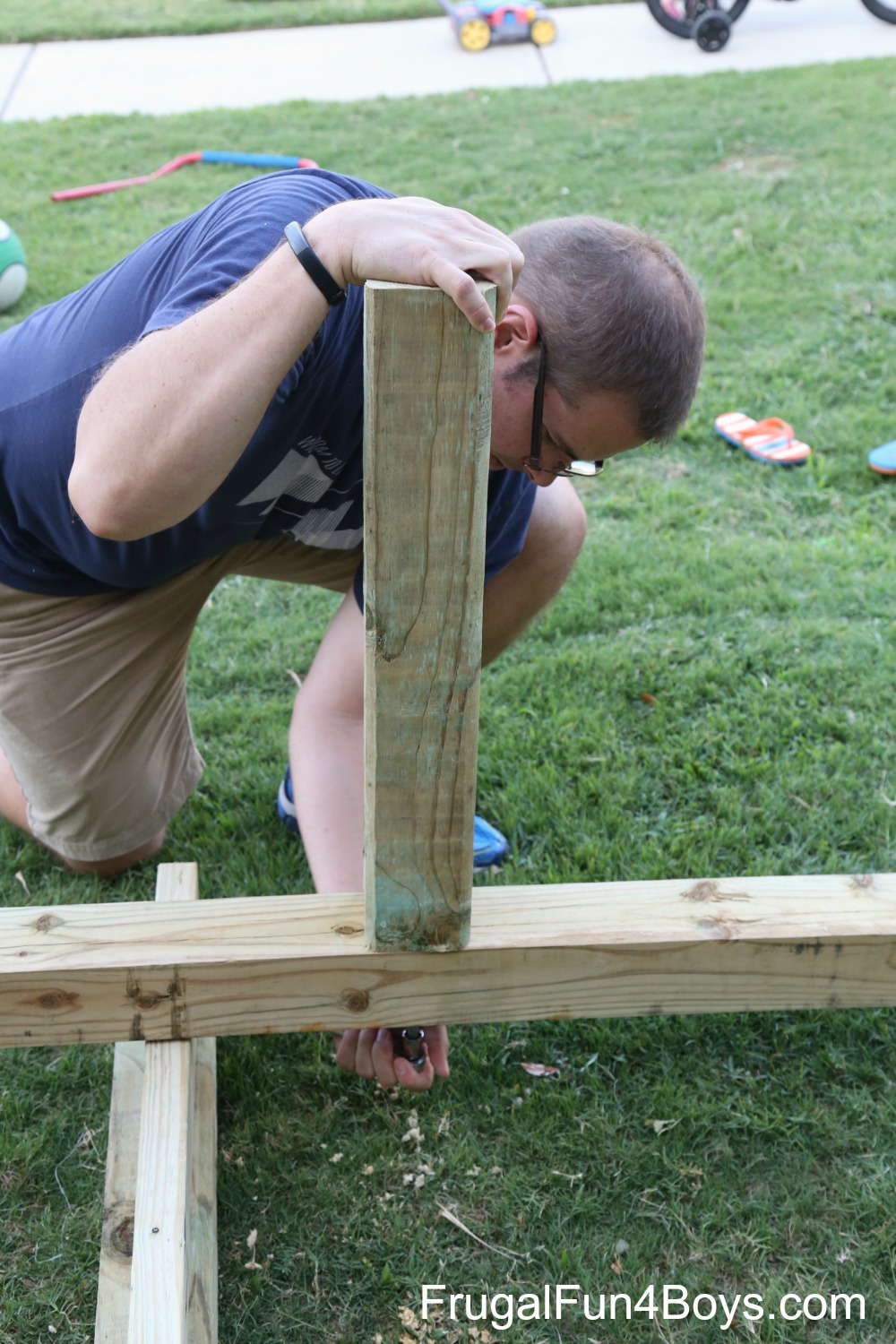 There is one 8 inch screw in each vertical arm, plus two in each support piece. The two shorter screws are in the support 2 x 4 board on the front of the launcher.

Step 3: Cut the support pieces. For this step, we borrowed a power miter saw from a neighbor. That is definitely an item on our wish list now! Then screw them to the frame. 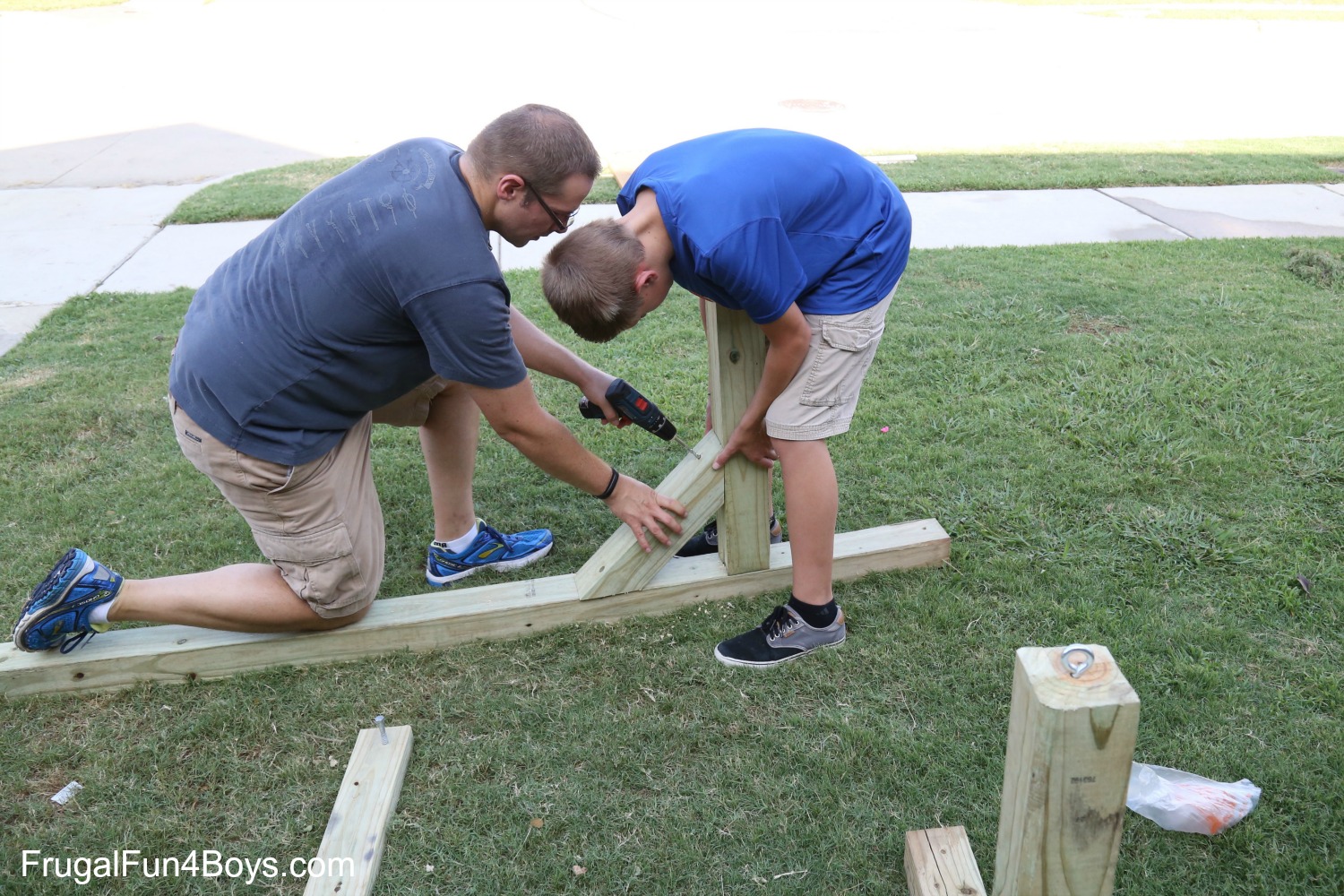 Step 4: Add screws with eye hooks. We put the hand holds of the launcher over each hook. When you stretch the launcher to shoot it, it tightens around the hooks automatically. 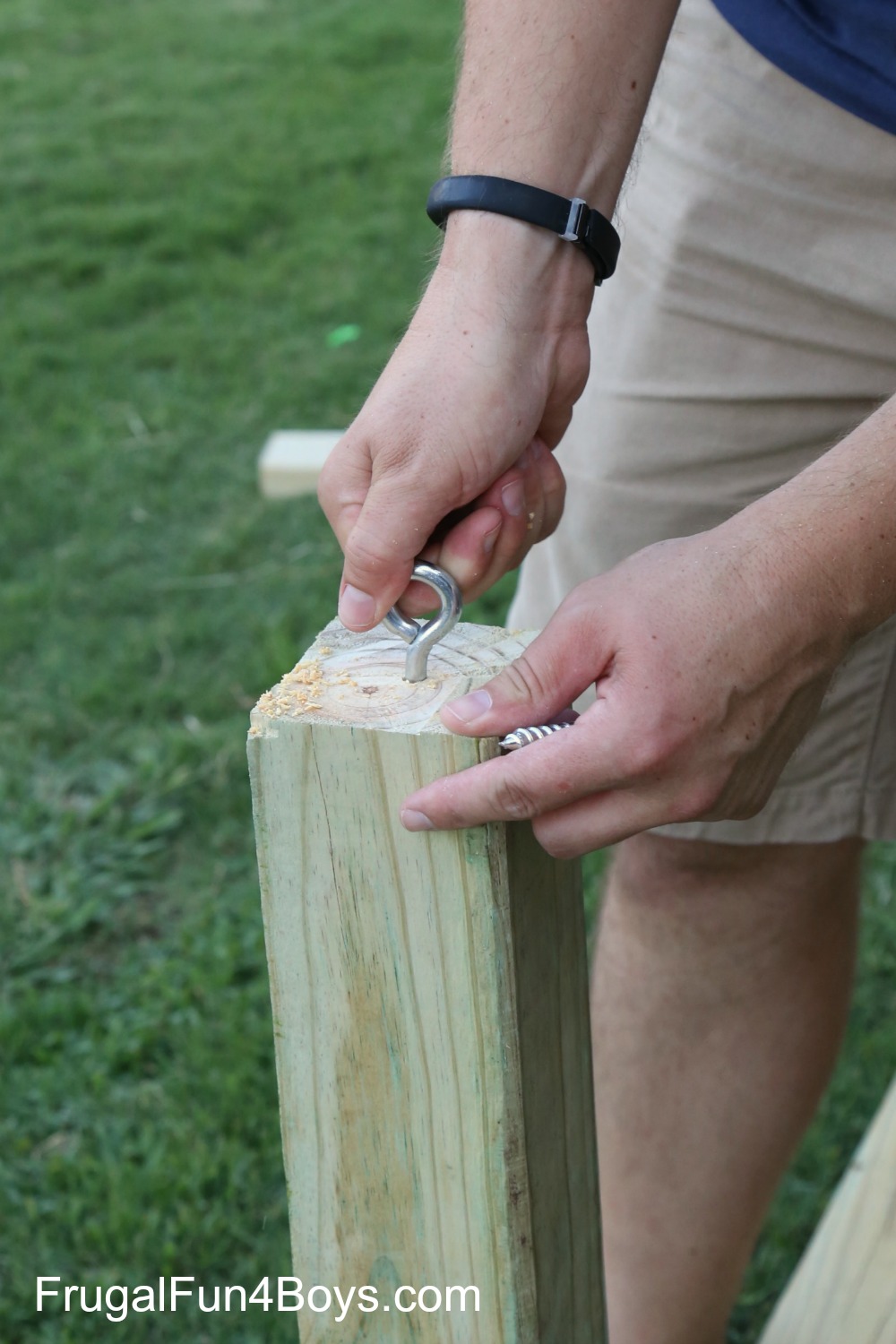 Then fill up balloons (you’re going to want a LOT) and start firing away! 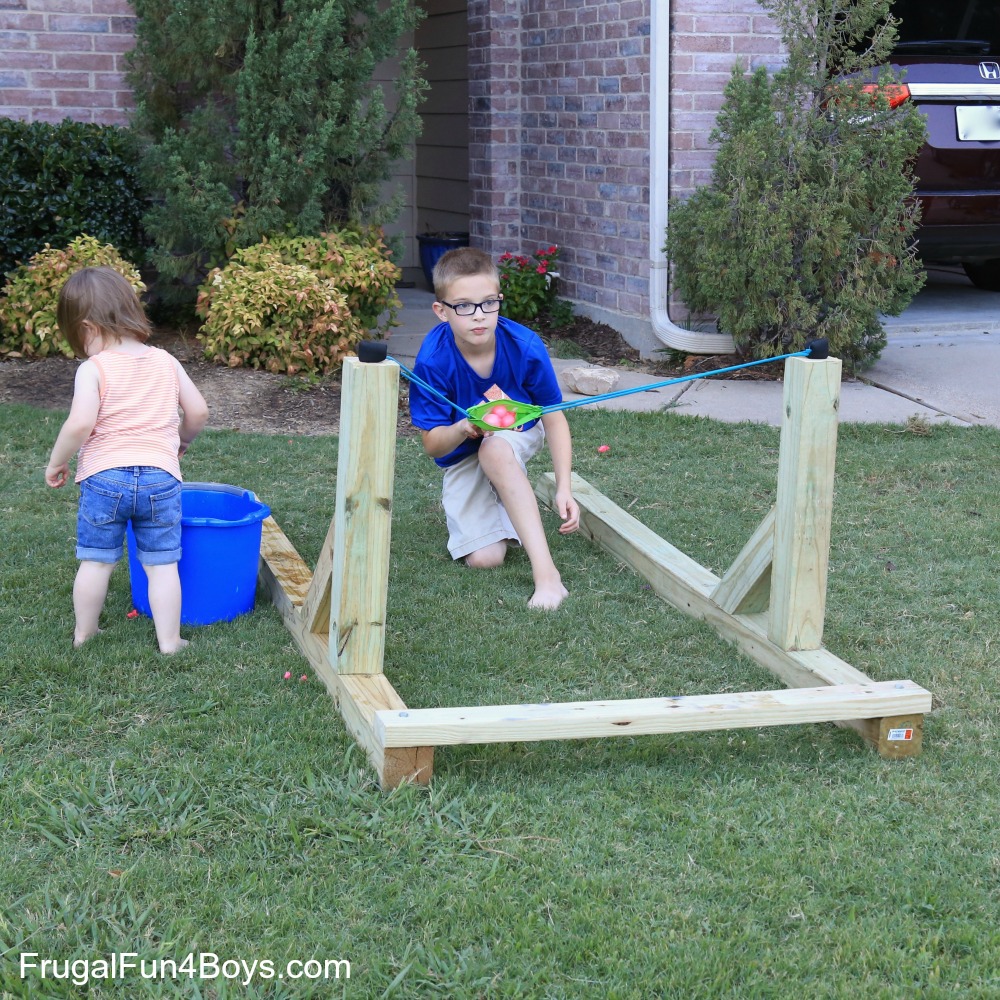 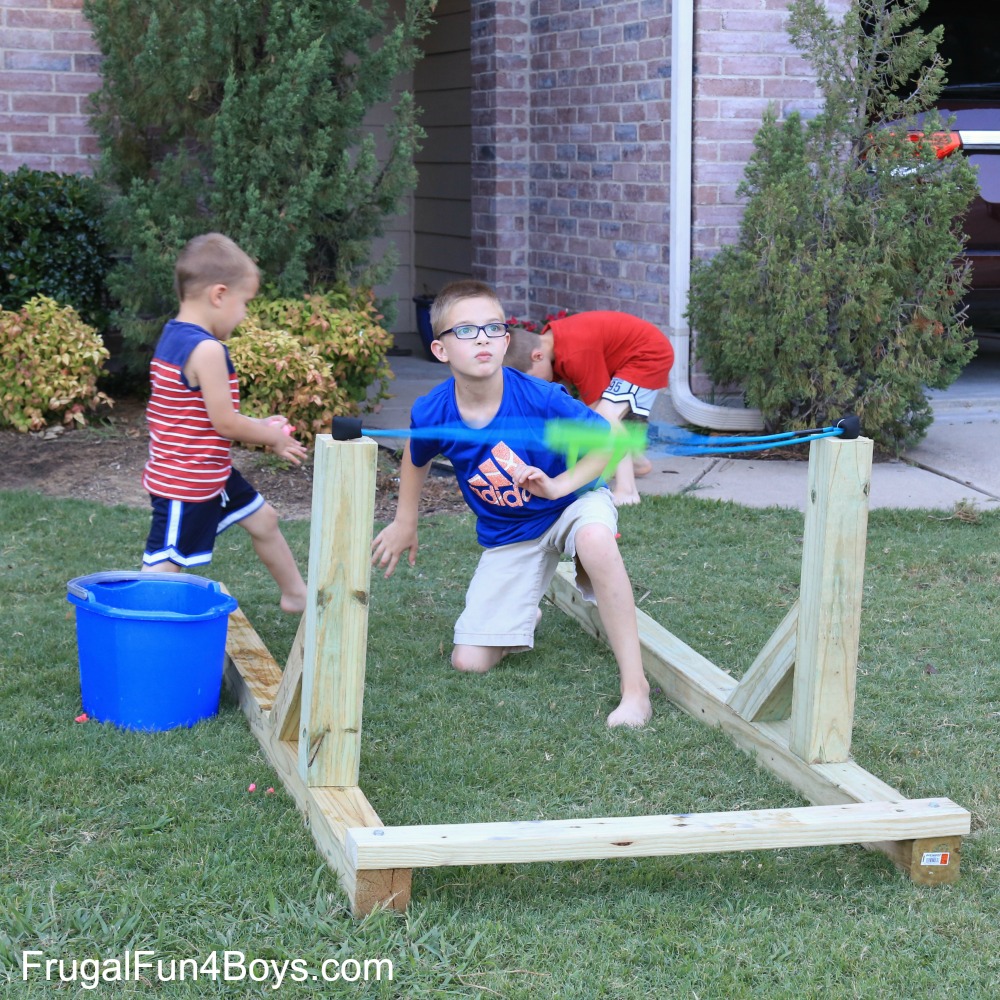 To store the launcher, remove the front cross piece. We are keeping ours in the garage in three separate pieces. If you’re planning to leave yours up all the time, I would add a second cross piece on the back end of the launcher.

Have fun! If you build one, we would love to hear about it! 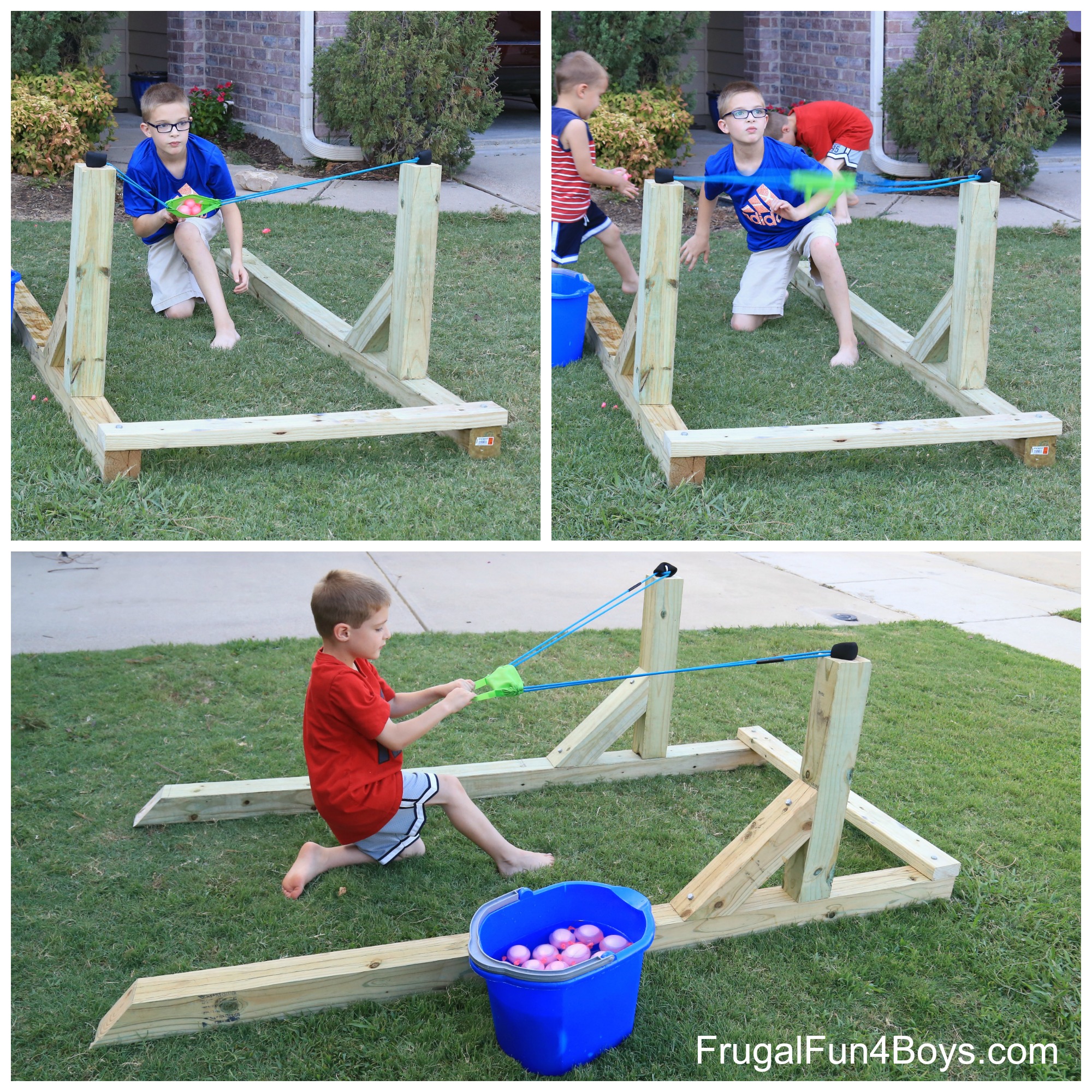