This project was so fun for our entire family.  And while ours won’t last all the way until Halloween (we made them early to share with you all) we have some tips to offer for making your pumpkins look awesome and for keeping them fresh as long as possible. 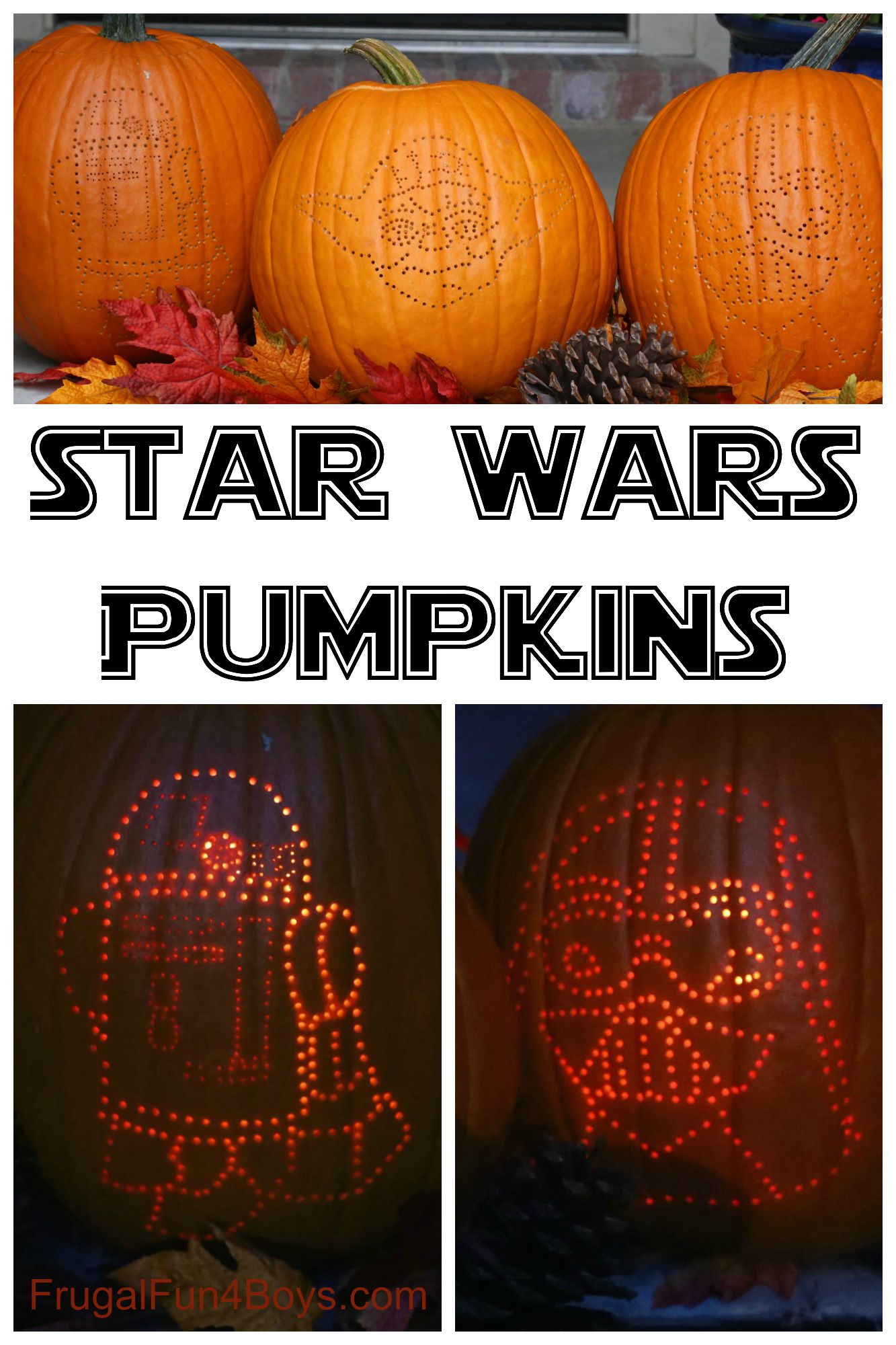 The middle two boys and I found some beautiful pumpkins at Costco for only $6.99 each, so we bought three!  It wasn’t quite the pumpkin patch experience, but we’ll be doing that also later in October.  Pumpkins this nice needed an awesome design!  I have seen several photos on Pinterest of beautiful pumpkin lanterns created using a drill, so we decided to give it a try, except with a Star Wars twist. 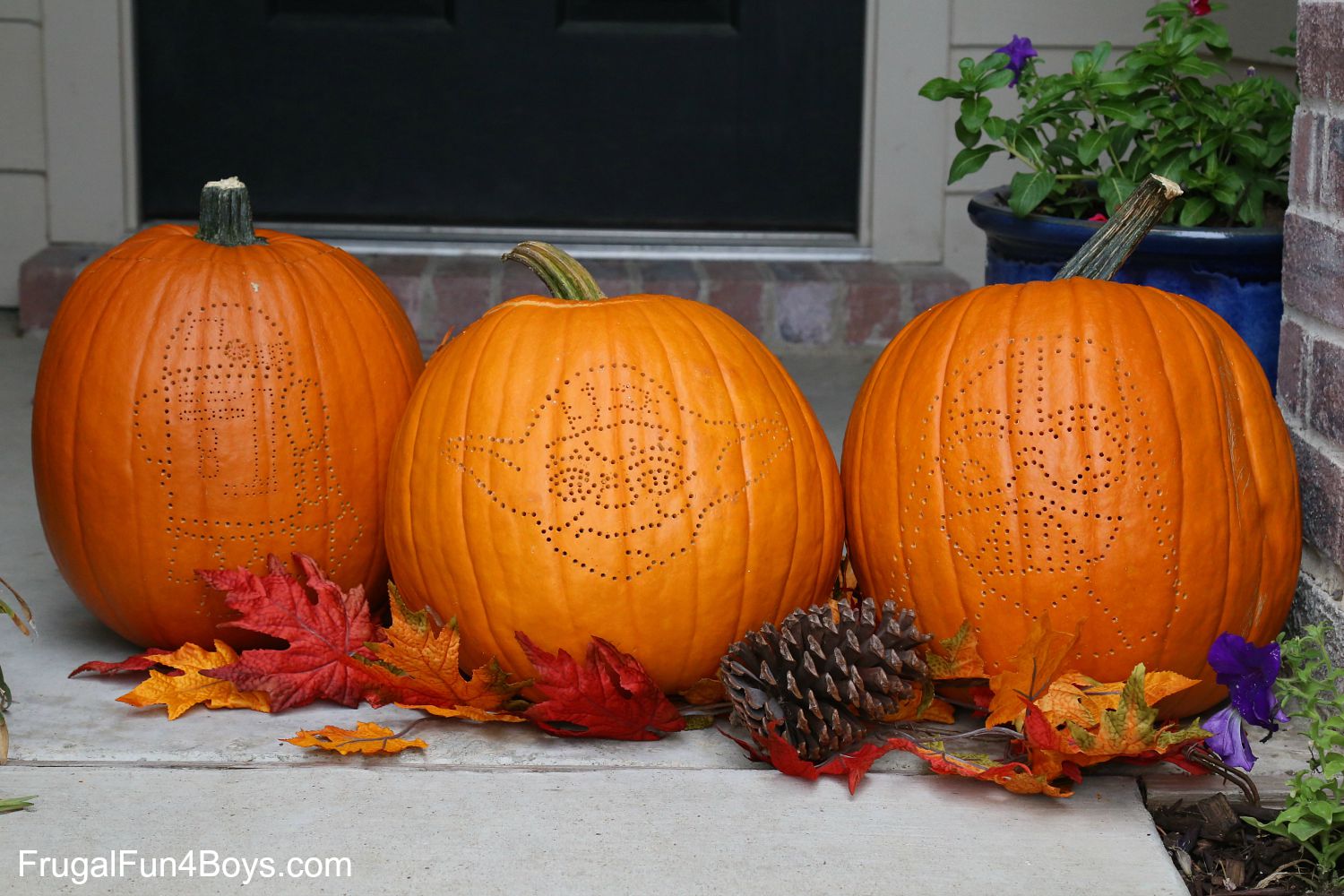 The boys decided that they turned out AWESOME! 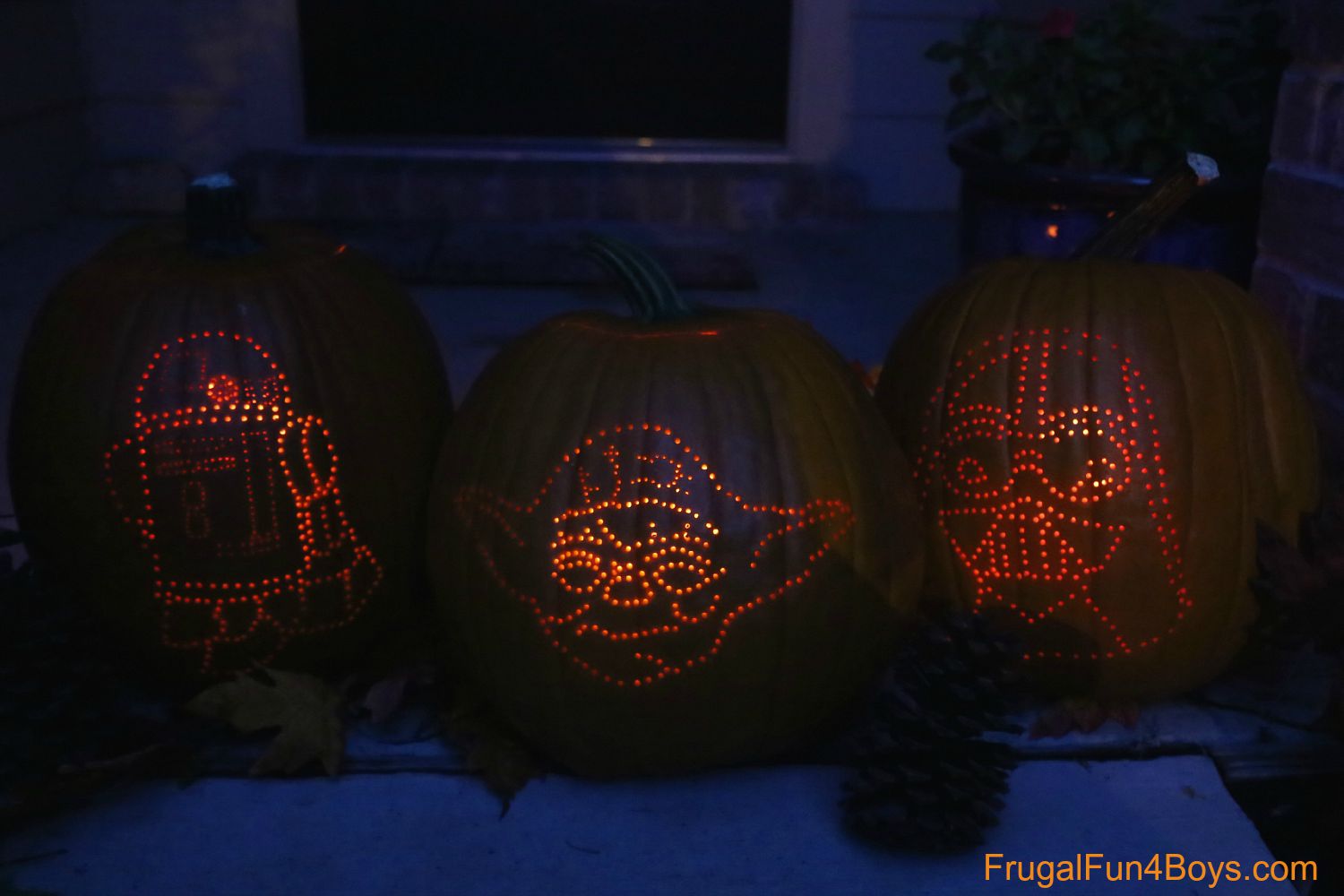 Here’s how we made them! (Scroll down for close up photos of each design.)

Step 1:  Cut off the top of the pumpkin and scrape out all the innards.

Step 2:  Find an image to print of the character you want to make.  We used our all-in-one printer to copy and re-size our images so that they fit the pumpkins we chose.  The images that we used are not mine to give away in this post, but if you do a quick google image search you should find plenty of options! 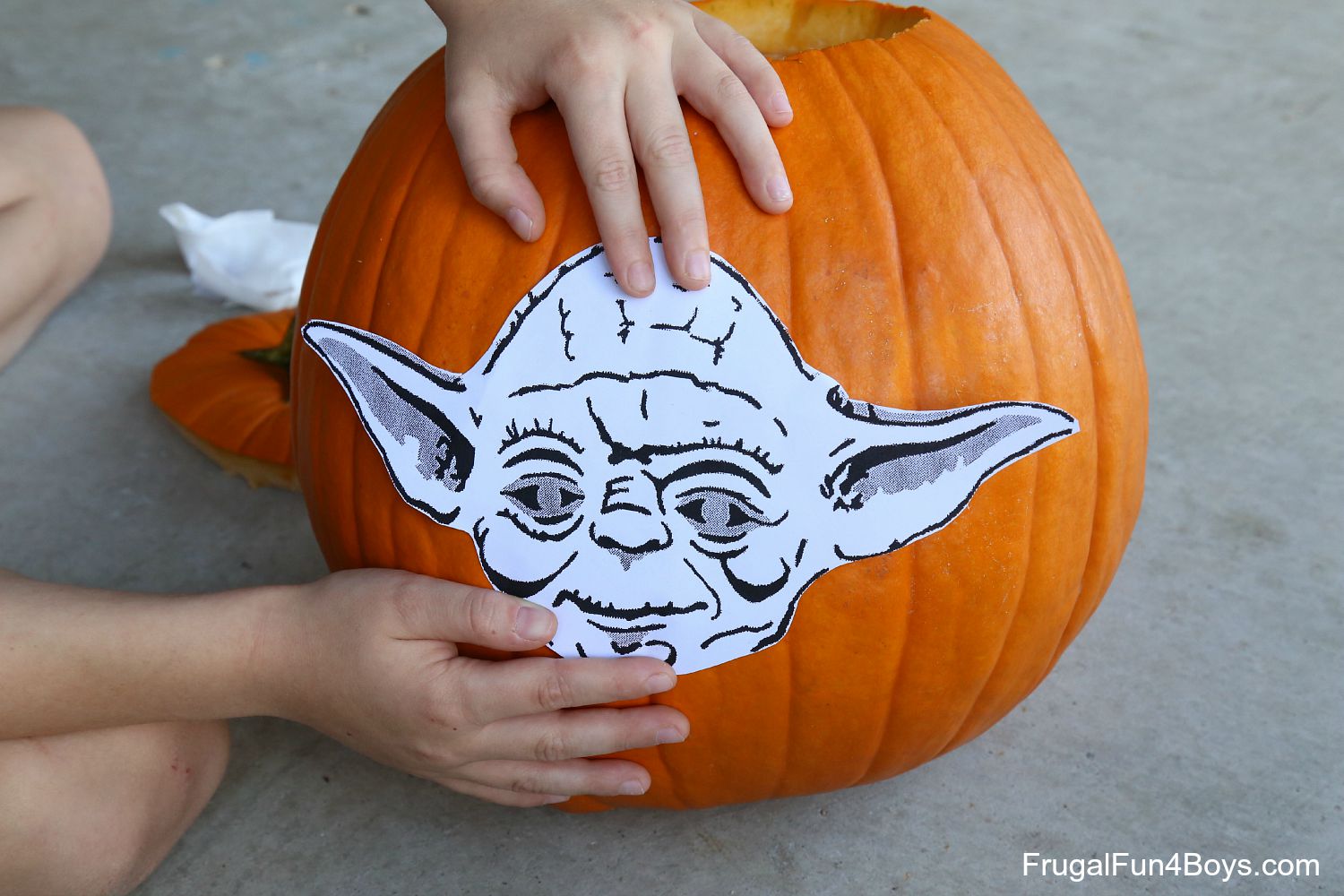 Step 3:  Transfer the outline of the image onto the pumpkin using something sharp, like a nail, push pin, or compass.  Pencil won’t show up on a pumpkin and marker is a little too permanent if you make a mistake.  We used the sharp tip of a compass to make small dots where we wanted to drill.  We started with the outline and then went ahead and drilled those holes. 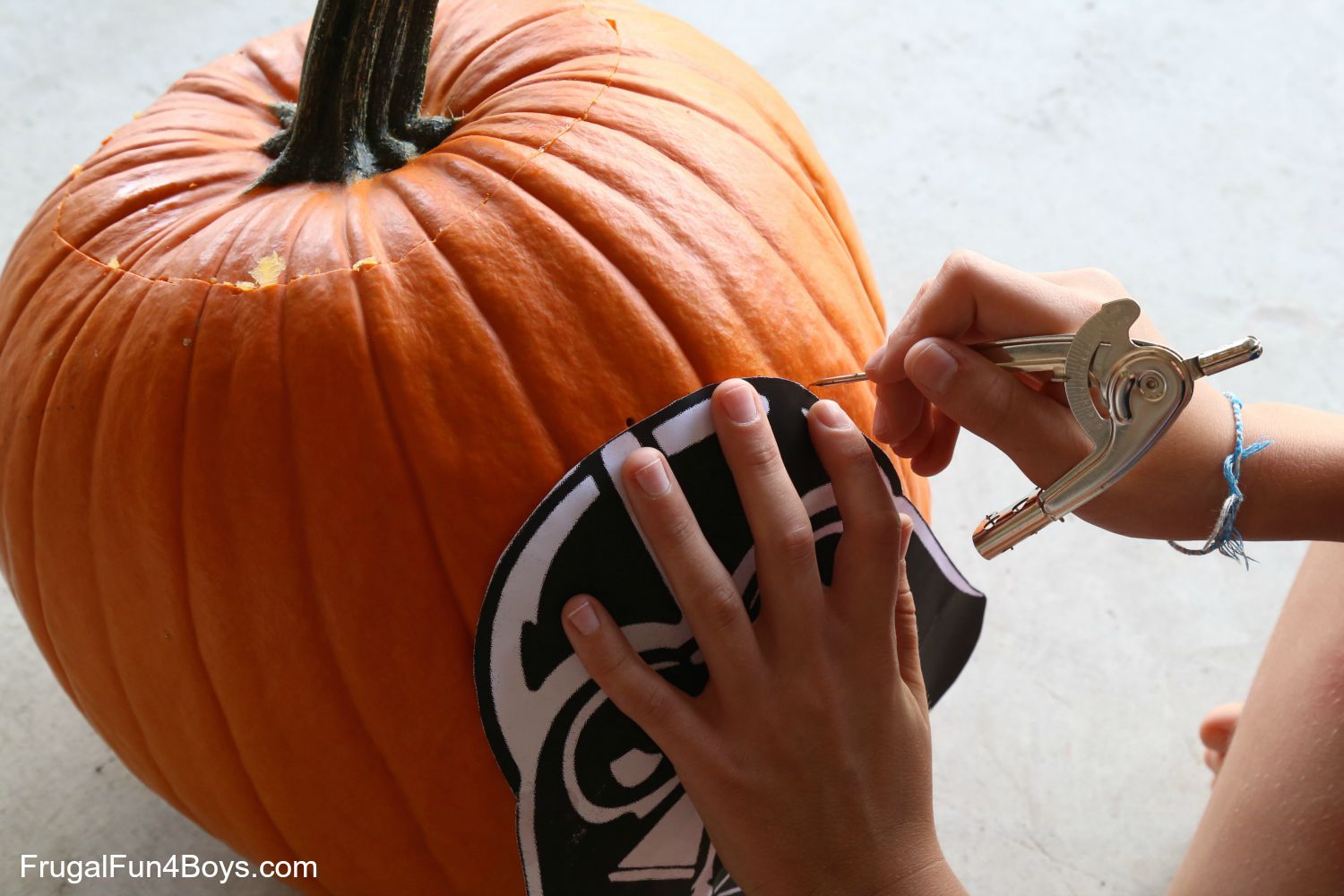 Drilling on the pumpkin is super easy.  Our 12 and 8 year olds were able to take turns with the drilling.  Three pumpkins was a LOT of drilling, so Dad and I did a lot of it too! 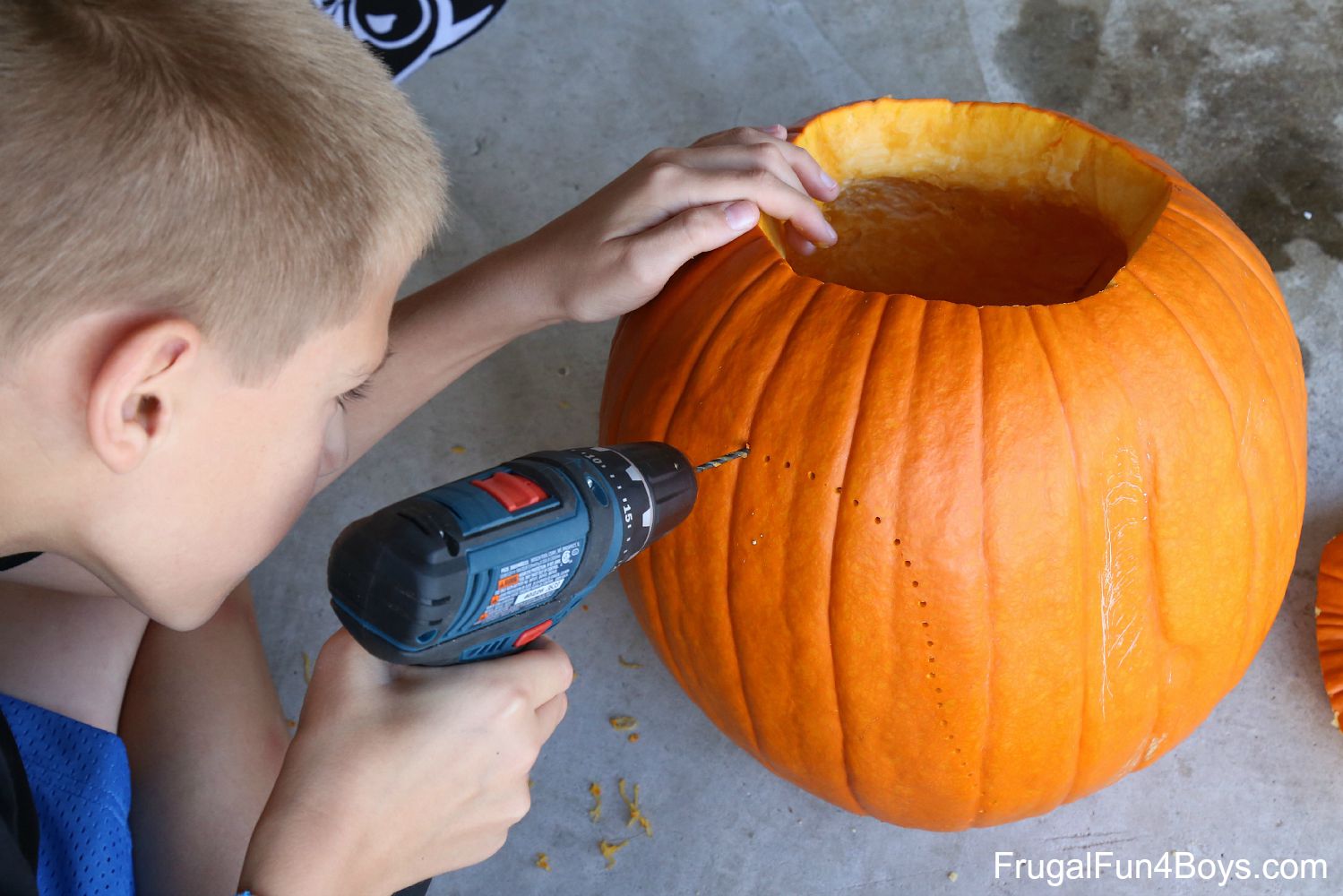 Step 4:  Place the paper image back onto your pumpkin.  Poke your compass (or pin or nail) through the paper to mark the eyes, nose, and other details of the face.  It’s a little tricky, especially if your image is complicated, to decide which details to include with the drill.  We marked a little and drilled a little and then marked some more until the faces looked the way we wanted them to. 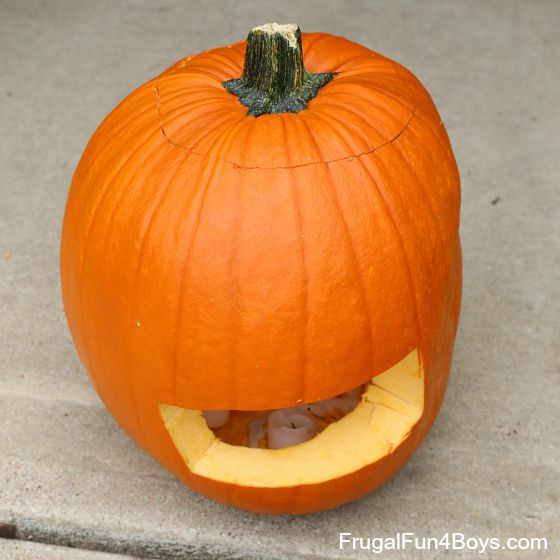 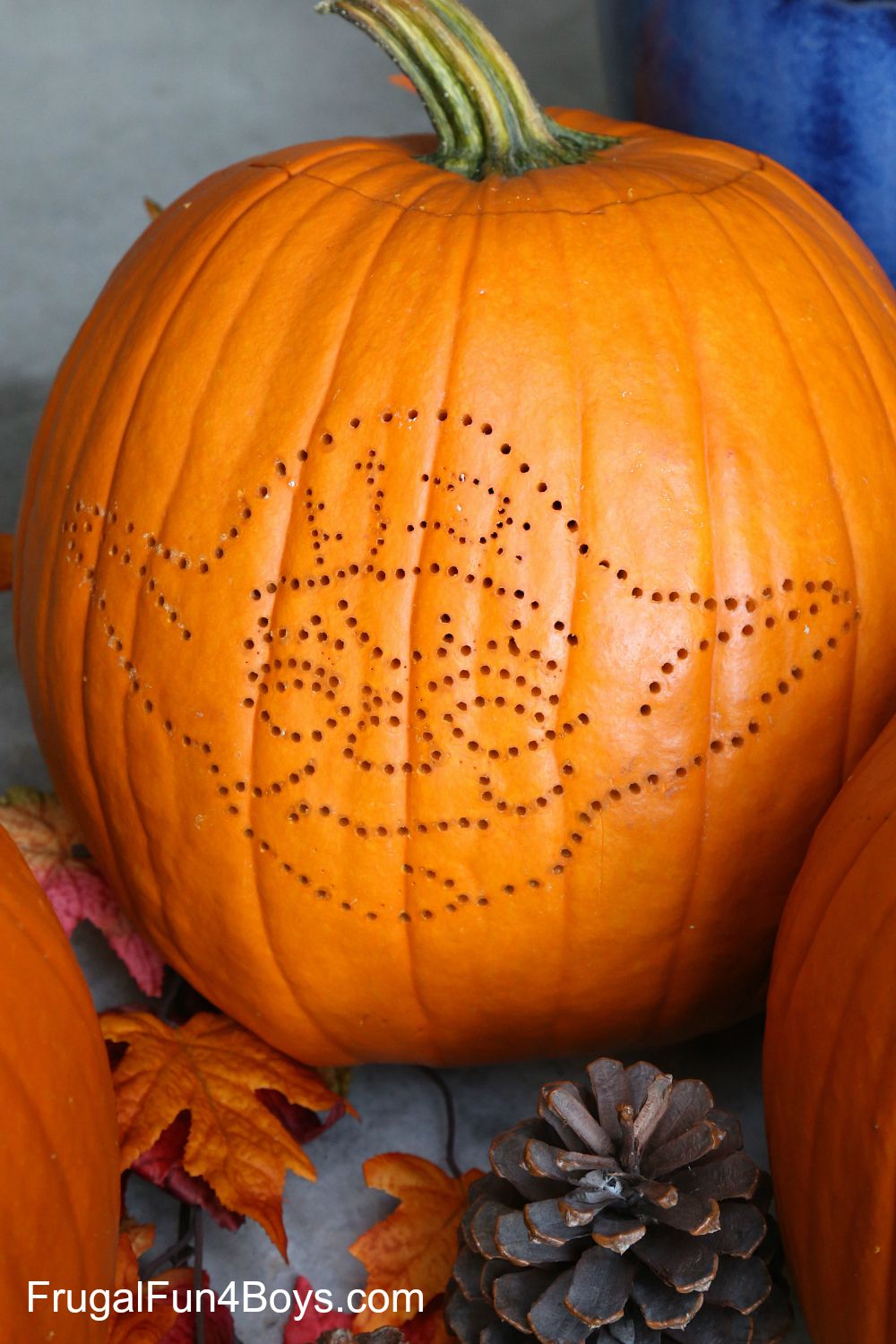 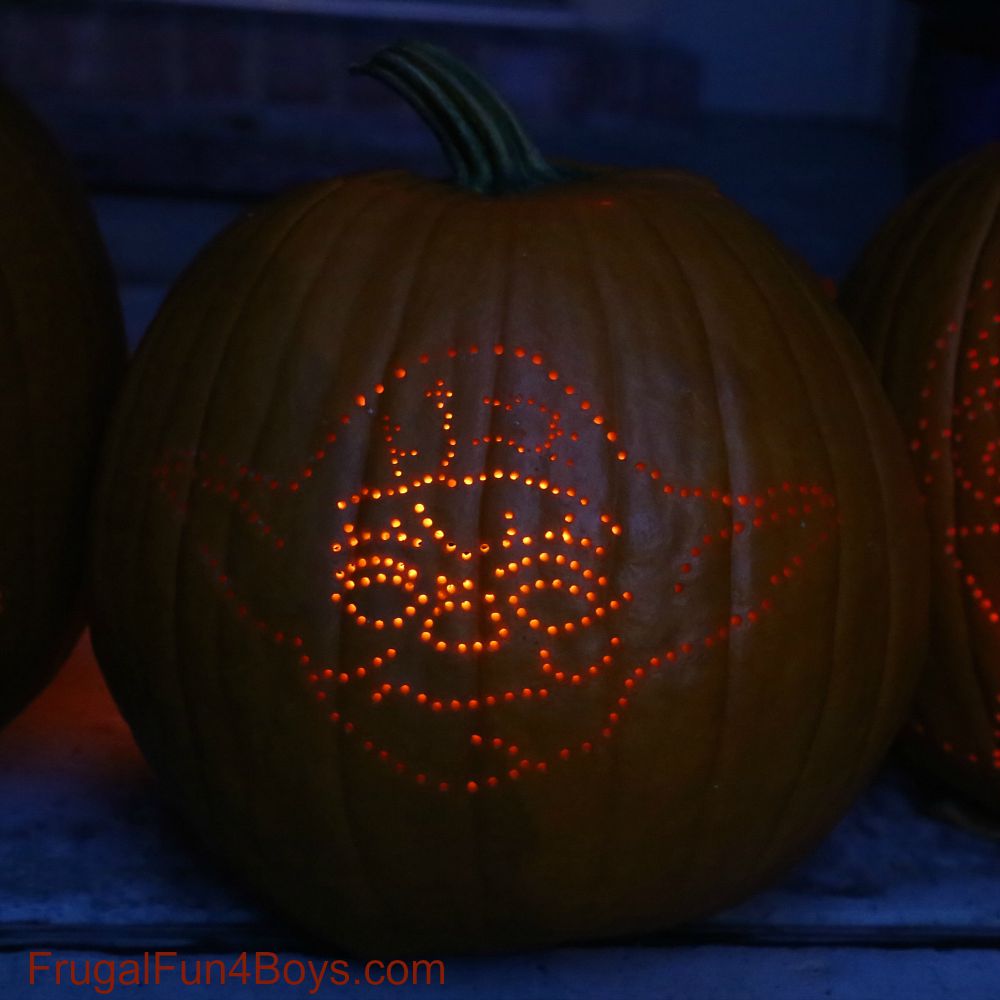 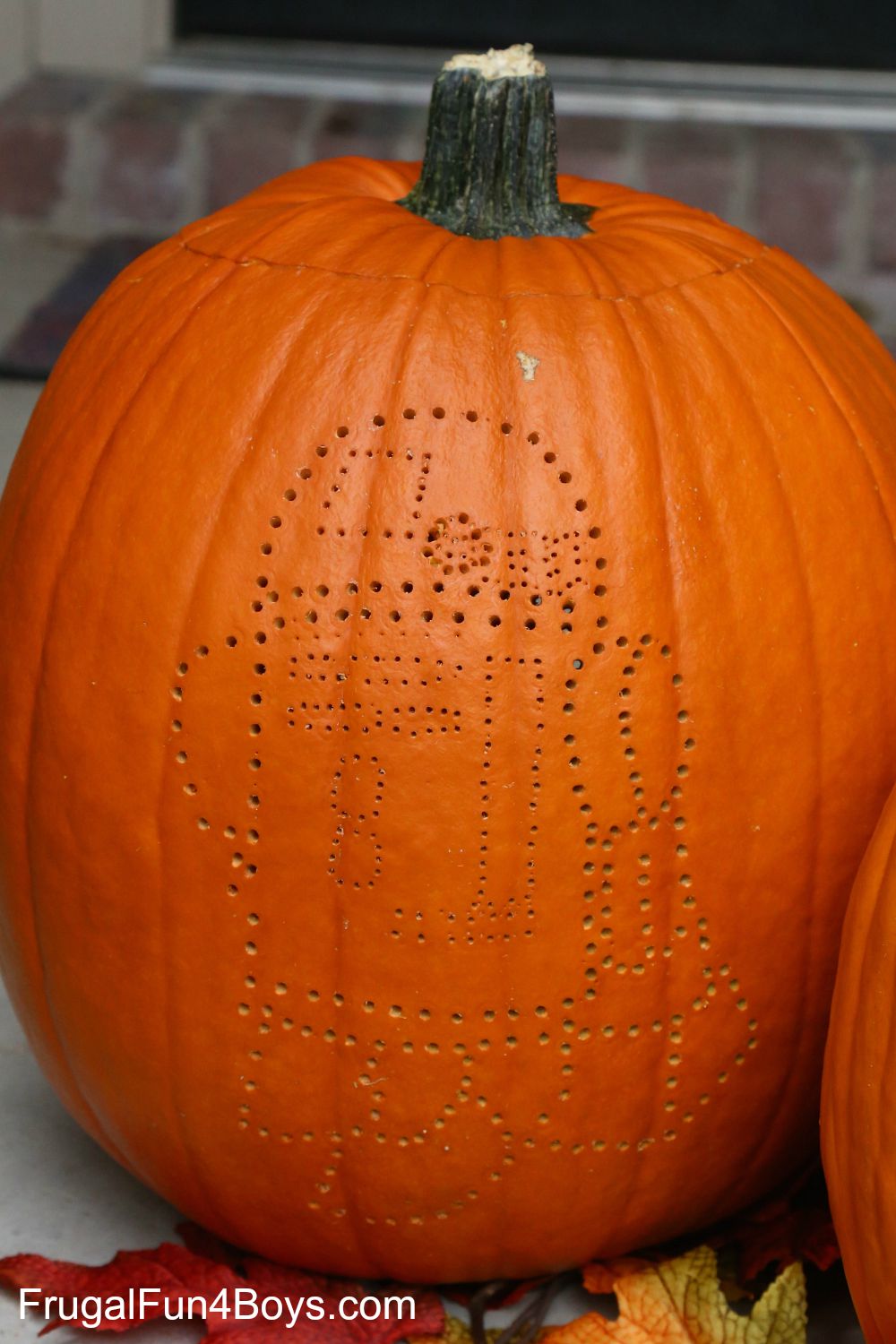 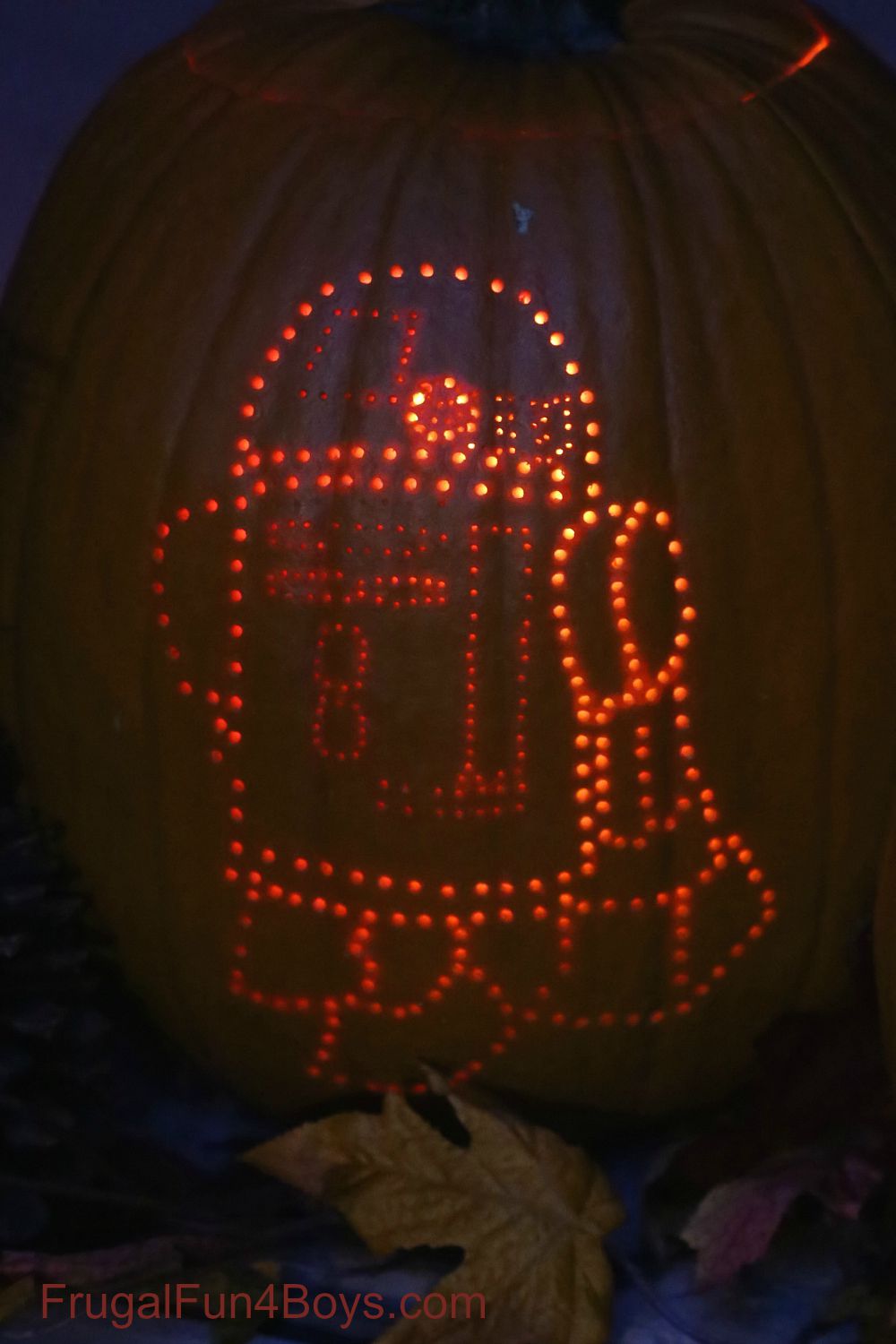 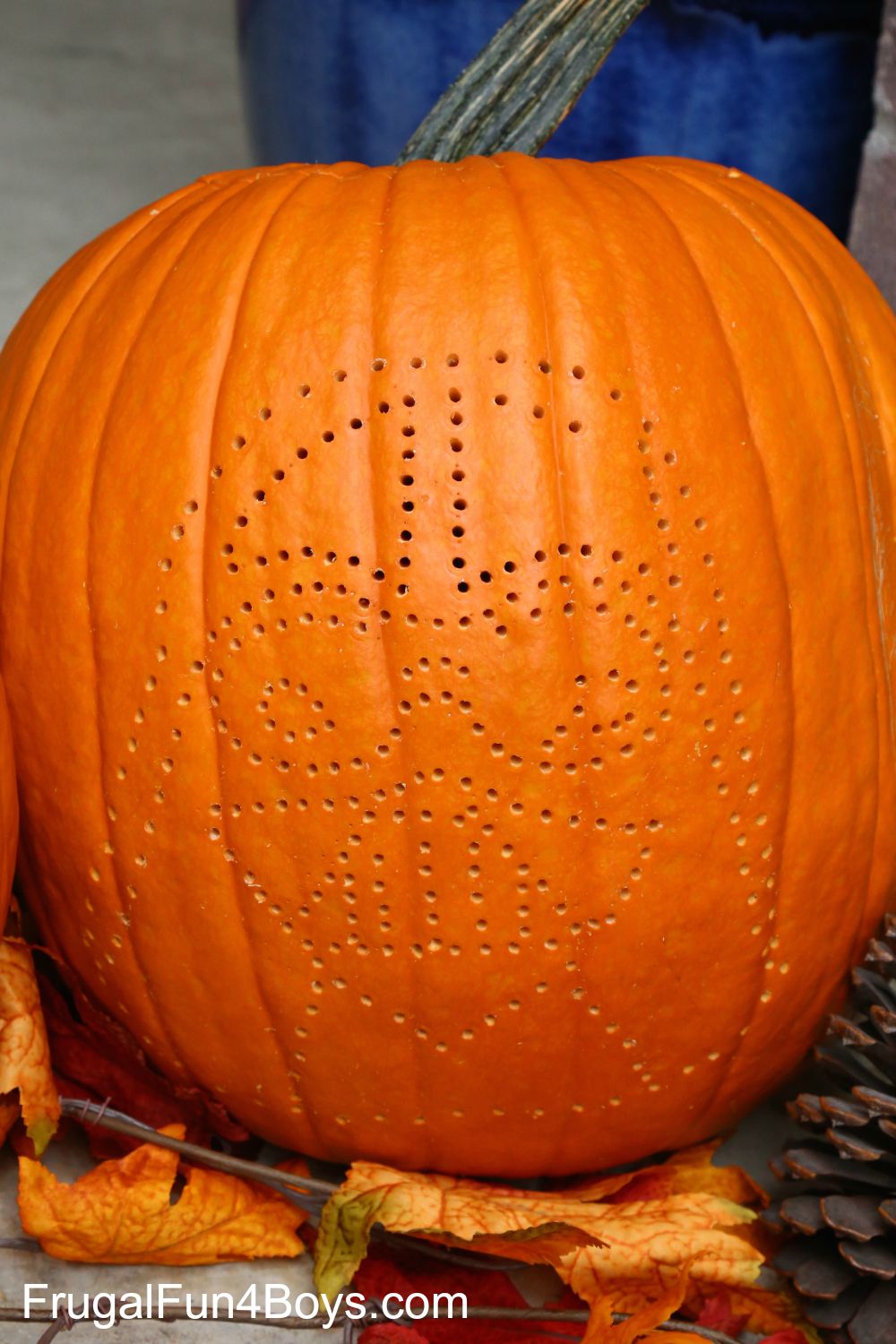 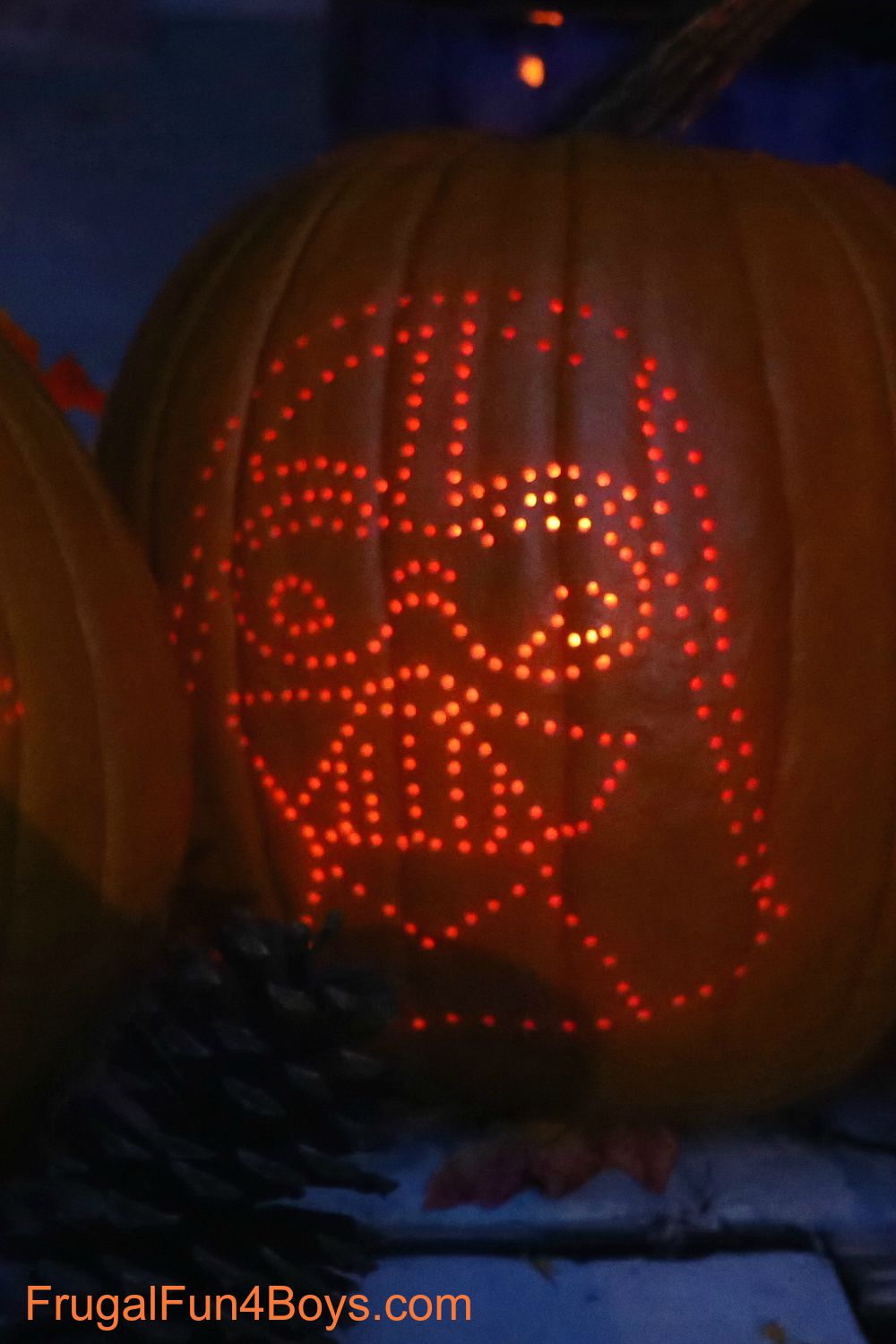 Which one will YOU make?? 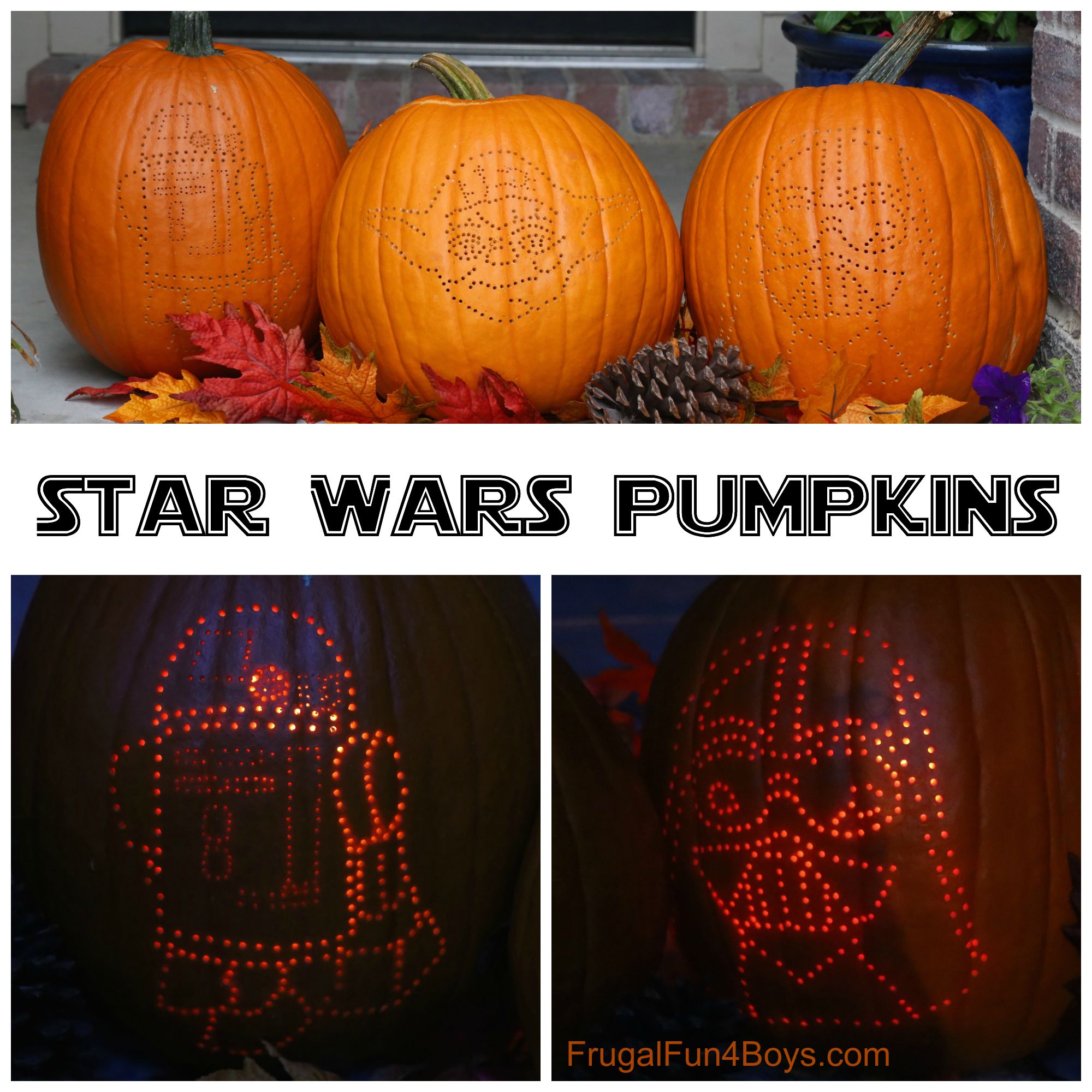