Oh my goodness. You have to try this project! This cardboard box marble labyrinth game is simple to put together, and my kids have been fighting over turns on it. In a good way, though. It has been a huge hit! 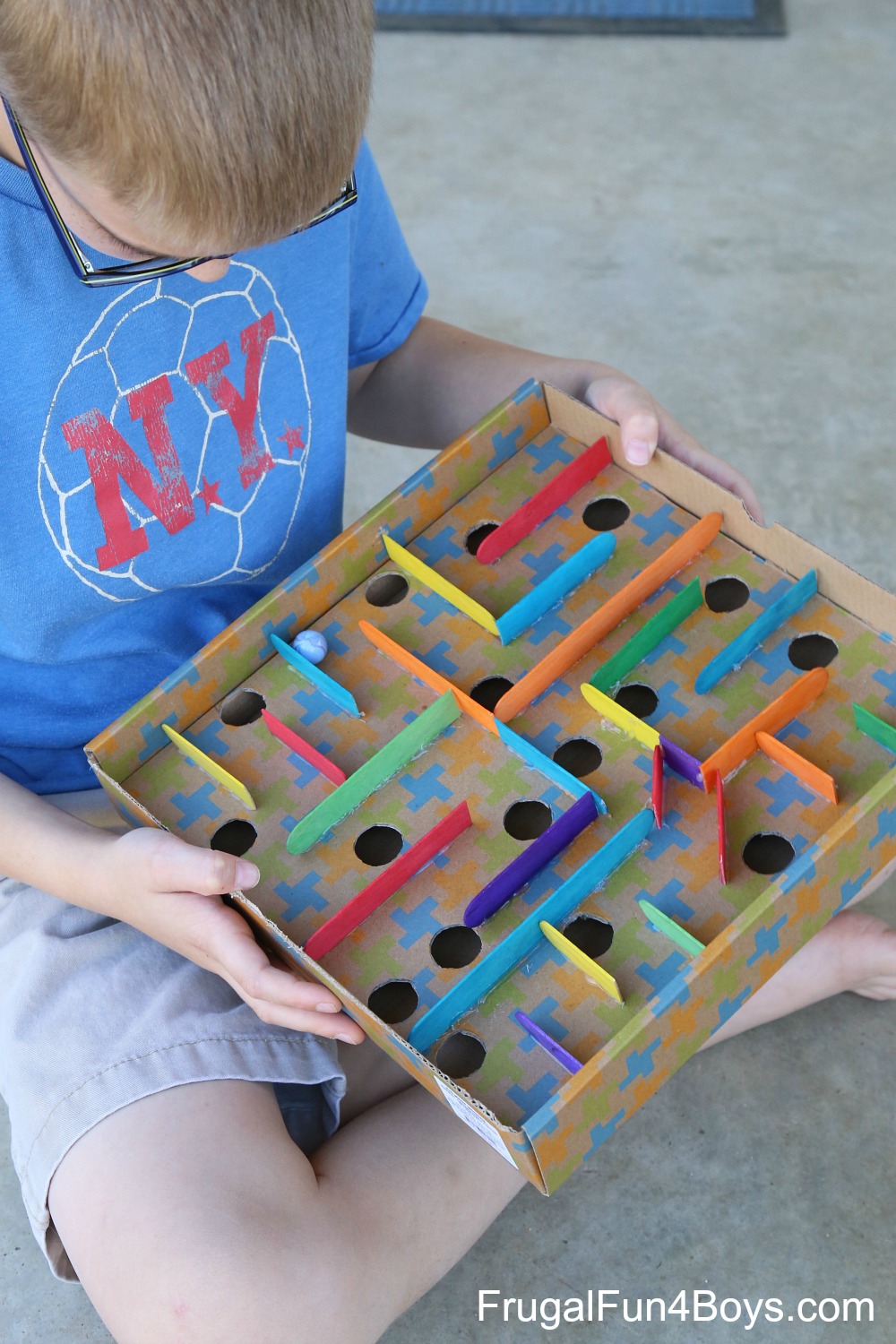 My dad has an old wooden labyrinth game that he got as a kid, and I enjoyed playing with it when I was young. If you haven’t seen one before, the idea of the game is to navigate a marble through the course without letting it drop into one of the many holes. A real labyrinth game is a wooden box that sits flat on the table, and you use a pair of knobs to tilt the surface which allows the marble to roll. It’s all about hand eye coordination! We simplified our cardboard box labyrinth by just tilting the entire thing. 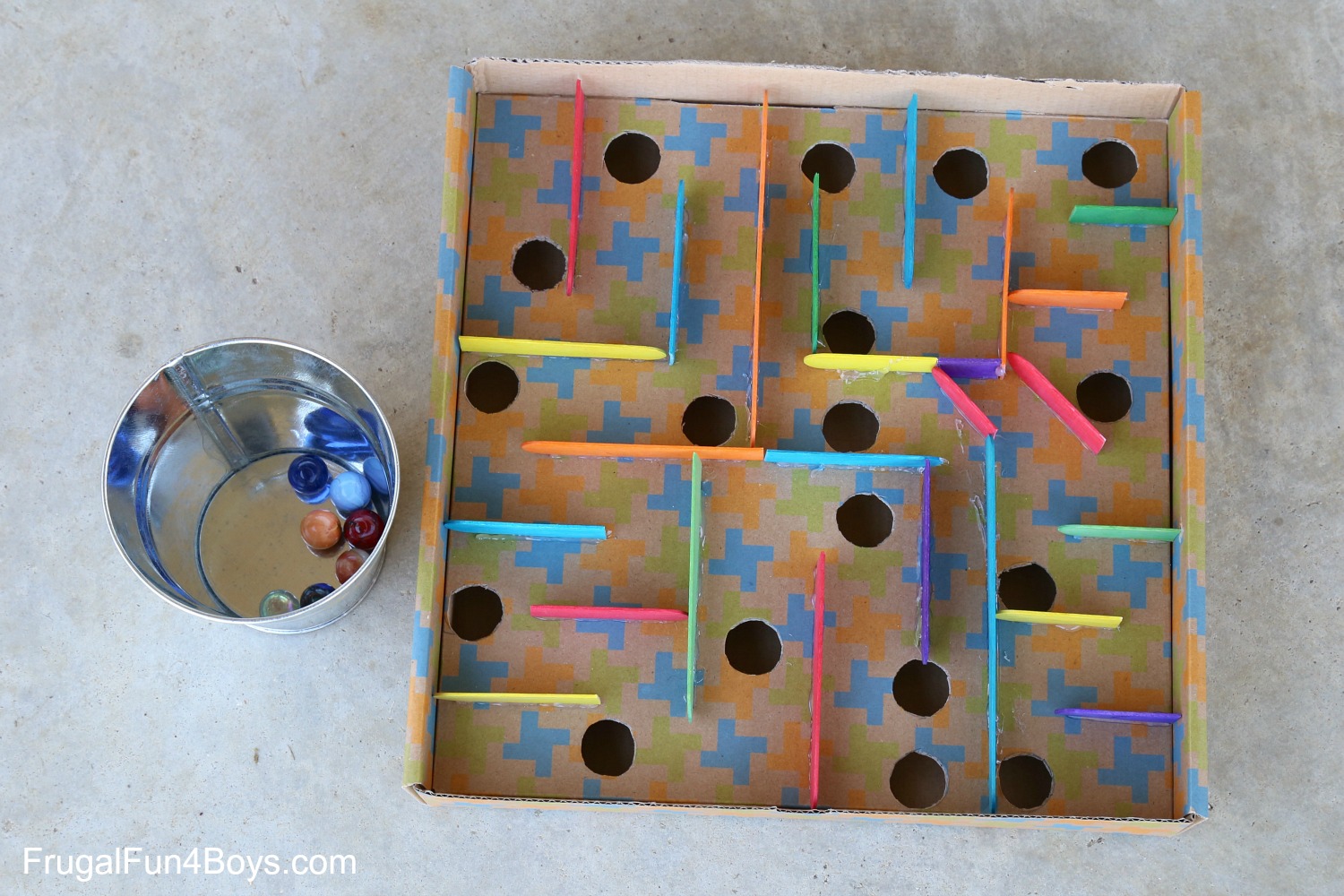 We started with a box with a lid which had held a painting set that Gresham got for his birthday. I didn’t get a picture of the box before we modified it, but it opened like a pizza box with the sides of the lid resting inside the bottom of the box.

The first thing we did was to cut the lid off and to cut a little over an inch off each of the flaps on the lid. This allowed us to put the lid back inside the box, with it now being lower in the box allowing for walls around the track. (There is a better view of this a little farther down in the post.)

Then we started making the track by cutting craft sticks and hot gluing them to the box. 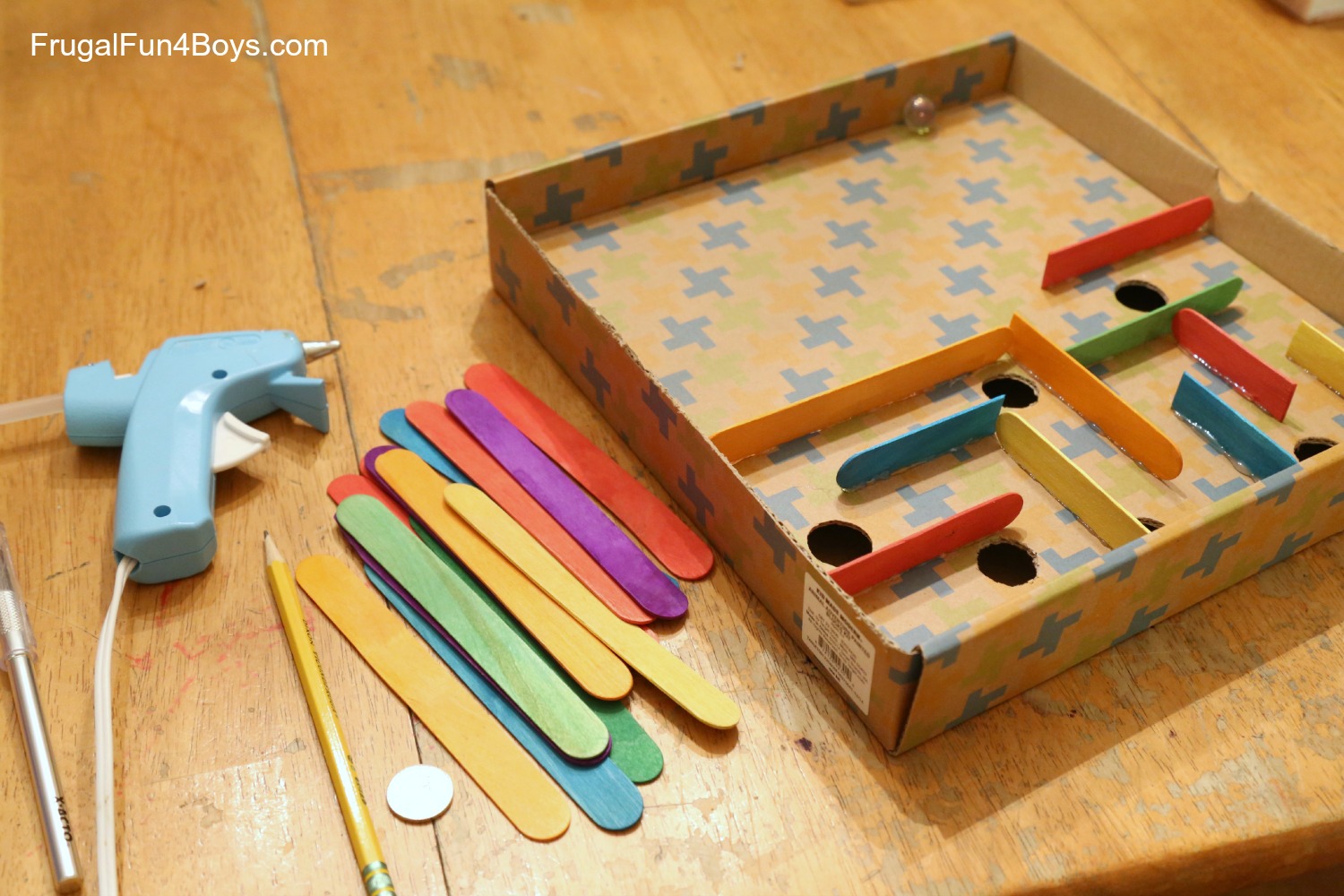 We built the track a little at a time so that we could test it out as we went. I was worried that trying to cut the holes would either create a total mess or be a real pain. But we found a great system! We traced a nickel (the perfect size) and cut out the circles with an X-Acto knife. 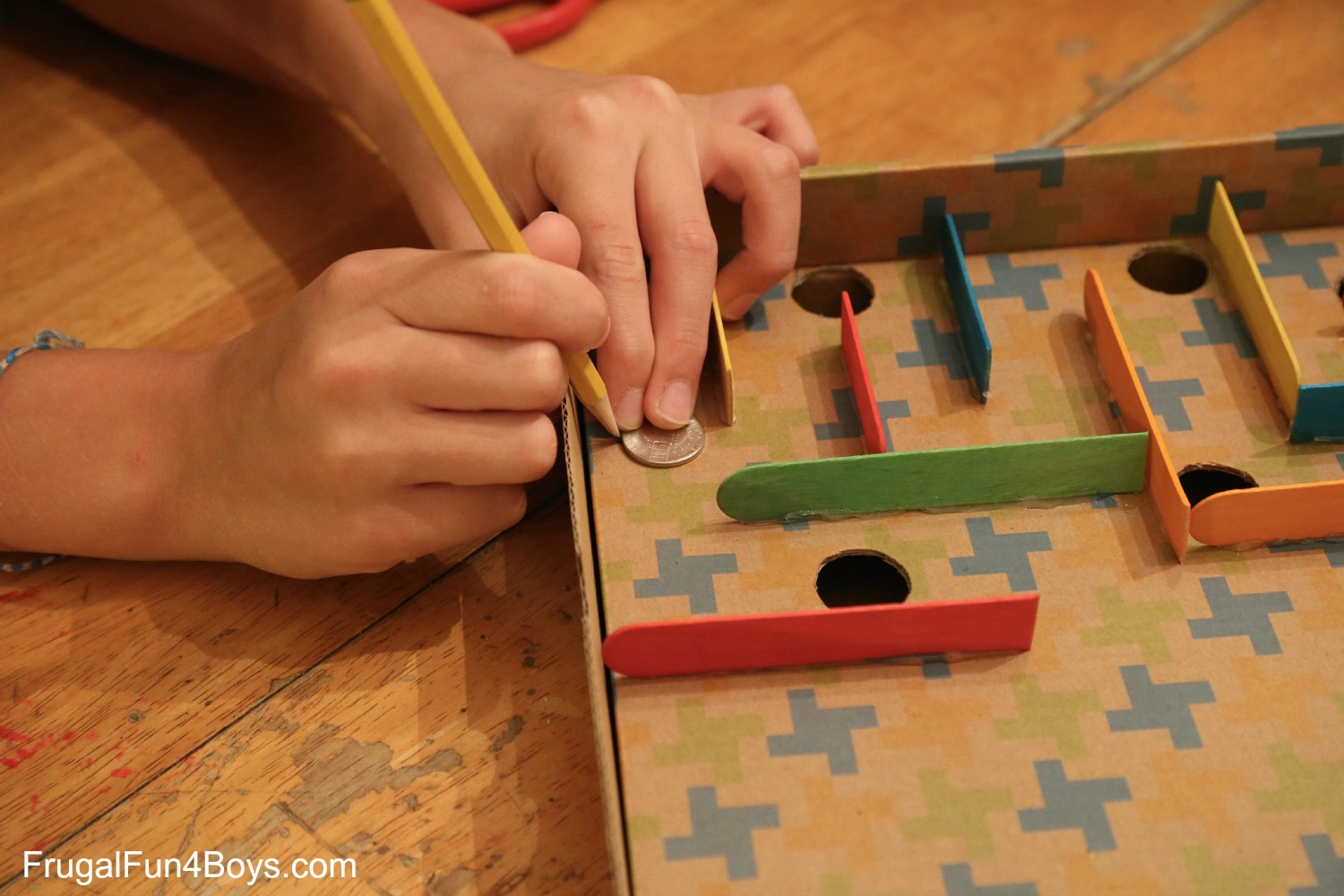 Here is the finished labyrinth. You can see how the pieces fit together in the photo below:

Note: We cut a hole in the bottom of the box in one corner so that you can easily get the marble out if it drops down one of the holes. 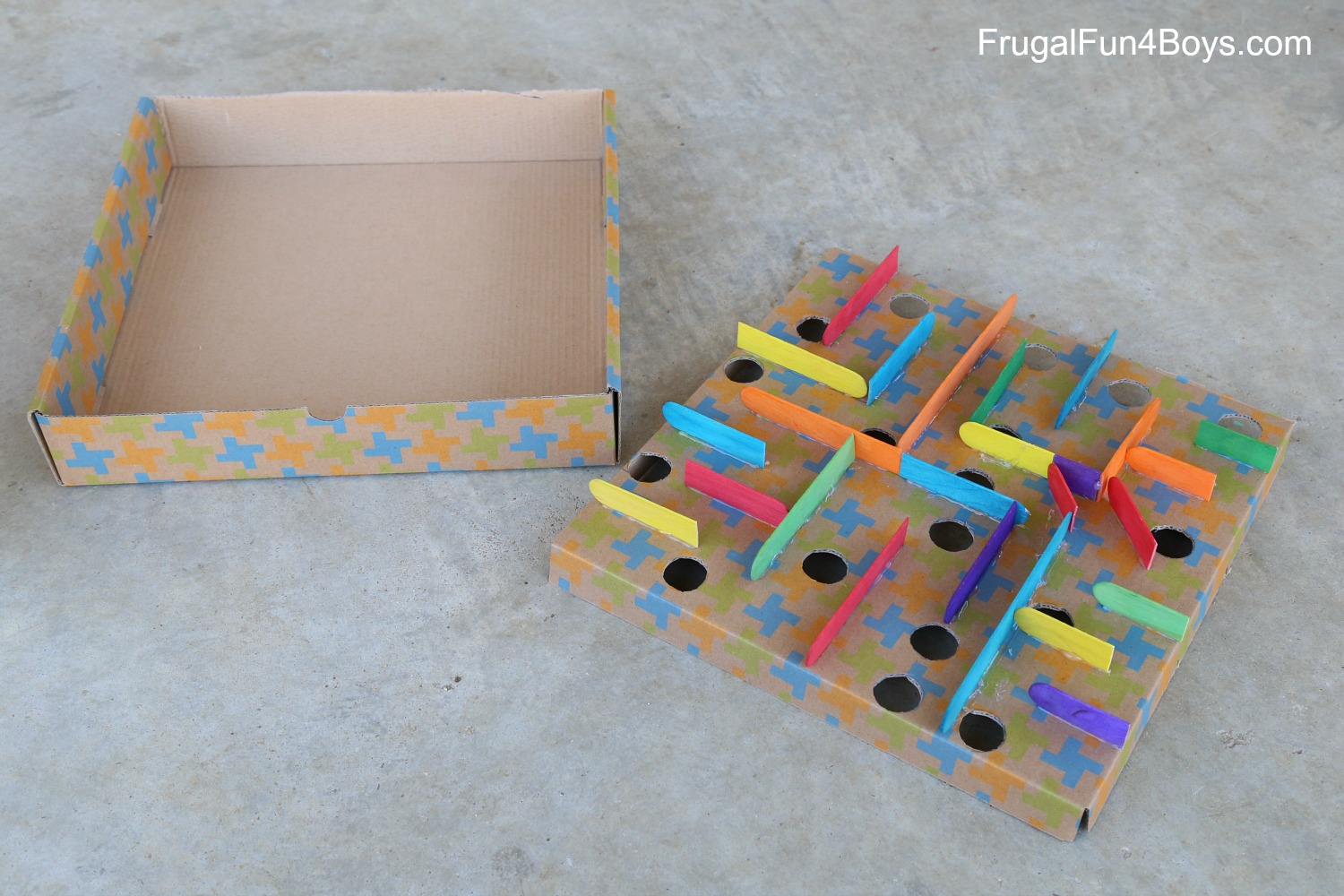 I would say that our labyrinth ended up being just about the perfect level of difficulty. None of us (even Dad and I) were able to master it the first time, or the second or the third! But it’s the kind of game where you just want to keep trying, and our 12 and 9 year olds were able to eventually get to the end without any level of frustration. 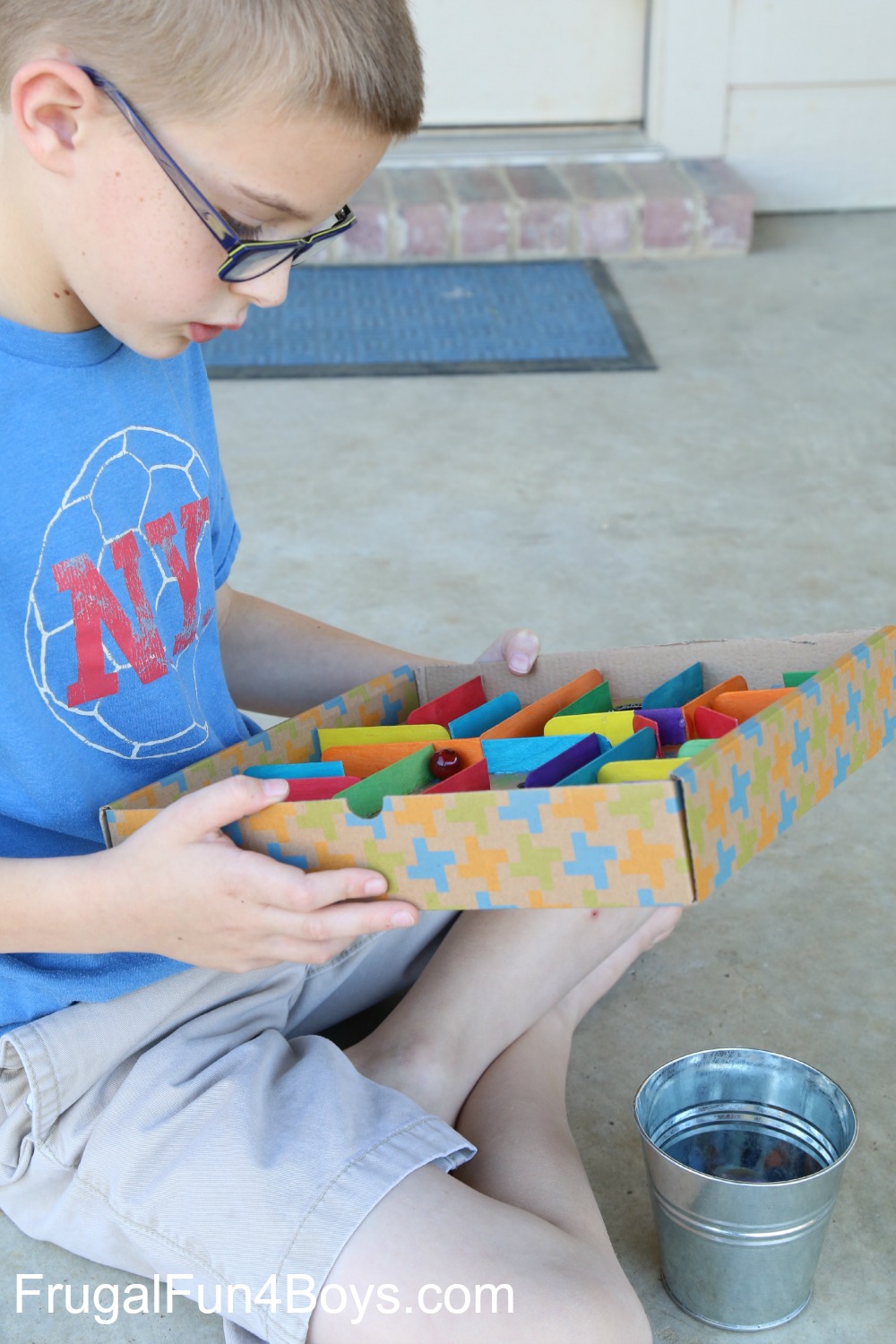 Make it a class challenge!

This project is so open-ended and a perfect engineering activity for kids. After making this with my boys, here are my suggestions for doing this with a class.