This week, we have been exploring the mathematics of music with a homemade PVC pipe xylophone! This was one of those projects that sort of evolved. The boys have been enjoying blowing into PVC pipe and making all kinds of crazy noises. They have noticed that longer pipes make a lower noise than shorter pipes. We decided to try making some instruments with different lengths of pipe to make different notes, BUT we discovered that the pitch changes when you blow harder or softer on the same size pipe.

After a little googling, I found these awesome instruments that people make out of PVC pipe and play with some type of mallet, such as a foam bat. Striking the pipe gives a consistent pitch (as opposed to blowing into the pipe, which didn’t). Blowing across the pipe would probably give a consistent pitch, but with the ages we have, we are not that coordinated!

I started out with five pipes – C (below middle C), E, G, C, D. They sounded good together, but we couldn’t play them unless someone was holding them up. And since none of us have five hands, we had to assemble a few “someones” and get them to stand still and hold the pipes…not too practical! If you set the pipe directly on the ground so that the open bottom of the pipe touches the ground, it changes the pitch. So we needed some type of stand. Since we were going to the trouble of making the stand, I went back to Lowe’s for more pipe and made an 8 octave scale. My scale did not turn out to be a C major scale although it sounds great – more on that in a minute! 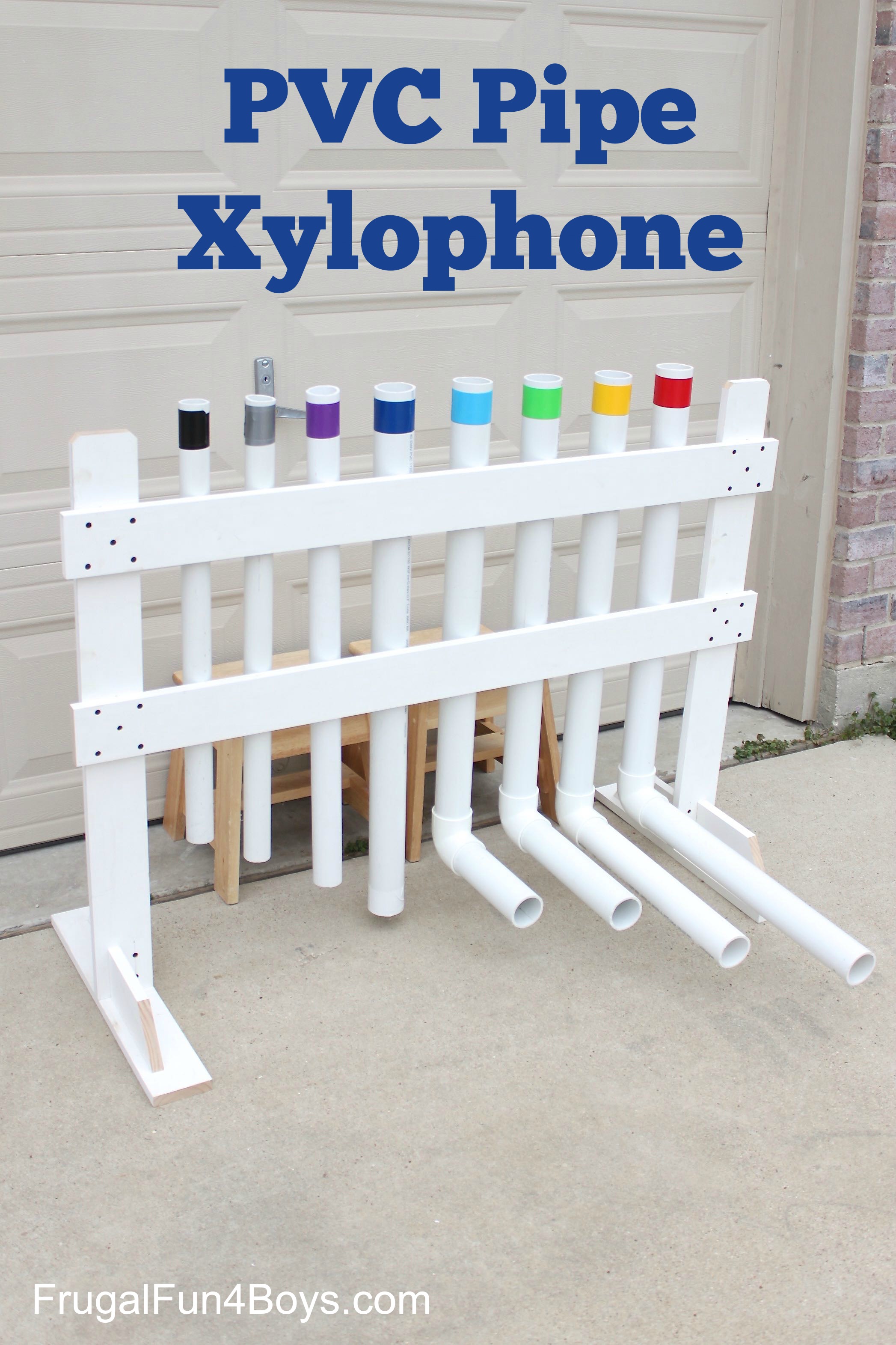 One of the Youtube videos that I watched recommended playing the PVC xylophone with cheap rubber flip flops as mallets. We didn’t have any flip flops on hand, so I used a fly swatter. I cut out a piece of sticky-back craft foam the same size as the swatter and covered it with that. The foam eliminates the noise of the fly swatter hitting the pipe. Anything hard used as a mallet will add its own sound to the instrument as the plastic strikes the pipe. The foam covered fly swatter ended up being PERFECT! 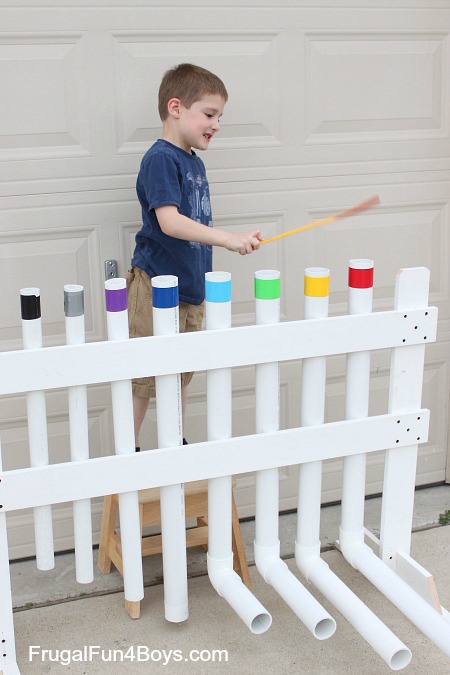 (If you have a child who does Suzuki music lessons, you will recognize our tunes!)

Want to build one? Even if you don’t have the patience, musical ear, or desire to create exact musical notes, it’s still SUPER fun to cut pipes of different lengths and compare the sounds. Your kids will love exploring with this. Add in some other junk instruments (trash can lids, etc.) and create a whole percussion section!

If you want to create a musical scale, keep reading.

If you don’t care about having a certain scale, feel free to use the lengths that I created. It’s a working scale, it’s just not perfectly in tune with a piano.

The notes are listed from lowest to highest.

This is our mallet. As soon as I find another fly swatter like this (it was a freebie!) I will be making a second one. 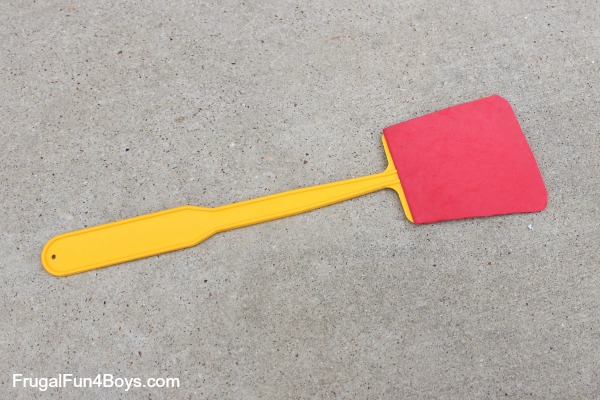 I cannot take any credit for this frame! My dad and a friend who was visiting from out of town built and assembled the frame. The design that they came up with is very simple, as lightweight as you can get with something like this, and sturdy. 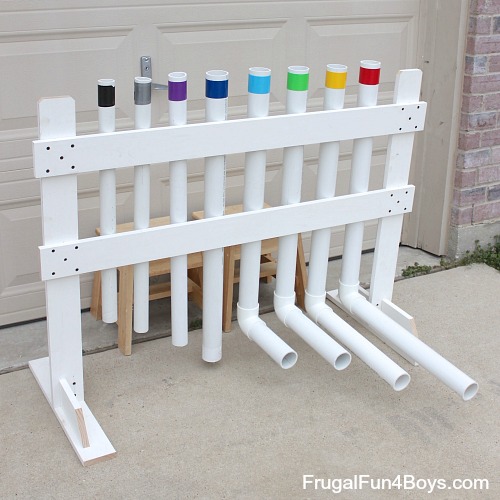 The pipes are attached with metal brackets that I bought in the plumbing aisle for 58 cents each. 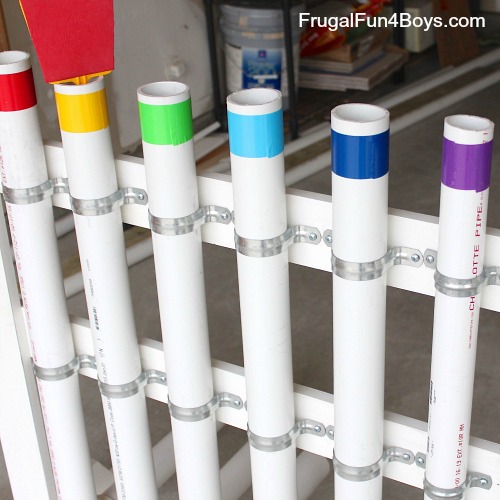 Here’s a better view of the frame from the side: 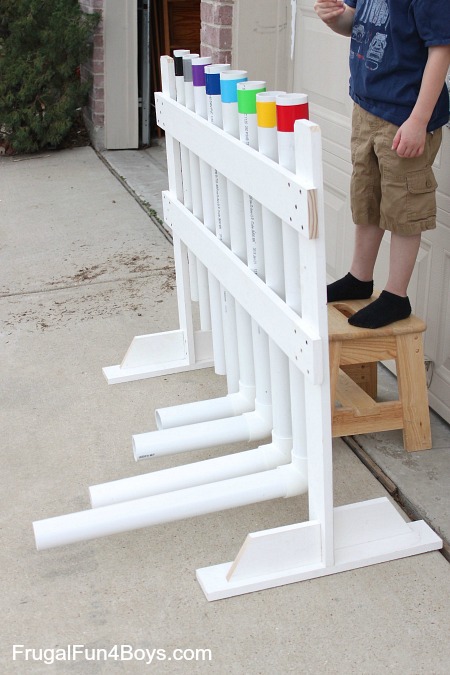 We have all had so much fun exploring our new instrument, and I’m planning to use it for homeschool groups, etc.

This is our fourth post in the STEAM Power blog series – Science, Technology, Engineering, Art, and Math activities for kids.

Be sure to stop by the other posts in this series!

Secret Code Activity from What Do We Do All Day?

Easy Math Trick for Kids from All for the Boys