Move over plastic workbenches! This workbench is perfect for kids, but it’s not merely a toy. It’s a fully functional workbench with real tools – all on a kid-sized scale.

My dad created this workbench for the boys, and he was kind enough to type up building plans which you can download at the bottom of this post. He created the design to be simple (a minimum number of cuts, etc.) and the supply list is efficient. For example, you can cut all four legs from one board.

Of all the boys, Jonathan (5) loves tools the most. The two oldest boys went together to give him a toolbox for Christmas, which started this whole project.

The toolbox was a huge hit! They picked out a basic toolbox at Walmart. I think they spent about $16 total to give him the toolbox, two screwdrivers, a small (but real) hammer, and a measuring tape. Then we ordered a hand drill for him on Amazon – it’s the tool in the box that says Fiskars on it. It’s a real working drill that you operate by turning a handle – just like an old fashioned one! 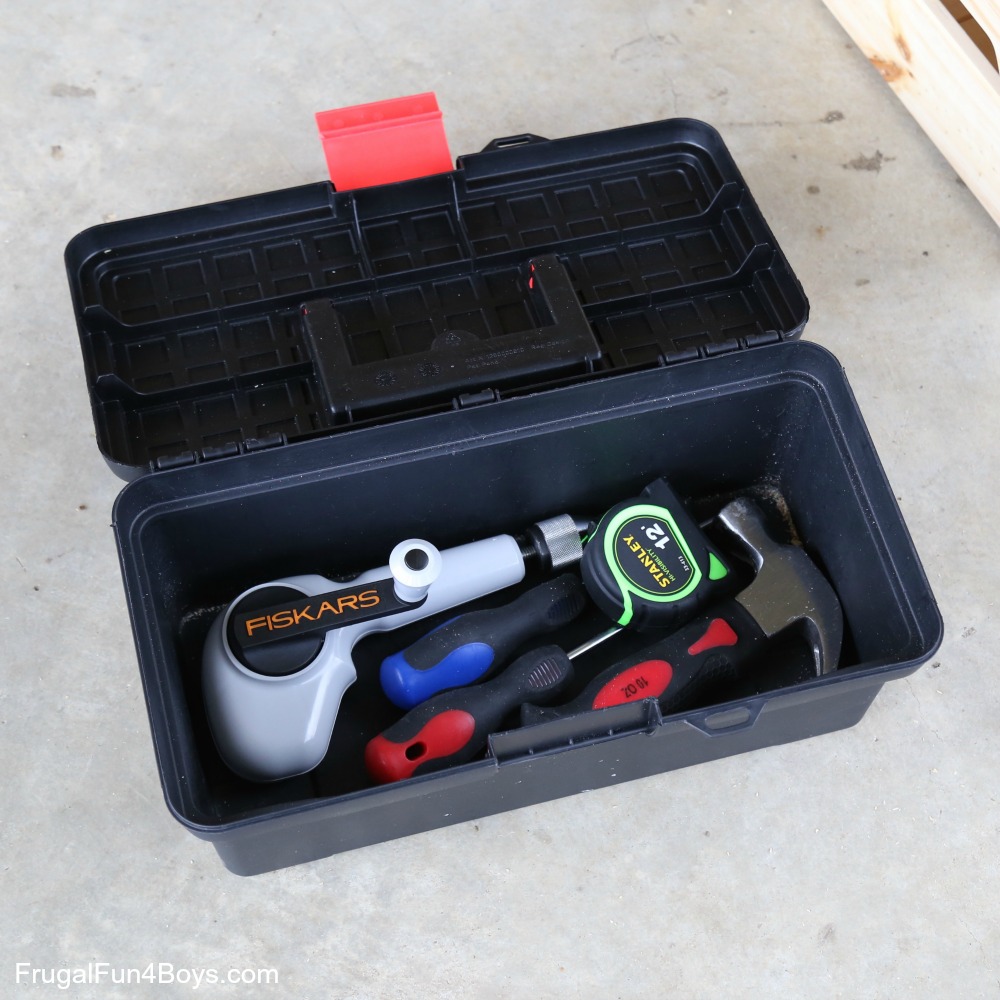 We made the workbench 25 inches tall (well, 24.75 to be exact), which is perfect for both Owen and Jonathan (ages 7 and 5). Make yours taller by using longer legs. Also, the table can easily be taken apart so that you can replace the legs with longer legs as kids grow.

The little red bins are for holding nails, wood screws, and sandpaper. I found them in packs of 6 at Home Depot. The crate underneath the table has scrap wood for the boys to use.

You could easily add pegboard to the back of the tool bench to hold tools. We chose not to since we are storing this outside. Jonathan brings his tool box inside when he is not using it. We don’t want the tools to rust. 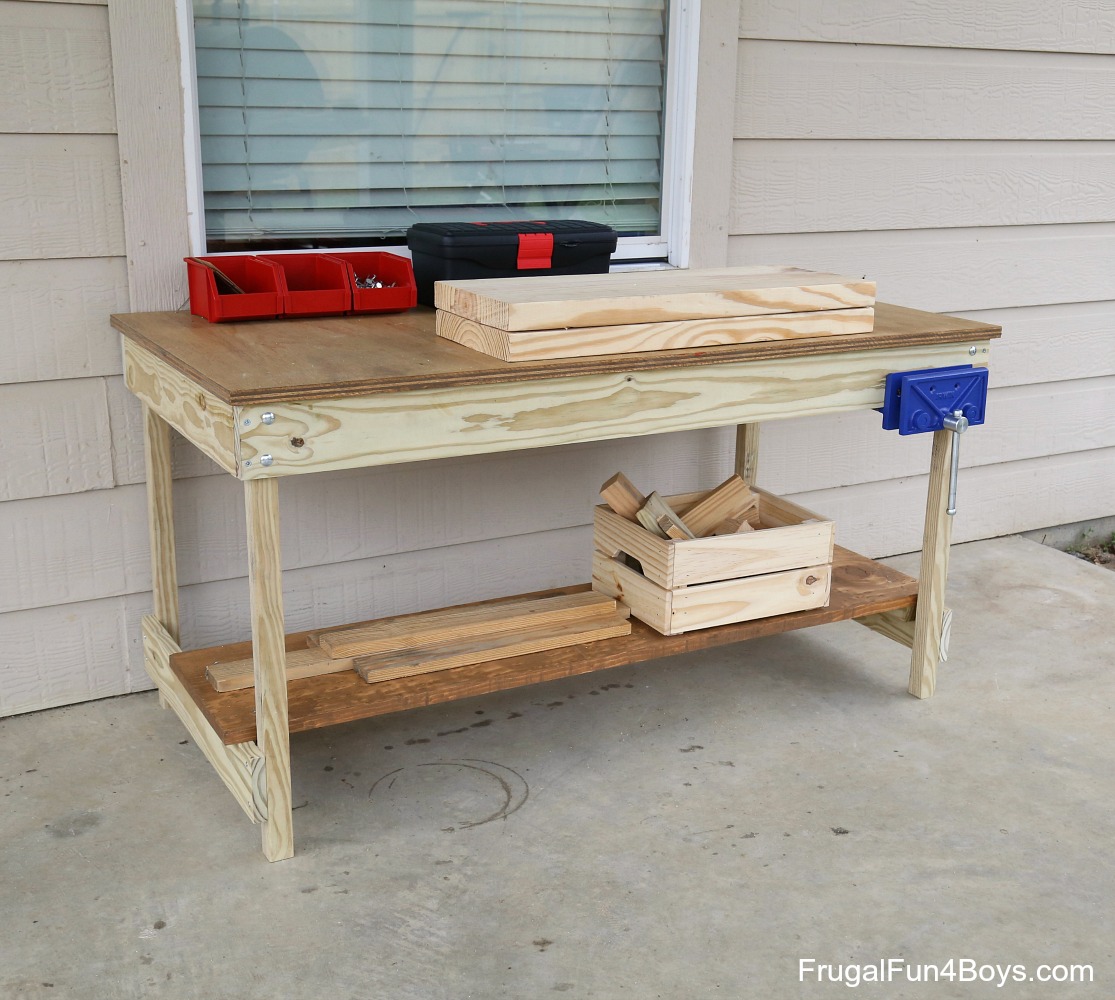 We had some scrap wood in the garage, and my husband showed Jonathan how to drill holes and then use his screwdriver to insert a screw into the hole. Lots of fun! Later we’ll progress to actually building things, but for now it’s just fun to practice using the tools.

The boards shown are two 8 x 2 boards cut in two foot sections, then nailed together. We didn’t want the kids to drill or nail on the actual surface of the workbench! That is a big no-no! 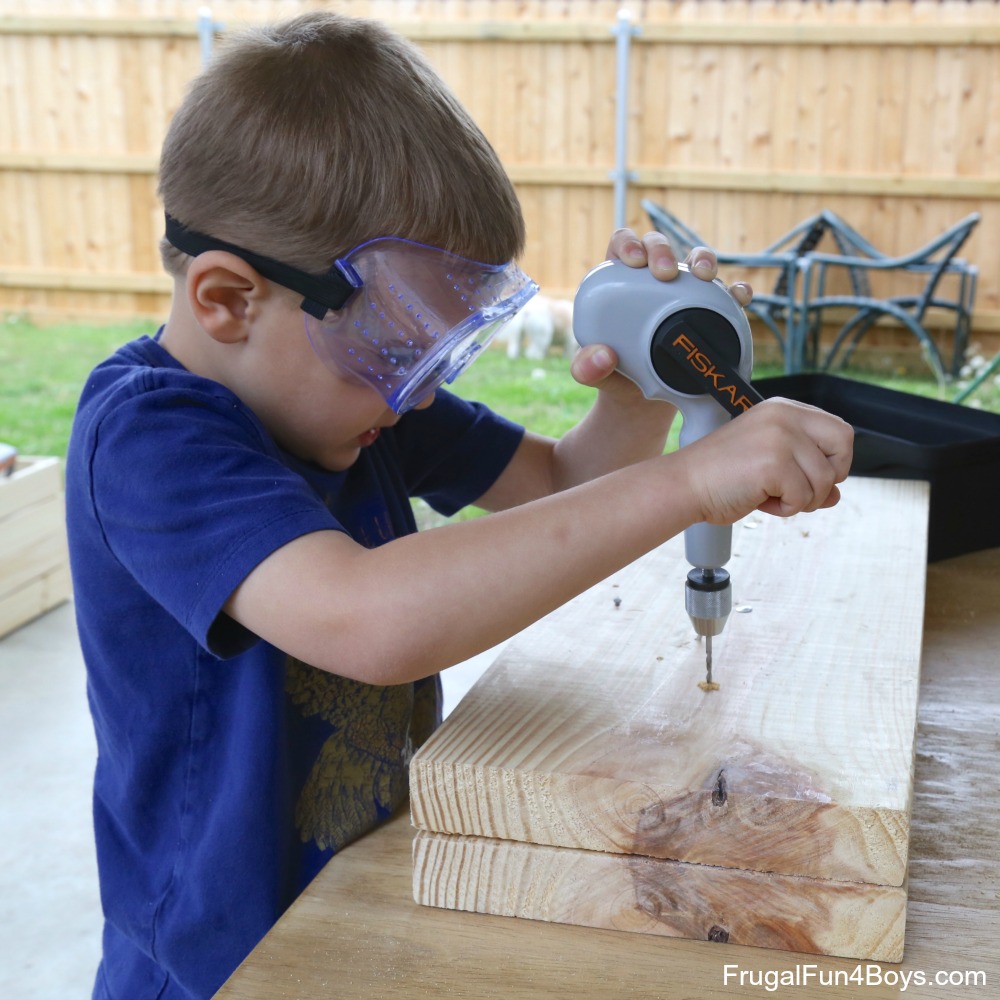 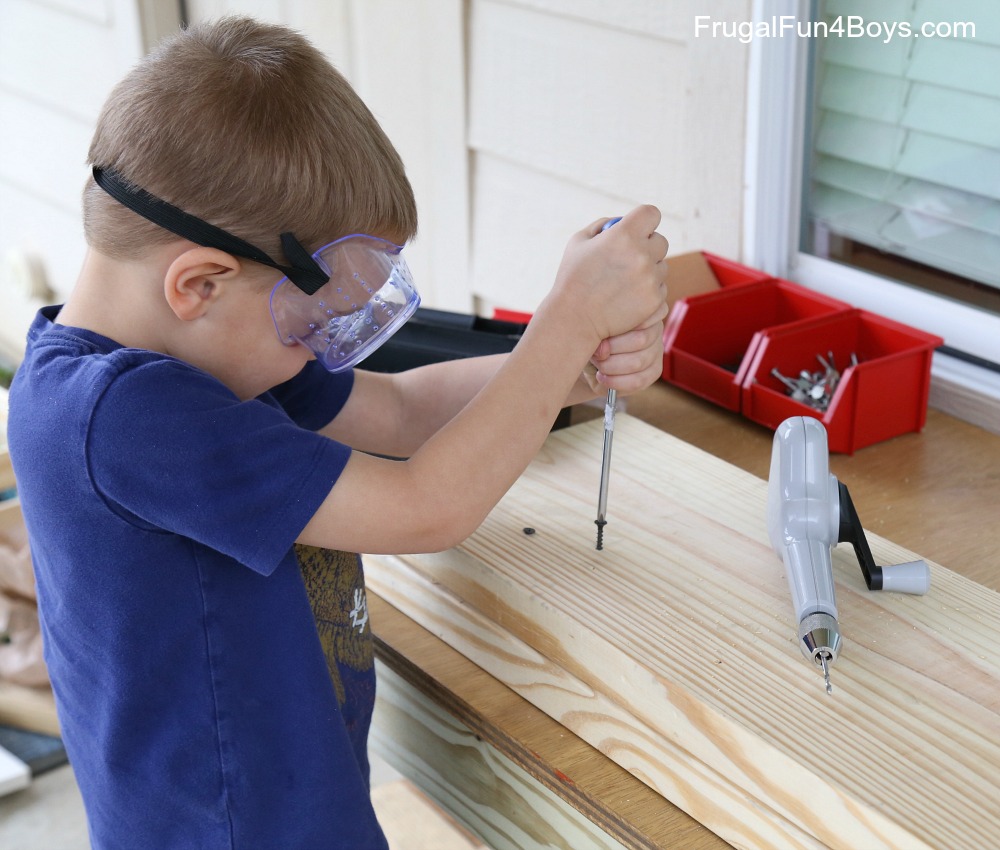 My husband cut a 2 x 2 board into several small pieces, and I showed Jonathan how to sand the rough edges and make them smooth. He thought that was really neat! 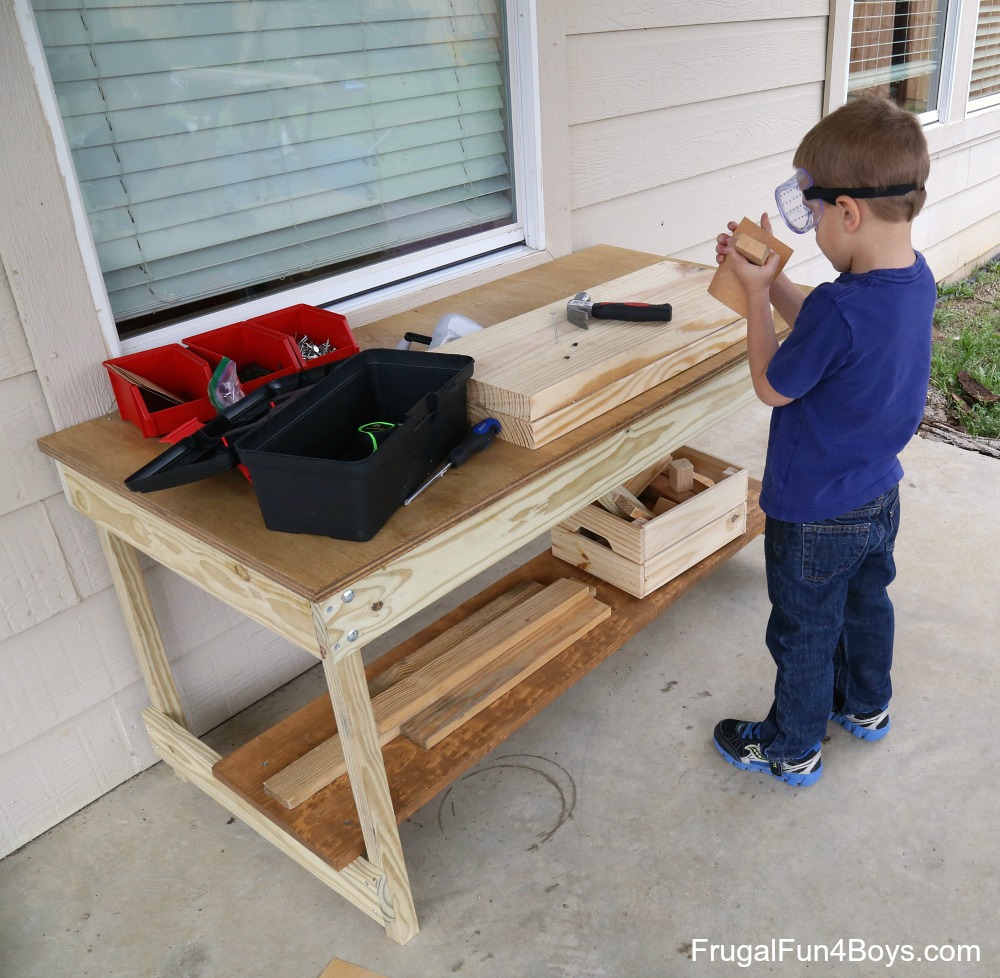 Hammering nails is a good skill to have, so I’m happy for the boys to practice. Yes, they might hammer their fingers once or twice but that is how you learn! We bought some nails with large heads for them to start with. The only down side ended up being that the larger (thicker) nails take more effort to drive into the board. Skinny nails are easier to hammer, but they often have a tiny head that can be hard for a younger child to hit.

Make sure to get plenty of nails – here is what our nailing board looks like after a couple weeks! 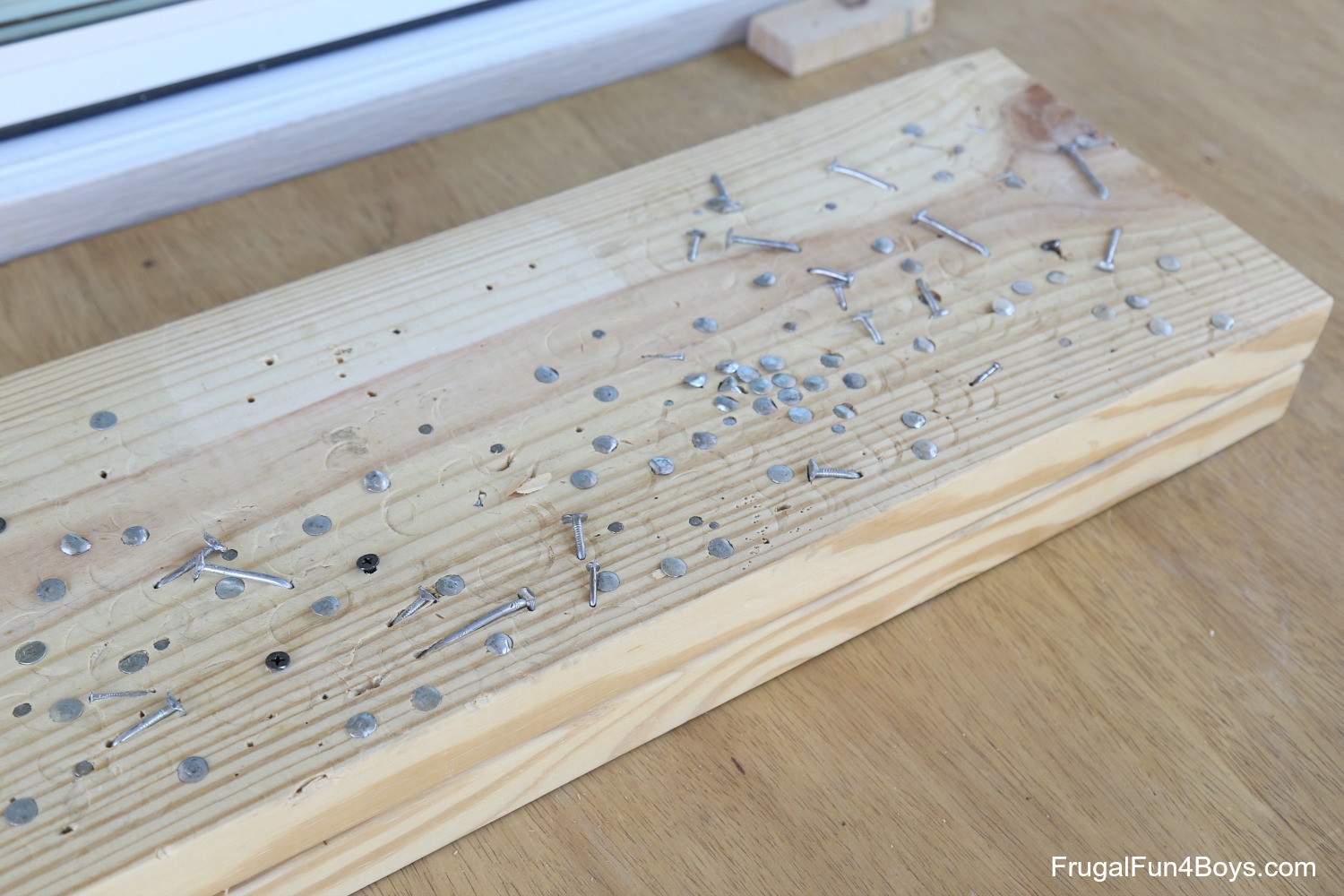 Then keep scrolling for some photos of the steps.

The workbench cost us about $60 to build. You could reduce your costs by using non-pressure treated wood. We chose to go with pressure treated wood (except for the top, which is sanded plywood) because our workbench is on our back porch. It’s a covered porch, but rain still blows in if there is a good storm. 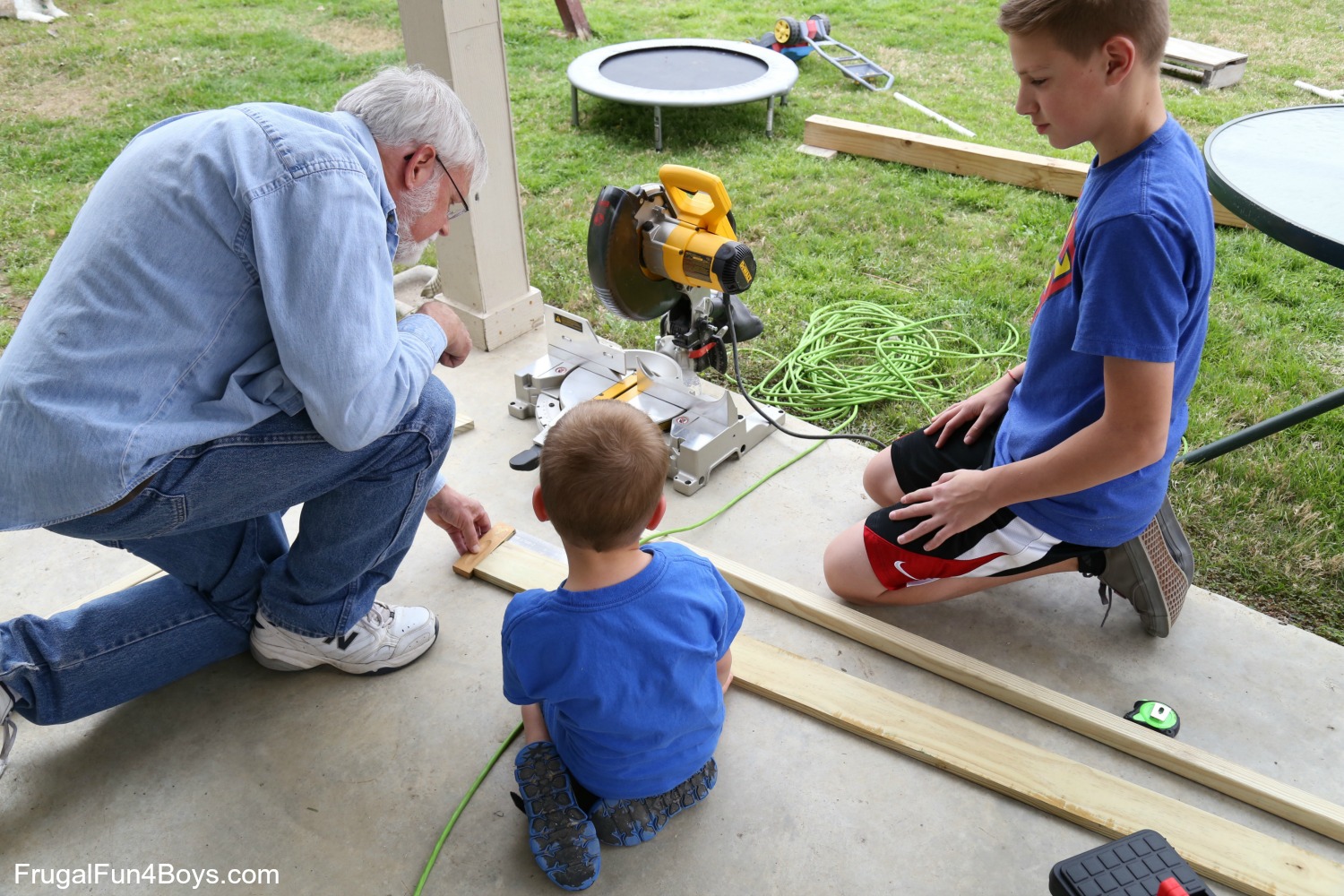 Use wood screws to attach the four pieces of the frame. 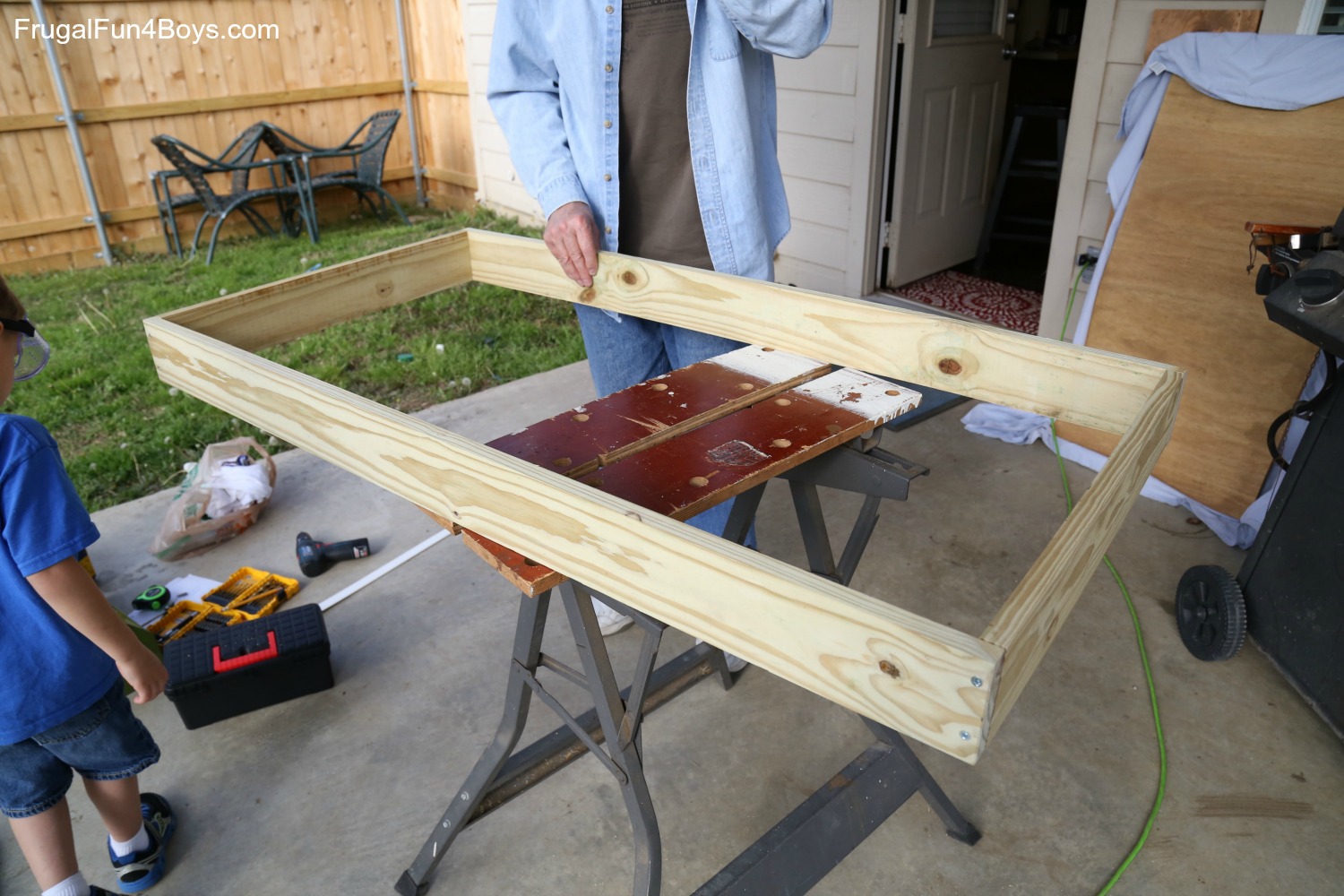 Attach the legs to the frame.

My dad used carriage bolts to attach the legs. The legs can be easily removed if needed. 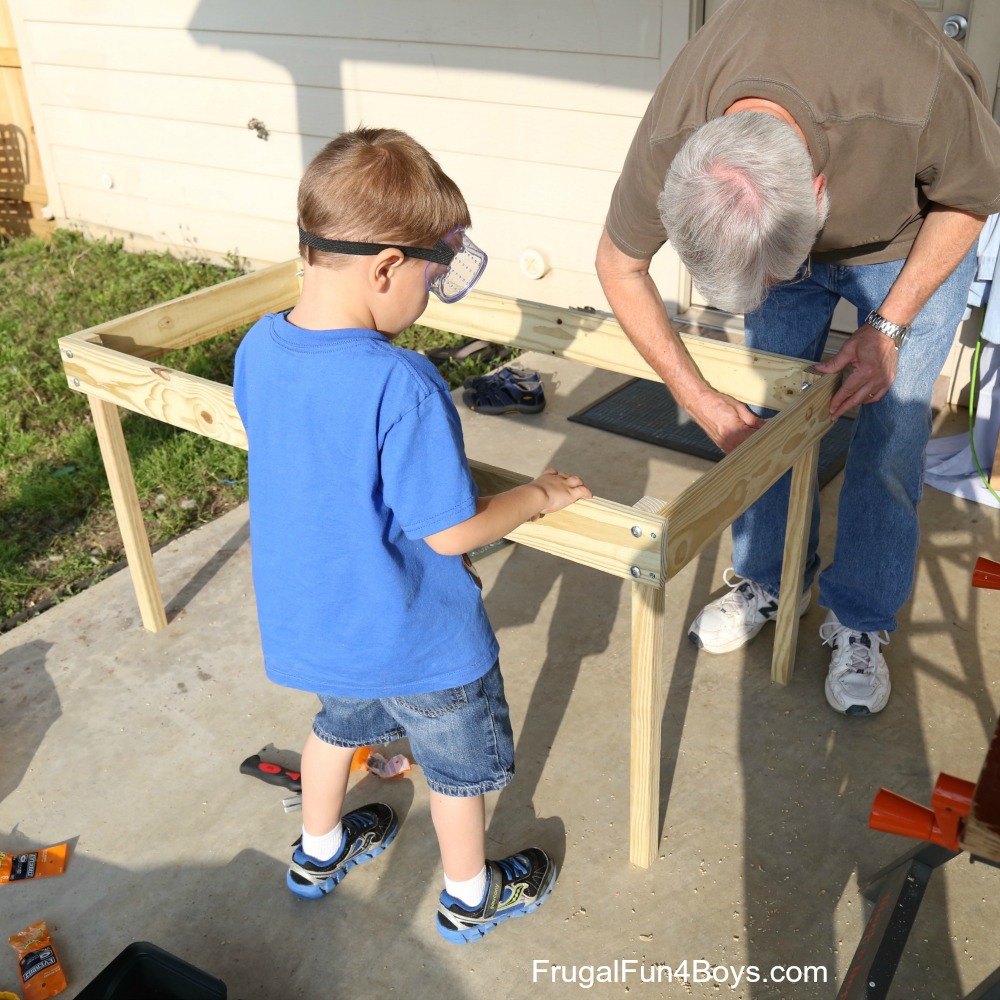 Attach brackets to the frame to hold the top of the workbench. 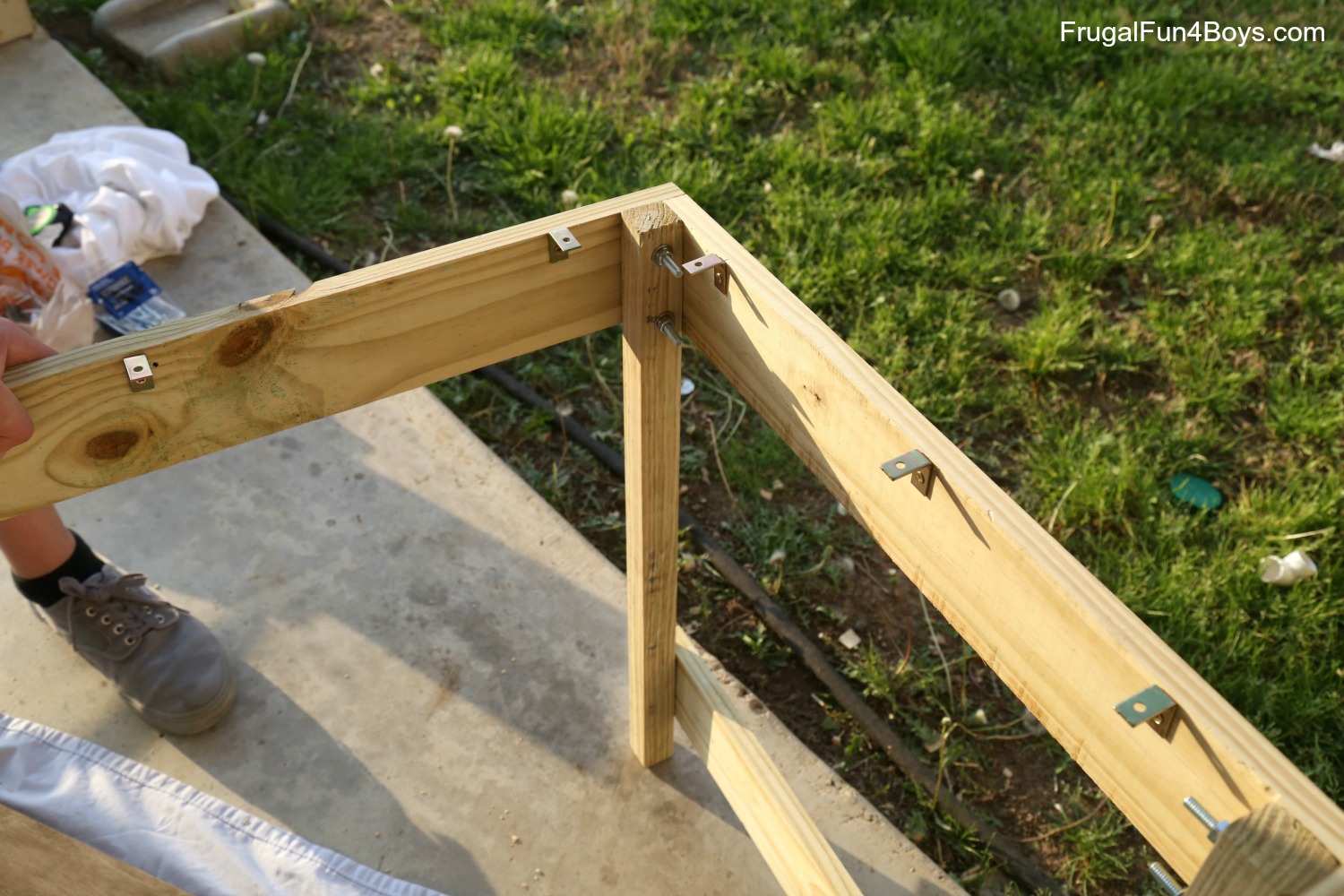 My dad and Aidan turned the table upside down and then screwed on the top. If you don’t want to use brackets, you could easily glue the table to the top of the frame with wood glue. 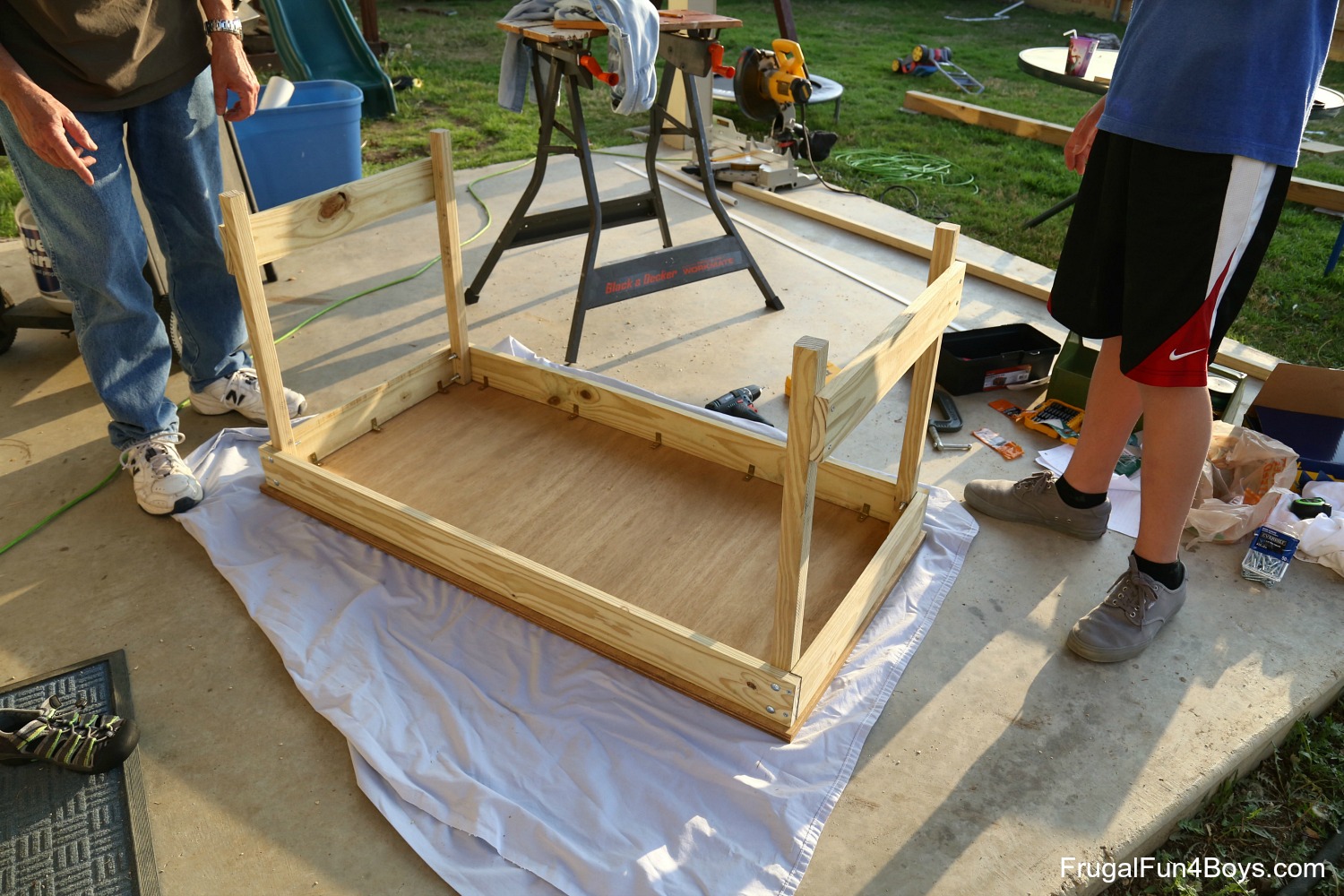 This photo shows the shelf. The shelf is not permanently attached – it has a board attached to the underside on each end to keep it in place. 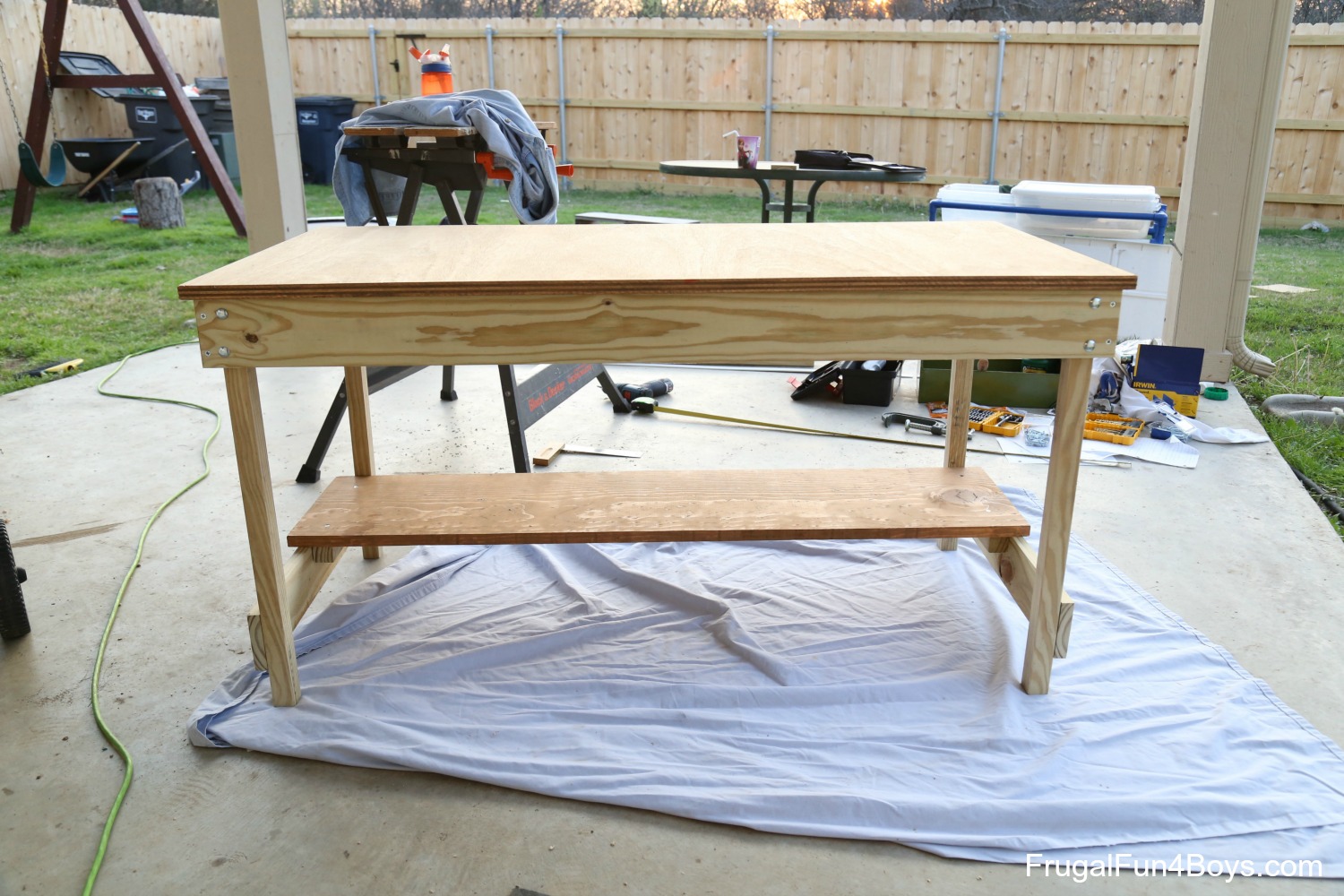 My dad added the vice to the front of the workbench for holding boards still while sawing them. The younger boys are too young for the saw, but Aidan has already used it! It’s very handy to have. 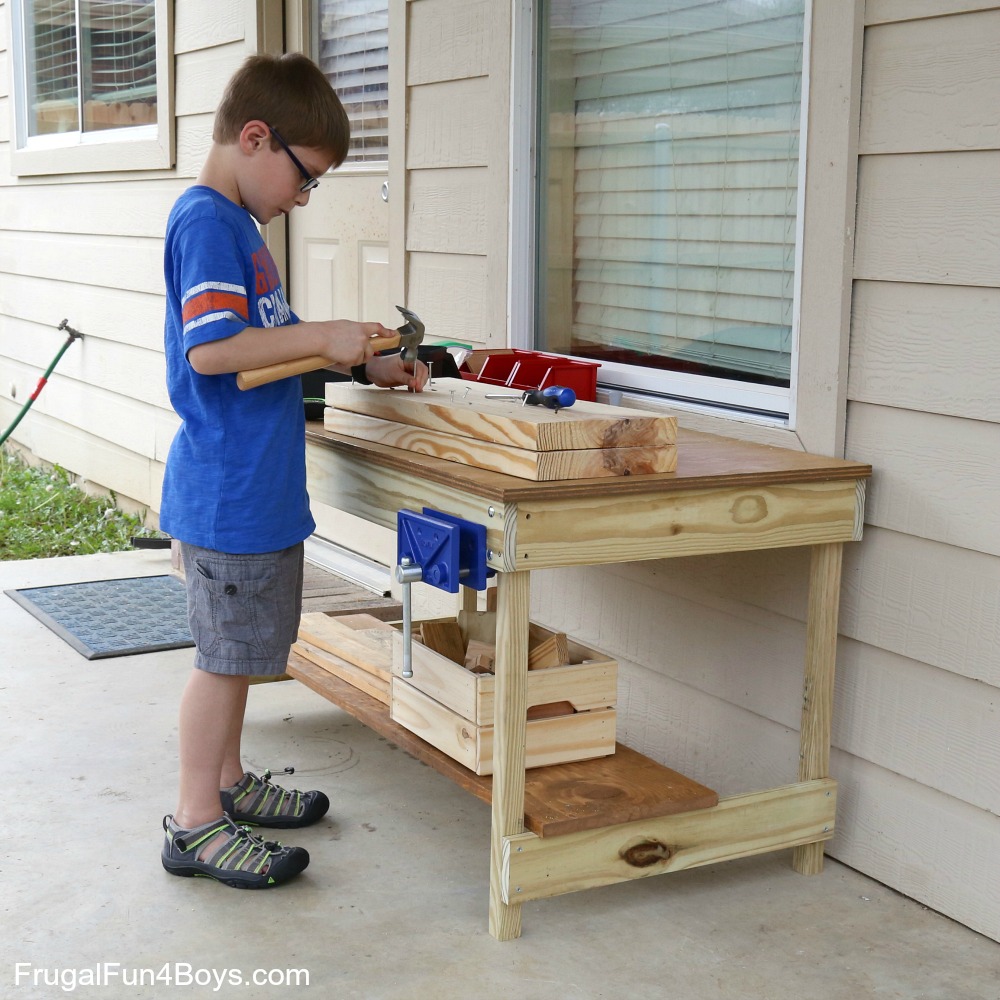 When you click the link above, the document will open in a new window. Then simply print from your browser! 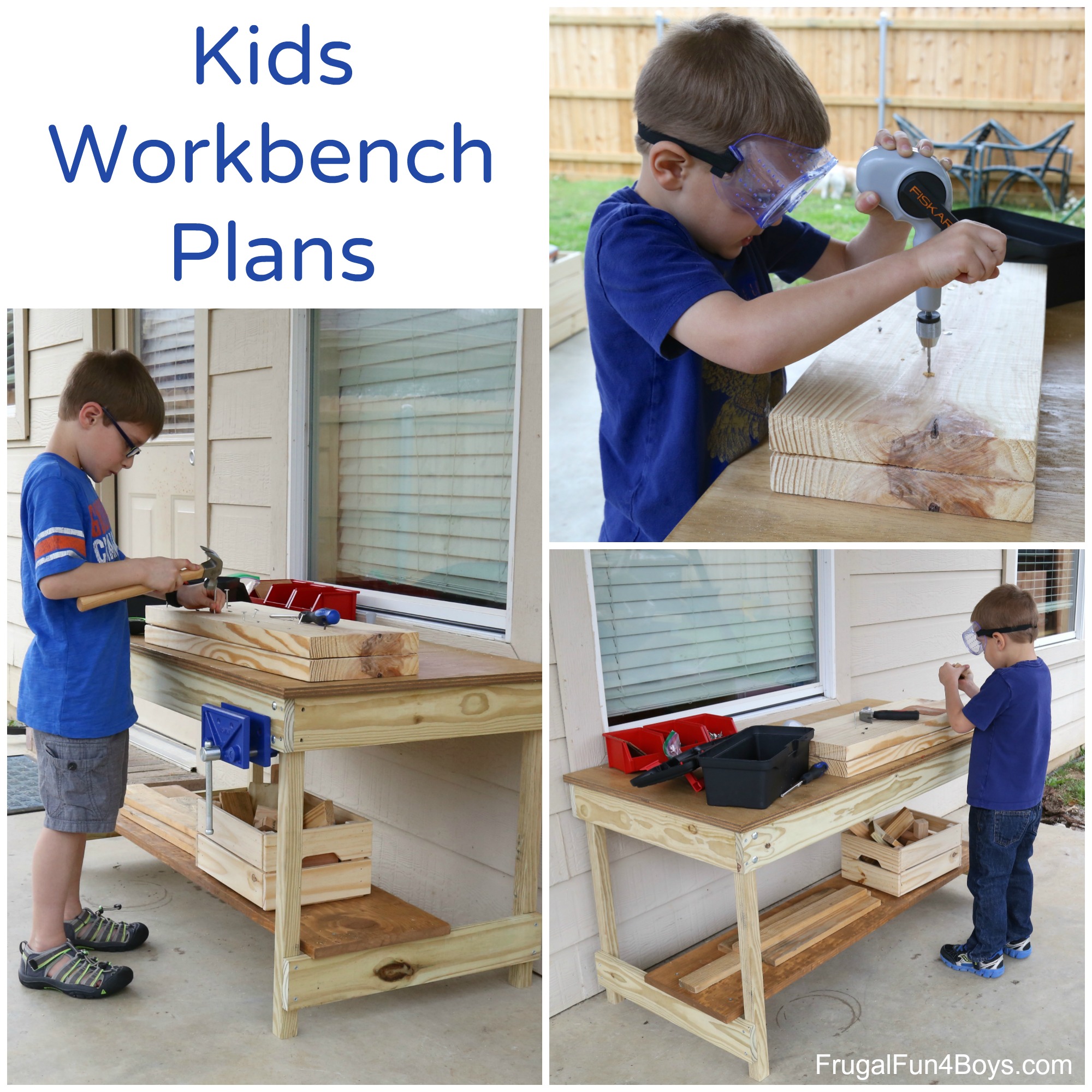