For Christmas this year, we gave the boys a hatchling box turtle. We are studying land animals this year with Exploring Creation with Zoology Vol. 3 from Apologia (Amazon Affiliate link). I cannot say enough good things about this curriculum and its rich content! If you are looking for a science program that you can do with different age children at one time, this is it. My boys love science and don’t really consider it “school.”

Anyway, the book recommends keeping a pet turtle, and back in September, I decided to go for it. I really wanted a box turtle because I didn’t want to mess with an aquarium with a pump and all that. However, we had trouble finding one to purchase! It is against the law to sell baby turtles that are smaller than 4 inches, and box turtles in general are hard to find. I was thrilled when a friend from college who raises box turtles and tortoises had a baby box turtle hatch in November, and she was happy to give him to us!

This week, we arrived at the turtle chapter in our science book, so I planned some turtle activities for Owen (age 3) as well. Well on the first day of our turtle unit, our little box turtle died! At first I wasn’t sure if he was just hibernating, and while doing some online reading about that, I discovered that we most likely had the wrong UV bulb for our turtle’s habitat. Before we brought the turtle home, the people who gave him to us told us to get a heat lamp and a UVB lamp. Well, the pet store gave me a bulb that said “full spectrum,” but did not contain UVB! Turtles need UVB for growing strong shells and bones, and our poor turtle probably died of metabolic bone disease. It makes sense – he was eating well and moving around when we got him, but he became less active and quit eating after the first week or so. We attributed it to it being winter, but it was probably his health.

Since we were just starting our turtle unit, I went ahead and bought the boys a Russian tortoise this week. He is much bigger (and older) than the box turtle, and will hopefully be stronger and hardier! He is already eating well, so that is good. And, he can use the same habitat, at least for now. He is just over 4 inches now, and should grow to about 8 inches over the next 3 years.

The boys named him Frodo. 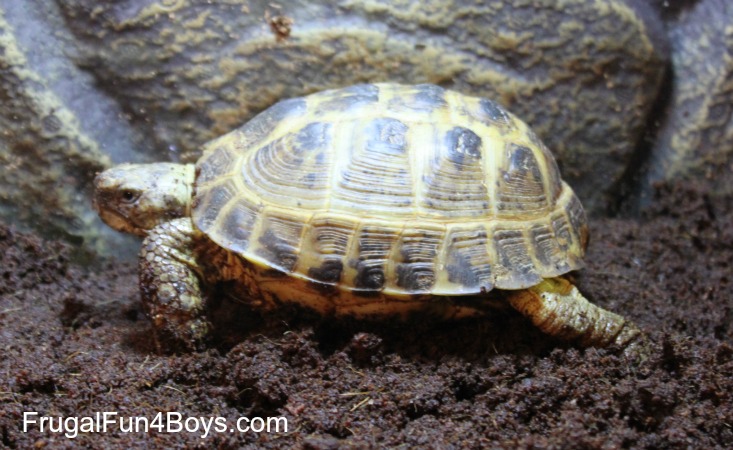 Frodo has a brand-new UVB bulb and some calcium powder to sprinkle on his food, so hopefully we can keep this one healthy! We also bought him a log to hide in, and he loves it. 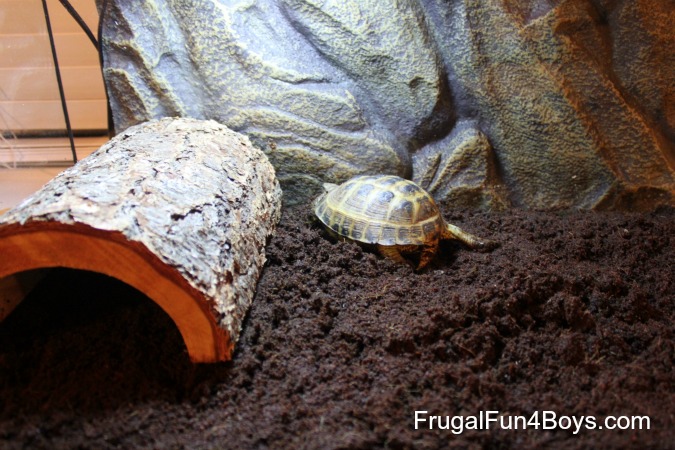 The box turtle ate (well, was supposed to eat) worms, so I had a lovely container of them in the fridge! I was thrilled to learn that Russian tortoises should eat a mixture of commercial tortoise food and veggies and not worms and bugs. We are feeding him kale and carrots. Squash is another good food, and we can also feed him fruit, although the book said that should be a treat and not every day. We gave him apples yesterday, and he seemed to like them! 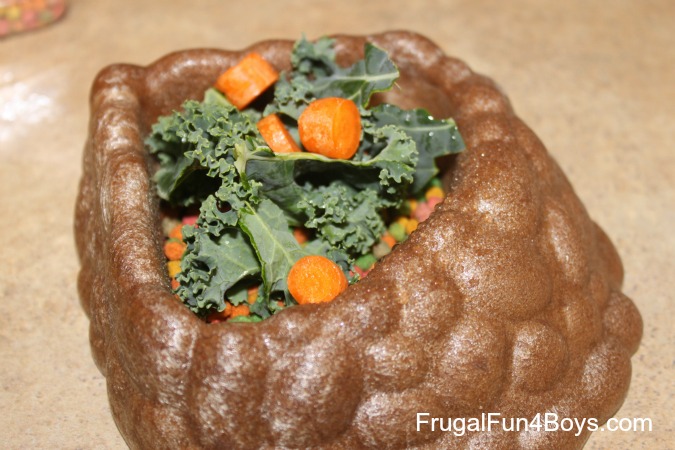 We are all having so much fun observing our new pet! We all love watching him eat. Also, he is surprisingly heavy, and yet he carries that big shell around with ease. Being a land creature, he spends him time out of the water, but he still needs a water bowl that is big enough to soak in because his body absorbs the water that way. The first time he got in his water bowl, the boys had fun watching him try to figure out how to get out!