There are so many animals that I never had much appreciation for before having four sons. Bats are definitely in that category! The boys love them, along with snakes and tarantulas and other creatures like that.  In fact, they discovered this summer that if you hang out in our back yard at dusk, there are bats that circle above our fence.  I went out and watched with them and decided that bats are almost cool.  They eat mosquitos, so I’m good with that.

Here are some instructions for building LEGO® bats!  They are a little cuter than the real thing, in my opinion.  Build a tree to display them in, and you have a fun Halloween decoration. 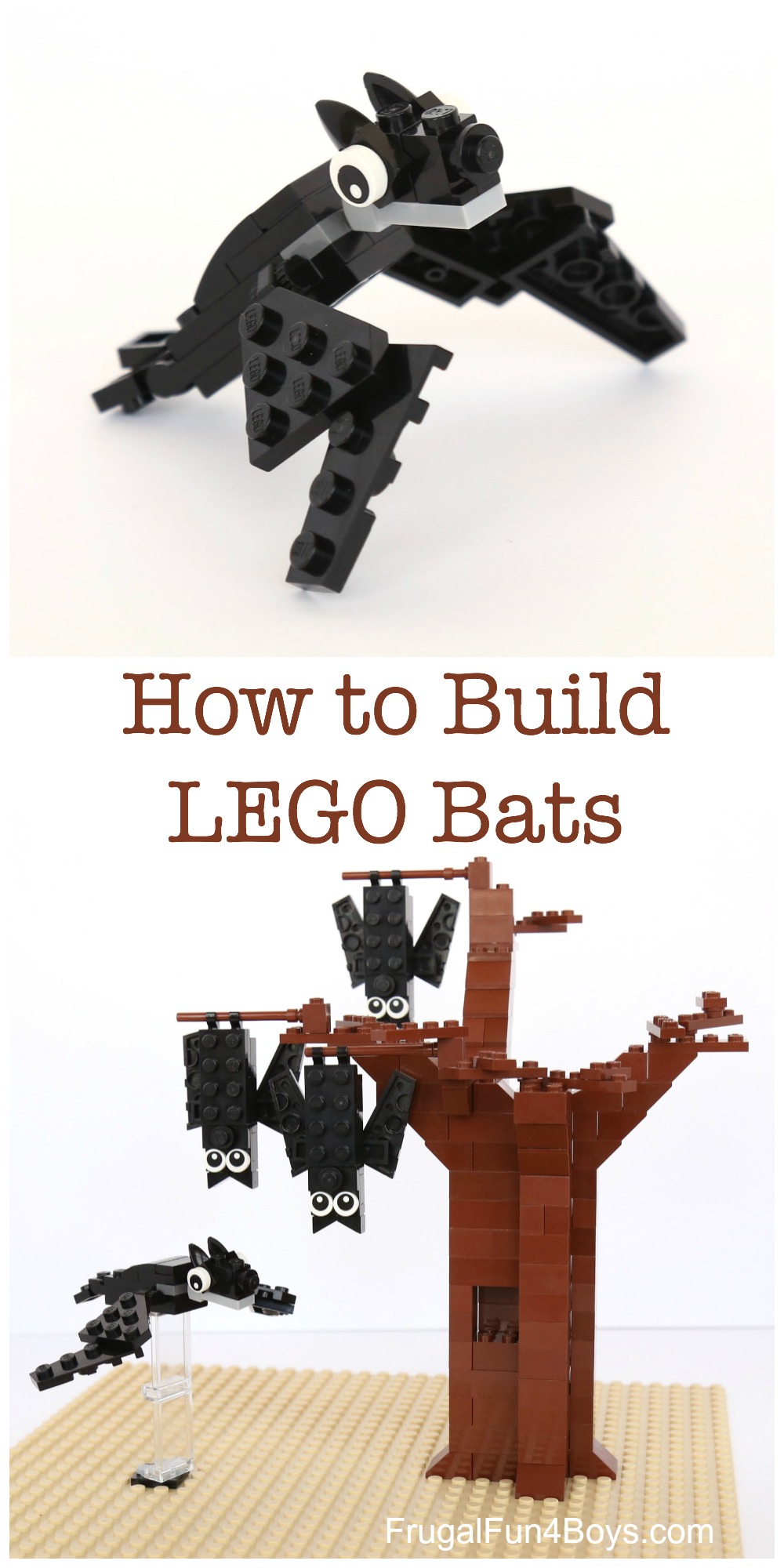 We built a tree for displaying our bats, and I really love how it turned out.  A cave might be fun too, but then you’d have to figure out how to attach the little poles for holding their little feet. 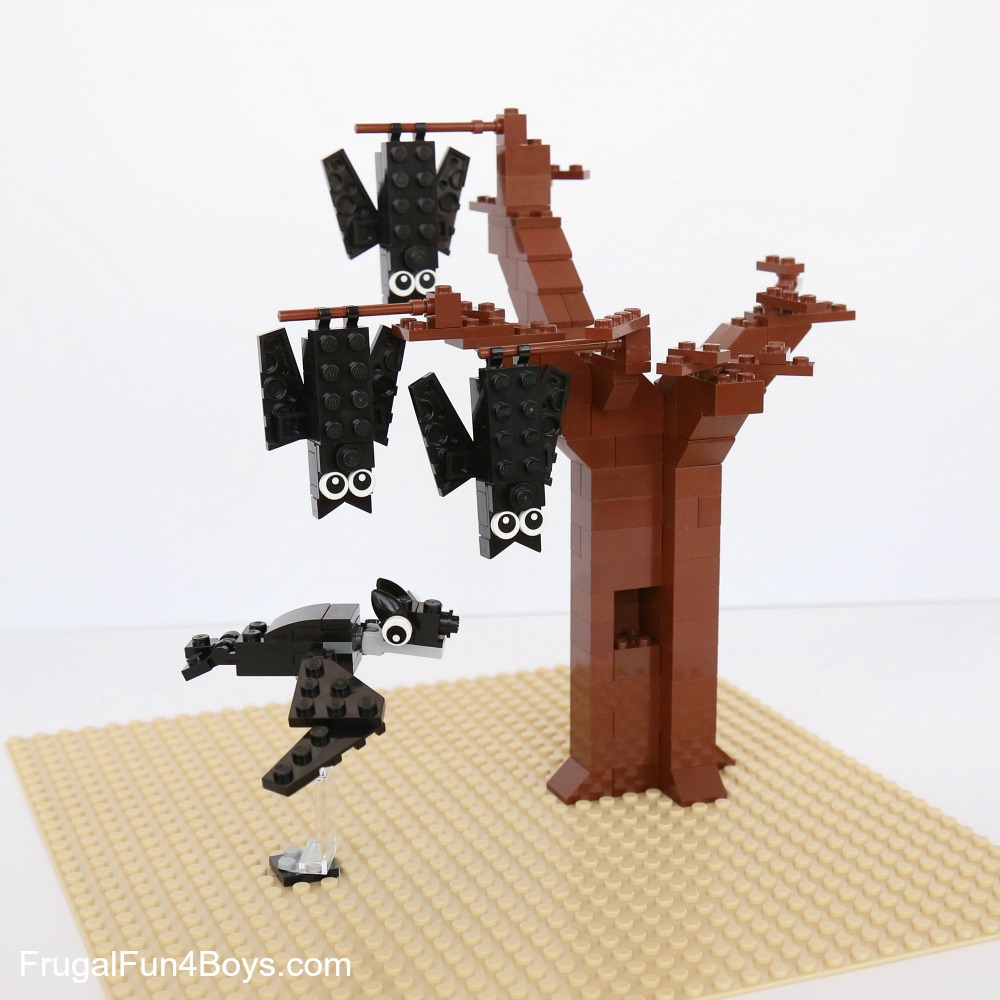 I designed the upside-down bats, and my 8 year old designed the posable bat.  He worked on it over the course of a few days, getting it just right.  It’s pretty cute, in a weird sort of way. 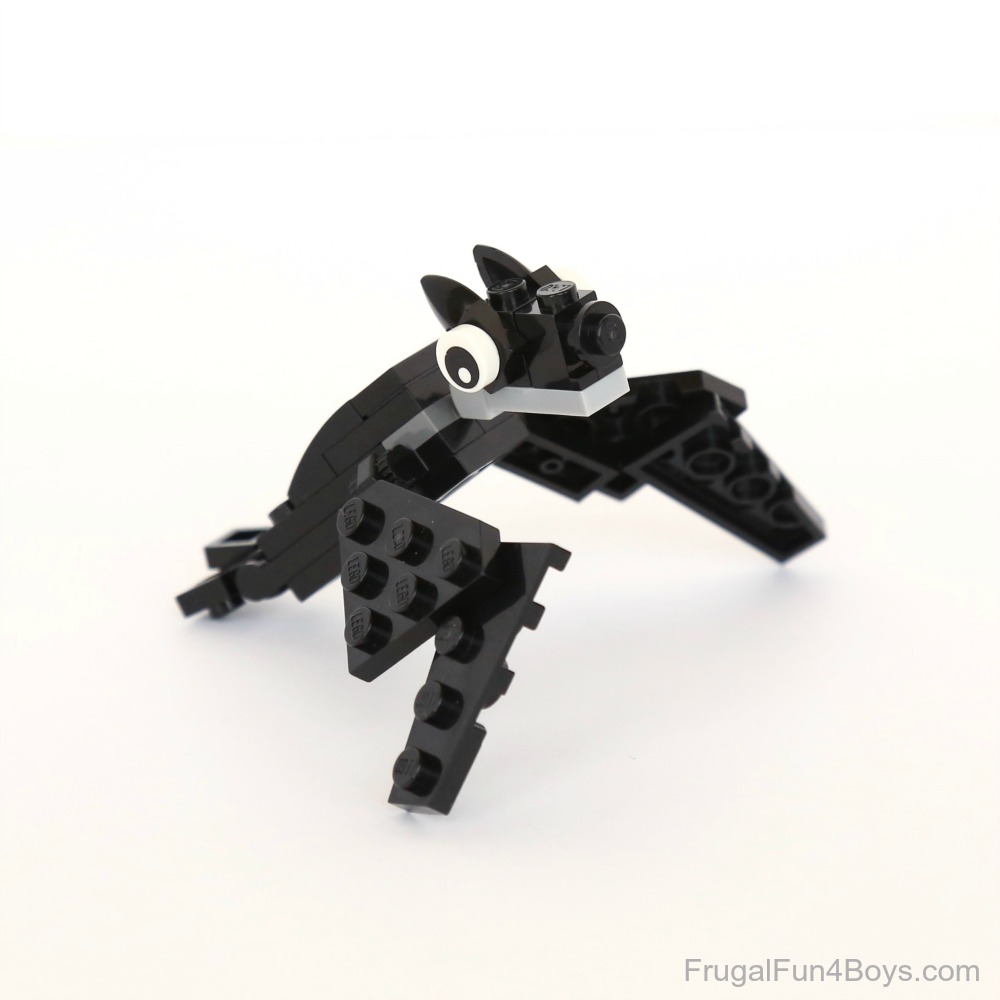 Ready to build some?  First let’s make the upside-down bat.

Step 1:  Grab the pieces shown for building the bat’s face. 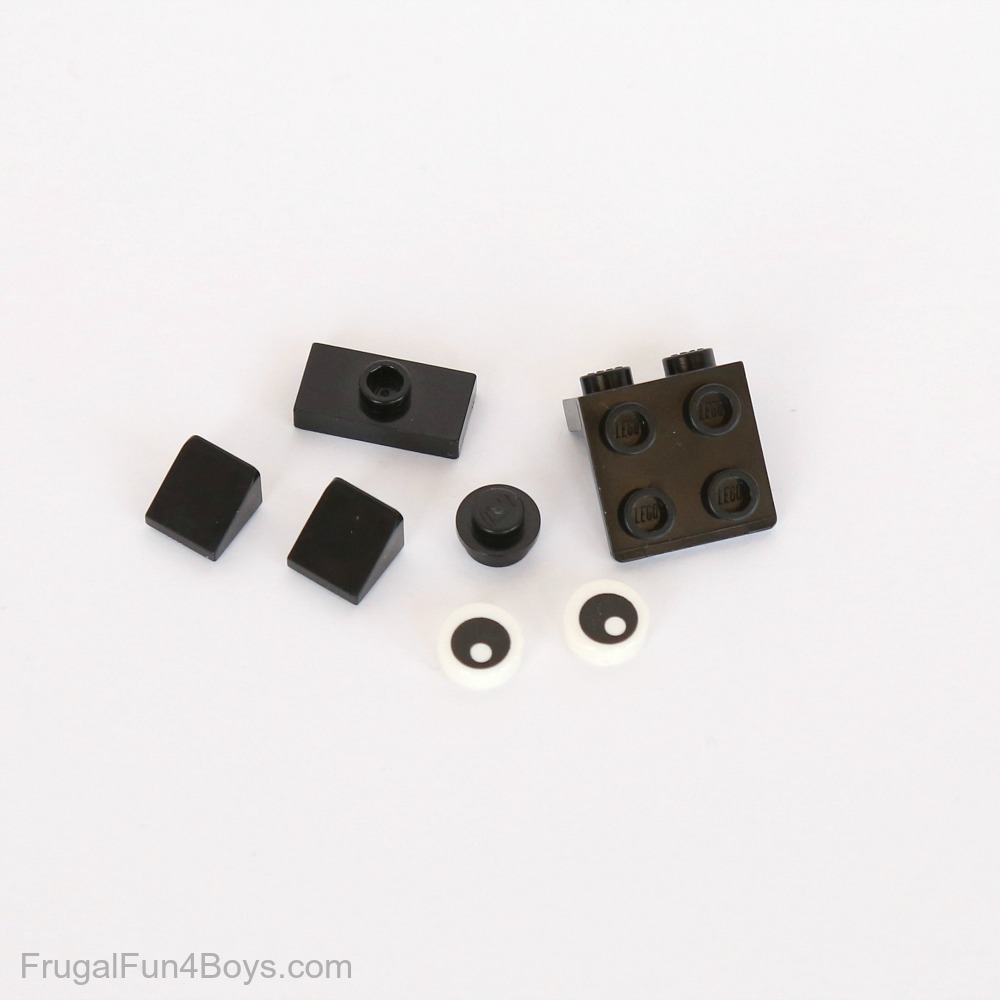 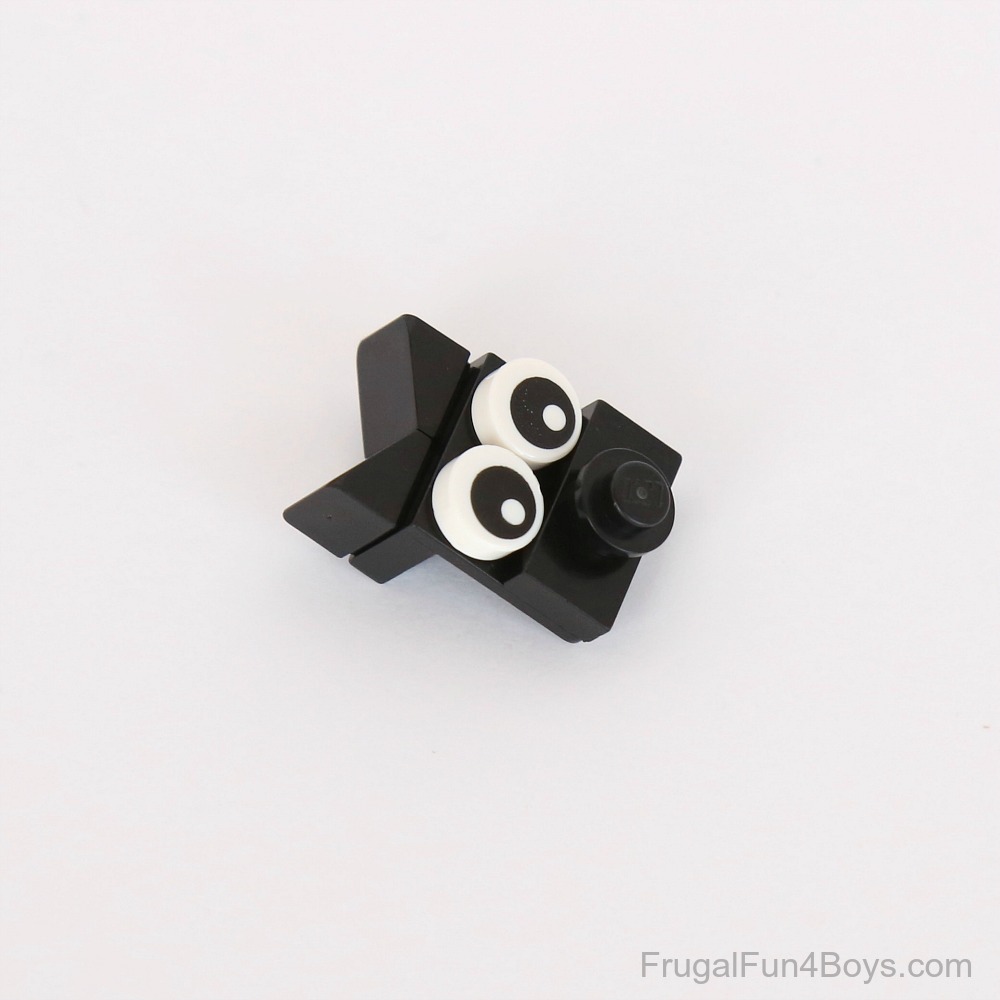 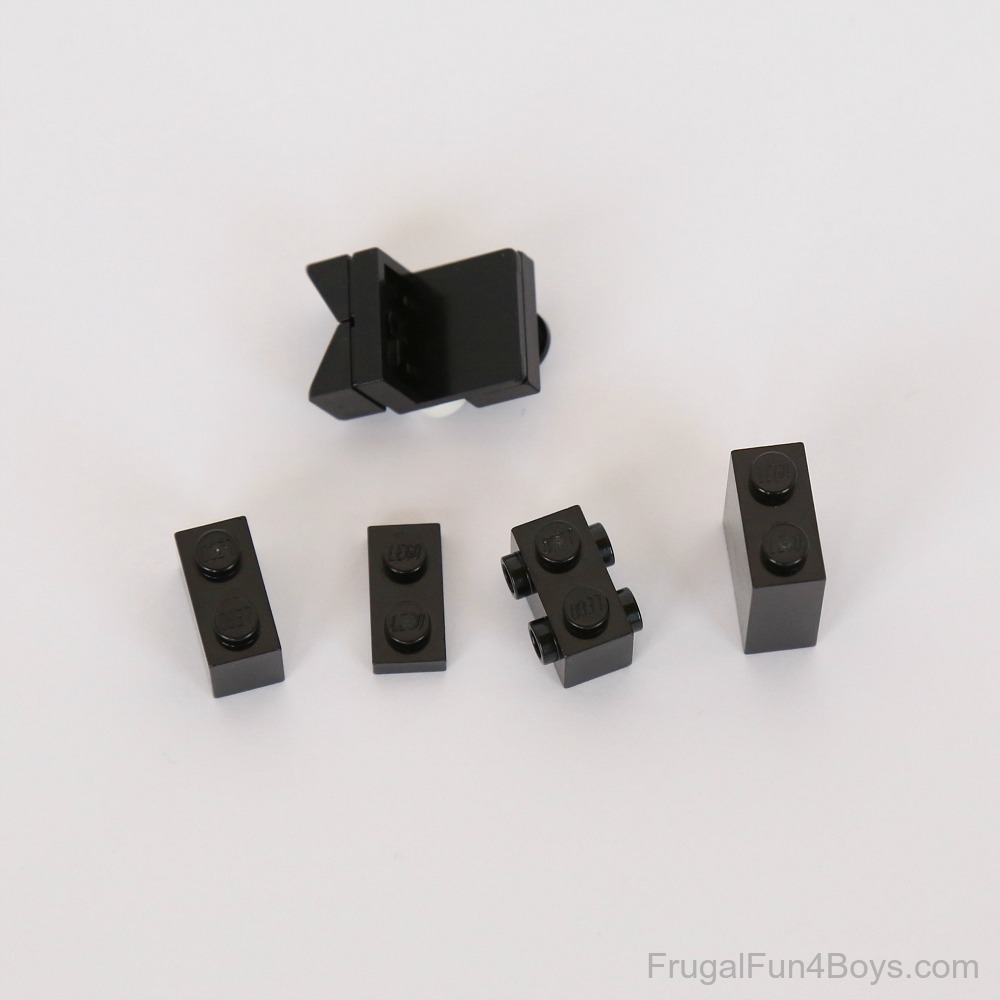 Step 4:  Attach them in order to the underside of the bracket. 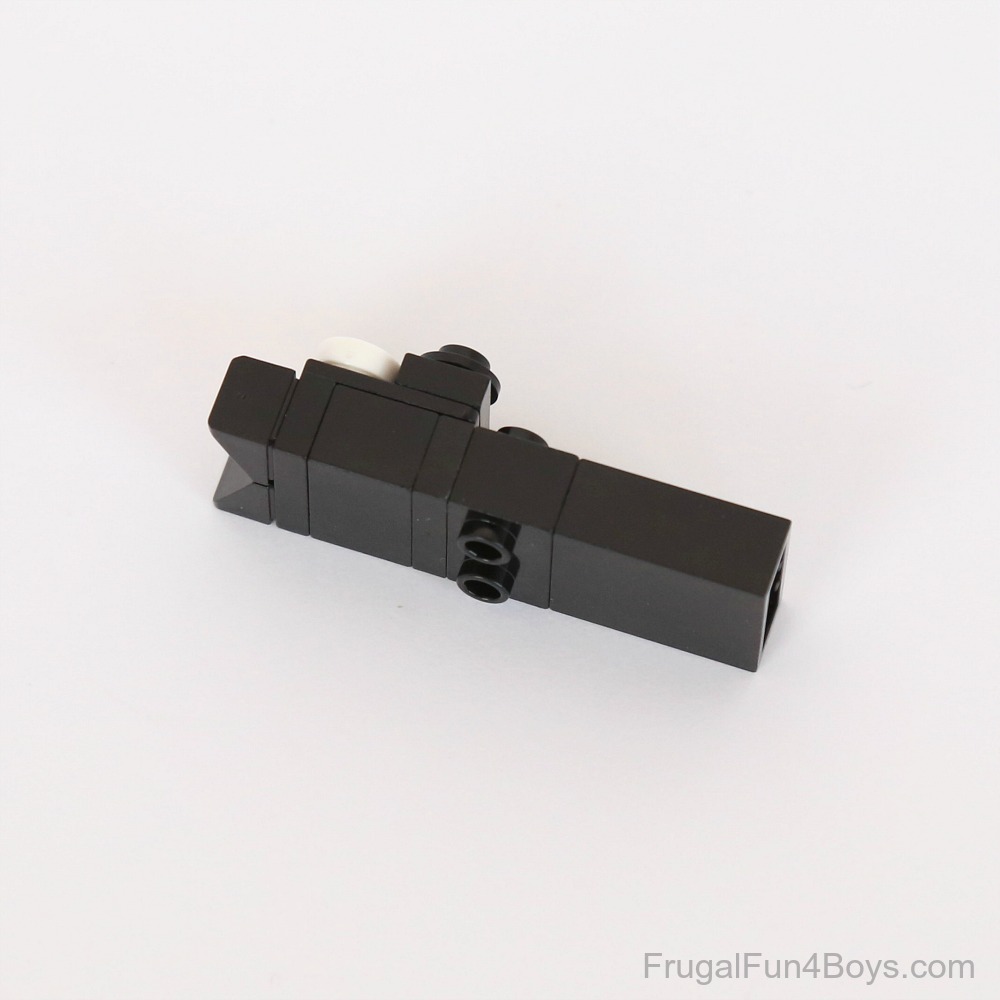 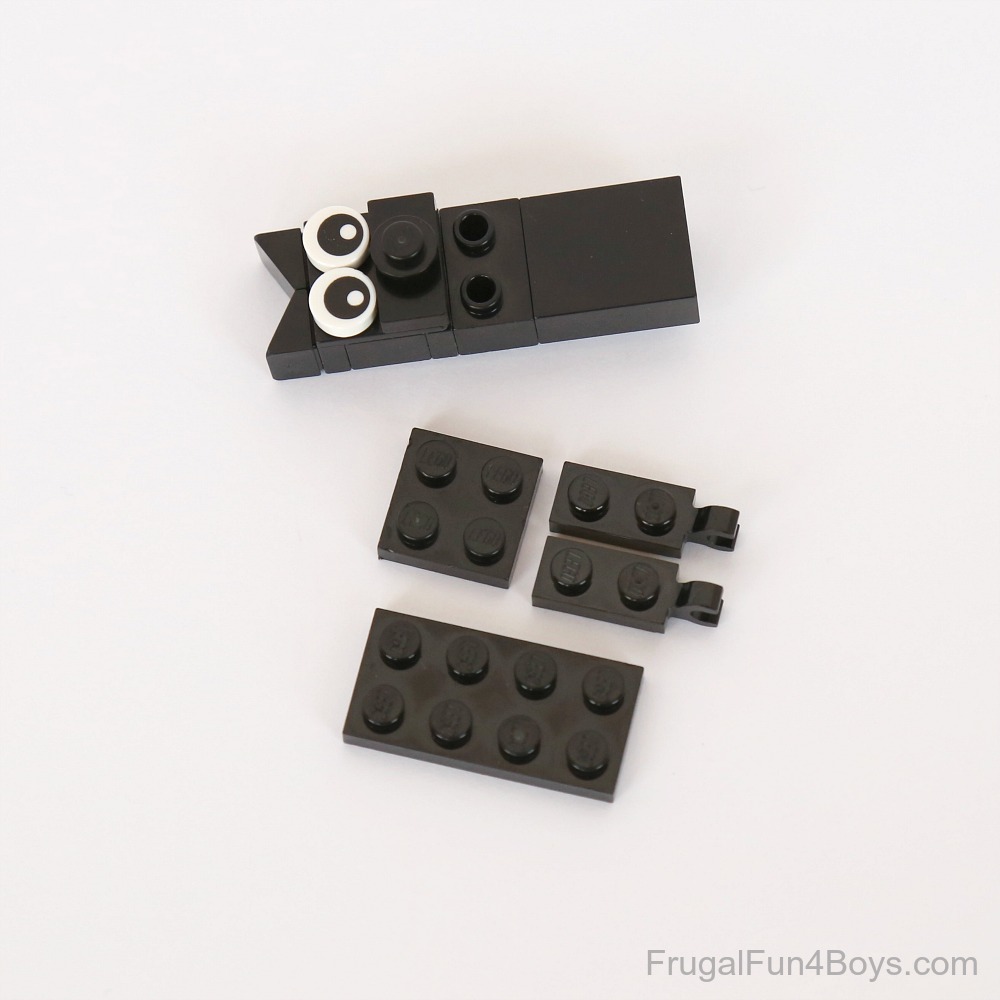 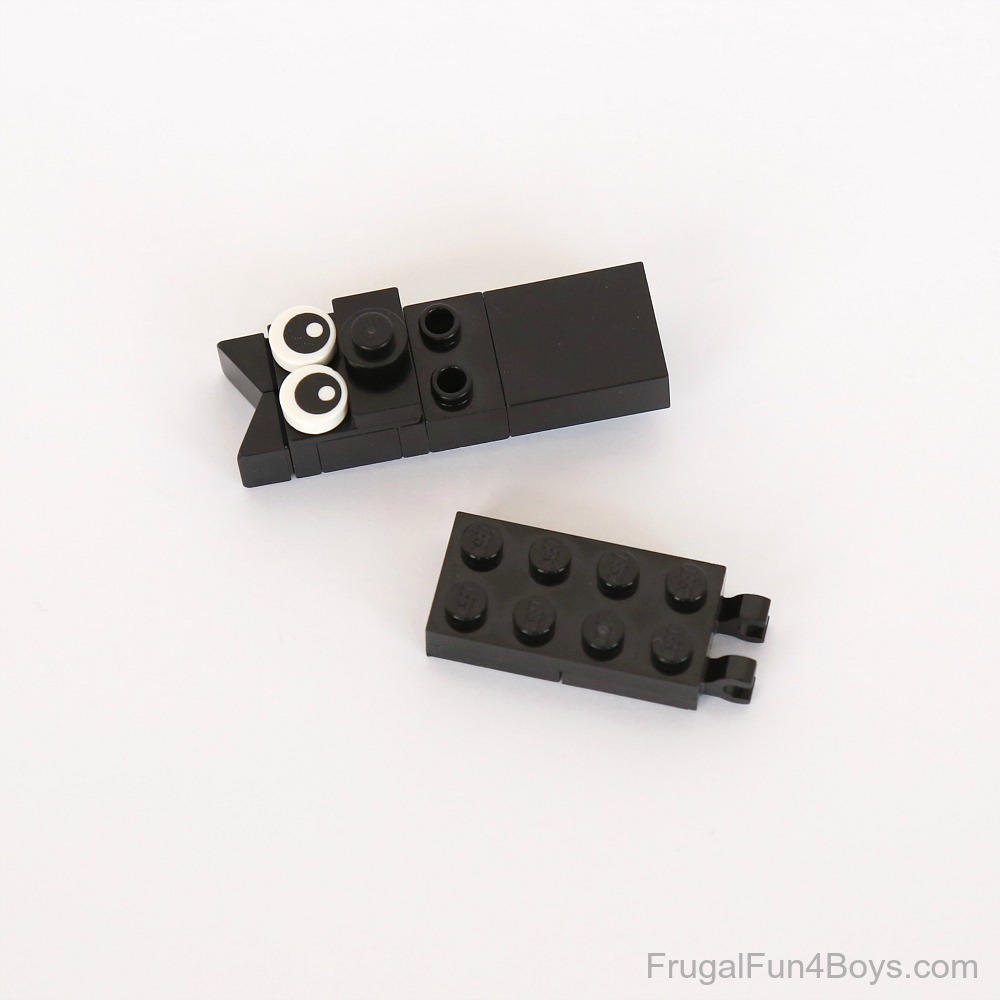 Step 7:  For the wings, you’ll need two 1 x 2 plates with one stud on top and two 2 x 4 wedge plates. (Note that the wedge plates have either a left or right orientation.) 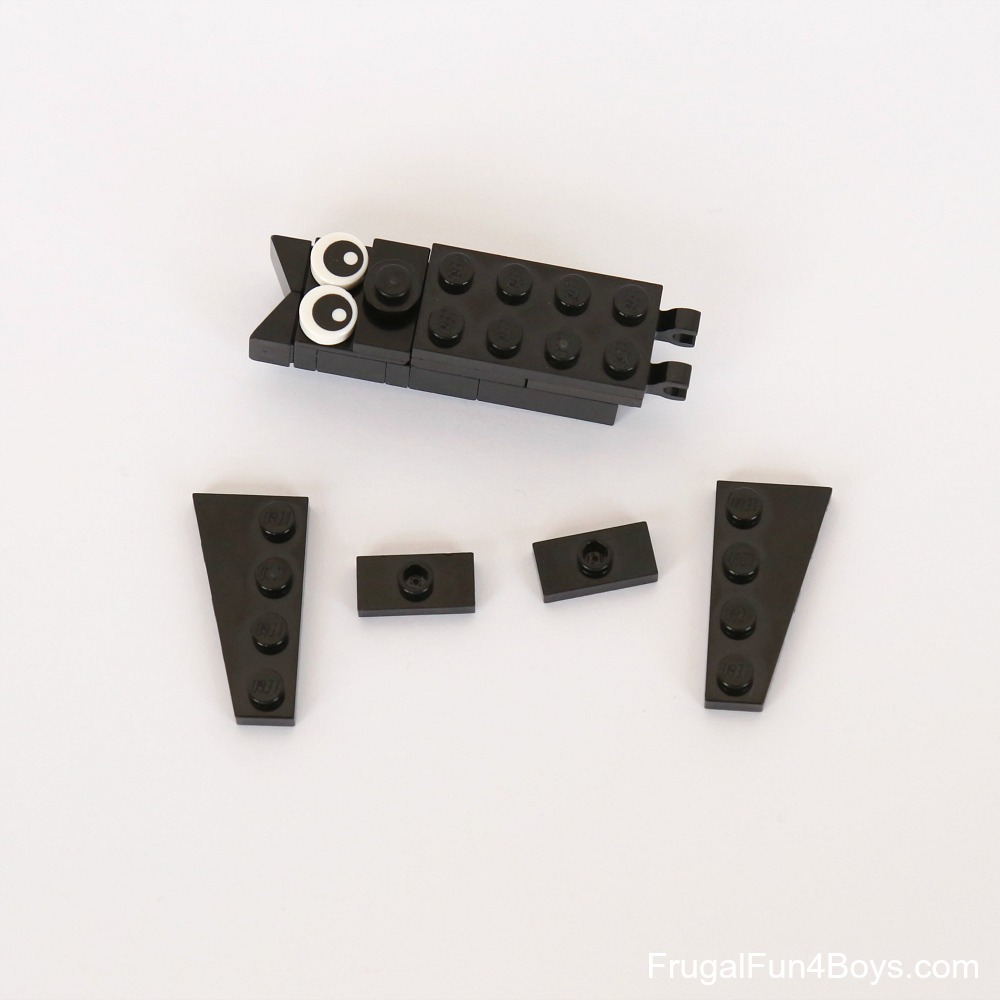 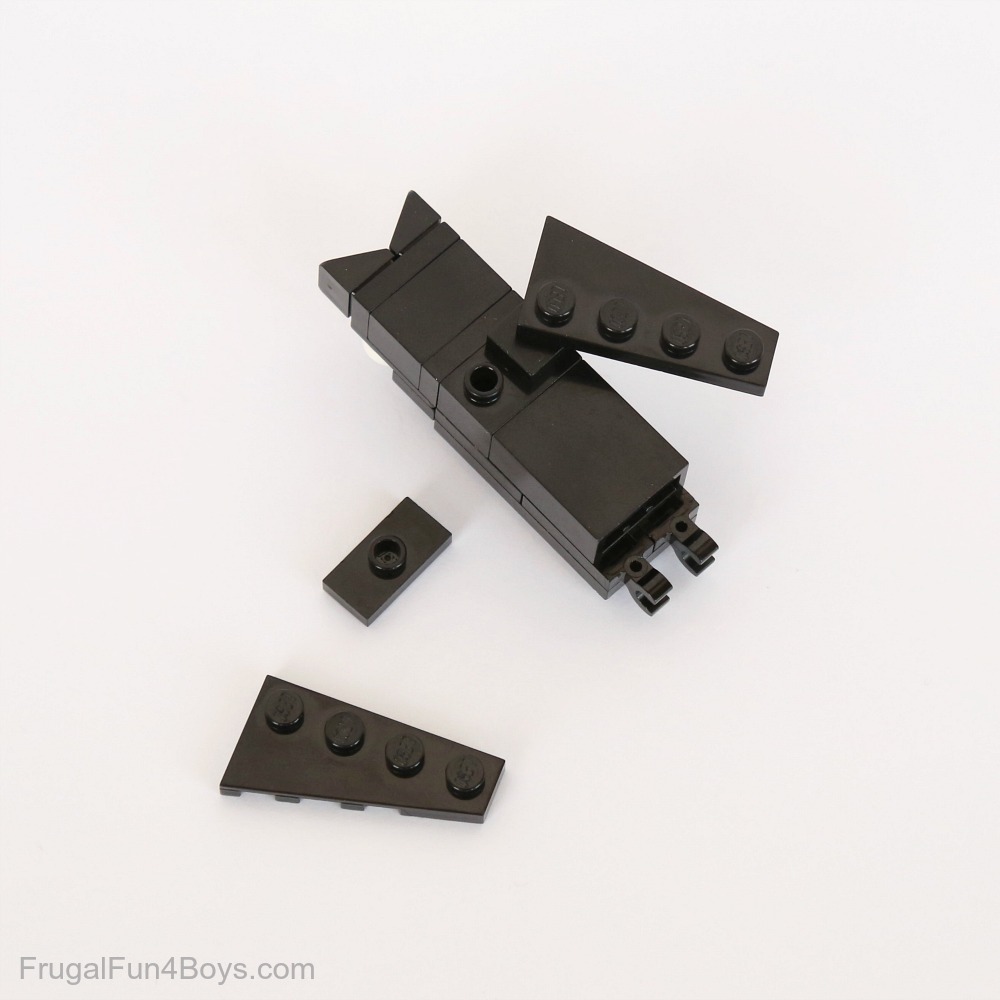 Once the wings are on, the bat is complete!  The clips on the feet allow the bat to hang onto a LEGO bar. 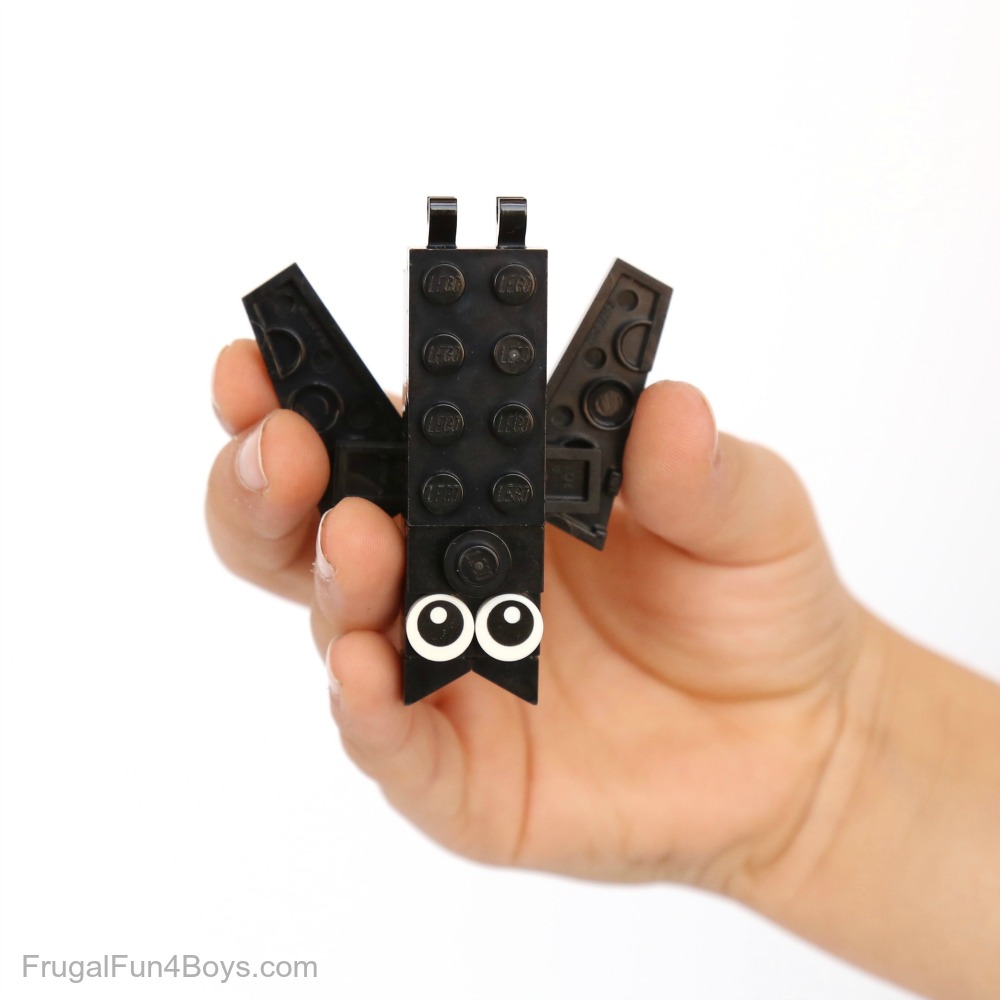 Here’s a better view of how we attached the bats to the tree.  Each bat is clinging to a LEGO bar. We stuck the end of each bar into a 1 x 1 brick with a stud on the side. 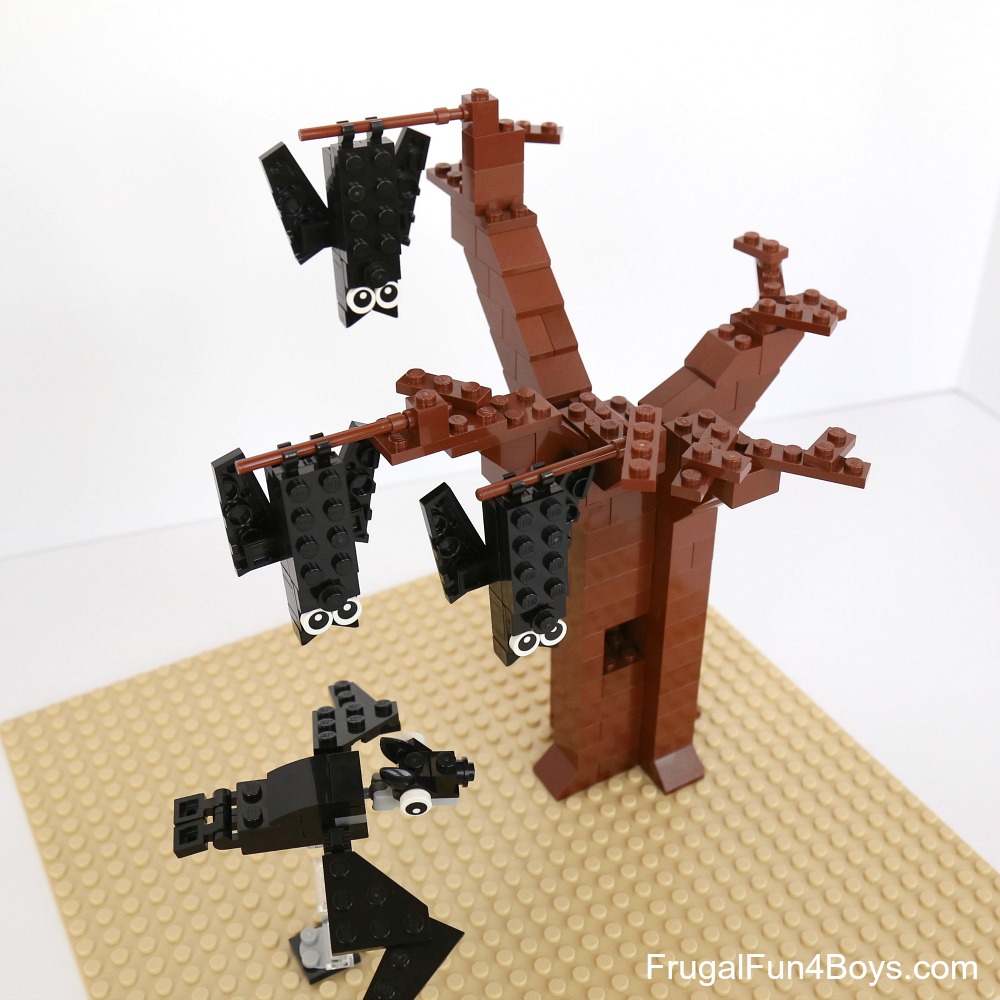 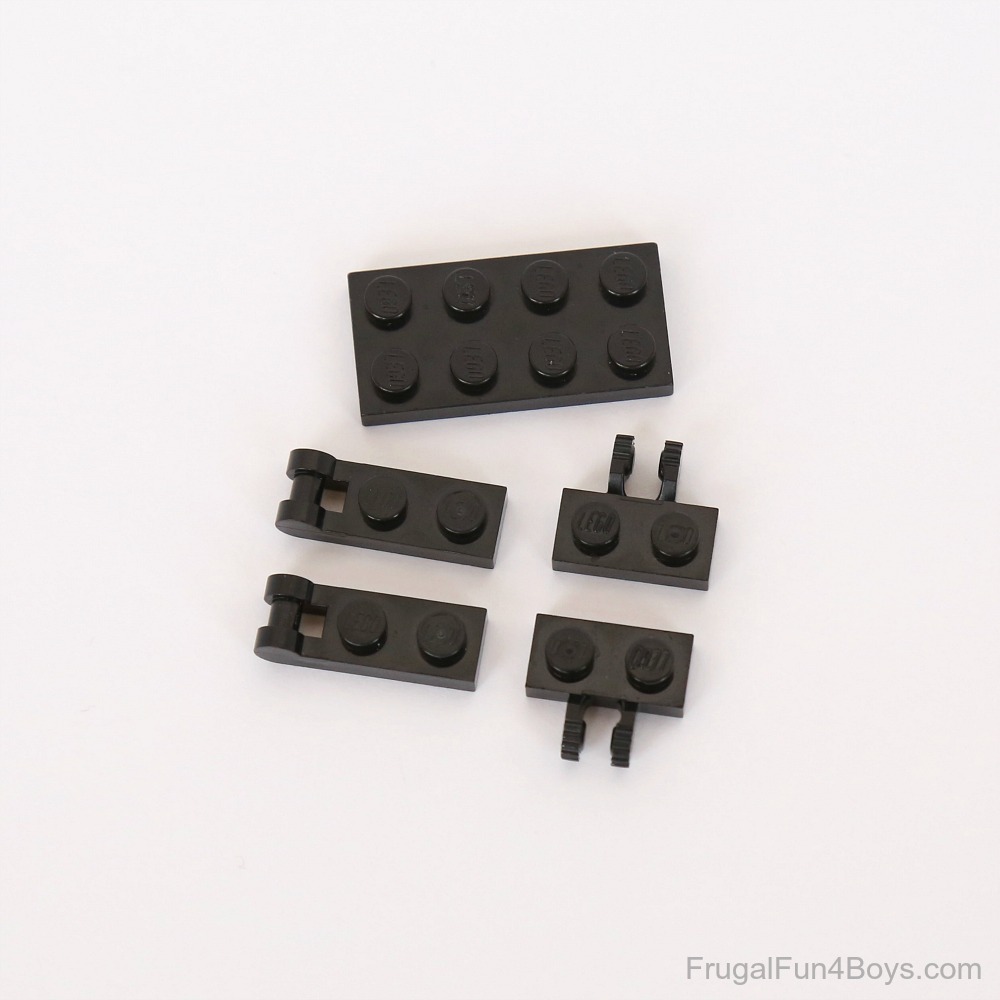 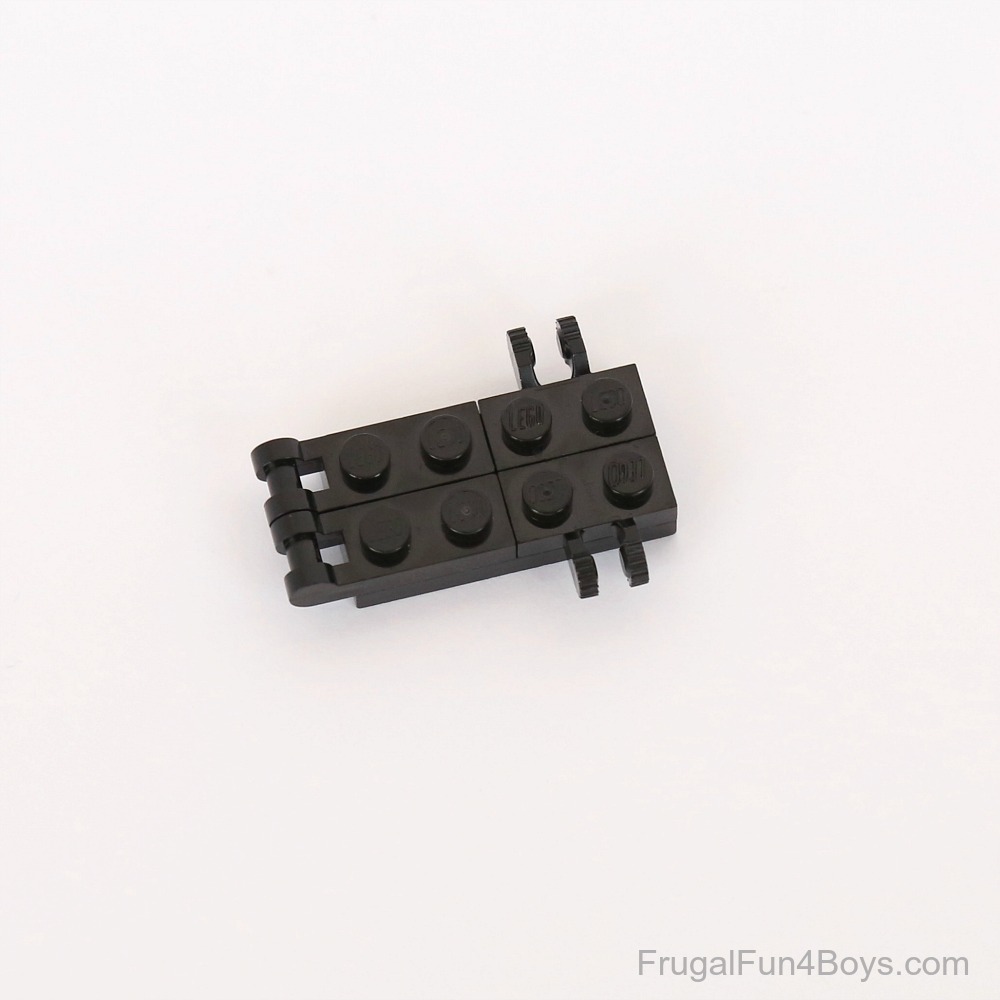 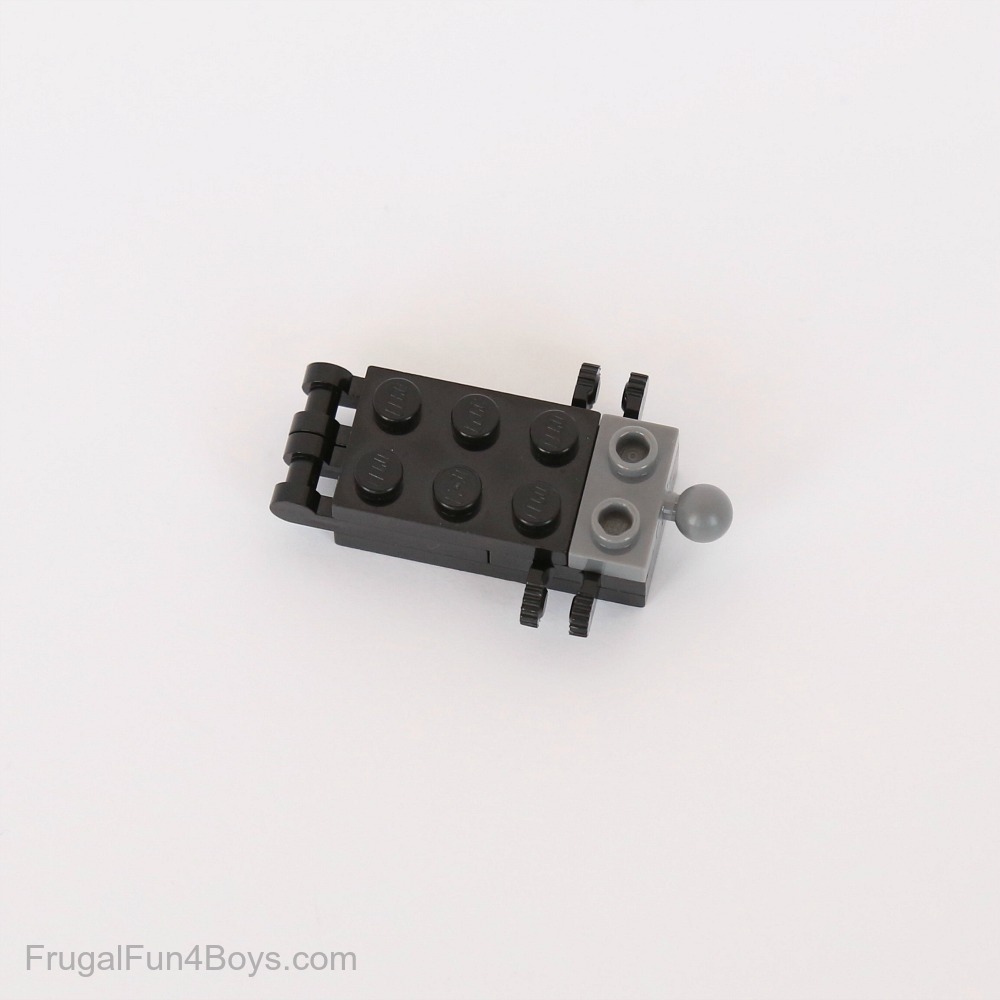 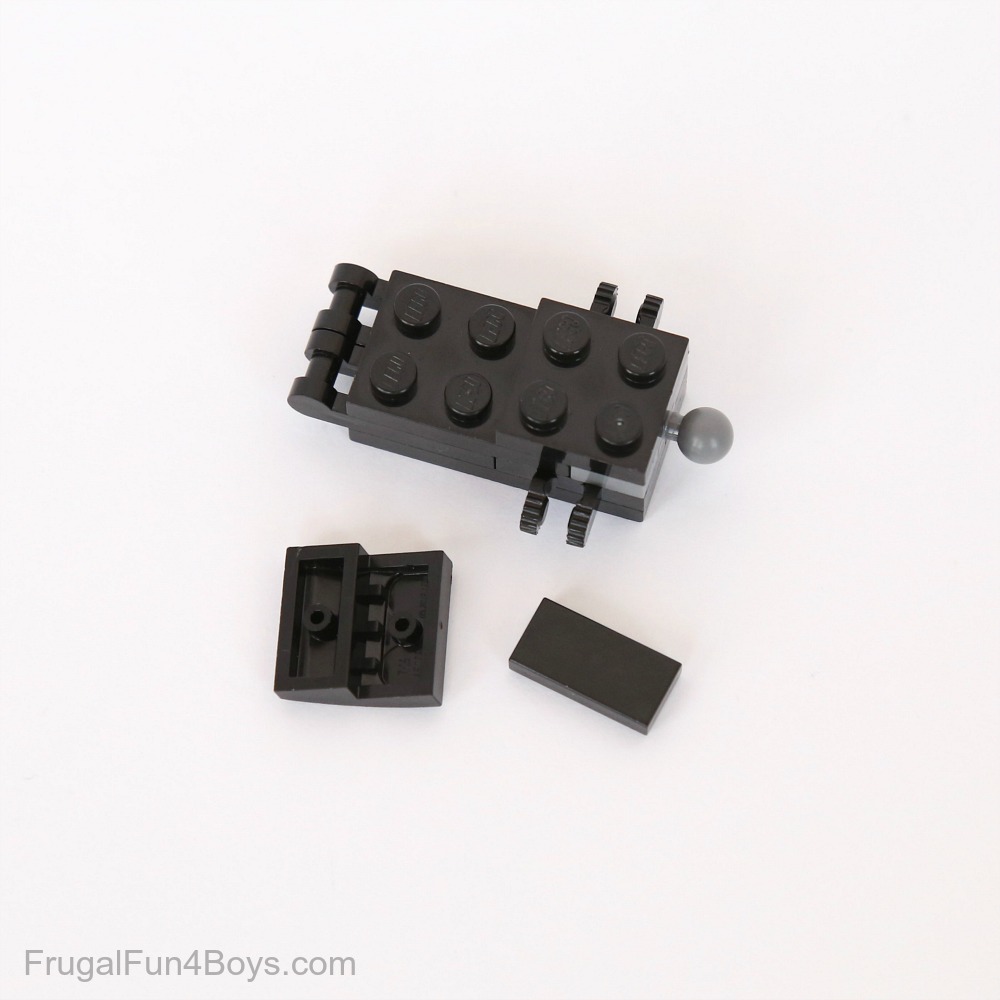 Step 5:  Attach the curved slope and the tile as shown. 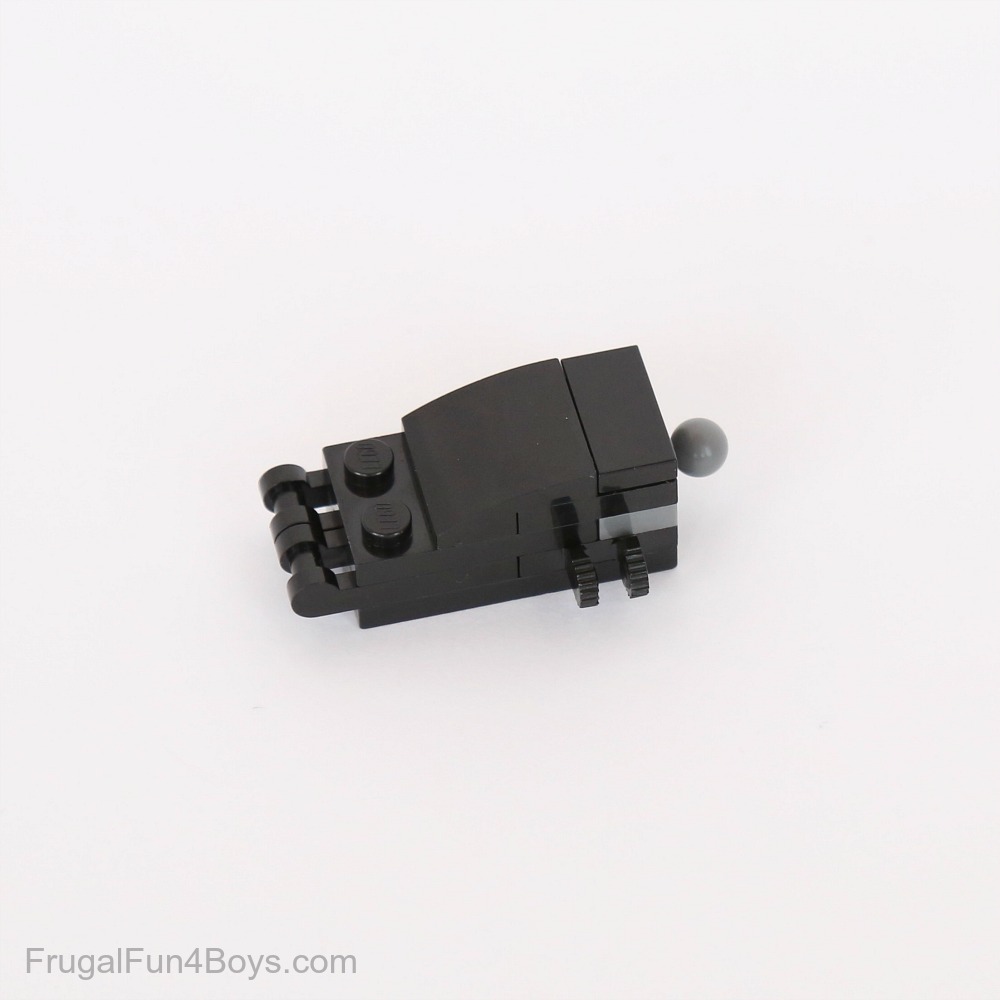 Step 6:  Gather the bricks shown for building the bat’s head.  Attach the eyes to the two 1 x 1 plates with a claw. 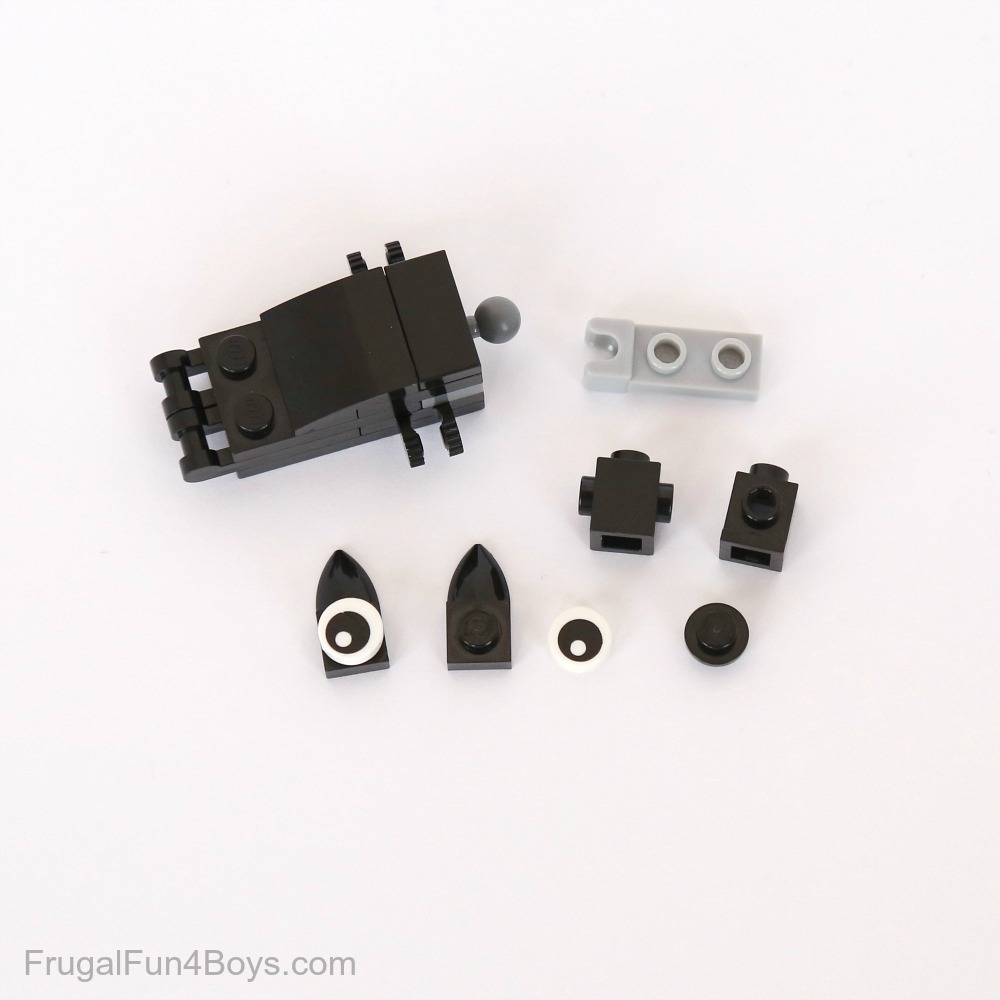 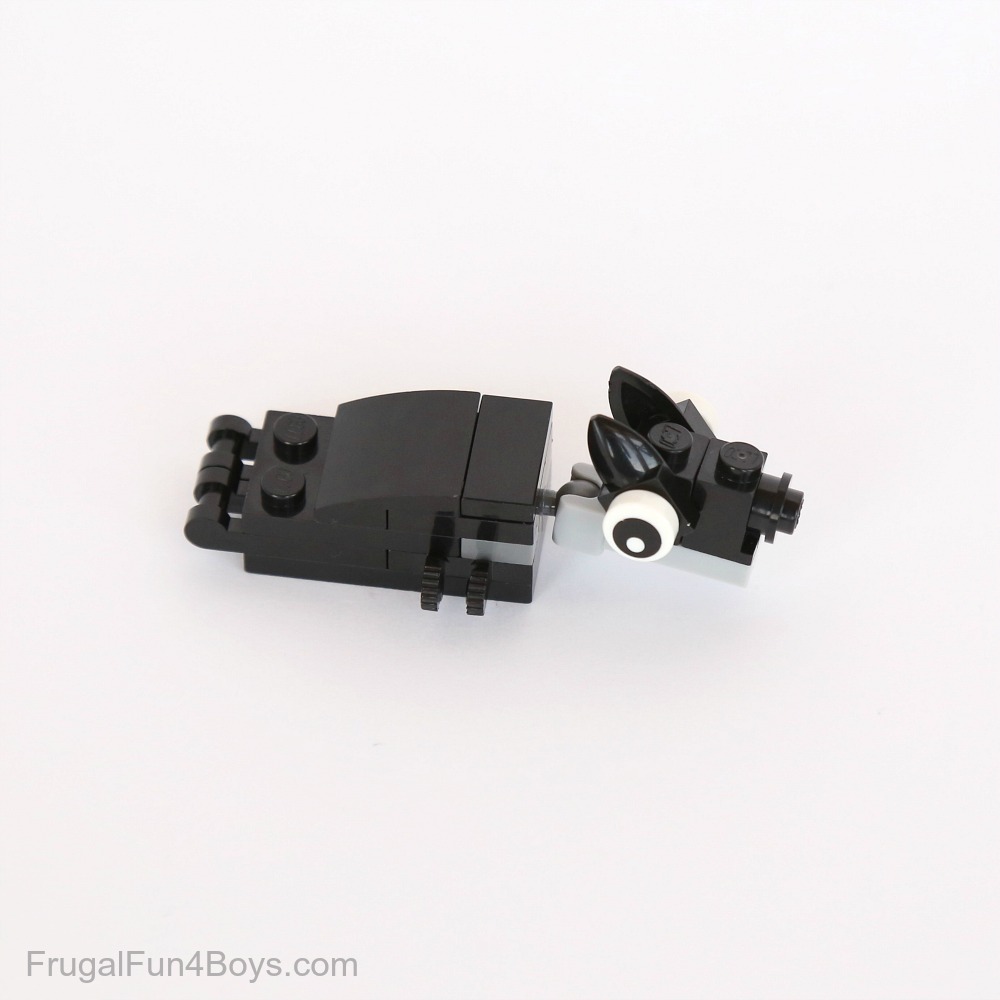 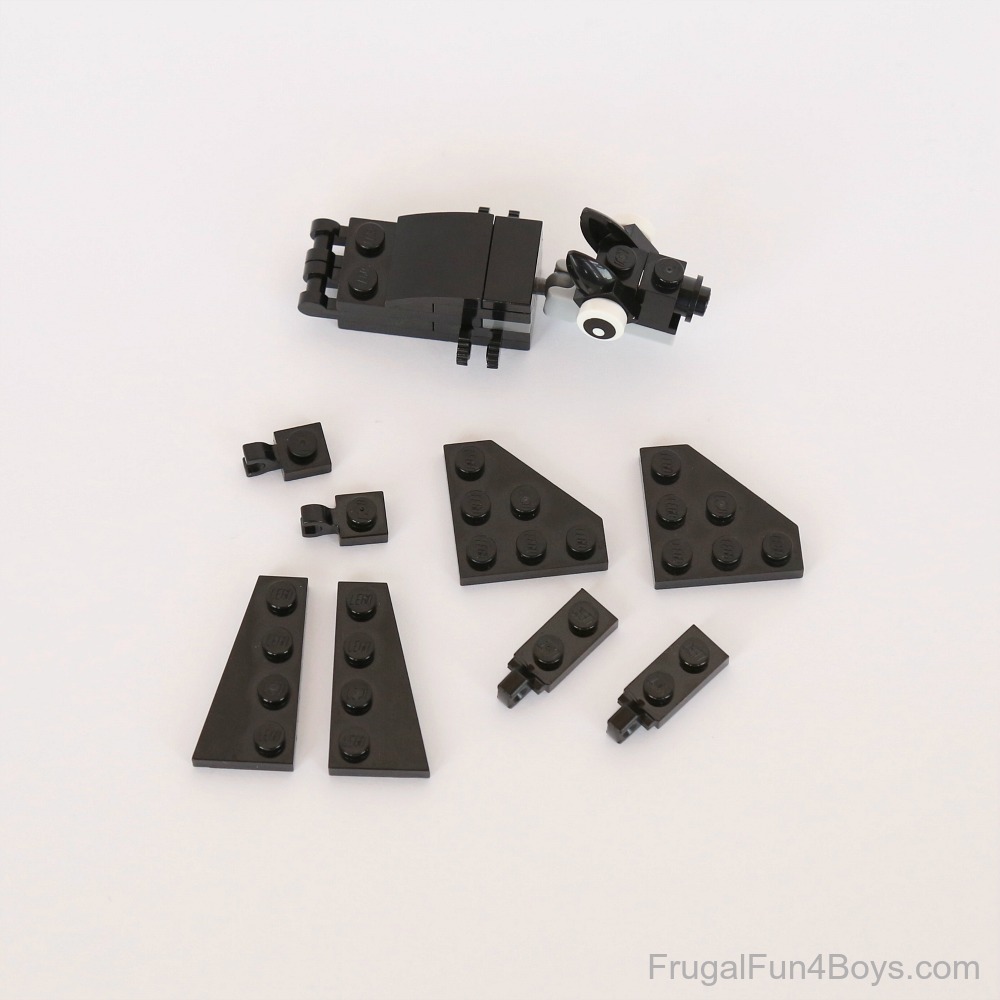 Step 9:  Attach two 1 x 2 plates with a locking hinge on the end.  If you don’t have the locking hinge pieces, use another type of joint. 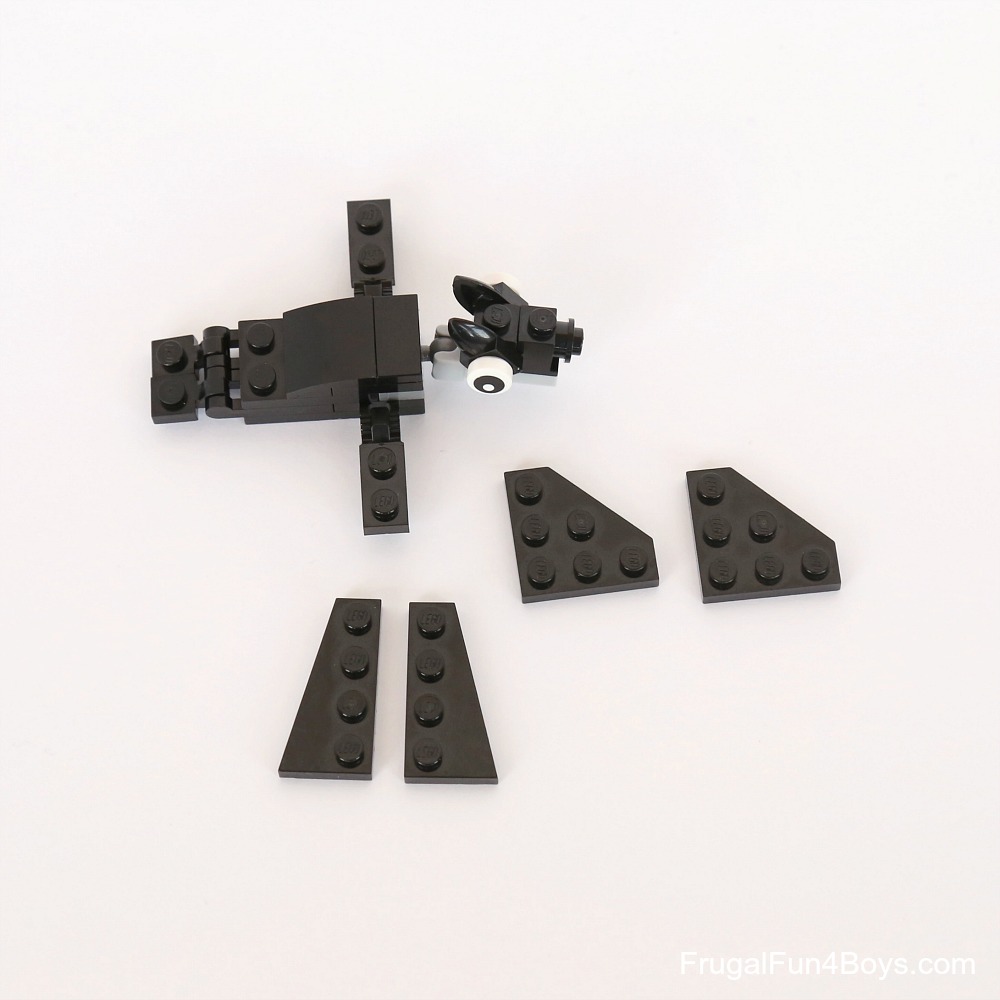 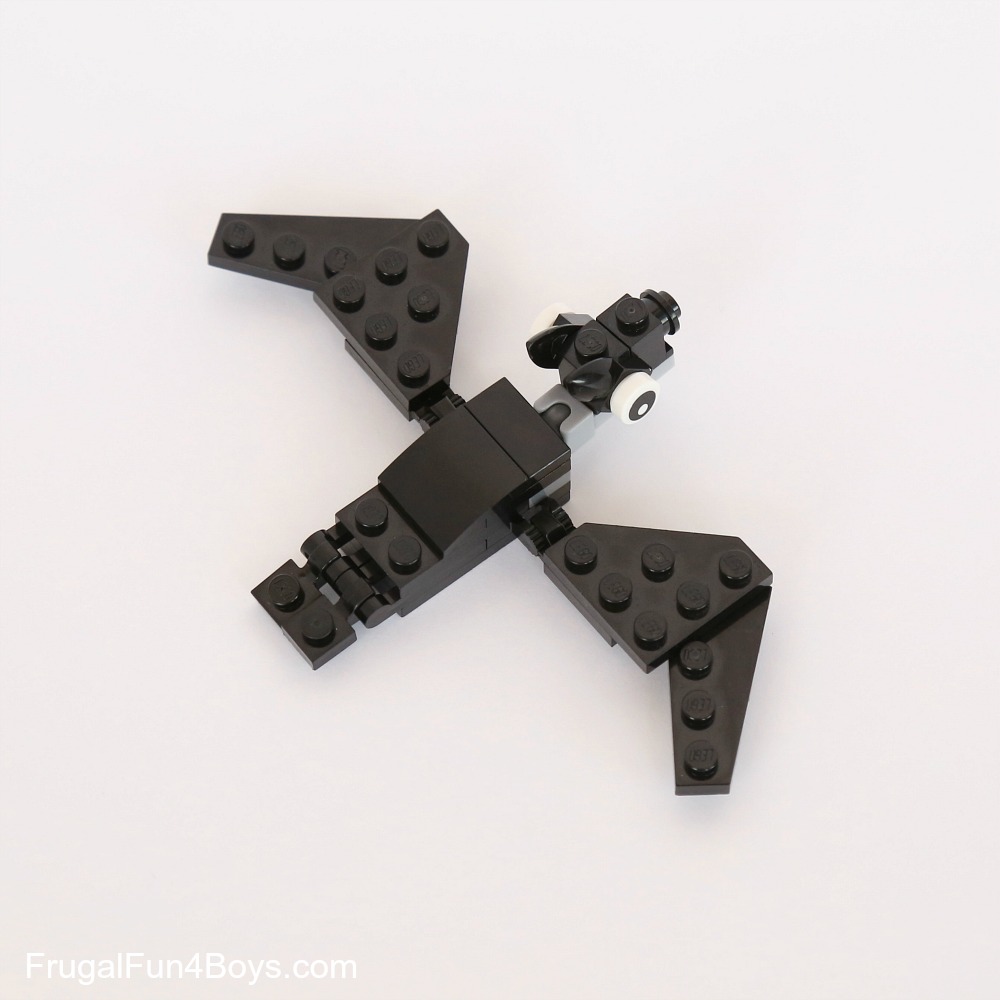 In order to make the posable bat look like he is flying, we put him on top of two clear panels.  I put a turntable under the panels so that we could turn him to the angle we wanted. 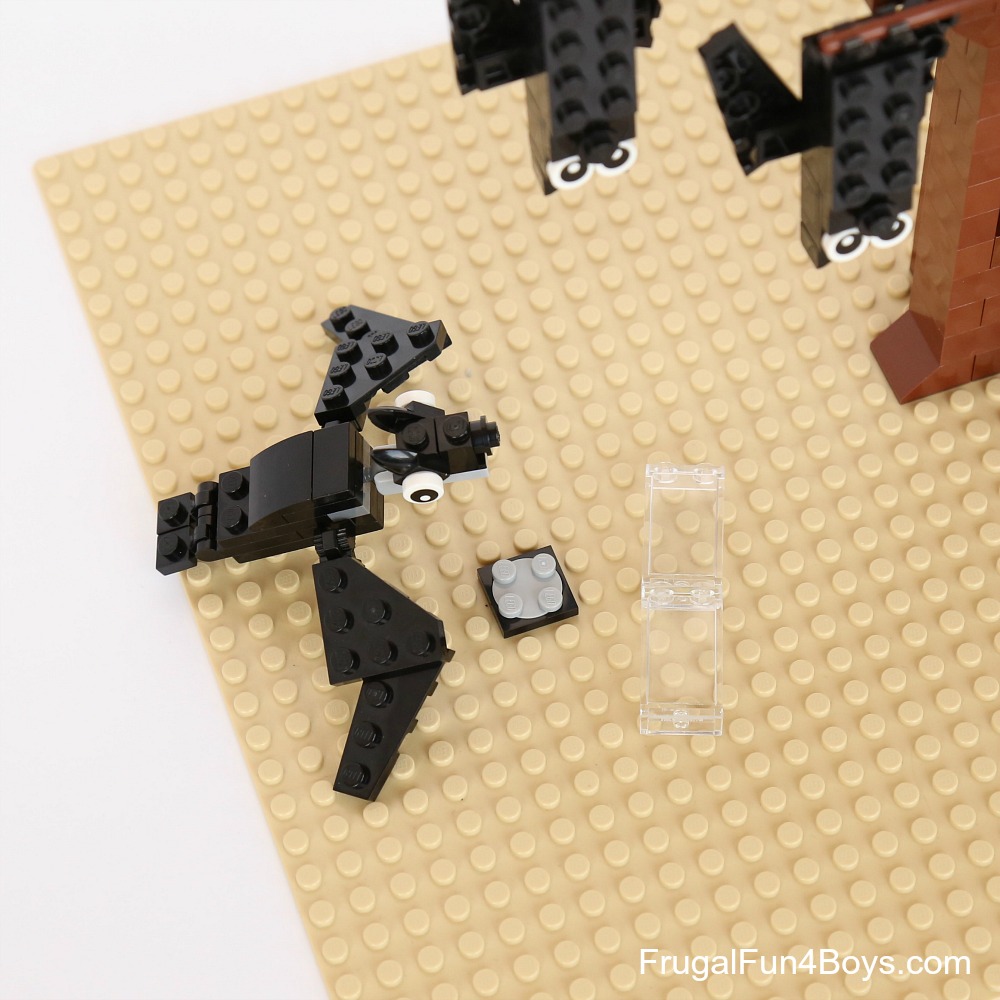 Also, we have two print books full of LEGO® ideas!  Why buy the kids more new sets when you can find new inspiration for the bucket of bricks you already have?

Epic LEGO® Adventures with Bricks You Already Have – Read along with five hilarious adventure stories and then follow the step-by-step instructions to build all of the projects in the stories.  This book will inspire hours of creative building and play.

LEGO® is a trademark of the LEGO® group of companies which does not authorize, sponsor, or endorse this site. 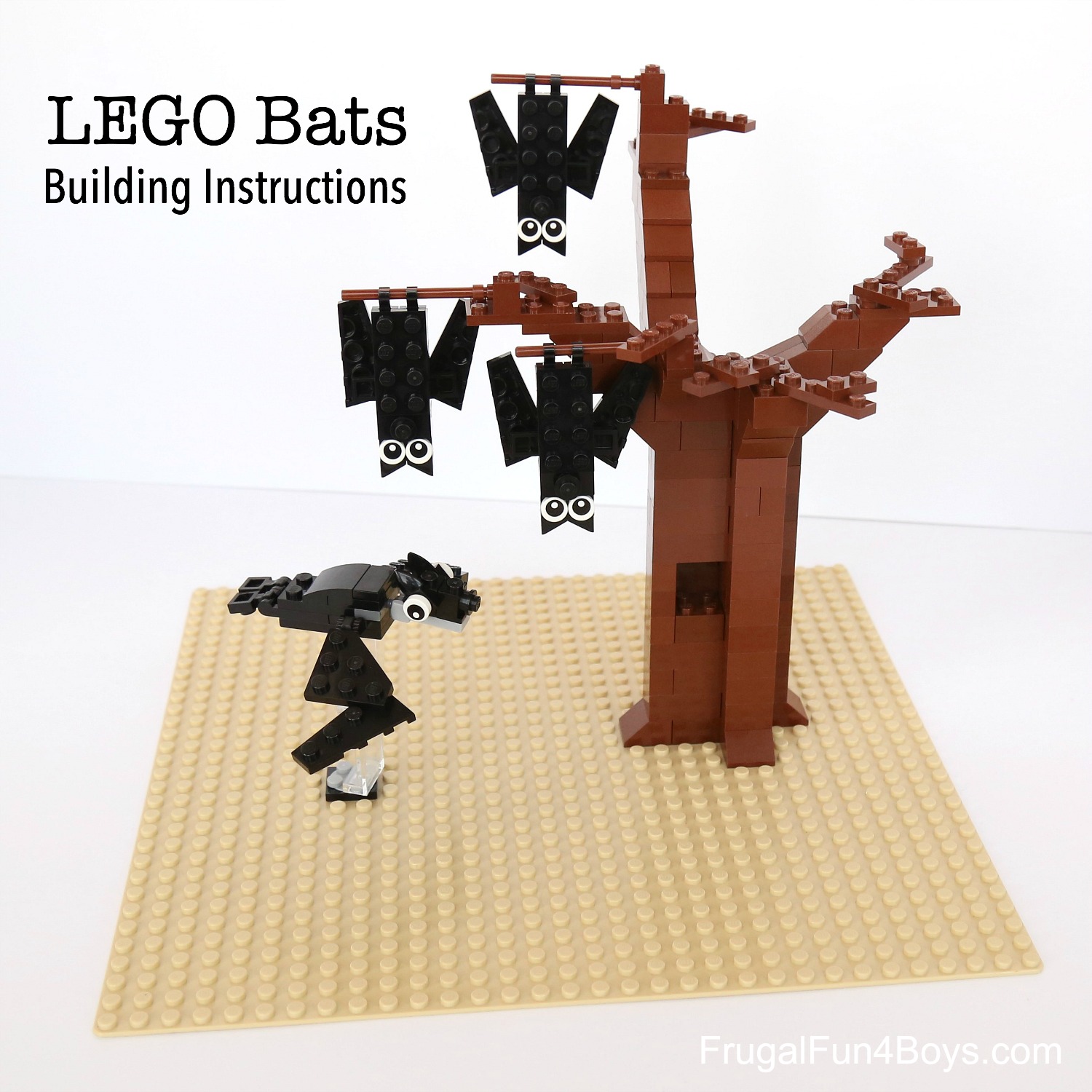