This past Saturday, my third son celebrated his fourth birthday. We usually only do birthday parties with invitations and friends at age 5, and we’ve decided that they can have a party again at age 10, starting with Aidan who will be 10 in July. On the years with no parties, we celebrate with the grandparents and maybe invite another family over or do a fun outing with another family.

Owen said that he wanted a LEGO® birthday, and last week I saw the perfect cake on Pinterest! 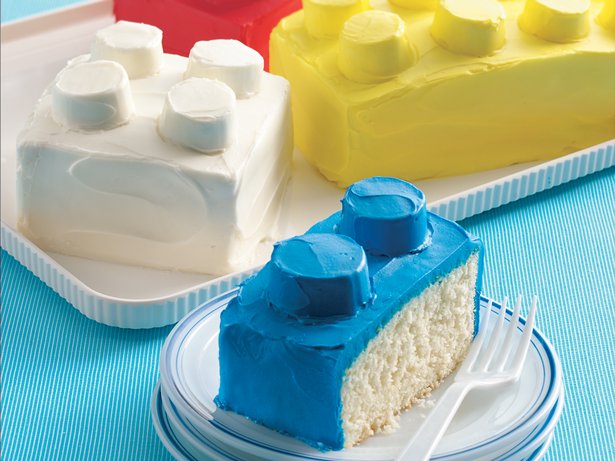 This awesome LEGO® cake uses marshmallows cut in half for the LEGO® brick dots. It looked fairly easy, and with this tutorial on Betty Crocker’s website, I was pretty sure that I could pull it off!

Now first let me say that I probably shouldn’t have been so confident because I have a history of ruining birthday cakes. On Aidan’s first birthday, I forgot to put icing between the layers. I’ve also had layer cakes that slid apart and turned into a mess. So I’ve pretty much given up on cute cakes, and I usually just bake a cake in a 9 x 13 pan and then ice it right there in the pan. The only cake that has turned out “cool” was Aidan’s skateboard cake, and that was because my husband took over and did the decorating after I ruined the initial idea, which was just a basic layer cake. (The skateboard cake was fairly foolproof, and I would actually recommend trying that one, especially if you don’t usually do “cute”).

Anyway, for the LEGO® cake, the first step was to bake a 9 x 13 cake, take it out of the pan, and then cut it into bricks when completely cool.

Here is mine coming out of the pan: 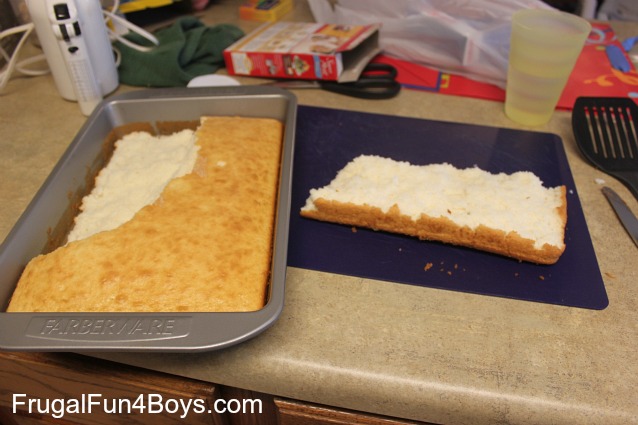 Yes, I DID grease the pan. I used a good coat of butter. But apparently, I should have floured it too.

I baked a second 9 x 13 cake with parchment paper under it. While that one was baking, I tried to salvage some of the broken cake to make some Lego bricks. 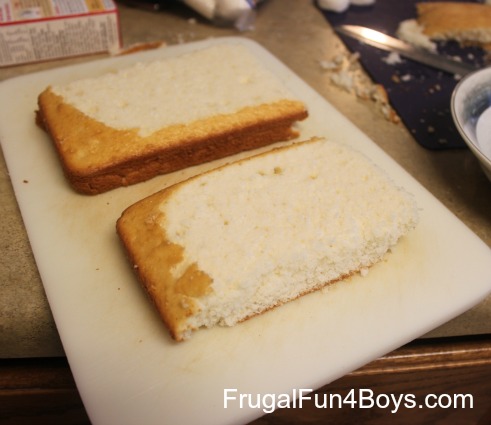 Cutting the cake into bricks was easy enough, but then came the icing step. (Feel free to laugh at this photo. It’s okay.) 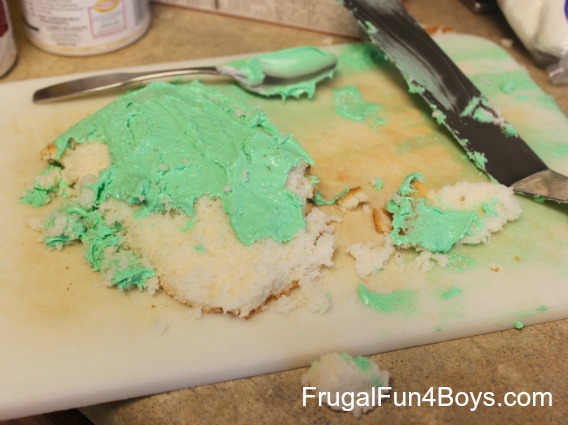 I was planning to do a crumb coat and then refrigerate the cake before adding another coat of icing. But I’m pretty sure this is not what Betty Crocker meant by a crumb coat! Chunks of the cake kept falling off, despite my careful work with my Pampered Chef spreader!

Be sure to note the ugly color of the icing. I had already added a TON of green food coloring and was afraid of adding more because I hate my kids ingesting that much dye.

I was ready to scrap the whole project and head to the grocery store for a cake, but the second cake had come out of the oven and slid right out of the pan, and my husband didn’t think we should give up yet! So he offered to see what he could do with the second cake. Here’s what he came up with. (He even froze the cake for 15 min. first (not enough, we learned) and microwaved the icing for a few seconds to soften it up!) 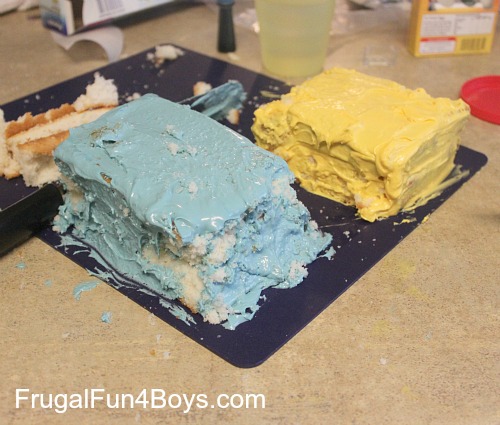 With just a couple of hours to go until our guests would arrive, my husband ran out to the store and bought some cupcakes. We had some LEGO® candles that I bought at Target, and Owen was completely happy with that! 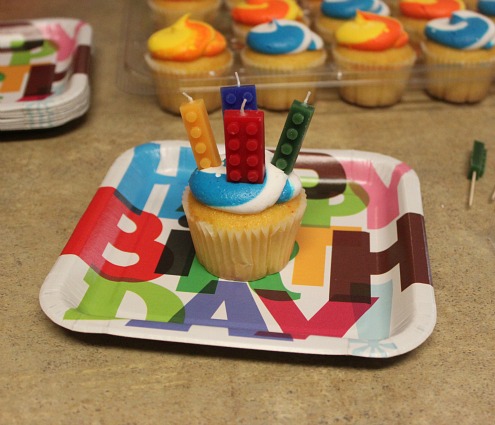 I think that Pinterest has really raised the bar as far as providing an image of what kids’ parties should be. There are pins of beautiful LEGO® birthday parties all over the place, like this Lego party. I don’t think there’s anything wrong with a fun themed party with decorations, but that isn’t every mom’s strong point! Cake decorating is clearly not my gift, and we don’t have the money to do a party as elaborate as many of the ones on Pinterest, and that is totally okay!

Owen’s party consisted of hot dogs with his grandparents and some friends of our family, gifts, and cupcakes from the store. Then the kids went out in the backyard and spent over an hour squirting each other with water guns. We had no decorations, not even balloons (which I usually do) because we spent so much time on that silly cake, and yet Owen had a blast! And so did his brothers and our friends! My experience has been that kids don’t care that much about decorations. Themed games are fun, but it’s just as fun to just get out a bucket of LEGO®’s and let the kids build!

If you’re tired of feeling inadequate because of all the beautiful things on Pinterest, you might want to check out this hilarious blog – Pinterest Fail! Pinstrosity is another great blog. This burning dandelion fail is a great one – have you seen the burning dandelion pin floating around? I almost did that one with my kids! I’m glad I didn’t!

What has been your child’s favorite simple birthday celebration? Or the best low-key party you have attended?