Last week, we husband went to jury duty for the first time ever. He was actually kind of happy to be summoned as he has never received a jury summons. I think I’ve been summoned 3 or 4 times, so I was happy it was him this time and not me! (Although in our county you can be excused from serving if you are the primary caretaker of a child who is under 12, which has been me for the past 11 years.)

Anyway, the boys were very curious about where Daddy was going. I realized that they knew almost nothing about how a court works, except what they learned on a Martha Speaks episode. (The one where Mrs. Demson’s patio furniture is ruined and Martha is the only witness – have you see that one?)

I was trying to decide how to teach them about a jury trial, and suddenly it came to me… LEGO®s! 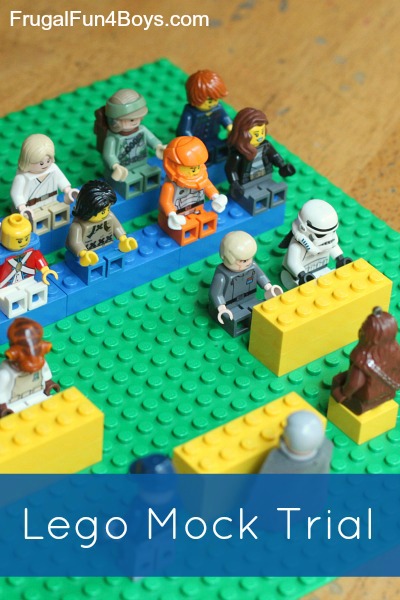 I asked Aidan to bring down a bunch of minifigures, and I set up a LEGO® court room. I decided to use Star Wars characters since they already go together in a story. It made it easier for me to whip up a court scenario!

We used Gandalf as the judge since he is impartial as it relates to Star Wars characters. I explained that the audience was made up of persons interested in the case – witnesses, family, and friends. The jury was seated in a separate area.

In this case, Han Solo vs. Storm Trooper, Han Solo was the plaintiff. Han Solo had made an allegation that the Storm Trooper had vandalized the Millenium Falcon, costing thousands in damages. Admiral Ackbar was representing the plaintiff as the prosecuting attorney.

The Storm Trooper was the defendant. An Imperial officer was representing him as the defense attorney.

We discussed the role of the bailiff – the Lego Cavalry figure. 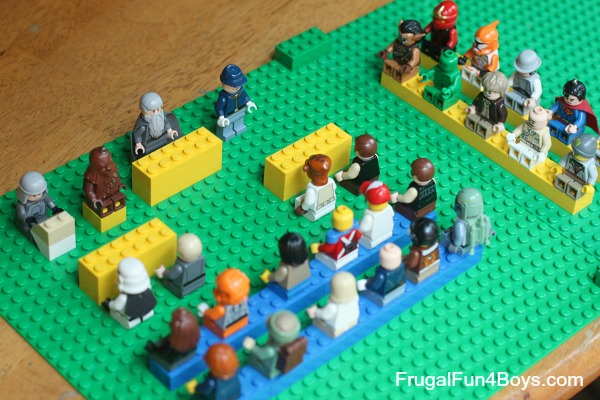 The prosecuting attorney called Chewbacca as his first witness. The boys howled with laughter when I acted our Admiral Ackbar questioning Chewbacca, who responded with only noises and grunts! 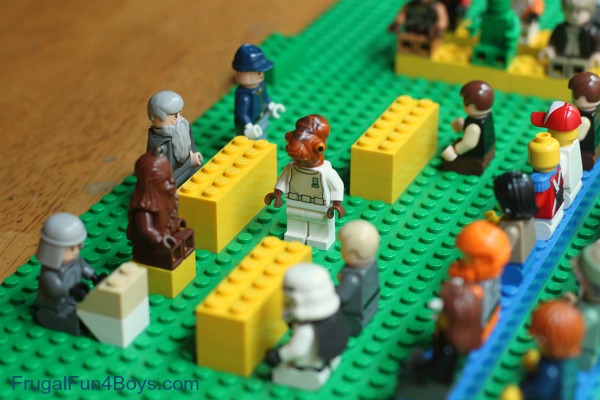 The defense attorney called his first witness to the stand. The court reporter typed away furiously as the defense attorney asked a worker from the hangar where Han Solo parks the Millenium Falcon if he had observed anything at all unusual on the night in question.

The prosecuting attorney asked the hangar worker about the length of his break during his opportunity to cross examine. The witness stated that he had been on break for 20 minutes from 2:00 a.m. to 2:20 a.m. He was watching the Millenium Falcon at all other times.

“Objection!” hollered the defense attorney. “This has nothing to do with the case!”

(We discussed that objection overruled means that the judge does not agree with the objection and questioning can continue. If an objection is sustained, an attorney must ask the question a different way or ask a new question.)

After the questioning was complete, the jury deliberated and found the Storm Trooper guilty as charged. The judge announced a sentence.

Other vocabulary that we covered: misdemeanor, felony, appeal, acquitted

The definitions that we used for our vocabulary words came from this site and this site. Very useful! The first site also has lesson plans for a mock trial using the story of Hansel and Gretel.

Gresham (age 8) was not quite ready to do a whole mock trial, but Aidan (11) would have loved to. It would be fun to do a real mock trial with a class or a homeschool group! Assign roles and let each side prepare to present their case!