Take Easter egg decorating to a whole new level with this fun LEGO® machine! The machine spins the egg so that all you have to do is hold the marker and it draws straight lines. (Well, relatively straight.) Oh my goodness, this was such a fun project! It would make a great engineering challenge for a class or LEGO® club.

The other day, we saw a video on Facebook for an egg decorating toy that works the same way as this LEGO® machine. Well, actually it probably works better. But the toy was sold out, and at $20, it probably wasn’t worth it anyway. We had the idea to try creating a LEGO® version, and it ended up being a fantastic engineering challenge that we all enjoyed. The kids have had a blast decorating eggs with a machine that we built ourselves!

We used the LEGO® Technic Power Functions set to power up our egg decorating machine. If you don’t own this, I highly recommend it. Don’t be scared off by the Technic name! We have only ever purchased one Technic set, but we have a lot of Technic pieces that have come in various sets such as Star Wars sets or the Crazy Action Contraptions set. You’ll need some x-shaped axles and gears to use with the motor, but you can order those on Brick Link if you don’t have them. We tried creating a version of the machine that could be operated by hand, but it just wasn’t the same. Plus, the power functions set can be used to create all kinds of other projects. 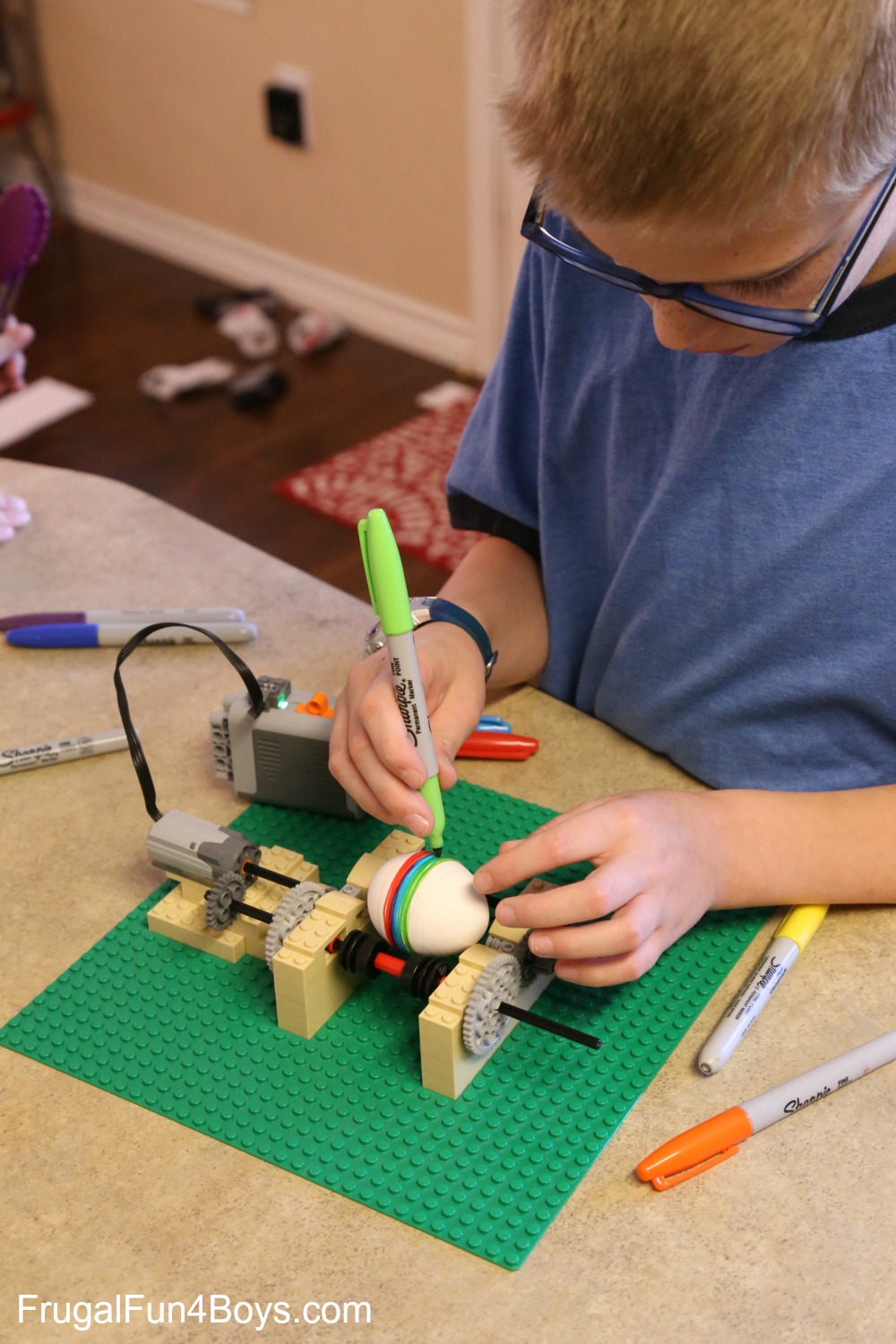 Here’s a video of the egg machine in action:

Ready to build one? Here’s what you’ll need:

Basic bricks for building the frame

Step 1: Build the frame. It has 3 layers of basic bricks,and then the layer with the Technic bricks. 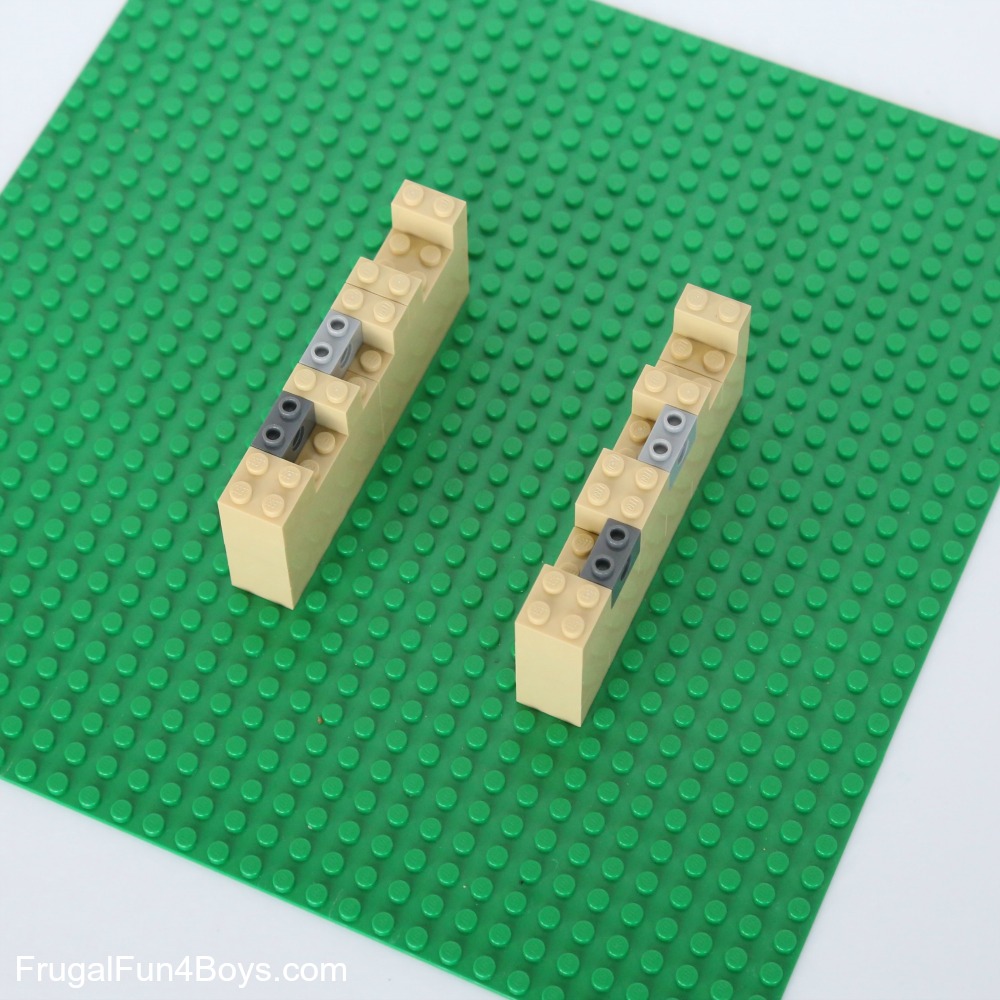 Step 2: Build the first axle. This is a 12 stud axle with two Technic wedge belt wheels. If you don’t have these wheels, experiment with what you have. 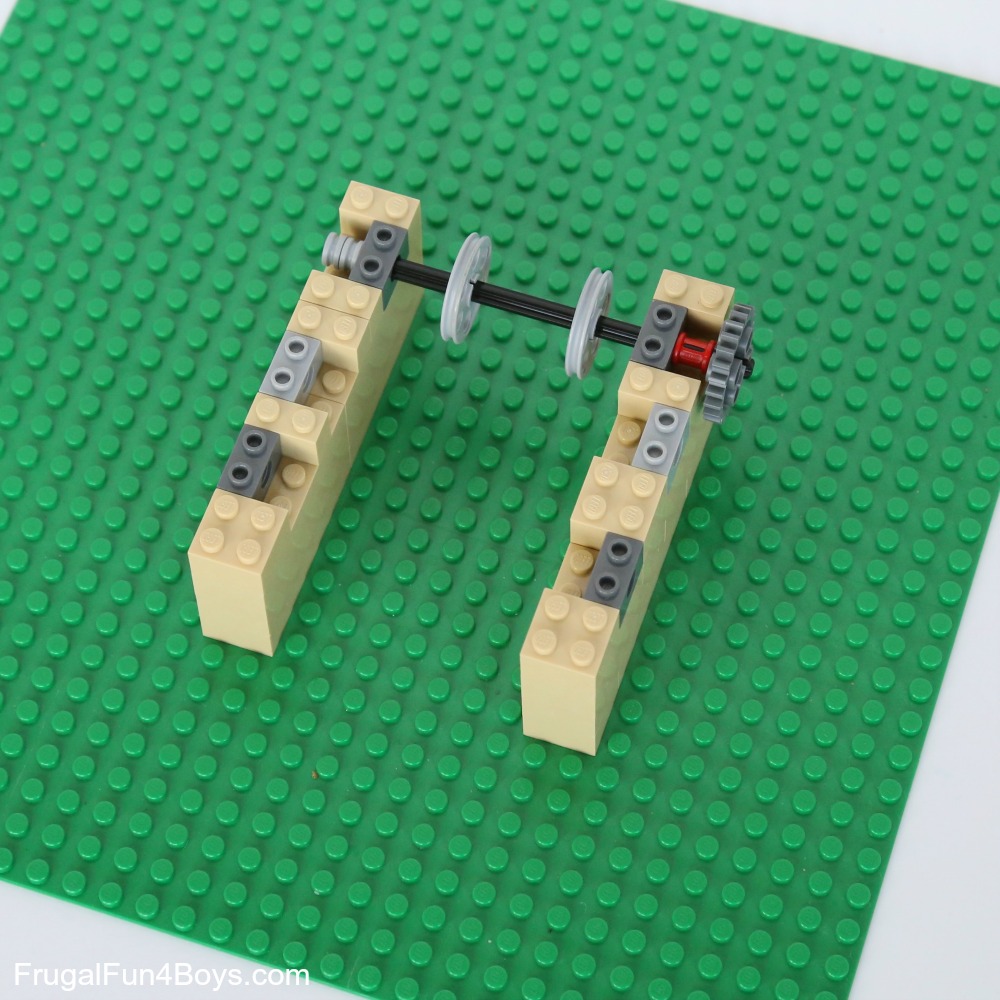 The two sections join together with the red connector. You’ll need to put the axles through the Technic bricks on the frame, however, before adding all the other stuff. This photo is just to show which pieces we used. 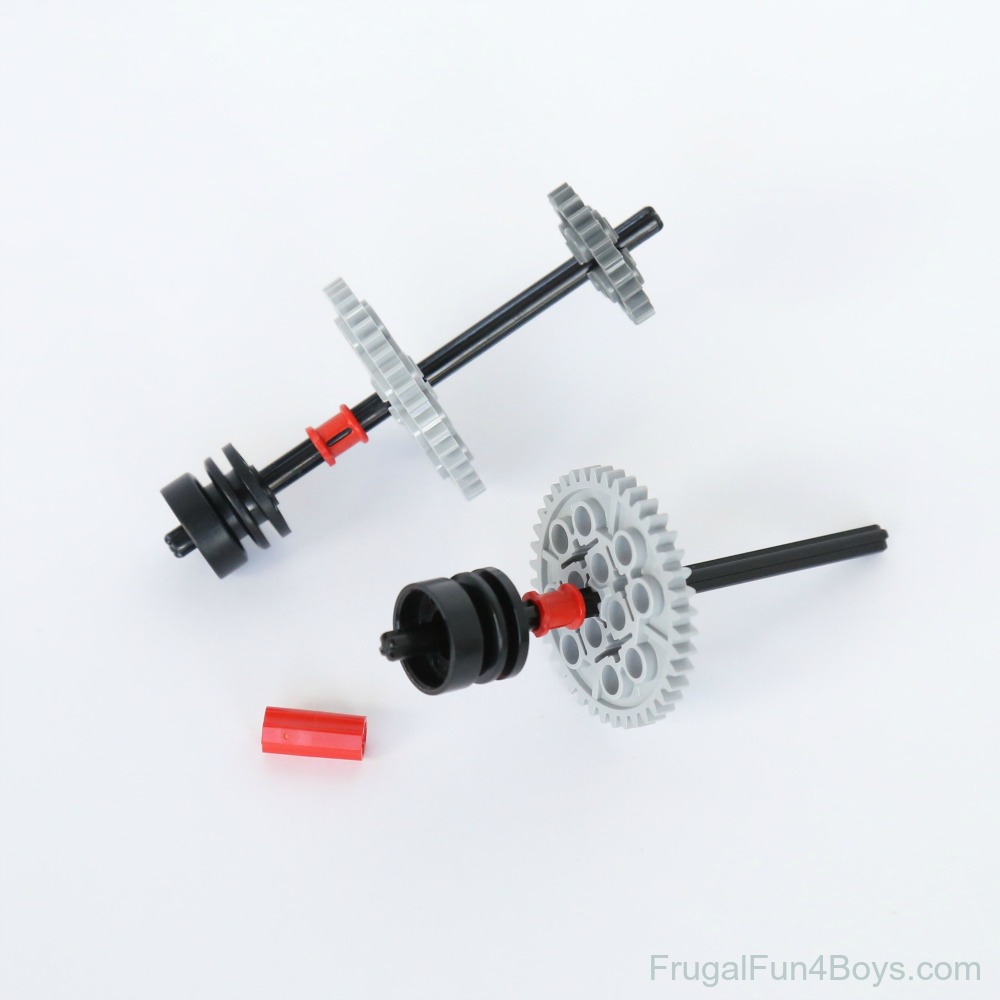 The only function of the gear on the far left is to make it easier to turn by hand. You can leave that one off if needed. 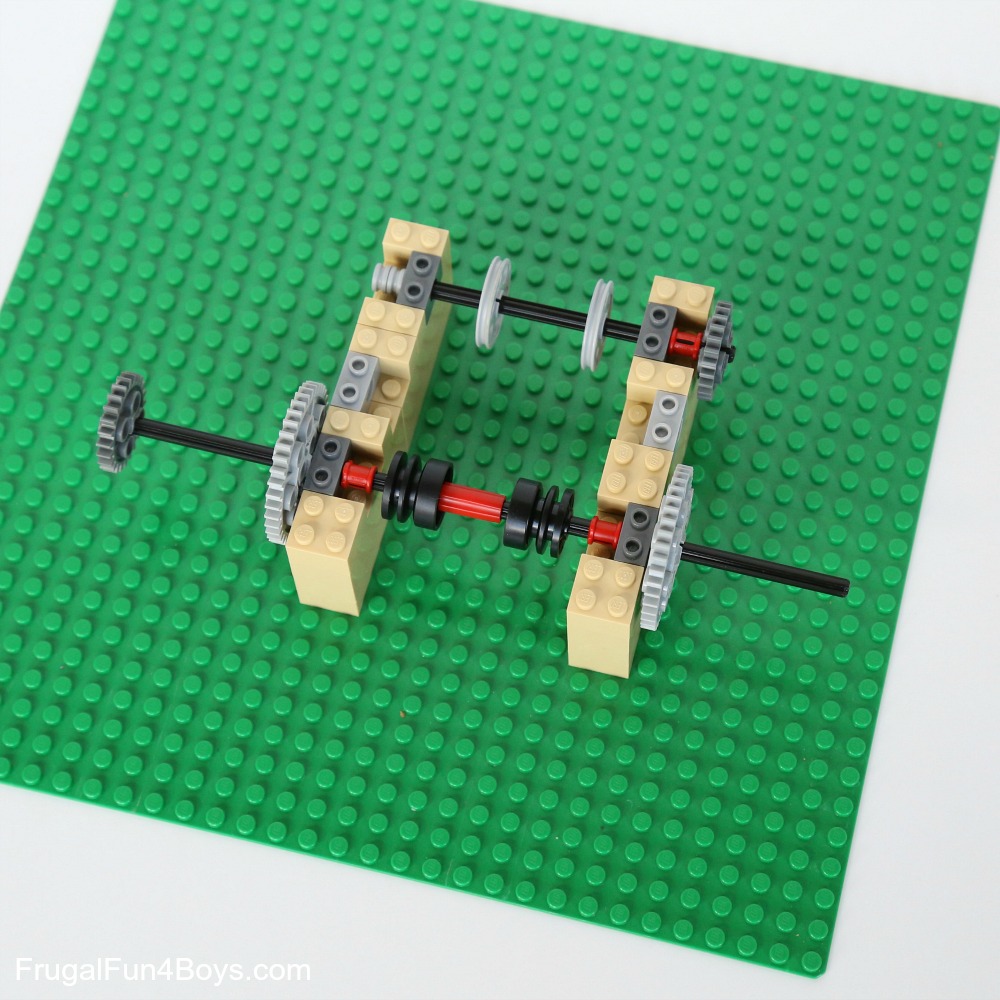 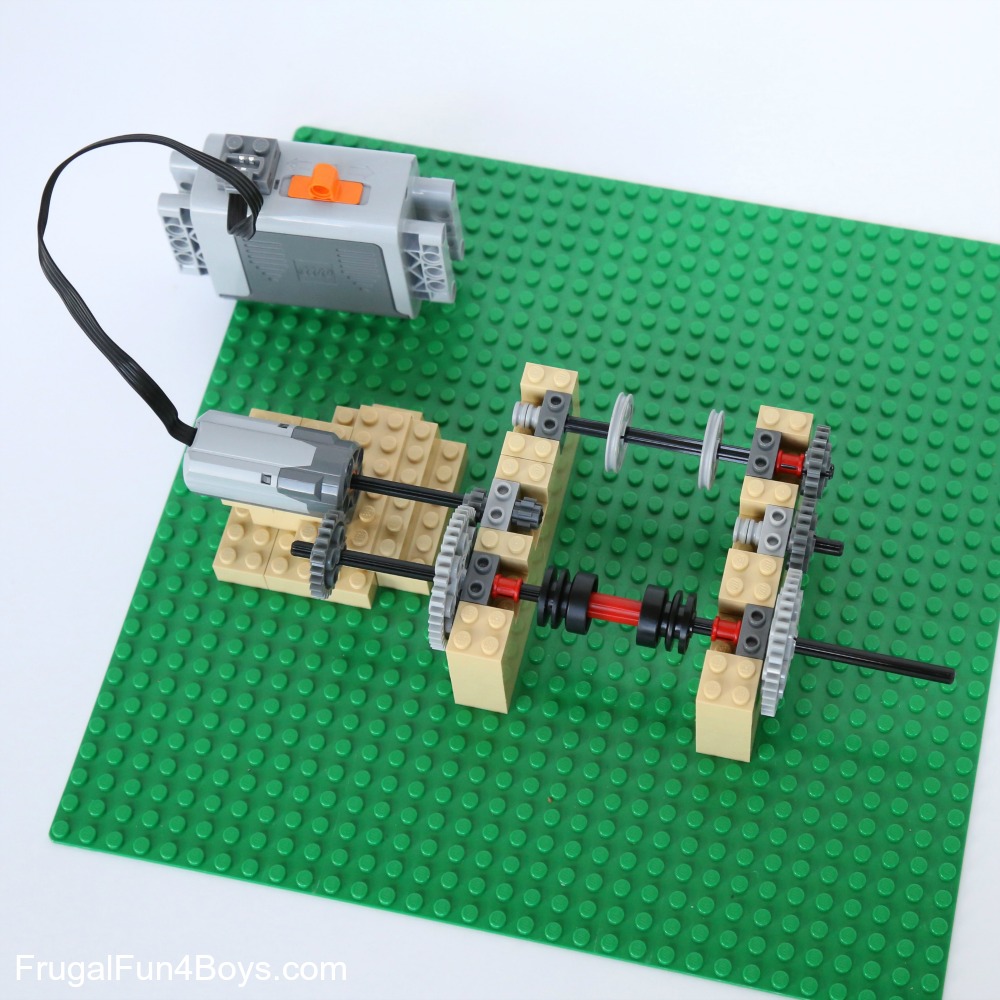 The egg needs a little guidance to sit securely in the machine. We added four 2 x 4 plates (flat bricks) and four 2 x 2 slopes to the top of the machine. 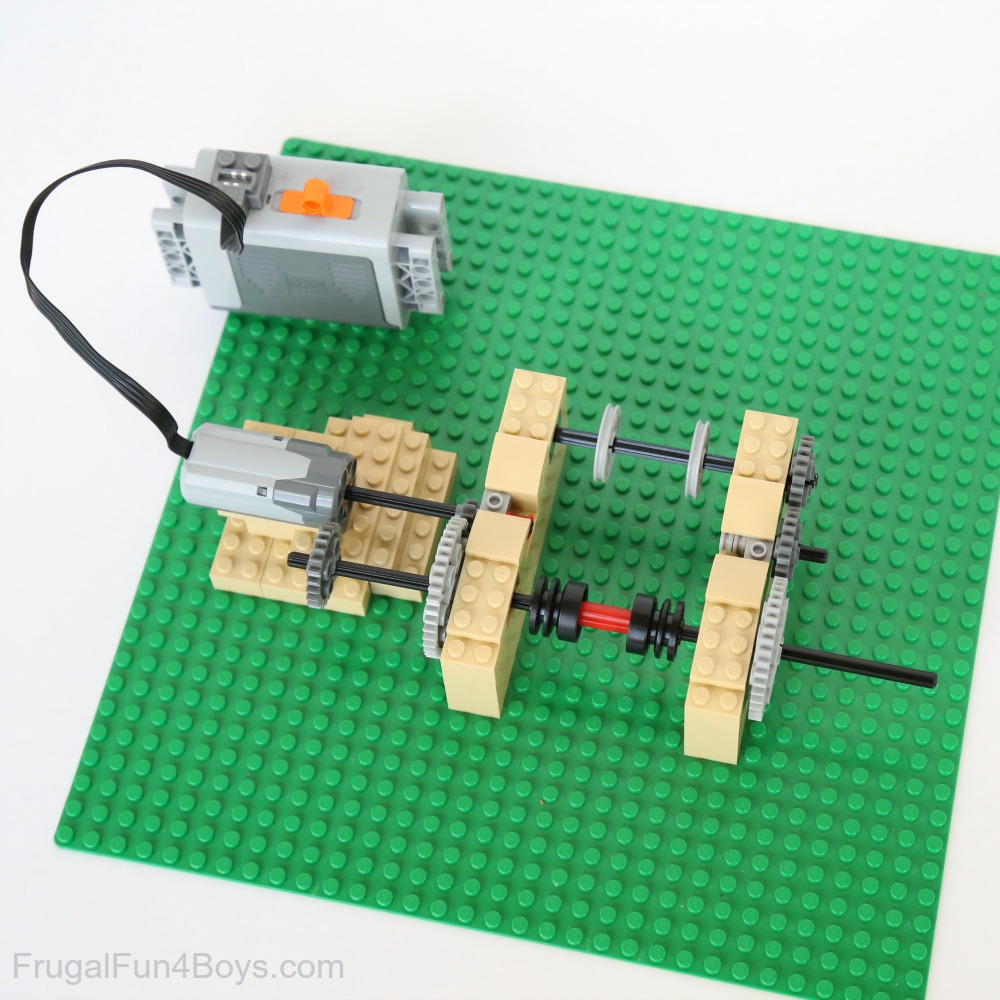 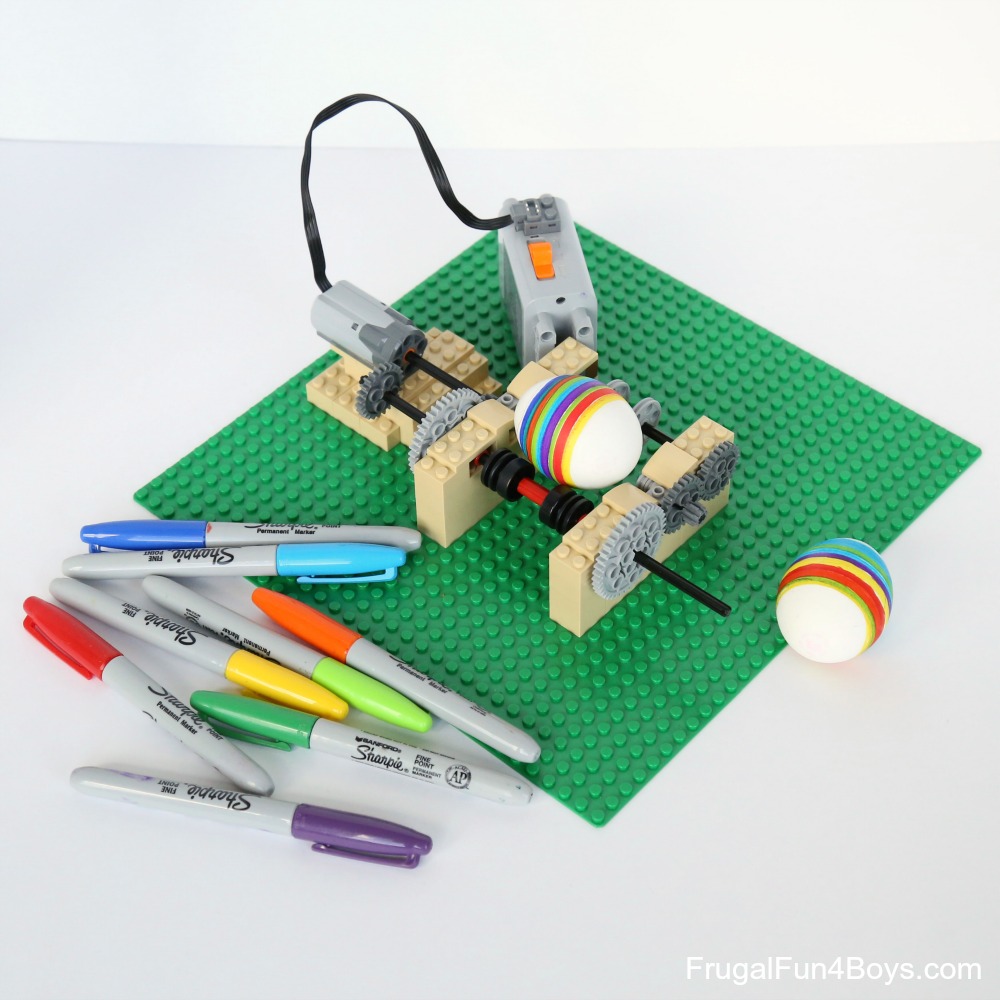 Have fun decorating eggs! If your family builds a LEGO® egg machine, we’d love to see a picture of it on our Facebook page!

Our 5 year old couldn’t hold the pen still enough to make nice even stripes, but that didn’t bother him at all. He chose to just do wavy stripes, and it turned out so pretty! 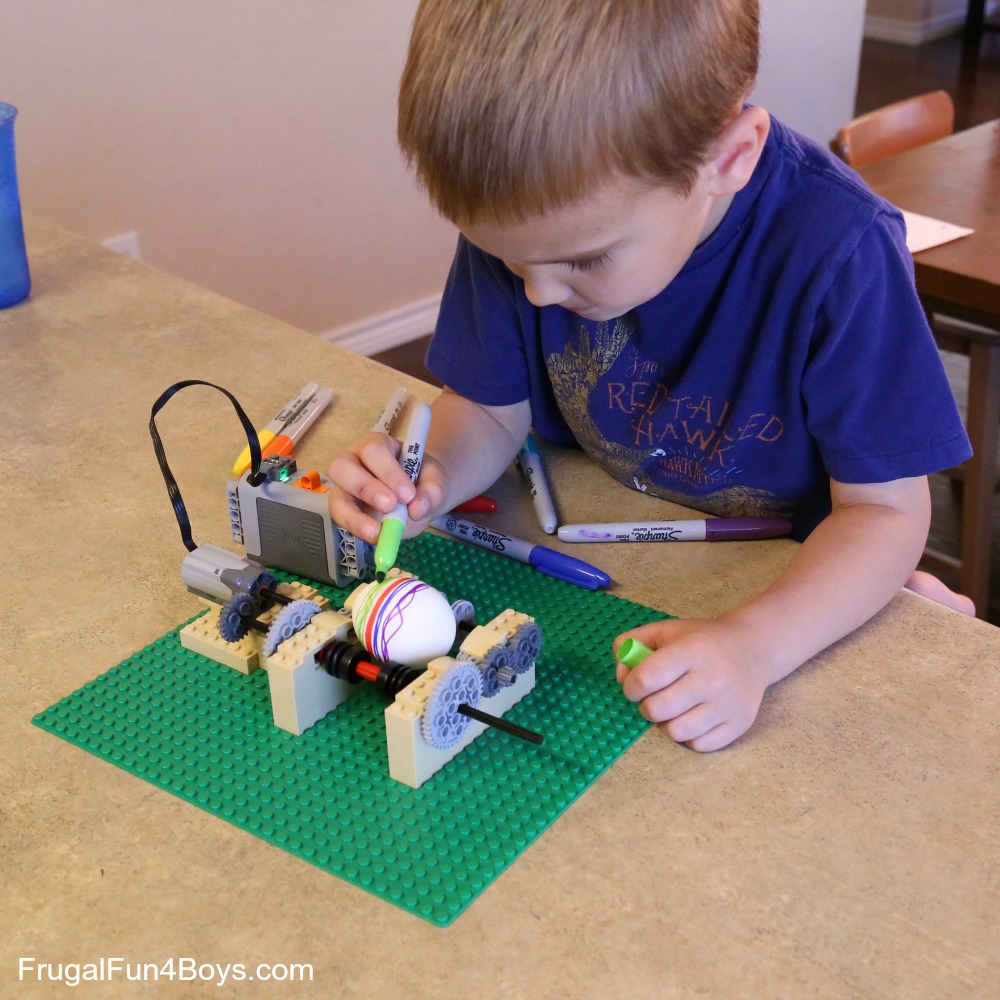 Here are our finished eggs, decorated by kids ages 5-13: 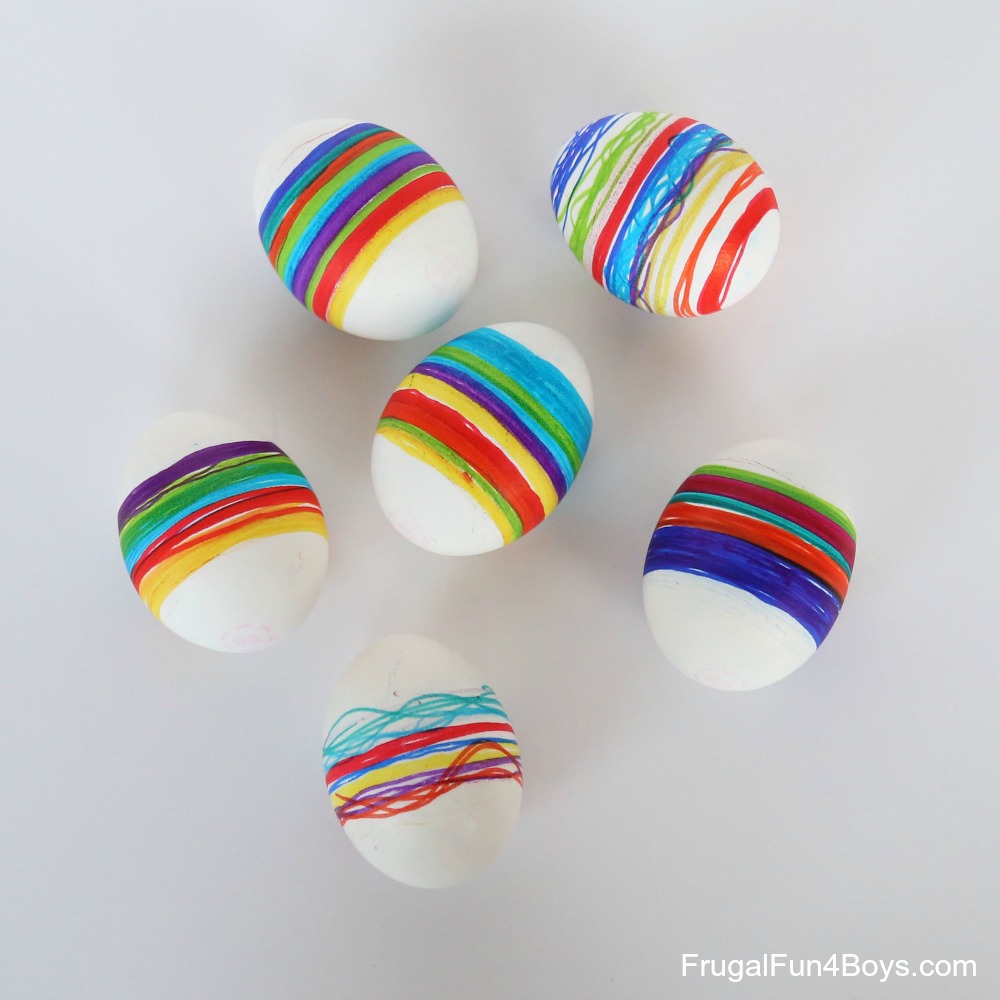 They look pretty in an Easter basket! 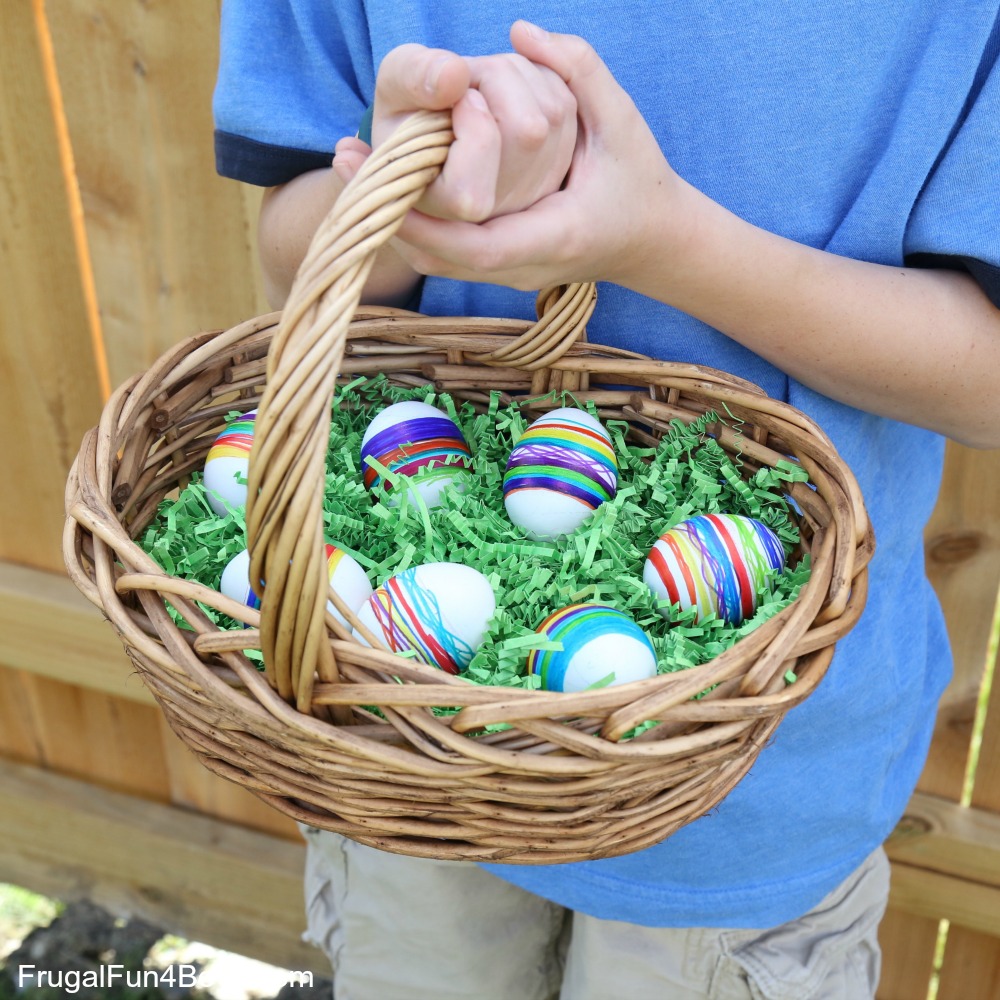 If your kids love getting new ideas for LEGO® projects, you’ll want to check out our LEGO® book! The title is Awesome LEGO® Creations with Bricks You Already Have, and it has 50 new projects with instructions for most. Build vehicles, animals, a working candy dispenser, and more!