I don’t know what your kids are like, but mine sometimes struggle with getting out bunches of toys and then not doing anything with them except acting wild. I have named this phenomenon “toy dumping.”

Toy dumping is when they pour out bucket after bucket of toys looking for something fun to do. They get out all the Little People and play with them for 2 minutes. Then they get out something else. They play with that for 2 minutes. Then they go back to the Little People and instead of playing with them, someone drives a toy truck through the whole mess, sending little parts flying in all directions. A brother laughs at the destruction, and the wildness grows…

Here is something that has helped us, especially with LEGO®’s: 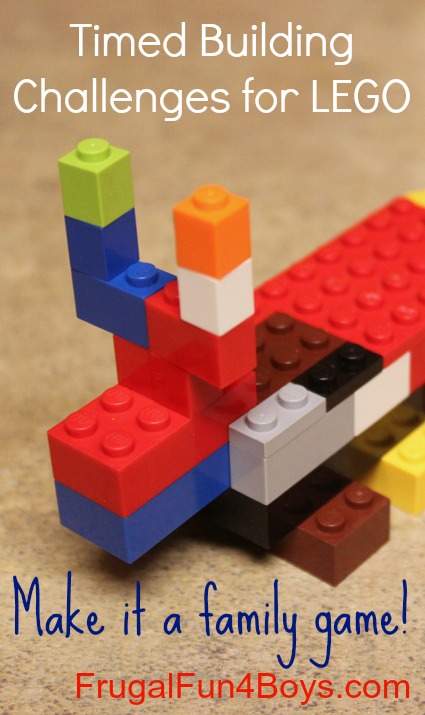 When it seems like all the boys are doing with LEGO®’s is using a toy backhoe loader to scatter them all over the place, it’s time for this game!

I give everyone a small pile of Legos. Mainly basic blocks. Dad and I play along.

Then we announce the object to be built in this round of the game. We can only use the pieces in our piles! Today, round one was a vehicle. When I announce that time is up, we all show what we have built.

They come up with amazingly creative constructions with very few blocks! It’s fun to see what everyone has built.

Round 2 was an animal. This is my duck next to Gresham’s (age 3) blue alligator.

Aidan (age 7) made a giraffe in the animal round.

After two rounds of the game, the boys had all kinds of ideas of things that they could build, and they happily (and calmly!) built with LEGO®’s until it was time to go out to the grocery store.

For preschoolers, use duple LEGO®’s, and it will work just as well.