This post was originally written in December 2016 and updated January 2022.

One question that I get asked regularly since writing my LEGO book is how do we organize our LEGO® bricks?  How do we avoid spending hours (on our hands and knees) hunting for one specific brick?  Well, Christmas is over and kids everywhere probably have lots of new LEGO® sets, so I figured this was a good time to answer that question!

First of all, I’ll start with a couple of tips.

Organizing and cleaning up are two different things.

Are you having trouble getting your kids to clean up all the way?  Are there little LEGO® bricks here, there, and everywhere?  If kids just aren’t keeping their LEGO bricks picked up, and you know they are capable, don’t just take away the pieces they leave out. Those are the pieces they don’t care about! Instead, try putting away ALL the LEGO for a period of time. A week, two weeks, etc.

So… 1.  Make them clean up.  But, 2.  Realize that you are going to need to drive a system of organization for toys, especially if your kids are under age 10.  They need to be responsible, but being able to take the lead in that takes years of character development.

The big question when organizing loose LEGO® bricks (we’ll deal with sets and mini figures farther down) is should I organize by color? Or organize by shape? Or by set?

If your goal is to keep each set separate, I would recommend doing one plastic box to store each set and instruction manual.

We have never taken this approach, however. While some sets are collectible and we never take them down, I don’t prefer a rigid approach to keeping sets separate. In my opinion, that makes kids less inclined to be creative and build their own creations!

There are pro’s and con’s to any organization system.  Sometimes we want our bricks organized by color for the most efficient building.  For example, when I was creating the monkey project for the book, I wanted a whole bunch of brown bricks in different shapes so that I could tinker with the design. Then there are other times when we want to design a project (like our circle drawing machine) where the function of the bricks matters more than the color.

The best way to organize for the most efficient building would be tons of little drawers so that bricks could be separated by color and then by type.  But the drawbacks to that system are expense and upkeep.  Who has time to keep a highly structured organization system under control, especially if you have multiple kids and the kids don’t care about organization?! 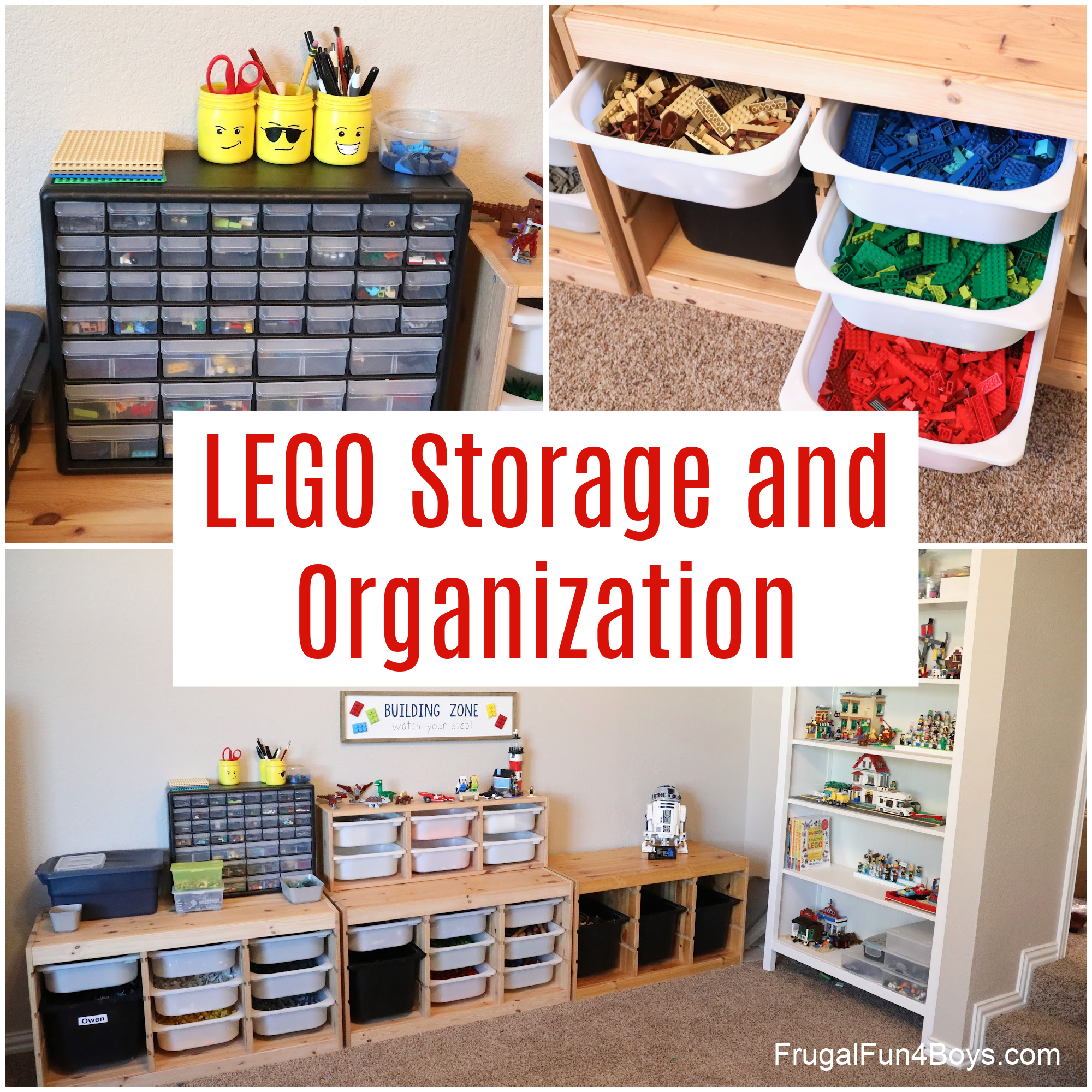 So here’s our system for organizing LEGO® bricks.

(Scroll to the bottom for a video tour of our LEGO room!!!)

I feel like it’s practical and makes building as efficient as it can be without spending a fortune on storage or spending all our time keeping it organized.  We do still spend time searching for bricks – but it’s better than it would be otherwise.

The photo below shows our family LEGO® area.  The kids also have their own LEGO® sets, which we’ll discuss in a minute. Yes, we own a lot of LEGO®.  LOTS AND LOTS OF LEGO®… 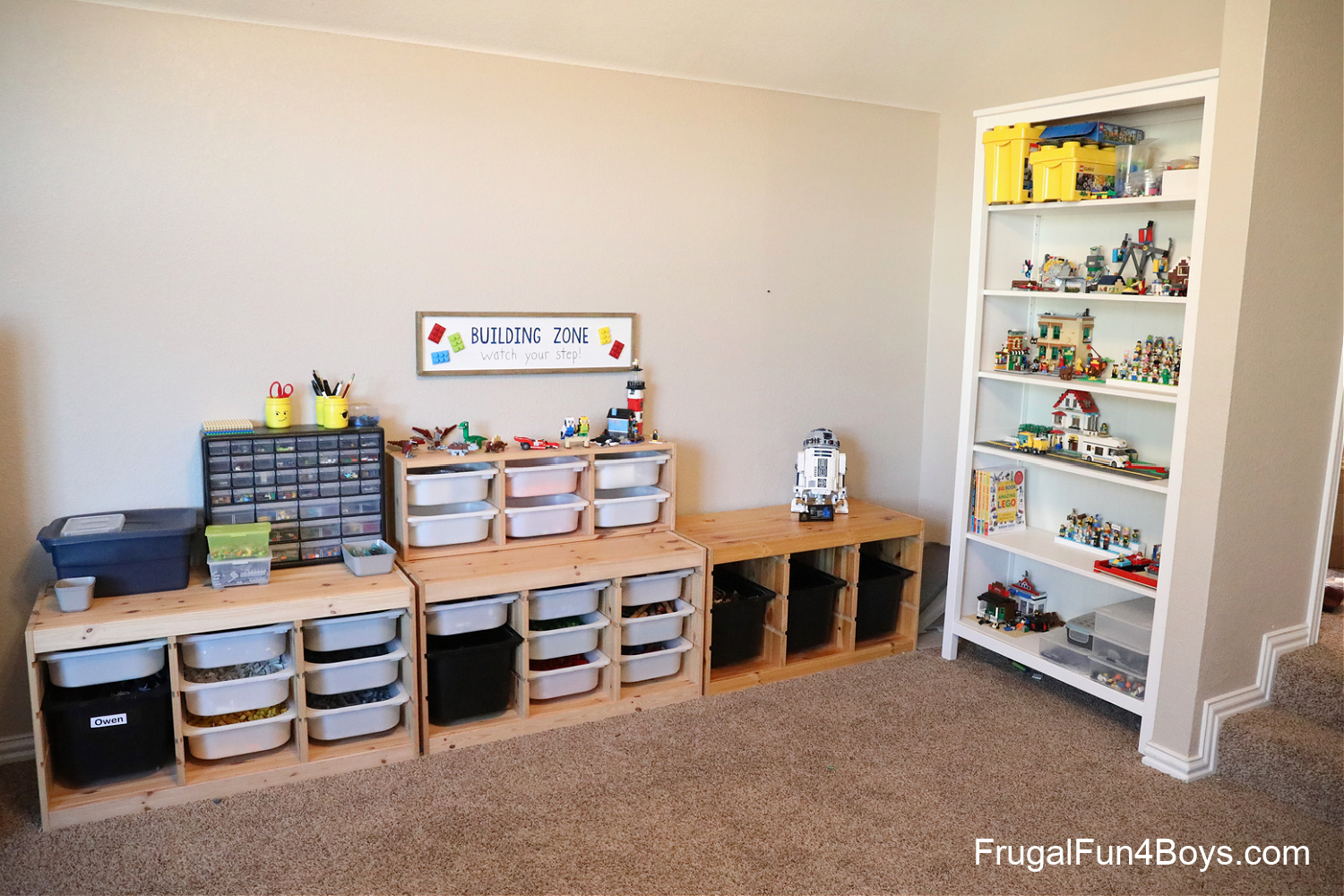 The white bookcase holds projects that we are currently working on for books or our website. It also holds brand-new bricks that I have ordered for business purposes (book projects, etc.).

Our family LEGO® bricks consist of sets that were taken apart and the kids lost track of which pieces were theirs, plus basic sets we have purchased as well as bricks from the brick wall at the LEGO® store. And orders from Brick Link. Etc, etc, etc.

We use IKEA Trofast storage.  We have two units that are just for LEGO bricks, and then the third one holds Hot Wheels cars, Lincoln Logs, and animal toys.

This area holds the bulk of our LEGO® bricks.  Each of the boys has a large black tub for their own sets and random pieces. 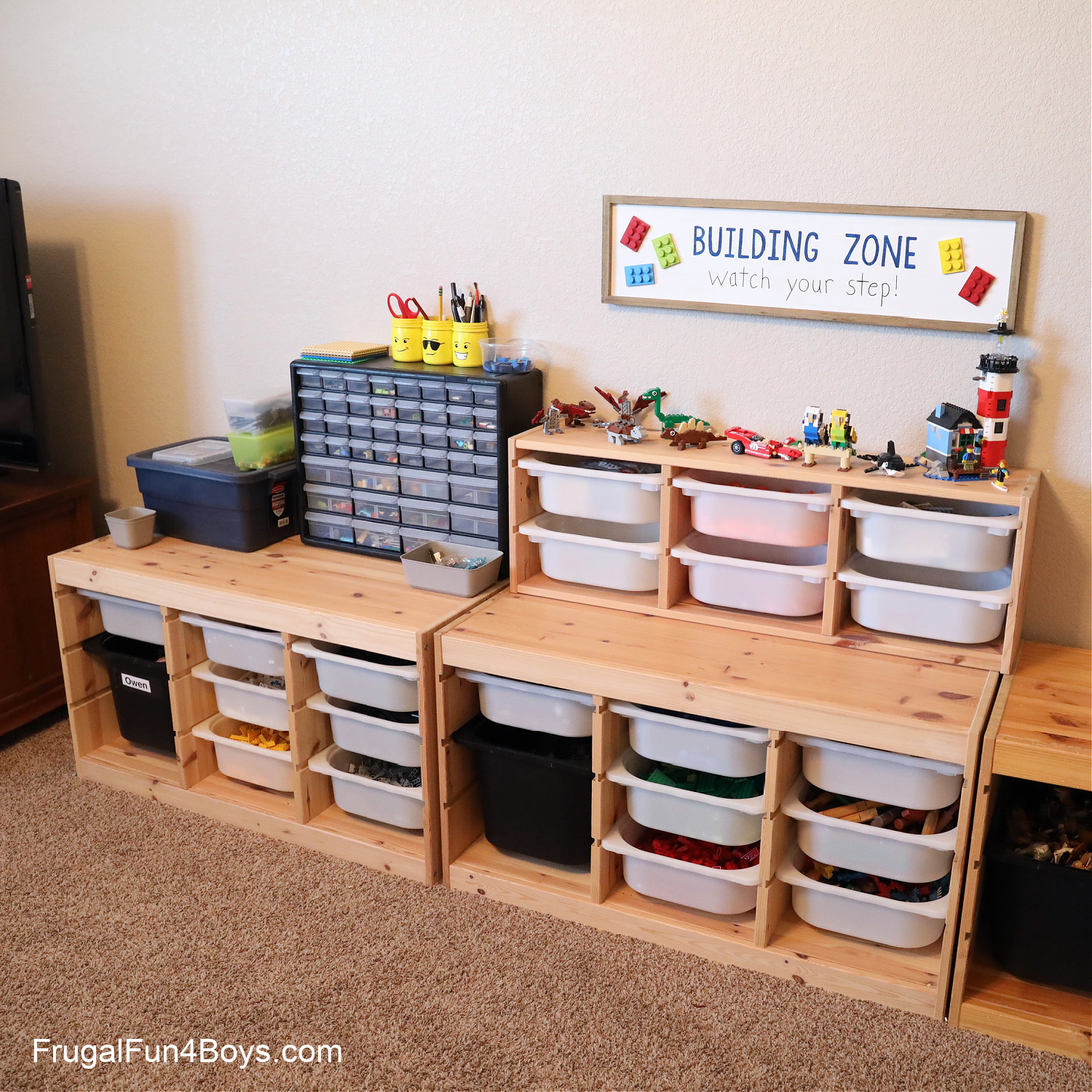 The rest of the bricks are organized by color.  We have bins for light gray, dark gray, white, black, blue, green, red, yellow, and tan/brown together. Then we have smaller bins at the top for orange, and pink/purple together. 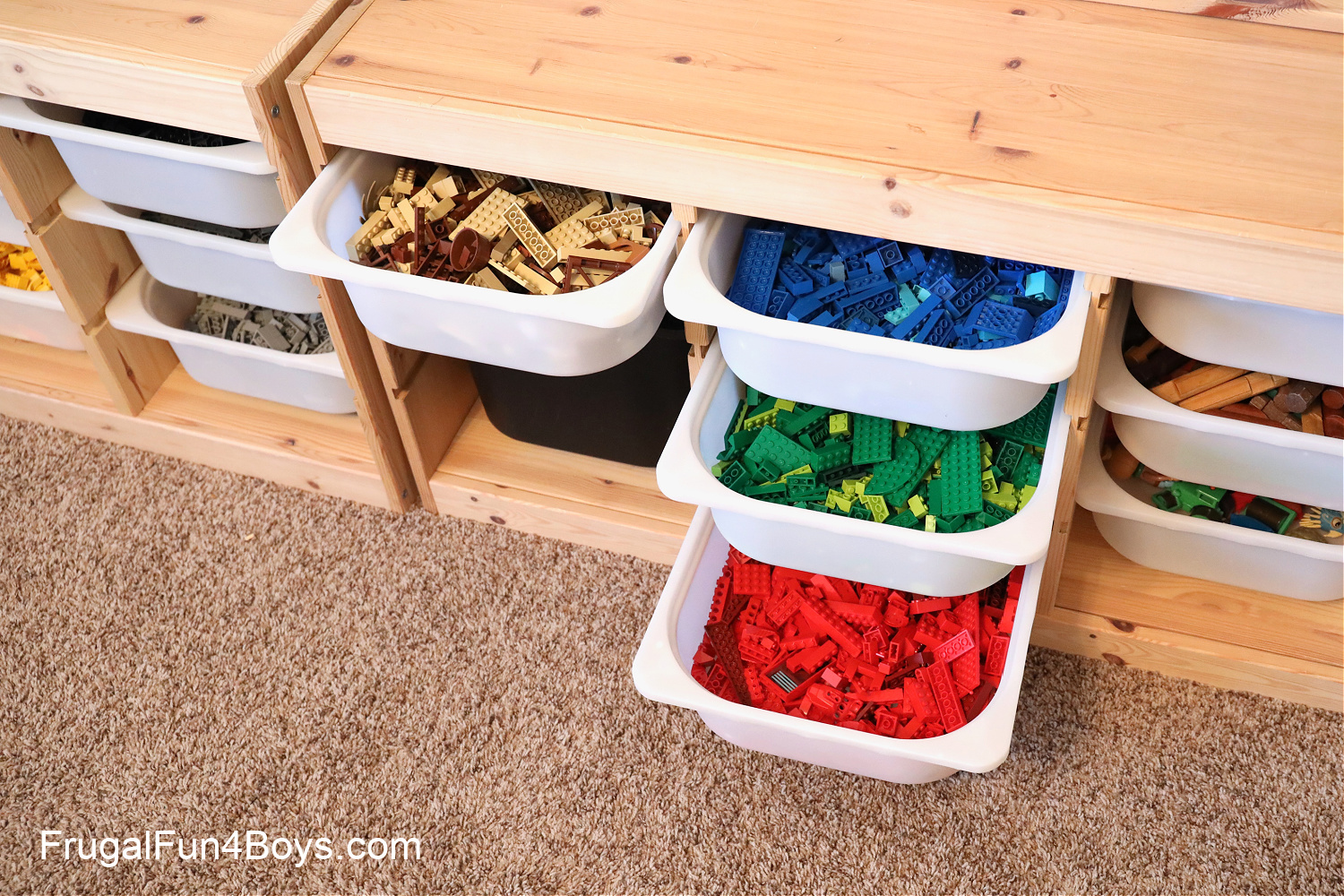 The smaller Trofast drawers hold orange, pink, and purple bricks as I mentioned earlier. The other ones hold plant and tree pieces, plates (flat bricks), and round bricks of all sizes. 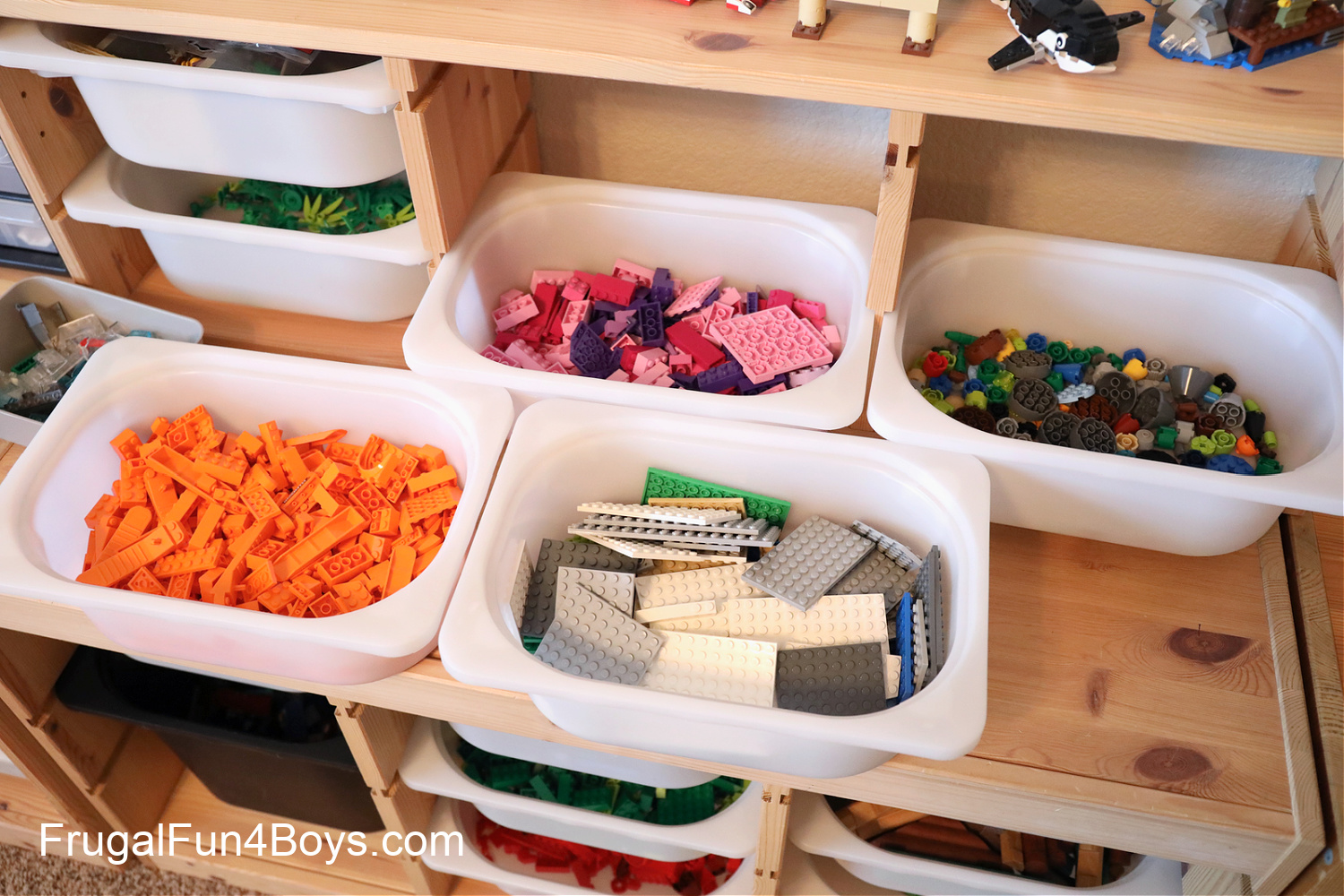 Now, depending on how detailed you want to be, you could easily break this down further…

How to Organize by Type of LEGO Brick

A couple years ago, we decided that we needed smaller bricks organized by type. We were tired of digging for joint pieces (those ball and socket joints), wheels, turntables, etc. One day, my husband ordered this tool box on Amazon. It has been the perfect thing!

Our is an Akro Mills Drawer Organizer. The exact one is no longer available, but this IRIS 44 Drawer Parts and Hardware Cabinet has the same number and size of drawers.

Here’s another option – this Akro Mills Drawer Cabinet has 24 larger drawers (the size of the bottom drawers on our unit).

Or, this Akro Mills Drawer Hardware Cabinet has 64 small drawers. 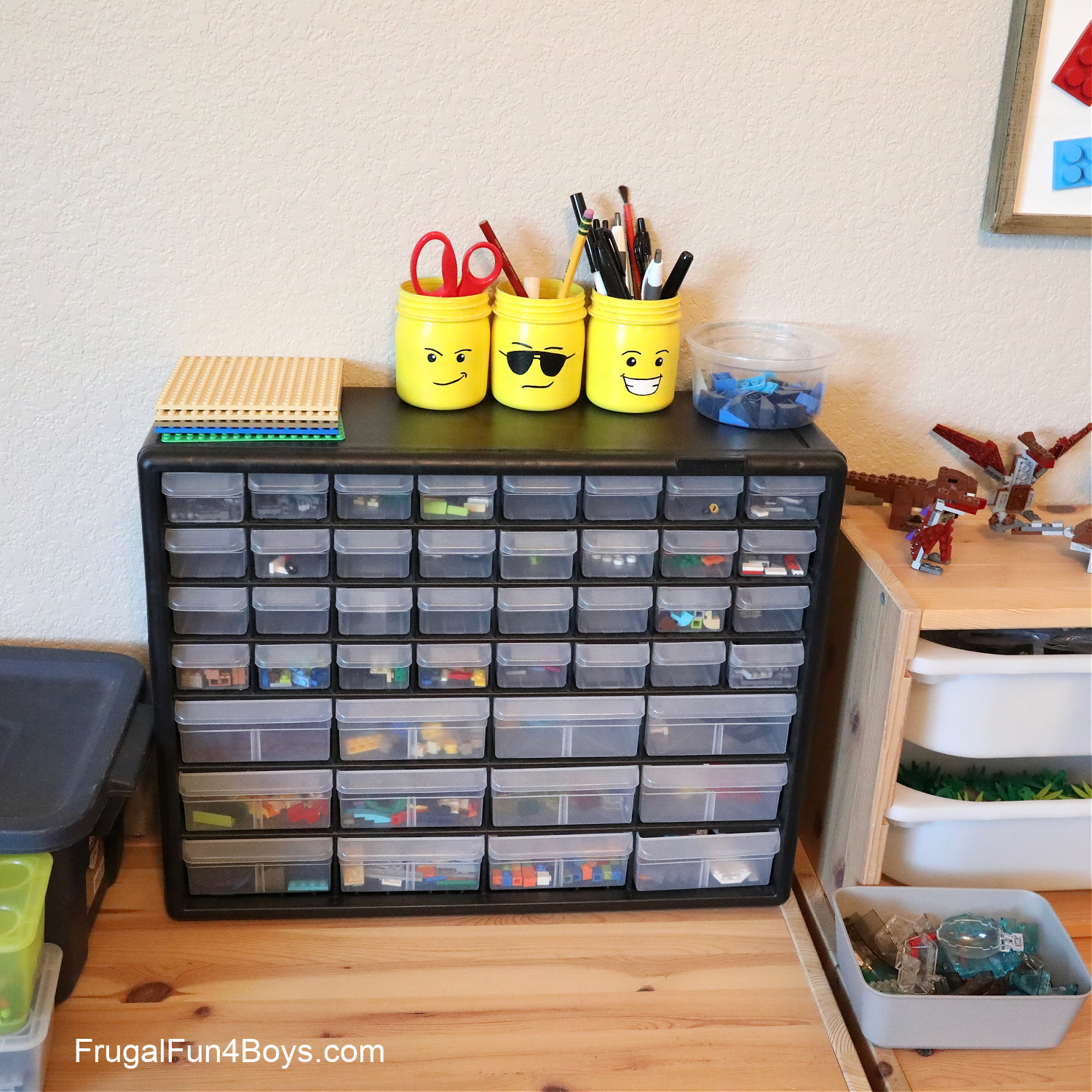 There are 32 small drawers and 12 larger drawers in our cabinet.

The small drawers are perfect for holding little things like this. From left to right, we have wheel holders, bricks with brick lines, antennas, and turntables. We also have little drawers with eyes, steering wheels, grills, 1 x 2 slopes, and more. 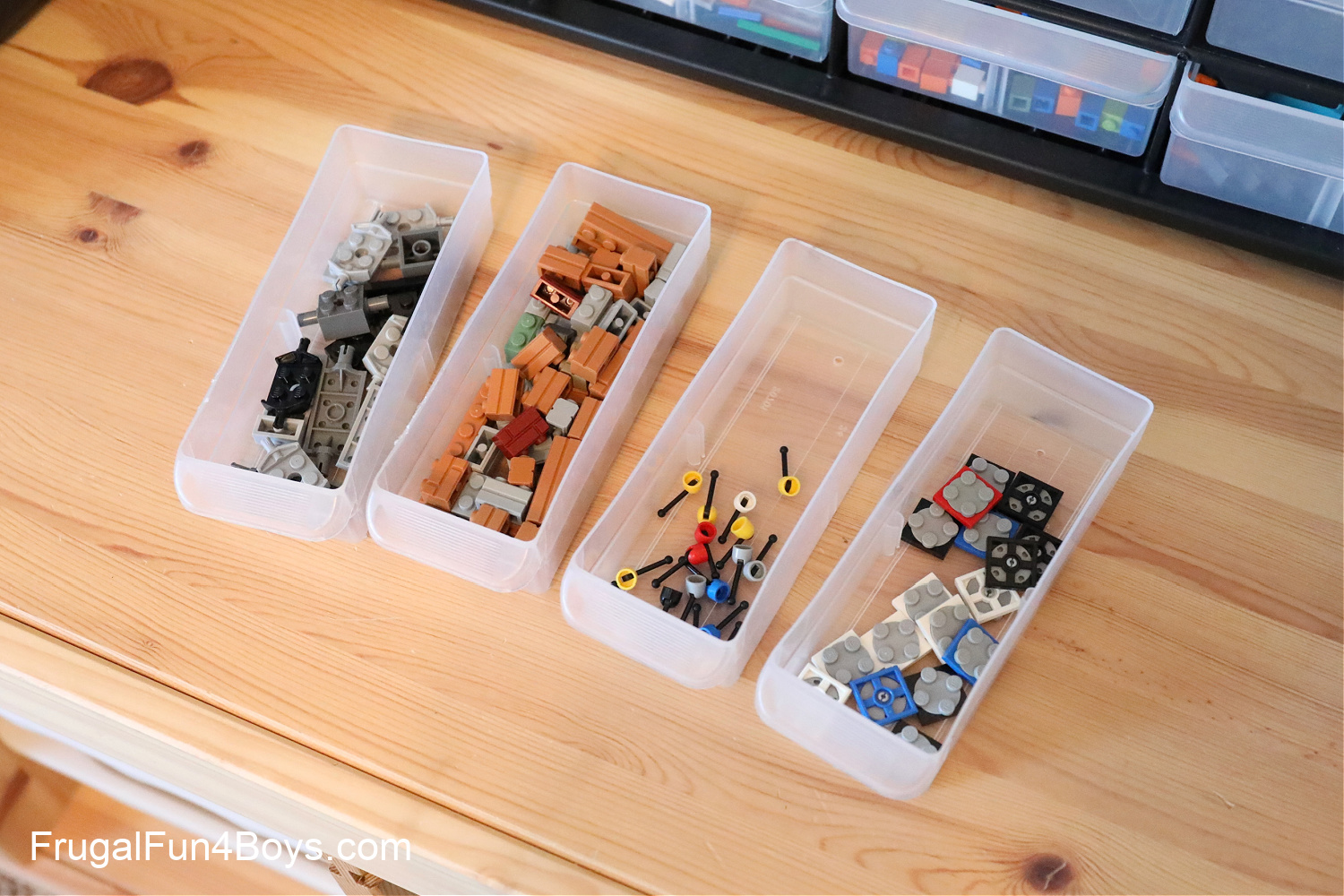 Then the larger drawers work well for tiles, windows, chairs, translucent bricks, etc. We have one drawer dedicated to bricks that have a stud on the side – another thing that is a pain to dig for. 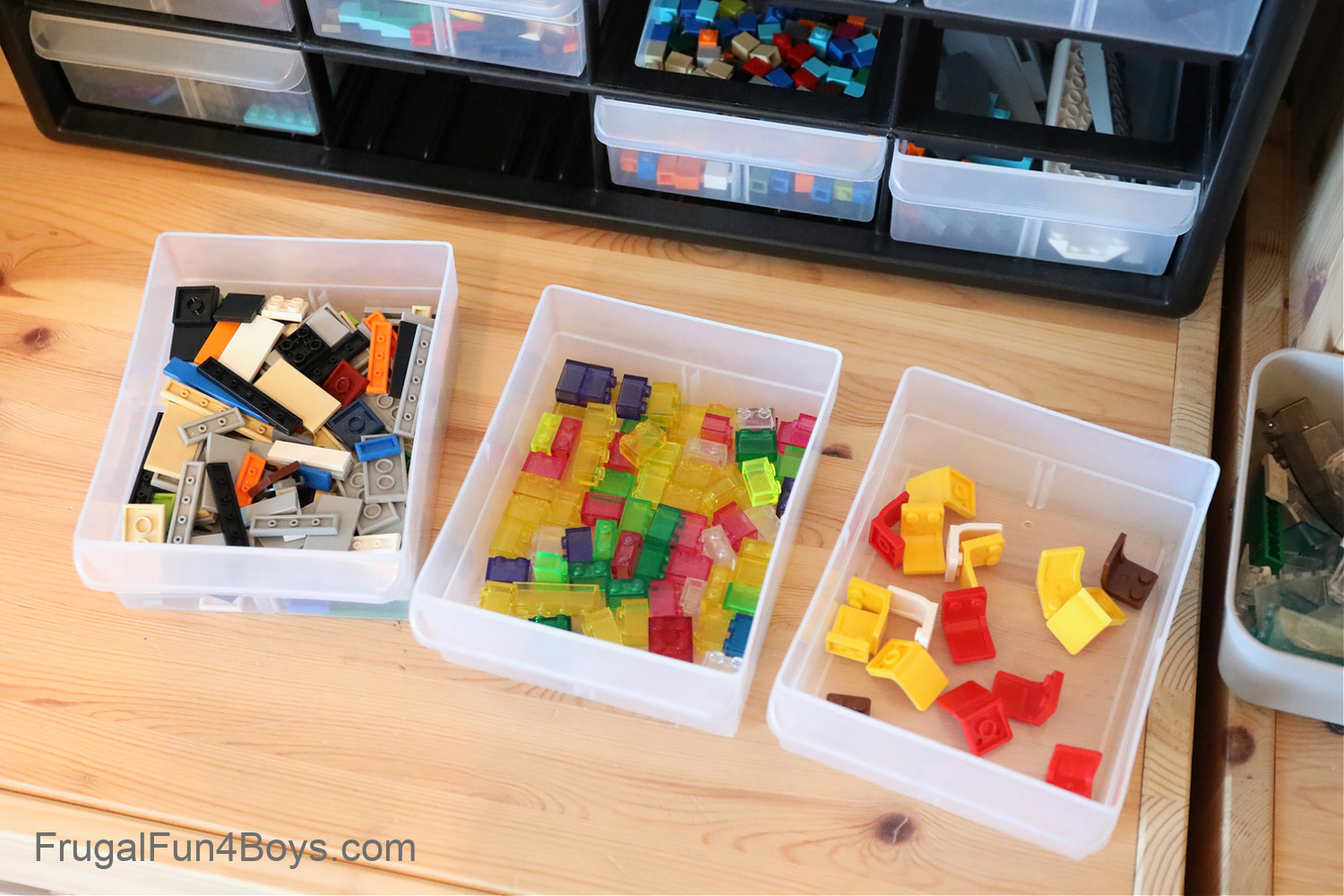 Here’s what makes our system work. 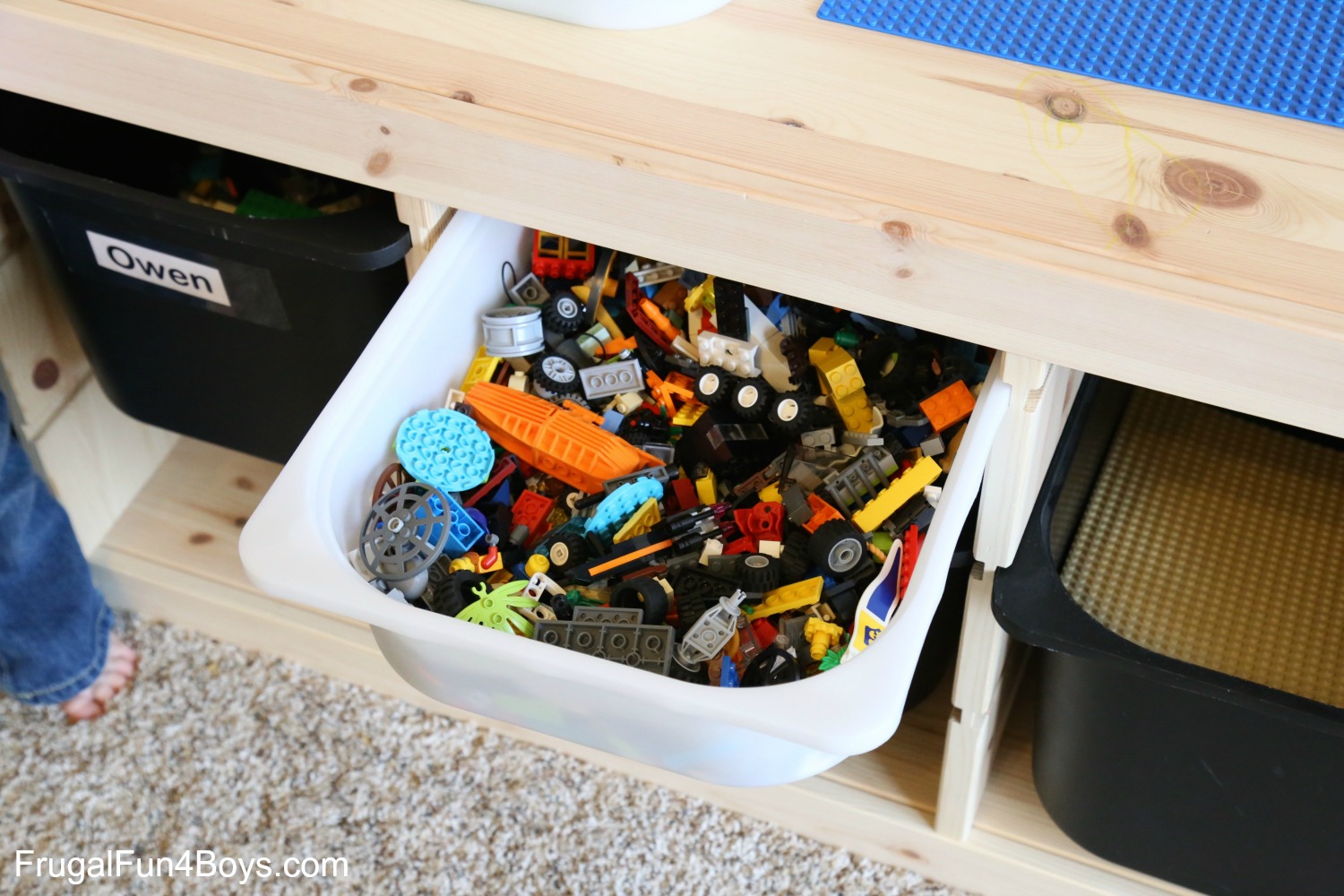 How to Display LEGO Sets

So that’s the community LEGO® bricks.  What do we do with minifigures and sets that we display?

Each of the boys has:

Our four boys are in two bedrooms, with two boys in each room. Each one of them has an IKEA bookshelf for storing books, but mostly LEGO sets! (Don’t worry – we own plenty of books. They are in our homeschool room!)

How do you clean LEGO sets?

LEGO sets collect a lot of dust! We dust ours with paintbrushes (kids watercolor brushes) and canned air. This works really well. Canned air gets expensive, so we do paintbrushes first to get rid of dust in cracks and crannies, and then we spray canned air to clean up the set. 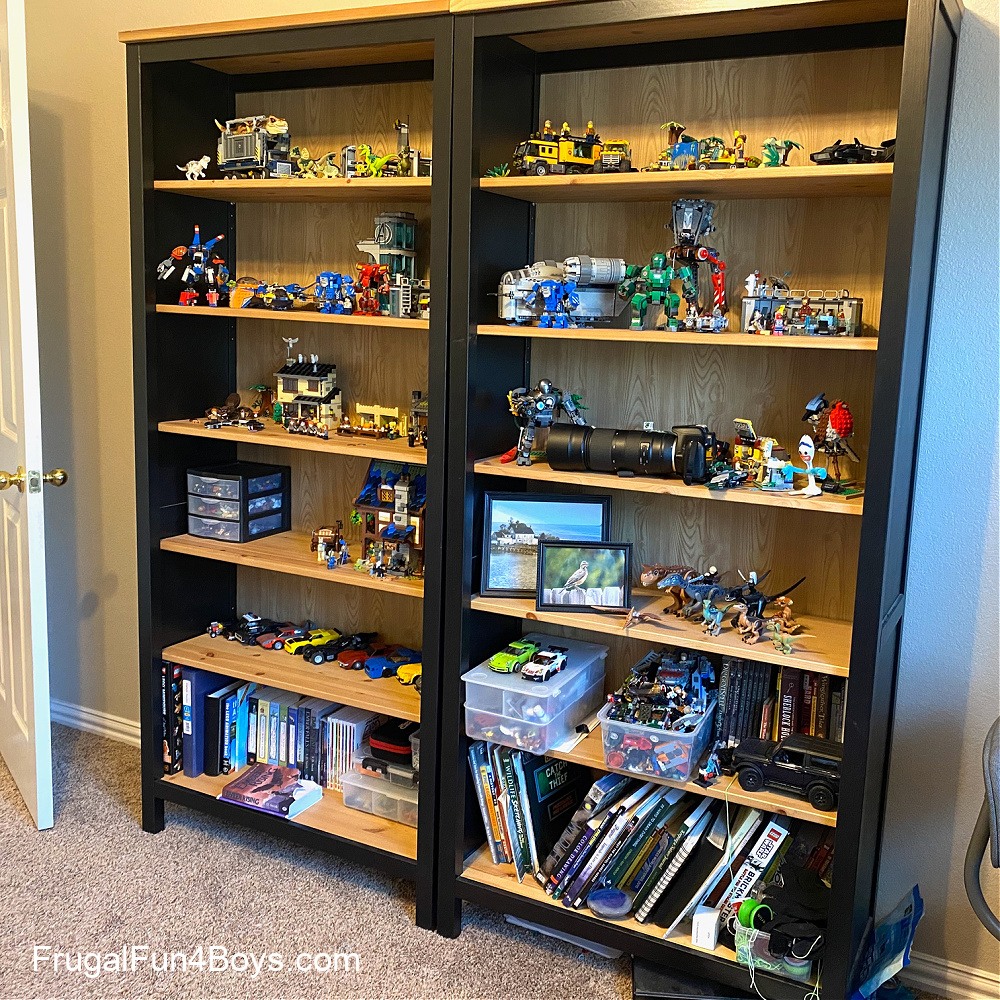 The IKEA Glis boxes are awesome or organizing mini figures and accessories, and at $3.99 each you can’t beat the price! Sturdy too. 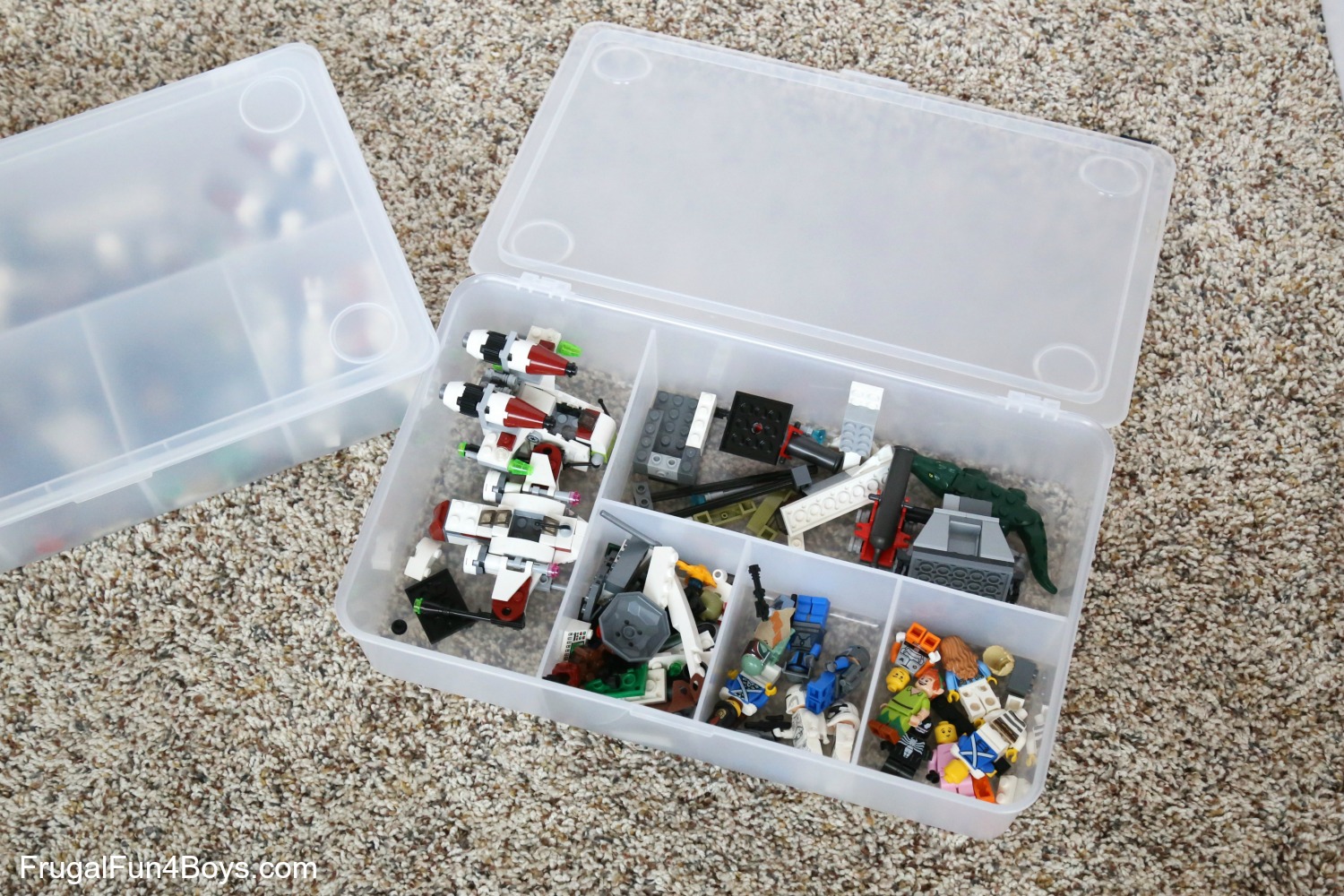 We have our LEGO Technic bricks stored in an IKEA Glis box as well. So useful. 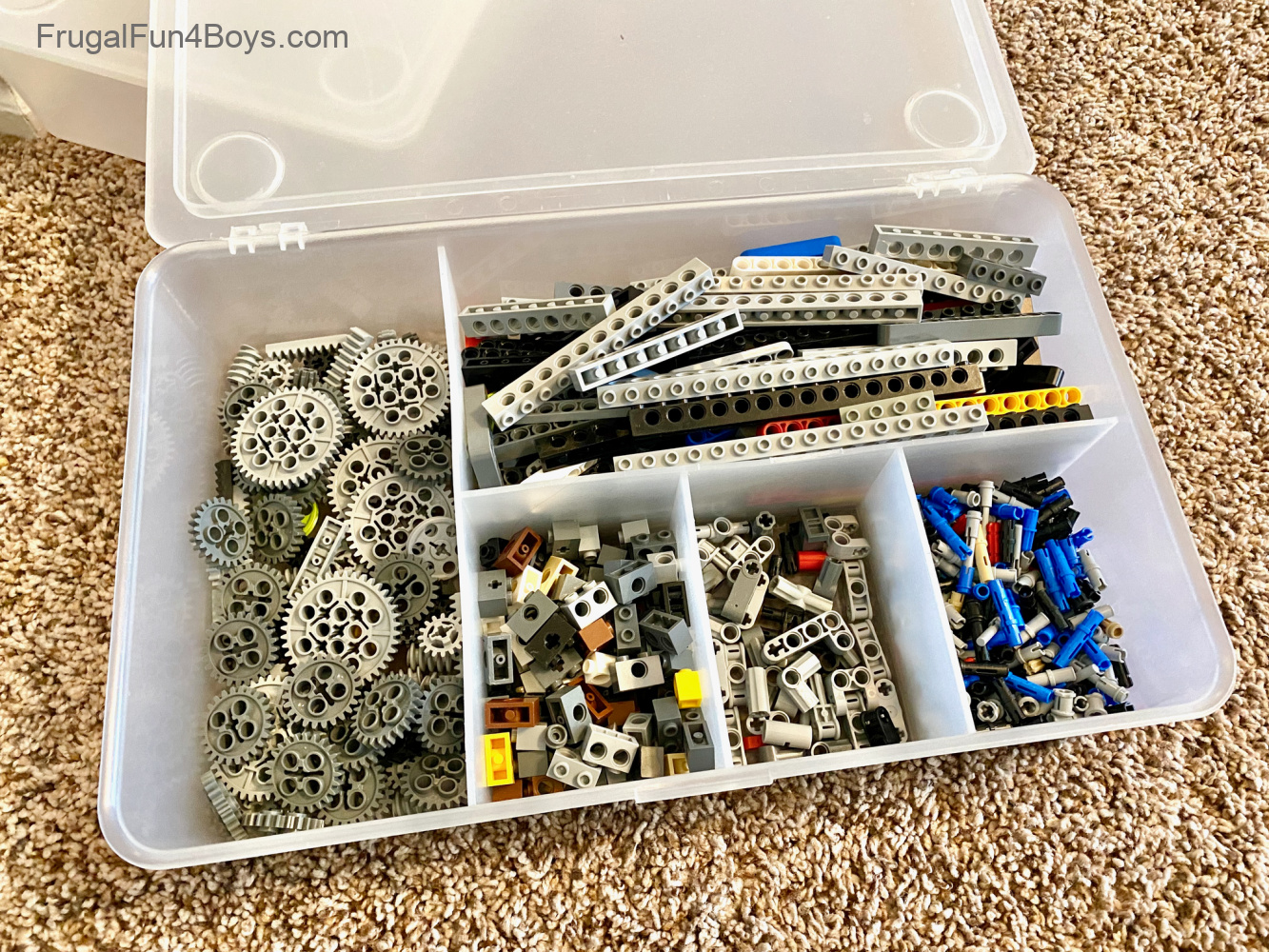 Another fun option for minifigures is our IKEA frame display.  We have had these for several months now, and they have held up very well!  Super easy to switch out the minifigures.  We dust it with canned air because it definitely gets dusty.  See how to make it here:  IKEA Frame Minifigure Display 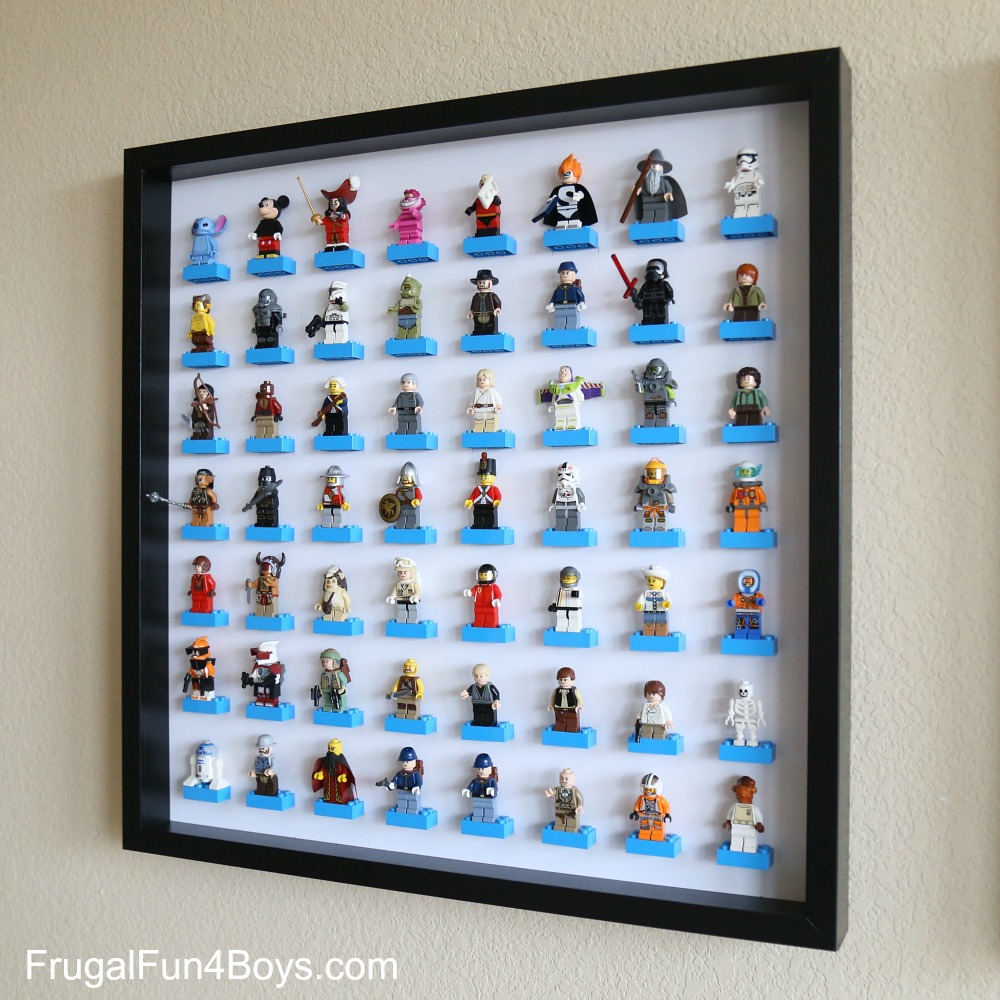 Honestly, I’ve started taking away the instruction manuals and storing them in a box in my closet for when the kids need them again.  The older kids keep up with them, but the younger ones just lose them or leave them lying around to get ripped and mangled.

Ready to see a video tour of our LEGO room? Our LEGO space takes up half of our upstairs game room. I don’t love to be in videos, but I decided to get over my fear in order to make a tour for you all. I think it might be easier to just see it!

Click the play button to watch the video. If you don’t see a play button, it’s probably because of ad blocking software. Ads allow me to keep the content on my site free, rather than charging a membership for the site.

LEGO fans will love all of our books! Each one has a different assortment of ideas – there is no overlap between the books.

Our newest book, The Big Book of Amazing LEGO Creations, is our largest book yet! It has a huge variety of ideas and also plenty of projects for beginners as well as experienced builders.

Check out all the titles and order here: LEGO Project Books 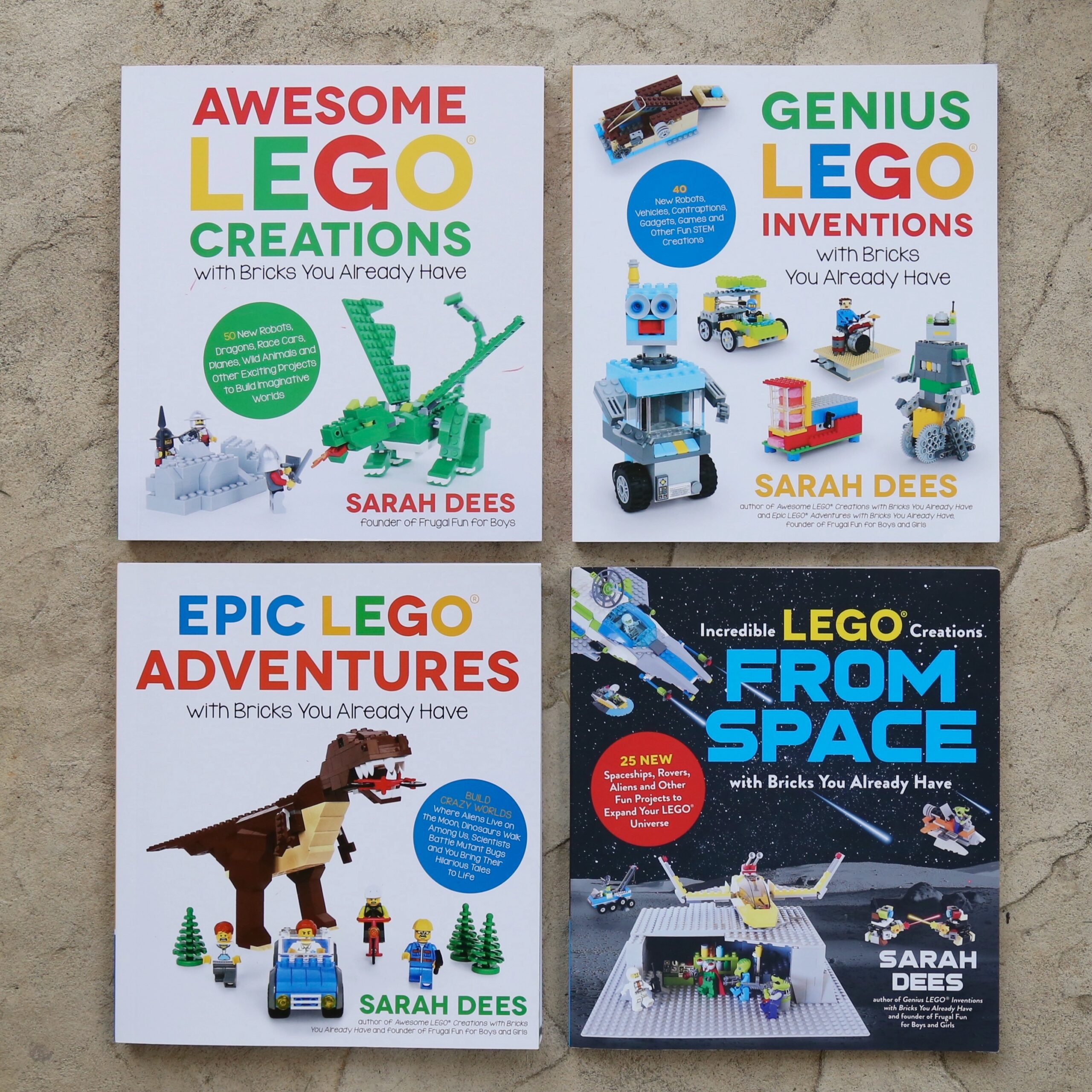