This post is sponsored by Toys R Us and Duracell.

As we get closer to the release of the new Star Wars movie on December 18th, the boys have all been obsessed with all things Star Wars. They were thrilled when we were given the opportunity to review some Star Wars Lightsabers from Toys R Us. For some reason, we have never owned any lightsabers, although the boys look longingly at them when we are at the store. I usually try to avoid battery operated toys because of the noise and the expense of replacing the batteries. Well, this is definitely a case where the batteries are worth it! These lightsabers are a great value at Toys R Us. Add some Duracell batteries and this simple no-sew Jedi costume, and you have a great gift idea. 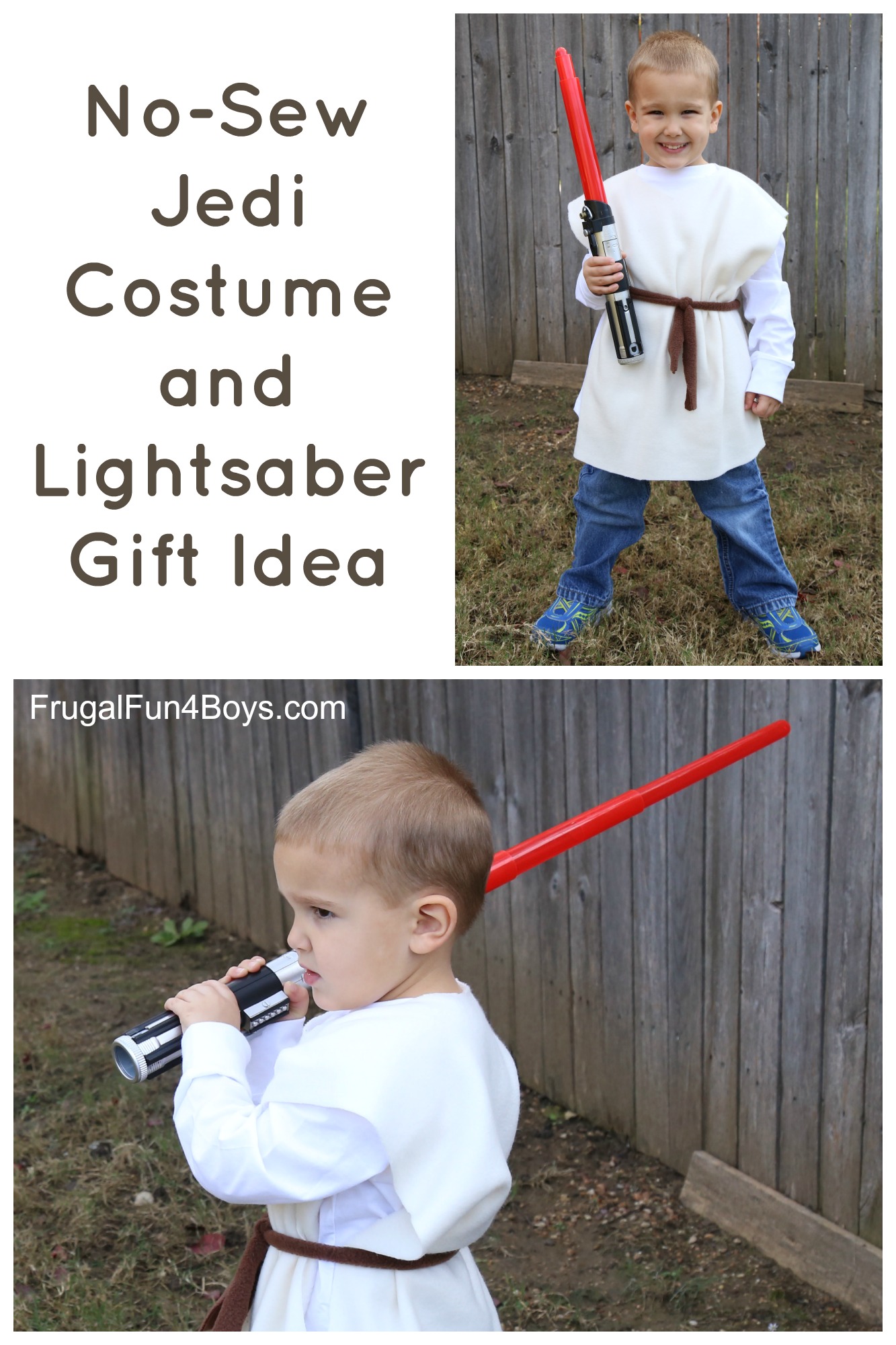 Jonathan and Owen were so excited to open the lightsabers! 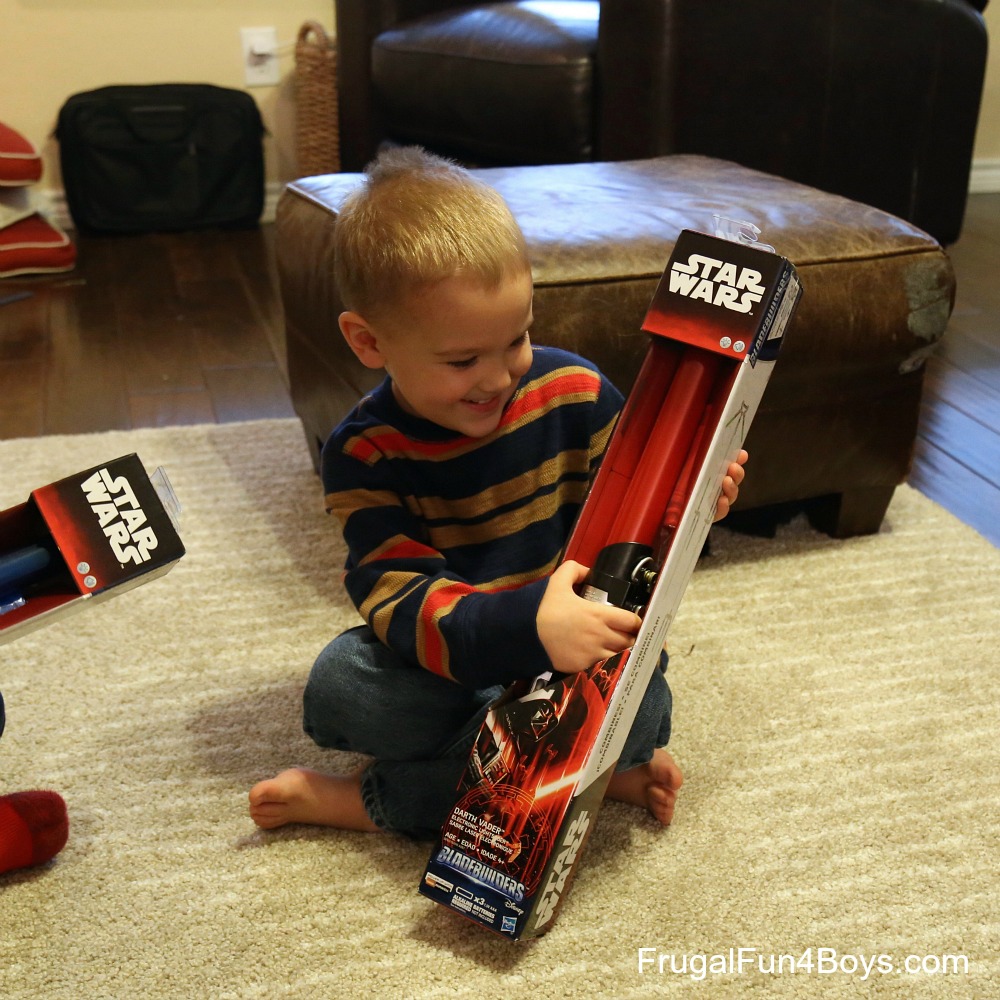 The lightsaber doesn’t do much right out of the package, however. If you give this as a gift, you’ll definitely want to include a pack of AAA Duracell batteries. 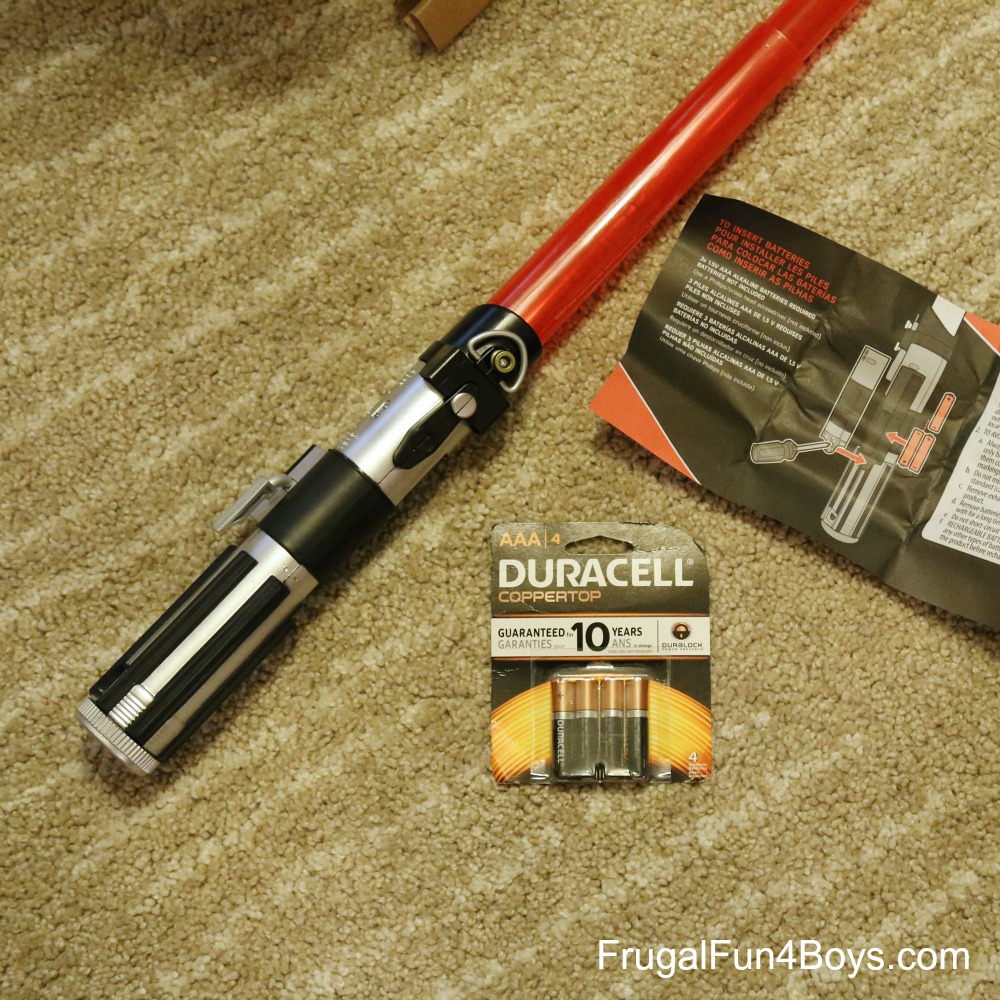 It’s super easy to get the lightsaber powered up and ready to go. You’ll need a screwdriver, but the whole process took just a couple of minutes. 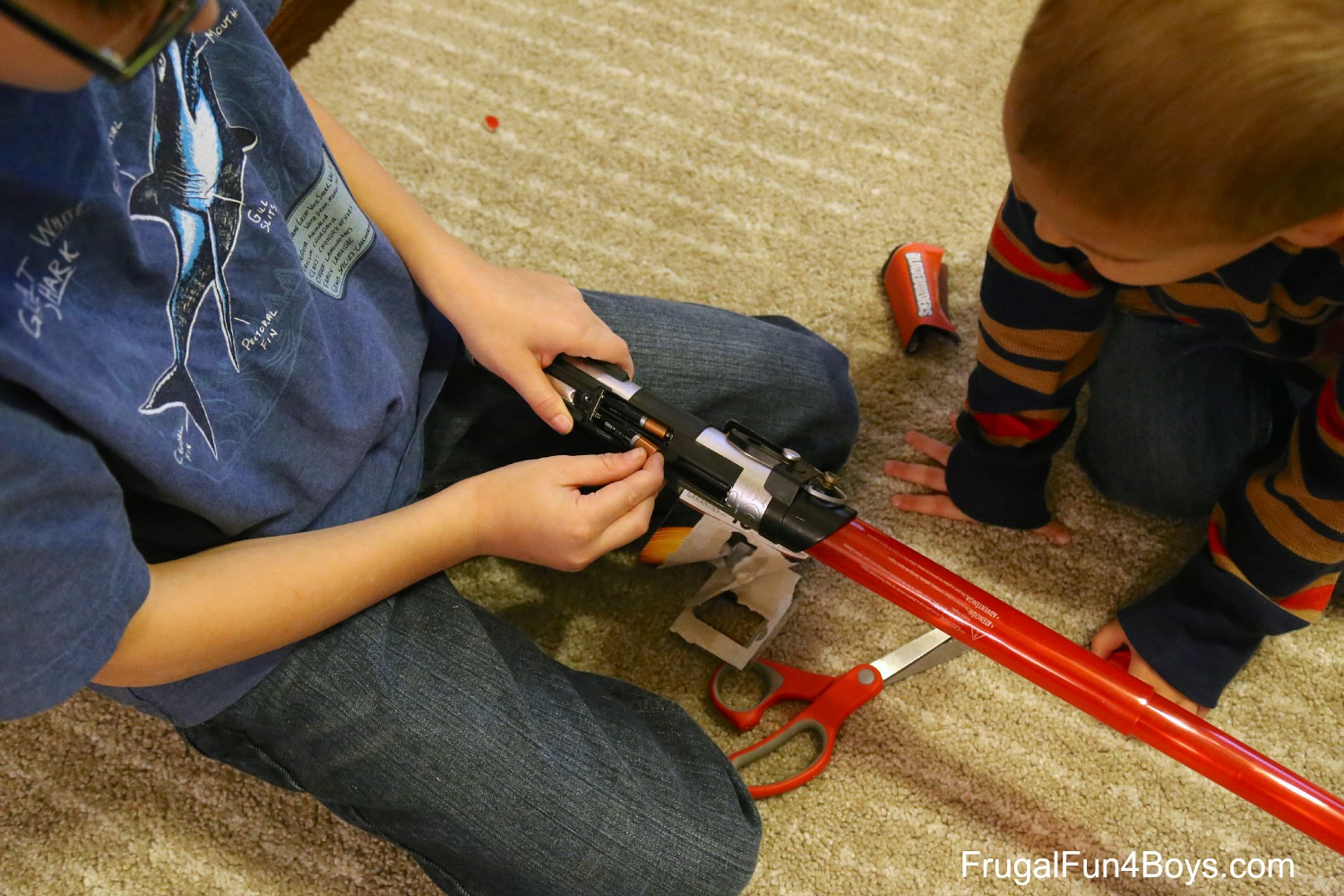 Then it was time to duel! 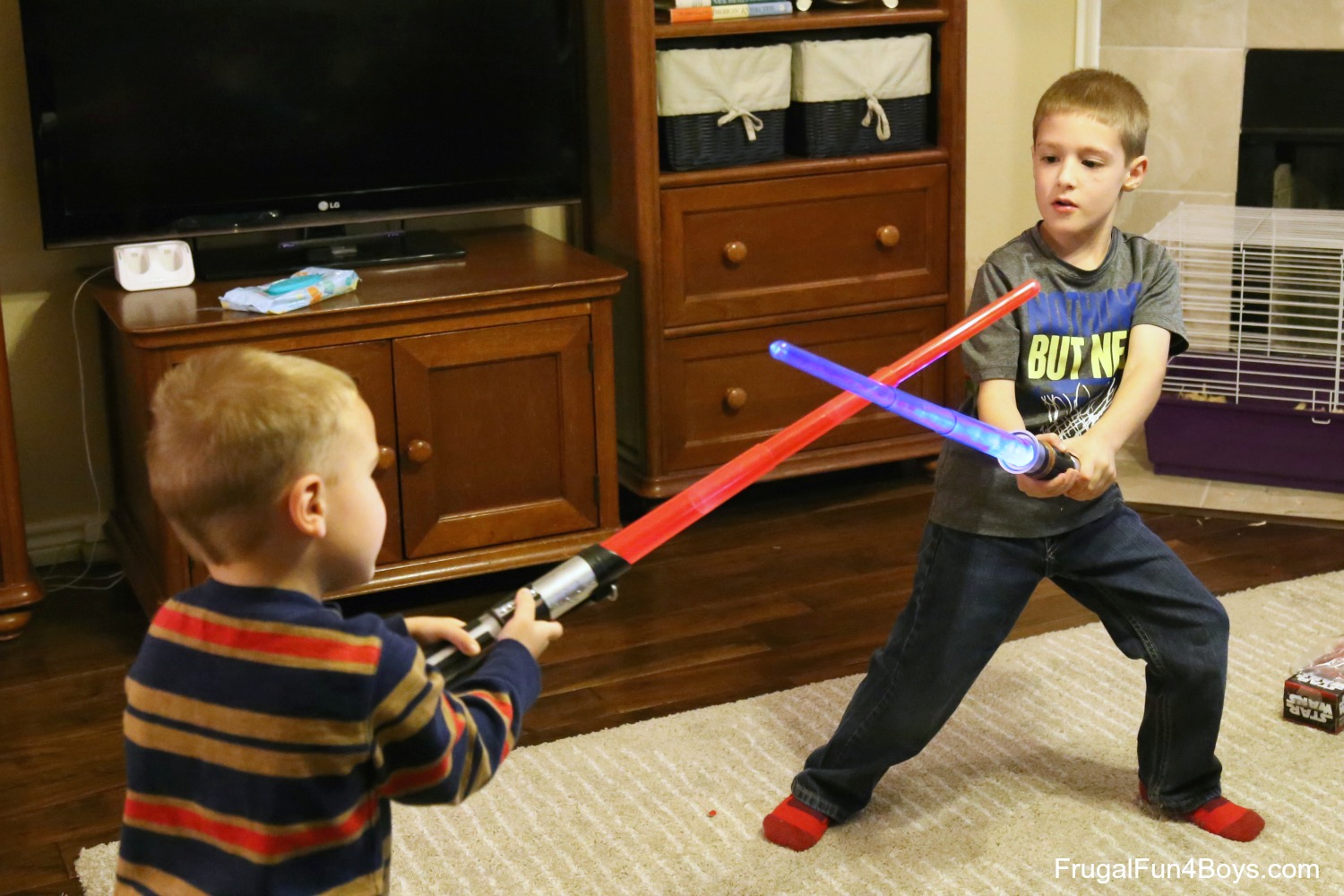 After playing with these for a few days, here’s my review. These lightsabers are pretty awesome, and I think that they are a great value for the price. They are equipped with motion sensors, and they make satisfying crackling, crashing, and impact sounds while dueling. We purchased two more to accompany the two we were given, and the boys have all been enjoying them from age 3 up to age 12, and the neighbor kids too! Our batteries are still going strong, but I’m confident that we won’t keep these in working batteries at all times. That just isn’t practical. What we often do with special battery powered toys like this is to power them up on sick days, bad weather days, or other times that we just need a boost. Then it’s like having a new toy all over again! Also, watch the newspaper for Duracell battery coupons, which will help with the cost. There will be a $3 off 2 packages of Duracell batteries coupon in the Sunday paper on November 22nd, and a $1 off 1 package coupon on December 13th.

After playing with their lightsabers, the boys decided that they needed to dress up like Jedis. We came up with a simple no-sew costume that literally takes 10 minutes to make. 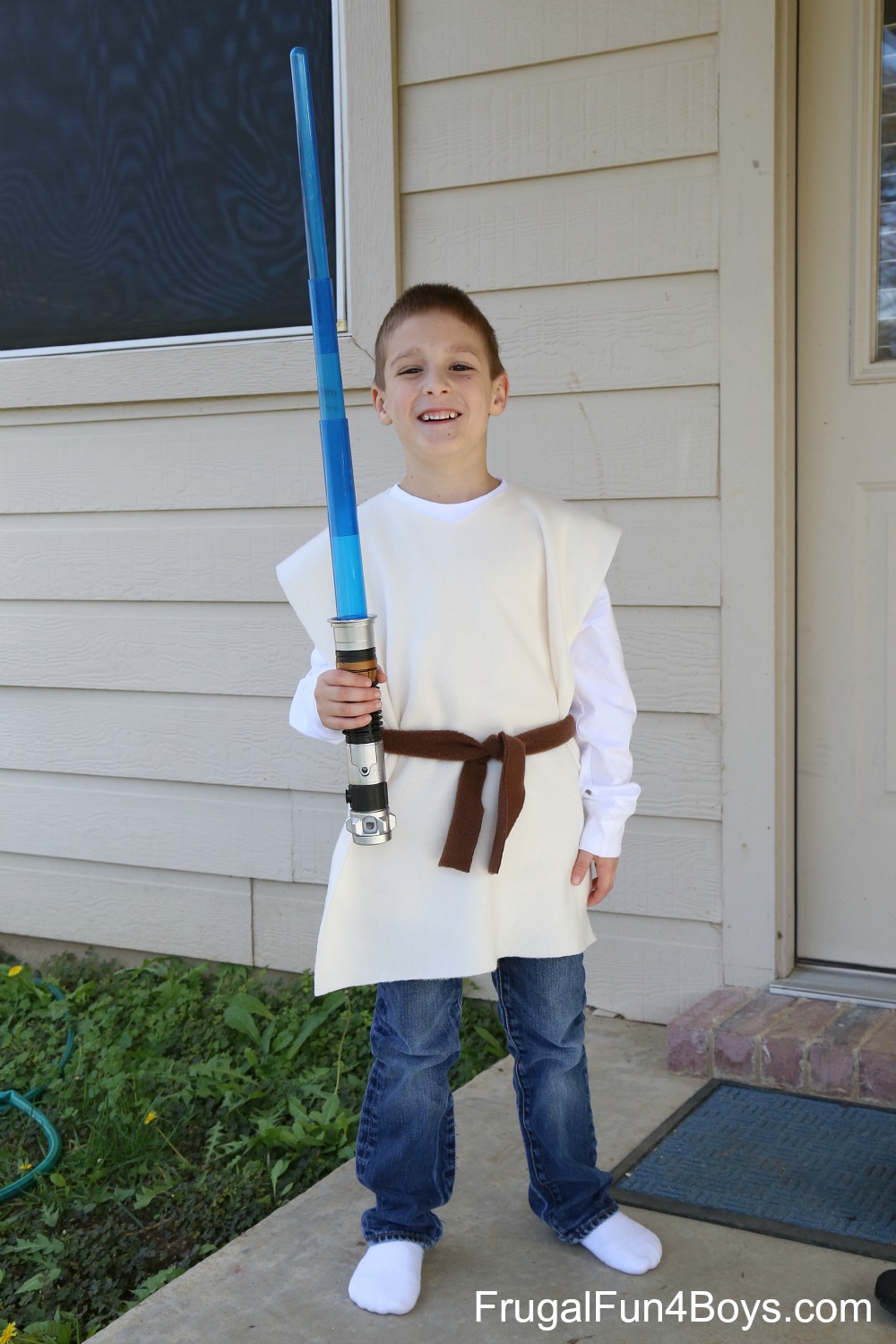 Owen and Jonathan have been practically living in their Jedi costumes this week, taking them off only for meals because they don’t want them to get stained!

I bought 2 yards of cream colored fleece at the fabric store. For Owen’s costume (age 6), I cut a rectangle of fleece that was 44 inches by 15 inches. Jonathan is 3, almost 4 and I made his 40 inches by 14 inches. I folded each rectangle in half and cut a head opening 5 inches wide. Then I trimmed the front to make it a v-neck. I used some scraps of brown fleece to make belts, and that was it! The boys have been wearing their Jedi tunics over plain white t-shirts. There are definitely better looking Jedi costumes out there, and real Jedi belts don’t tie. But, for the price and convenience, you can’t beat this simple costume. 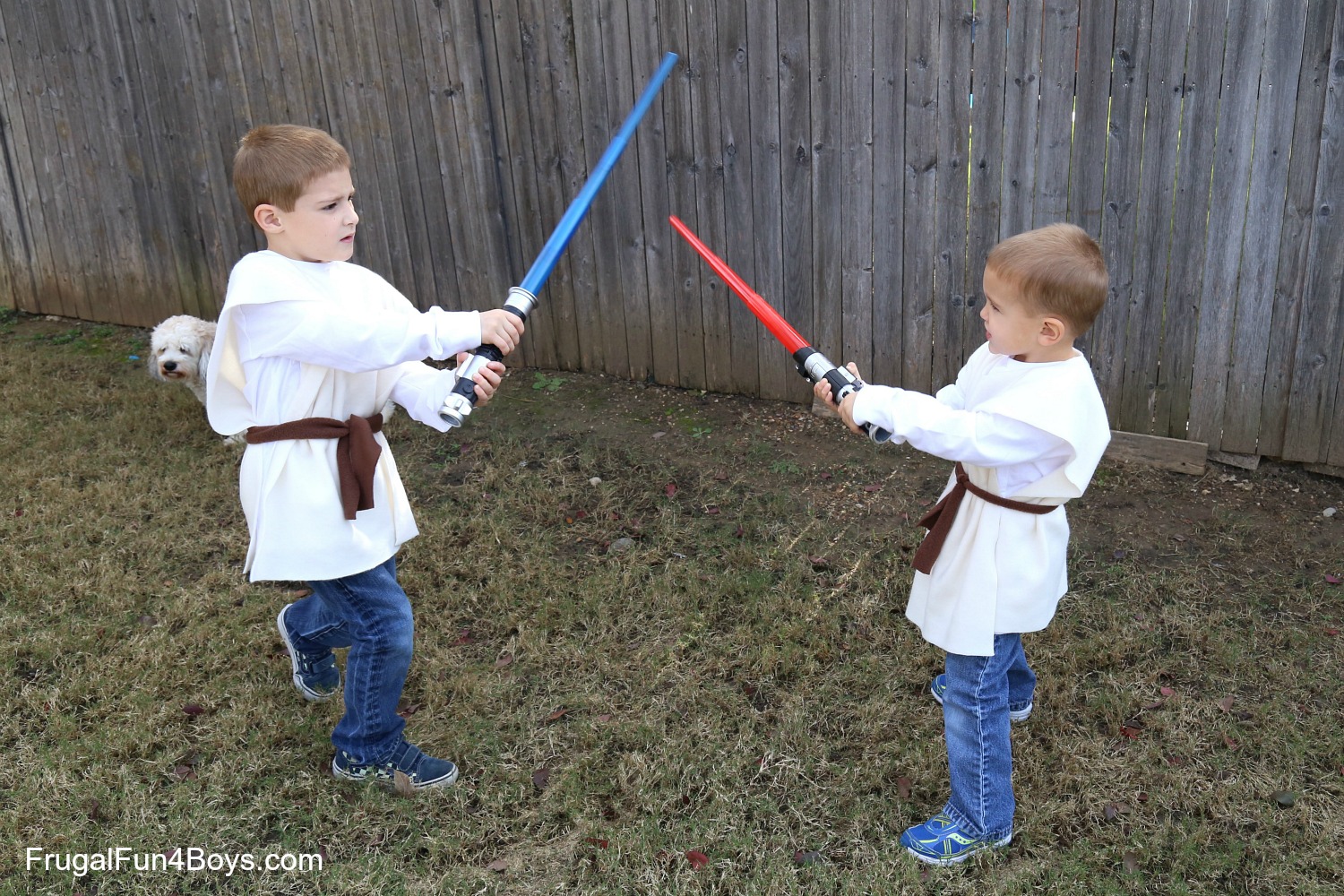 It would be fun to give a lightsaber as a gift, along with batteries and a Jedi costume! Or anything from the collection of Star Wars toys at Toys R Us! And to help with that, Toys R Us and Duracell has generously provided a giveaway of a $100 Toys R Us gift card plus Duracell batteries! Enter the giveaway below. Giveaway ends at 12:00 a.m. on Sunday November 22nd.

This is a sponsored conversation written by me on behalf of Duracell & Toys “R” Us. The opinions and text are all mine.