While I do love LEGO® (and the way it keeps the boys creatively busy!), I get weary of the little pieces everywhere. Both couches have LEGO® bricks under them, and I bet that at any given time I could find some type of LEGO® piece in every room of the house! 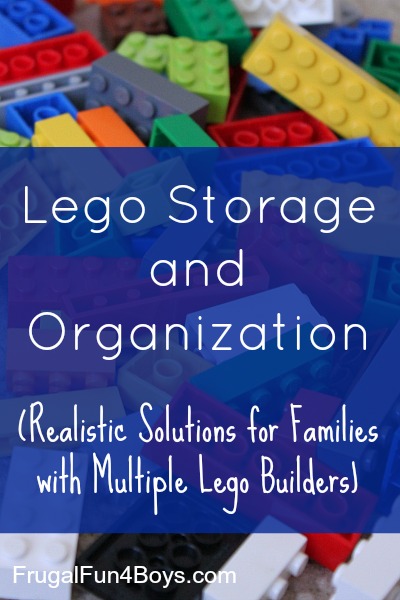 We recently moved Jonathan into Aidan’s room, and since we have been moving things around, we’ve also been reconsidering all of our toy storage and organization. There are so many awesome LEGO® organization ideas on Pinterest, but the reality is that I have only one son who likes his LEGO®s semi-organized and two sons who aren’t organized in the slightest!

So here is our reality-based (ha!) approach to LEGO® management…

The castle sets are together in their own storage tub.

For minifigures, Aidan has this three drawer storage unit that we bought at Walmart: 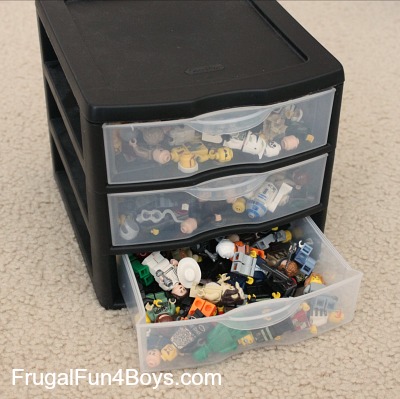 He keeps accessories for minifigures in this box that we found at Target. It’s also a great box for taking a few Legos on the go. 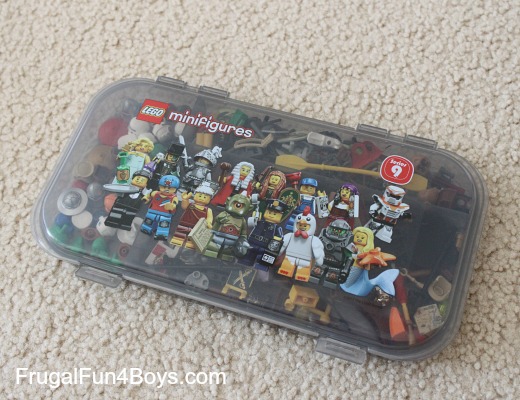 Gresham and Owen (8 and 5) each have a storage tub for the LEGO® sets that belong specifically to them, but the problem is that neither of them do a very good job of keeping track of their parts! Their sets start out together, but unlike Aidan, they both enjoy building and re-building over and over (which is not a bad thing). Eventually all of their pieces migrate to our big tub of basic blocks (or under the couch, or in the van, or under the bed…). I don’t mind their bricks just being in the big basic tub, except that then they fight over the pieces whenever one of “their” LEGO® pieces is played with by someone else in the family.

After many brick fights, we have developed the following system:

Basic bricks (including wheels, windows, and specialty pieces from the boys’ sets) are stored in this large rolling tub that we found at a garage sale for $2. Pretty sweet deal! 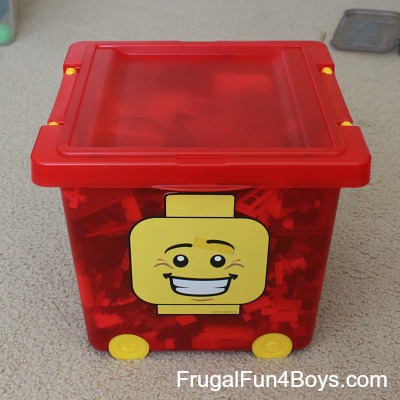 Update: LEGO® Table!! We now store all of our basic bricks in our new Lego table that we built out of IKEA storage. Each boy has their own tub for their parts in the Lego table, and there are two tubs for basic bricks, plus tubs for other things. Check out our Lego table post for more details!

When everyone is playing LEGO®, the room ends up a LEGO® explosion! And, like I said, we run into problems when someone has someone else’s piece that they found in the basic tub. Or, they fight over pieces that they were using but that someone else took because it wasn’t in their hand at that moment. This has led to the next rule… 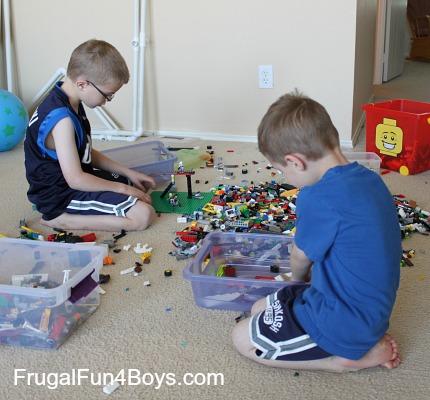 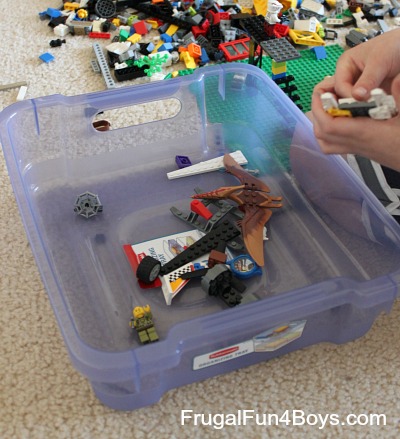 The trays I purchased are Rubbermaid Clever Store Organizing Trays for 30 quart storage tubs – they’re designed to sit inside the big tubs to provide smaller areas or organization. I got ours at Target and can’t remember what I paid – less than $5 per tray. These trays are the perfect size for holding a base plate, which is very convenient for putting away projects that are still in progress! The trays go on a shelf in our game room, and it’s a great way to contain things they are not ready to take apart yet.

Can we ever rebuild Gresham and Owen’s sets that they mixed together? It would be a challenge, for sure. I would prefer to have kept the sets separate, but I don’t have the time to enforce that rule since it’s not important to them. The huge tub has made life easier for all of us!

About pieces that fail to find their way back to the box:

We have tried taking away LEGO® bricks that were left out, and that really didn’t work too well. The boys don’t leave out the parts they really care about – just odds and ends. So they don’t care if they get those pieces back or not! A friend of mine gave me some inspiration in this area. She said that if her children have gotten into a pattern of not bothering to pick up all of the pieces of a particular toy, then they lose the entire toy for a while. This has worked well for us with LEGO®! If the boys have gotten into the habit of being lazy with their LEGO® clean-up, then they lose ALL the LEGO®s for a week or more. After the break, they are usually ready to take better care of their LEGO®s.

Amazon links to what we’re using:

(These are affiliate links, which means that if you purchase through the links I will earn a small percentage of the sale at no additional cost to you.)

How do you organize your kids’ LEGO®s?