Epic LEGO® Creations with Bricks You Already Have – Build Crazy Worlds Where Aliens Live on the Moon, Dinosaurs Walk Among Us, Scientists Battle Mutant Bugs, and You Bring Their Hilarious Tales to Life!

I am so excited to show you our newest LEGO® book! This book has 38 new LEGO® projects with step-by-step instructions (for every project), but it also has something more – hilarious scenes and epic adventure stories that will inspire hours of creative building.

Order Here: Epic LEGO® Adventures with Bricks You Already Have

Like our first book, the goal of this LEGO® project book is to inspire kids to get creative with the bricks they already have. While I was writing my first book (Awesome LEGO Creations with Bricks You Already Have), I honestly had doubts – will kids really want to use a book with instructions that don’t match any specific set? Will they use our ideas as a springboard to build their own LEGO® creations? The answer to both has been a resounding YES! I have been so encouraged by the feedback from our first book!

Here are some of the things I’ve heard:

This second book keeps the same spirit of creativity and new inspiration for bricks you already have.

What age is the book recommended for? And can we really build all the projects with the bricks we have?

I would recommend Epic LEGO® Creations with Bricks You Already Have for kids ages 5 to 10. LEGO® really transcends age, though, and there will definitely be some older kids who will enjoy this book. My second son is turning 11 on release day, and he is asking for his own copy of the book for his birthday. We have a family copy of the first book, and then I have copies saved for each of them for when they are older. Well, this time he wants his own now – so he can read all the stories over and over!

After our preview copy arrived, I went to take photos with it and couldn’t find it. My 8 and 10 year olds had the book upstairs in our game room, and they were busy building the projects!

Now, about how many bricks you’ll need. This book works the best for kids who have a big bucket of random bricks from taken-apart sets. There is not one set that you can buy in order to make all the projects. It wouldn’t be practical to write that way because it isn’t possible to make that many book-worthy projects from one set. And then LEGO® would retire the set, and the book would be obsolete.

It isn’t necessary to make all of the projects the same colors that we used. In the book, I encourage kids to substitute colors or types of bricks and make adaptations based on what they have.

Crash Landing on the Moon – A hilarious tale about astronauts who encounter some crazy aliens.

Dinosaurs on the Loose – Three siblings go back in time and bring back mysterious eggs that contain baby dinosaurs who grow up into gigantic pets!

Tex Alexander and the Quest for the Crystal Bunny – An exciting tale about an adventurer and his sidekick and a crazy archeological quest.

The Best Worst Camping Trip Ever – A slapstick vacation tale, where everything that can go wrong, does.

Here’s an example from the dinosaur chapter. This is an excerpt from the story. 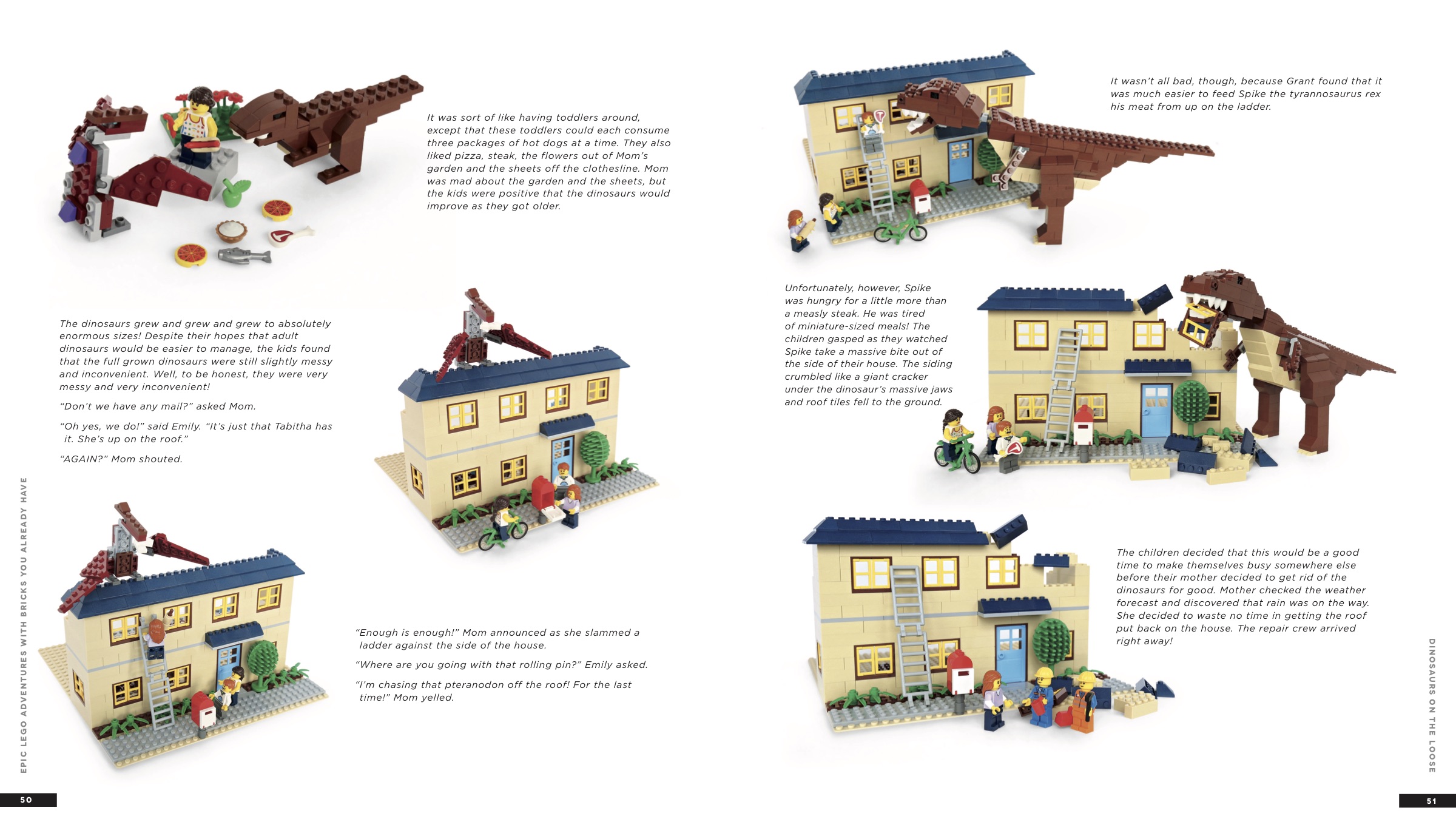 And then there are instructions. (Note that this is not the full project.) 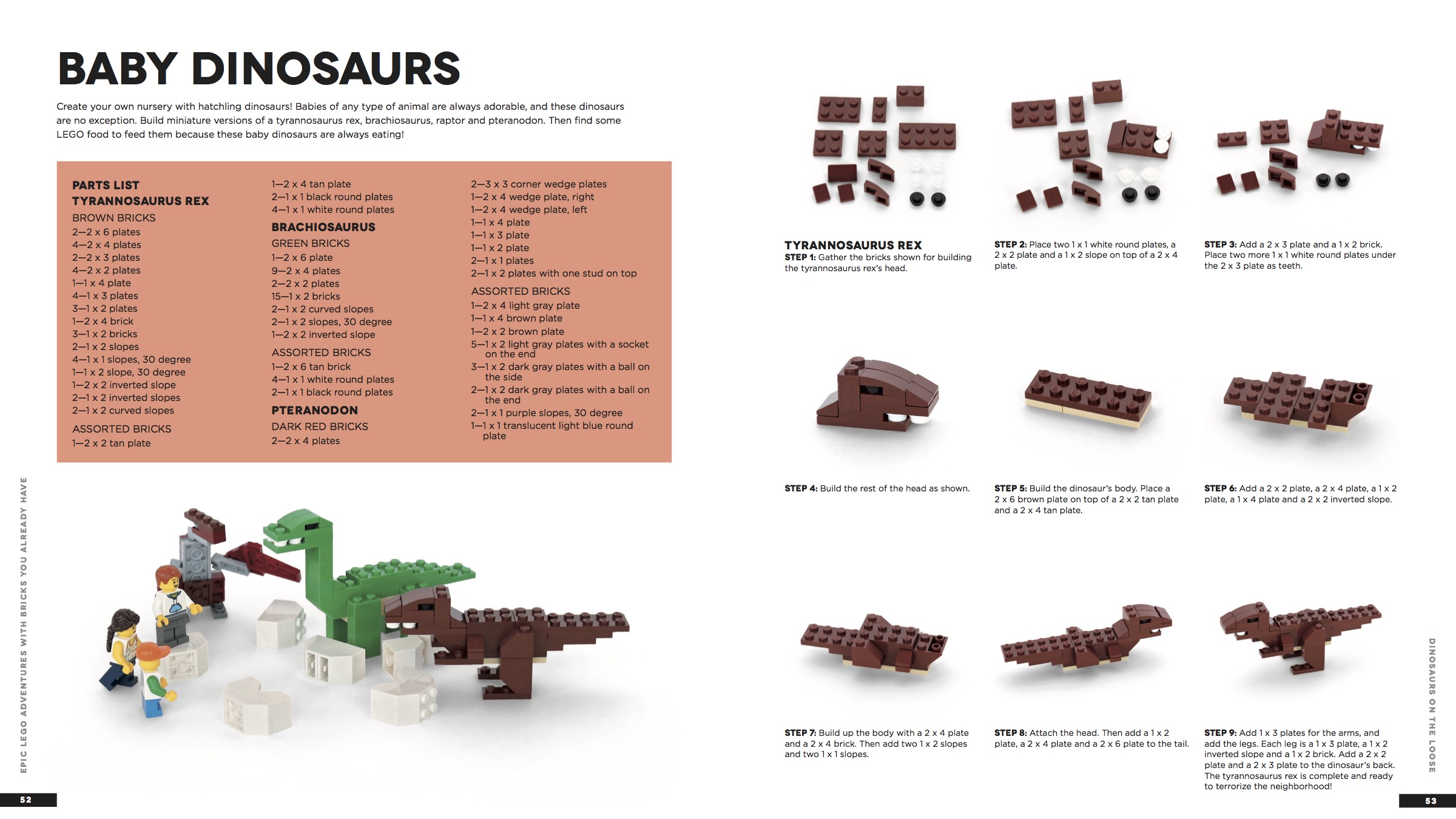 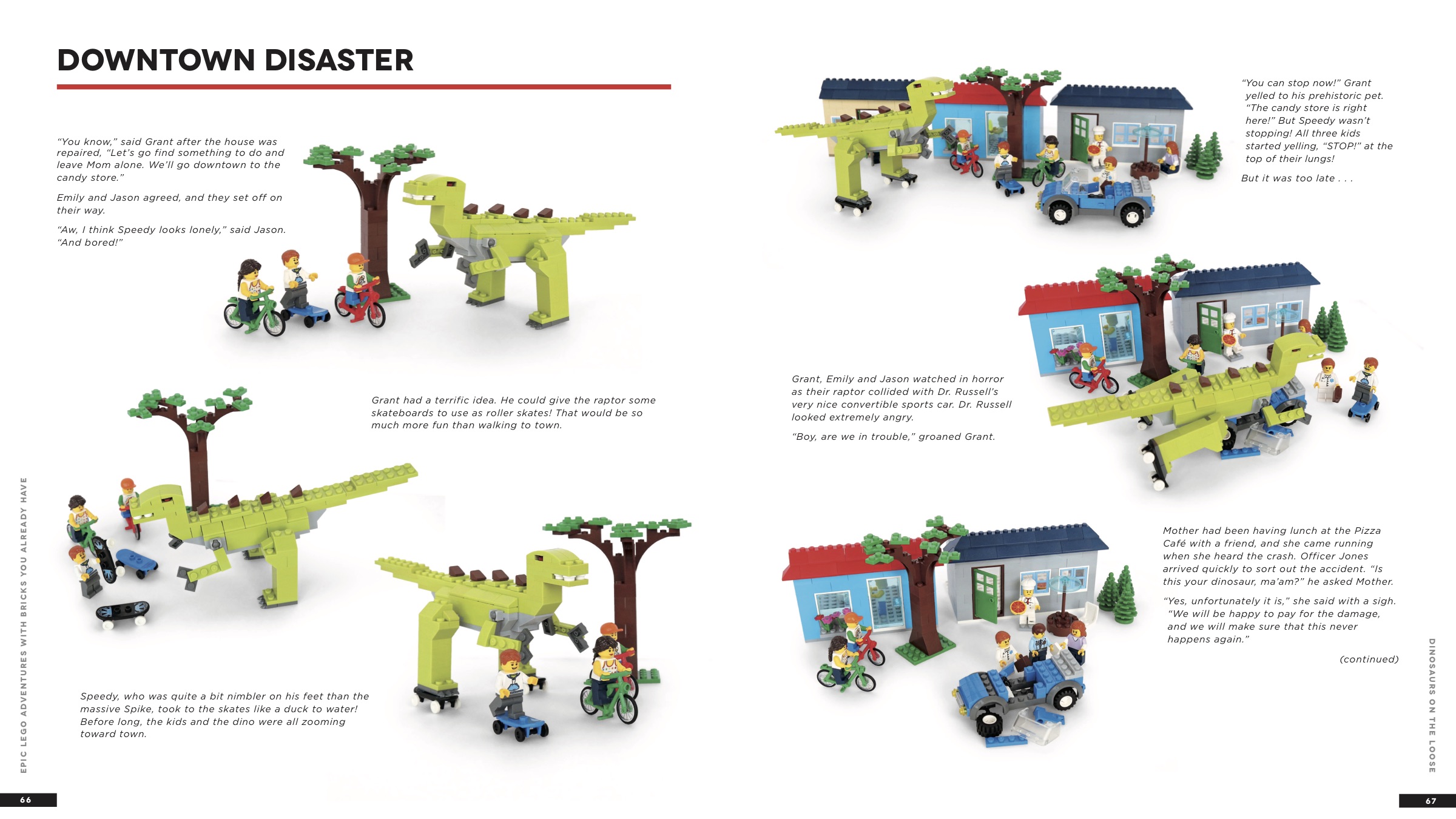 And a few more samples… Here’s a project from the alien chapter: 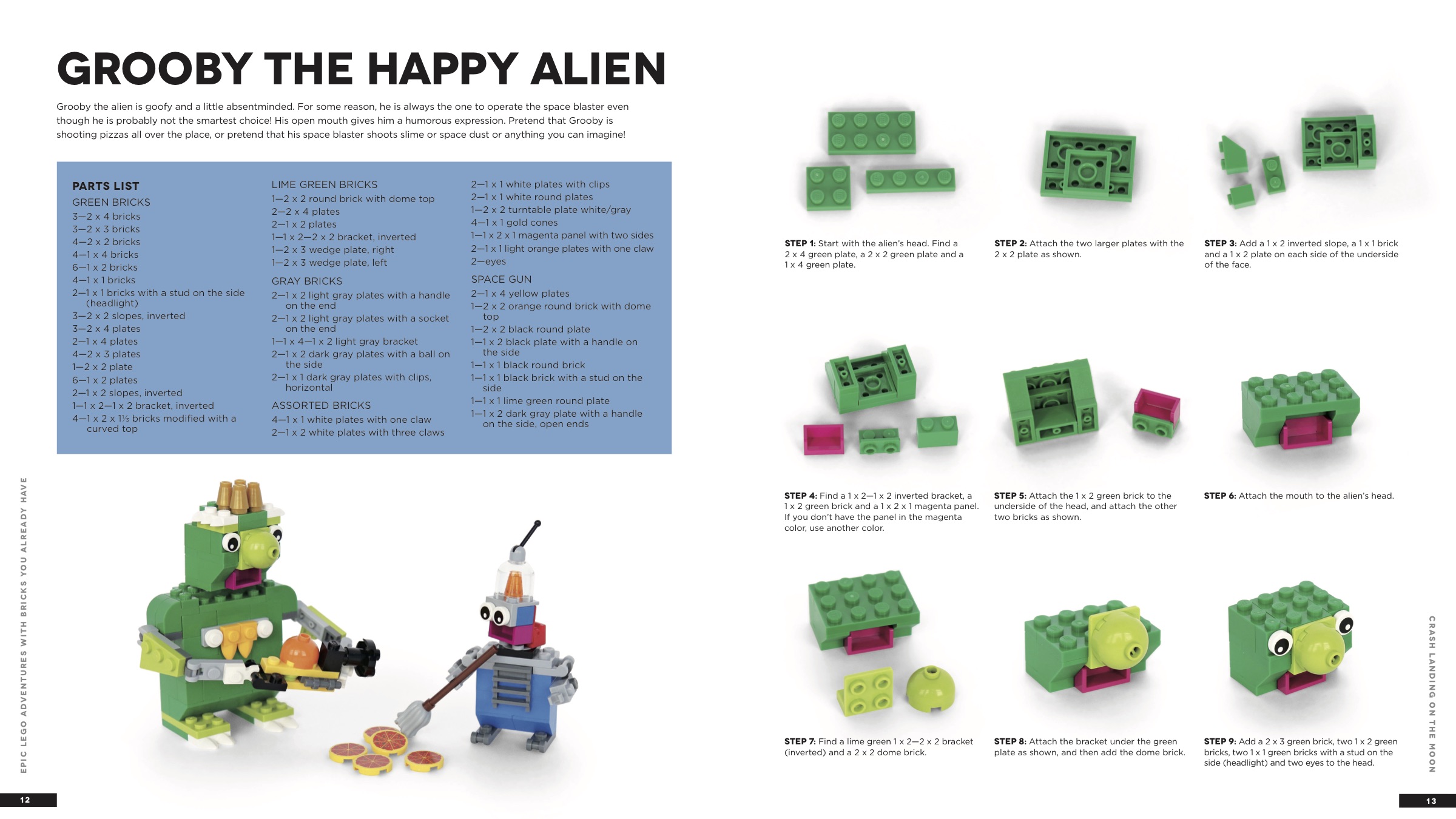 And a sample of the story from the Tex Alexander chapter: 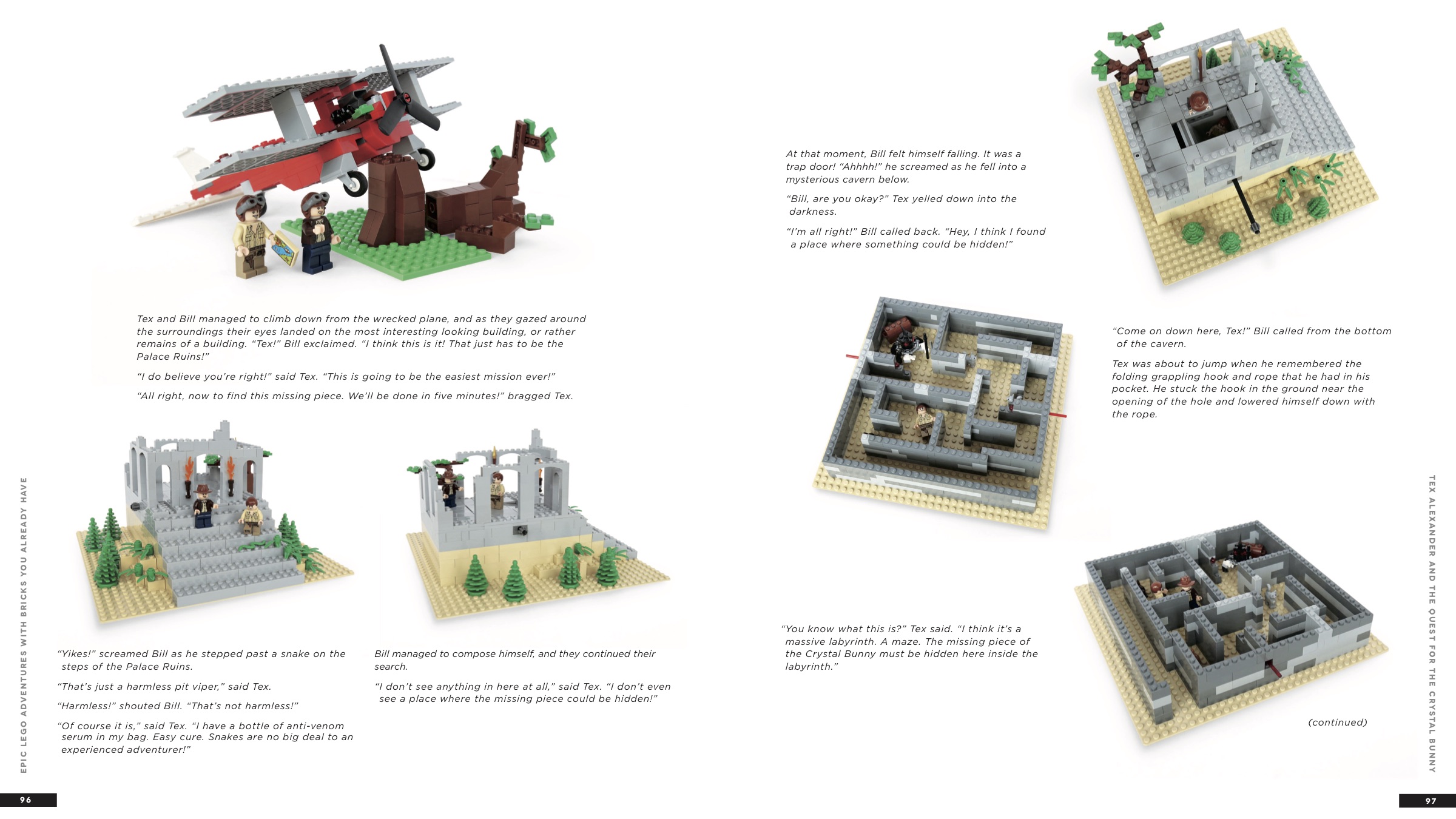 You’ll definitely want to pre-order a copy! Our first book sold out even before the height of the Christmas shopping season. We are not planning for that to happen again, but you might want to pre-order to be on the safe side. Your copy will arrive on the release day – October 10, 2017.

Amazon: Epic LEGO® Adventures with Bricks You Already Have

Barnes and Noble: Epic LEGO® Adventures with Bricks You Already Have

Indiebound: (support an independent bookstore near you) Epic LEGO® Adventures with Bricks You Already Have 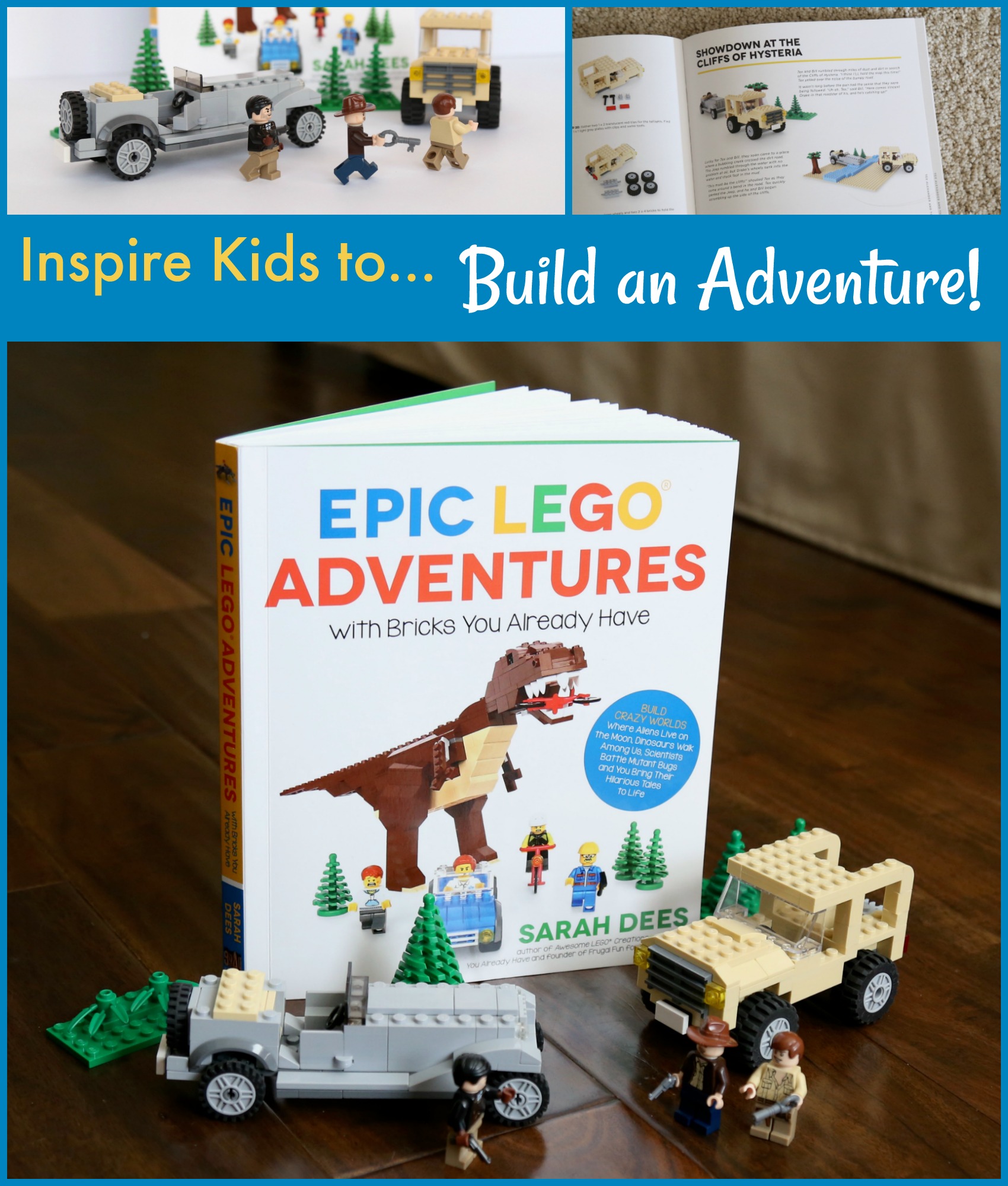