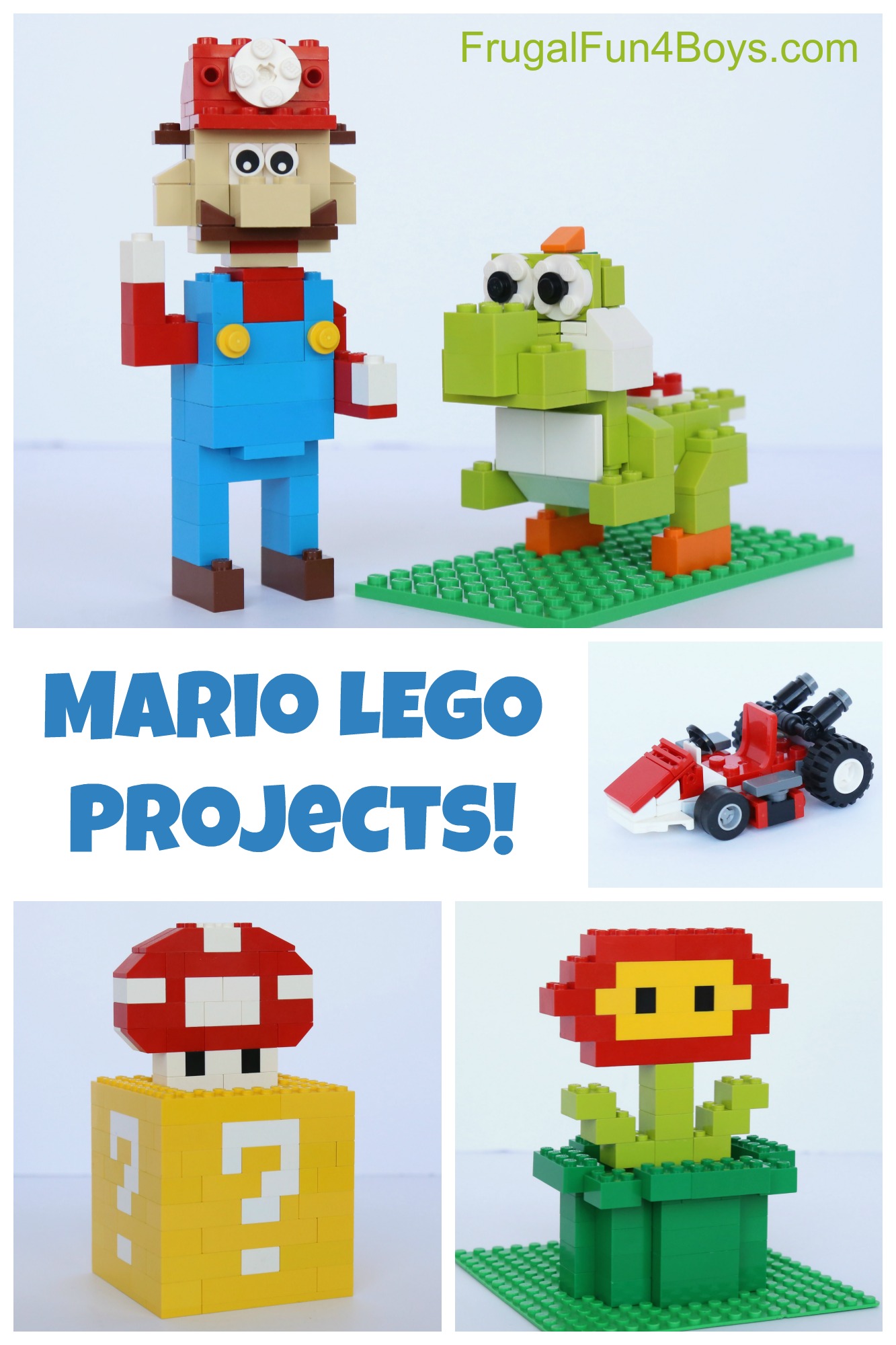 The boys and I have been having so much fun designing these Super Mario Brothers and Mariokart LEGO® projects to share with you.

Yoshi is our favorite, but I put him last in this post because we made step-by-step instructions for him and it’s a LOT of pictures. 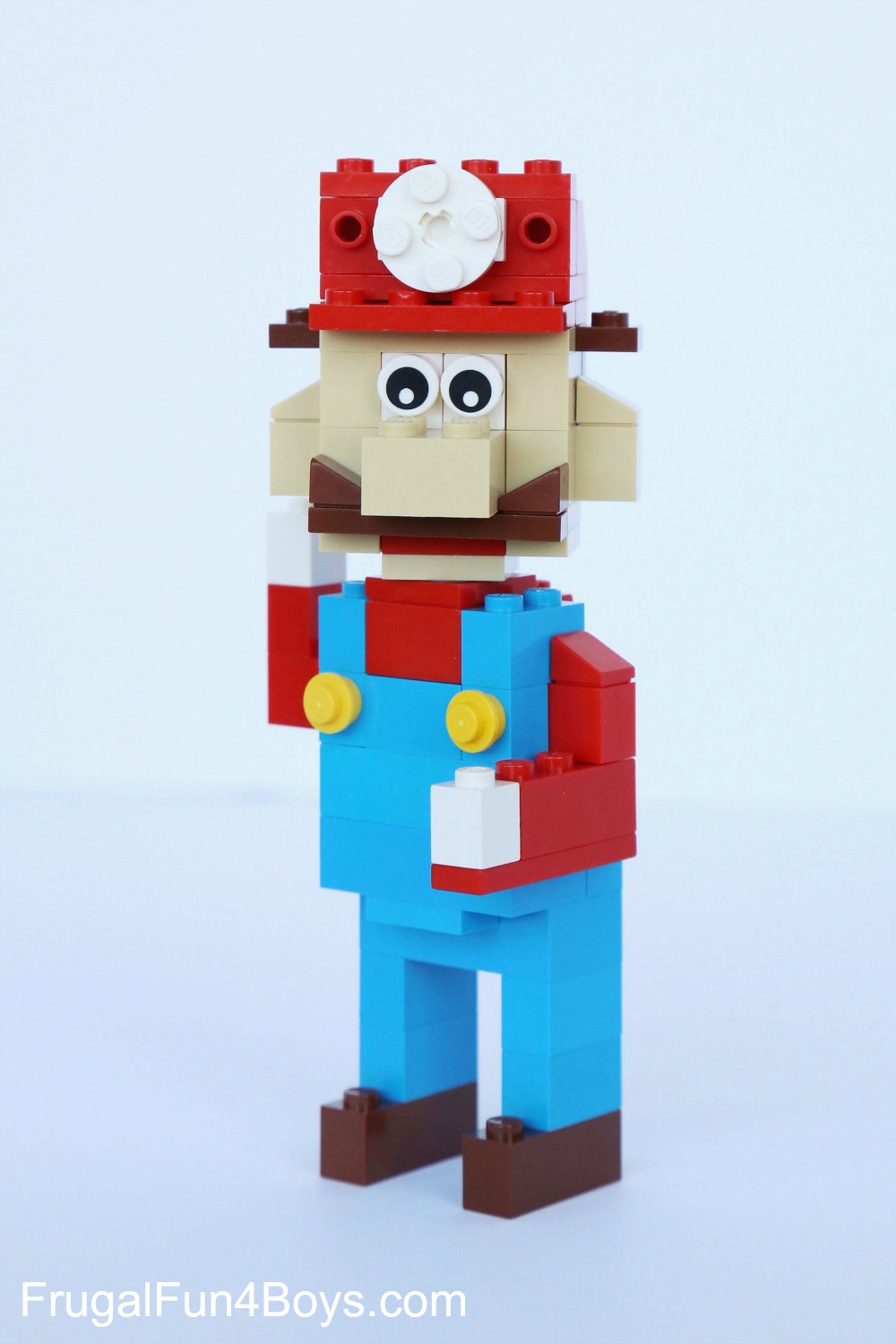 We built Mario’s overalls using one of the new shades of blue from the LEGO® Classic tubs. The yellow buttons on the overalls are attached to bricks that have a stud on the front. I wanted to make his legs thicker, but if we made them 2 studs wide, then there wouldn’t be any space between the legs. Changing the scale for the whole project wasn’t really an option so we just left it.

Here’s how we built his head. The mustache is a 4 x 1 flat brick with 1 x 1 slope bricks on each side. It attaches under the nose. We had some brown 4 x 1 bricks that have rounded sections (not sure what to call them!) so we used those for hair. 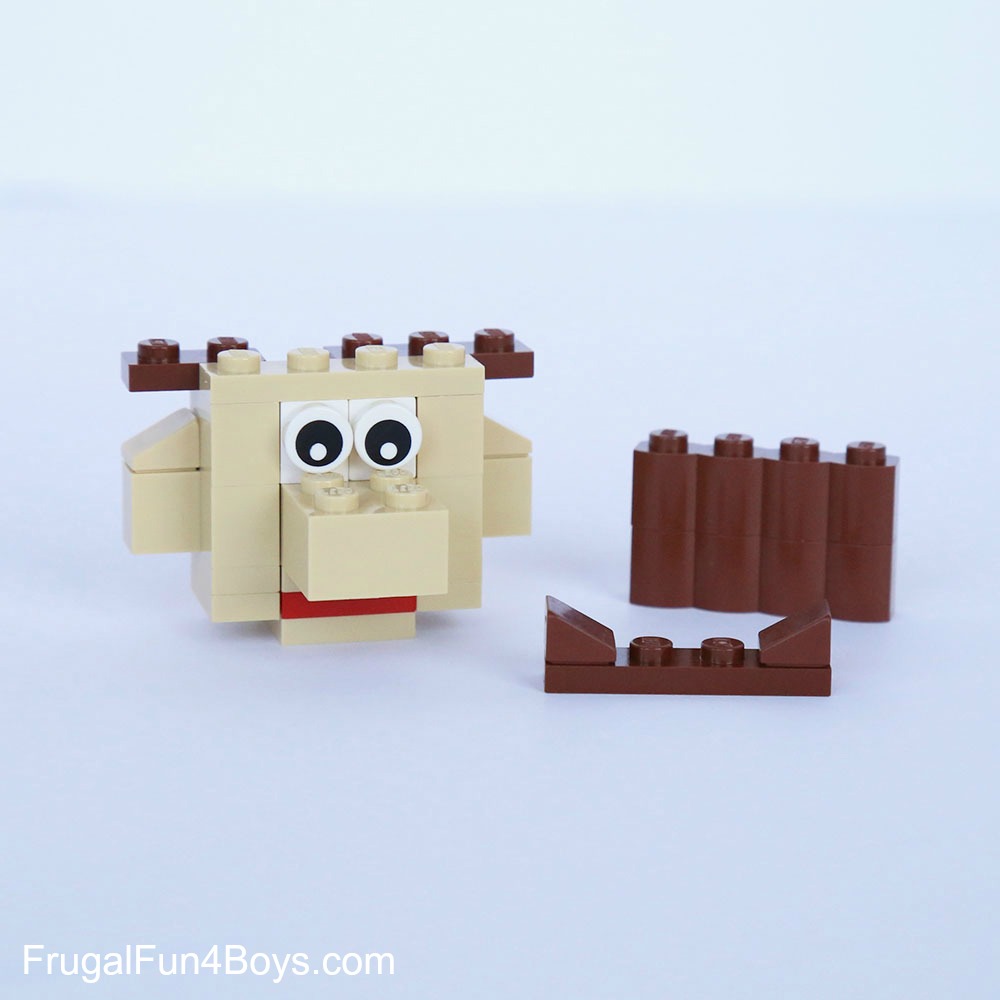 Here’s a view from the back of the head. We used two 2 x 3 bricks in the head which stick out to make the ears. 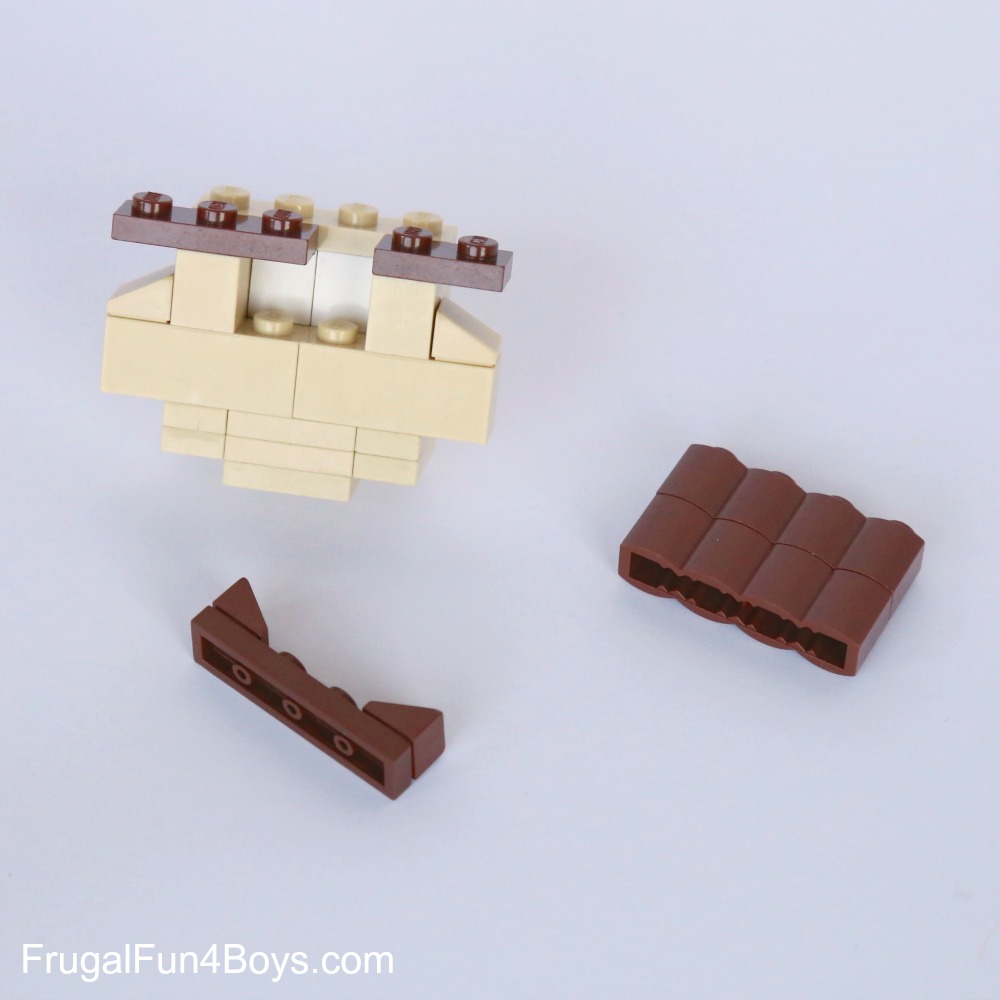 Attach the mustache and build the hat. 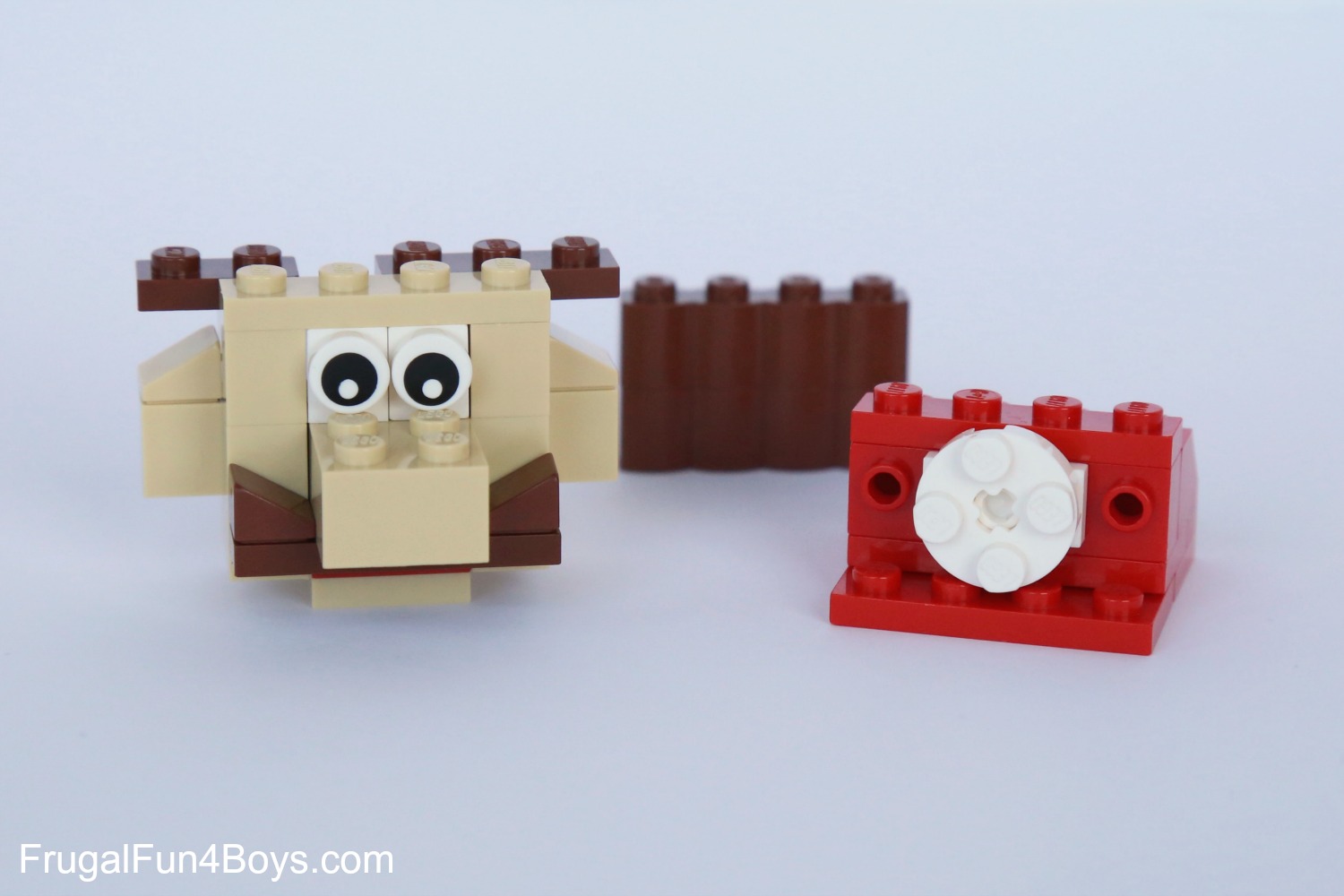 And here is the finished head. The hair is attached to the hat, not the head. 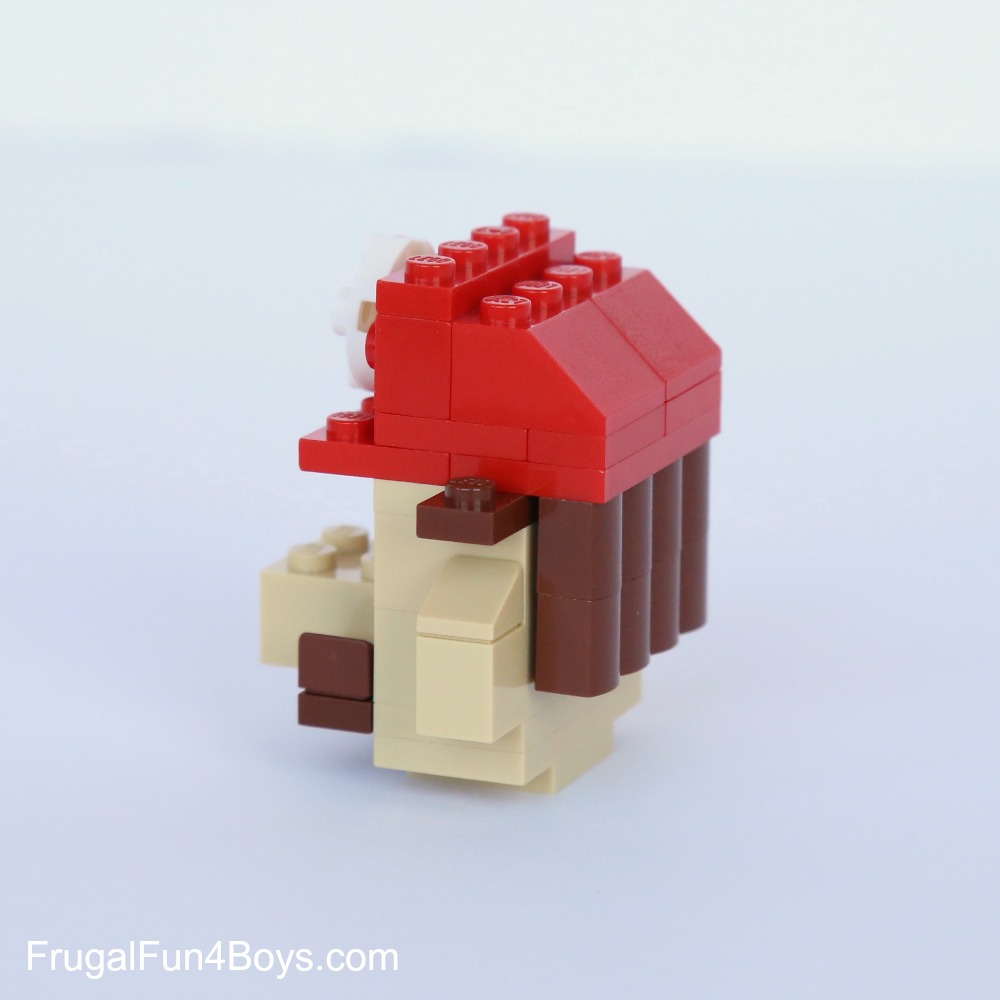 We used a swivel brick to make the head turn. 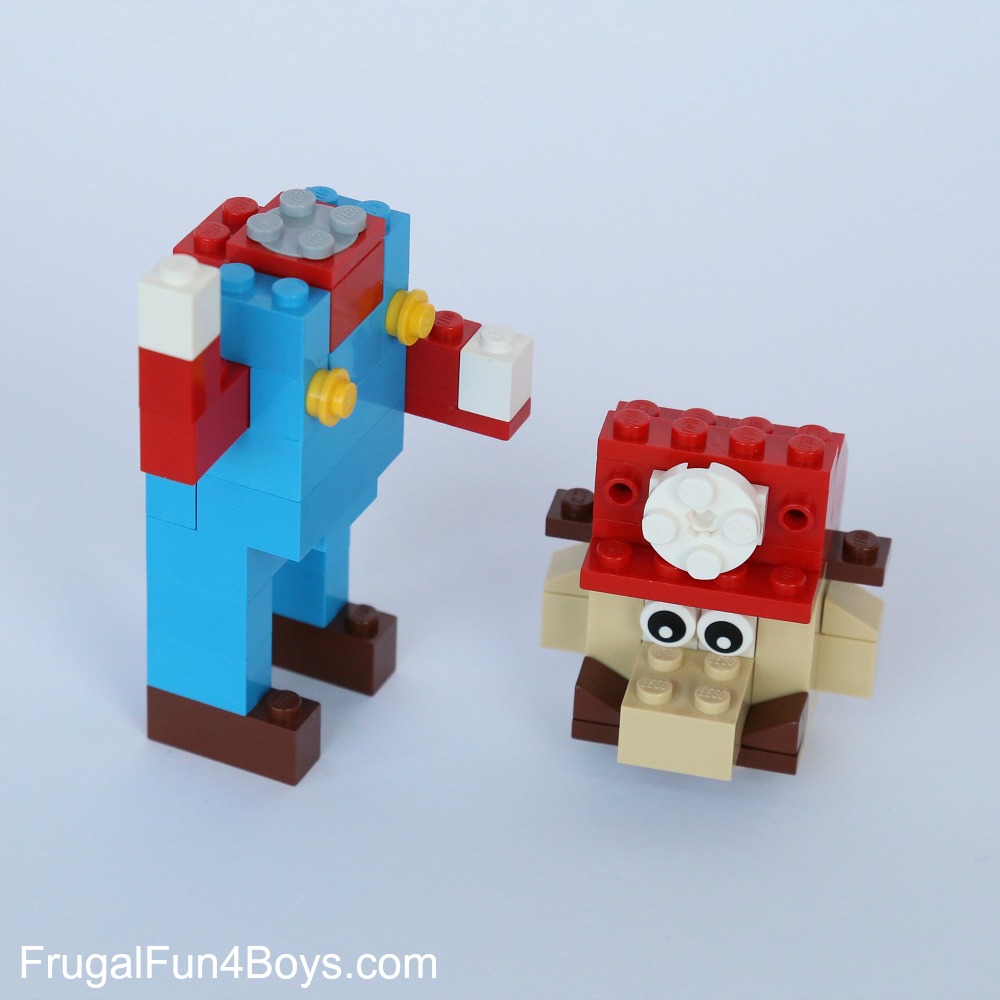 Once you have built Mario, it would be really easy to make a Luigi using the same design with a green hat and green shirt. 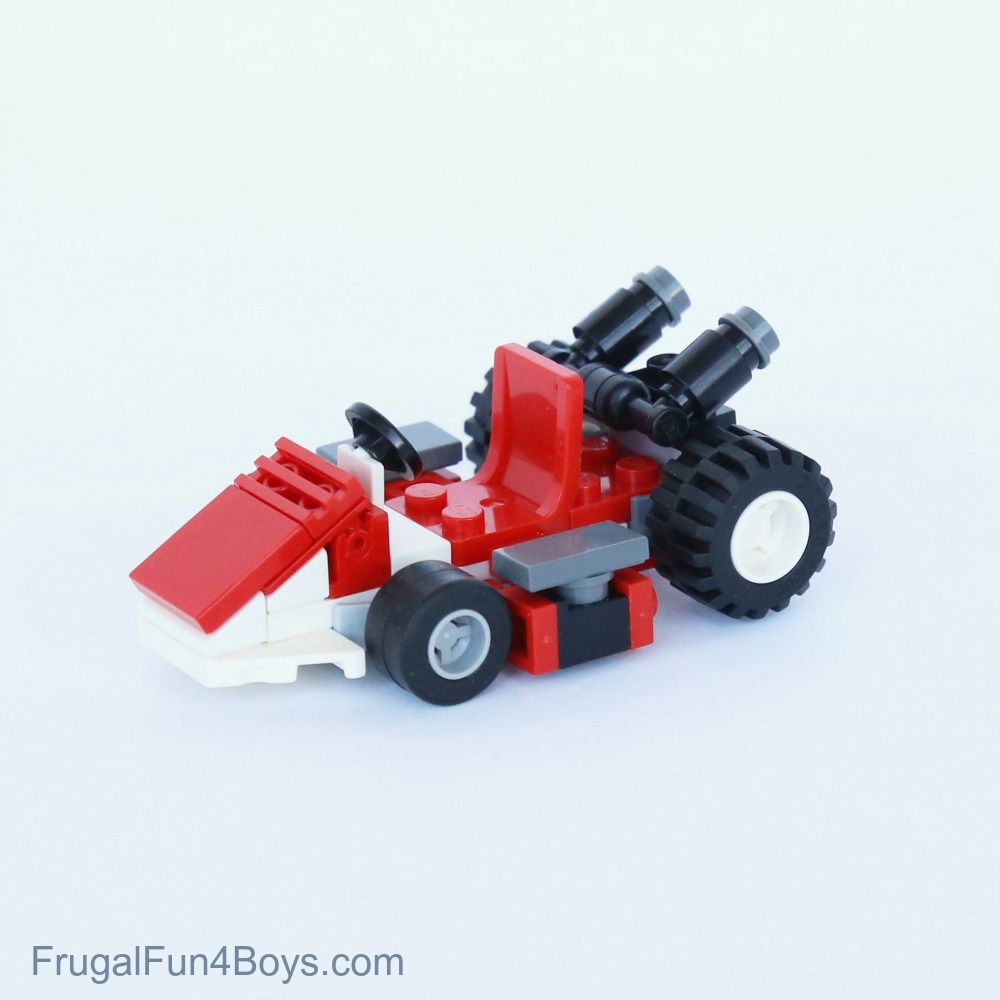 Aidan built this Mariokart Standard Kart S using the instructions he found at ReBrick. When he built it, we were able to click on the link above the photo to see the directions. Today that link says “file not found.” I will check back to see if it’s working later – if not, we may be able to add some instructions.

Isn’t this fun? This one should be pretty easy to build from the photo.

The box is open in the middle. The mushroom is sitting on top of a stack of 2 x 2 bricks to boost him up to the right level.

Here’s another view of the mushroom: 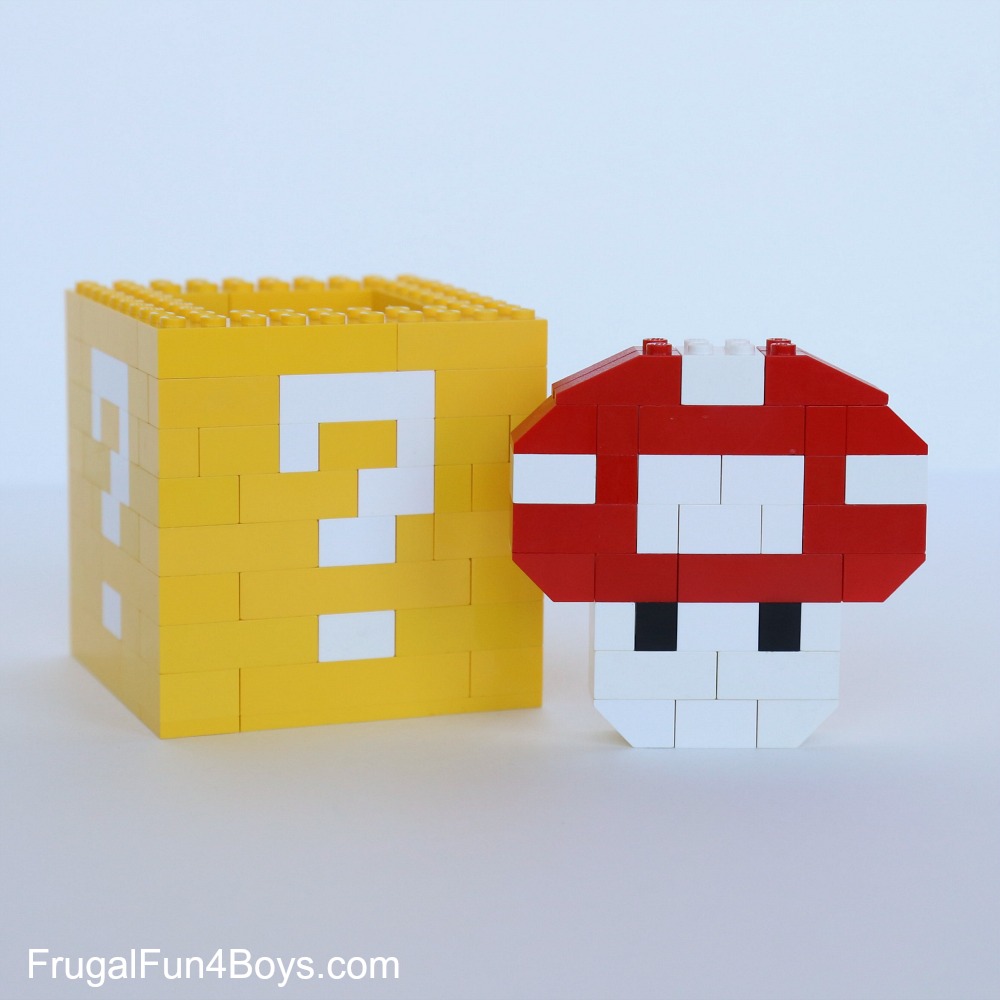 Yes, the flower does not come out of the tunnel. We should have built the chomping flower for that, but this was easier by far. 🙂 If you’d rather put the flower on the question box, then feel free to do that. If you’re not a Mario purist, then I thought this was cute! 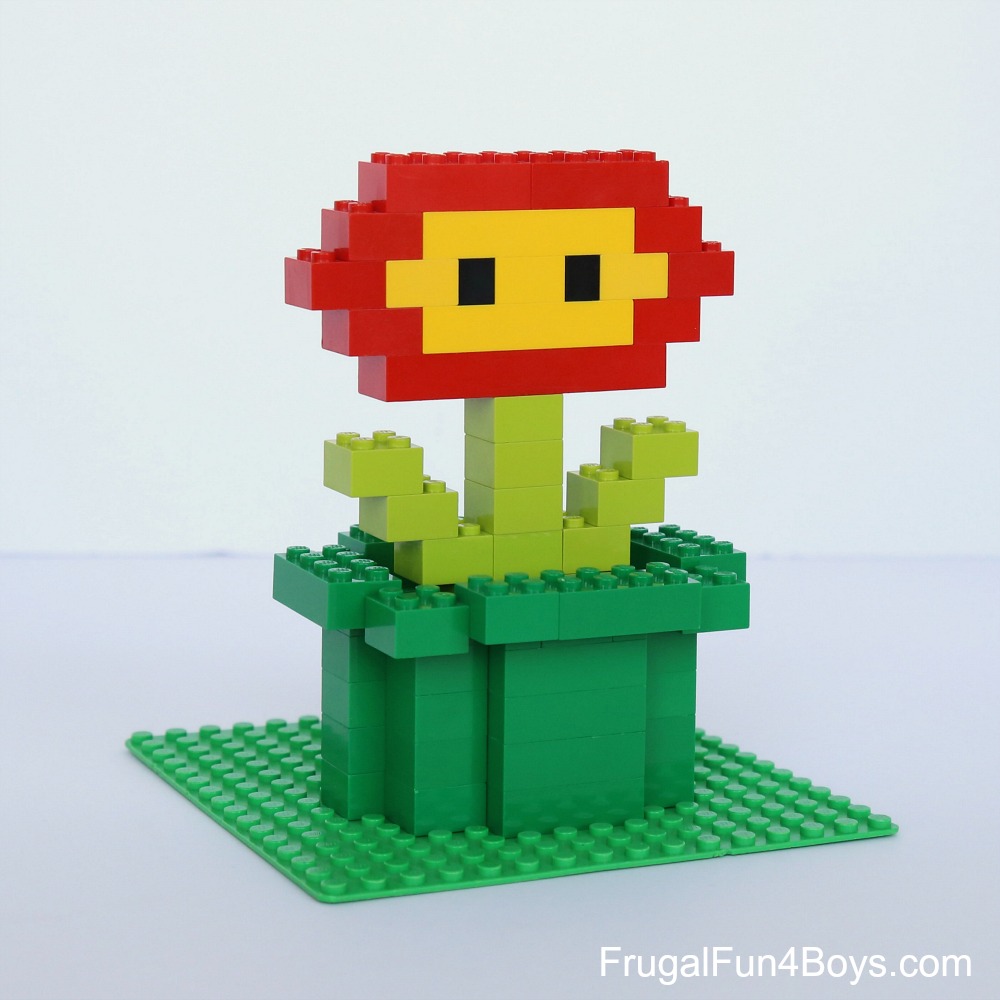 Aidan (age 12) designed this one! He and I worked together on two different versions, and we weren’t happy with either one. Aidan took it all apart and made this Yoshi, which I think is adorable. 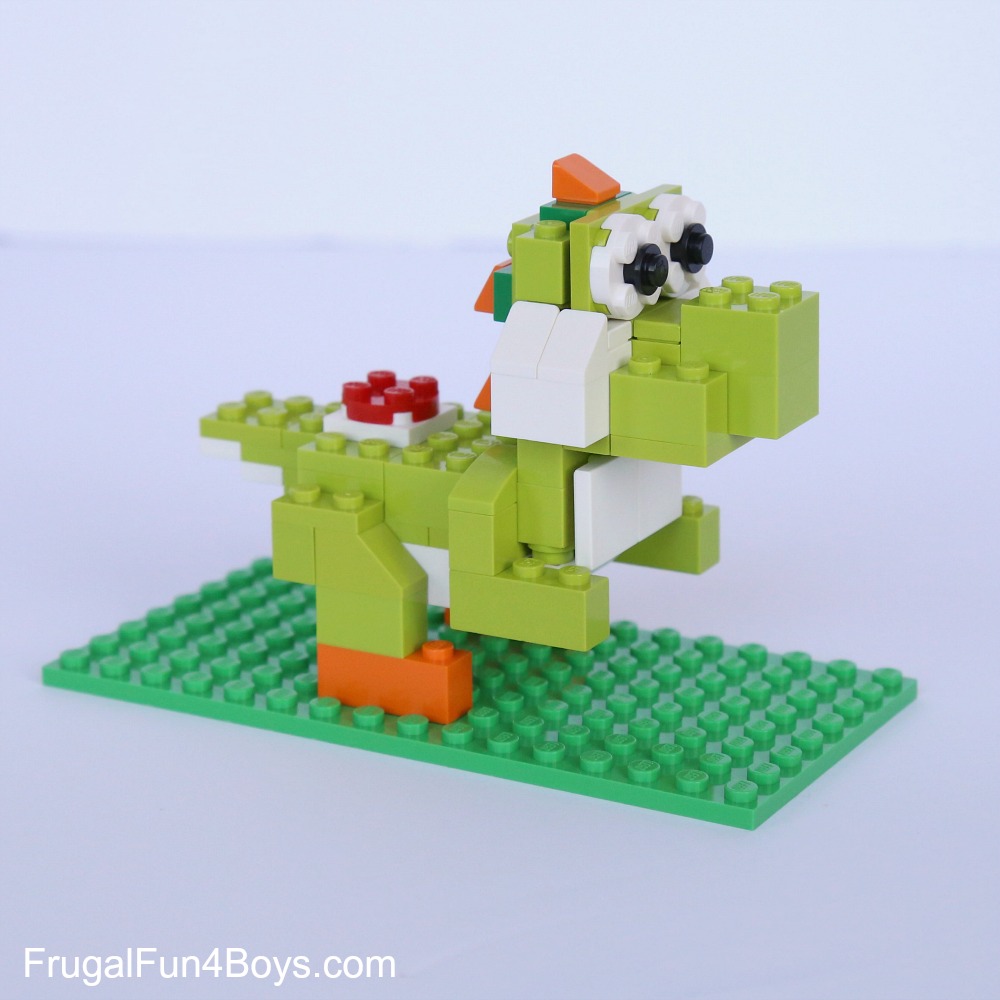 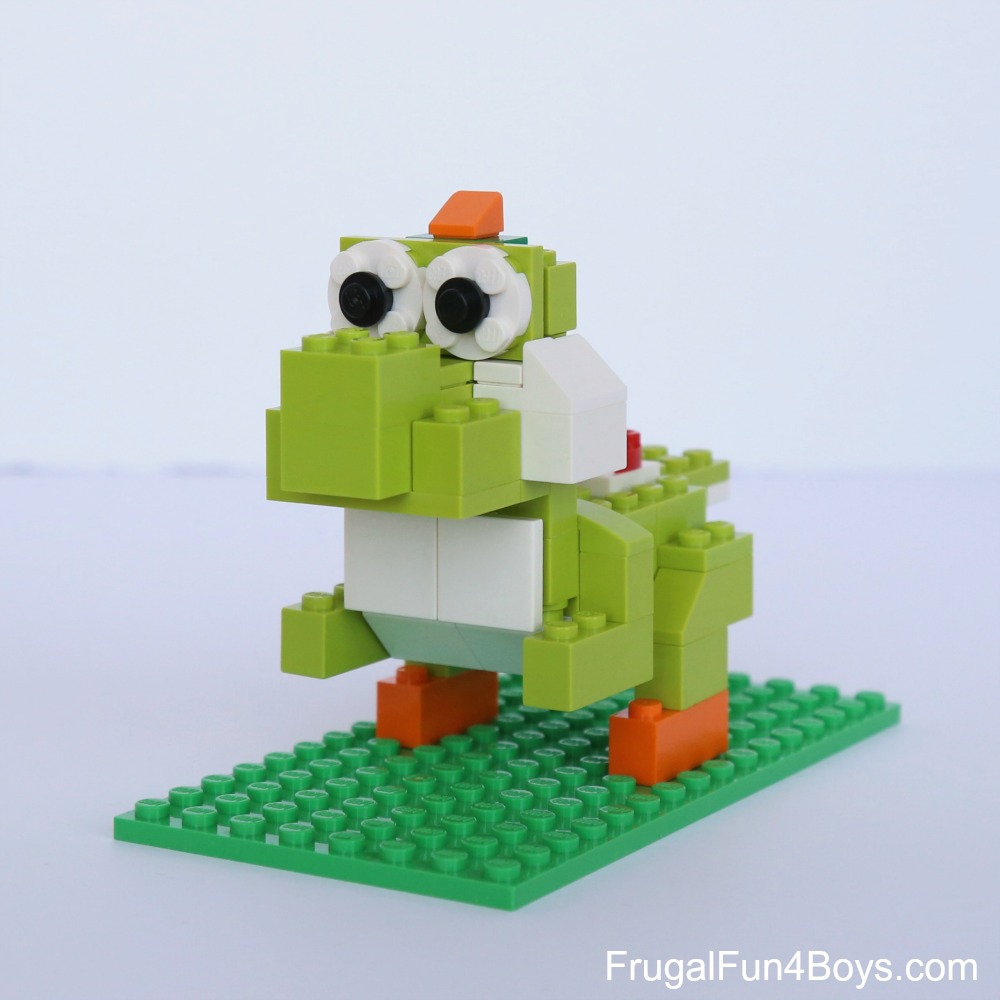 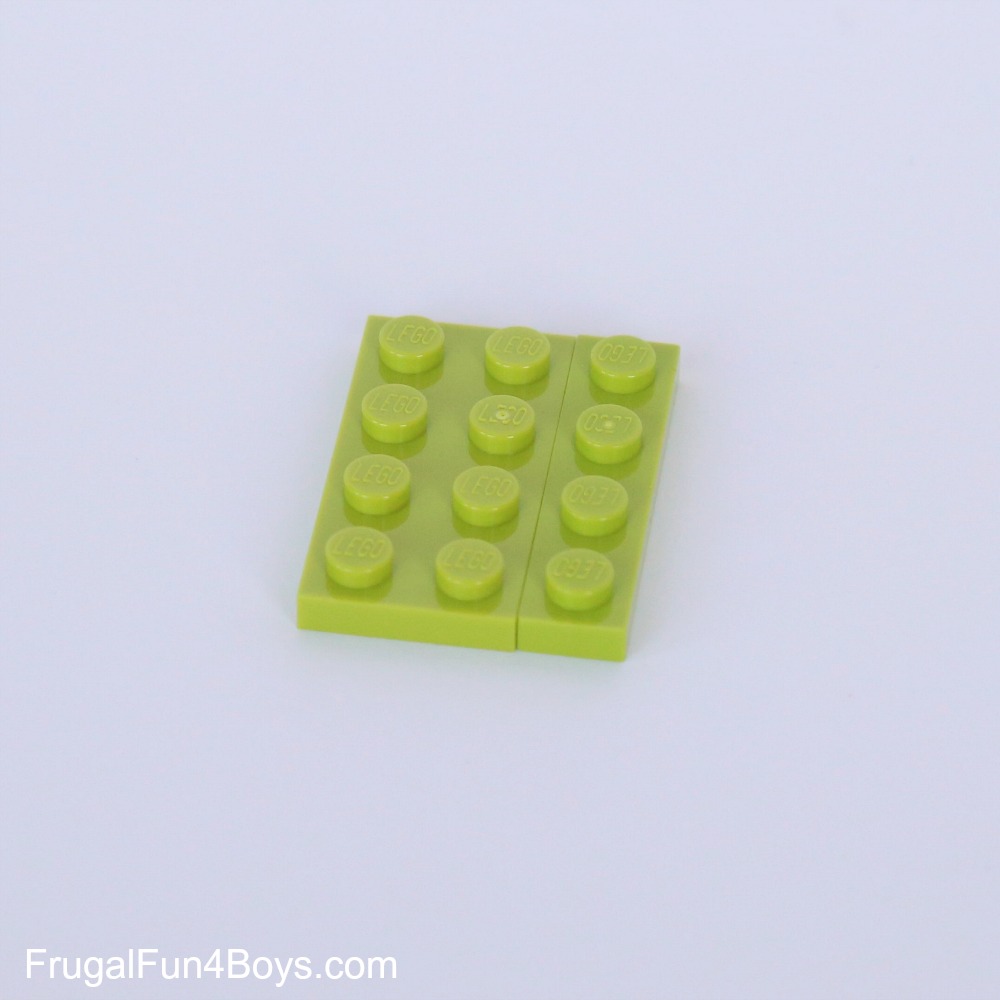 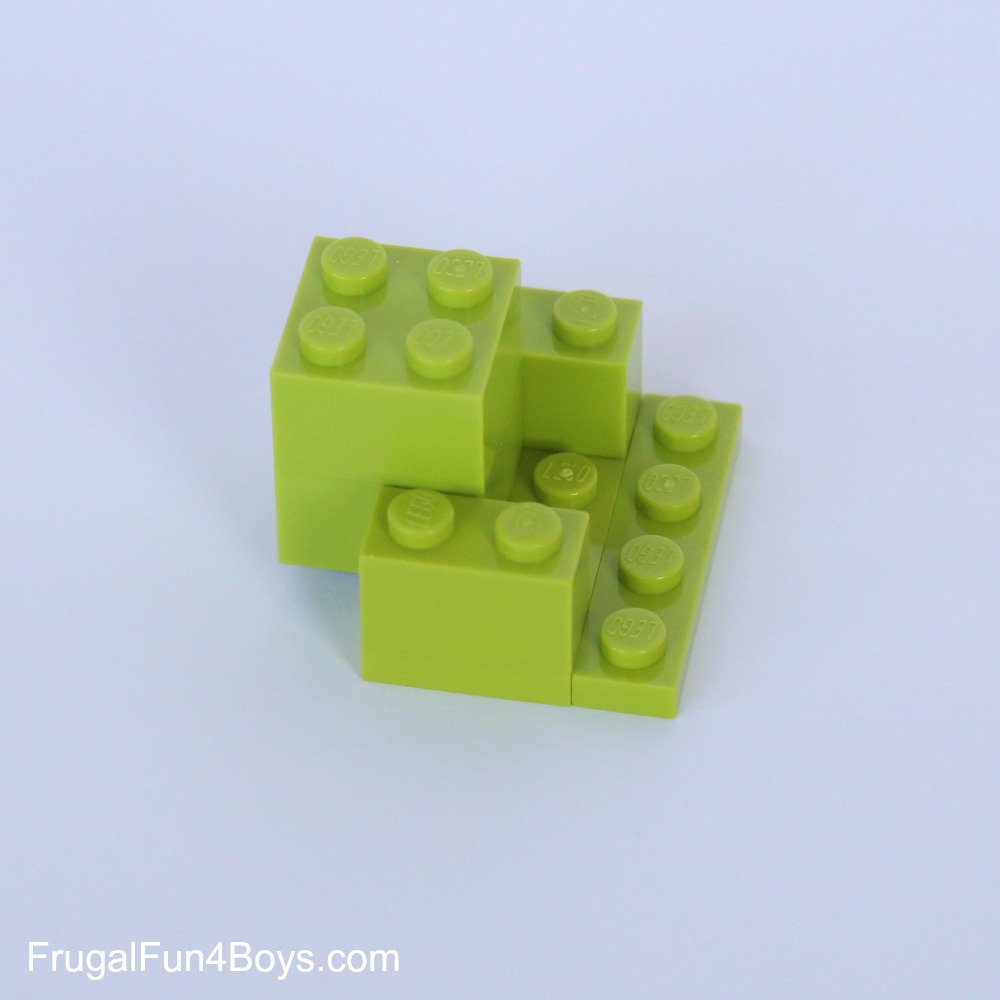 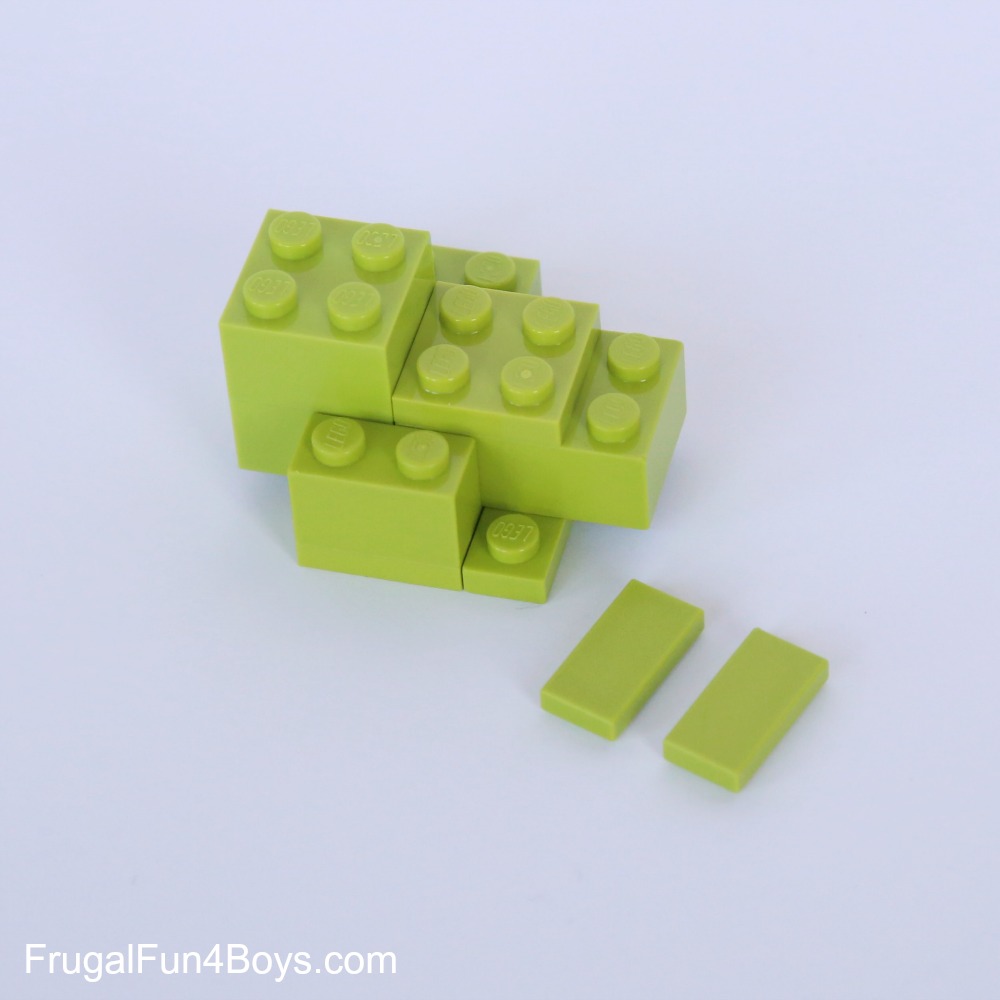 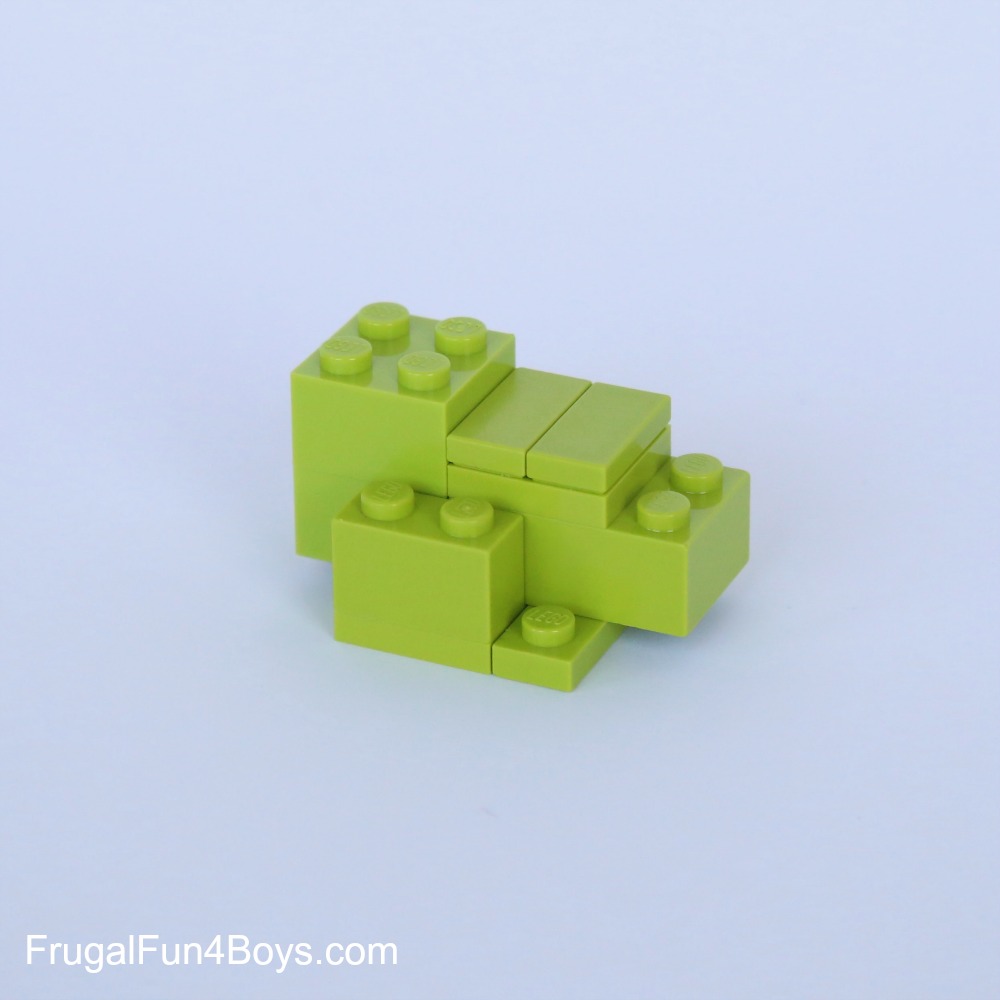 Step 5: Find the gray brick shown below. Green would also work – we just don’t have very many of those! 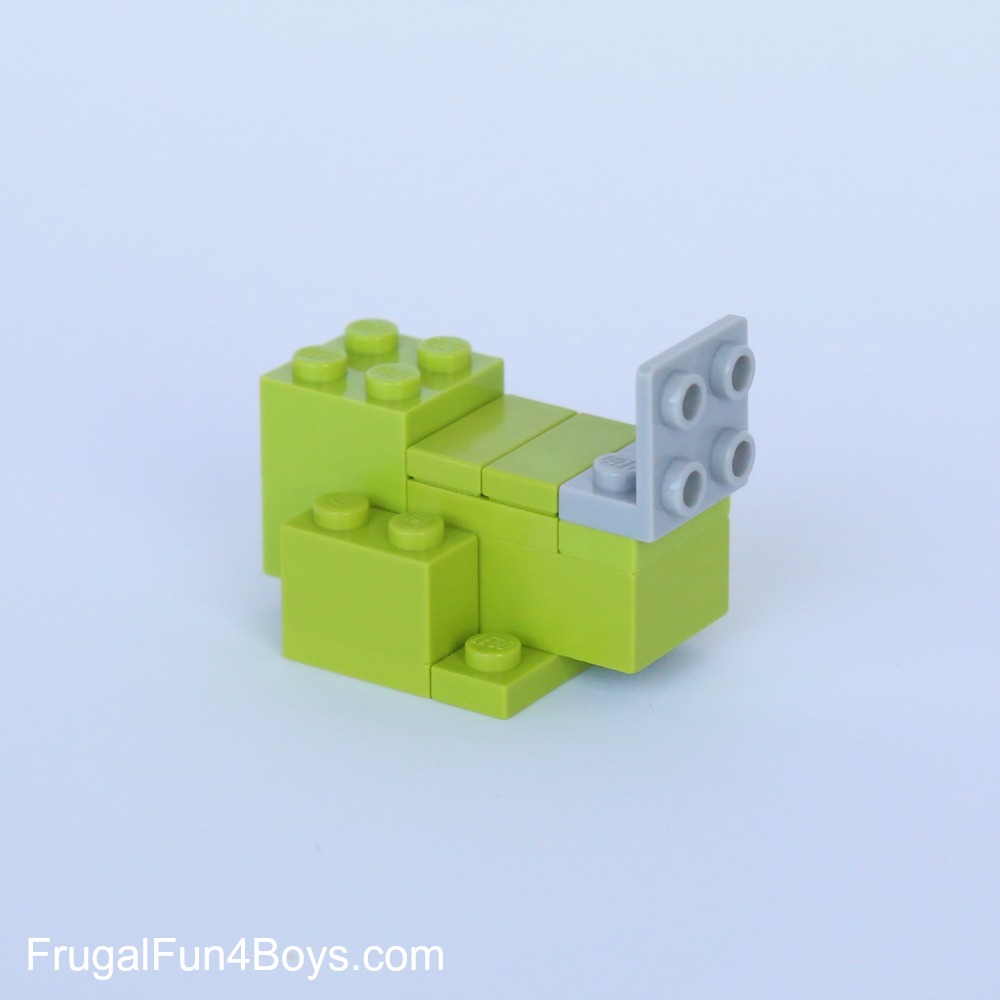 Step 6: Find another brick just like the gray one (we used green this time). Attach it to the two studs on the gray brick so that it faces the opposite way.

The eyes are made with a 2 x 4 flat brick, two round 2 x 2 white bricks, and two 1 stud round black bricks. Attach the eyes to the green vertical brick. 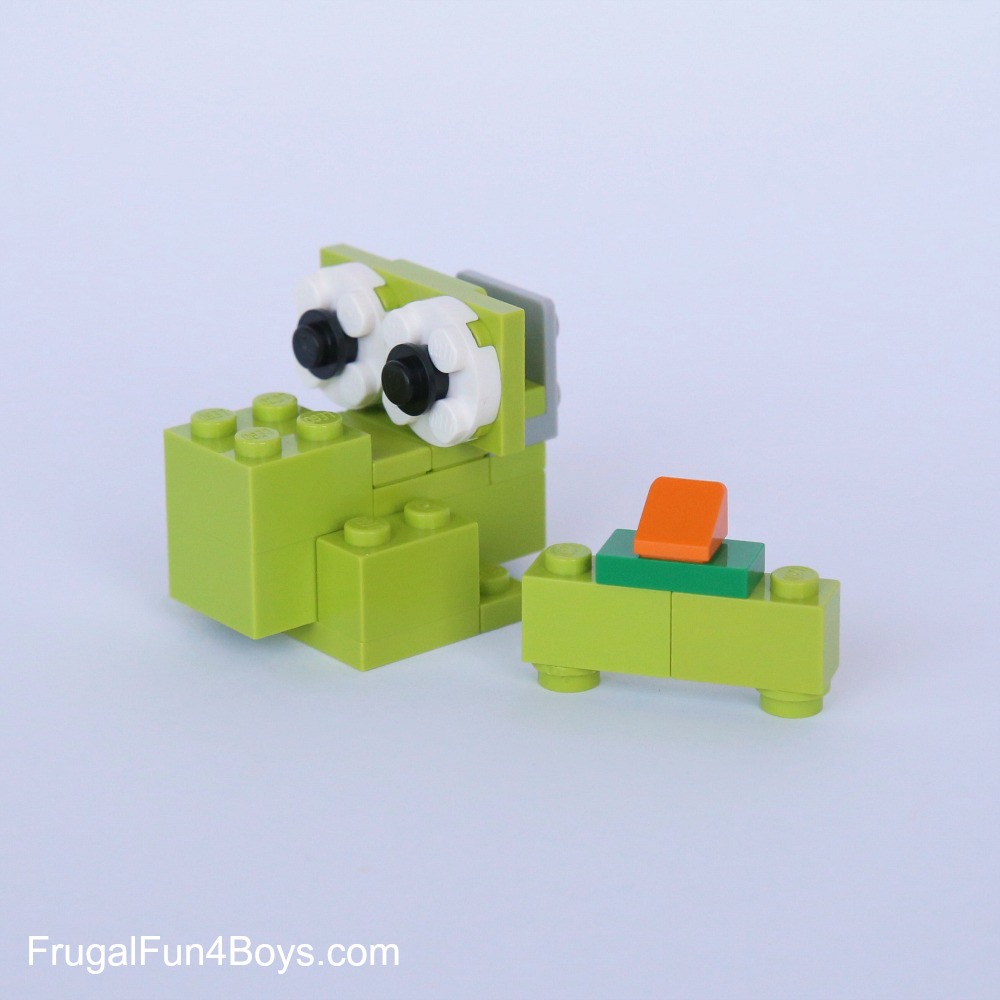 Step 7: Build the top of Yoshi’s head (also shown in step 6) and build the cheeks. We ordered the little white slope bricks for our LEGO® cats. Hopefully you have pieces like this, or something similar. 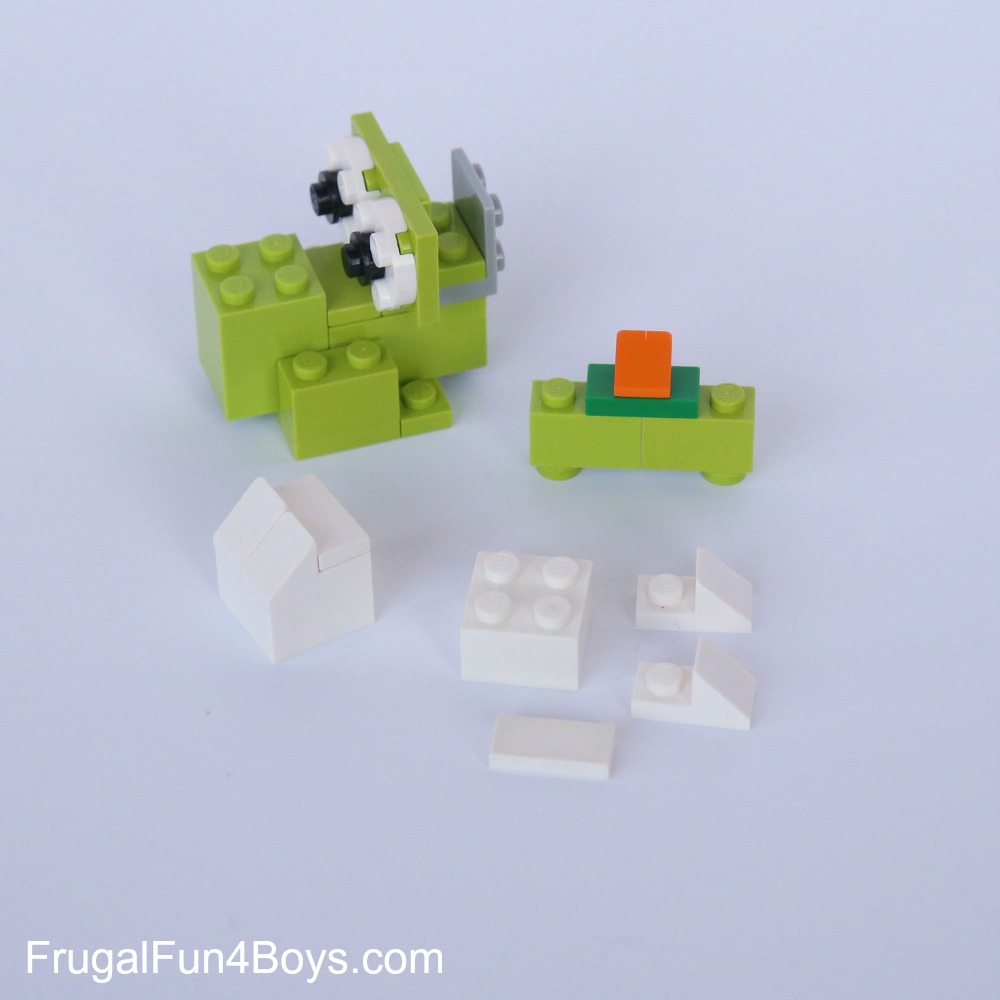 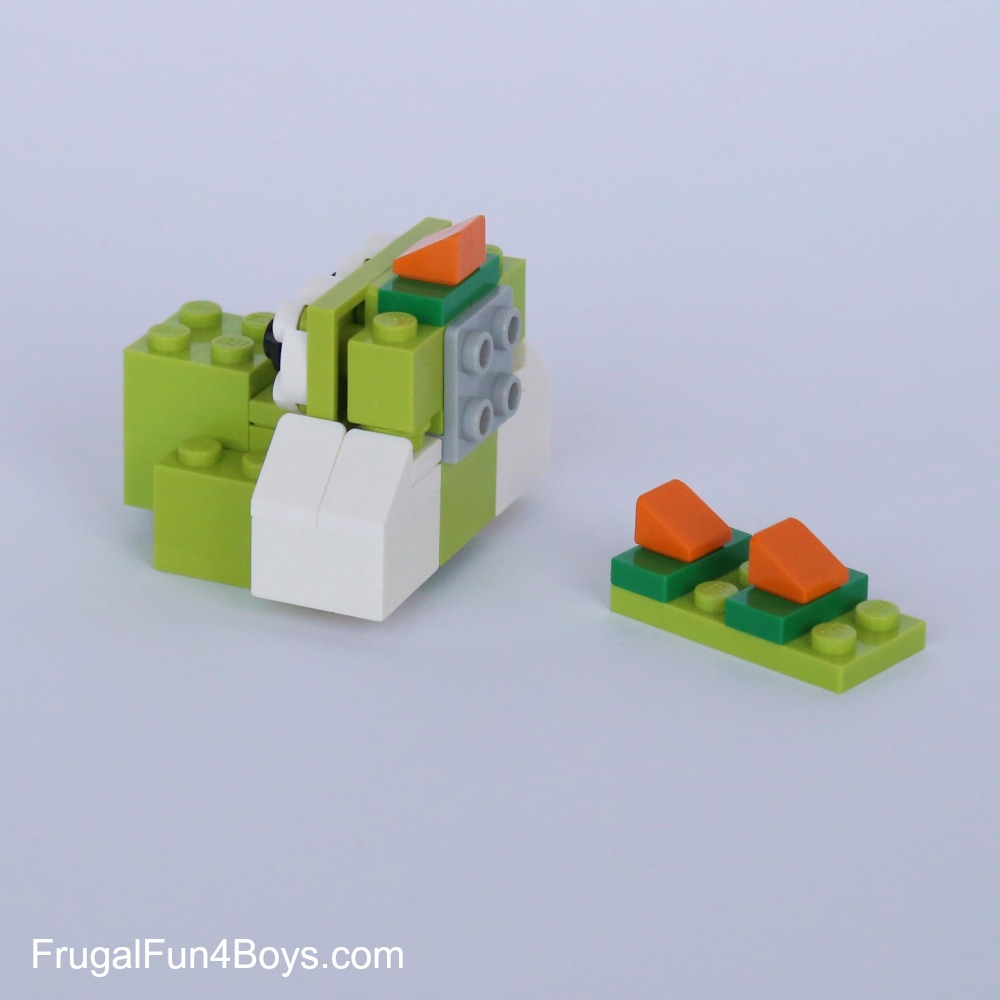 Step 9: Turn the head over and add a 1 x 4 brick to the bottom of the head. It should attach to the cheeks and the green brick in between. 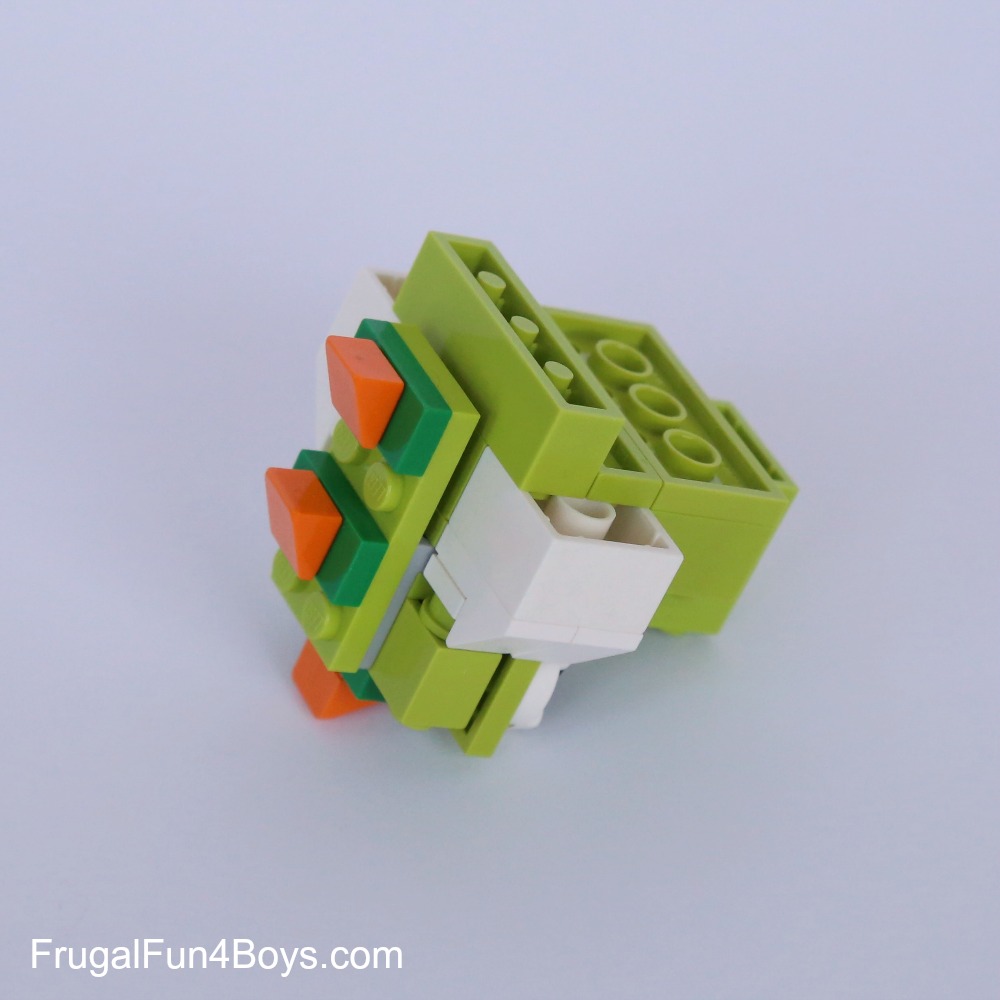 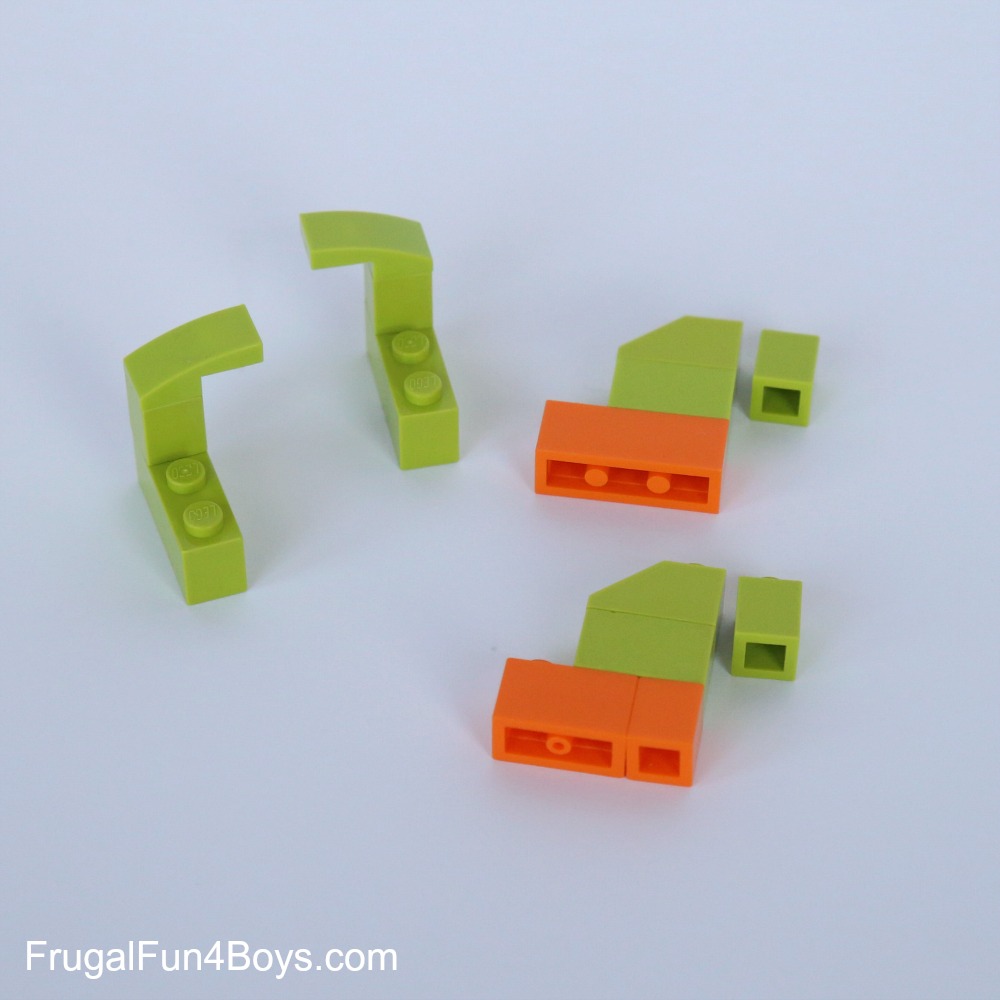 Step 11: Build Yoshi’s body. Use whatever pieces you have, but make sure that you have a flat piece sticking out on both sides for attaching the legs. We used another one of those green bricks that has studs on the front for attaching some white bricks to be Yoshi’s belly. 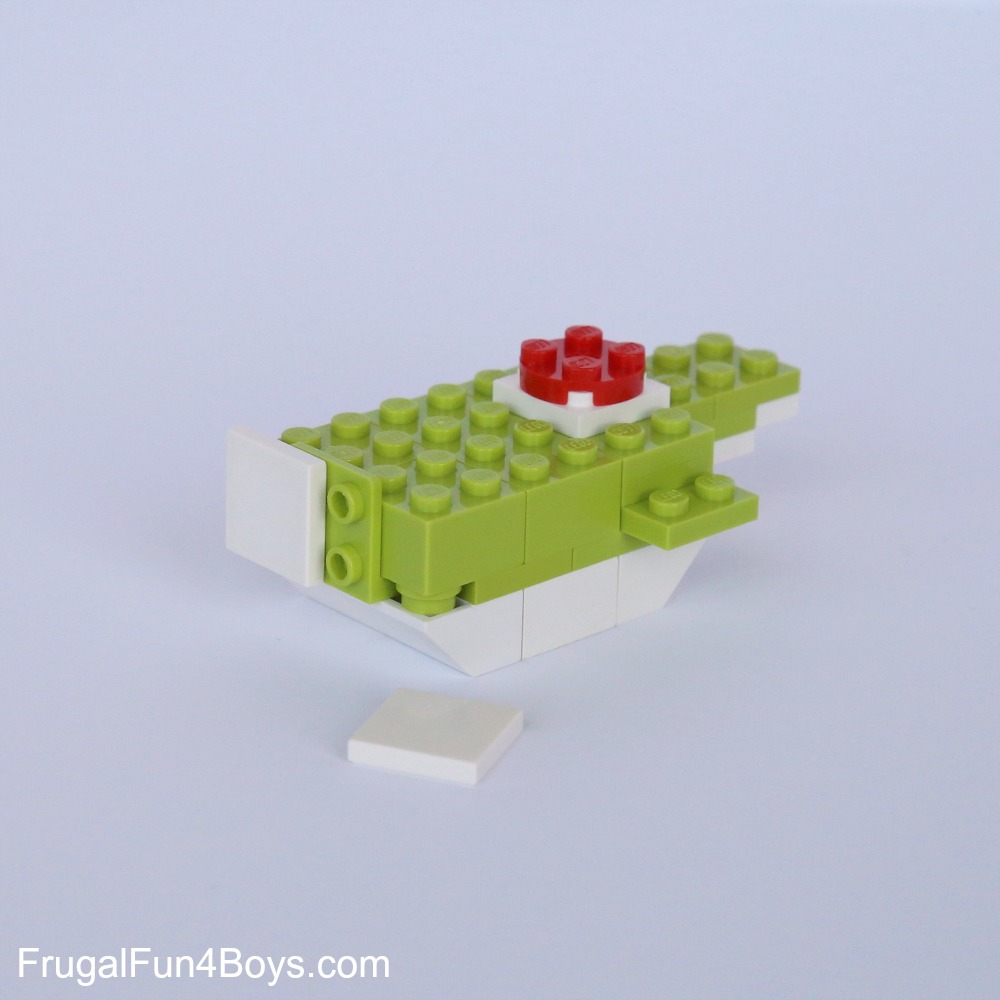 Here’s another view of the body. 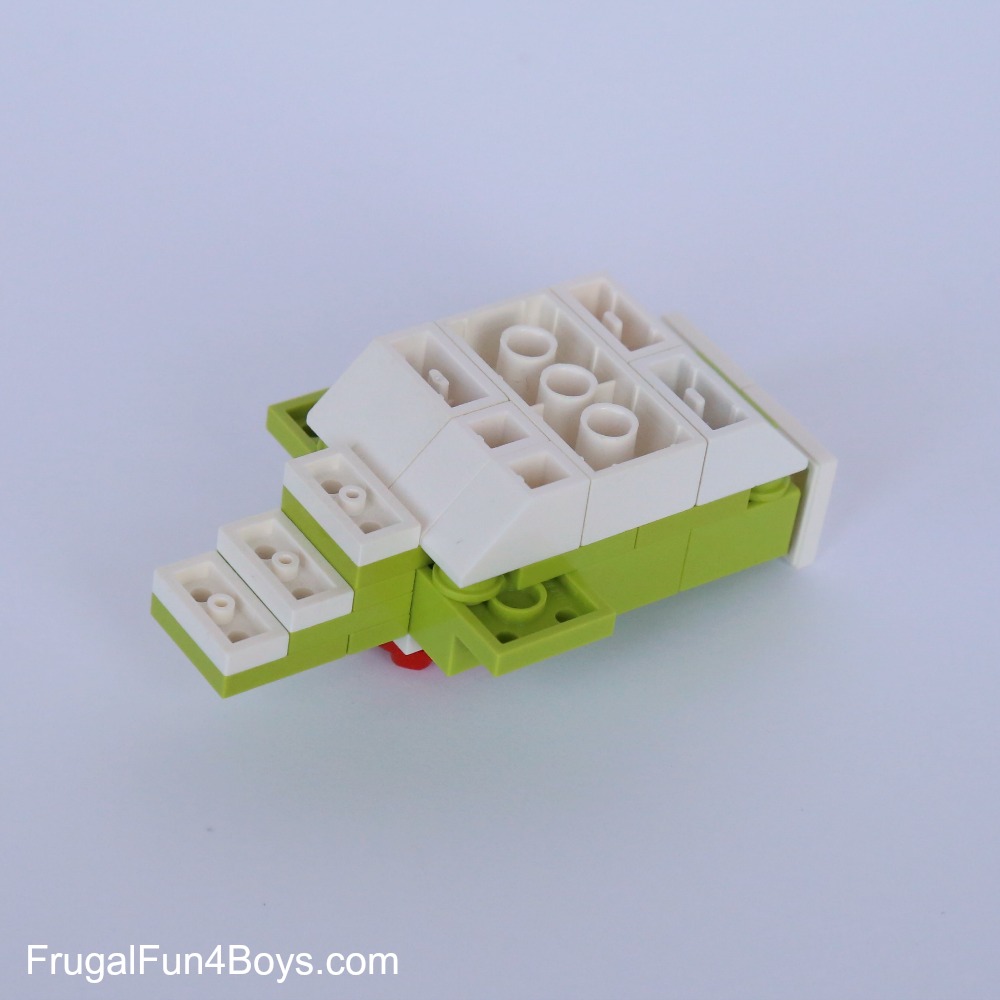 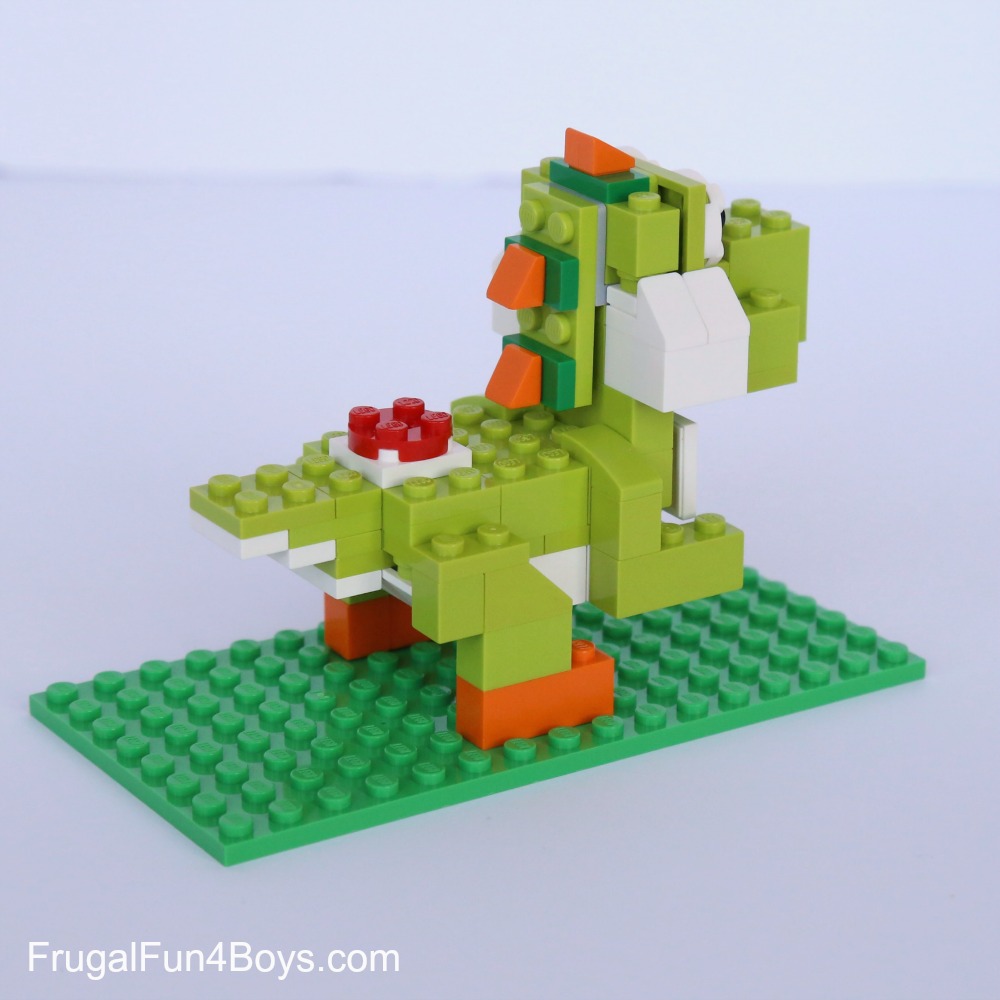 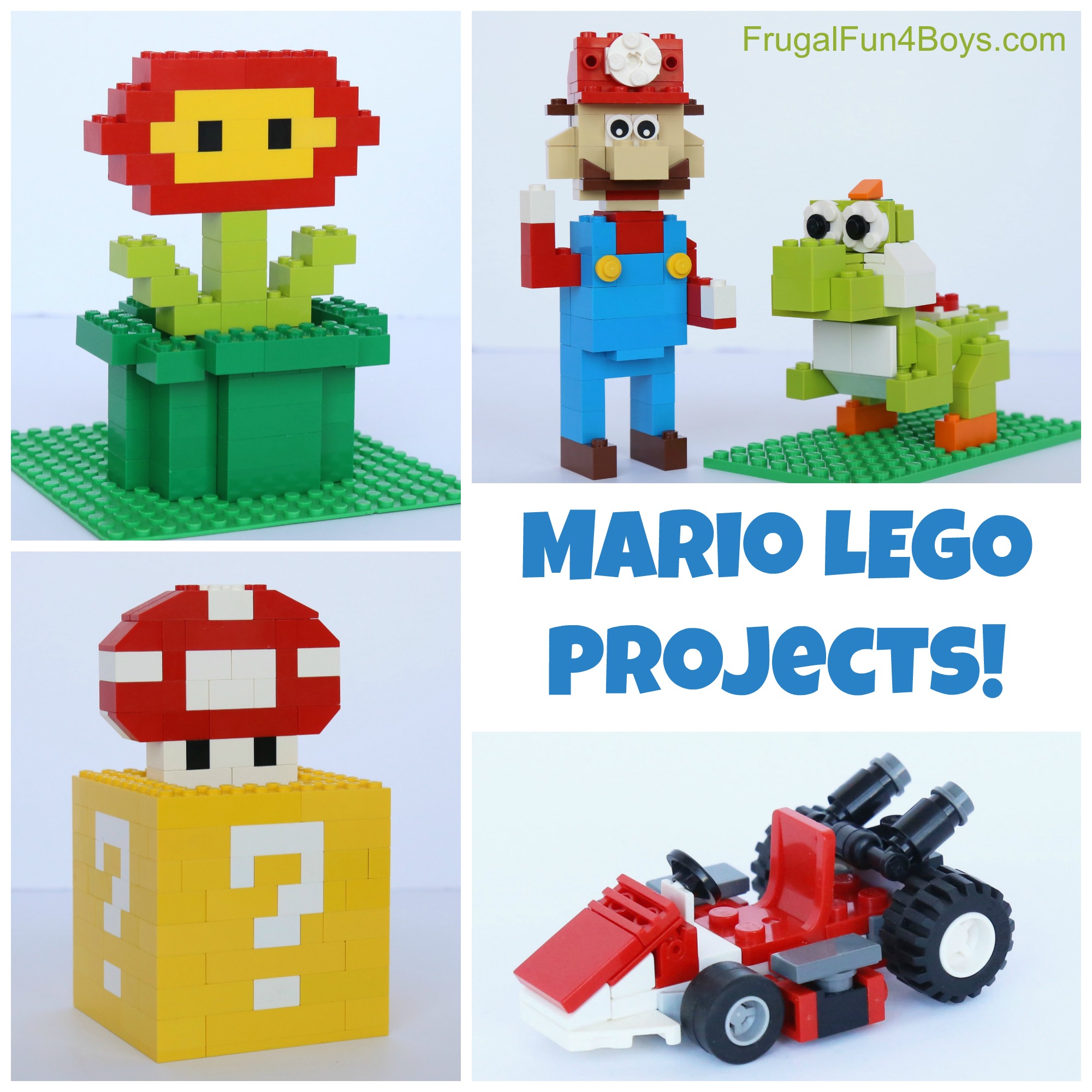