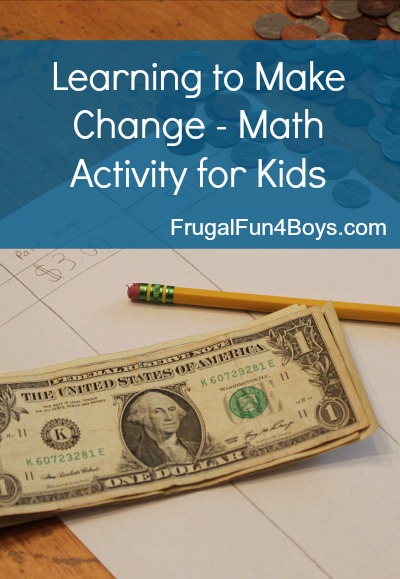 Learning to make change can be a difficult skill for kids to learn. Counting change is hard enough (why is a dime worth more than a nickel when the nickel is bigger?), but making change really seems abstract at first to many children. Gresham (2nd grade) and I worked on making change in the early fall as part of his math curriculum (Making Math Meaningful from Cornerstone Curriculum), and he totally didn’t get it. Four months later, he now seems much more developmentally ready to master this skill.

If your child struggles with making change, it helps to break down the skills involved.

Skill #1: Understanding that I might not have exact change at the store. I might have to hand the cashier more money than my total purchase amount, and then I’ll get change back.

It’s so easy to take this understanding for granted! I mean, it’s obvious to us. But then I watch Owen (age 4.5) shop at Target and walk away amazed that he spent his money (one bill) and came away with a toy and lots more money (several coins!!).

I truly think that the concept of change is best learned through experience. Gresham earns and spends allowance money ($2 per week), and he also saved for Christmas gifts and paid for them himself. Every time he shops, he gets a little better at the concept of paying and receiving change back.

This is easy to practice. Make a list of amounts – 50 cents, 63 cents, 27 cents, etc. Help your child figure out how much is needed to get to a dollar. Start by counting the pennies needed, etc.

50 cents to get to one dollar

So that’s 3 pennies, two dimes, and two quarters for a total of 73 cents.

At first, they will probably do things like 3 cents to get to 30 cents, 7 dimes to get to one dollar. That’s a great first step, and you can work towards using a more efficient amount of coins later.

Skill #3: Understanding that the amount of change owed is the difference between the purchase amount and the amount of money you paid with.

Today, we set up this chart: 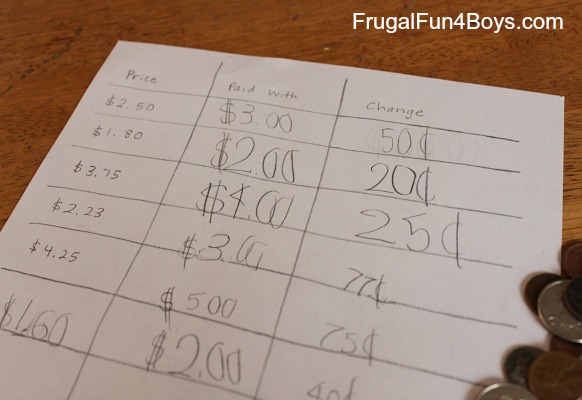 I gave Gresham five $1 bills and a pile of change. He had to figure out how many bills to pay with and then how much change he would receive back. The chart went really well, and he enjoyed the activity!

We will keep practicing on making change, probably with a pretend store next time. I really want my kids to have solid number sense and to be able to figure out change without needing a calculator. Calculators have their place, but one can really be at a disadvantage if unable to recognize basic money mistakes.