Math Facts Baseball – Use this simple game to review addition and subtraction facts!

Okay, so baseball season just ended, so this probably should have been a football game. But I randomly thought of this idea one afternoon, and the boys have been loving it. In fact, the day after we first played this game, my 6 and 9 year olds got it out after breakfast to play it some more. And then when we took photos of it, they kept on playing after I was done with the camera. It’s always great to find a math practice game that is fun enough that kids choose to play it! 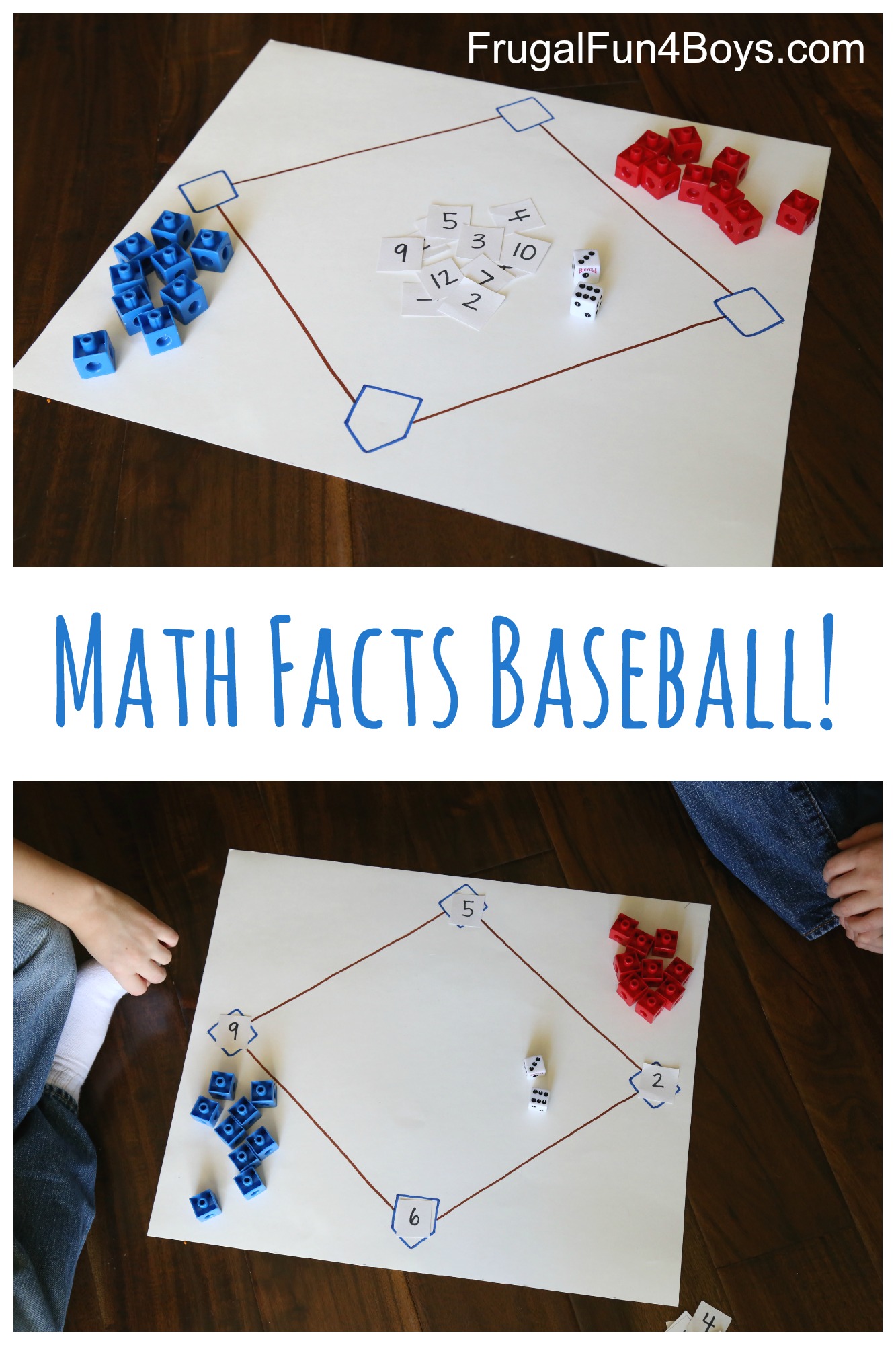 Here’s what you need to set up the game: 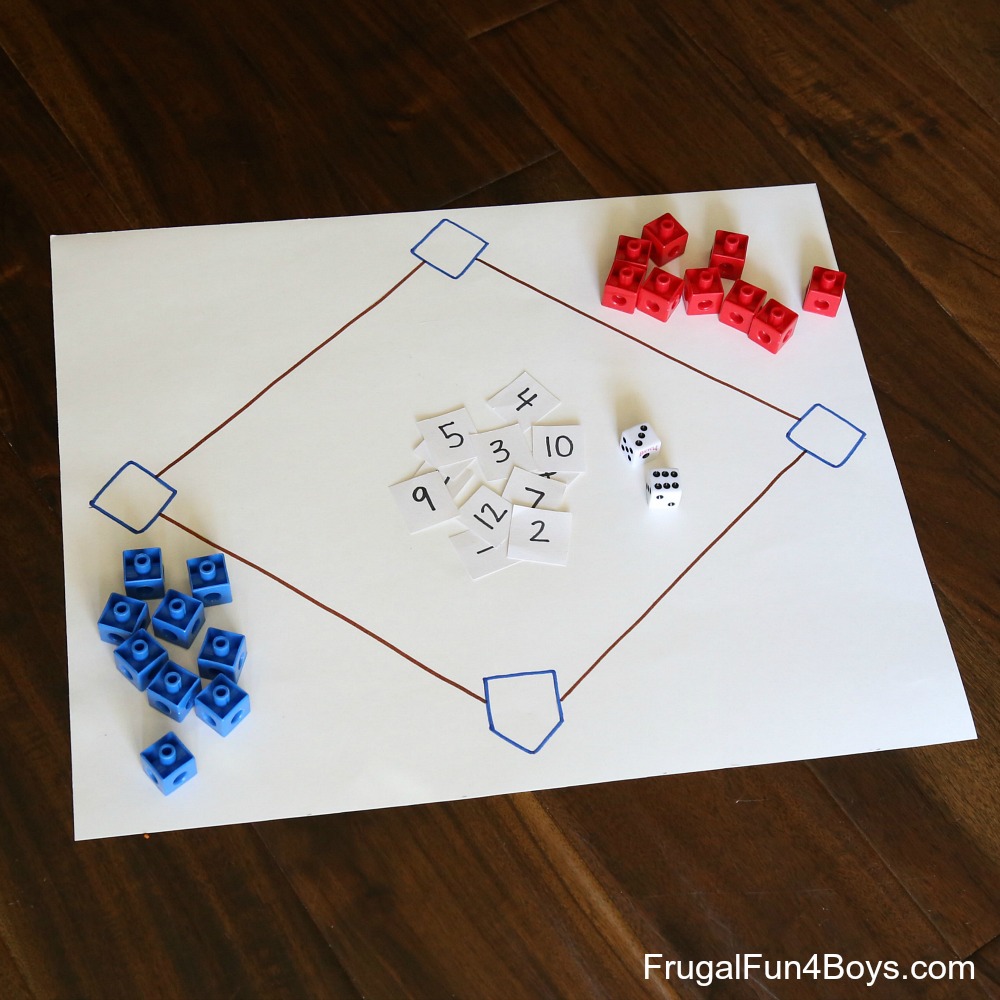 Label each base as well as home plate with your number cards. These numbers will change each inning.

The game is played by rolling two dice. The player can either add the two numbers or subtract one number from the other. For example, if a player rolls a 2 and a 5, he can count that either as 2+5=7 or 5-2=3. If the player can create a math sentence from the dice that equals one of the numbers on the baseball field, his “batter” (math counter) runs to that base. If the numbers rolled cannot be used to create a math sentence that matches one of the answers on the board, then that is an “out.” (We didn’t do strikes – the game would go on forever!) If you can make a math sentence that equals the number on home plate, you get a home run! 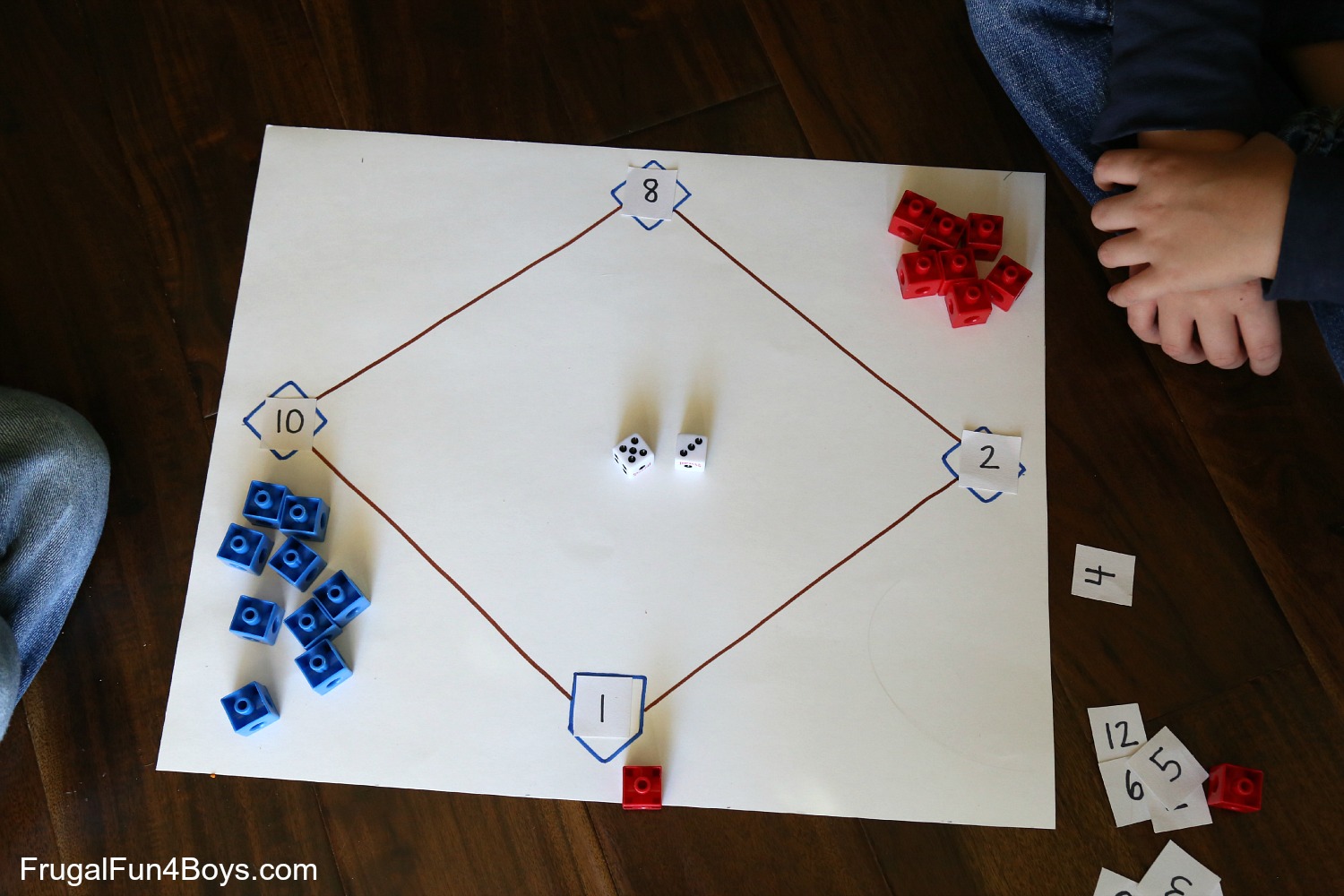 Sometimes, a player will roll a combination which yields two possible answers that are both on the board. In the photo above, the player could either do 5+3=8 or 5-3=2, both of which are on the board. It was good for my 6 year old to have to use some strategy here – the 8 is the better choice since it’s on second base!

Each player continues their turn until they have rolled three “outs.”

If there are counters on the bases and the player rolls another hit, then all of the counters will run that number of bases. So for example, if there are runners on 1st and 3rd and the player rolls a 1st base number, the runner on 1st will go to 2nd and the runner on 3rd will run home. If the child had rolled a second base number with counters on the bases, they would have all moved two bases, and so on. This sounds complicated, but I was surprised at how quickly the boys picked it up!

Here is how we kept track of the score: 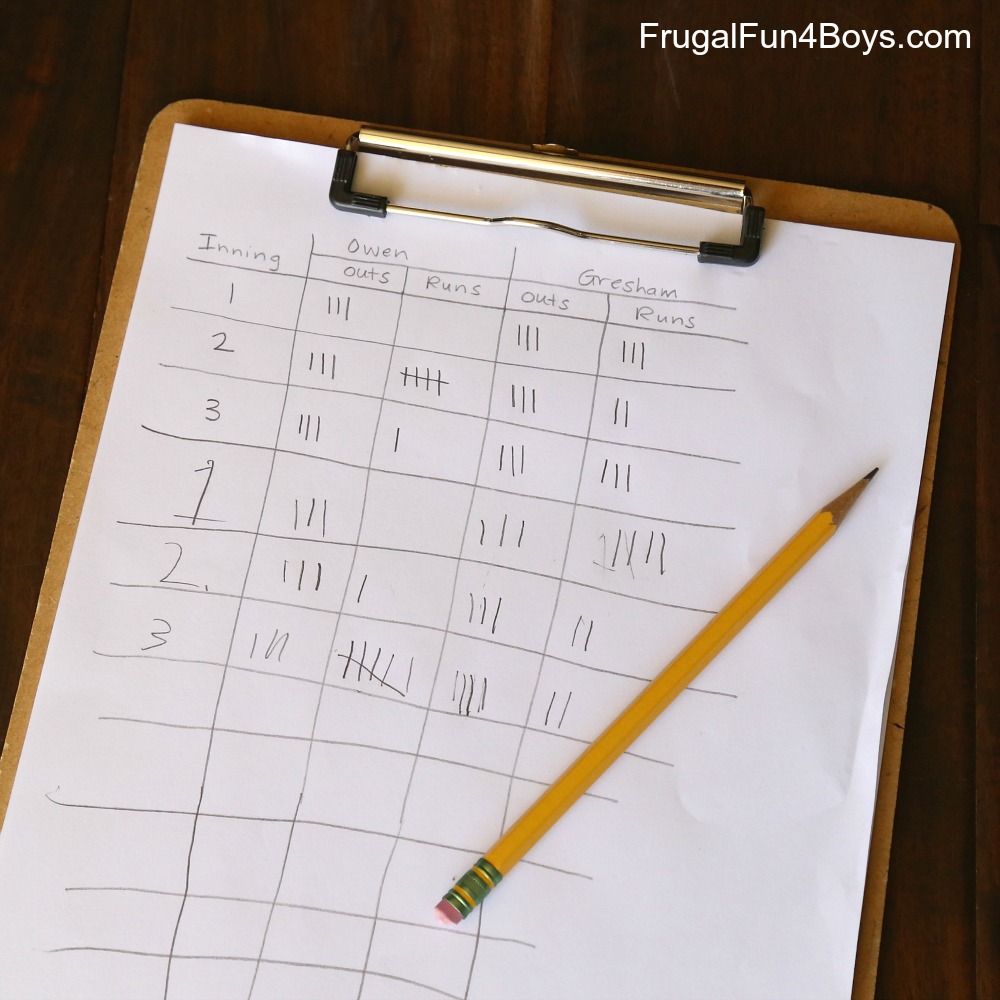 I made a chart with a column for each boy and then within those, a column for outs and runs scored in each inning. We have been playing three innings at a time – that seems to be a good length to the game. 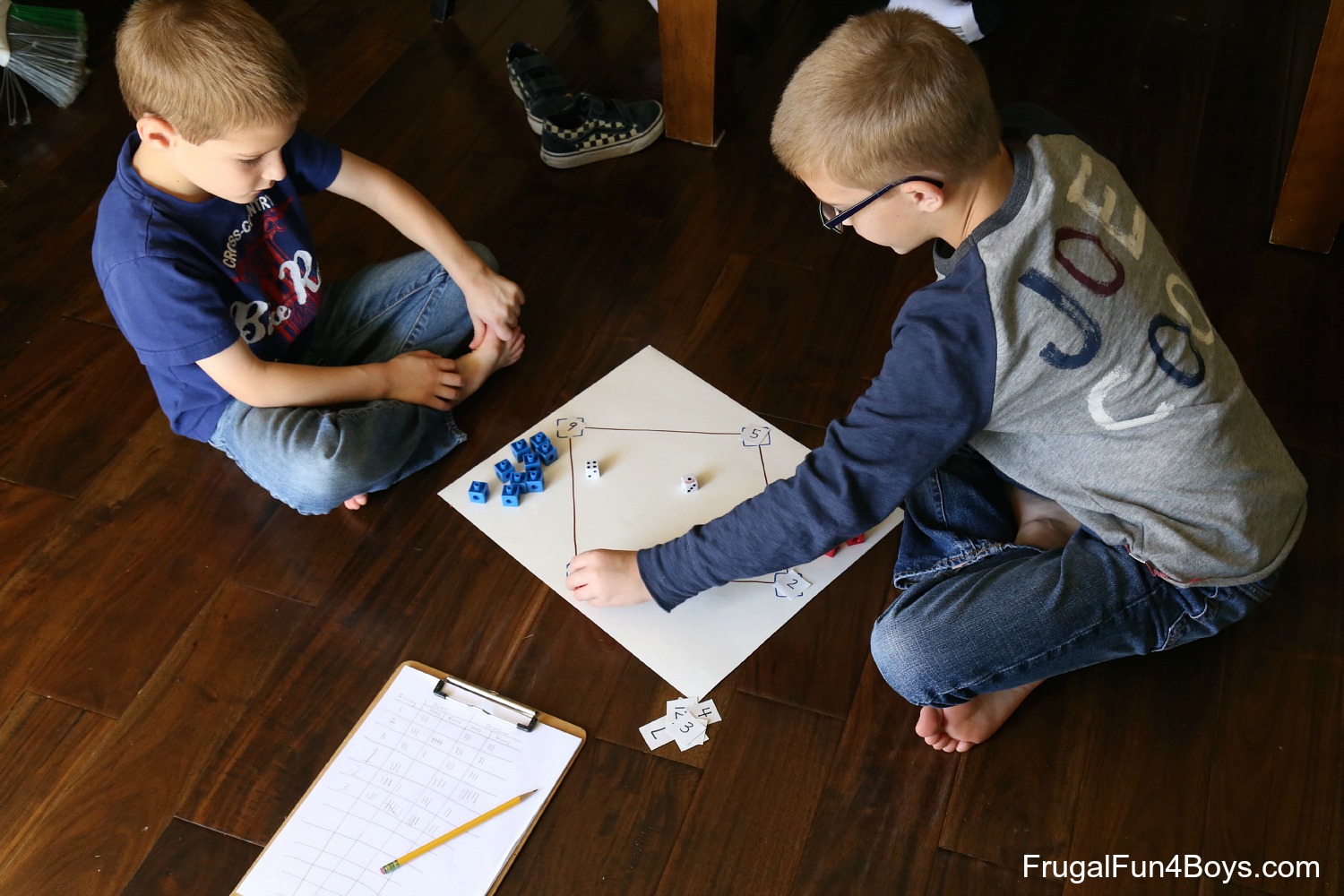 When we roll two dice, is there an equal chance of getting each answer? We had started with the numbers 1-12. Is there an ideal way to label the bases that will give the greatest chance for rolling a hit? 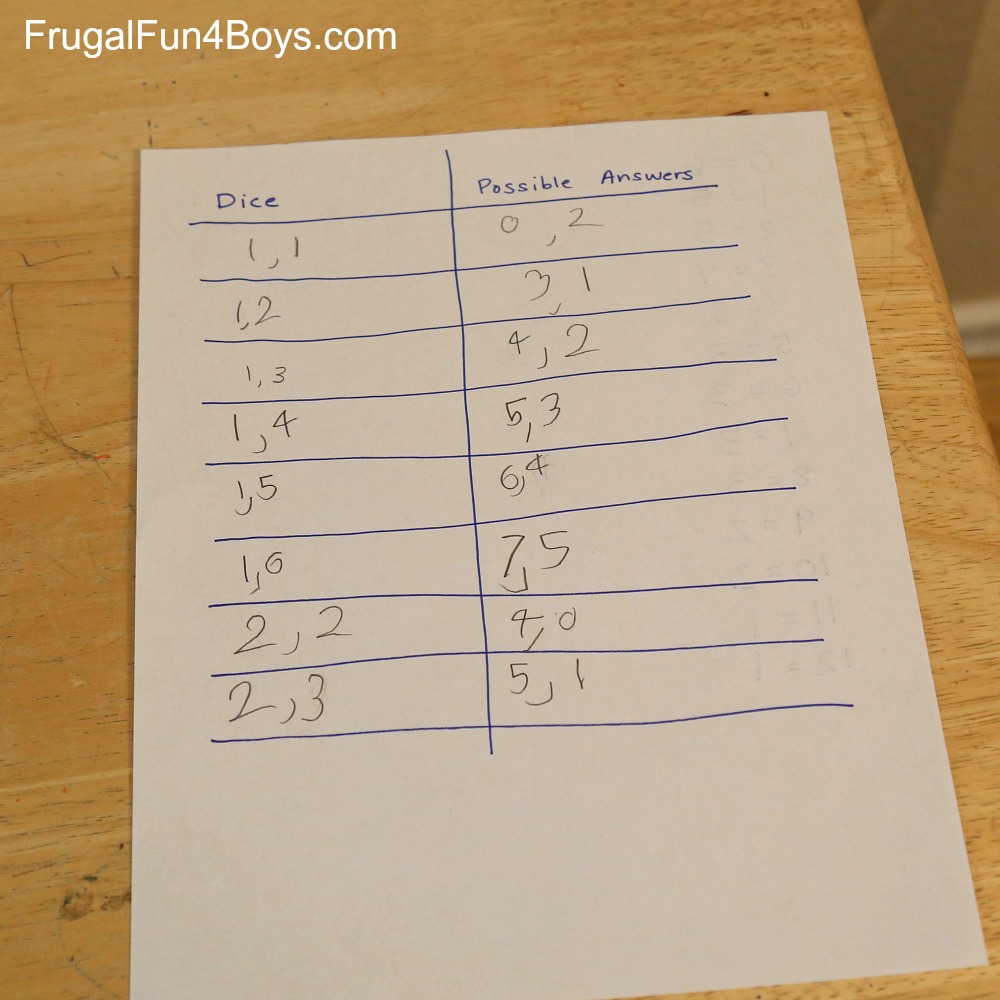 I knew that he would be tired after this much, so I had already made a chart with all of the possible outcomes.

Using my chart, we made a list of how many different ways each number could be rolled. Here’s what we found:

*NOTE: We did not count a roll of 2,1 to be different from 1,2. But that would be a great way to do this with older kids! Using dice of two different colors would help.

What other observations can we make from this chart? (These are great things to draw out from kids during a discussion.)

We should have had a 0 card! We had not used one in our initial game, and we were missing out, as 0 is the most likely possible outcome.

You can only get a 0 when you roll doubles.

Anything above a 6 can only be made with an addition sentence, not a subtraction sentence.

Lower numbers on the bases will yield the highest number of runs in the baseball game.

And then, we figured out if the game would work with multiplication.

Gresham (fourth grade) had been wanting to do the game with multiplication and division. I knew that division wouldn’t work very well because 3 divided by 2 would be 1.5, for example. But how many number cards would we need for multiplication? Gresham thought that we would need all the numbers from 1-36, because 6 x 6 is the highest possible roll, and that would be 36. He was on the right track, but not quite…

We made a chart to list the possible outcomes for multiplication. There are actually only 18 possibilities! There were 13 with addition and subtraction. BUT, the greatest number of ways to roll each possible outcome was only 2, so I’m not sure if it would be a very satisfying game. We haven’t tried it yet – if you try it, be sure to let us know!

Expand the game with math dice.

Another way to expand this game would be to use math dice that have 12 sides and the numbers 1-12 on them. Of course, that would greatly increase your possible outcomes… 🙂