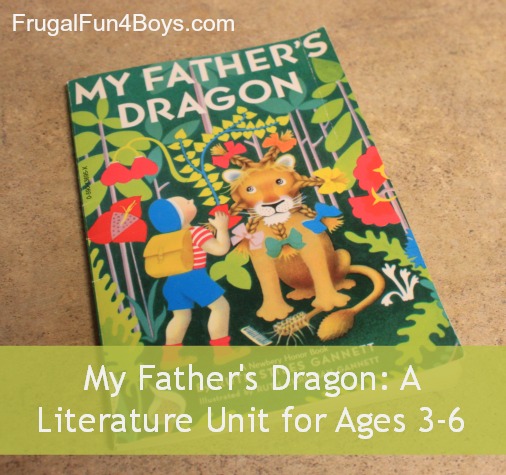 When I was in college, my elementary reading professor gave each of us a copy of My Father’s Dragon by Ruth Stiles Gannett (Amazon Affiliate link). I can’t remember if I read it when I got it or not, but it was the first chapter book that I read out loud to Aidan at the age of 4. This book is such a treasure for young children. At just 10 short chapters long, it’s a great choice as a first chapter book to read out loud for ages 3-7 or as a book for 1st-3rd graders to read independently.

If you’re not familiar with the story, My Father’s Dragon tells the story of the boy Elmer Elevator (referred to by the narrator as “my father”) and his adventure rescuing a baby dragon from Wild Island. Elmer meets a cat who tells him about the baby dragon and how the animals of Wild Island are treating him cruelly. The cat tells Elmer that he could have the opportunity to fly by going to Wild Island and rescuing the dragon. The cat tells him what to pack in his knapsack – an interesting list of things including chewing gum, hair ribbons, and a toothbrush and toothpaste. As he encounters each wild animal, Elmer uses something from his knapsack to distract the animal and keep it from eating him. For example, he gives the lion a hairbrush and hair ribbons to make his tangled mane look beautiful.

Note: Elmer Elevator is angry with his mother for not letting him bring the stray cat home and feed him, and the book says that he doesn’t feel bad about running away for a while to go to Wild Island. I’m not a fan of how this is presented in the story, but I feel that it is a very minor part and that the rest of the story has enough redeeming value to make it worthwhile. Just be aware that this issue is mentioned in the first two chapters.

I just finished up a unit on My Father’s Dragon with Gresham (age 6 – would be in kindergarten if in public school, but we are doing first grade) and Owen (3.5). This book lends itself well to educational activities as well as imaginative play!

Elmer Elevator first travels to the island of Tangerina, and then gets to Wild Island by climbing over the Ocean Rocks. Before he leaves Tangerina, he fills his knapsack with tangerines to eat on the way.

Well, we didn’t have any tangerines to eat, but my mom had just given us several clementine oranges (not something that we usually buy), and the boys had fun peeling and eating them! 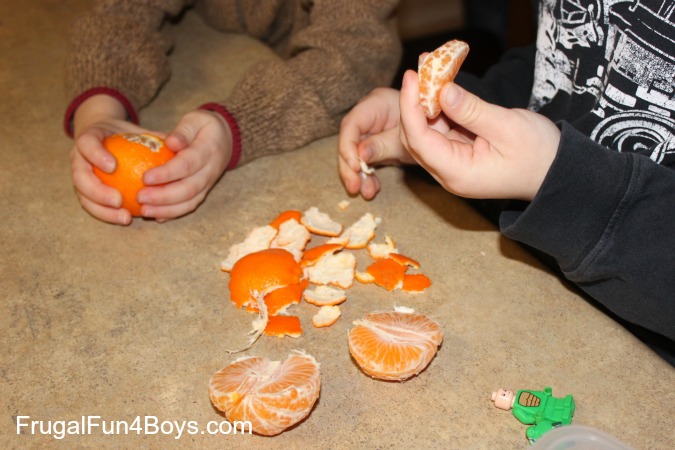 When Elmer encounters the rhino on Wild Island, he is very upset about how dirty his horn has become. Elmer knows just the thing to give him! He pulls a toothbrush and toothpaste out of his knapsack and shows the rhino how to use them to make his horn shiny again.

I saw this activity at Life with Moore Babies, and I thought it would be perfect to go with the rhino’s horn. (The boys probably would have liked it more if we had actual rhino horns to brush – ha!)

First, we soaked two eggs in Dr. Pepper for about an hour. 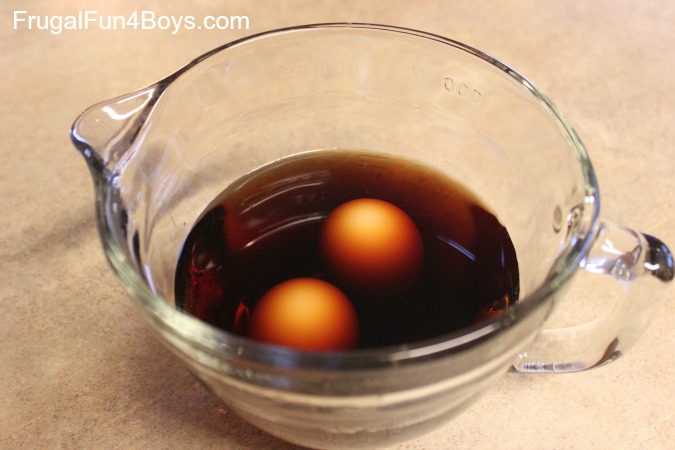 They were quite stained after an hour! And I explained to Aidan (our biggest soda fan) that this is why we limit his soda intake… 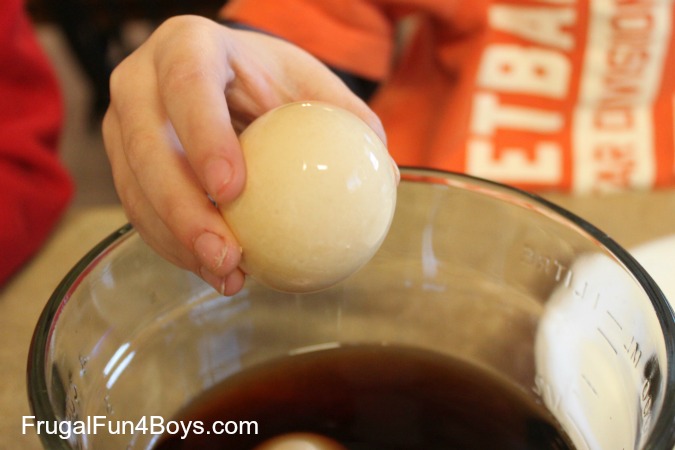 Then I gave Gresham and Owen each an egg and a toothbrush and asked them to see if they could get their eggs white again just like the rhino did in the story. At first, it didn’t seem like anything was coming off, but when I rinsed Gresham’s egg with water, it looked white where he had been brushing. We added some toothpaste to their brushes, and that did work better to clean the egg. 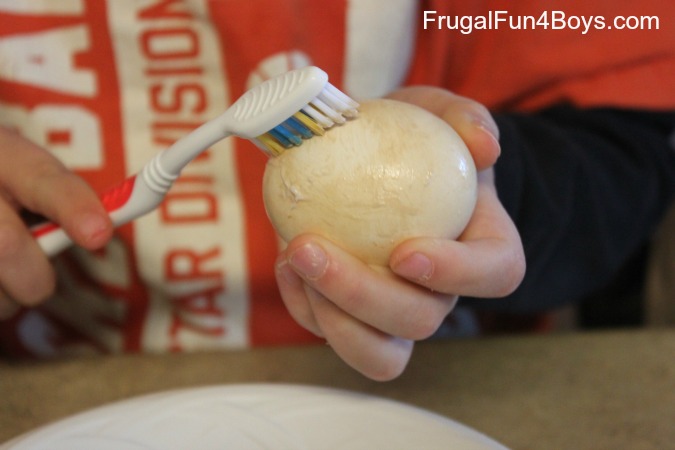 We used raw eggs, but I would definitely hard boil them first because Owen broke his!

It was still a fun activity, however, and hopefully the boys learned more about why we brush our teeth.

We did these math activities after we had finished reading the entire book. Gresham made a graph of all of the animals on Wild Island and how many there were of each type. 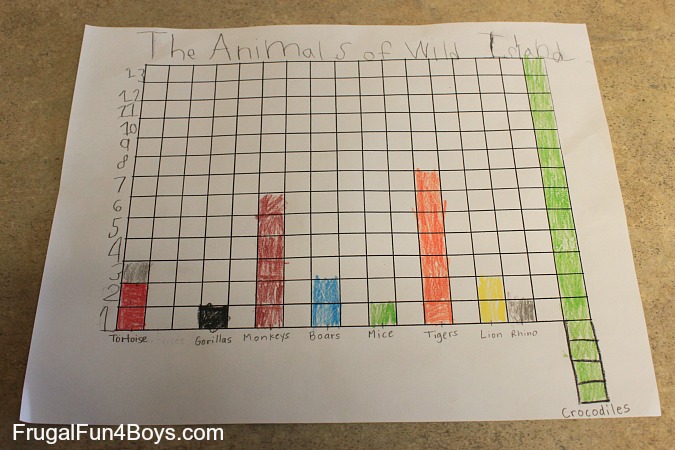 To make this graph, I enlarged some graph paper on our copier. Unfortunately, I didn’t think to check the number on every animal before I made it, so we had to add on squares for the 17 crocodiles!

I quickly made up an addition worksheet for Gresham using the data from his graph. It had problems on it such as “gorillas plus monkeys” and “boars plus tortoises plus lions.” 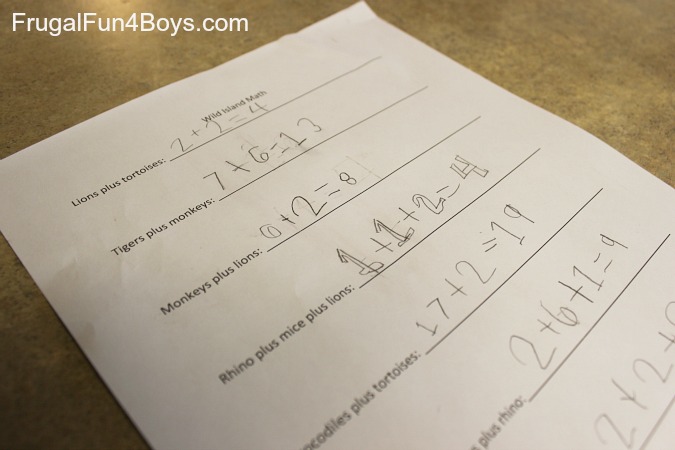 I love it when I find ways to tie math into other subjects!