Disclaimer Part 1: This post is not about frugalness or fun-ness, but I’m hoping that people will be helped by reading our story. And hopefully, someone who has a child who refuses to eat will feel like they are not alone.

Disclaimer Part 2: I am not a medical professional, and anything that I say about treatments for reflux is merely helpful tips based on what worked (or didn’t) for us. 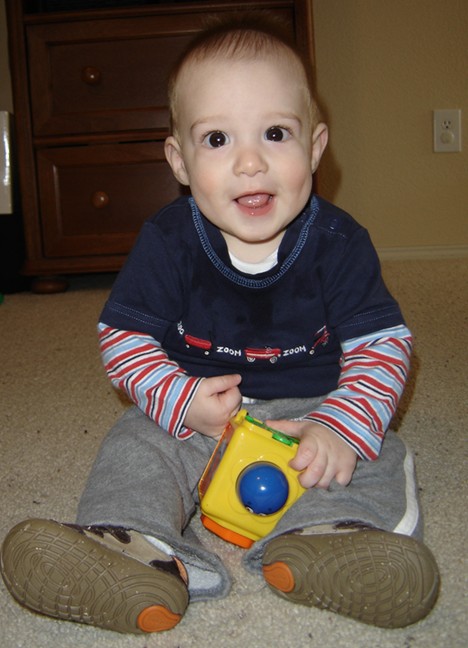 I have alluded to my youngest son Owen’s feeding difficulties, and I decided to write out our story about silent reflux in an infant. When he was going through the worst of it, I did lots of google searching. There are a lot of sites out there with medical information about reflux, but not a whole lot of practical support in living with it! Plus, people seemed to mostly post about their babies when they were doing terrible – I wanted to hear the end of the story! Did it ever get better? Did their kids start eating?

Owen does not fit the profile of most reflux babies, and so it took us a long time to figure out what was going on. Most babies with reflux are spitters and screamers. Owen never has spit up very much, and he’s always been a pretty happy guy.

When he was about 6 weeks old, I knew that something was not right. My older two boys had been bad nursers in the beginning, but by 6 weeks were good eaters with big appetites. Owen never got into a good nursing pattern. Sometimes he did well, but at other feedings he would begin nursing, and then pull away, arch his back, and cry. The only thing that would make him happy was to stop feeding him and put him down. After nursing two boys who were aggressive eaters, I knew that this didn’t seem right. We kept weighing him at the hospital’s scale, and he kept gaining weight at the rate he was supposed to. He didn’t hit any growth spurts like the other two did, but he kept gaining along…

When he was about 3 months old, I decided to start pumping full time so that I could try to get him to eat more at a time. It’s easier to get a baby to take a little more out of a bottle, and easier to feed in public. It was getting difficult because I would tell the boys that we would go somewhere “as soon as Owen finishes eating,” but then Owen would never finish eating. He would not even empty one side before stopping, so I would wait a few minutes and try feeding him again. Not conducive to life with two older boys! So I started pumping all the time. I figured that he had become accustomed to being a snacker. Maybe we could stretch his tummy a little and that would help! With the bottle, I could tell what Owen was doing – he would begin eating, and after 1-2 oz. the arching and fussing would start. Time to call the doctor.

We had been putting off going to the doctor because Jordan was out of work and we didn’t have any health insurance. Jordan started a new job on August 24th. On August 26th I took Owen to the doctor because we just needed to figure out what was going on, so we decided to take him even though Jordan hadn’t enrolled in the benefits yet. We would just pay whatever it took. Little did we know that something like this can be termed a pre-existing condition, causing the insurance company to be able to refuse to pay!

The Lord was so very gracious to us because when Jordan enrolled in health insurance, it covered us retroactively back to August 24th. So Owen’s reflux was never a pre-existing condition, and the insurance company has paid for THOUSANDS of dollars in expenses over the last year!

Anyway, back to August 26th. Owen’s pediatrician said that he probably had silent reflux (the material being refluxed never comes all the way up, so it burns coming up and going back down.) We decided to try a low dose of Axid to see if it would help. The doctor said that we would see results in a few days if it was really reflux.

Well, Owen did well initially, and then went back to his bottle-refusing ways. We called the doctor, and they recommended switching to Prevacid. The Prevacid was very hard to give to a baby! It comes in little tablets that dissolve into a billion little granules. We tried putting the tablet in a bottle nipple and adding water, but he wouldn’t drink it down (he hates to drink!). It was just a big mess. The next day, he came down with a cold, so we stopped the Prevacid figuring that his poor eating was probably being caused by the cold coming on.

For a while, we were not on any reflux medicine (being unconvinced that he really had reflux, or that if he did, the medicine wasn’t helping), but then teething hit. All through the month of October, Owen would only eat 1-2 oz. at a time (and sometimes less – like half an ounce even after 2-3 hours between meals). Our doctor suggested that maybe we were feeding him too often. Other well-meaning friends commented on how healthy he looked (he has always looked very healthy), but I could tell that he was still uncomfortable. He didn’t like to be held while we fed him. We started feeding him his bottles in his bouncy seat. This didn’t seem normal. We did lots of google searching, and his symptoms kept bringing us back to silent reflux. So we put Owen back on Axid in November. He was still teething and still a fussy eater, but the medicine seemed to make things tolerable.

In December, we went off the medicine (because he was 7 months and his pediatrician suggested that we might not need it anymore), and December was horrible. Every day was a struggle to get him fed. We also started seeing more reflux symptoms – his voice was hoarse all the time, and his weight gain had really stalled. But December also brought us a more firm diagnosis and some health professionals who were very helpful!

This is not a reflux blog (or going to become one), but let me know if you have interest in the rest of our reflux story! I’ll post updates sooner if I know that people want them!