If you have been following me on facebook, you know that we have made a couple calls to poison control in the last week…

Owen hates to eat food for the most part.  However, he loves to eat paper, board books, toothpaste, etc., etc.  It’s getting pretty frustrating, actually!  If I buy a new box of diapers, I will inevitably find a bite out of the box within a day or two.  And yet he does things like today’s huge tantrum at lunch because his pureed pears had a little rice cereal mixed in?  We don’t get it…

So, call #1 was on Monday because Owen was licking diaper cream out of the tube.  He found a box of infant stuff in his dresser, and decided to try some.  He tongue was white, so I wasn’t sure if he had swallowed any.  So I called poison control.  They were very helpful and said that the worst that would happen was a little loose stools, depending on how much he swallowed.

I posted on my facebook page about calling poison control, and several people commented with items that they also knew were not harmful.  Good to know!  Things like vaseline, bubbles, toothpaste, and silica packets. (In small amounts, I’m sure… I’m not suggesting that you let your kids eat these things!)

On Wednesday, Gresham pumped hand soap all over the counter while washing his hands, and then left the bathroom door open (which is strictly forbidden because of Owen putting his hands in the toilet and things like this happening)! Owen headed right to the bathroom and got into the soap.  When I found him, he had the dispenser in his hands and was swallowing with little gulping noises.  I wasn’t sure how much soap he swallowed, so we called poison control again… Happy news – soap is not harmful either, unless it’s hand sanitizer.  That is bad because of the alcohol content.  But plain ‘ol hand soap might just upset his tummy a little.

The poison control lady suggested that maybe I should baby-proof my house because babies are just gonna put things in their mouth.  Gee, I hadn’t thought of that!  We do have the medicines and cleaning products out of reach, but Owen is kind of beyond baby proofing.  It’s kinda like people who get really good at something because they practice it all the time.  Like, professional athletes started out playing ball all the time as kids.  Owen doesn’t play blocks or read books or drive cars – he spends all his time trying to get into things.  He’s gotten very good at it!

Wednesday afternoon I taught a private cello lesson.  Partway through the lesson, I could sense that Owen was into something… I found him in the bathroom playing in the toilet with the plunger.  (Gresham… You left the door open again!!!)

Then Wednesday night, we left to go get family pictures taken.  I got out some new shoes for Aidan to wear.  Owen found the box in my closet, and came out with a silica packet in his mouth (still sealed – whew!) but thanks to the power of social media, I already knew I didn’t need to worry about that one! 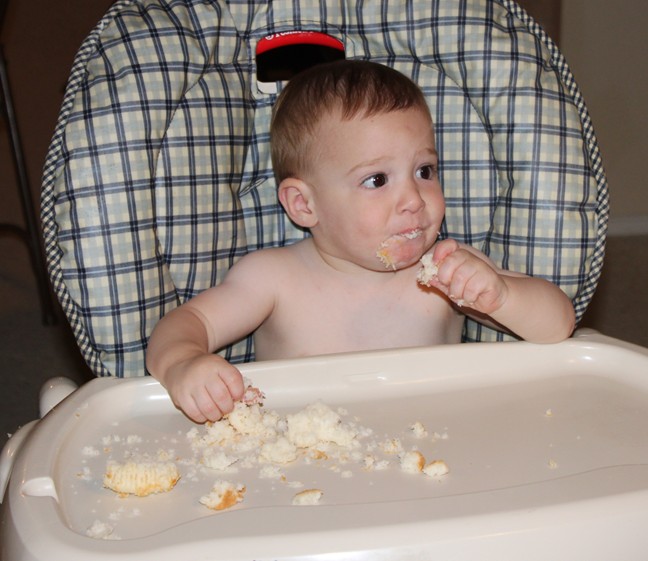 Owen squishing his cake on his first birthday – he didn’t eat any!