Now that my oldest son is approaching age 9 (this week, in fact!), I am starting to realize, slowly, that before I know it, I will no longer have four little boys at my house, but four men. 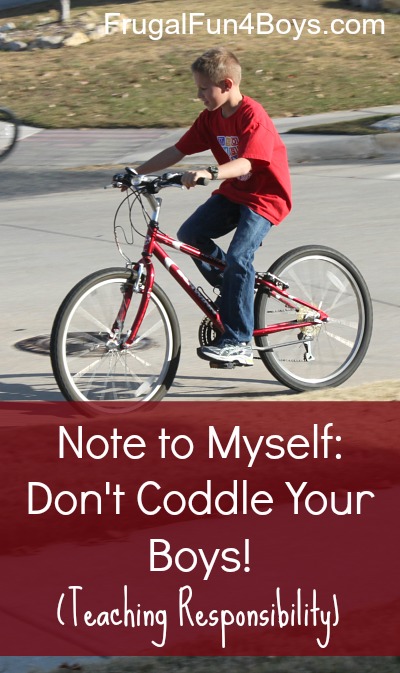 What kind of men do we want them to be? Not the type that we saw at the park the other week! We couldn’t help but overhear a conversation between an engaged couple. She was telling him about a meeting they had scheduled with a photographer, and he was whining about how he didn’t want to go, and why couldn’t she just make the decision. Sort of sounded like a 5-year-old. I don’t want my boys to be whiny men. Or men that only want to do what’s fun and spend money on what’s fun. Or men that only want to work hard enough to get by.

I want my boys to grow up to be men, not boys in man-sized bodies!

My husband and I desire first and foremost that our boys know the Lord and walk in His ways. Lord willing, they will take on the role as spiritual leaders of their homes. They will most likely be the primary wage earner for their families. We want them to be willing to take on difficult tasks. To face a problem head-on until they come to a solution. To be willing to take risks and put aside their own comfort to come to the aid of others.

Life has been difficult for my husband lately. His work is very stressful, and the pace of life at our house doesn’t allow for a lot of evening relaxation! In addition to his stressful job, my husband also mows 6 lawns to earn extra money for things like homeschool books and clothes for the boys. It seems like there is always something to pay for! His allergies flare up when he mows (in the 100 degree Texas heat), but I rarely hear him complain.

I want my boys to be men like their dad.

Last week, I talked to a friend of mine who is a mom to ten children and asked her several questions about raising responsible and hard working boys. She has 3 boys who are age 16 and up, and they are all responsible guys who hold down jobs while still completing chores at home. She said two things that I thought were important:

Growing up is a process.

Children don’t change into adults just because they turn 16 or 18 or 21! It’s a process of taking on more responsibility. It starts when they are young. Her elementary aged children learn to make beds, do laundry, and fix meals. They have required chores, but can also do additional chores for pay.

Once her children are working outside the home (age 16), they spend only 10% of their income on “wants.” The rest is saved so that they can pay for college books, their cell phone bill, their portion of the car insurance, gas for their car, and meals out with friends. They purchase their own computers, etc.

I thought that the key thing here is that her teens are learning to manage money and bills while still living rent-free at home. It’s a time to transition into more responsibility, while still living in the safety of home. This is a different concept than the typical American teenager who sleeps late, hits up mom and dad for money to go out with friends, and has few responsibilities other than school work.

I asked her what she thought was the biggest mistake that a mom with boys the age of mine could make. Her answer?

The biggest mistake is not being consistent with your expectations for your children. This includes not only chores, but also consistency with discipline.

If my boys view me as a force they can manipulate rather than a consistent and reasonable authority put in place by God, they certainly won’t be very respectful. And a lack of respect becomes a major problem when children become big kids and then teens!

This was rather convicting. We used to be pretty good about our chore charts, but I have not enforced them consistently. Some days we have checklists, and others we don’t. No wonder it has been difficult to get my kids to pick up after themselves!

For me, one temptation is that it is easier to do a job myself than to have the boys do it. This is not a reason to let them slide!

It’s also tempting to intervene rather than letting natural consequences do their job.

God will not be mocked – we will reap what we sow (Galatians 5:7). If my children chose to make a big mess, then they are choosing to have a lengthy clean-up time. It’s part of life! If my children choose not to complete their summer reading log from the library, then they will not have a free Chick-fil-a coupon to use when the others use theirs. A natural consequence is going without the treat, not a kid’s meal purchased by mom.

Sometimes, it’s easier to bail kids out than to listen to their complaining. Again, this does not teach good character. It’s actually modeling laziness!

So the bottom line is that growing up is a process, and God expects me to be a consistent authority in my children’s life, shepherding them along in that process.

How are you helping your boys grow into responsible young men? What are the challenges for you?