I must confess, I have a love/hate relationship with sand boxes.

My boys LOVE to dig. It’s one of the main things that they want to do outside, and they can entertain themselves for hours digging. At our old house, we had a really huge awesome sand box. Unfortunately, the boys fought over it constantly. I’m not sure why – they had plenty of space! It almost seemed like the space was so big that they had huge plans of things to make and never wanted anyone to interrupt their plans. Maybe that was it? I don’t know. Anyway, when we moved, we did not immediately put in a new sand box. Our new house came with a swing set in the yard, and it didn’t take long for the boys to turn the area under the fort (which was covered in mulch) into a digging spot. The only problem with that is that our soil has a very high clay content. It’s hard to dig in, and the dirt sticks to their feet and shoes so that we have a fairly major mess EVERY time they go outside.

When the weather (finally!) started getting warmer, I wanted to create some type of sand play area. I thought about purchasing a sand table or a sand box, but it can be hard to keep cats out of a sandbox, and we have all kinds of critters that roam through our backyard. We could get one with a cover, but then I would have to be the one to make sure that it actually got covered.

After some thought, I decided to bypass the $40 sandbox and go with an under-the-bed box that we already had! I added a $3 bag of sand, and we were set! 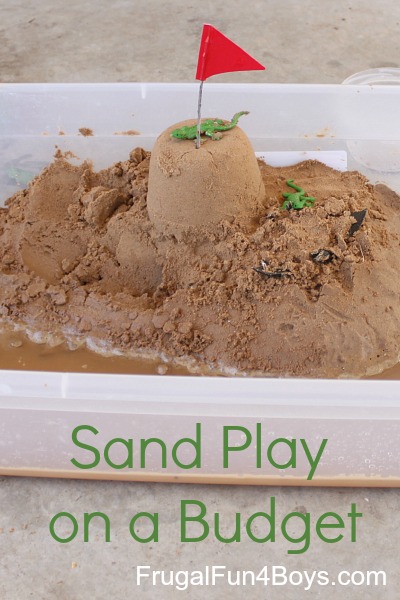 The first time we played with it, I let Gresham and Owen have a pitcher for adding water. (This was not the greatest play sand ever, and it turned the water a murky brown!) 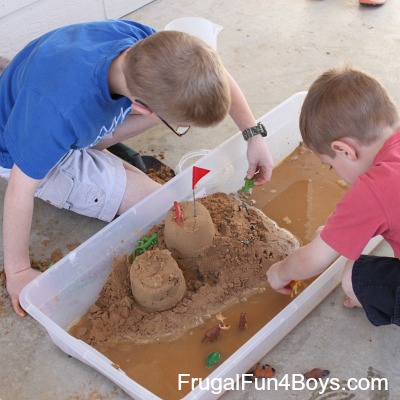 This ended up being a little more messy than what I want to deal with on a daily basis, so we poured off the excess water when they were done playing and let the sand dry out.

Now they have a spray bottle full of water outside. They can spray down the sand to make it wet enough to stick – and the spraying is actually part of the entertainment out there as well! 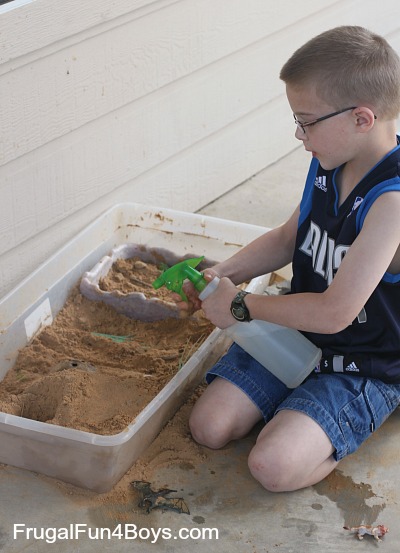 It’s not a huge mess because they aren’t sitting in the sand. And it was SO cheap! We still have sand left in our bag. Every couple of days, I go out there and sweep the spilled sand off the porch and put it back in the tub. When the sand gets too low or a neighbor cat finds it, we can buy another bag. At $3/bag, it’s not a big deal!

One afternoon, I was out with Aidan going to a couple of appointments while the other boys stayed with Dad. Dad reported that Gresham spent almost 2 hours with the sand, the spray bottle, and his toy animals. This has definitely been a success! It still doesn’t satisfy their longing for large-scale digging, but we can go to the city park for that. They have a nice big sand box there.

How do you feel about sand boxes? Love them or hate them?