We have been on a major Rainbow Loom kick around here, which has worked well for me since I’m 33 weeks pregnant and can help with Rainbow Loom from a chair or the couch!

Aidan (age 10) and I have been compiling our favorite loom band projects, and now we’re sharing them with you along with links to the tutorials we used for each project. Please feel free to leave a comment with a question about any of the projects if you run into trouble – we’ll try to answer as best we can!

We are calling this list “boy approved” – it’s not that girls won’t want to do these projects, but these are things that the boys have approved of since they’re not interested in the flowery looking Rainbow Loom stuff – ha! 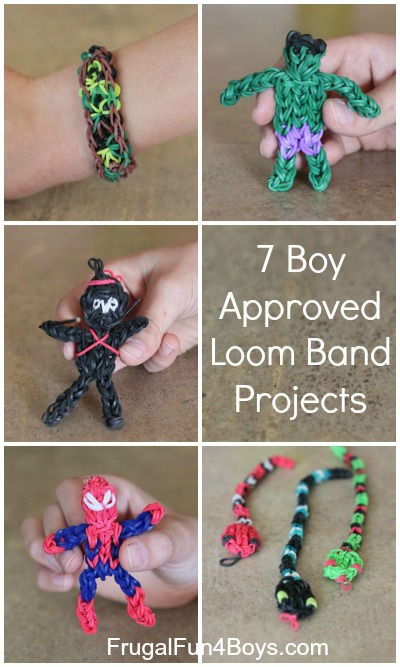 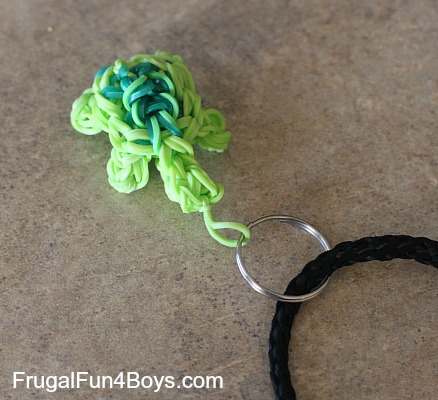 The turtle was the first charm we attempted, and it would definitely have turned out better if we had brown bands or at least another type of green for the head and feet. Aidan didn’t want to put eyes on it, so it doesn’t have any!

We used this turtle tutorial from PG’s Loomacy. The tutorial moves nice and slow, which was helpful for us! The video gives a couple of options for eyes for the turtle.

Difficulty level: Challenging (Well, it was for us anyway! But we got it!) 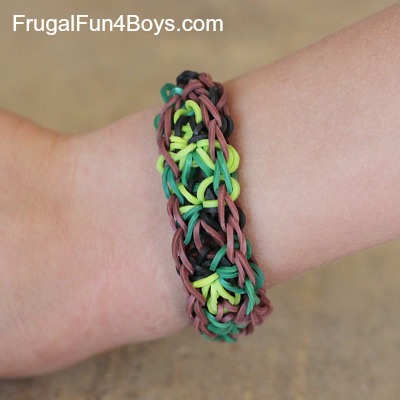 After we had been to the store for more bands, Aidan made the Starburst bracelet with camo colors. He used brown for the border color. I like how he made each starburst a combination of colors. This bracelet looks really good on.

Difficulty level: Intermediate. Might be a little challenging for a beginner, but we caught on quickly! 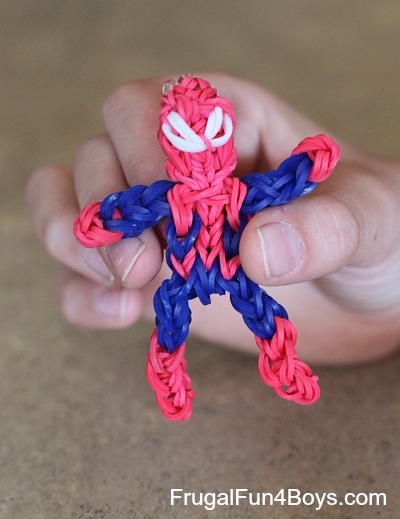 After making the turtle, we saw PG’s Loomacy Spiderman and knew we had to try this one! By using c-clips, Aidan made him web pieces that can be taken off and on. So cool! 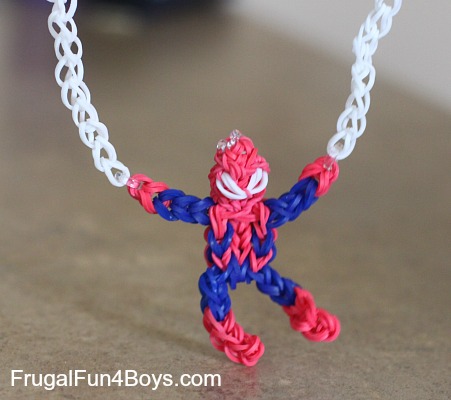 Note: All action figures use double bands (put on two layers at a time) to make them thicker and stronger.

Difficulty level: Challenging. All of the action figures take some practice! Aidan said that the video for the ninja (below) shows a different way of making the neck which is MUCH easier and does not involve digging through tons of layers to loop the bands. So you might want to start with the ninja. Another difference between the tutorials is that PG’s Loomacy shows how to make the arms ahead of time and then add them on before looping the bands. The ninja tutorial shows how to use two looms to make the arms along with the rest of the body.

I feel like the challenge involved has been a good challenge – Aidan is sticking with these projects and is so proud of the completed guys! And his little brothers are VERY happy with the guys he has made for them! 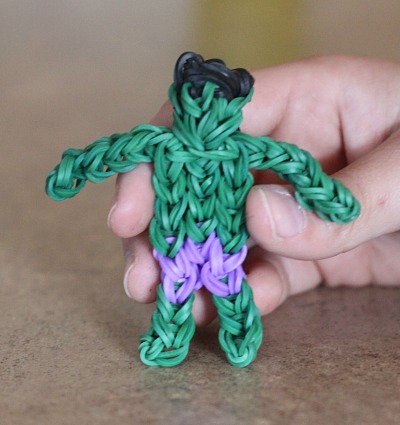 Once you get the hang of the action figure design, it’s not hard to make other heroes! Aidan made this Hulk design himself. Here is how he set up the loom: 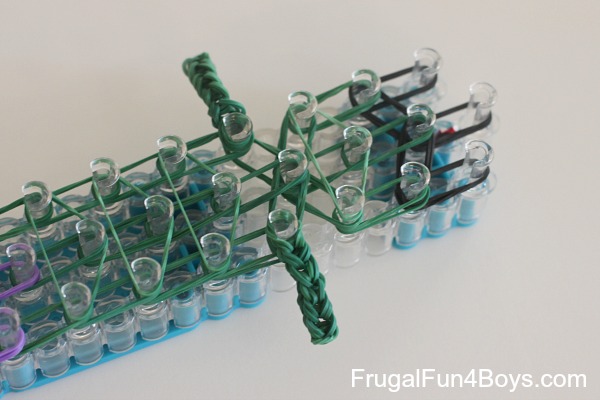 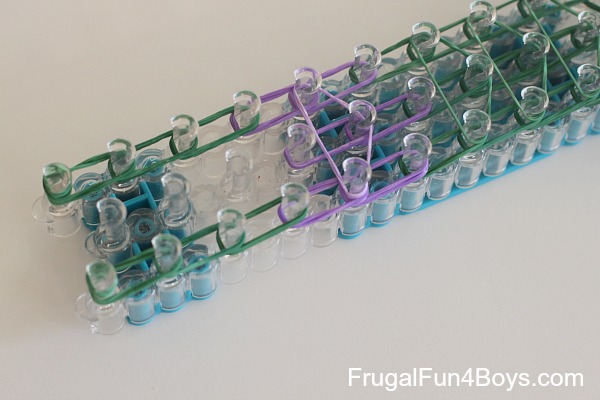 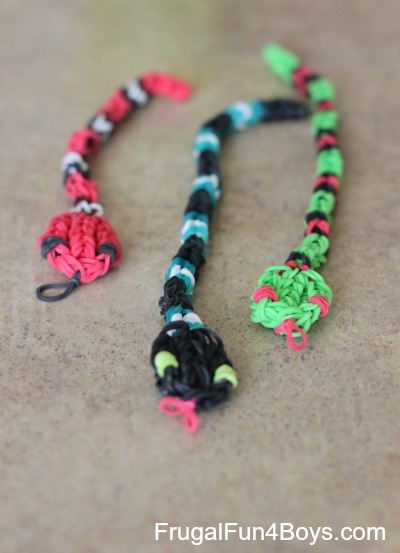 These snakes are so much fun! Check out my separate post on how to make them here –> Rainbow Loom Snakes

Difficulty Level: Intermediate. Not as hard as the action figures. 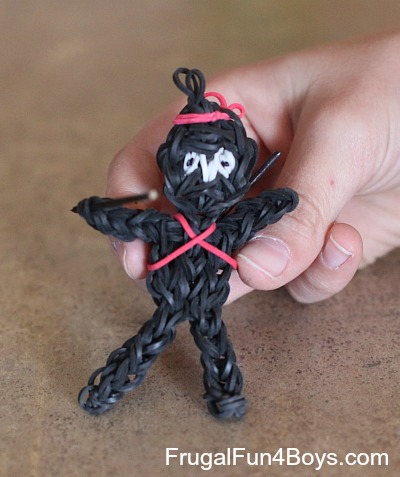 Okay, this ninja project might be my favorite! His little swords are toothpicks colored with black Sharpie. In the video, the eyes are made with beads. We thought those looked a little weird, so we made eyes by wrapping two white bands four times each around two black bands (same technique as the eyes in the snake video if you want to see it in action). We stretched the black bands onto the loom at the step in the video where she puts on the beads. It will hopefully make sense when you see it… Then, we used a black Sharpie to draw pupils on the eyes.

Here is the tutorial –> Ninja tutorial from Kate 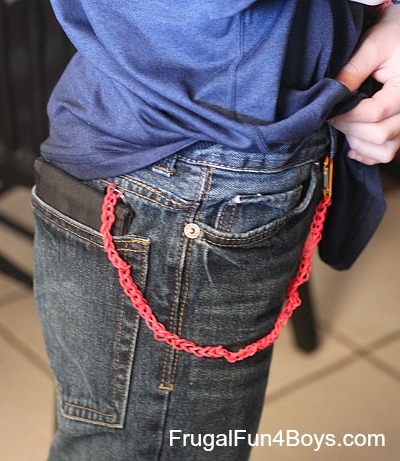 Depending on how you feel about the look of a wallet chain, the upside to this project is that it’s really easy! Aidan made this wallet chain using the basic bracelet technique. Instead of using a c-clip, he attached one end to the keychain ring on his wallet and the other end to a carabiner. He made the whole chain in one piece by turning around one row of pegs in his loom so that they faced the opposite way. Then he just looped around the corner and kept going!

What are your kids’ favorite Rainbow Loom projects? Also, I’d love to know where you find the best deals on bands!