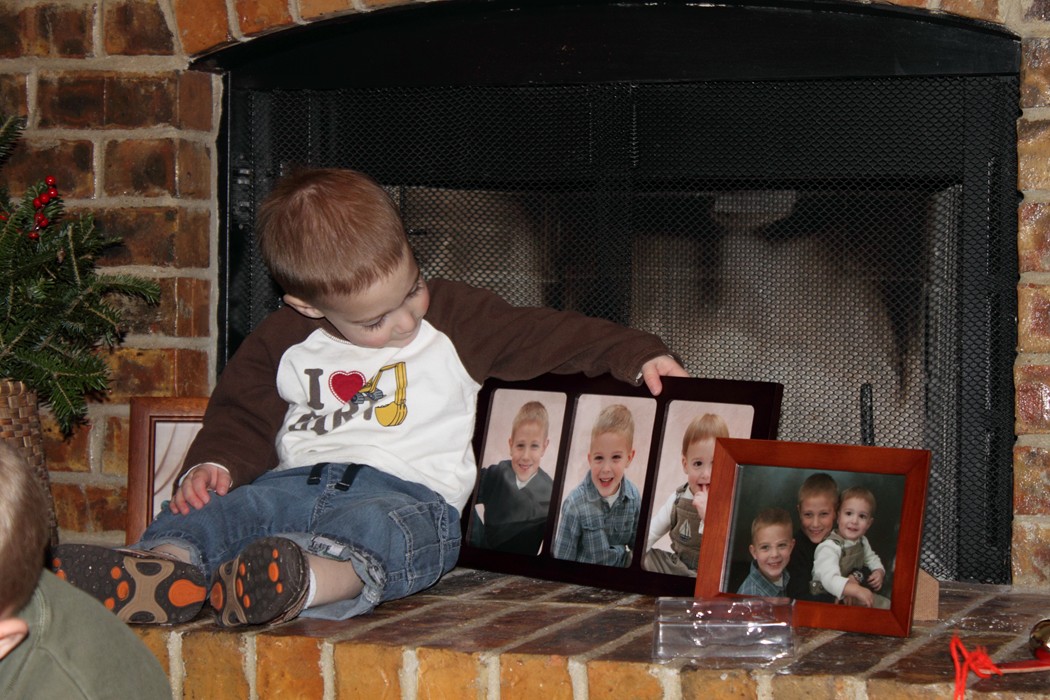 This picture was my favorite of all the pictures I took this Christmas. We were in the middle of opening gifts at my parents’ house when Owen decided to find a nice little spot to sit on the fireplace. He discovered these pictures of himself and his brothers and sat there and smiled and pointed to the photos of Aidan and Gresham. Cute.

A lot cuter than the scene that plays out on a daily basis at our house!

I think that sibling conflict wears a mother down like nothing else. There’s just something about not being able to start a load of laundry or even go to the bathroom without another fight erupting. Or my personal favorite… buckling everyone into the van, running inside for the diaper bag, and hearing someone yelling to me before I can even get back to the van! “Mo-om! Gresham won’t leave the arm of the seat up and I want it UP!” I just want to scream, “WHAT DOES IT MATTER????” But that tactic never gets me very far…

A couple weeks ago, we had a horrible morning with sibling fighting. The two older boys fought constantly all morning. I was out of ideas. In desperation, I sat them both down at the kitchen table, and we started reading James chapter 4. I knew it was about conflict and wasn’t sure it would even relate to them, but something had to be done! We started with verses 1-4 and learned that conflict comes from desiring things that we aren’t getting. James is addressing mainly unbelievers here, and teaching that unfulfilled desires cause conflict within individuals and between individuals.

Writing things down has worked for us before, so we started to make a list of all the things the boys wanted that they weren’t getting.

Aidan’s List of Desires: (He came up with some of these, and agreed that all of them were true)

Then we listed how Aidan responds when he doesn’t get what he wants: (he thought of threats, which I didn’t even realize he was doing…)

Gresham’s list was similar, except that his sinful responses are different: refusing to talk, more physical violence, and whining.

In James 4:4, is says “Do you not know that friendship with the world is hostility toward God?” I thought it was interesting that James was linking conflict with worldliness. We started realizing that the boys’ desires which lead to conflict are very worldly – desiring possessions, desiring to control other people, etc.

The solution is in James 4:6-7 – Humbling ourselves, submitting to God, and He will give us His grace. In other words, the boys need new desires. They need to replace the sinful desires with desires that honor God.

For example, desiring that no one ever touch their toy set-up needs to be replaced with a desire to love their brothers (1 Cor. 13) and to obey God by doing what they can to be “at peace with all men” (Romans 12:18). The desire to avenge every little sin needs to be replaced with a willingness to overlook an offense, knowing that they too are often in need of forgiveness.