One of our favorite family Christmas traditions happens on Christmas Eve when the boys (and now Janie too!) give gifts to each other that they purchase with their own money. We started this tradition when Aidan was 4 and Gresham was 18 months, and it worked so well that we have been doing it ever since! 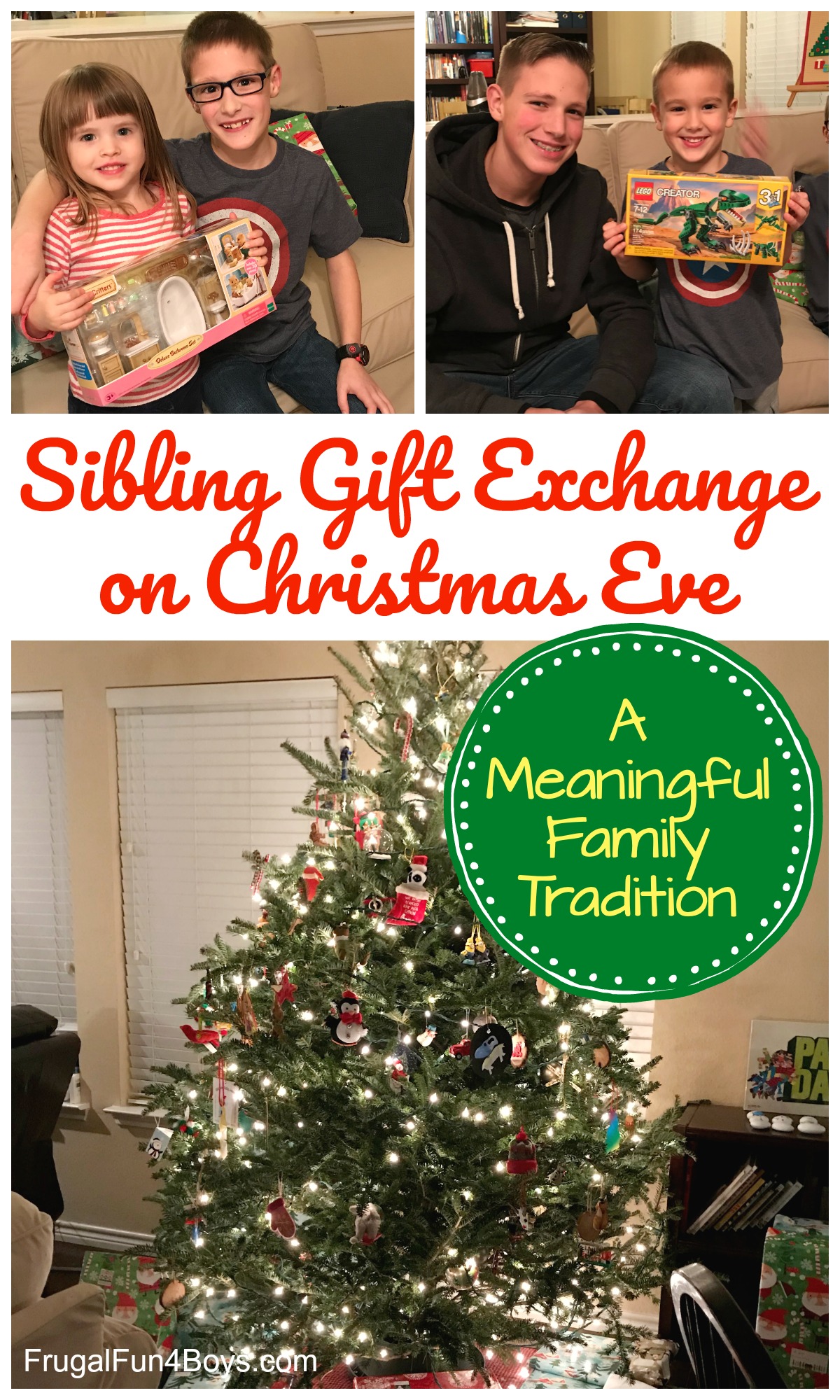 With five kids and lots of daily sibling fighting, I think it’s important to build in some family traditions that remind the kids just how much they really do love each other. Every step in this tradition is so good for building family memories and encouraging kids to enjoy giving as well as receiving. As our family has grown, we have talked about drawing names so that the boys can just give a gift to one sibling, but they don’t want to! They love the time of “brother gifts” on Christmas Eve, and they want to pick something out for each person.

Update for Christmas 2018: We did try drawing names last year! Shopping was faster and they were able to buy one $20 gift instead of multiple small gifts, but we decided to go back to buying small things for each person this year. It’s just more fun!

Sometime in November (when it dawns on me that it’s time to save for Christmas gifts), spending comes to a stop and no one is allowed to purchase any toys for themselves. Any money earned through allowances and extra paid chores goes to each child’s Christmas fund, which will be used for purchasing gifts. Just this past weekend I went to the bank and stocked up on $1 bills for this purpose. It’s much more meaningful to the kids if you can pay in actual cash as soon as a chore is completed. When they were younger, I saved the money for them in envelopes. Now the older two (12 and 9) keep track of their own funds in their wallets. Make it fun! During this time, I come up with extra chores to do that they might even enjoy, and then they get to add cash to their Christmas fund. (For kids under age 5, I usually supplement their earnings when it’s time to go shopping. The baby receives one gift from everyone and doesn’t give gifts until age 3 or so.)

The thing that makes this such a fun tradition is that the boys know each other better than anyone, and they are usually very good at selecting gifts. Plus, it’s fun to go shopping with them one at a time! They usually spend $5 or so per person, sometimes less and sometimes a little more depending on which child is doing the buying and who the gift is for. Three year olds will, of course, want to shop for themselves. But don’t give up! They mature a little each year. Last year, Gresham (age 8 at the time) had the idea to sew sock monkeys for each of his brothers. It took Grandma and I both helping, but he worked so hard! He enjoyed every step – making and stuffing the monkeys, then making superhero capes and masks for them to wear, then wrapping them. It was a very special Christmas Eve! But the gifts certainly don’t need to be that complicated. Another year, Aidan was tired of his little brothers borrowing his cowboy pistols all the time. He bought an $8 set with 2 pistols in it at Walmart and split it up, giving each brother a gun. They were delighted!

Why Christmas Eve? The thing that I like about the kids exchanging gifts on Christmas Eve is that there is time to savor the giving. Our tradition is to go to the Christmas Eve service at church and then to come home for dinner and “brother gifts.” (They’re going to have to stop calling it that now that they have a sister too!) It’s not a mad dash as everyone scrambles to open things. Instead, each kids takes a turn getting his or her gifts from under the tree and giving them to their siblings. It has turned into quite a special time!

Do your kids give Christmas gifts to each other? How do you handle sibling gifts at your house?