Combine science and LEGO® building in this fun STEM engineering challenge for kids! Can you build a LEGO® pulley system that makes it easier (less work) to lift a load of pennies? 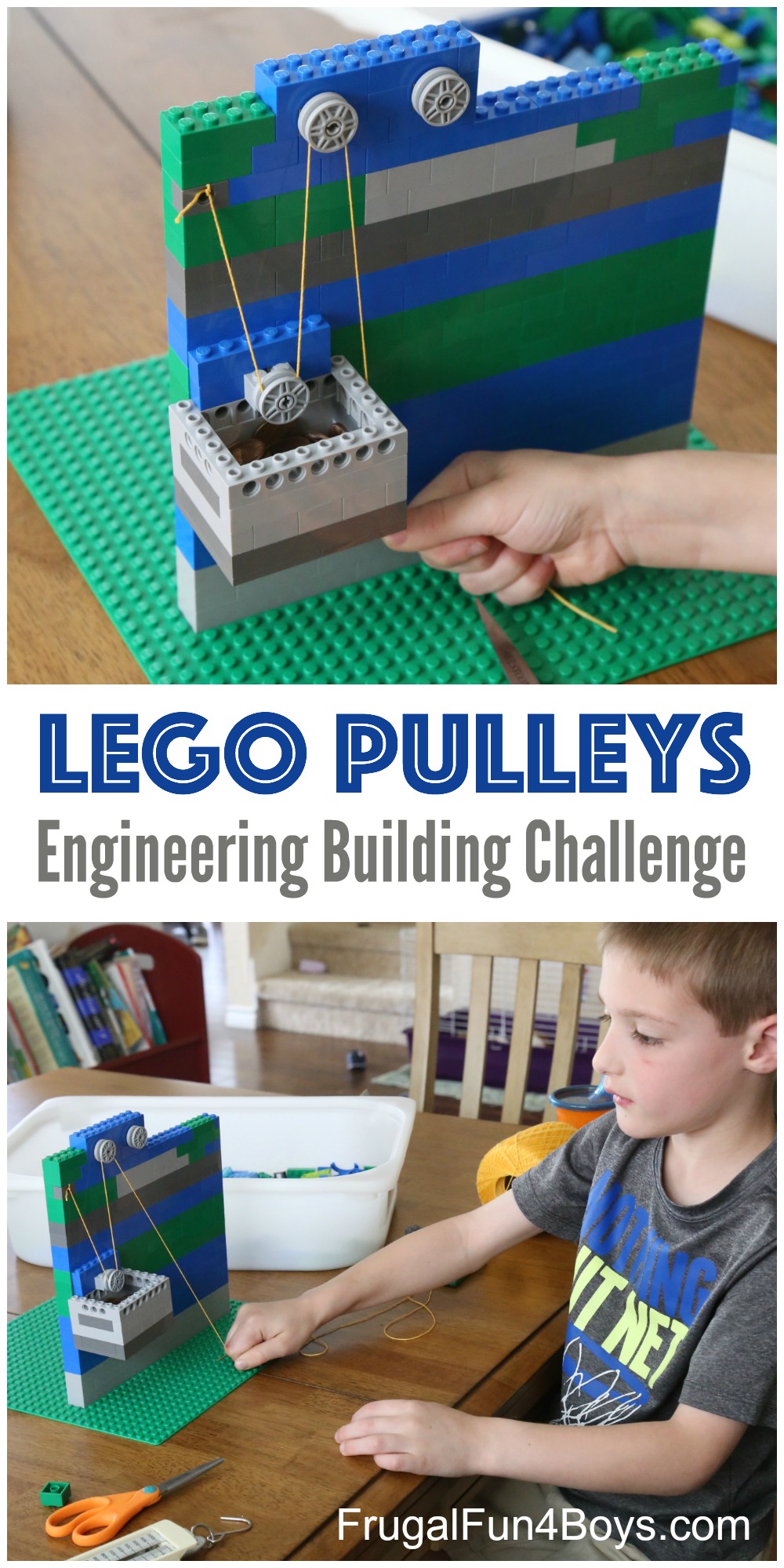 We lifted pennies in our LEGO® pulley system, but anything with some weight would work – marbles, rocks, etc.

Build a LEGO® basket to hold your load. We had this neat brick with holes in it that went all the way around the top of our basket, but any Technic bricks would work. You will want to have two holes in the top for attaching the string, and it’s best if the holes are centered. 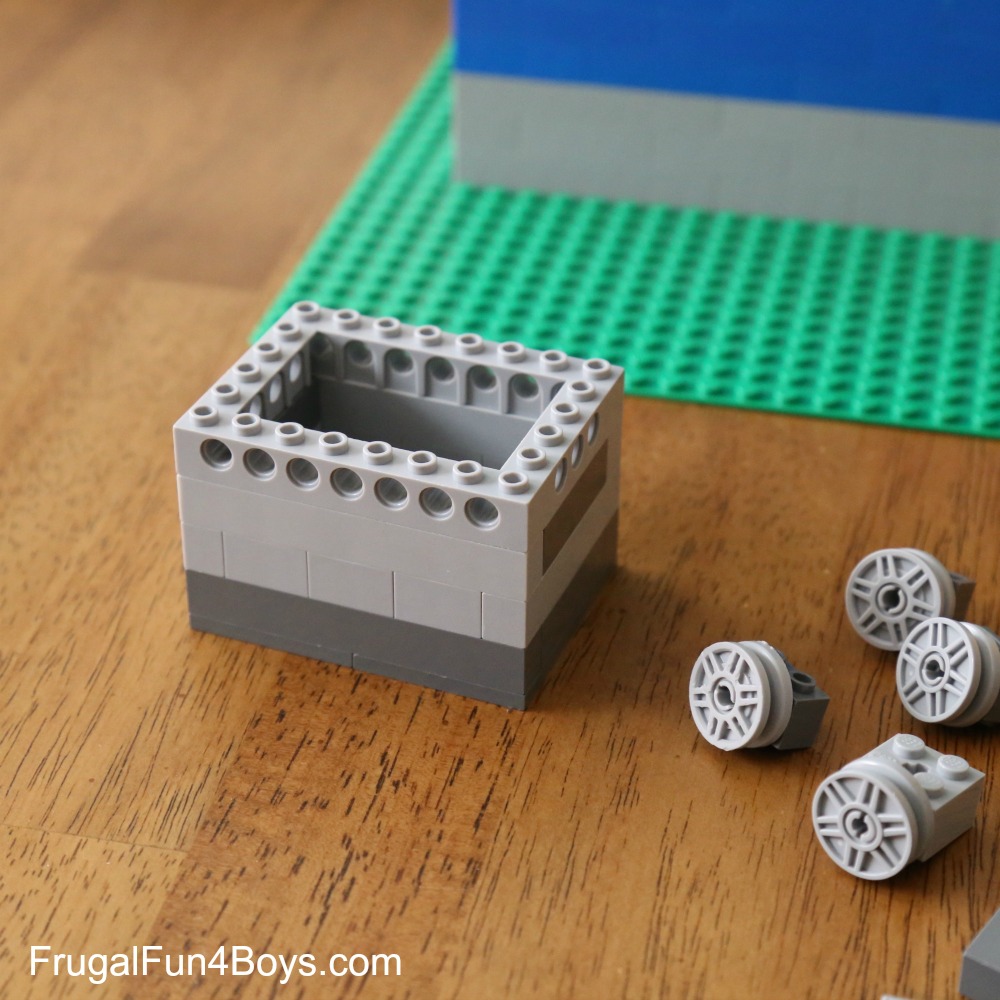 Then find some wheels (with the tires removed) to use as pulleys. You will need bricks with axles to attach them to. Some of ours are also attached to a connector pin and a 1 x 2 Technic brick (with a hole). 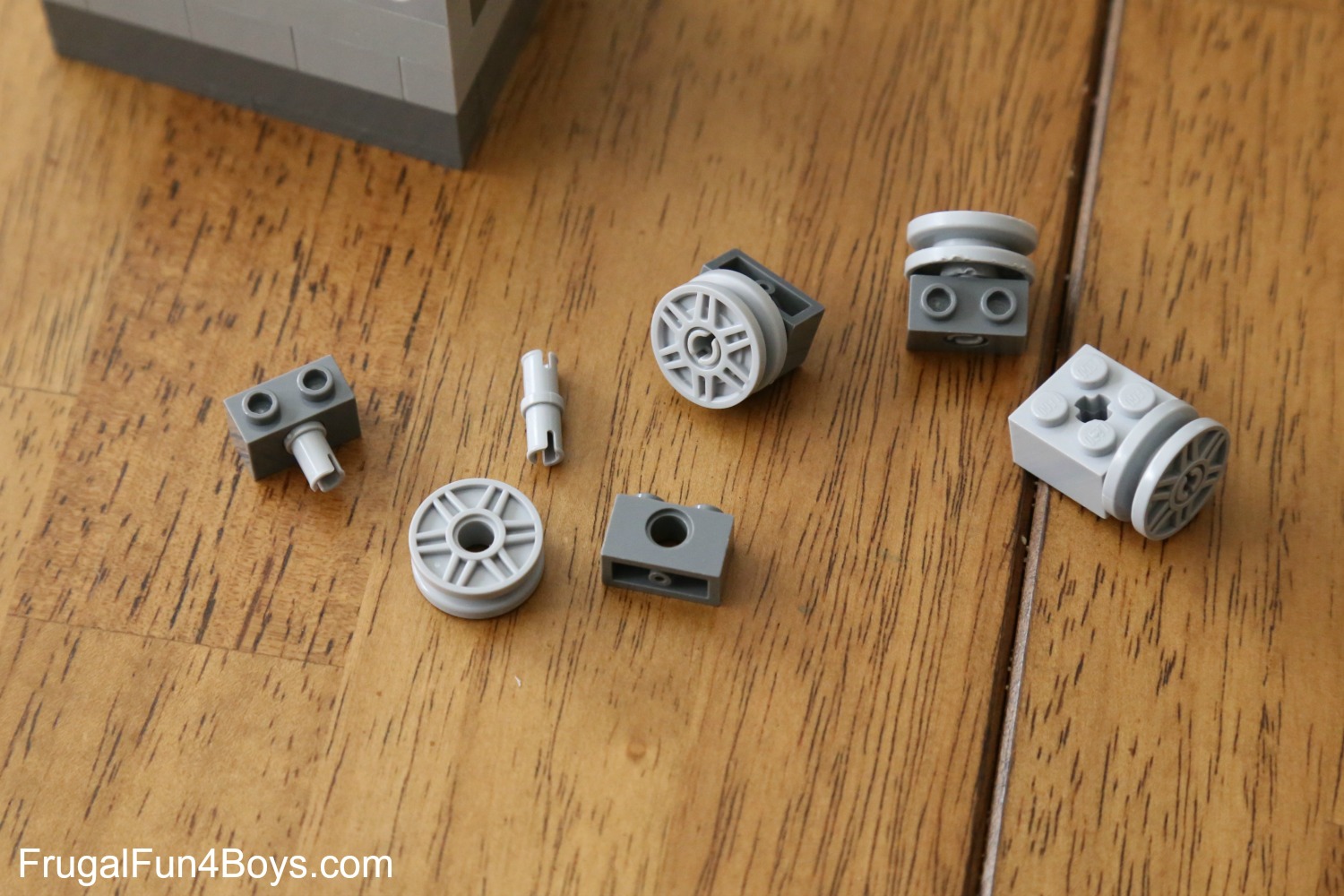 Attach the string as shown below, and fill up your basket with pennies. 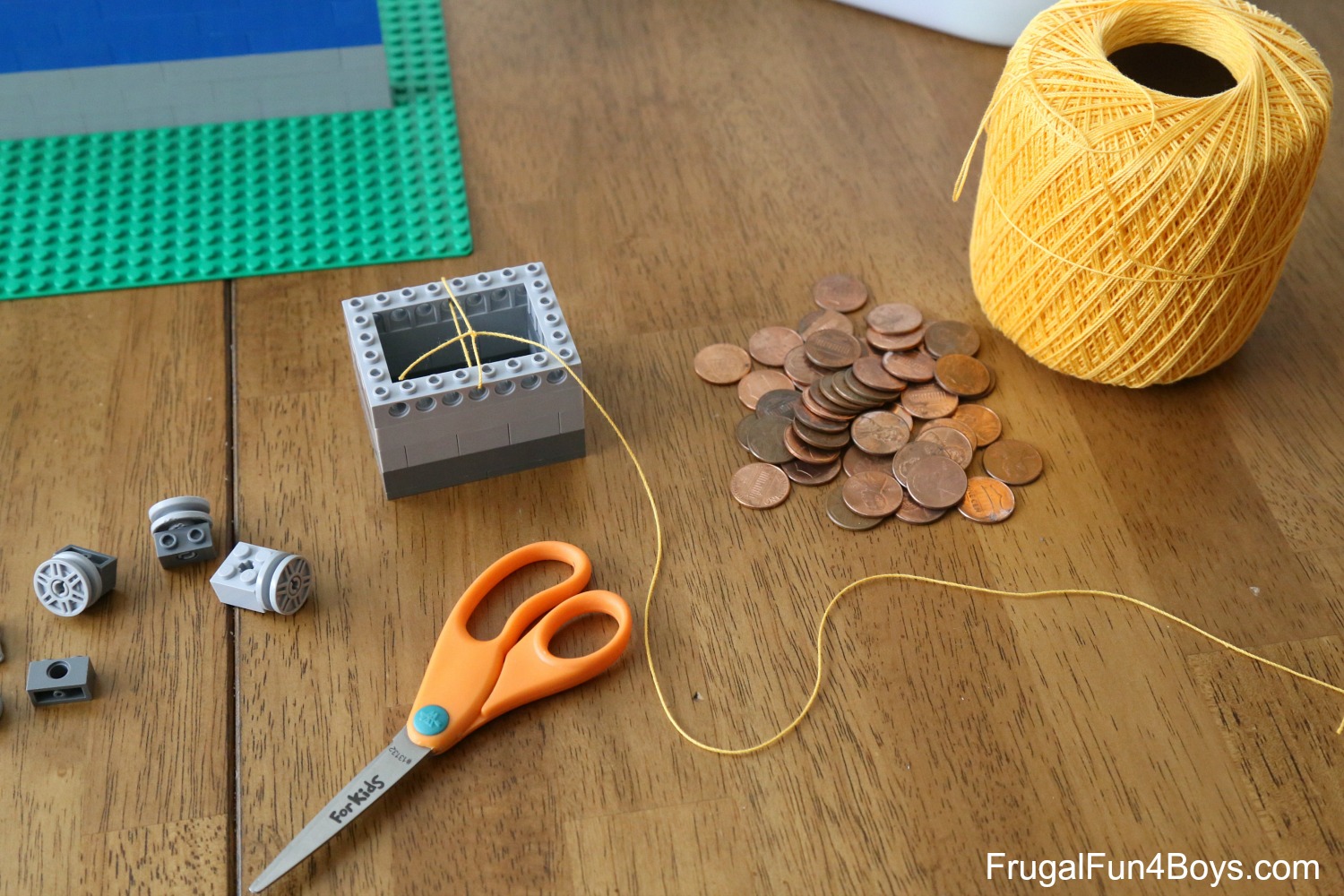 We didn’t read about pulleys before doing this project so that it would be purely experimental, and it was more fun that way!

First, Owen tried lifting the basket of pennies to see how heavy it felt. It was heavy! 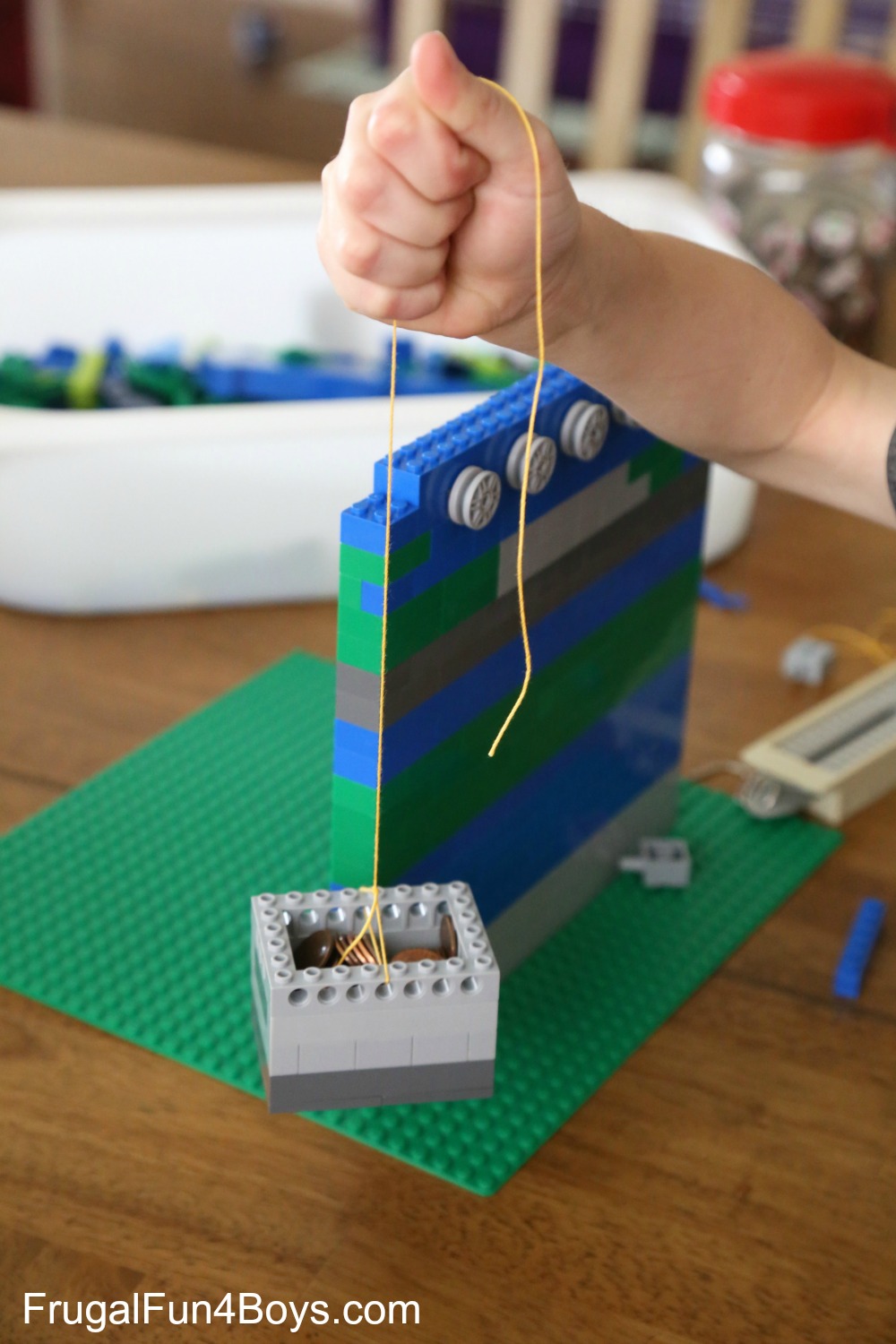 Then we tried lifting the basket using one wheel as a pulley. It definitely felt easier lifting it this way! 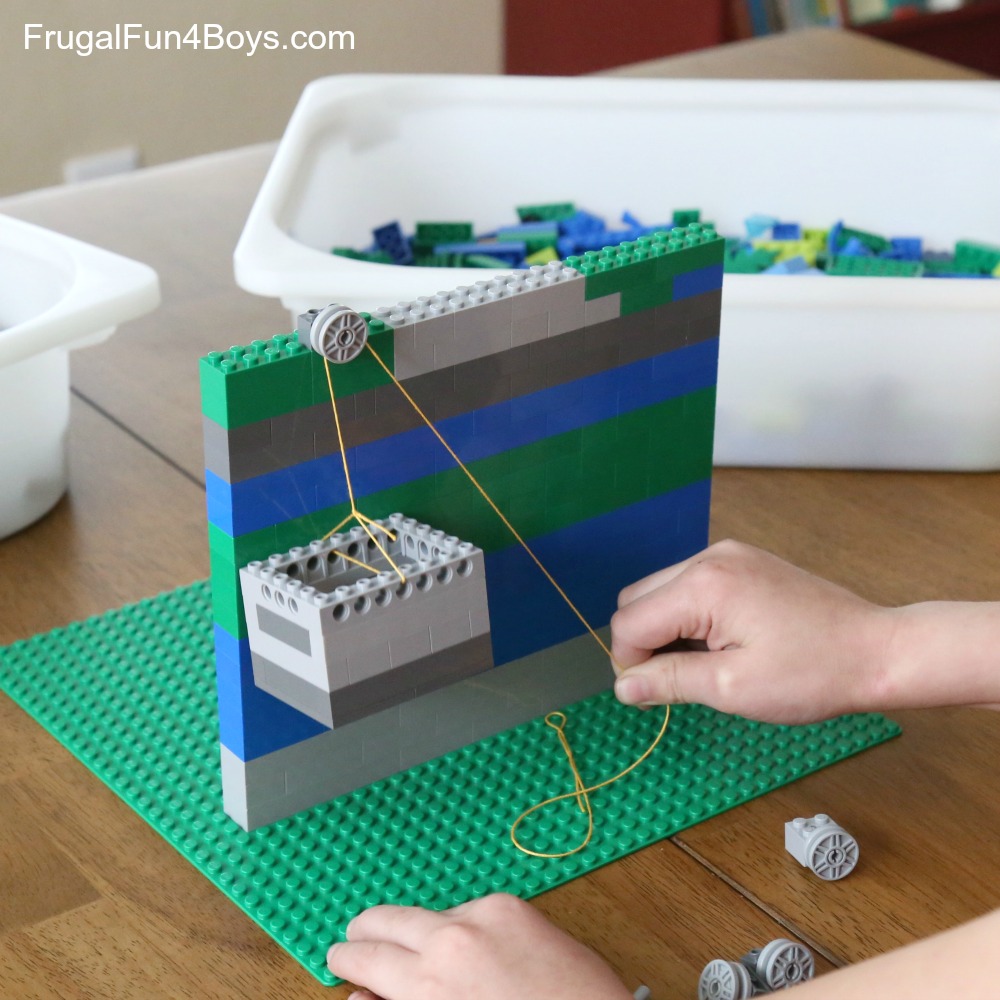 Then we tried to reduce the amount of effort needed to lift the pennies by adding more pulleys. 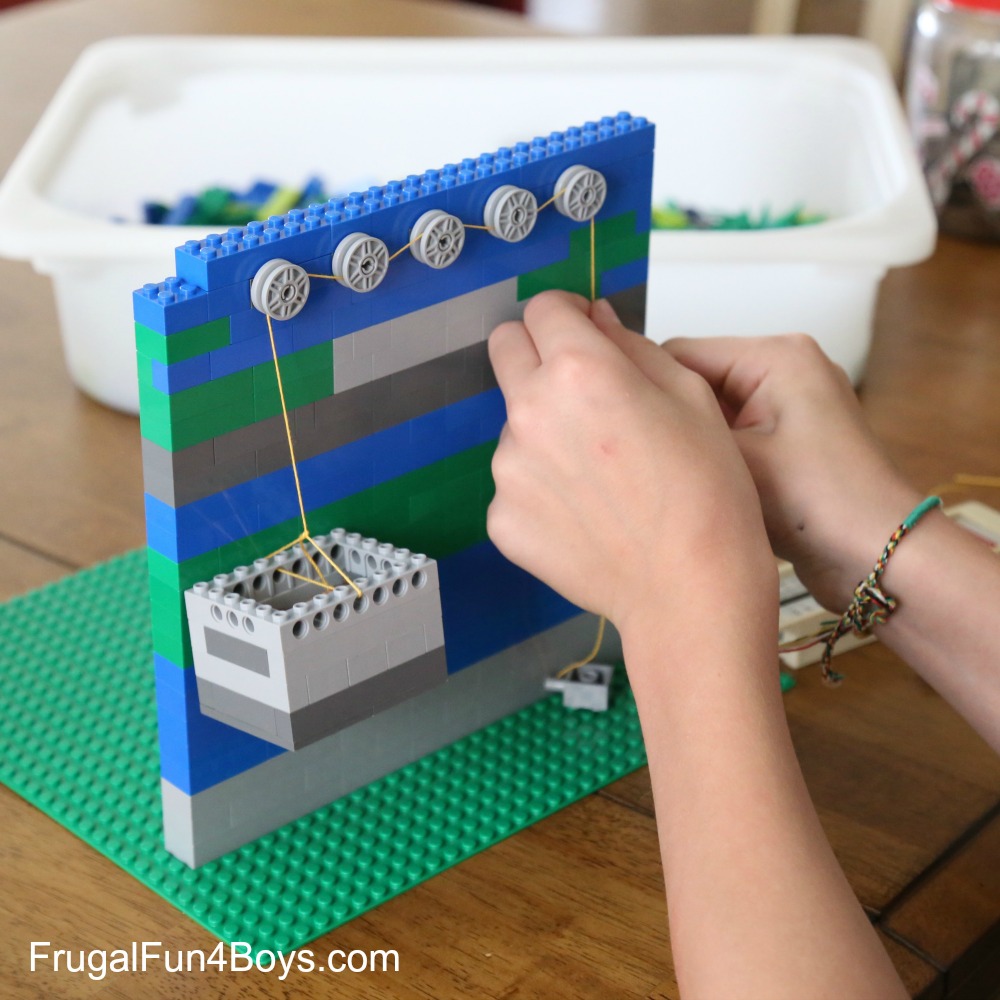 This was… not successful! Note that the set-up in the photo above does NOT work. It actually makes it more difficult to lift the load because we added more friction without adding any mechanical advantage.

At this point we consulted our science text book (Exploring Creation with Chemistry and Physics – love it!). We learned that our first pulley set-up did not actually reduce the amount of force needed to lift the load, but it did seem easier to lift because it’s easier to pull down than to lift up. In order to really create a mechanical advantage, we needed to attach a pulley to the load.

We put extra bricks around the wheel on the basket to hold it on when we lifted the load. 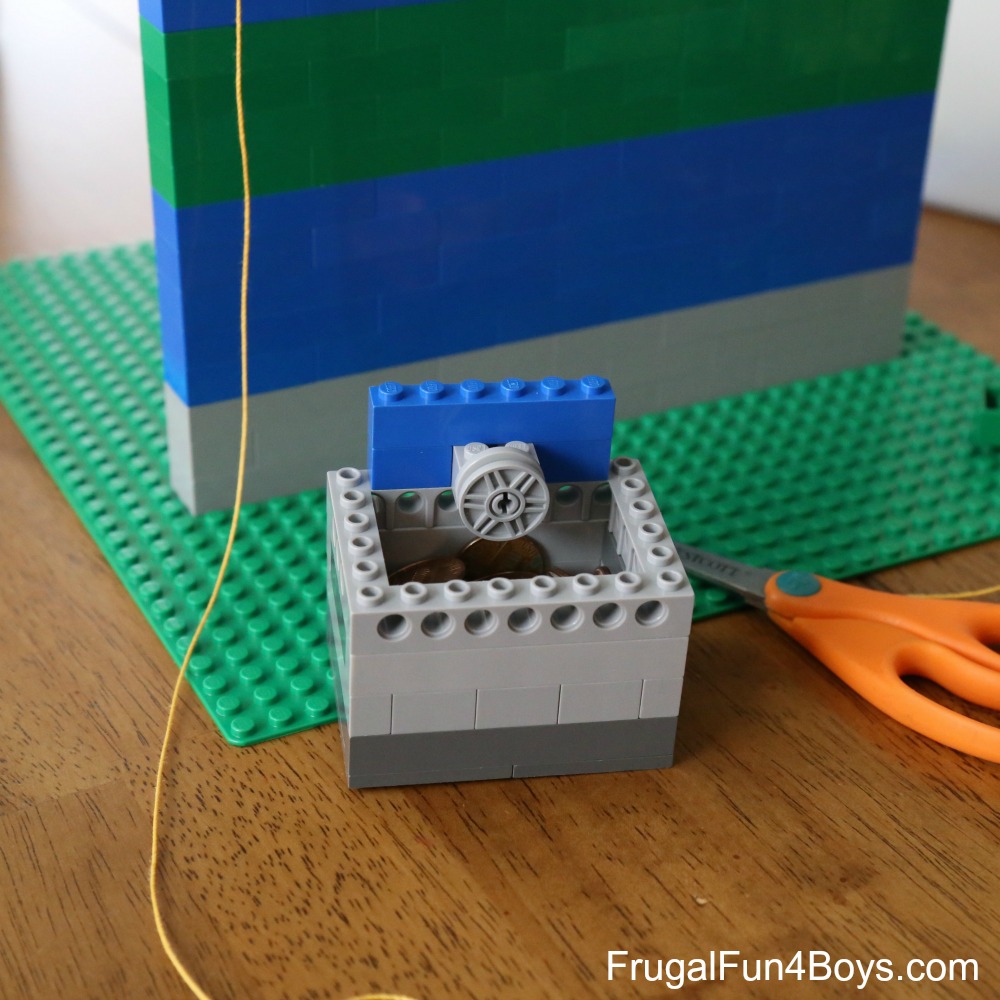 Then we needed something to attach the string to. I tried tying it to a Technic brick and it worked. We added more bricks around it, and the string held very securely. 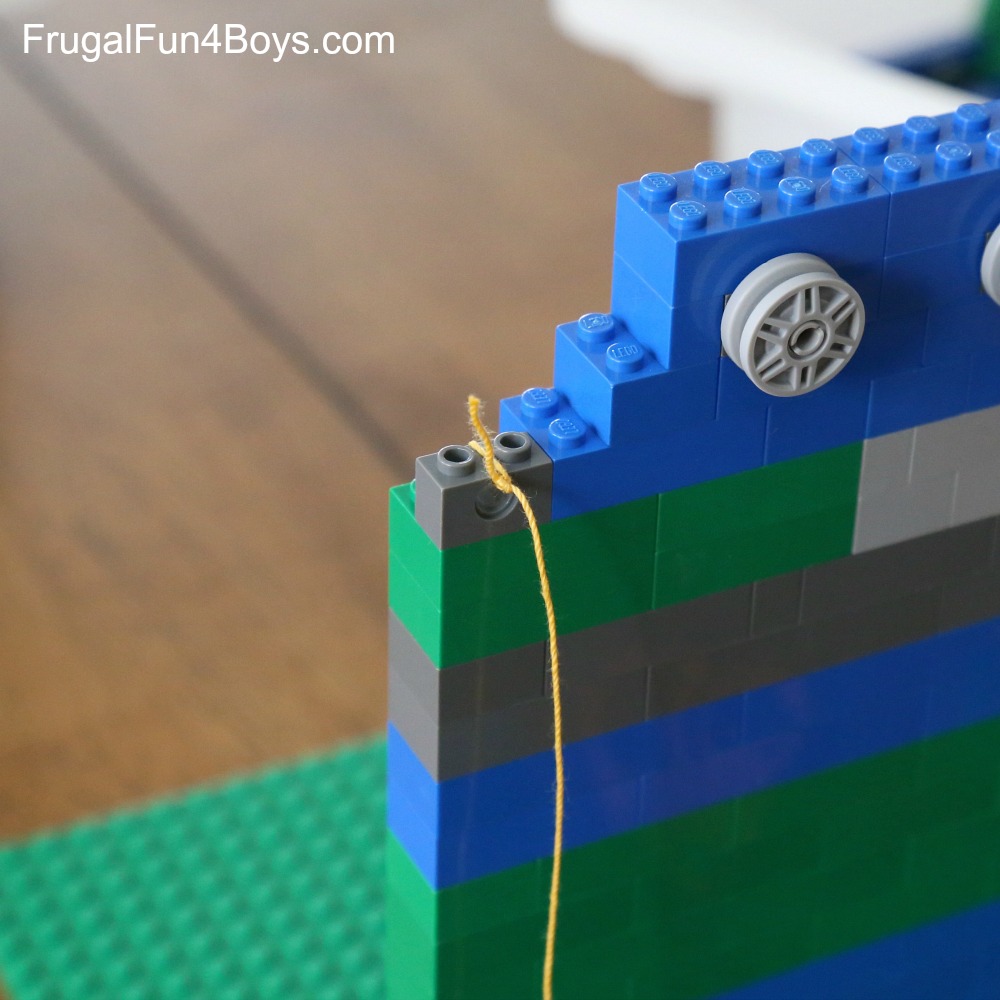 Then we were ready to lift with a double pulley system. This type of pulley system cuts the amount of force needed to lift the load in half. 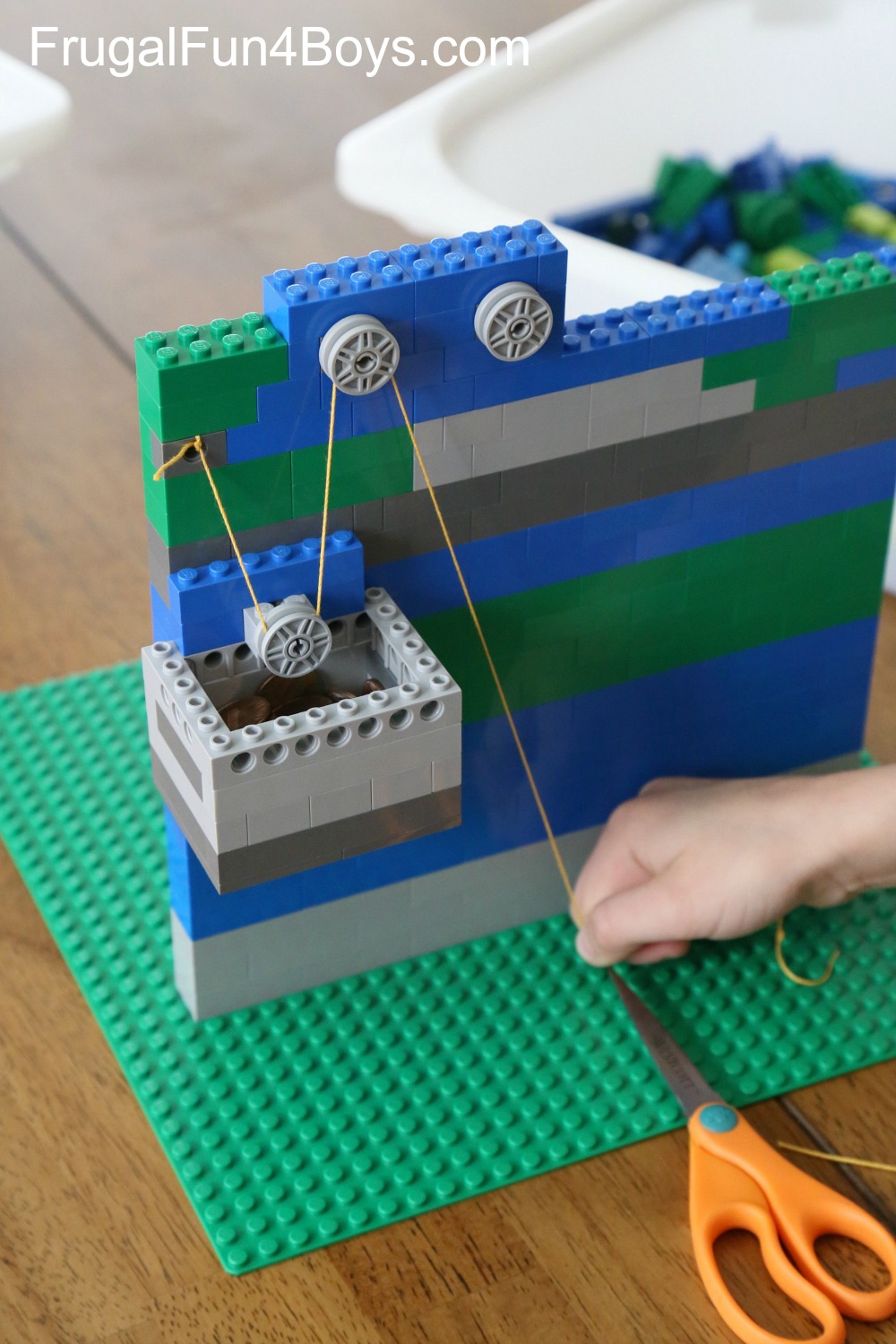 If you have a spring scale, you can measure exactly how much force is needed to lift the basket. You will need to tie the string to the spring scale. 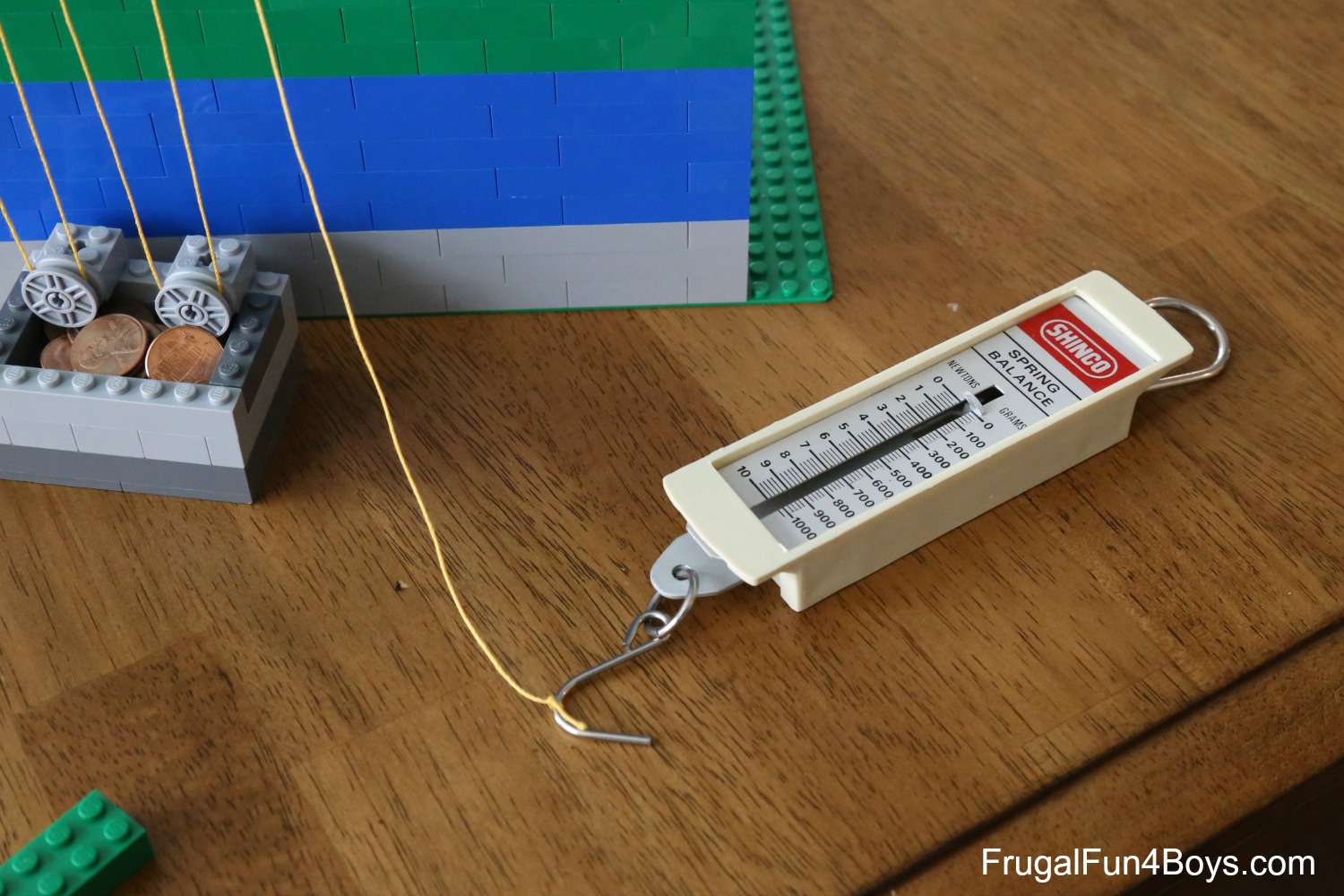 Aidan used the spring scale to lift just the basket full of pennies (no pulleys), and the scale read 2 Newtons. Then with our pulley system, it took 1 Newton of force to lift the basket. This fit exactly with what we read in our book – a double pulley system should cut the amount of force needed in half. 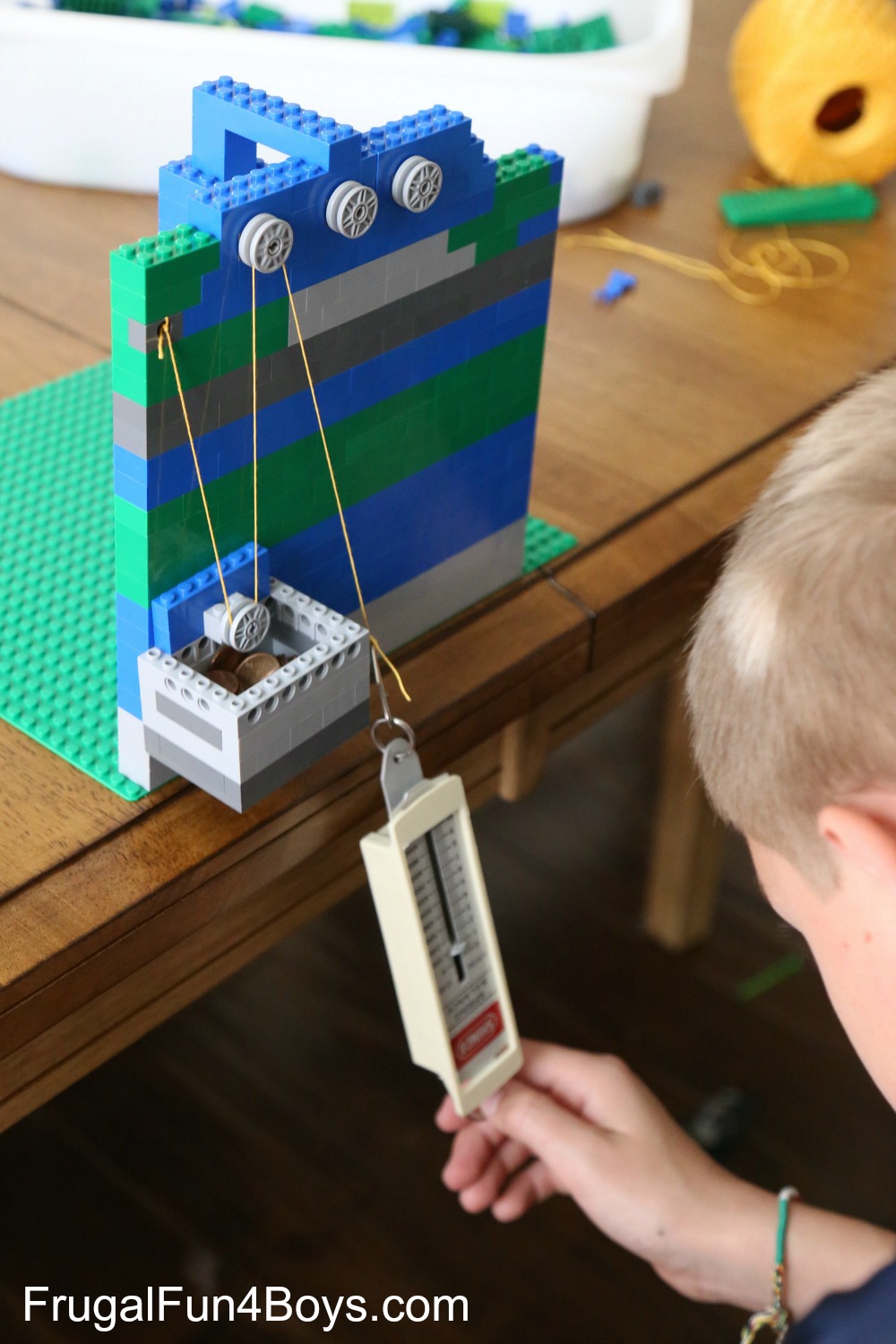 The younger boys were impressed! 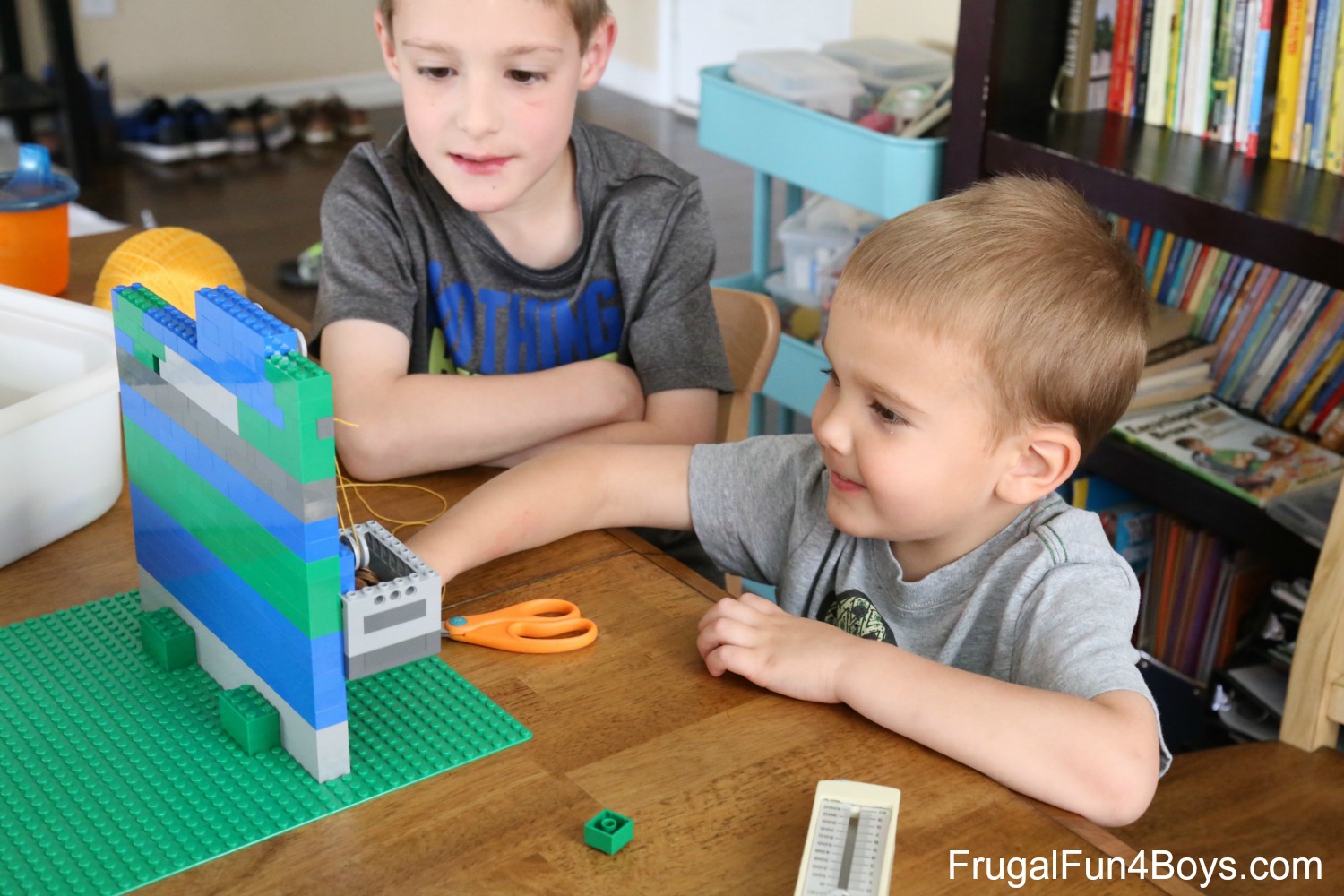 After that, we experimented with a four pulley system. Two of the pulleys need to be attached to the load. 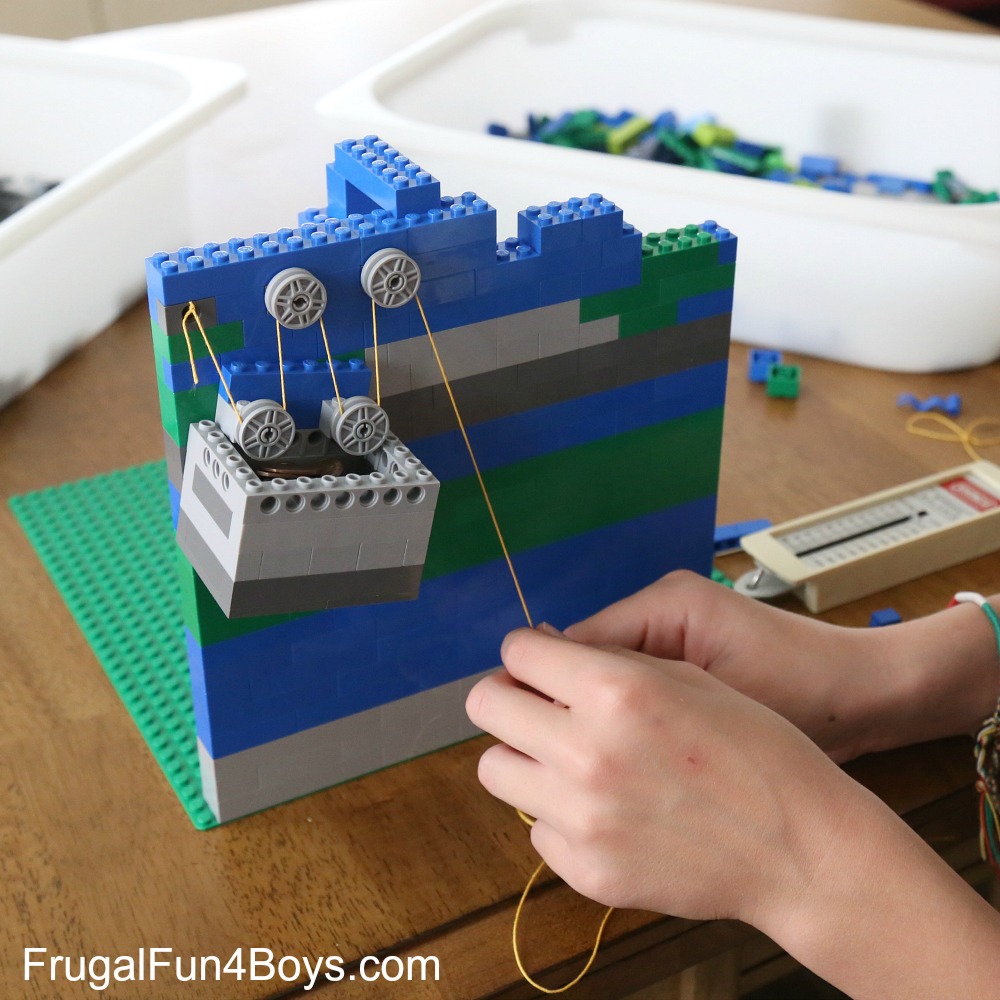 The set-up above should require 1/4 of the amount of force needed to lift the basket. We should have observed 1/2 Newton of force with our spring scale, but we were still seeing about 1 Newton of force. Our spring scale is not very exact, and I’m also wondering if it takes a burst of force to get the motion started (to overcome inertia and friction) and then the distance that we were lifting was not far enough to tell how much force was needed? I’m not sure. Anyway, we all agreed that the four pulley system felt much easier to lift!

Here is another way to arrange four pulleys: 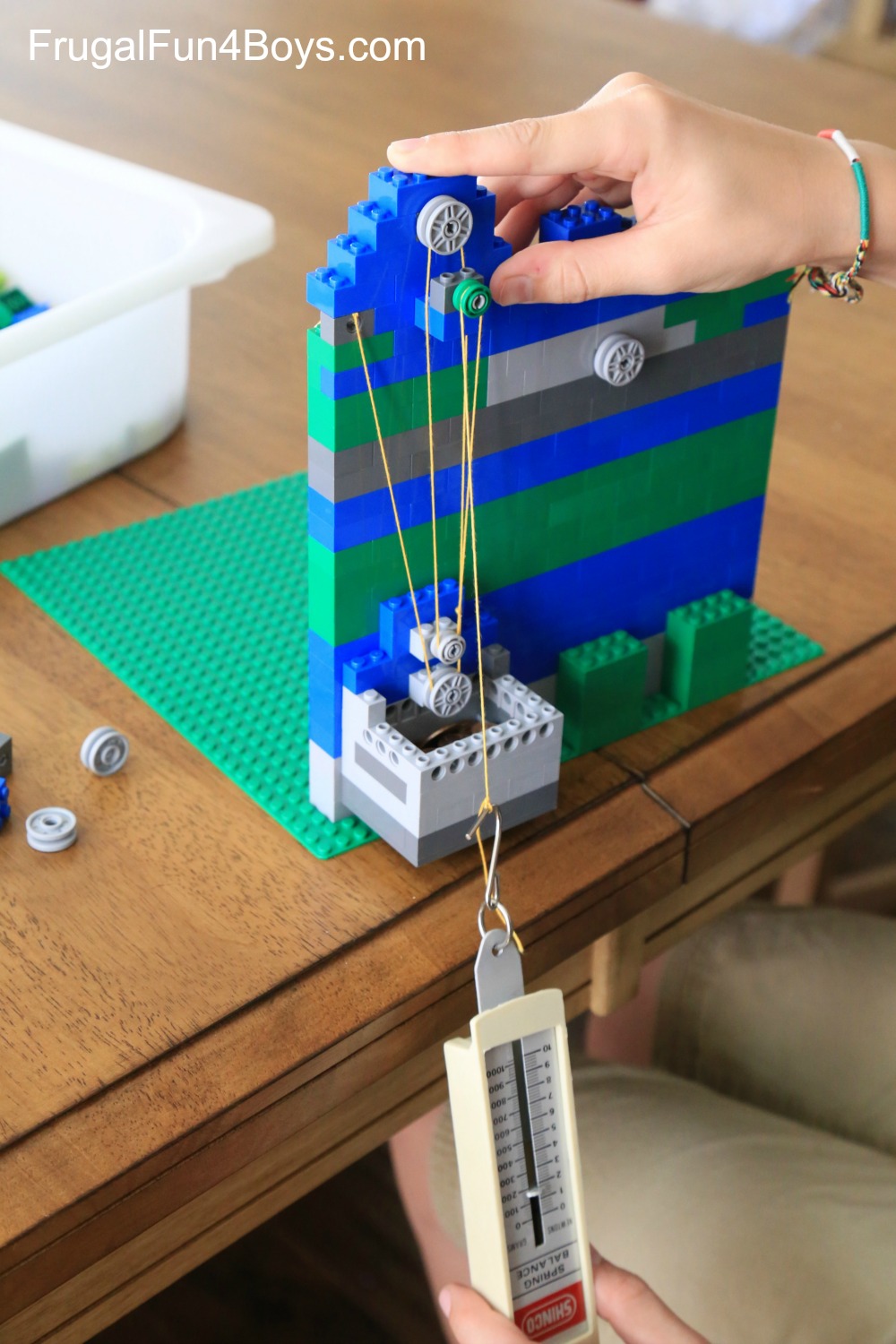 You can read more about how pulleys work here: Powerful Pulleys Lesson from Teach Engineering

Do your kids love tinkering and inventing? You can find this project plus 39 more in our new book – Genius LEGO® Inventions with Bricks You Already Have!

This book has step-by-step instructions for creating a wind-up catapult, a drawbridge, a transformer (robot to car), merry-go-round, drummer (that really plays the drums!), 3D marble maze cube, several robots, and so much more!

Pre-order here, and your copy will arrive on the release date of November 13, 2018: Genius LEGO® Inventions with Bricks You Already Have 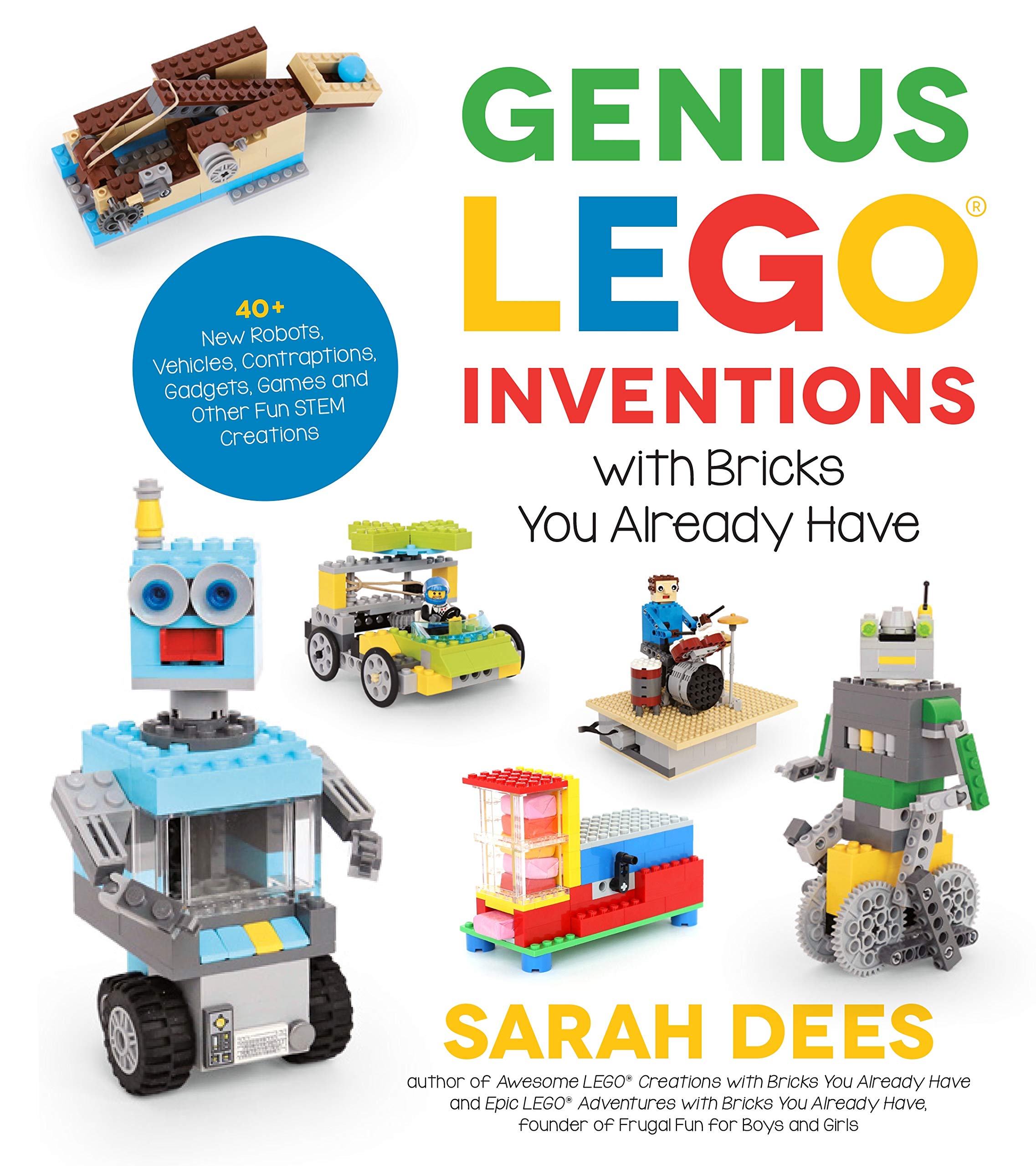 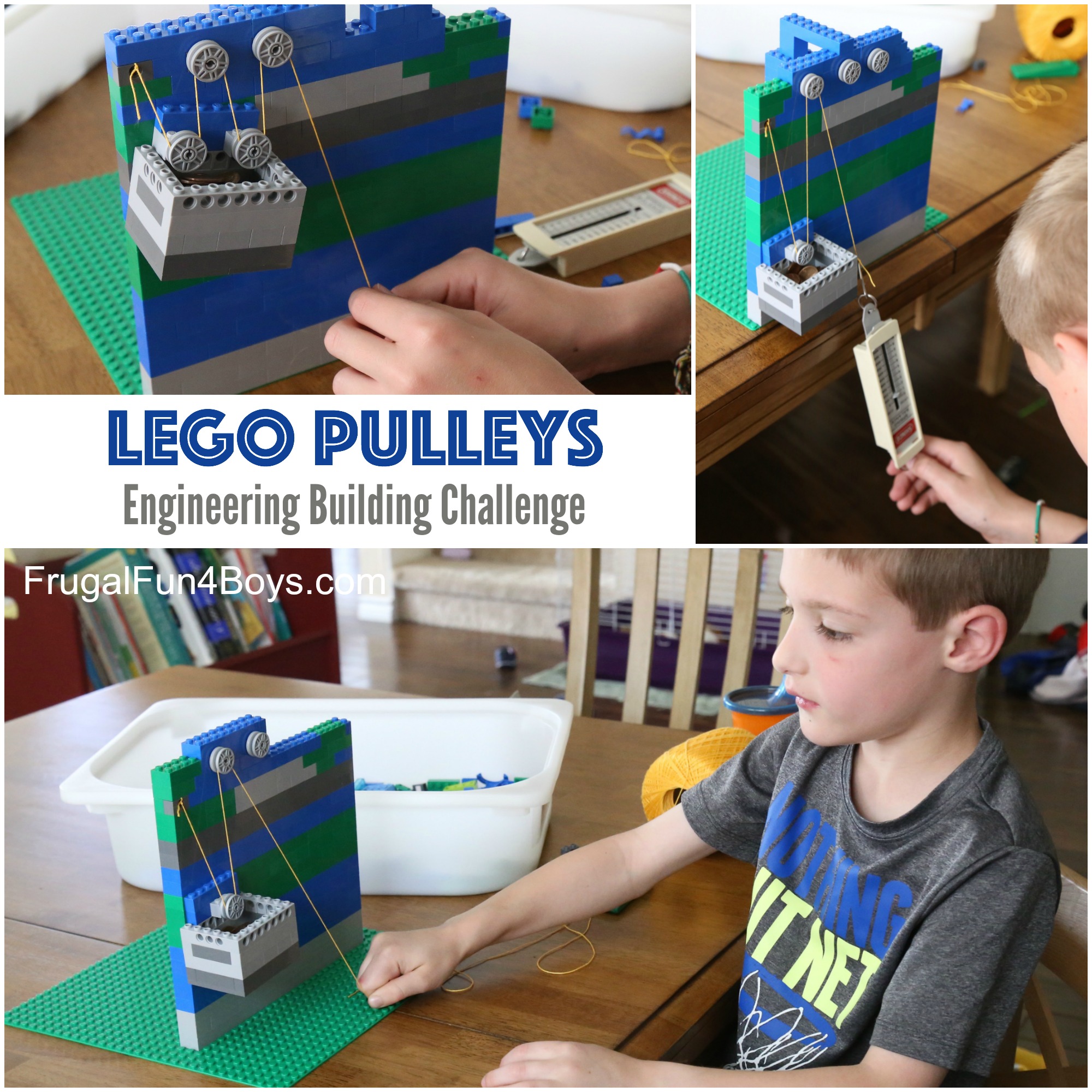