Get ready to hear some cheers – when your kids find out that math time is going to involve running and throwing snowballs, they’ll be jumping up and down!  Seriously, the games in this post are perfect for burning off some energy indoors on a cold day, and kids will be learning their addition and subtraction facts at the same time. I’ve included some counting games too, so that preschoolers can participate as well. 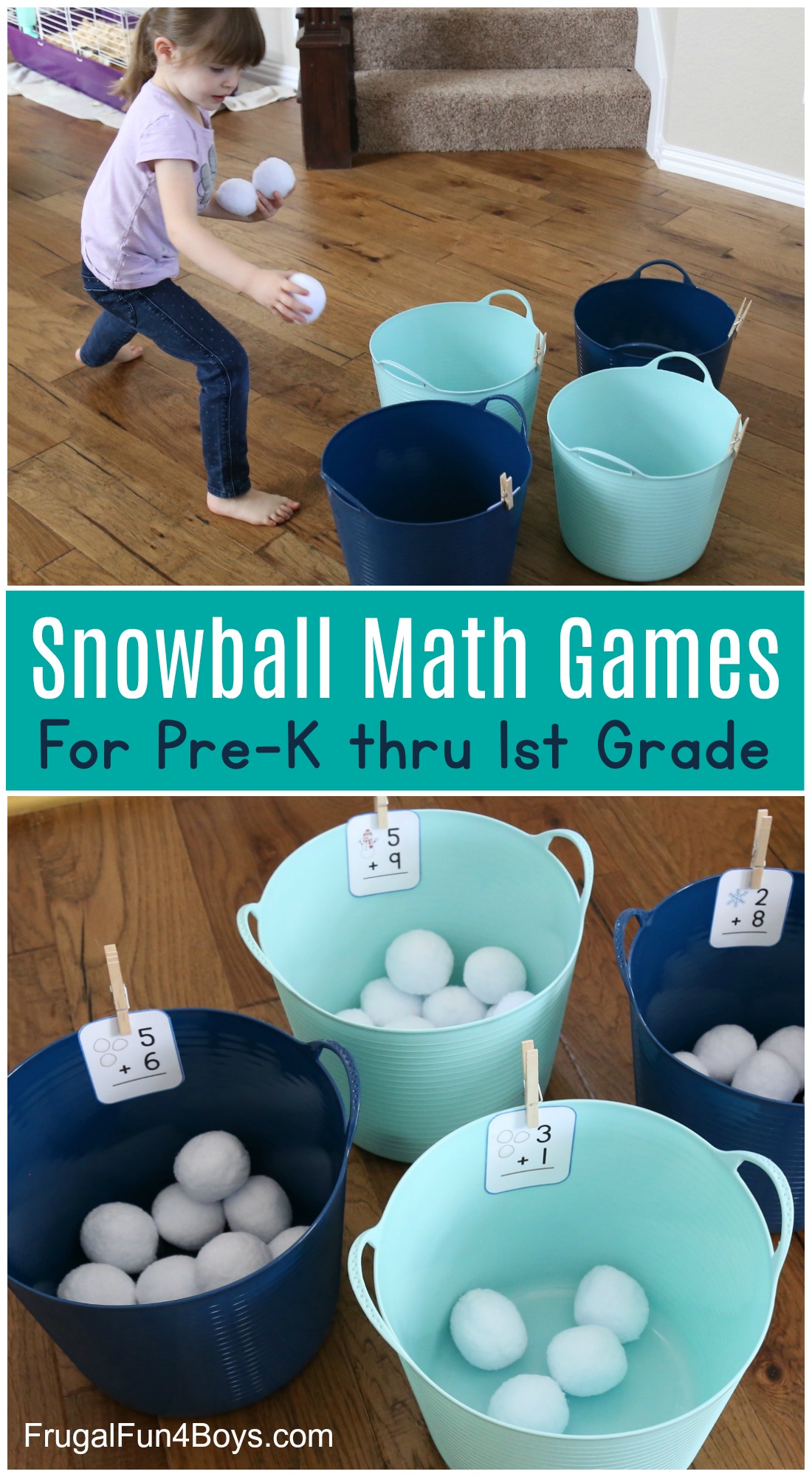 The games in this post use Snowtime Anytime plush snowballs. I was curious about them, so I ordered a 40 pack. (The reviews were good, so I thought – why not?) Well, I love them!  When you squeeze them, they sort of crunch like a real snowball, except that they are soft and lightweight. They are hard to describe, but so cool!  And safe for indoors.

If you don’t want to buy the snowballs, socks would work really well!  Fold a pair of socks so that one is wrapped around the other in a little ball. I also think that jumbo white pom pom balls would be a great option.

The plastic baskets came from Hobby Lobby’s new spring collection.  They were only $4.79 each, and I can tell they will be useful for lots of stuff.  Again, if you don’t want to buy baskets – use laundry baskets or something else from around the house.

All the game cards can be printed at the bottom of this post.

Print the addition cards from the file at the bottom of this post. I would recommend printing them on card stock if you want to use them several times. 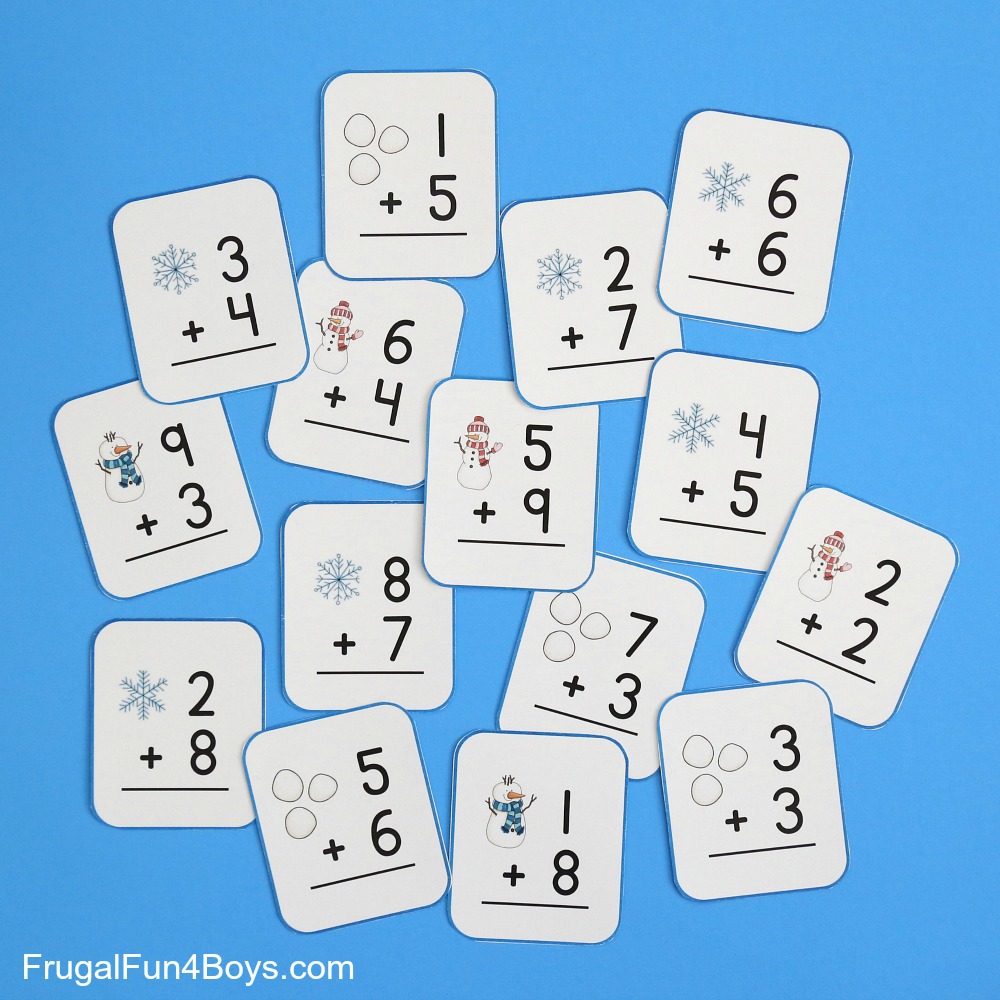 Use a clothespin to attach the addition cards to your snowball containers.  We set up four addition baskets per round. 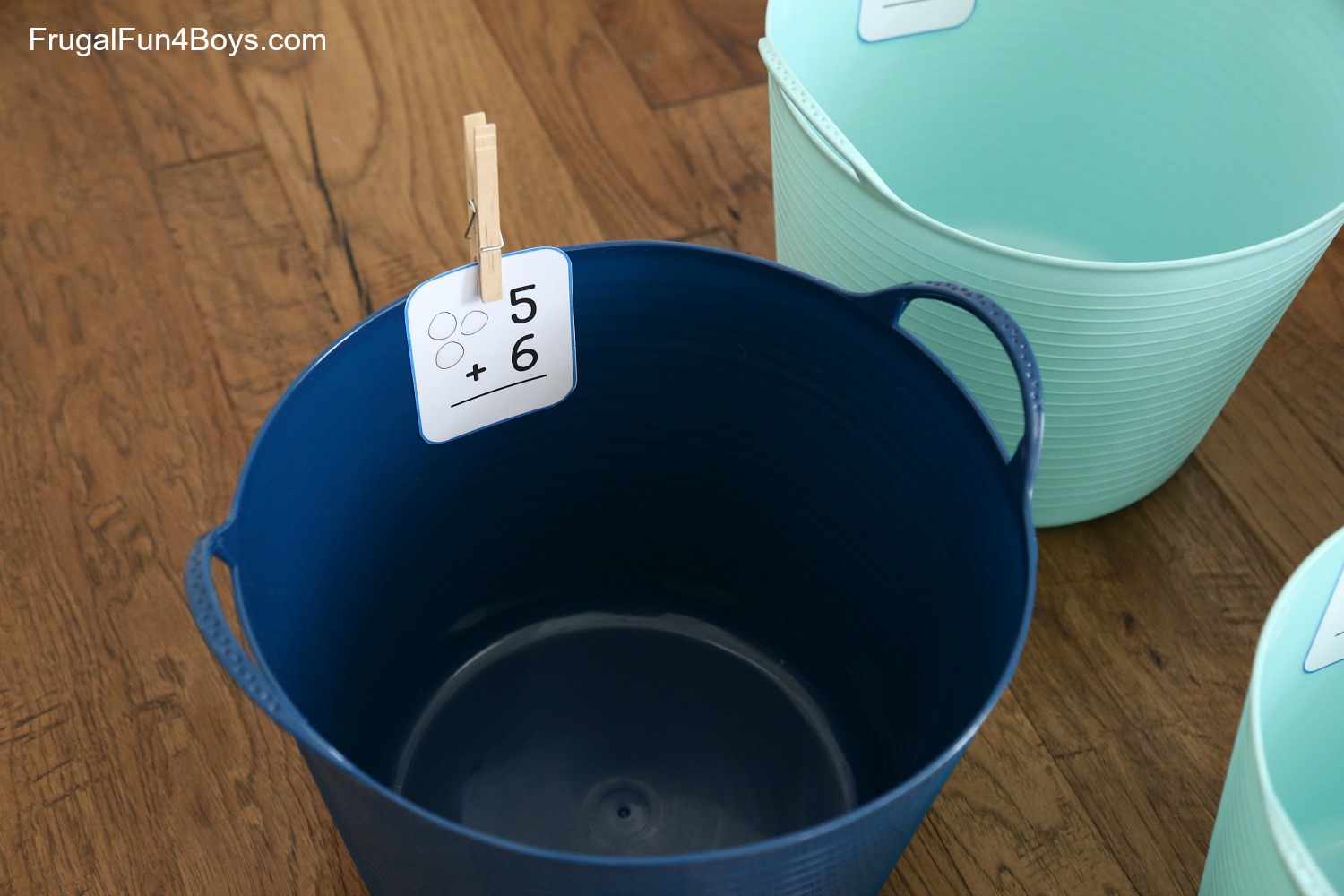 Place a basket full of snowballs at the other end of the room. 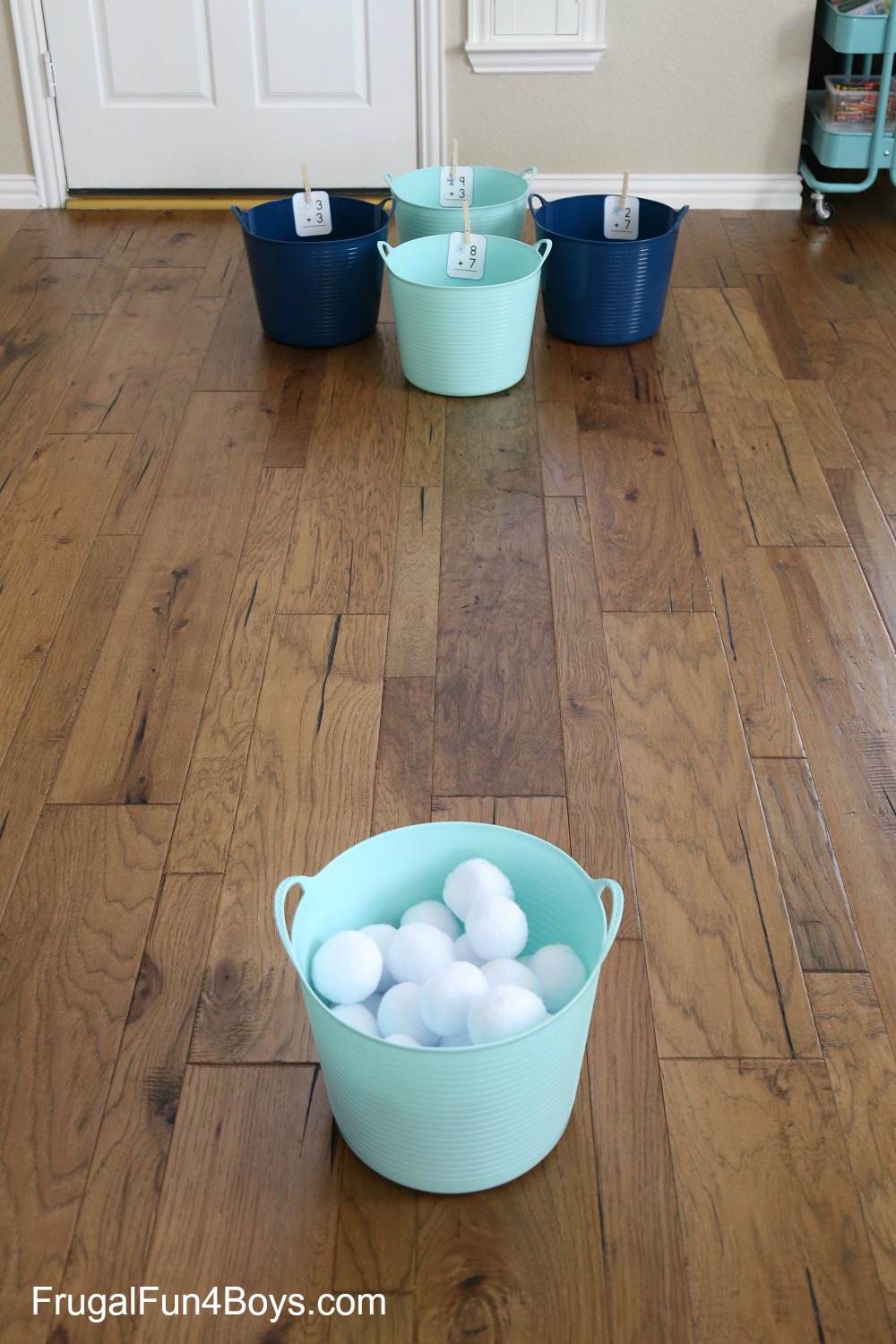 The object of the game is to quickly fill the baskets with the correct number of snowballs. We put a limit on carrying 2 or 3 at a time. Otherwise the kids spent all their time trying to carry 10 at a time, and then had trouble getting them into the baskets without dropping them everywhere. With a class, I would definitely set a limit – carry only 2 or 3 at a time!

It’s fun to time them – how fast can they make all four sums? 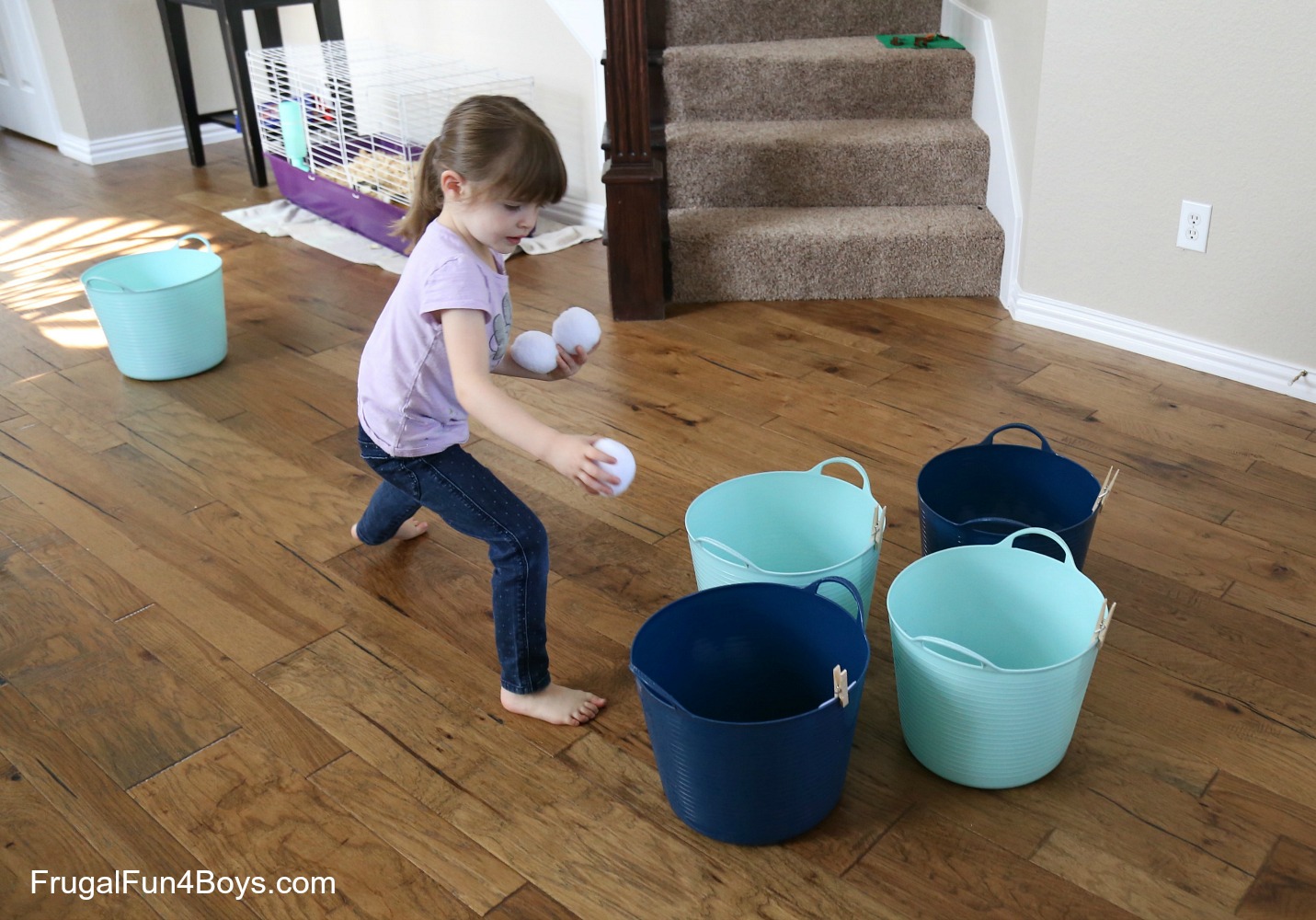 TIP:  Make sure that the addition fact cards you choose for each round do not exceed the total number of snowballs that you have!

If you’re doing this with a class and want to quickly switch between rounds, I’d recommend sorting the cards by sums greater than 10 and sums less than 10. Then you can make sure that you don’t grab all cards with large sums and run out of snowballs. 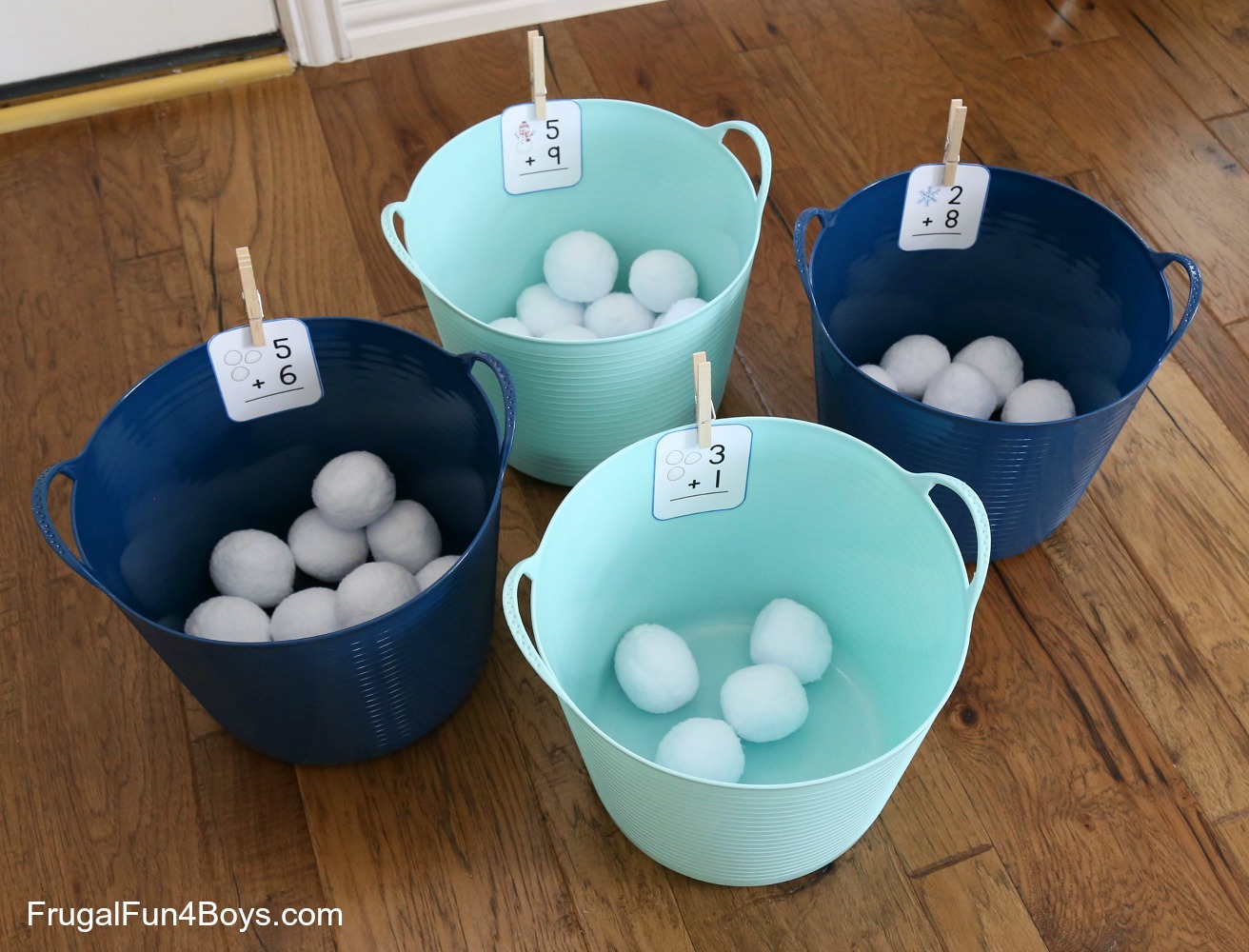 I also have a set of 42 subtraction cards to print (in the same file).  I did all the subtraction facts from 10 minus a number and higher. Did you know there are a LOT of subtraction facts?  Well, there are tons. So I skipped the easy ones (7 – 3, 5 – 2, etc.) and did the higher numbers only. 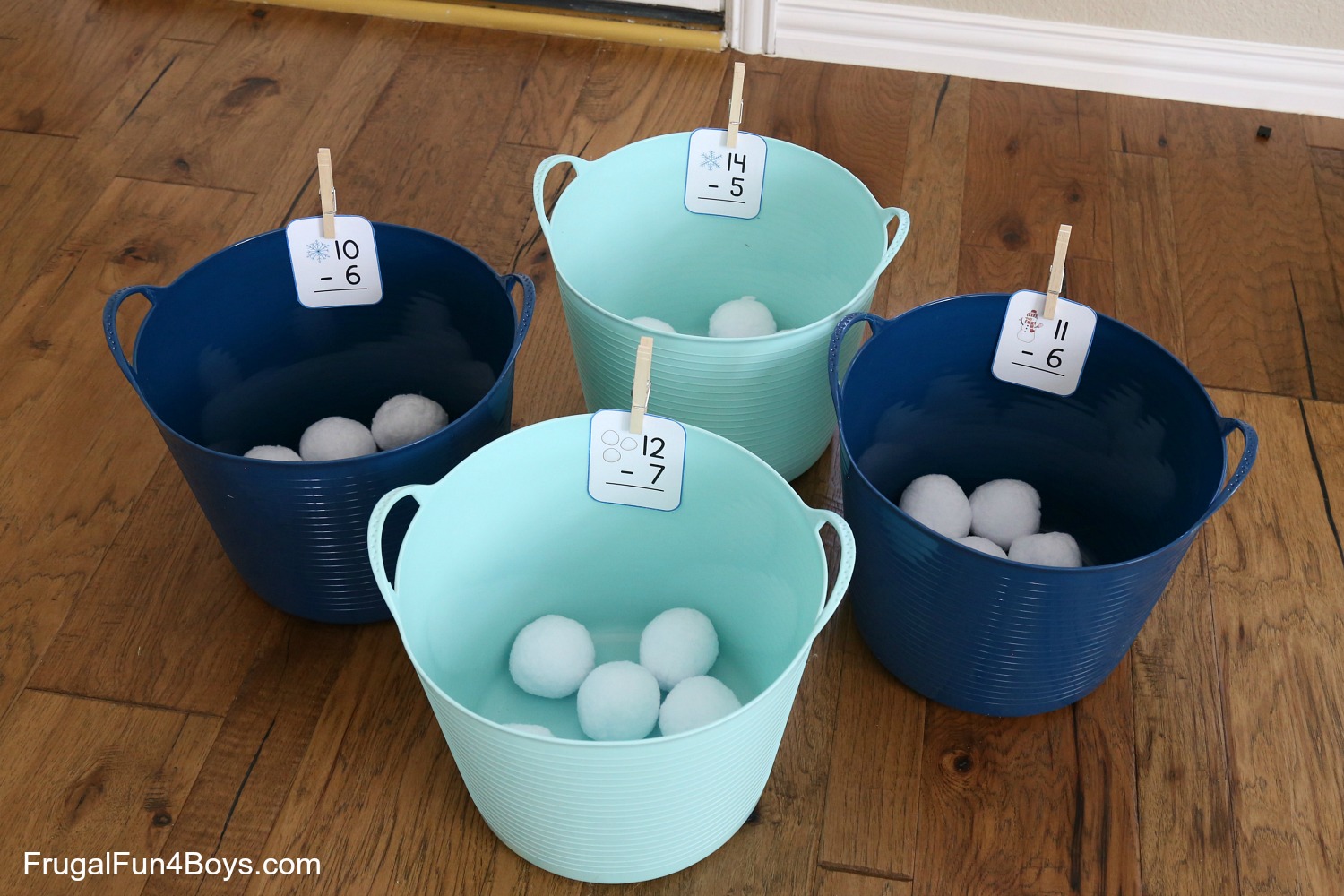 Janie could not WAIT to get her hands on the snowballs, and the addition cards were too hard for her (I made them for Jonathan). So I made a set of cards with numbers only. You can print the numbers 1 – 24.

The fact that I had told the kids to only grab 2-3 snowballs at a time ended up having an academic benefit! After putting 2 snowballs and then 2 more into the basket labeled “11,” Janie had to figure out how many she had put in and how many more snowballs she needed to grab.  It was a very beneficial activity for learning to count on from a number, and Janie stuck with it a long time! 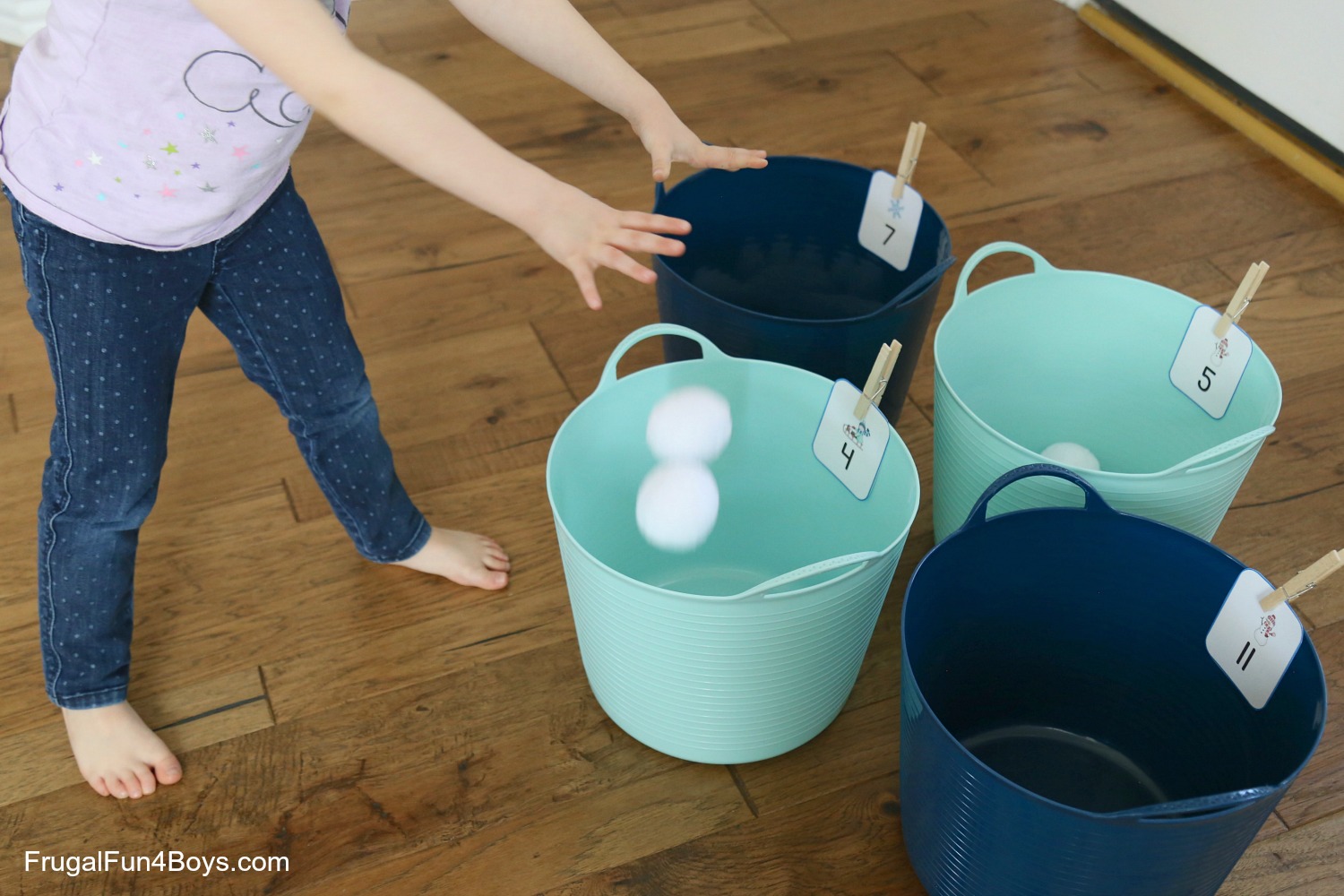 Use the single number cards or any of the other cards to do a snowball toss game. Kids can try to toss the correct number of snowballs into each basket. 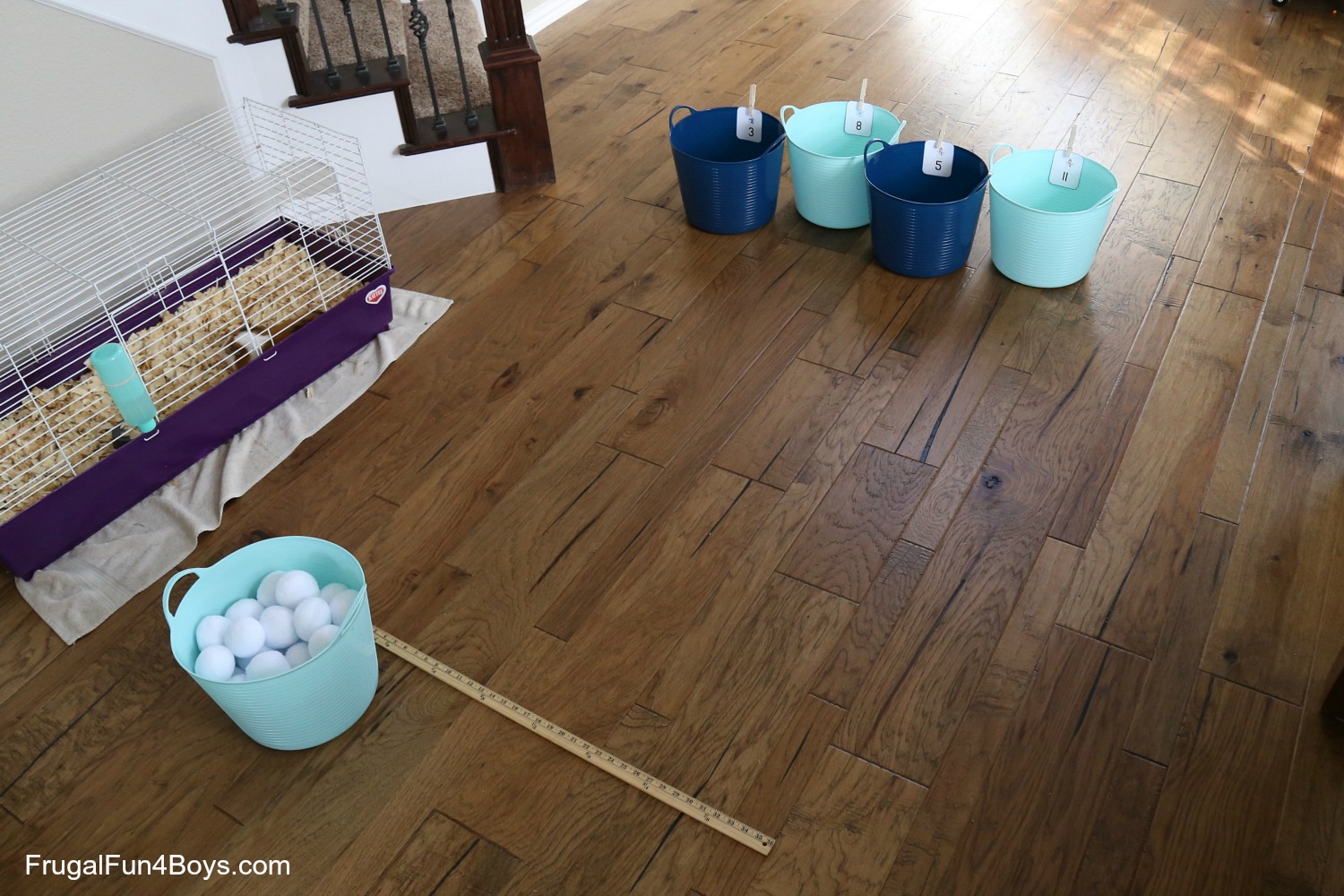 This is such a great way to burn off energy! And great for hand-eye coordination too. We realized that we need more practice on things like this… 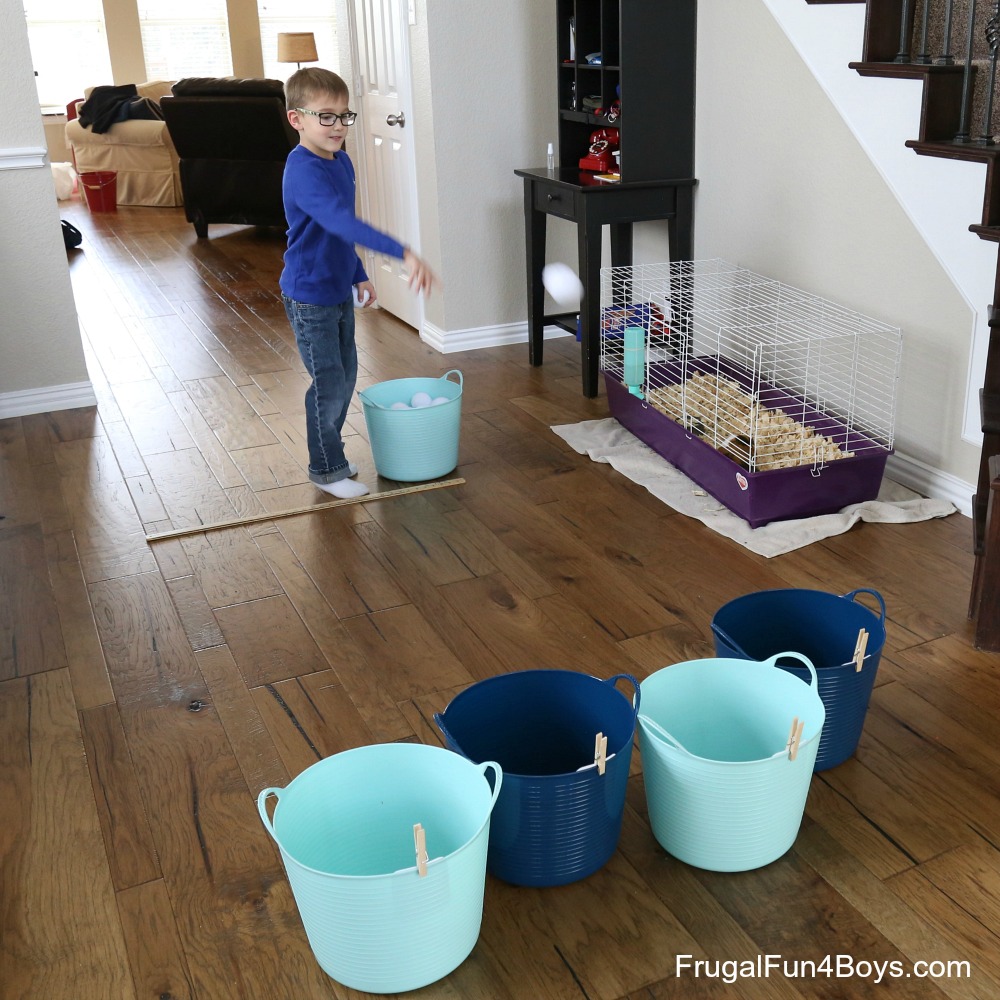 Our final game requires kids to look at how many snowballs are in the basket and then figure out how to make it another number instead.  Let me explain…

This is a great game for developing mathematical thinking!  You can encourage them to go ahead and think about the math sentence involved.  If there are 8 snowballs in the basket and the card says “Make it 5,” they’ll need to remove 3 because 8 – 3 = 5. 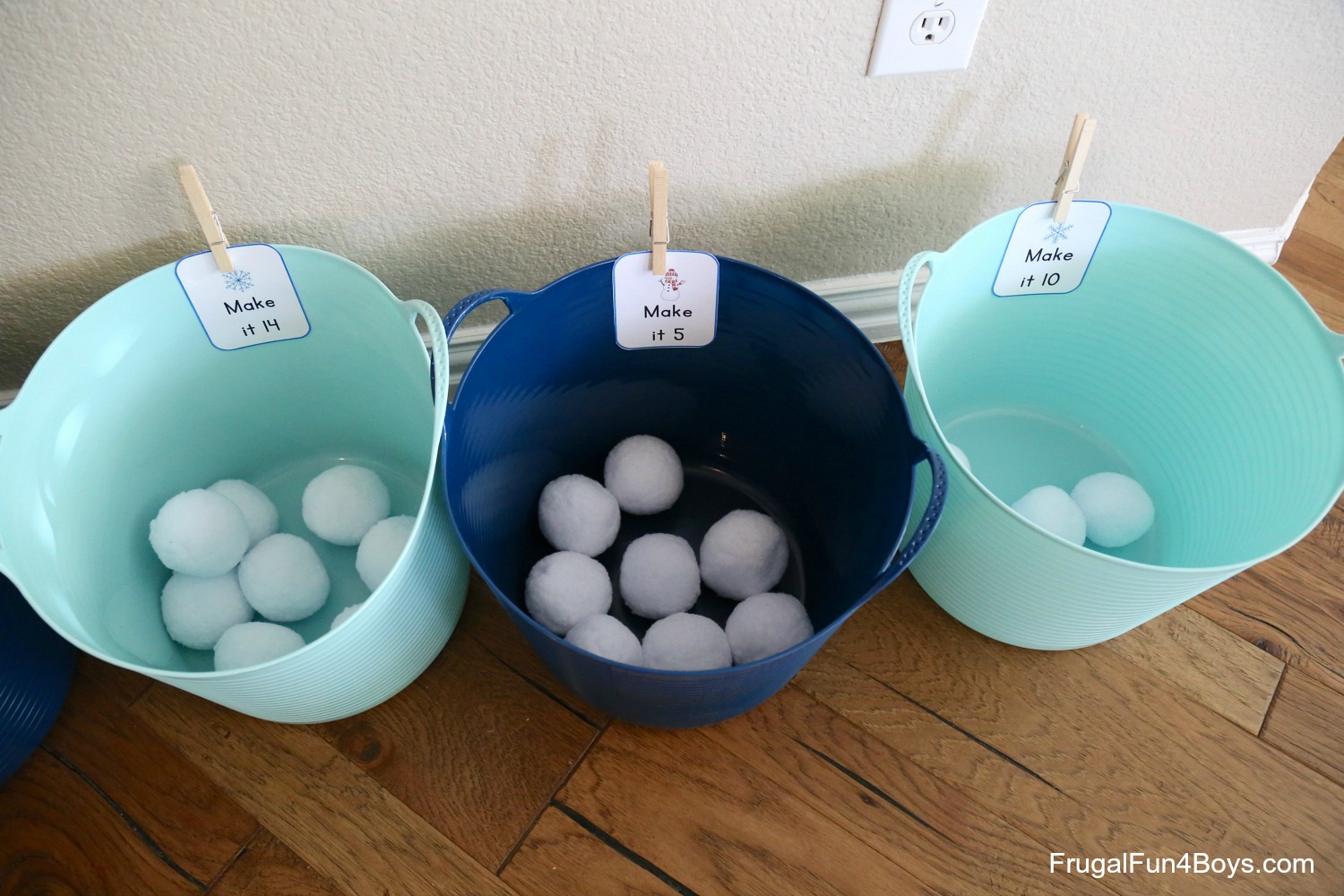 Here’s what’s in the file:

Click the link below, and the file will open. You can either save the file or print from there.  You’ll probably want to select the pages you want to print, as the complete file is 24 pages and you may not need it all. 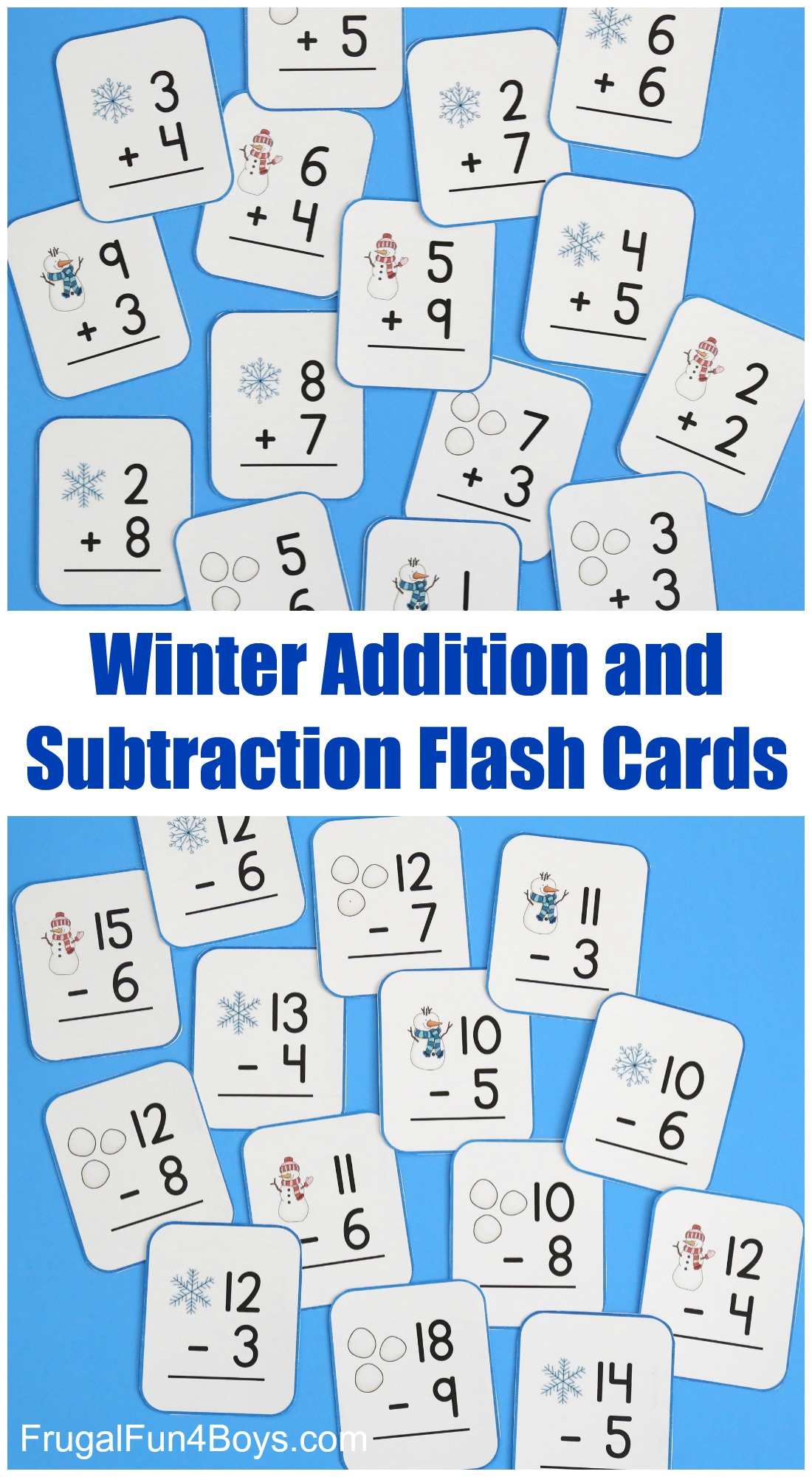